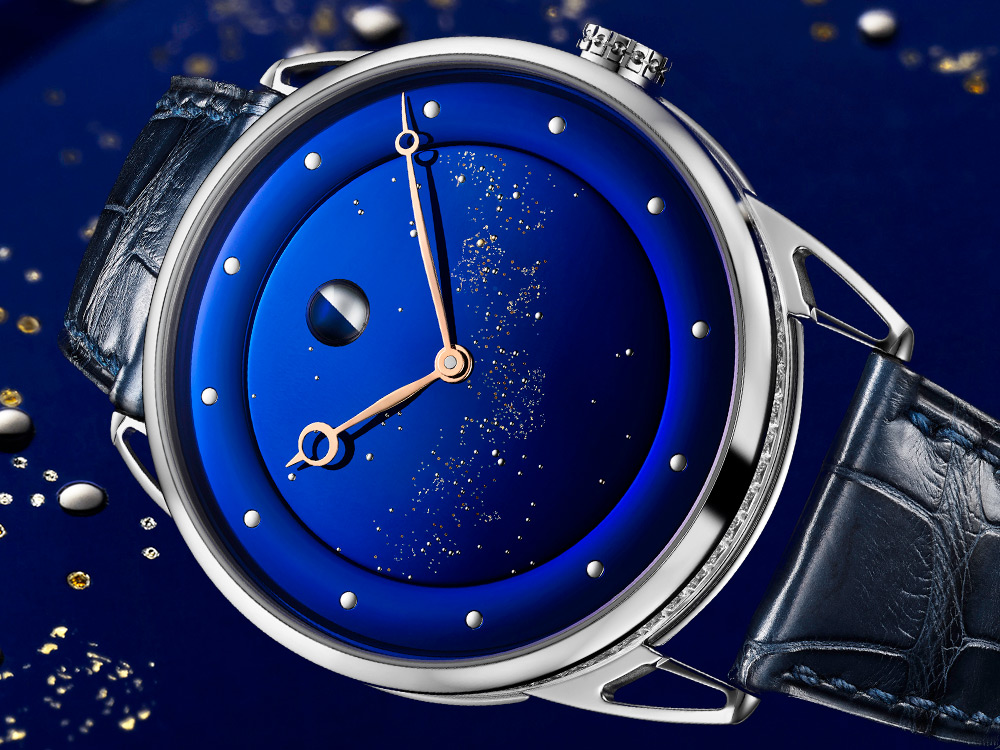 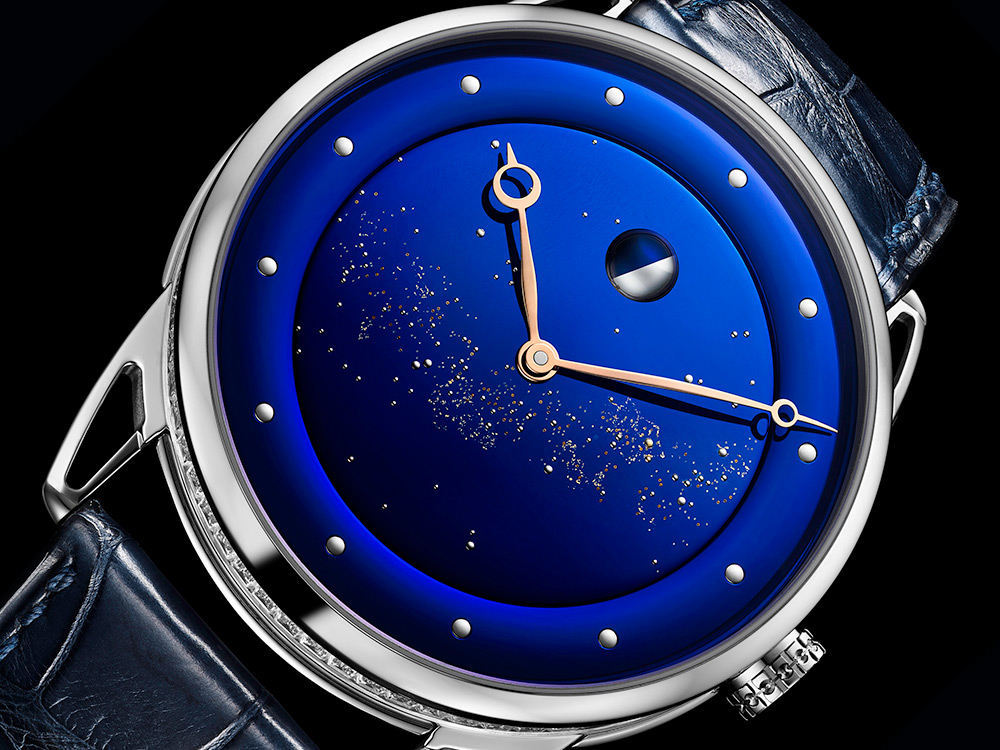 The Milky Way is estimated to contain somewhere in the range of 100-400 billion stars, and an estimated 100 billion planets. Swiss luxury watchmaker De Bethune‘s DB25L Milky Way interpretation of the beauty and massiveness of the galaxy that we inhabit is on a much more measurable scale, but to high-end watch aficionados, it is no less arresting in its ambition. 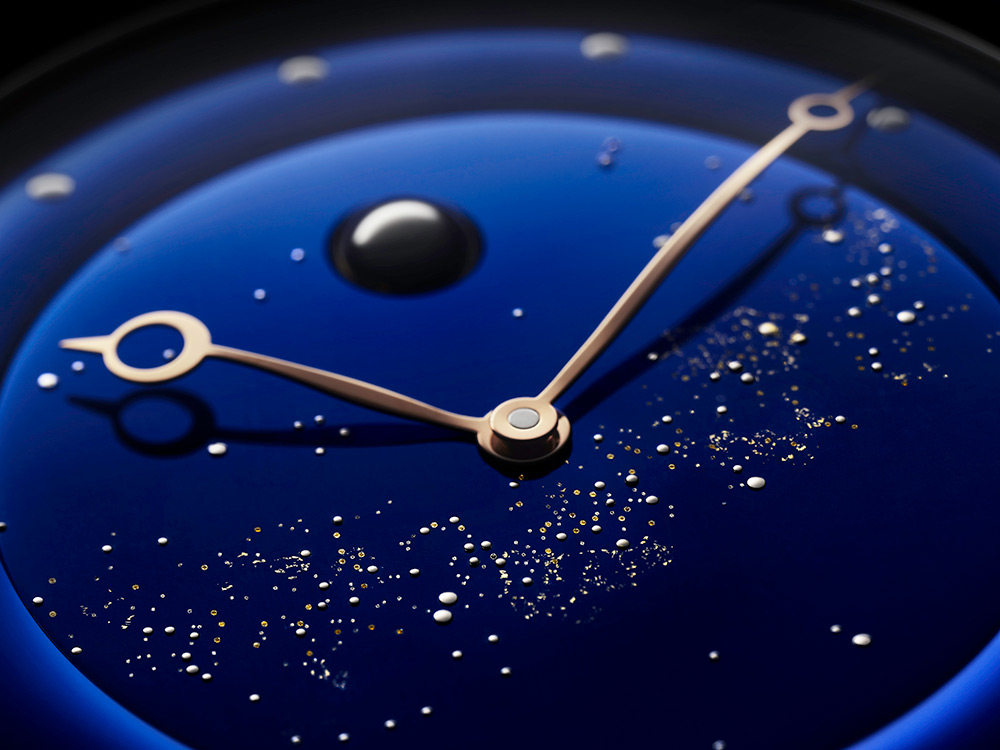 The De Bethune DB25L Milky Way is cast in platinum with 66 baguette-cut diamonds in the bezel, contrasting the richly heat-blued titanium dial where the representation of a small fraction of our galaxy’s many stars have been both pinned by hand, and laser-engraved in gold leaf. The end result is a spectacular, albeit considerably pared-down celestial map that neatly complements the watch’s spherical moon phase indicator at 12:00. 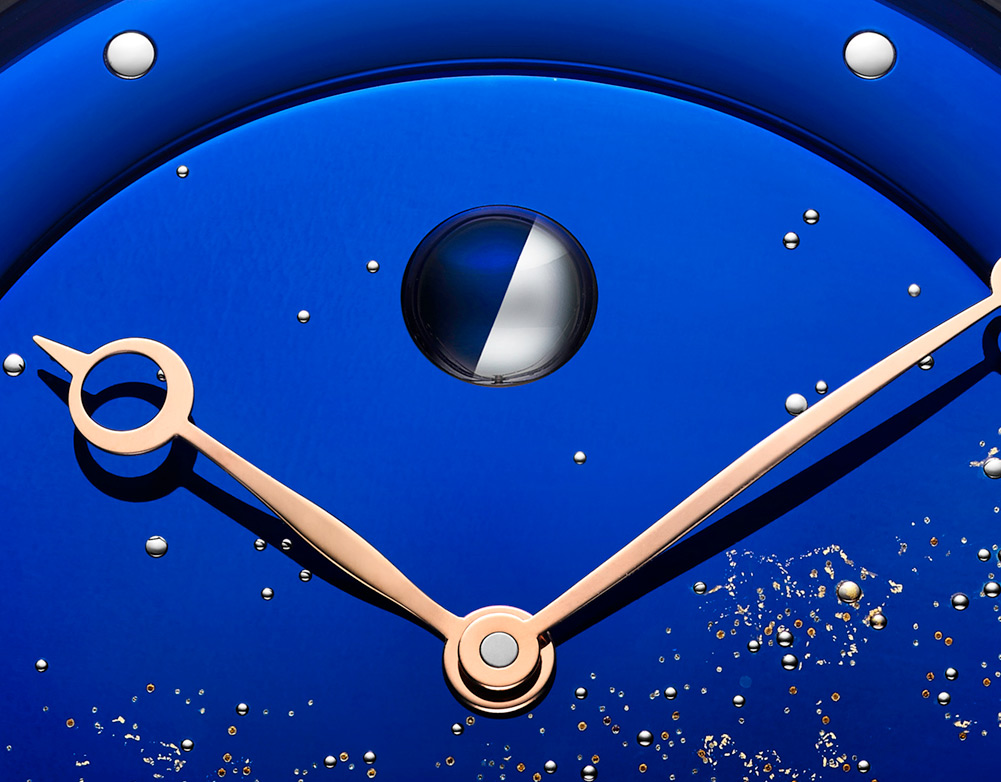 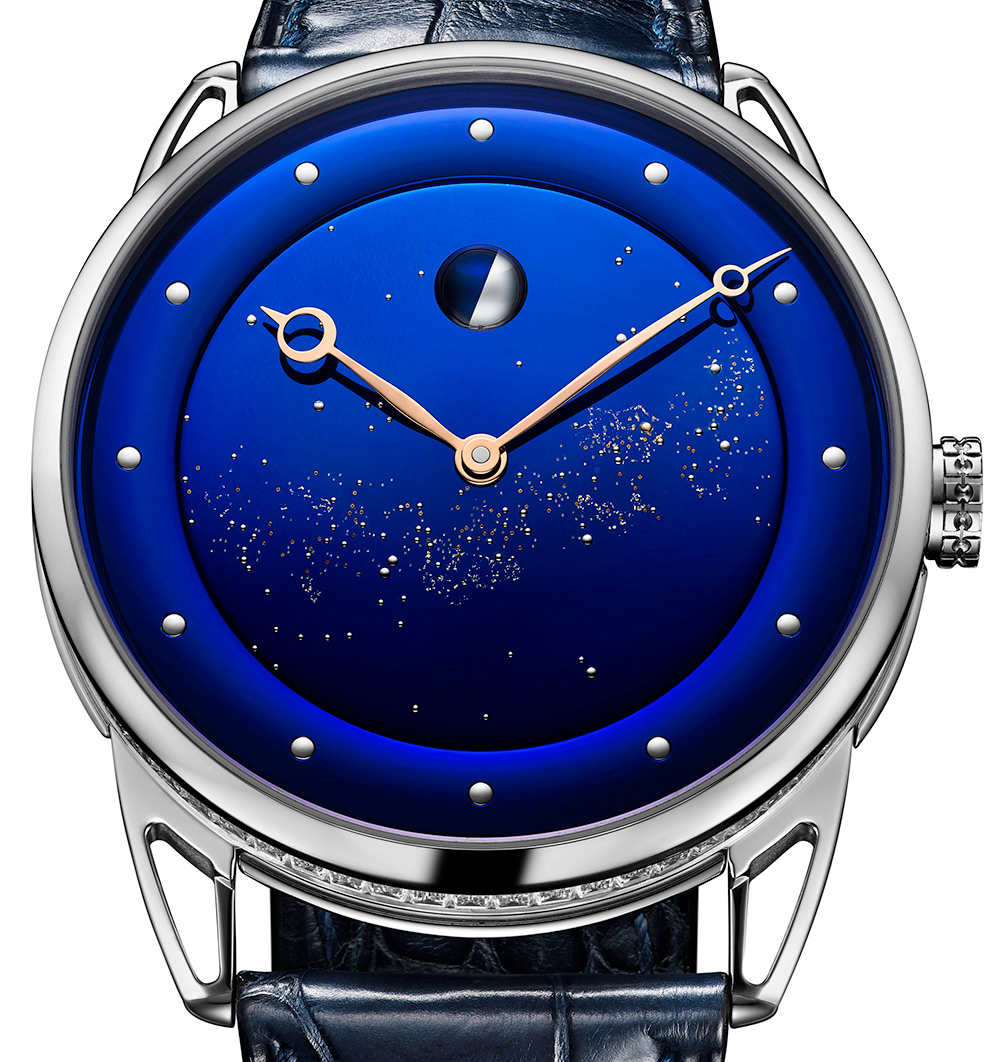 If you’ve seen De Bethune’s “Kind of Blue” Tourbillon that we recently went hands-on with here, you already know that absolutely nobody does blue quite like De Bethune. Those incredible hand-finishing techniques return with the De Bethune DB25L Milky Way, which deploys the same heat-blued, and mirror-polished titanium to spectacular effect – though this time, only for the dial. It’s a fitting backdrop for the galaxy – a dynamic, iridescent night sky that takes on markedly different hues depending on the viewing angle. Set into that dial are twelve spherical white gold hour indices, and a three-dimensional moon phase indicator made from palladium and matching heat-blued stainless steel. 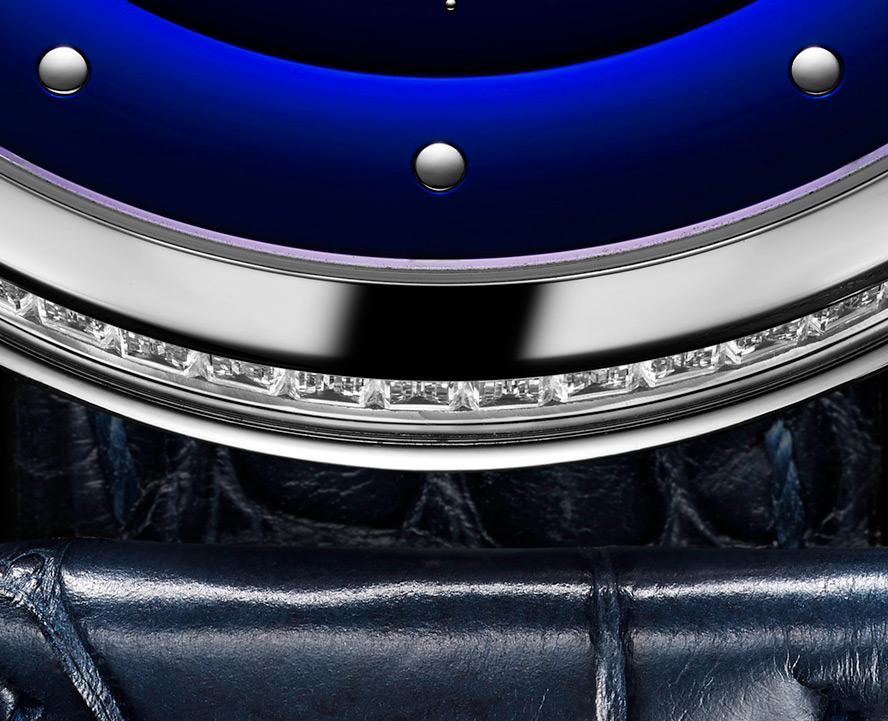 The diamonds in the caseband feel like an odd choice – though impressive, they distract from the otherwise cohesive design language by deviating from the astronomy theme. For collectors who happen to like both De Bethune and diamonds, though, this might be just what they are looking for. The time display is finished with polished rose gold pomme-shaped hands, which perfectly match the laser-engraved gold leaf “Milky Way” spanning the dial. 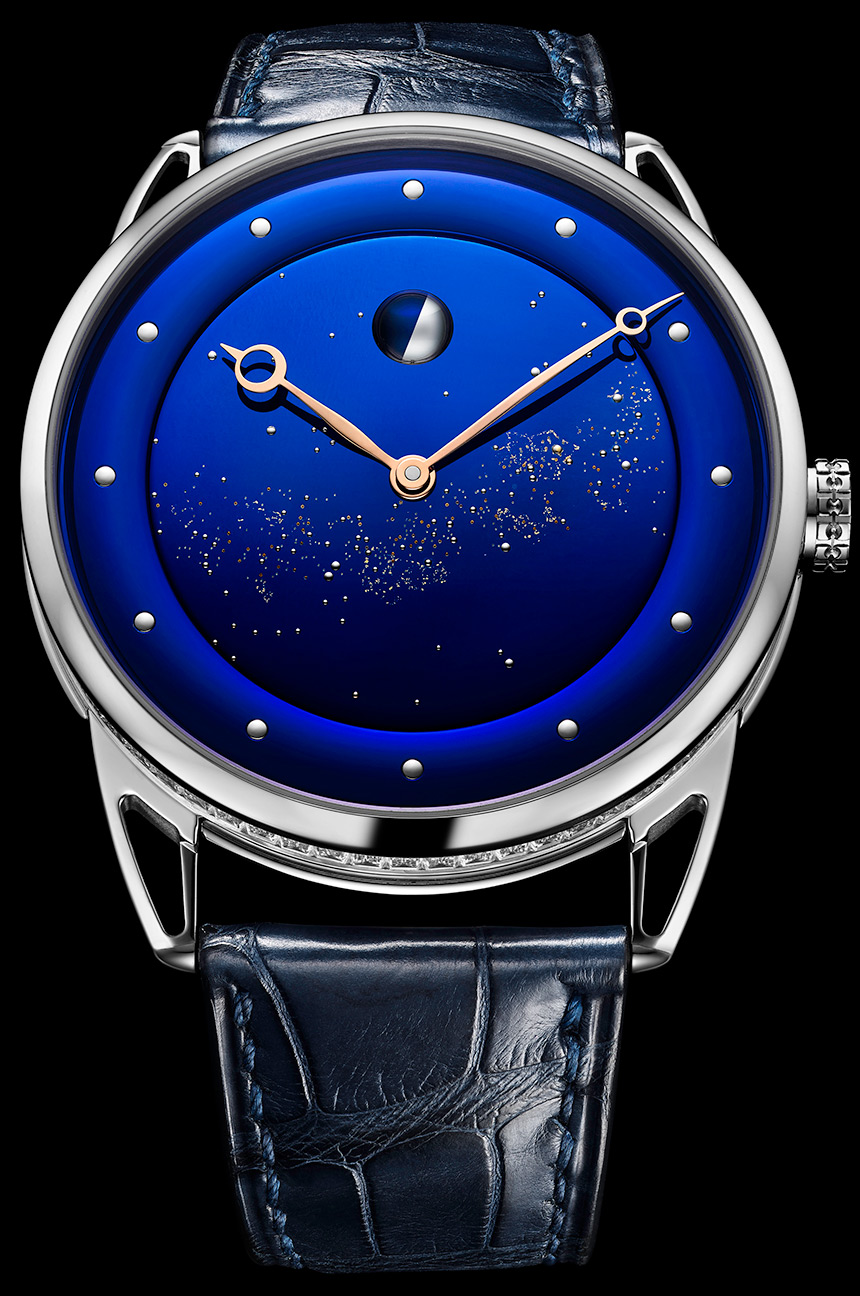 The Milky Way is a fitting canvas for De Bethune’s case and movement architecture, much of which seems to garner inspiration from Star Trek and beyond. And while the actual Milky Way has a diameter spanning between 100,000 and 180,000 light years, the De Bethune DB25L Milky Way measures a much more wearable 44mm wide by 11mm thick. 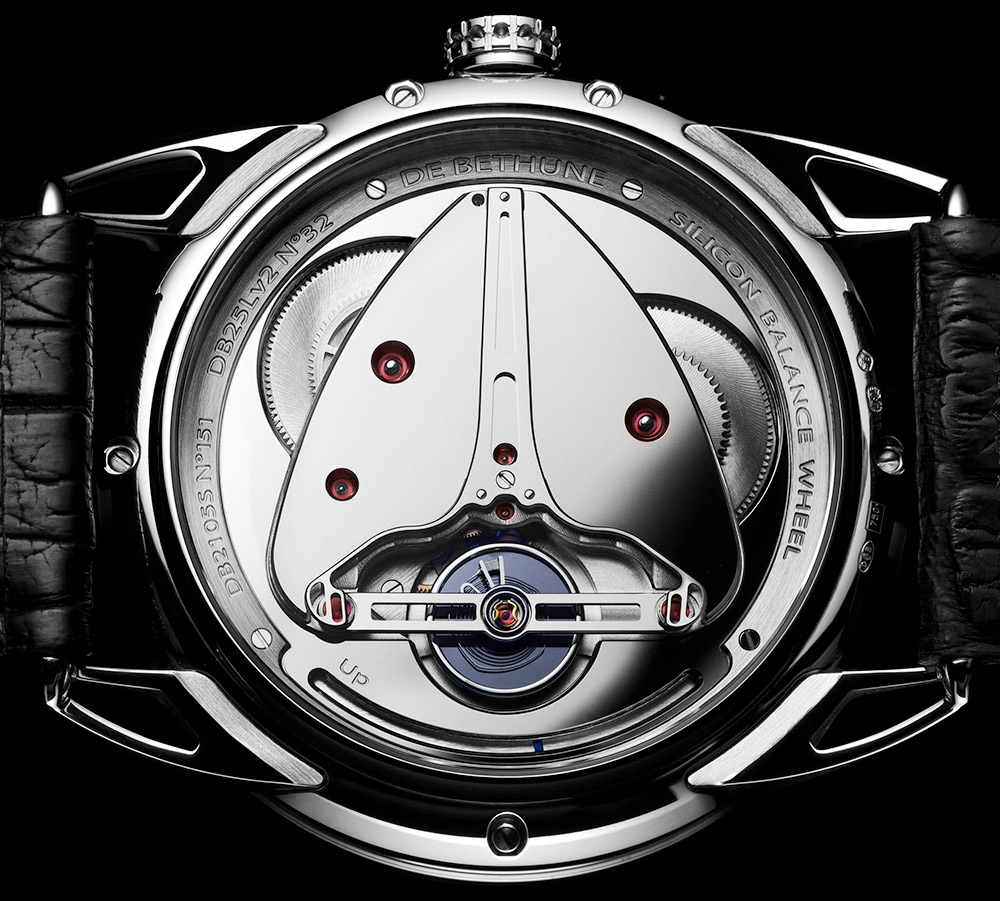 It is powered by De Bethune’s DB2105v2 hand-cranked movement whose lengthy 6-day power reserve is enabled by a self-regulating twin-barrel mainspring. Look closely, and you’ll notice De Bethune’s signature white gold balance wheel with a silicone core. At any rate, the Milky Way’s generous reserve comes especially in handy, as its patented moonphase complication is accurate to within a single lunar day every 122 years.

Those looking to boldly go where no collector has gone before can add the De Bethune DB25L Milky Way to their wrist for a price of 225,000 CHF when it becomes available later this year. debethune.ch