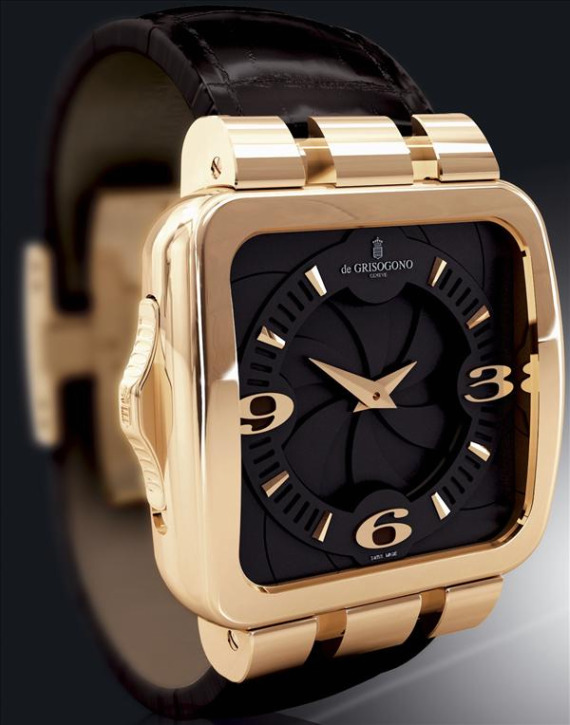 From one of the coolest and quirkiest luxury watch makers around, de GRISOGONO, comes the Fuso Quadrato watch for 2009. Aside from the interesting shutter-style complication the watch looks pretty stylish in its 47mm 18k pink or white gold glory. The rounded square case will look good particularly good on the wrist as sometimes harsh geometric angles looks awkward on the organic shapes of our hands. While the watch is clearly from the de GRISOGONO line, it is a very new design direction for the company. Powering the watch is the automatic mechanical de GRISOGONO DF 21-90 movement with hours, minutes, and a second time zone hand.

I am not convinced that the size of the dauphine hands is big enough for me. They are the perfect size for the smaller dial that appears on the machine textured dial when you open up the shutter, but when closed – they look stubby, really stubby. I’d have a feeling that they might look more odd if they where larger. On the sometimes hidden dial is a clever second time zone hour hand. Use it with the standard minutes hand for the other timezone. This is to be distinguished from a GMT hand, which shows the time on the 24 hour scale. The main dial is black via a PVD application, with the applied gold numerals that make for a very pretty face. 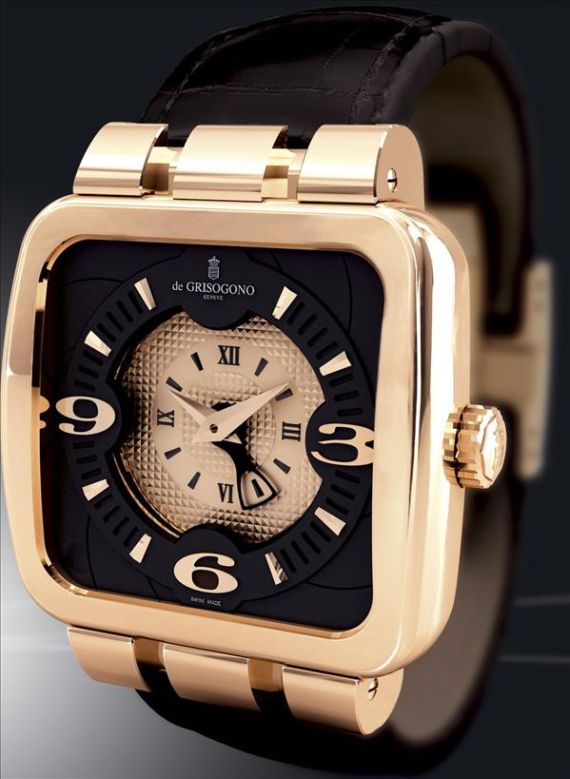 In trying to determine the type of person this watch is best suited for, I keep coming back to the fact that I want to wear one. de GRISOGONO succeeded in giving the watch two personalities, as each face is different. The Roman numeral inner face is more classic Swiss watch in flavor, while the rest of the watch is almost Italian in charm and design. Not forgetting the shutter complication (which de GRISOGONO oddly refers to as a “diaphragm”), you have a very rare type of complication only seen on other de GRISOGONO watches. It is operated by the sliding lever on the left of the watch case. The soft edged case on the Fuso Quadrato itself has unique independently attached lugs connected to an alligator strap. Available by fall most likely, the watch will likely be in the $30,000 plus range.