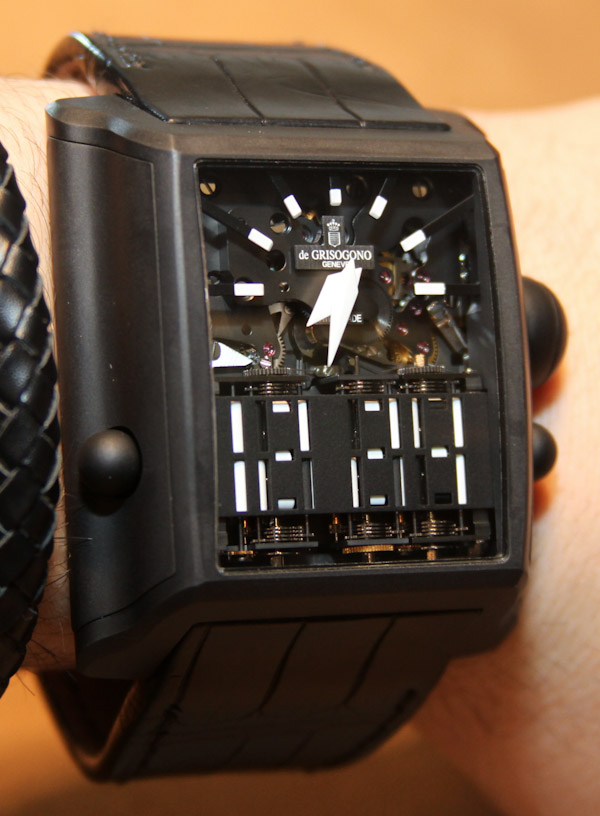 It was back in about 2008 that de GRISOGONO unveiled a watch that would really change the game for the modern, ultra-high-end exotic timepiece. The Meccanico dG was not the first timepiece of its type, but it did something a bit special. It visually offered a message to the mainstream public of what watch lovers were so fanatical about. A futuristic case with a dial that had a traditional analog face along with a digital display. Under all that was pure mechanics. The concept really seamlessly integrated mechanics with the digital age in a way that anyone could appreciate. This is in contrast to dials and designs that require years of watch appreciation to even understand (think most Harry Winston Opus models). Suddenly, many more people learned that a watch could cost several hundred thousand dollars.

The Meccanico dG was not ready for prime-time in 2008 as I understand it. The complex movement that integrated over 650 parts needed a bit longer to get right. I don’t know if de GRISOGONO got it right, but now over four years later, the model still feels fresh and fun – having been offered in various styles over the years since its debut. de GRISOGONO has a bit of a history offering technically ambitious watches that require a bit more time to tinker out the quirks. Though, you have to love their ambition when it comes to these things. 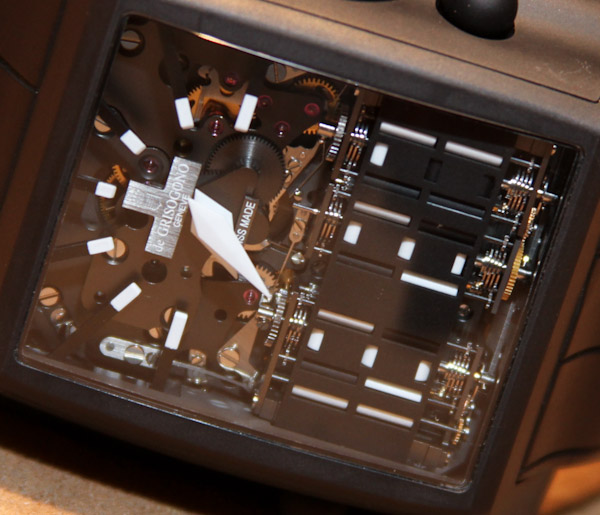 Hands-on with the Meccanico dG was a joy for me. I had been wanting to play with the watch for eons (or so it felt). The first thing you notice of course is the dial. The exposed mechanics of the caliber DG 042 manually wound movement make it readily apparent why this piece costs so much – it is just really complicated. It must have taken forever to make it work properly. The digital mechanism requires so much power that the movement has just 35 hours of power reserve. Winding it requires you to flip over the crown flap and get your fingers in there. It is cool to see the bubble on the side of the case lift open.

As you can see, there are two dials on the watch. Each is relatively independent – so you can consider this a two timezone watch. The concept is really about marrying the traditional world of horology with the modern electronic age (though the movement is of course purely mechanical). Adjusting the digital display is done via the pushers on the side of the case. One is used to advance the minutes, and the other is used to advance the hours. Reading the dial is relatively legible depending on the version of the Meccanico dG. I like this black and white model a lot. Though the watch has had a range of colors starting with the famous neon green. 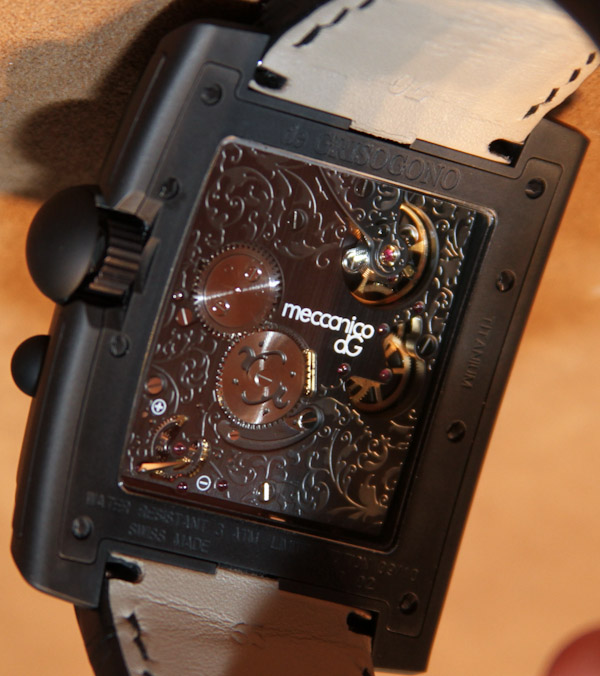 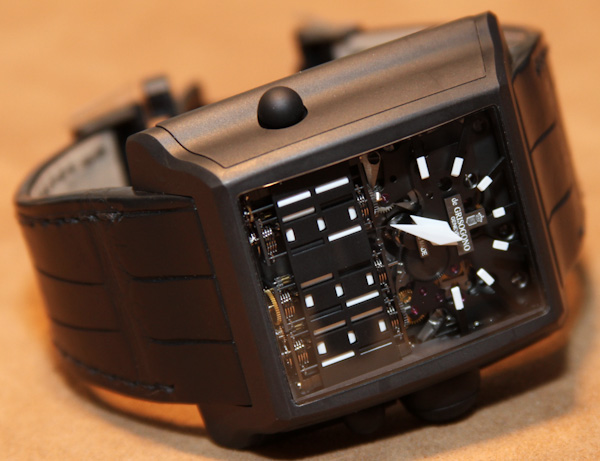 The de GRISOGONO Meccanico dG is not a small watch. The case about 48mm wide by about 56mm tall, and 15mm thick. It is imposingly cool on the wrist. This black version has a titanium case (as most models do), but there are gold versions available as well. The curve of the case is quite elegant and attractive. It has a nice organic feel to it in contrast to the technical look of the dial. On the rear of the watch you can view the back of the movement and see the floral engravings (in typical de GRISOGONO style).

Playing with the movement is fun. It more or less operates just as you would expect. The digital display is novel and adjusts rapidly as time passes. You need to decide whether this is a super high-end nerd watch, or a sophisticated techie watch. Hard to say… 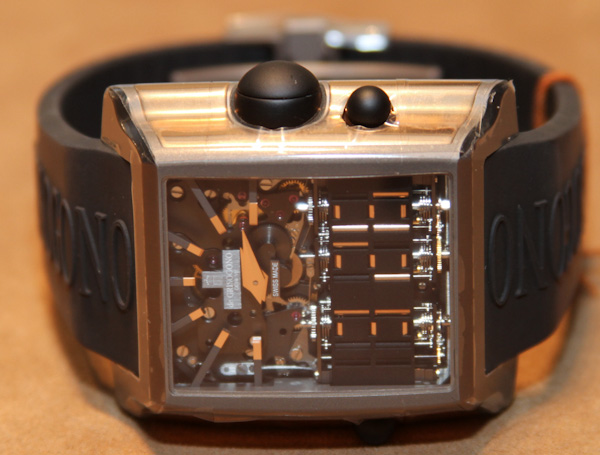 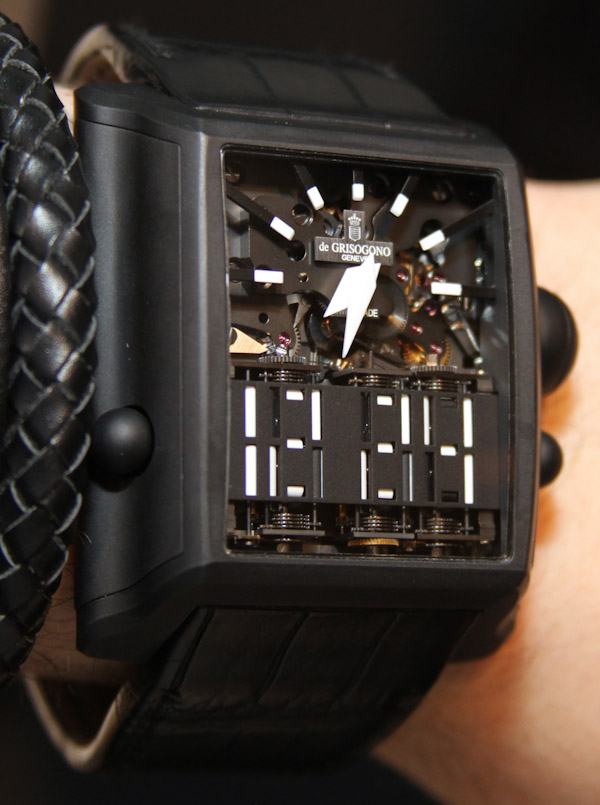 Each of the Maccanico dG watches are limited editions. Most are in a series of under 200 pieces. These are extremely rare watches and if you see one “in the wild”, consider yourself lucky. The person wearing it certainly made a unique investment. Prices for the watches are over 300,000 Swiss Francs. For that you get something really cool, and something that only a few people in the world can service. Overall I am really happy I got to check out de GRISOGONO Meccanico dG hands-on.