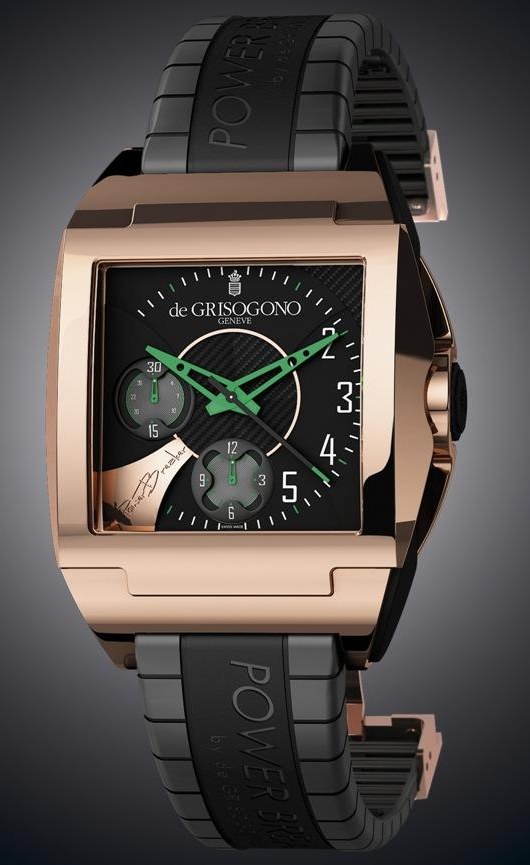 In my opinion de GRISOGONO is a pretty interesting and yet under represented brand (at least in the US). I am not familiar with their entire collection, but some of the stuff is interesting. A watch that epitomizes their sport piece collection is the oddly named “Power Breaker.” In gold, it has a name that sounds like a piece of construction equipment. That or a WWE wrestler.

A lot of this stuff just slips through the cracks. This “N08” Power Breaker Chronograph watch actually came out last year. In 18k rose gold, the case is… squarish and so GRISOGONO. What does de GRISOGONO even mean? I love the watch strap. Looks like part of a Stillsuit the “Fremen” wore on Arrakis in Dune. You fellow nerds know exactly what I am talking about. Though I could easily like without the “Power Breaker” logo on the side of the rubber strap. Sounds like something that would be applied in purple lightning graphics on the side of a souped-up Dodge Ram pickup truck.

Wait a minute, de GRISOGONO is thinking along those lines already! Look at that oddly placed gold plate on the dial at 7 o’clock. Engraved right on there in power cursive is “Power Breaker.” Screw the lighting letters, they already have the text done for you! de GRISOGONO really does think of everything. 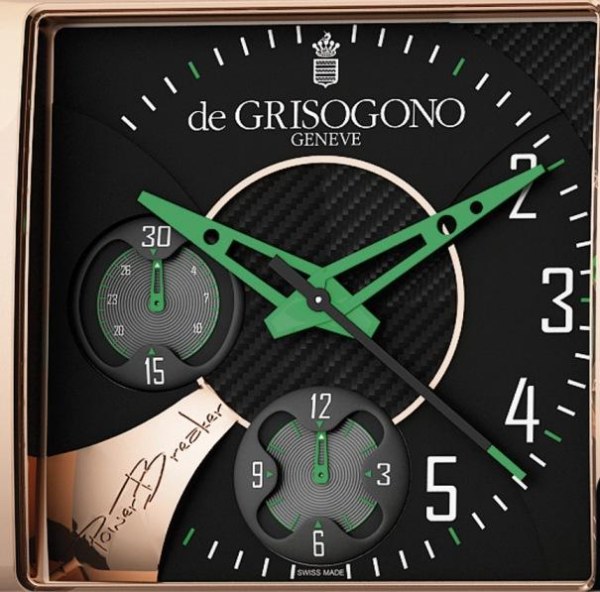 The green elements on the dial match the “snakey” theme of the strap quick well. And how often do you get a watch with gold and green together? Not often I would guess. While unconventional, the dial is legible, and it displays the time and the chronograph counters – no sub seconds dial. The case itself is 42.5mm wide with a sapphire crystal. Inside the watch is a Swiss automatic movement, but I am not sure by who. It has further been modified specially for de GRISOGONO according to them.

According to the brand the watch dial is supposed to remind you of a racing car’s gauges. Either I haven’t been in enough race cars or that makes no sense. Monster truck ? Maybe. “Folks get ready! All cars stall in fear… of the POWER BREAKER. The demolition-mobile!” One of these de GRISOGONO Power Breaker Chronograph watches is available on James List right now for about $20,000 – a lot less than retail.