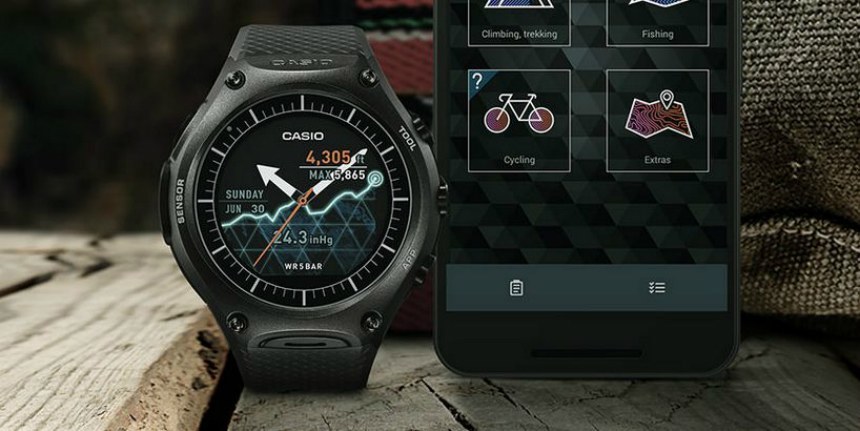 Did Casio Get Their New WSD-F10 Smartwatch Right? 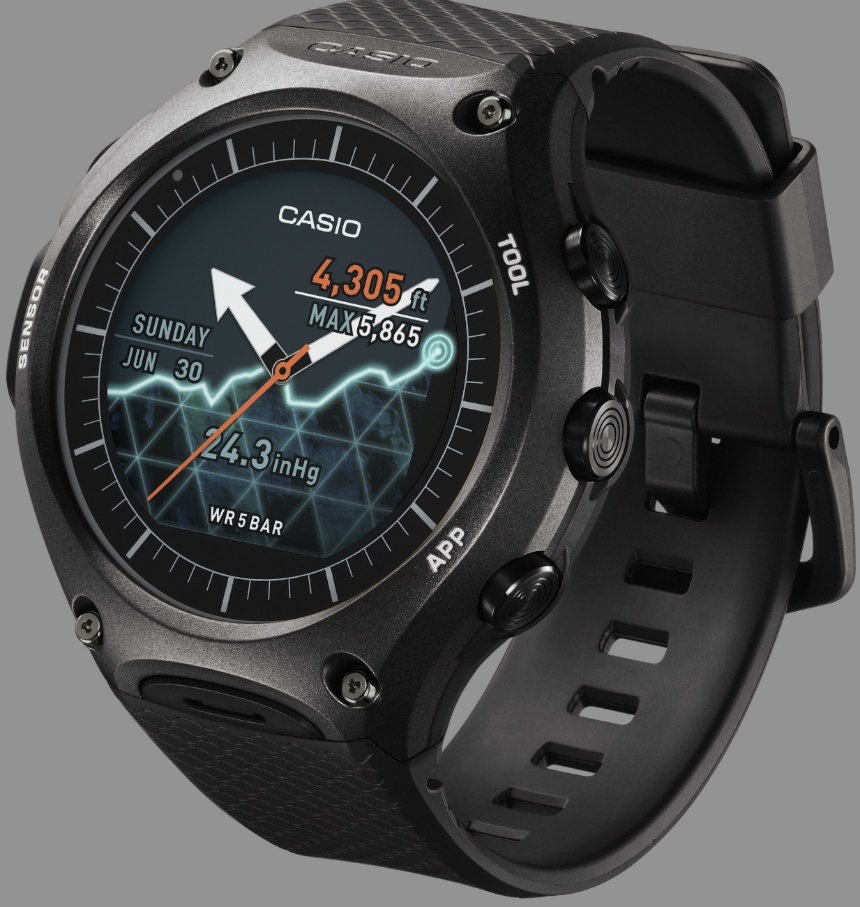 Recently at the CES 2016 (the Consumer Electronics Show), Casio debuted what is arguably their first modern smartwatch with the Casio WSD-F10 collection that includes four models ranging in colors that include the green WSD-F10GN, orange WSD-F10RG, black WSD-F10BK, and red WSD-F10RD. Powered by Android Wear, the Casio WSD-F10 collection is designed in the same vein as their popular ProTrek collection of outdoor watches. For consumers, what will mark the Casio WSD-F10 as unique (thus far) is the watch’s focus on durability, internal sensors that combine those traditionally found in smartwatches along with those traditionally found in ProTrek watches, as well as a useful dual-layer screen.

In all, Casio might be a bit late to the smartwatch game as a serious company in the “tech watch” industry, but their Casio WSD-F10 collection is intelligently designed and offers a lot of promise for those keen on how smartwatch technology will do a lot more for them than just give them call and message notifications on their wrist. The Casio WSD-F10 is still in a pre-launch phase, so I won’t really go into the functionality of the watch until we’ve had a chance to test it in the near future. With that said, there is a lot we can glean thus far.

You might recall that, in May of 2015, we published an article I wrote predicting what a Casio smartwatch should be like. At the time, I questioned Casio’s conspicuous absence from the serious smartwatch market, instead focusing on some Edifice and G-Shock range models with light Bluetooth functionality. In that article, I discussed in detail what features I felt a Casio smartwatch should have. So, how well does the Casio WSD-F10 live up to the demand I made back then? Pretty well, it seems.

I argued that the most important things that a Casio smartwatch should have are durability, useful sensors, and long life – as well as a focus on the outdoors. When people think about Casio digital watches, they think of reliability, functionality, and survivability. With 50 meters of water resistance and compliance with military MIL-STD-810 durability standards, the Casio WSD-F10 is just abusable enough to edge out the competition. Right now, Garmin’s Fenix range of smartwatches is probably the number one competitor of the Casio WSD-F10 collection. I am guessing that increased measures of durability will be part of future Casio smartwatches – but this is a good start. 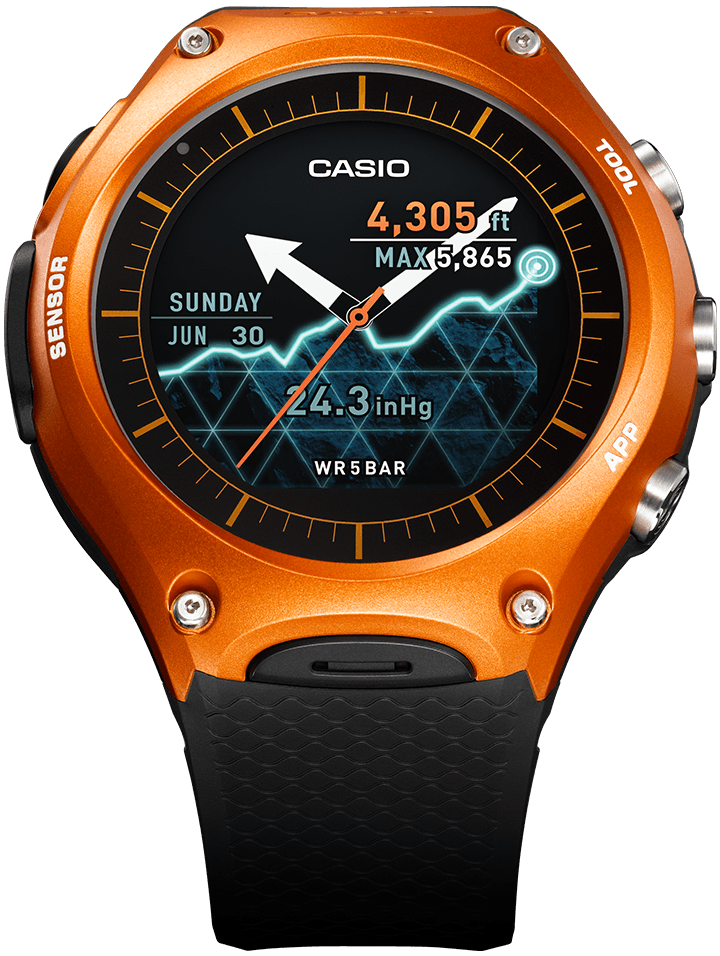 Weighing in at 93 grams, the Casio WSD-F10 isn’t too heavy, but it is large at 56.4mm wide by 61.7mm tall and 15.7mm thick. That is a bit more than many of the brand’s ProTrek models. Of course, Casio isn’t trying to make the watch larger than it needs to be, but people need to forgive the fact that smartwatches like this literally barely manage to fit all the hardware and battery in the provided cases. Not until we have better batteries and smaller hardware will we see any significant decreases in smartwatch size (even though the Apple Watch manages to do a lot in a smaller space).

Let’s talk battery life. First, Casio suggests a total recharge time from empty to full of 2 hours (about right for a battery this size), and rather than a dock, there is a magnetic cable that attaches to the side of the case to charge the Casio WSD-F10. Battery life is estimated to be “more than one day” in normal smartwatch mode. Of course it varies based on usage, but let’s just say that if you are out in the wild using the features with any frequency, you’ll have one day of battery life. The Casio WSD-F10 has another mode called “Timepiece Mode” that turns off the smartwatch functionality and just displays the time on a monochromatic screen. In Timepiece Mode, Casio claims “more than one month” of battery life. 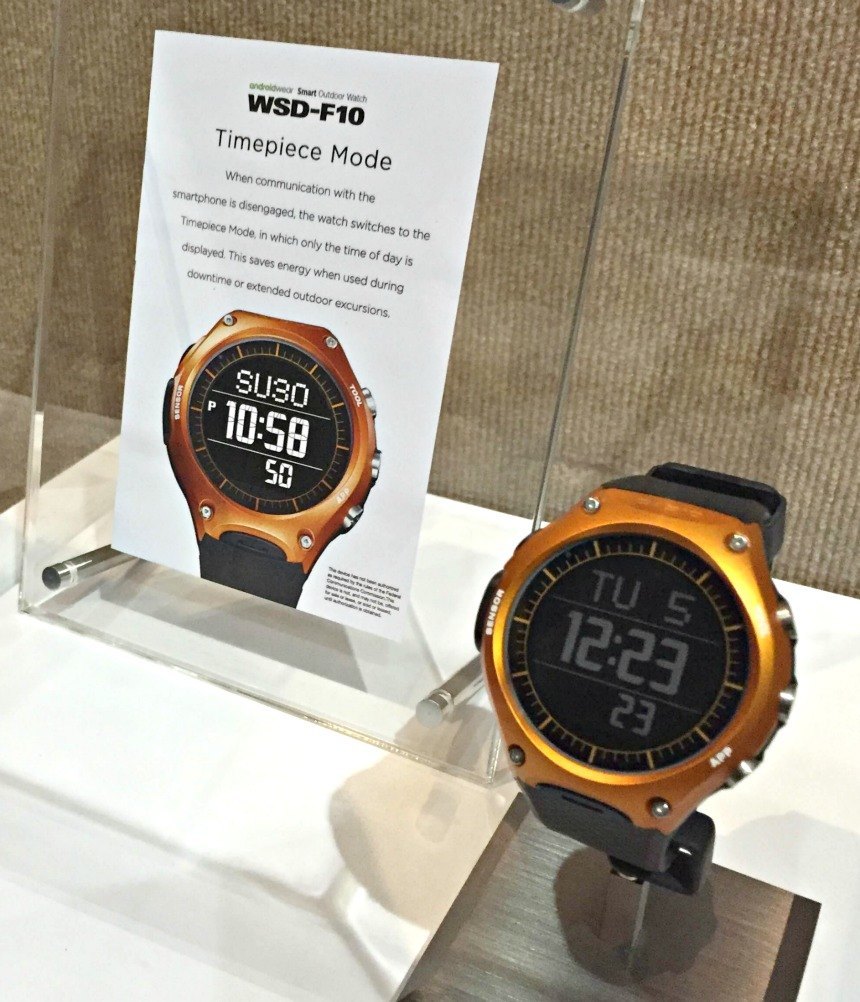 In addition to the touchscreen, the Casio WSD-F10 has three case pushers which are a power button, “Tool” button, and “App” button. I like physical buttons a lot, so the more buttons the better, in my opinion. The color screen is a capacitative touchscreen that is 1.32 inches in size and has a 320×300 resolution. What is interesting is Casio’s use of a “Dual Layer” screen. Here, the color TFT LCD screen sits under a semi-transparent monochrome LCD screen. This allows for a persistent display of the time in order to keep the watch hands-free when you just want to glance at it without using your other hand. In principle, this is likely similar to their use of a two-layer screen that we’ve seen in ProTrek models for years such as the PAW-2000 (reviewed here). 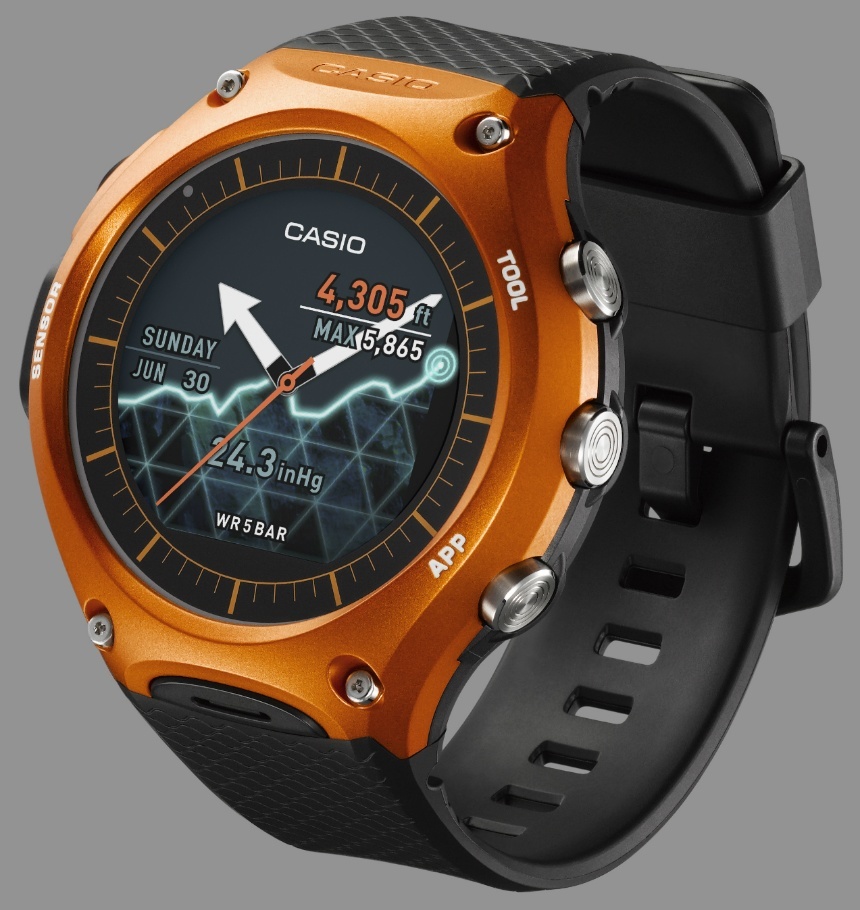 It is this upper monochromatic screen which is active during Timepiece Mode, thanks to its much lower draw on the battery. Again, I also like that this means the Casio WSD-F10 is not likely the type of smartwatch to have a blank screen most of the time. Speaking of the screen, in addition to all the options available in Android Wear by default, Casio will include a range of customizable special dials with not only on new dial designs, but also based on classic Casio watches, pulling heavily from their G-Shock collection. This will be a fun way for Casio WSD-F10 owners to personalize their watch and still maintain its Casio personality. 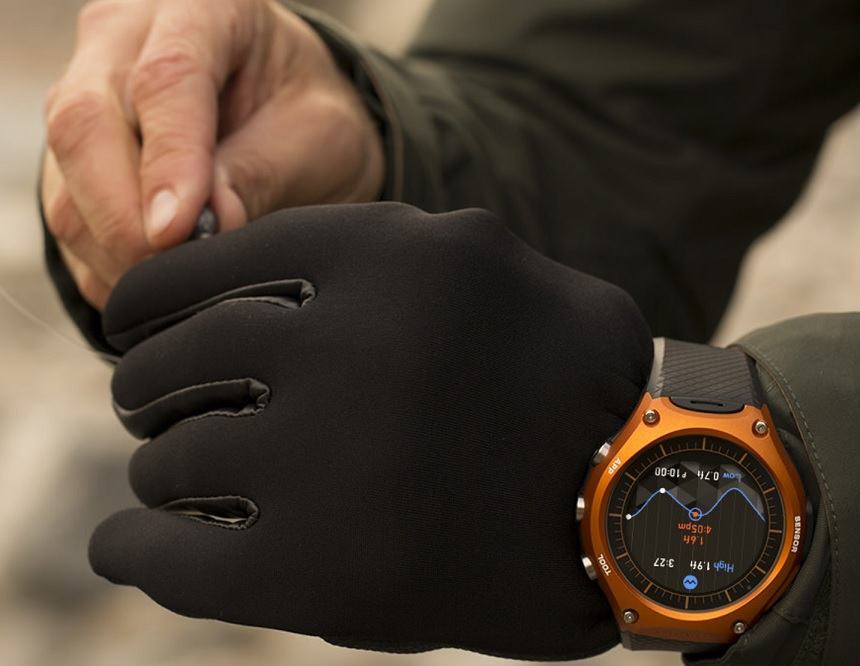 In addition to a microphone and accelerometer, the Casio WSD-F10 has a series of built-in sensors that Casio ProTrek fans will appreciate. Unlike most smartwatches that simply pull data from the host phone, the Casio WSD-F10 has an internal altimeter and barometric pressure sensor, as well as a compass. No thermometer in this watch, but that isn’t a big deal. Casio has provided for integration with a slew of third-party apps to make use of the data as well as to offer specific functionality for various activities ranging from cycling to fishing and general adventuring, with everything in between.

Casio also ensured that the Casio WSD-F10 would be able to connect to devices using Bluetooth 4.1 as well as WiFi. It is true that more and more Android Wear smartwatches are including WiFi connectivity which a lot of consumers have been asking for. The ability for the watch to have its capabilities expanded using apps is crucial, but I hope that Casio itself ensures a well-curated experience rather than hoping that other companies will help make the best use of its software. 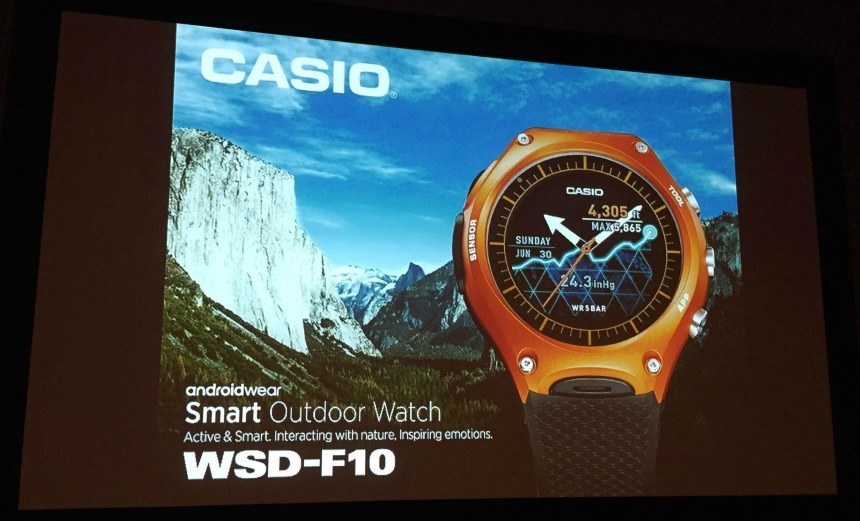 One interesting accessory that Casio also will have available is the EX-FR100 outdoor camera which is meant to be mounted to your body and can be controlled via the watch to take pictures. However, Casio has mentioned limited regional availability of the camera so it will not be available in all countries (officially), including the US. Overall, the Casio WSD-F10 collection of watches looks pretty handsome and well-equipped for the task of taking the smartwatch experience outdoors. The key success metric for Casio will come in with the overall user experience and whether or not the deep functionality of the Casio WSD-F10 smartwatch is merely existent or easily accessible from a user interface standpoint. I look forward to checking out and reviewing the Casio WSD-F10 “Smart Outdoor Watch” when they will be commercially released in the Spring of 2016 for an estimated price of $500. wsd.casio.com