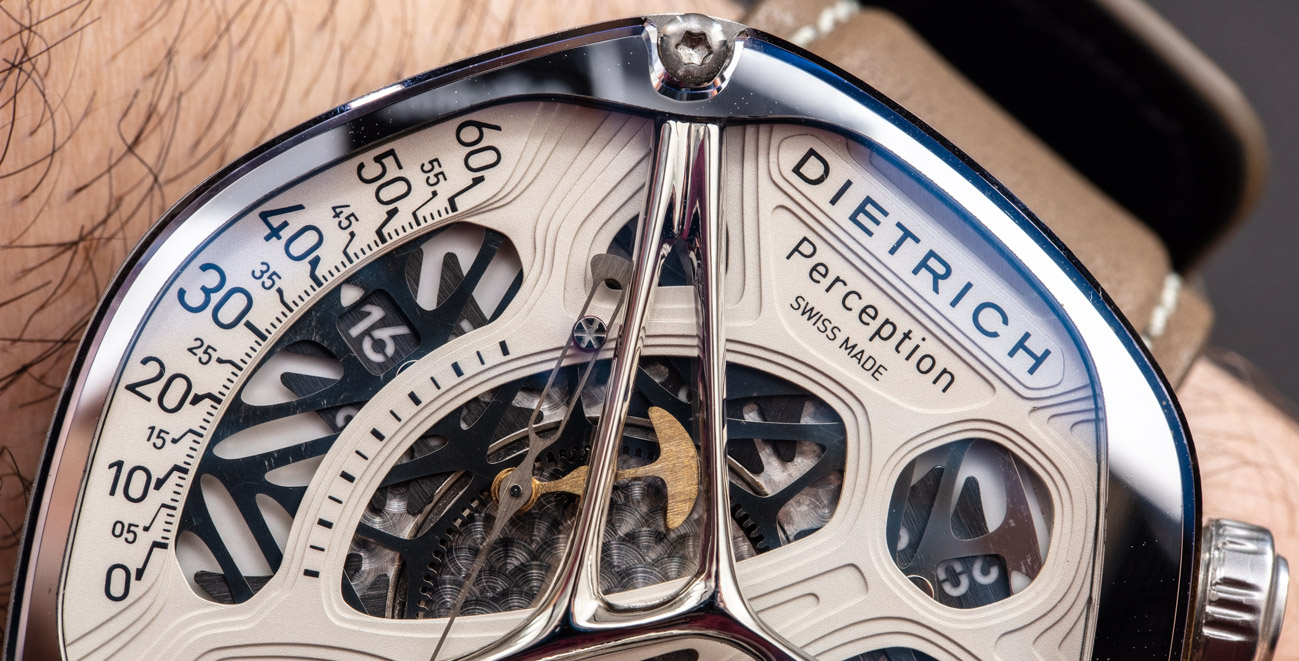 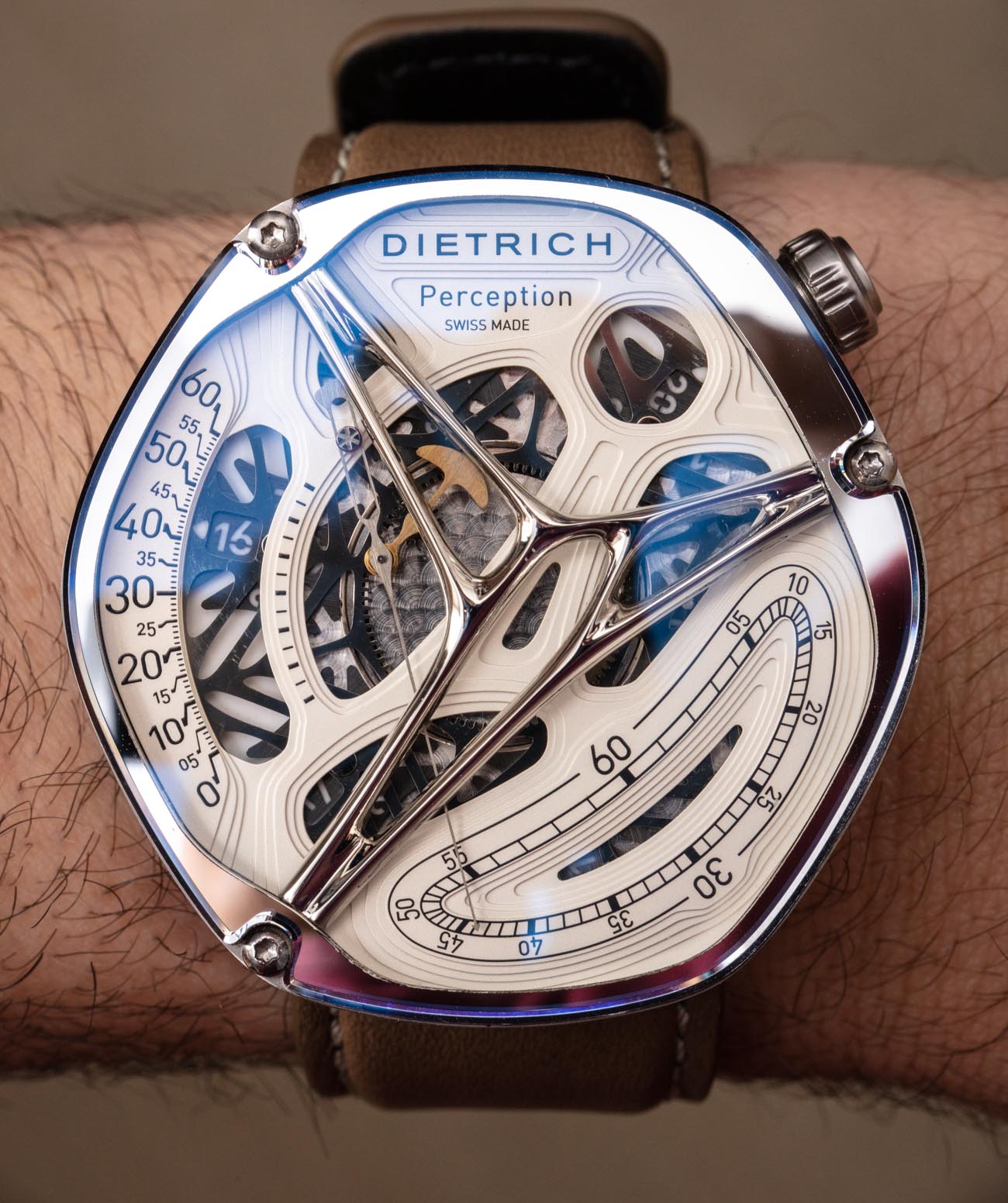 This is the Dietrich Perception, which is, to date, by far the most expensive and exotic watch produced by the eponymous brand of designer Emmanuel Dietrich. The brand’s typical wristwatch products include the roughly $2,000 Dietrich TC-1 (aBlogtoWatch review here) or Dietrich DD-1 (aBlogtoWatch review here) watches, but the Perception actually predates them. The Perception is also larger and eminently more complex. That said, the case is actually more or less a sized-up version of that which is used for the Deitrich DD-1, and wearing this otherwise large 48.5mm-wide timepiece is rather comfortable.

When Emmanuel Dietrich designed the Perception, his goal was not only to explore his interest in “biomorphic” industrial design, but also to more specifically play with how time is displayed. It is worth noting that one of the highest callings in the arena of watch design is to create a novel, or at least useful, way of indicating the time. The standard two or three central-hand dial is the industry norm, which some particularly esteemed designers like to eschew for the purpose of being different, and ideally being beautiful. The Perception doesn’t break new ground, per se, but it does incorporate two uncommon ways of indicating the time in one complete package, which ends up being as much “wow & wonderful” as it is “wild & weird.” 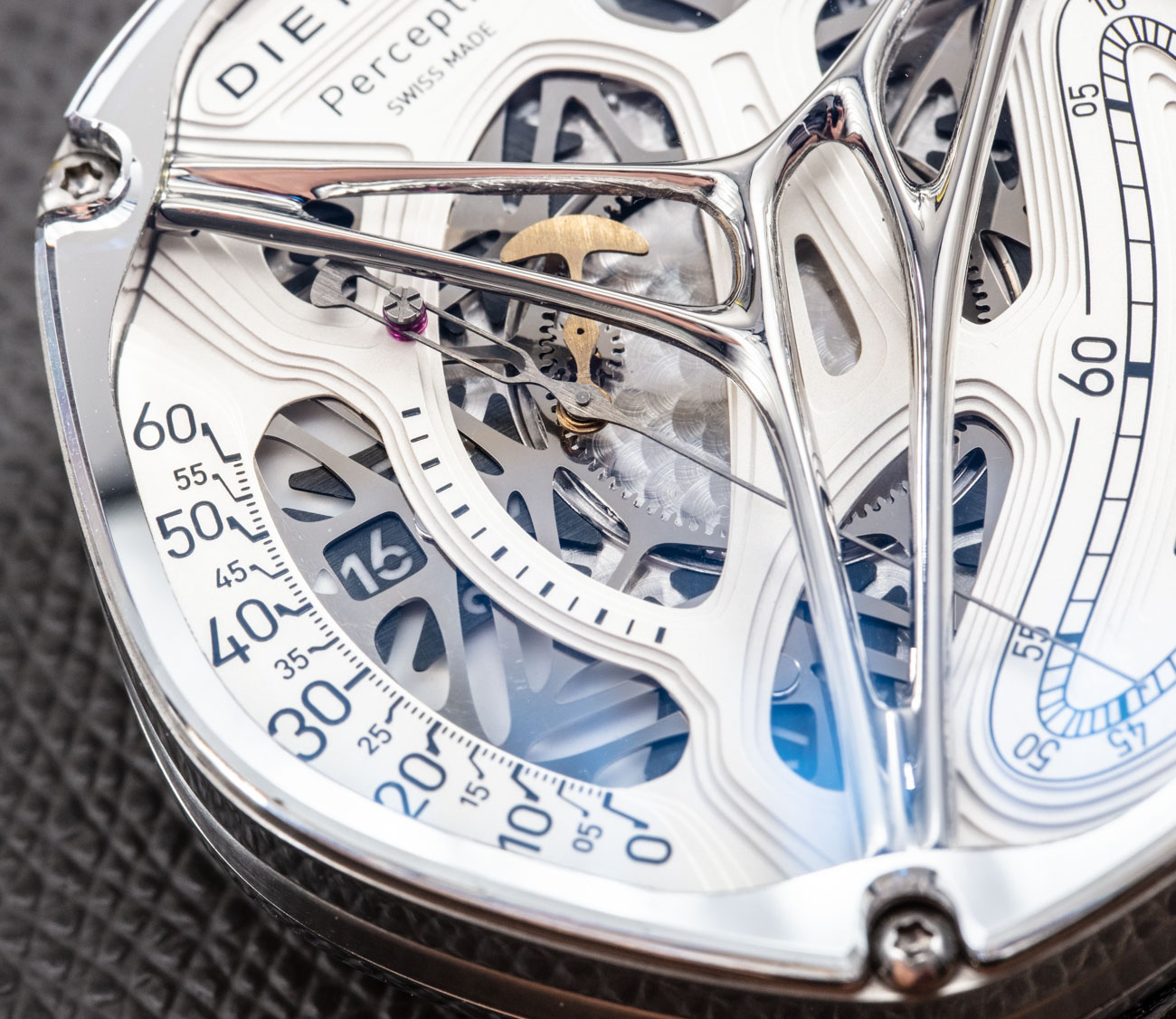 Using a base Swiss-made automatic mechanical movement, the Perception’s display for the time is created as a bespoke module that makes up much of the dial. Over the decorated module movement plates is a semi-skeletonized dial topped with a three-pointed, polished metal bridge that sits underneath a large, custom-made hex-shaped sapphire crystal, which sits over the entire top of the watch. This concept was further refined and made more affordable in a watch like the Dietrich DD-1. Note how in order to keep the watch looking as wearable as possible, elements like the crown have been moved away from the standard 3 o’clock case position.

The Dietrich Perception case is in steel and, in addition to being 48.5mm-wide with 30 meters of water resistance, it is 14.5mm-thick. It wears so comfortably because the case rides on top of your wrist, with a one-piece strap that is woven through fixed lugs that are under the case. Anyone who knows the unique wearing comfort of a Seiko Tuna can imagine what wearing the Dietrich Perception is like. Compared to Dietrich’s more standard products, the Perception has better finishing (given the cost) and thus the many curves and polished surfaces of the case and dial play with the light in a rather eye-pleasing manner. 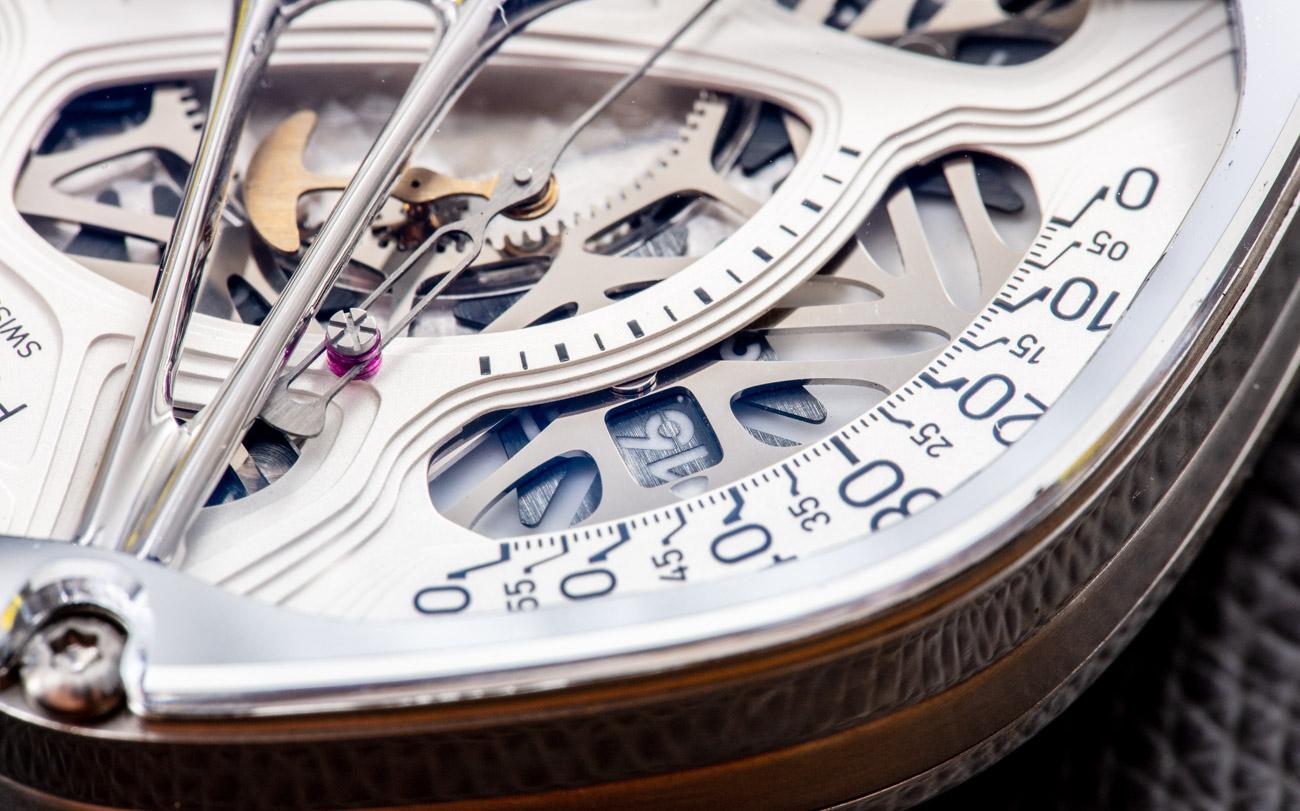 Note that this particular Perception watch is Dietrich’s own sample, which, in retail form would have a few cosmetic upgrades. The watches are so rare that they are produced on order only. According to the Dietrich website, if you order one of the two Perception models now available, the wait time to get one is currently seven months.

Now, let’s examine the time display. There are two areas here because the display of the seconds is a distinct discussion from that of the hours and minutes. Located at roughly 4 o’clock quadrant on the case, the seconds indicator uses a principle Dietrich calls relative seconds. It uses a quirky gearing system to have the seconds hand follow a non-circular track. The only other watch I’ve seen (that comes to mind) that uses this principle is the NORD Zeitmaschine. The actual seconds hand is really long and extends all the way to its connection point at the other end of the watch. I just think Dietrich thought this gearing principle was cool and wanted to find a way to incorporate it into a wristwatch dial. A plus side is that we now get to think of the span of 60 elapsed seconds as drawing a banana (or smiley face). 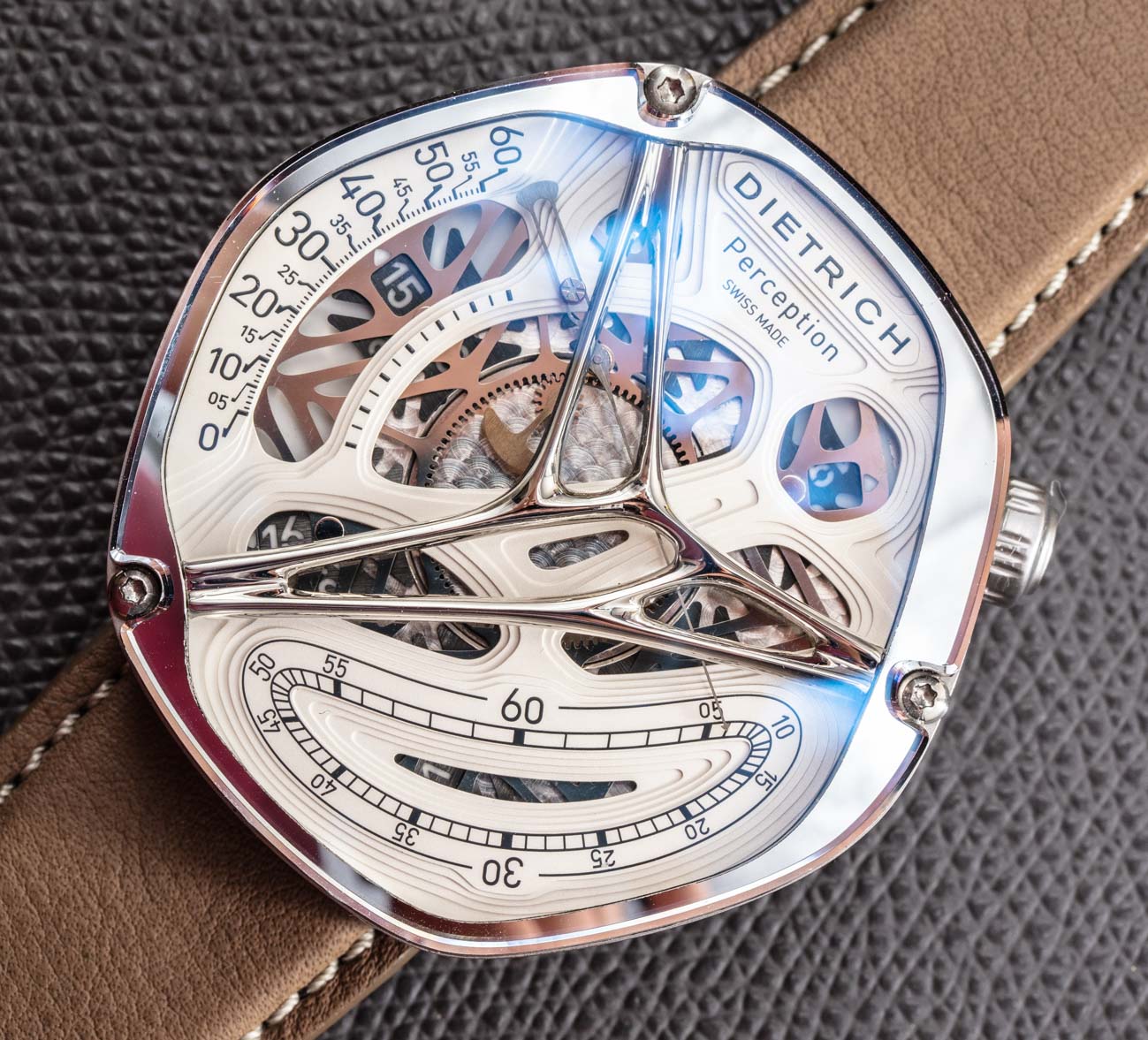 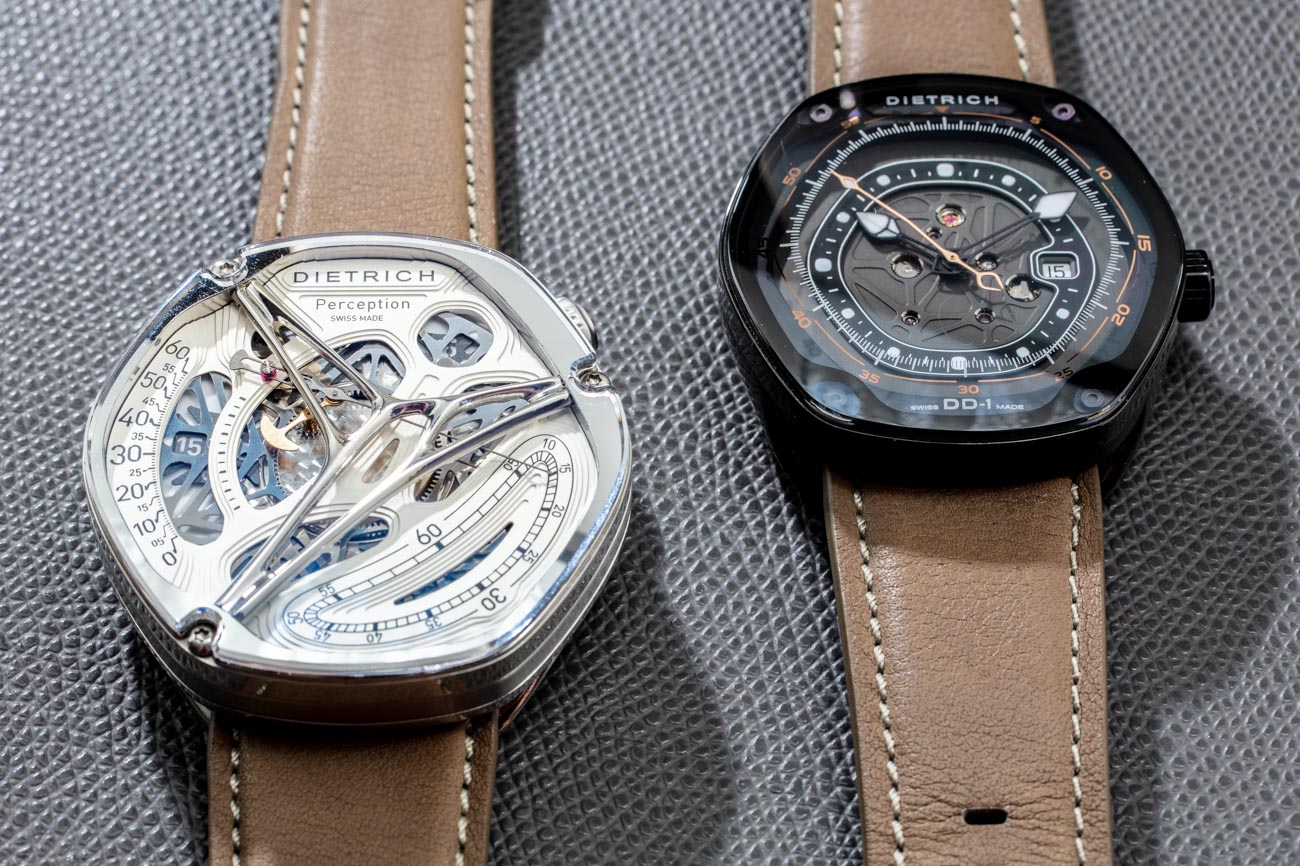 The minutes and hours are indicated over near 9 o’clock, and it is important to mention that the time is displayed in 24-hour, not 12-hour, format. This is not unprecedented, but certainly not common — especially for a wandering hours system. That’s right, similar to Urwerk, and a few other exotic watches out there, the Perception uses a series of rotating hour-marker discs that “wander” along a minute scale in order to indicate the hours “digitally” and the minutes as a function of the movement of these moving “satellites.” Each of the satellites is shaped similarly to a Calatrava cross, and if you adjust the time forward or backward, you can see them moving under some of the skeletonized dial elements.

Give the smaller size of the hour window, the time isn’t super-legible, but it is clear, assuming your eyesight is sharp enough. Adding to legibility is the fact that each of the hour numerals is painted in Super-LumiNova so that they can glow in the dark. An added bonus of a watch like the Perception is its likely ability to flummox onlookers. While it has real nerd prestige to it, if you are the type of person who likes to project your playful to obnoxious side via your wristwatch then the Perception will have the intended effect with most onlookers. It isn’t that reading the time on it is hard, but rather that the vast majority of laypeople are not accustomed to reading the time in unorthodox ways. Even watch lovers not previously familiar with the Perception likely need to inspect the dial for a bit to understand how it works. Even though Dietrich’s goal was to change the perception of how we view time, he succeeded in creating a wacky timepiece that requires real “inspection” for most people to relate to. 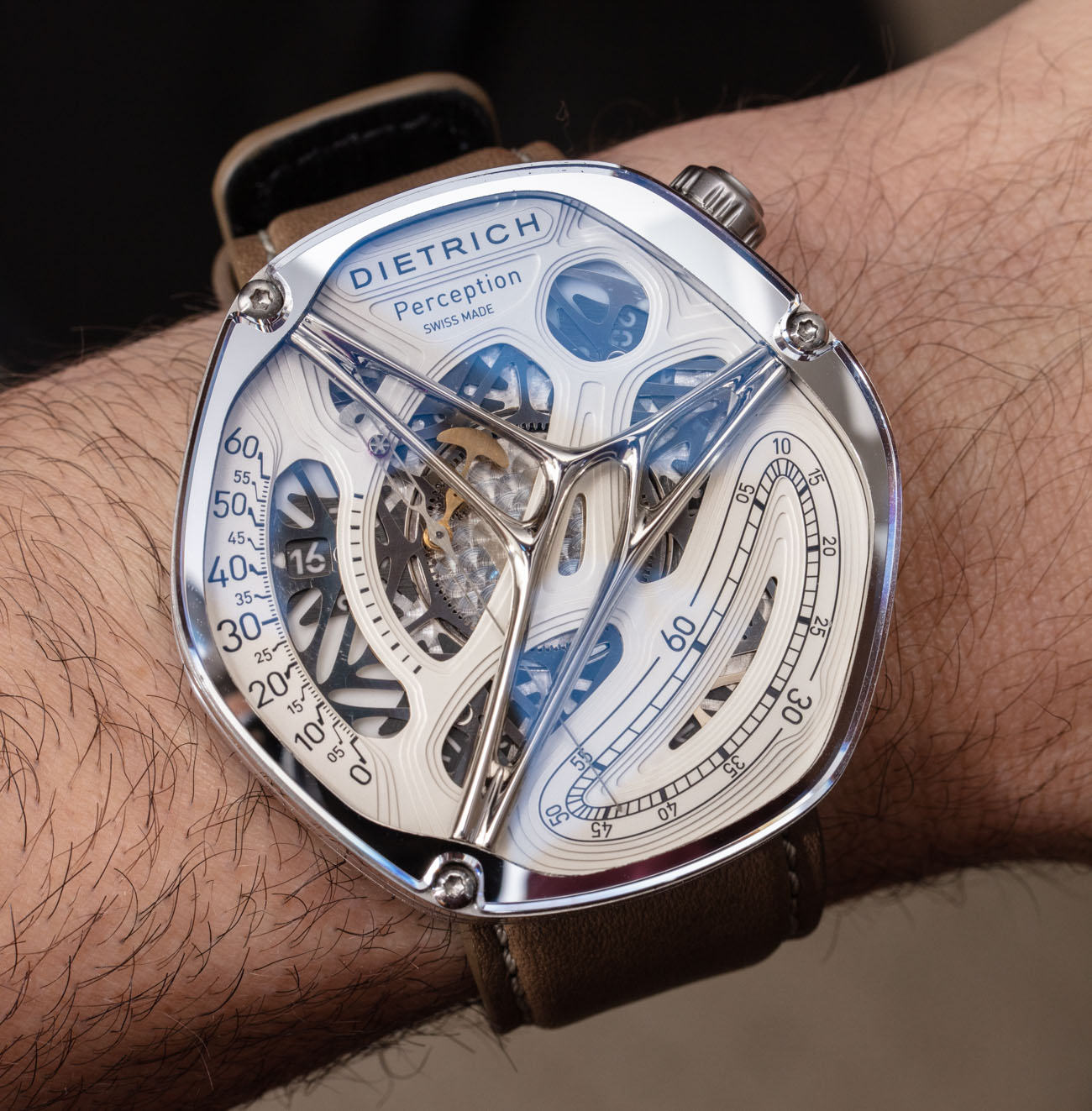 As a halo watch within the Dietrich brand, the Perception is a hell of an interesting piece to sit on the top of the ladder. The Perception will not be a sales success in a way that a brand needs to survive, but it will help round out an already compelling young brand whose bread and butter will be high-value Swiss-made watches for around $2,000. For the real nerds (with cash), the Dietrich Perception is actually a very wearable choice (and not crazy-priced when considering some of the competition exotic mechanical “art” timepieces). Price for the Dietrich Perception watch is 25,000 Swiss Francs. Learn more at the Dietrich website here.