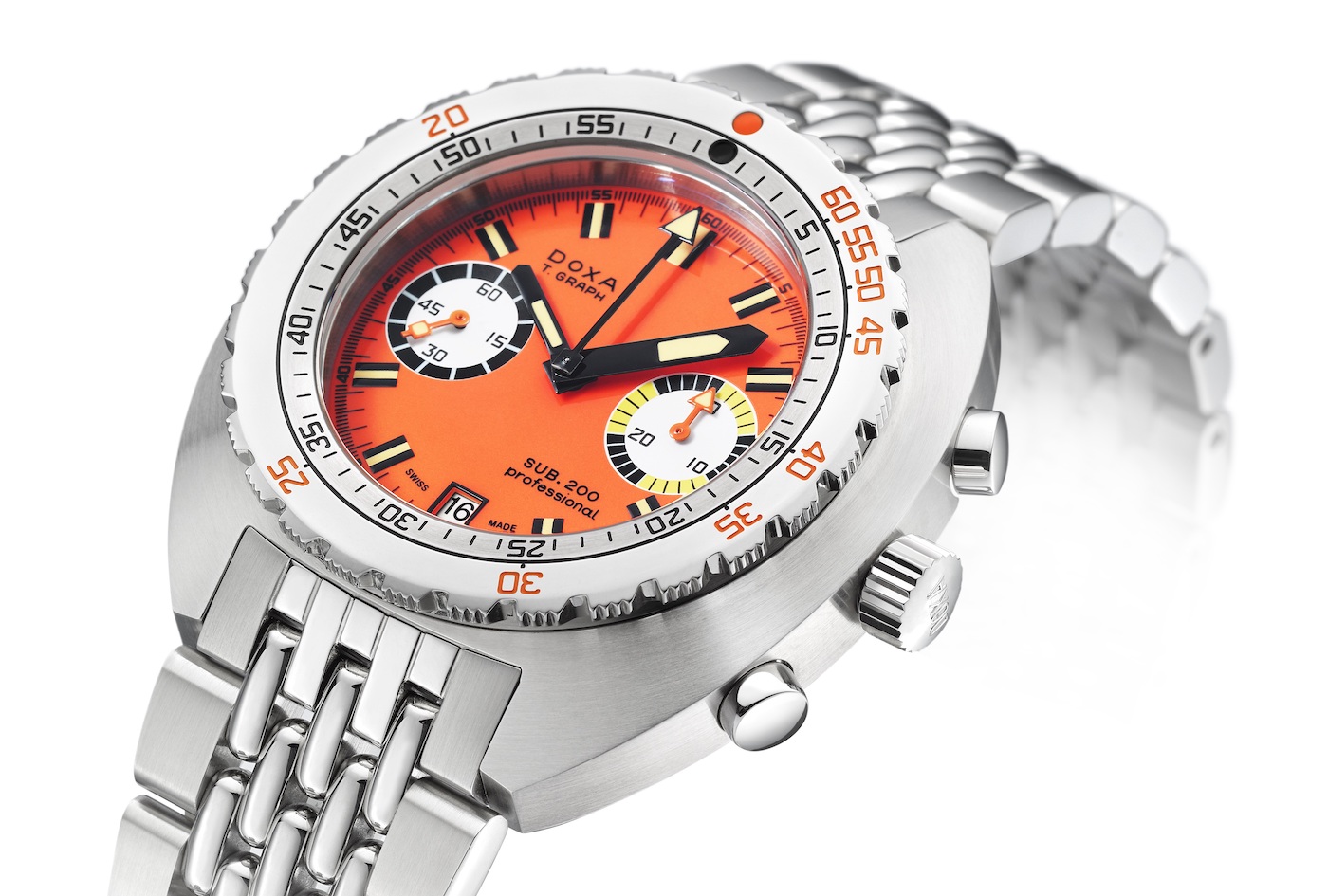 In the aftermath of the headline-grabbing, if somewhat bizarre, Baselworld had by Doxa, a solid entry was needed to remind a faithful audience that the brand had not forgotten its roots. In fact, in light of the release of the limited-edition Doxa SUB 200 T.Graph in stainless steel, the solid 18-karat gold version released in Basel seems a much more forgivable anomaly. Why? Because this release, limited to 300 pieces (as opposed to the 13 gold pieces made available in March), is exactly what Doxa is known — and very much loved — for. 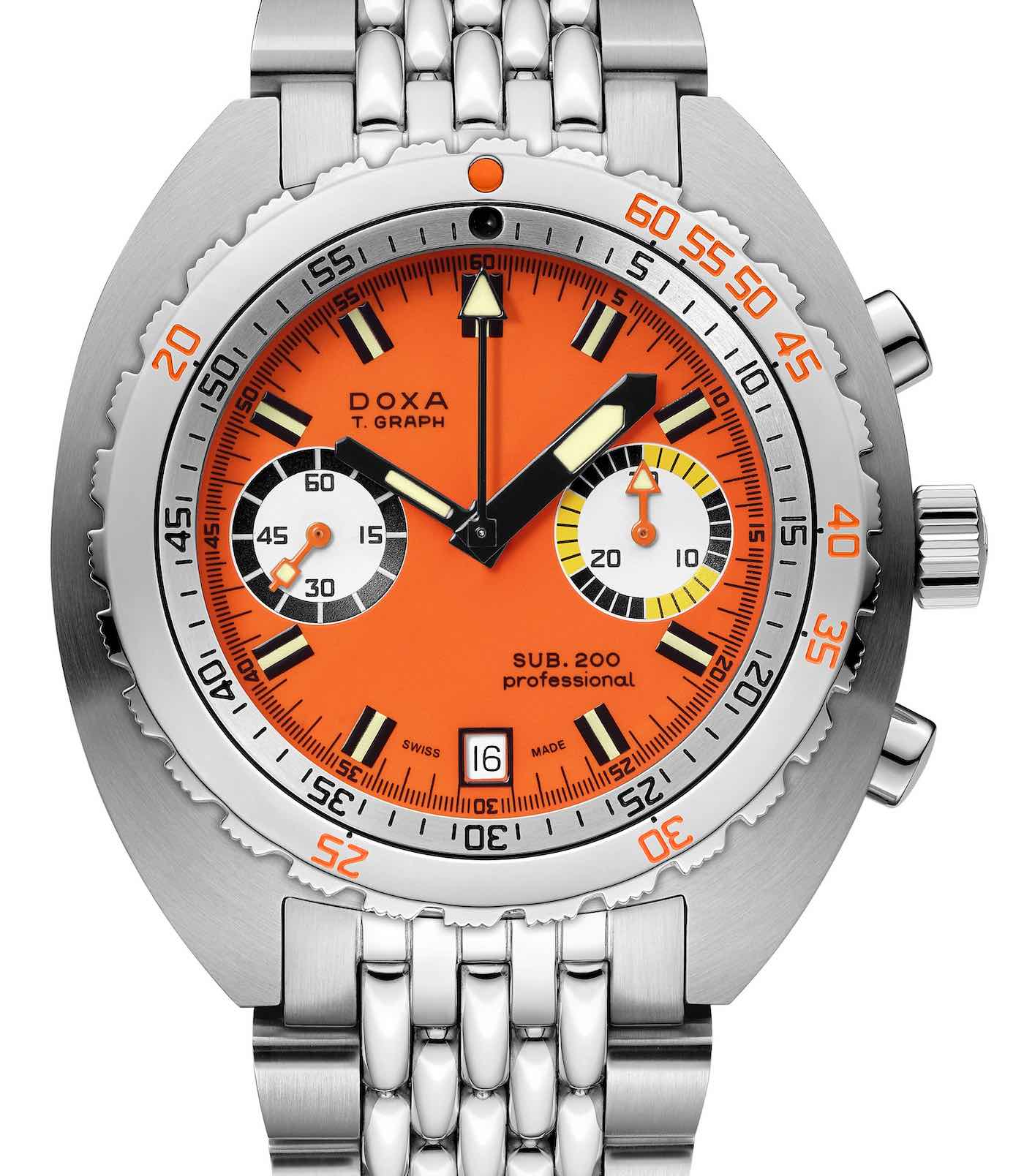 Just as the gold piece was, the Doxa SUB 200 T.Graph in stainless steel is powered by original Valjoux 7734. These movements have been maintained in pristine condition for over 3 years in the archives of Doxa. As far as “new old stock” goes, that’s one hell of a find. These self-winding movements have a power reserve of 45 hours, but a slower operating frequency of 18,000vph. This is great for an era-appropriate homage, but it isn’t the best frequency for a sport watch.

The original steel Doxa SUB 200 T.Graph was released in 1969, two years after the SUB 300 debuted to a rapturous reception. (It was seen, at the time, as the first purpose-designed diver’s watch intended for the general public). While we may take Doxa’s signature orange dial for granted these days, it was kind of radical in its day and stood in stark contrast to the more traditional black or white faces that had preceded it. 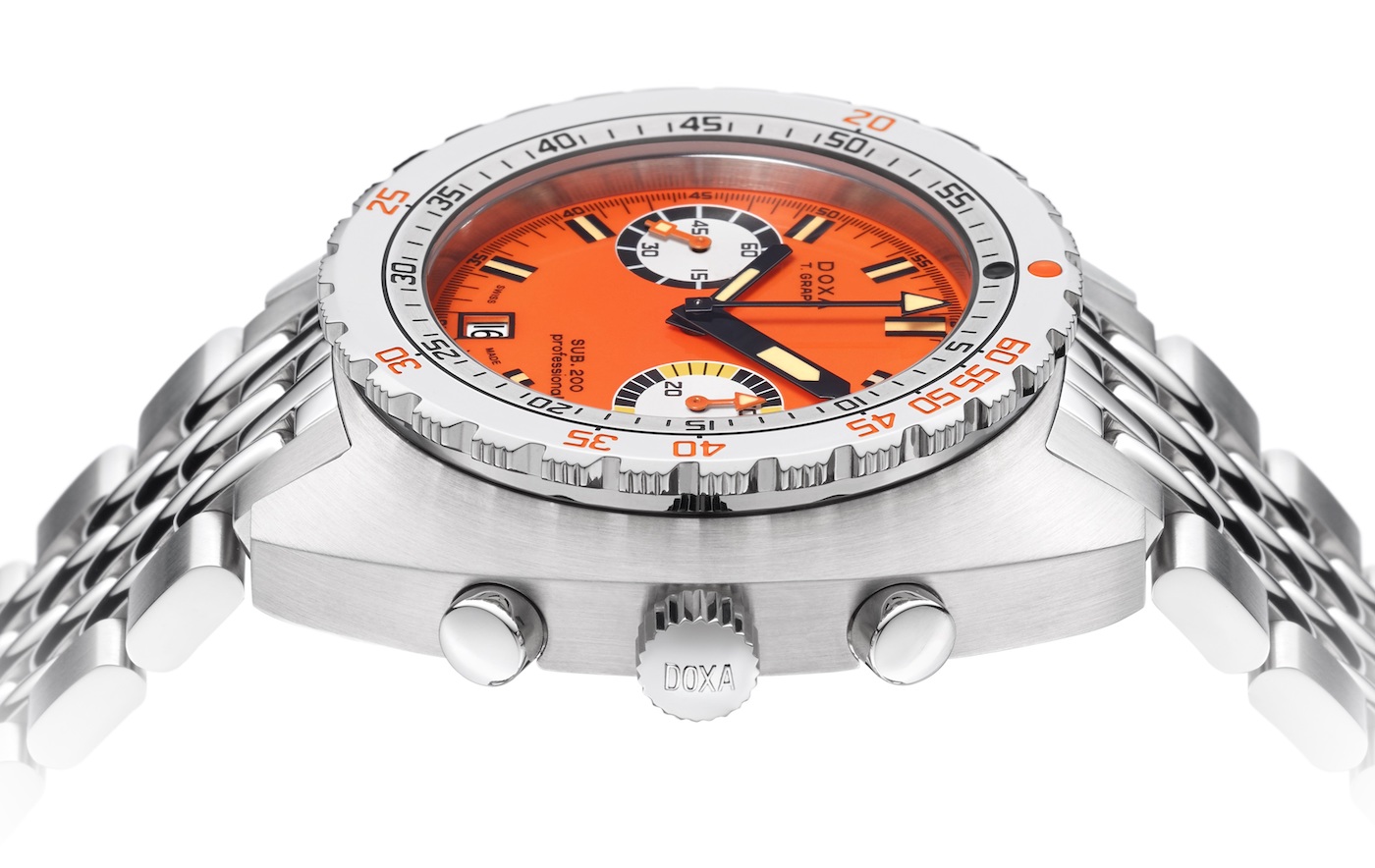 50 years on from the Doxa SUB 200 T.Graph’s original release, the brand has seen fit to update this iconic model. The new model measures 43mm across, 15mm tall, and 46mm from lug-to-lug. It has a scratch-resistant sapphire crystal, a water-resistance of 200 meters, and features the patented unidirectional timing bezel, which, unusually, shows the dive-time in minutes, as well as the depth in meters, so dive-time without decompression stops can be calculated with ease.

The traditional, semi-matte orange dial has an unobtrusive date window at 6 o’clock and two sub-dials located along the horizontal axis. The going seconds sub-dial is located at 9 o’clock, while a 30-minute counter for the chronograph function is situated at 3 o’clock. The centrally mounted chronograph seconds hand, the hour and minute hands, and the hour markers are all filled with beige “Light Old Radium” Super-LumiNova.

The classic grains-of-rice bracelet in 316L steel is included and secured by way of a folding clasp with a diving extension. The clasp is decorated with the Doxa fish logo. The Doxa SUB 200 T.Graph will be available for order on the official DOXA website from September 2nd, 2019. The projected retail price will be $4,900. Find out more about this brand’s long history by visiting doxa.ch.