The De Rijke Amalfi Series is what you get when you combine a passion for road trips and watches with a background in design and engineering. The watch, made by Dutch startup De Rijke Co., goes beyond the aesthetic connection between cars and watches. “I wanted to develop the ultimate driver’s watch in terms of functionality,” says founder Laurens De Rijke. “So, I focused on function rather than just driving-inspired design themes — like a rotor that is shaped like a car wheel. I wanted to develop a driver’s watch that was something more like a tool watch. Being a design engineer, I hold on to the philosophy that form follows function,” he says. 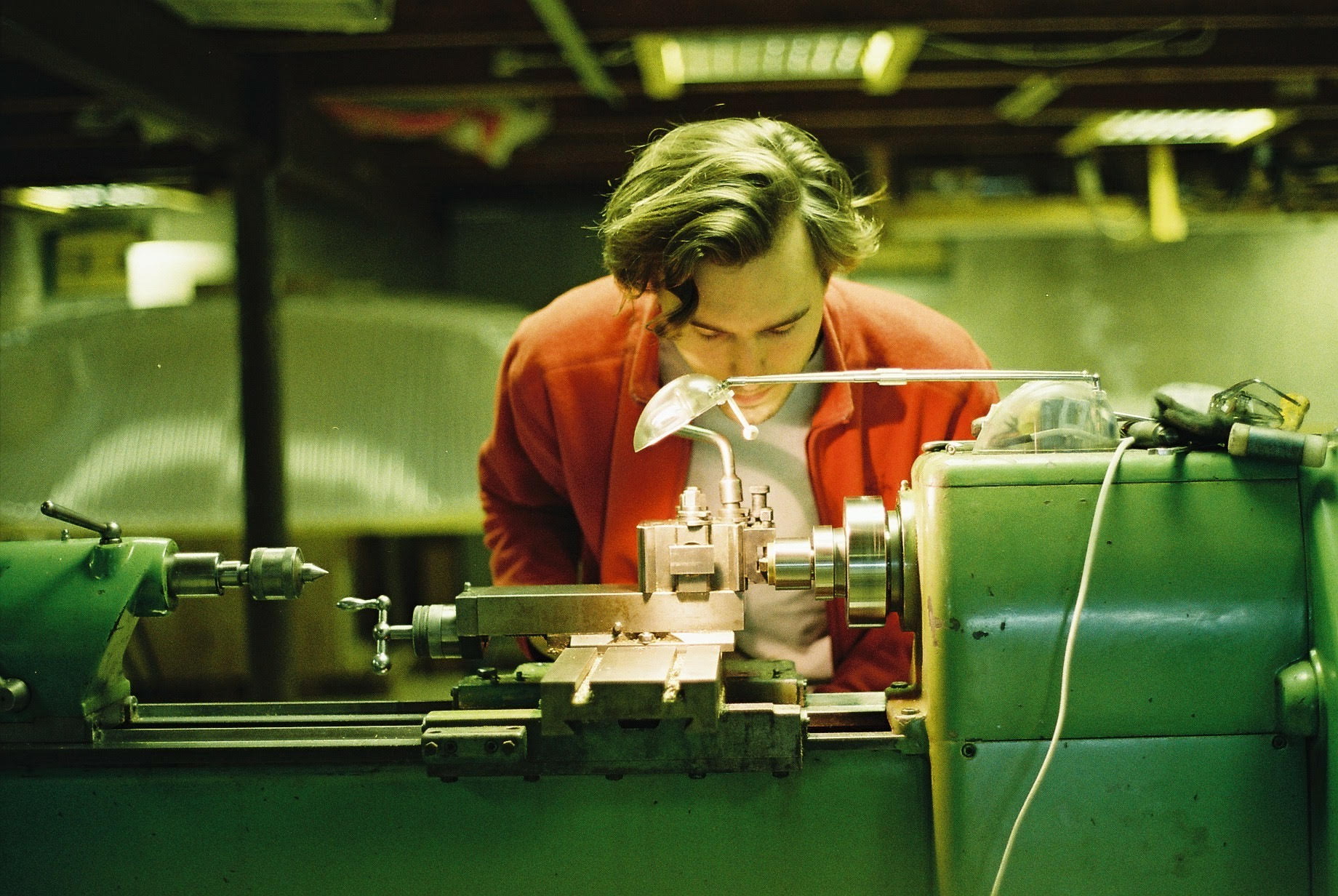 Laurens is an adventurer at heart who developed an early passion for classic cars and motorcycles. He grew up tinkering with mopeds, moved on to Vespas, and even worked for a time with a classic Vespa and Lancia restoration company. He attended the Technical University of Delft with the ambition to become a car designer. After graduating, he embarked on an epic road trip in a 1962 Vespa along the Silk Road through Eastern Europe. Along the way, he discovered an old Russian Vostok watch at a flea market in Georgia. It became his companion on the road and sparked his interest in watches. When he returned to The Netherlands, he spent some time working with professor Bruno Ninaber van Eyben, a renowned Dutch jewelry and watch designer who also designed the Dutch Euro coin. 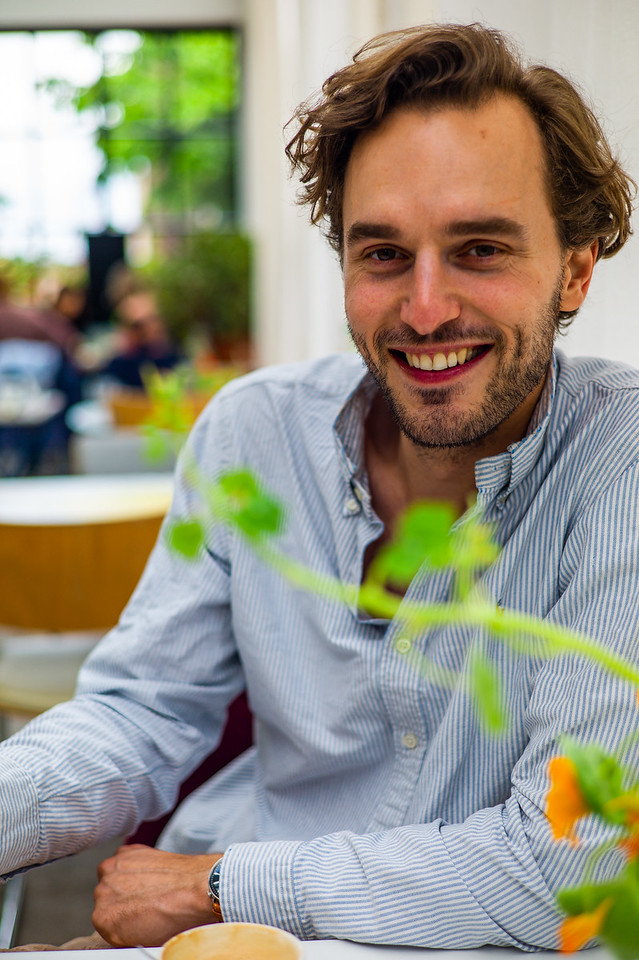 “At Studio Ninaber, I learned how to use a CNC lathe and mill, and a few other tricks of the watch design/development trade, focusing mainly on case making and development,” says Laurens. “At the studio, I made important steps in the development of my first series of watches, producing my first working prototype.” A year later, he built his own workshop and set up his own CNC mill and lathe. “The past three years have been all about developing and building up the workshop, and how here I am, launching my first series of watches.”

Guided by the principle that form follows function, Laurens created a case that rotates up to 90 degrees — to make it easier to read the watch while gripping the steering wheel. The 12 o’clock position on the dial can thus be anywhere between the normal position between the upper lugs to the 3 o’clock position. The crown, attached to the inner case and movement, acts as the stop at either end of a slot in the outer case, which is attached to the lugs. It clicks into position via a tiny (0.4mm) spring that moves through the ribbing of the outer case. 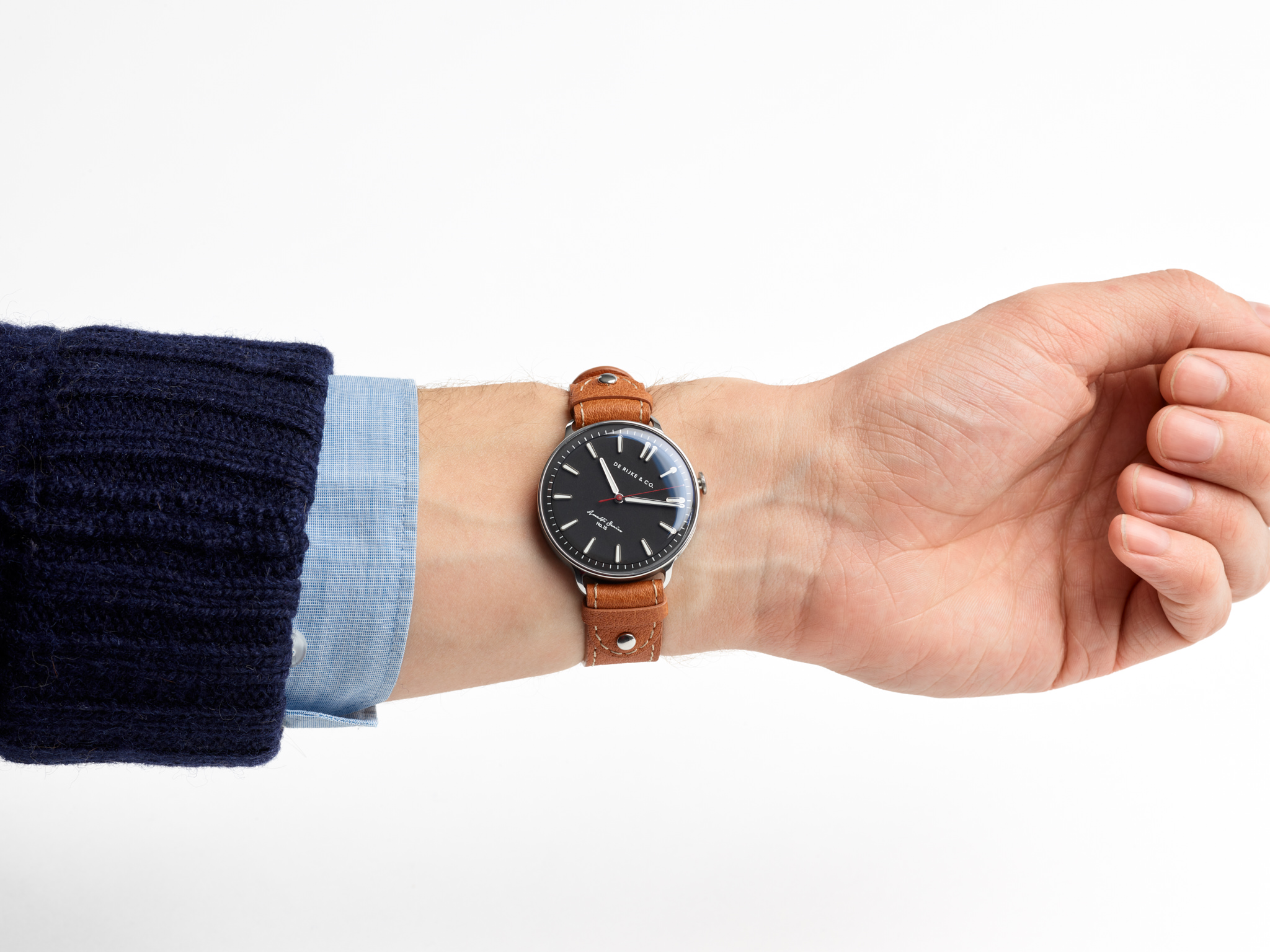 A thin bezel makes for a large dial, which makes the watch look bigger than its 38mm width and, along with stretched-out hands and an anti-reflective crystal, helps optimize readability. The strap, made by hand by an artisanal Belgian company, can be easily worn on top of a shirt or racing gear. It can also be easily swapped out for a NATO strap. The lugs are solid rather than being equipped with spring bars, so the strap threads through the lug from beneath and fastens to itself, button style. 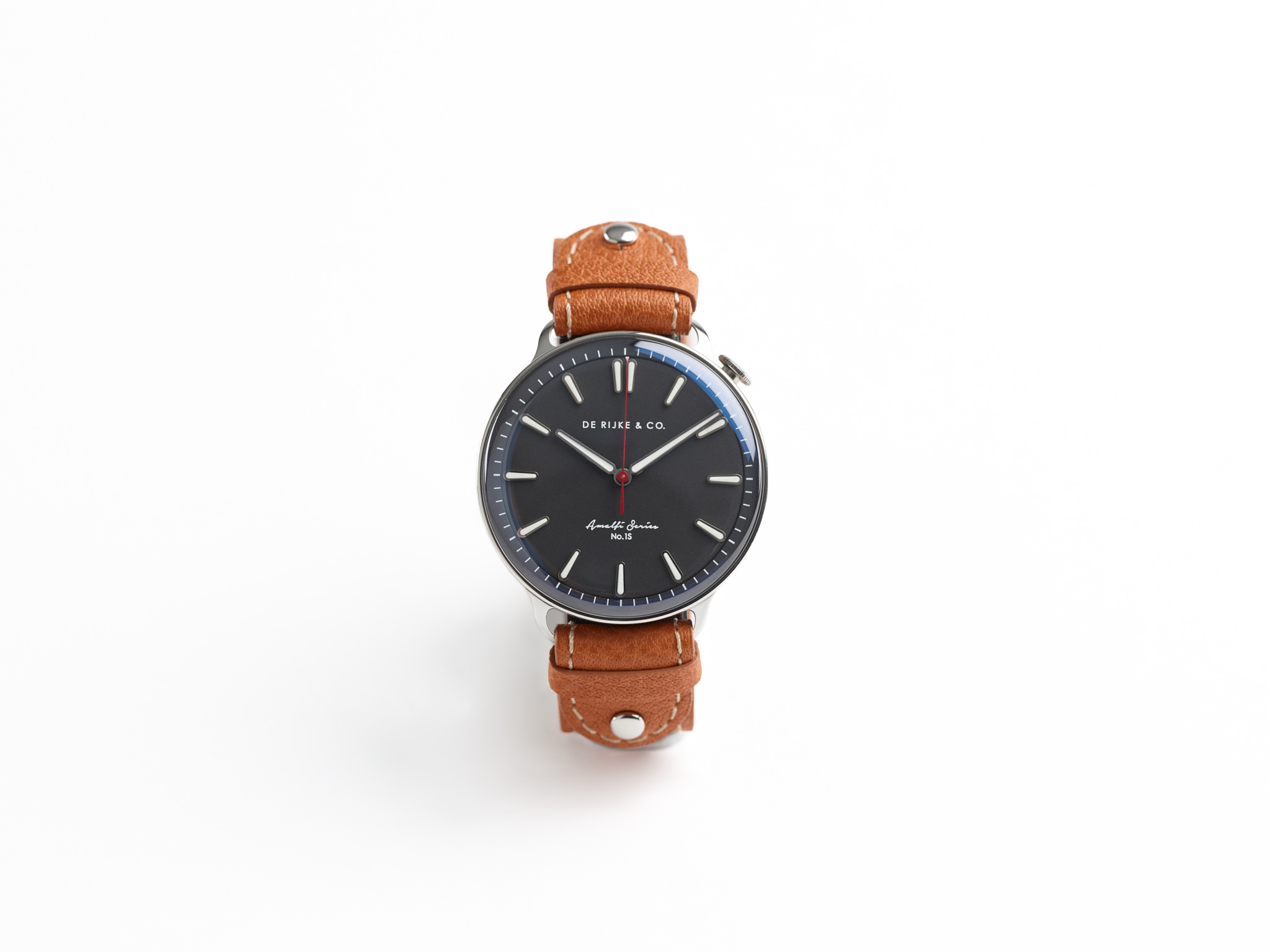 The 316L stainless steel case is made in-house, as is the black lacquered dial, except for the pad printing, which is done by a specialized printing company in The Netherlands. The case has a screw-down crown, so the watch is water-resistant to 50 meters. The applied indices are silver-plated and hand-painted by De Rijke, and the hands are laser-cut by a highly specialized German company, then finished by hand in-house. The movement is the automatic Sellita SW300, an ultra-slim movement with a 42-hour power reserve. 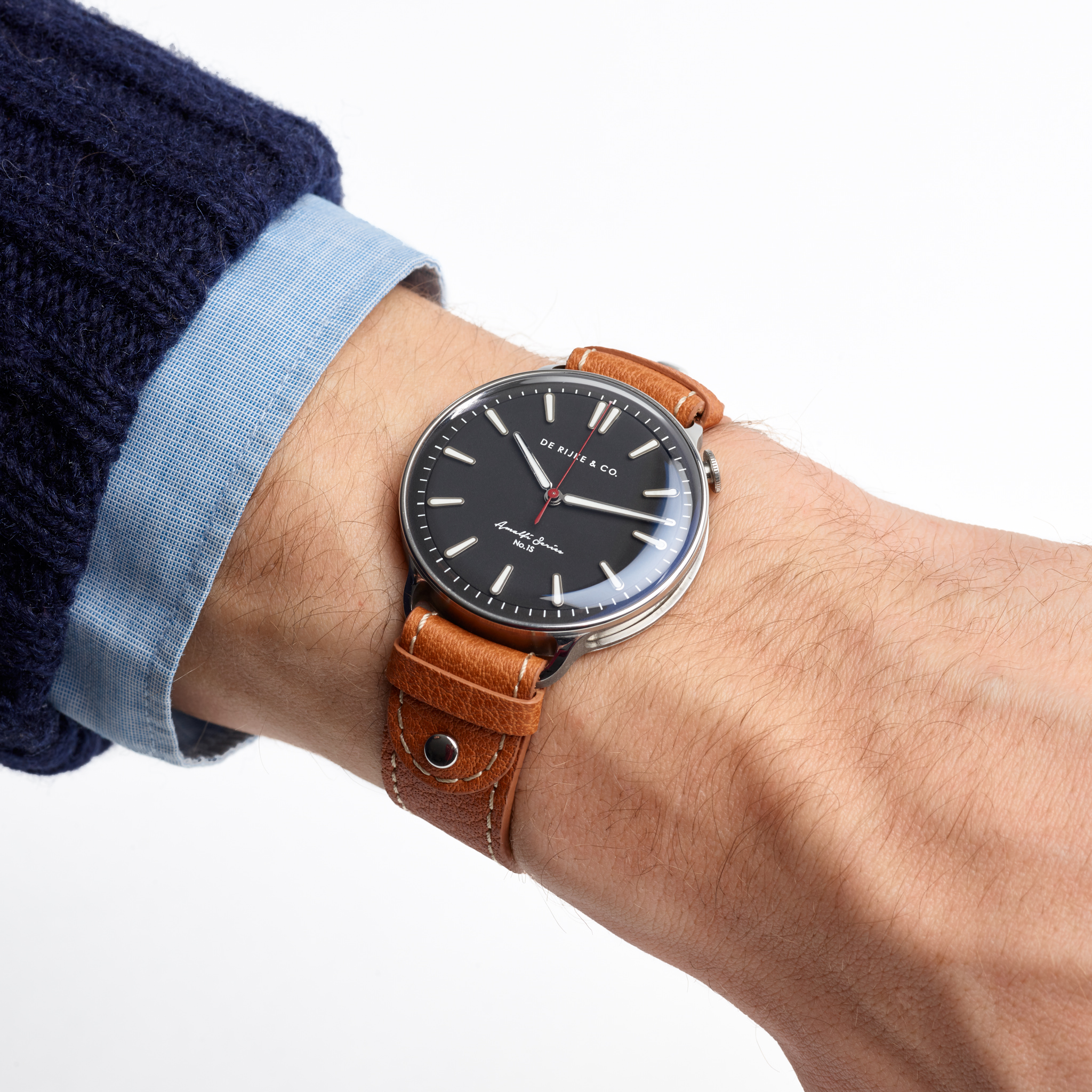 The Amalfi Series No. 1S is currently made to order, with delivery time around 4-6 weeks. There are three versions: a non-lume version that is limited to 99 individually numbered pieces; a Super-LumiNova version that is not limited; and a Super-LumiNova in Vespa white. It is priced in Euros at €2,309 and can be ordered at www.derijkeandco.com. De Rijke is also set up to take bespoke orders. The dial can be painted any desired color, and finishes can range from frosted copper to frosted stainless steel. Some of these possibilities can be seen on Instagram @derijkeandco.