Edox Classe Royale Revisited: Watch With Many Faces: Looks Good In Each

I fondly mentioned the Edox Classe Royale line of watches before, but since then have garnered new appreciation for the line. Though I retain my previous positive sentiments regarding the impressive symmetry of the watch. The design has a distinct appeal that transcends among many different watch lovers. It is hard to dispute with the eye catching and eye pleasing looks of the Edox Classe Royale. Several years ago, Edox reinvented itself after a stint as a relatively obscure maker of quartz dress watches. The family owned company then decided to recapture its mechanical roots and produce a unique line of classy sport watches.

Edox is on a roll, and trying to market its watches aggressively as they should. Still, it is hard to penetrate lots of direct sales channels, such as retail. So you will probably not find Edox watches at your local department store. Fret not as Edox watches in all flavors can be attained with relative ease over the Internet.

Expanding on my discussion of the Edox Classe Royale, I feel it proper to mention other models of interest. I previously discussed the chronograph version as well at the small seconds. Each automatic mechanical movement based watch. The small seconds is a bit of a misnomer as the lower centered subsidiary seconds register is quite large for a small seconds display, but looks great. The chronograph is based on a Valjoux 7750 movement. I would like to mention two other Edox Royale models worth mentioning both based on the wonderful ETA 2892A2 movement. First is a partially skeletonized 5 minute repeater, along with an open heart model (cutaway view of the balance wheel and escape train).

The minute repeater (Edox Royale Grand Complication) as it is a rare complication in this price segment, but cleverly implemented by Edox. Using an ETA 2892A2 movement as a base, they are able to place a 5 minute repeater module within the watch. This give you a true mechanical 5 minute repeater (chimes each 5 minutes if turned on) for a very reasonable cost. I will likely talk more about the ETA 2892 series of movements as it is the first choice movement among watches from a few thousand dollars to tens of thousands of dollars. A truly dynamic and flexible watch movement. 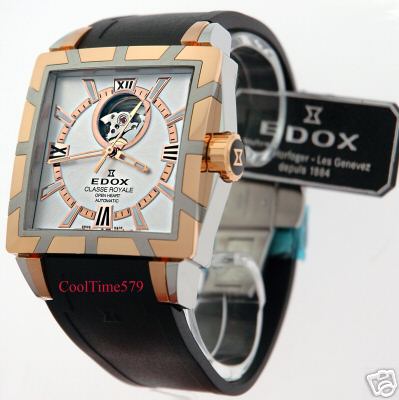 The Edox Classe Royale Open Heart feeds on the tourbillon watch popularity by offering a view of the movement. Here, a circle is cut allowing you to view the balance wheel in motion along with the escape wheel. This is a nice touch because it does not require an absurdly complex movement, and it allows for greater appreciation of the already impressive mechanical movement within.

Another think to like about the Edox Royale line of watch is the sheer number of options. Along with the varying complication, you can opt for leather or rubber straps, steel or gold cases, and a number of face color combinations giving a textured or checkered look depending on your tastes. I credit Edox for creating a watch with a true wide appeal.