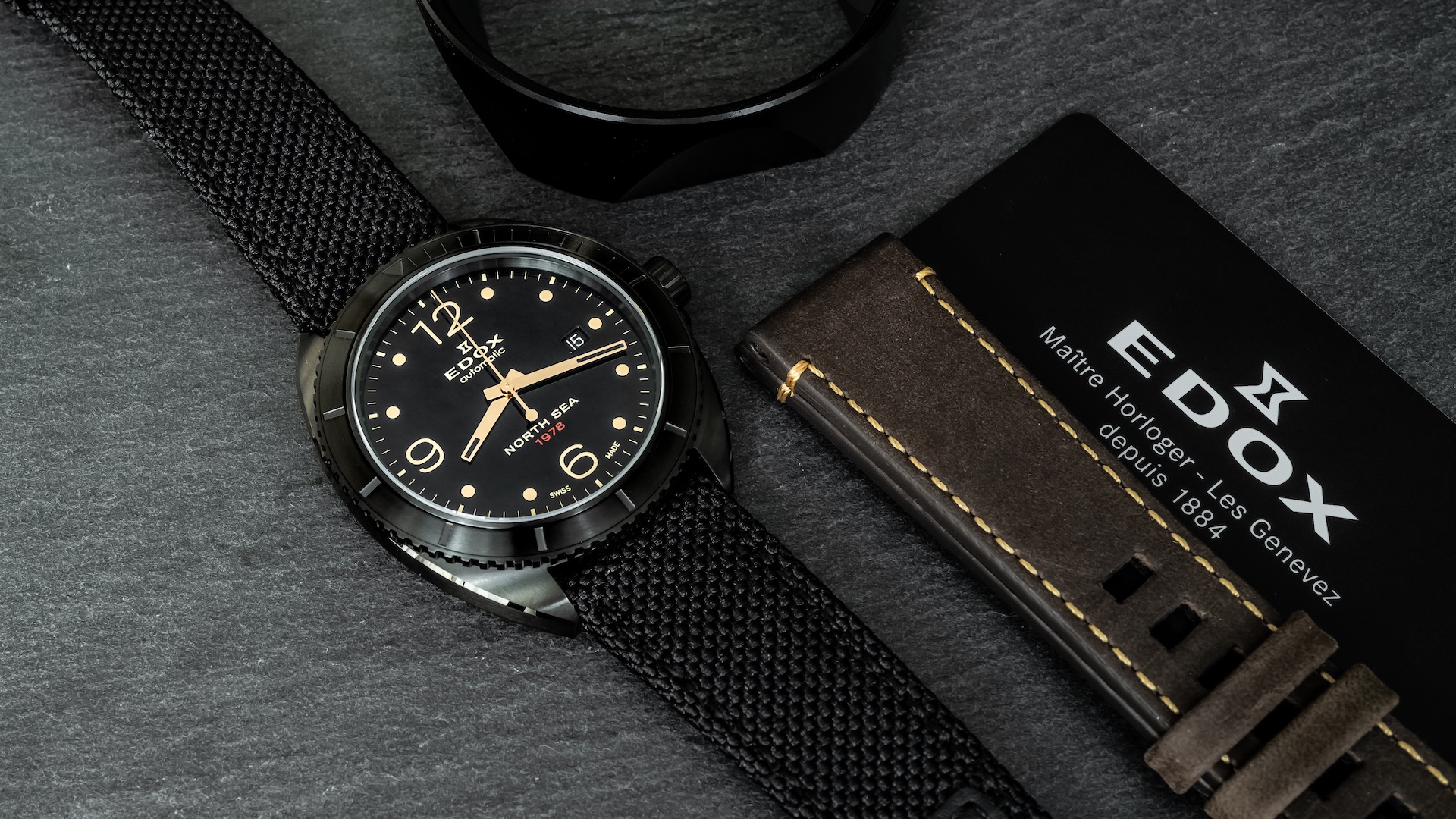 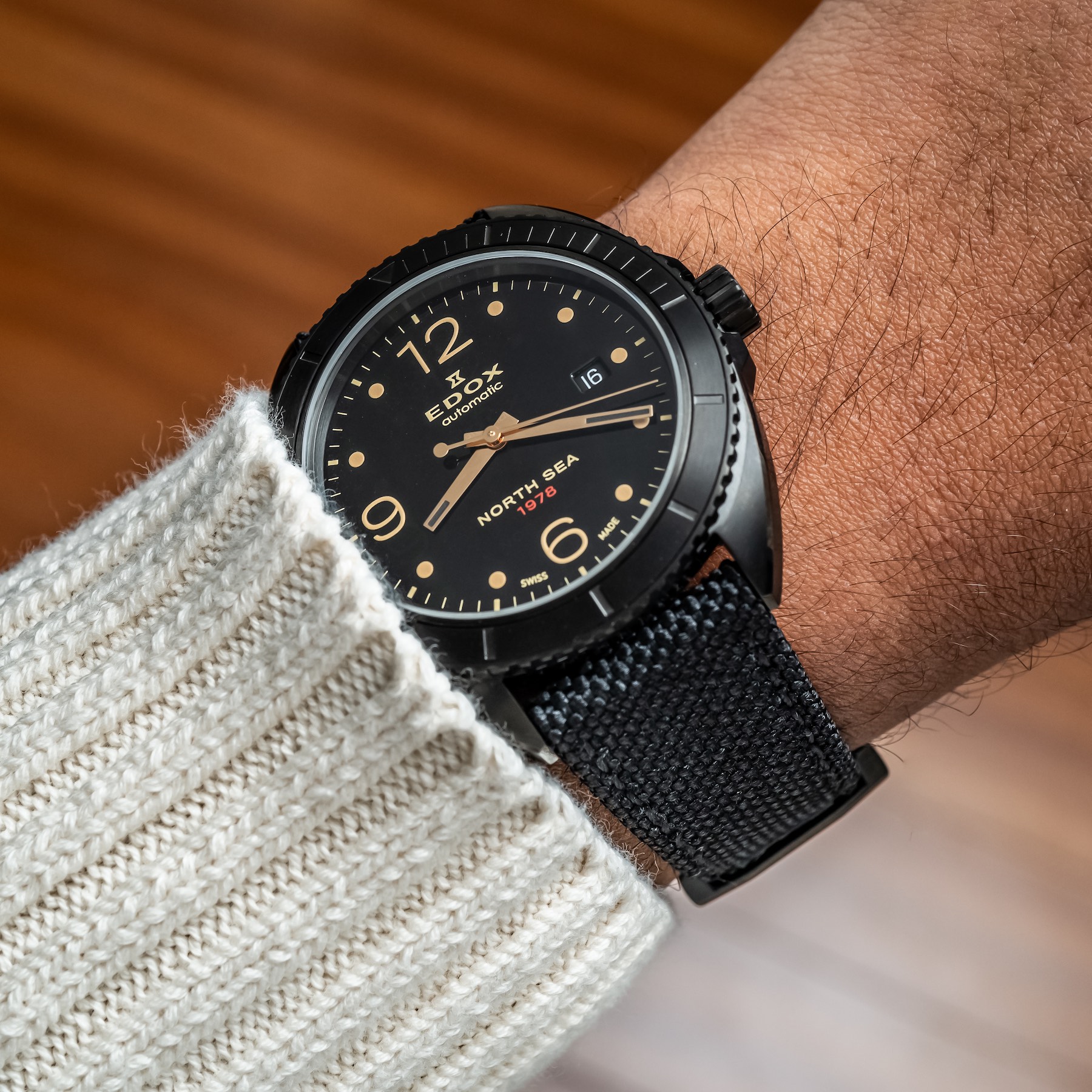 Edox is one of those low key Swiss watch brands that has been around forever, but I never really spent time with any of its pieces, until now. This Edox North Sea 1978 is a diver that gets a lot of things right and offers something a bit off the beaten path in the crowded sub-$2,000 space.

Dubbed the “Inverse Moon Landing” by Edox, this North Sea 1978 pays tribute to a harrowing 320M dive in the freezing cold waters just off the coast of Skånevik in Norway. This was an especially dangerous dive in which one of the men lost his life, making for a tale that is absolutely harrowing. Not to make light of this tragedy, but the story behind this dive is fascinating and there’s quite a bit of intrigue, as well. I have not finished watching it, but the documentary “The Deepest Dive” is worth watching for anyone interested (it’s streaming for free right here). These divers wore Edox watches during the dive, and I can firsthand confirm that several divers who were part of the 1978 dive are not only purchasing this North Sea but have a real affection for the brand. 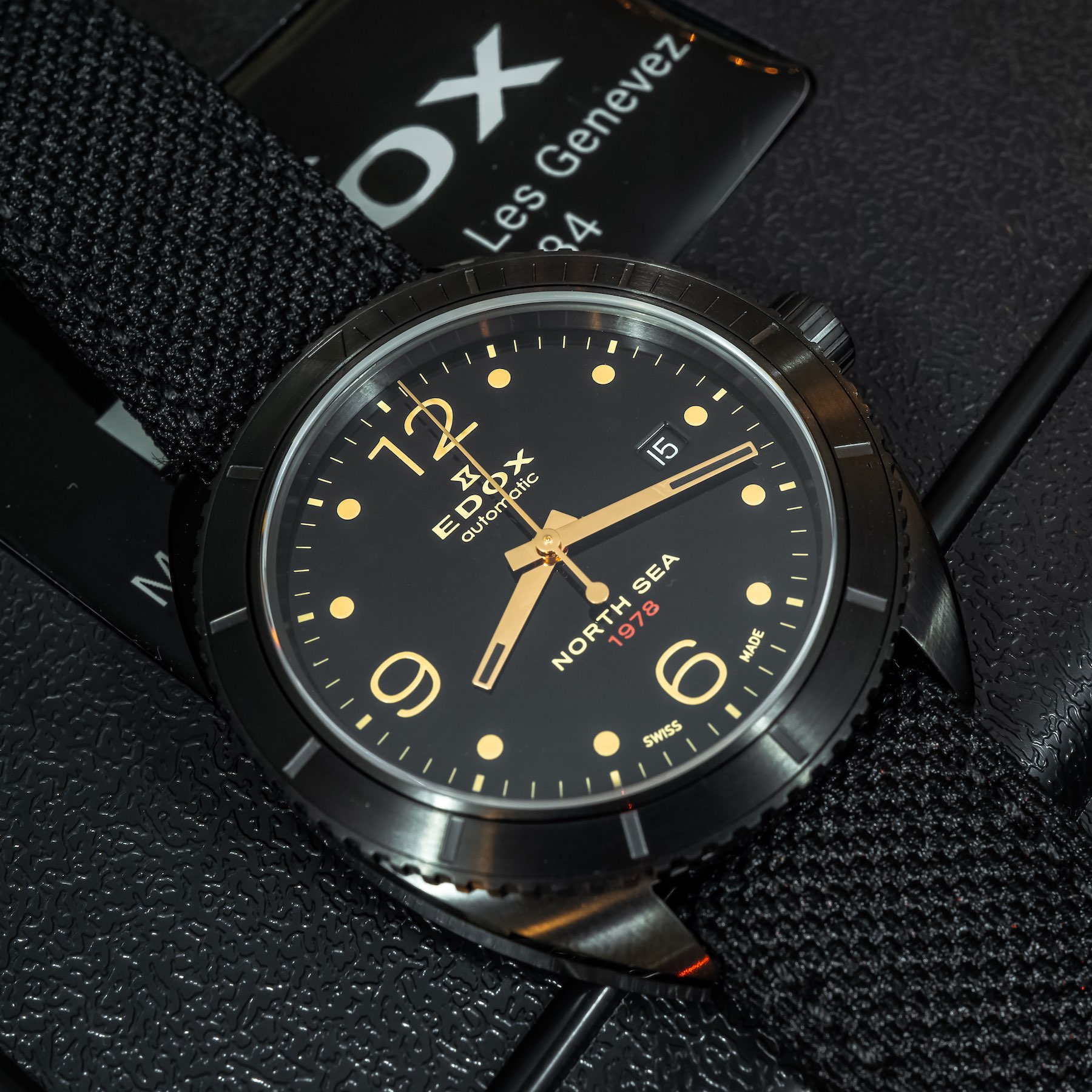 Back in 1961, the Edox Delfin was introduced, and it eventually earned the moniker of “the water champion” due to features like a double-caseback, double-gasket crown, and impressive shock and water resistance. It’s funny that the Delfin is still around but has been reimagined in a very contemporary case. In fact, the North Sea looks a lot more like the old Delfin than the actual existing Delfin. 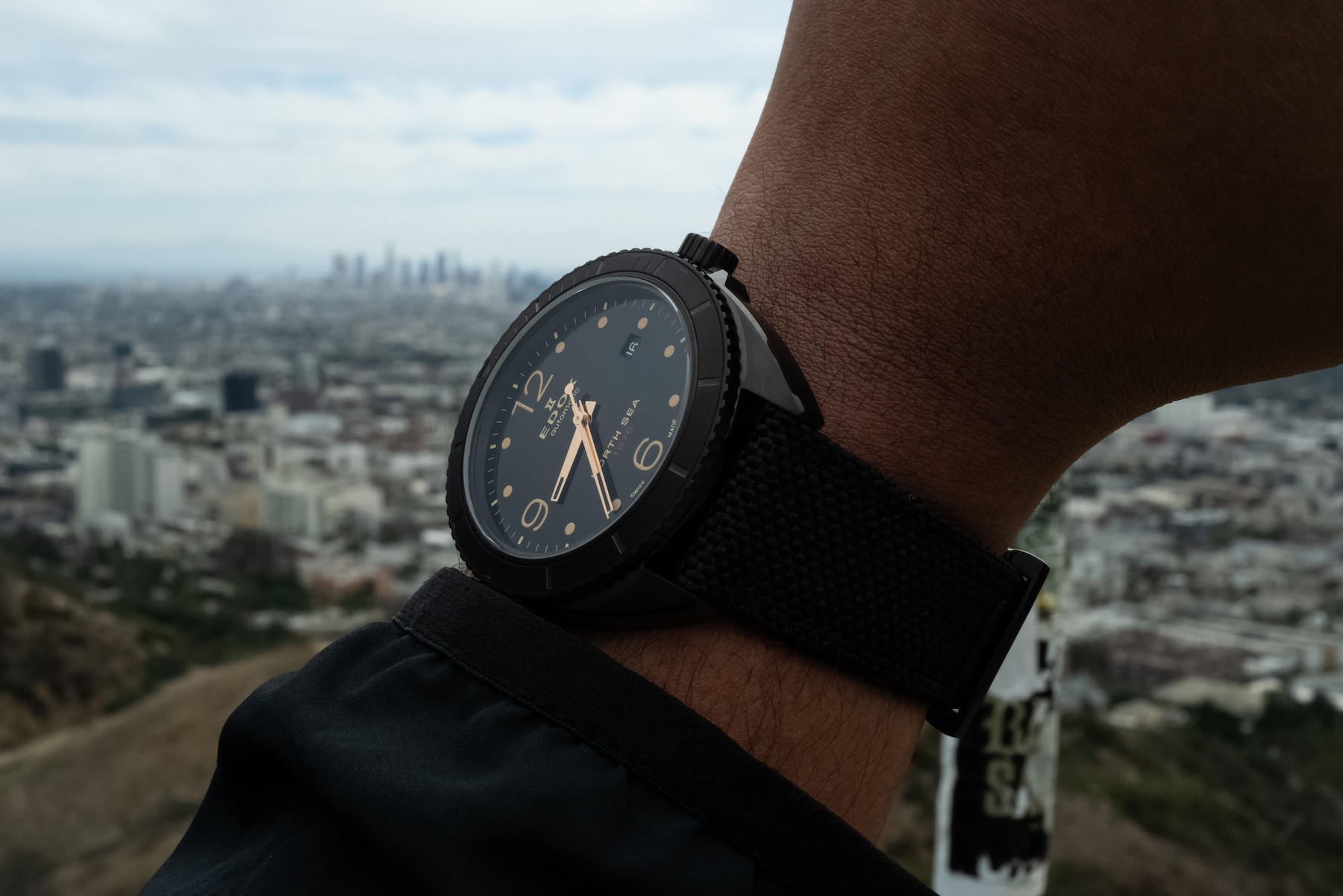 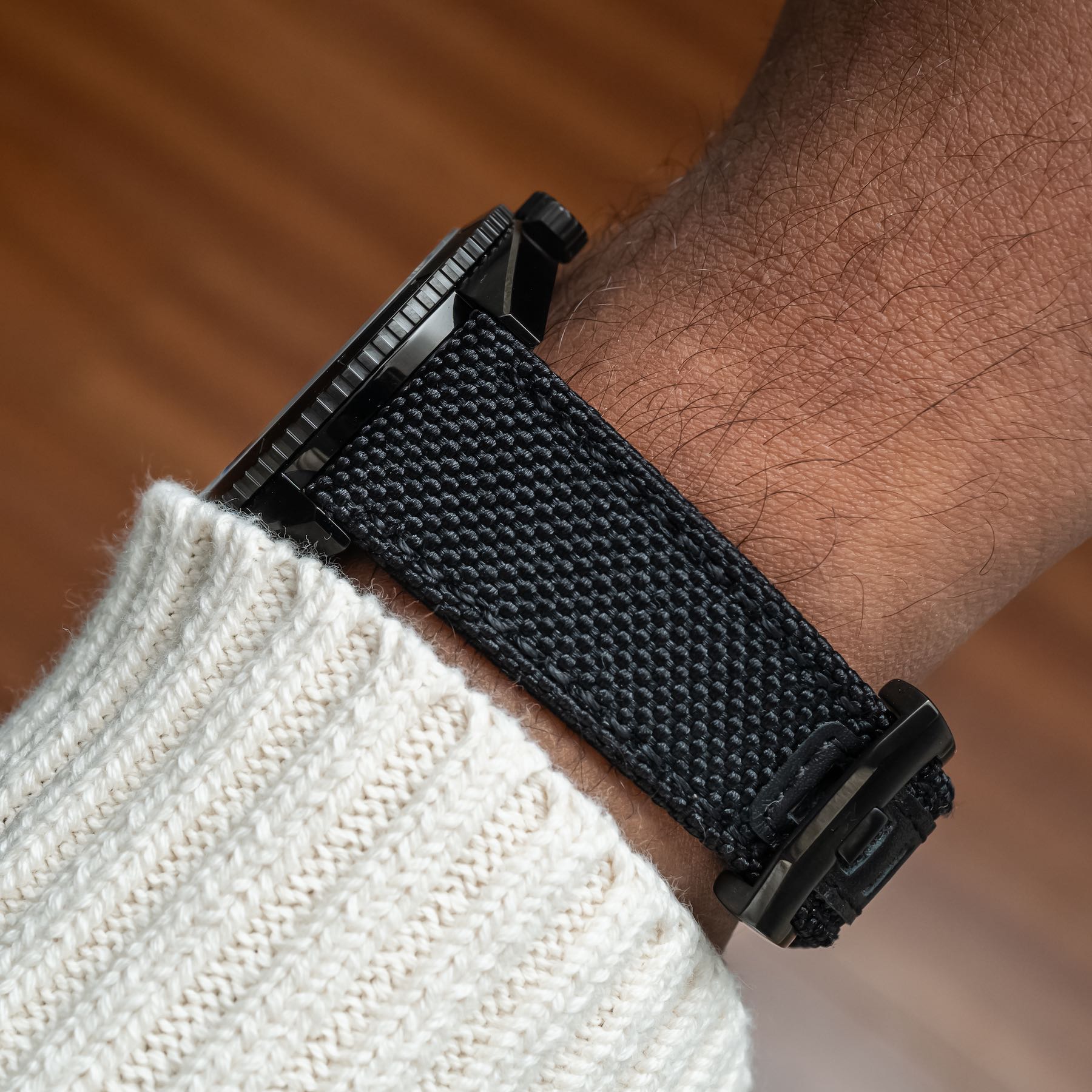 The Edox North Sea 1978 measures 43mm-wide with a lug-to-lug measurement of 48.5mm. In spite of the rather large 43mm case size, the short lugs keep the North Sea 1978 fairly wearable for someone who would ordinarily top out at 40 or 41mm. Interestingly enough, Edox says the case thickness is 14mm, but my calipers have it at just around 12.75mm thick, so I am not sure what’s going on there. 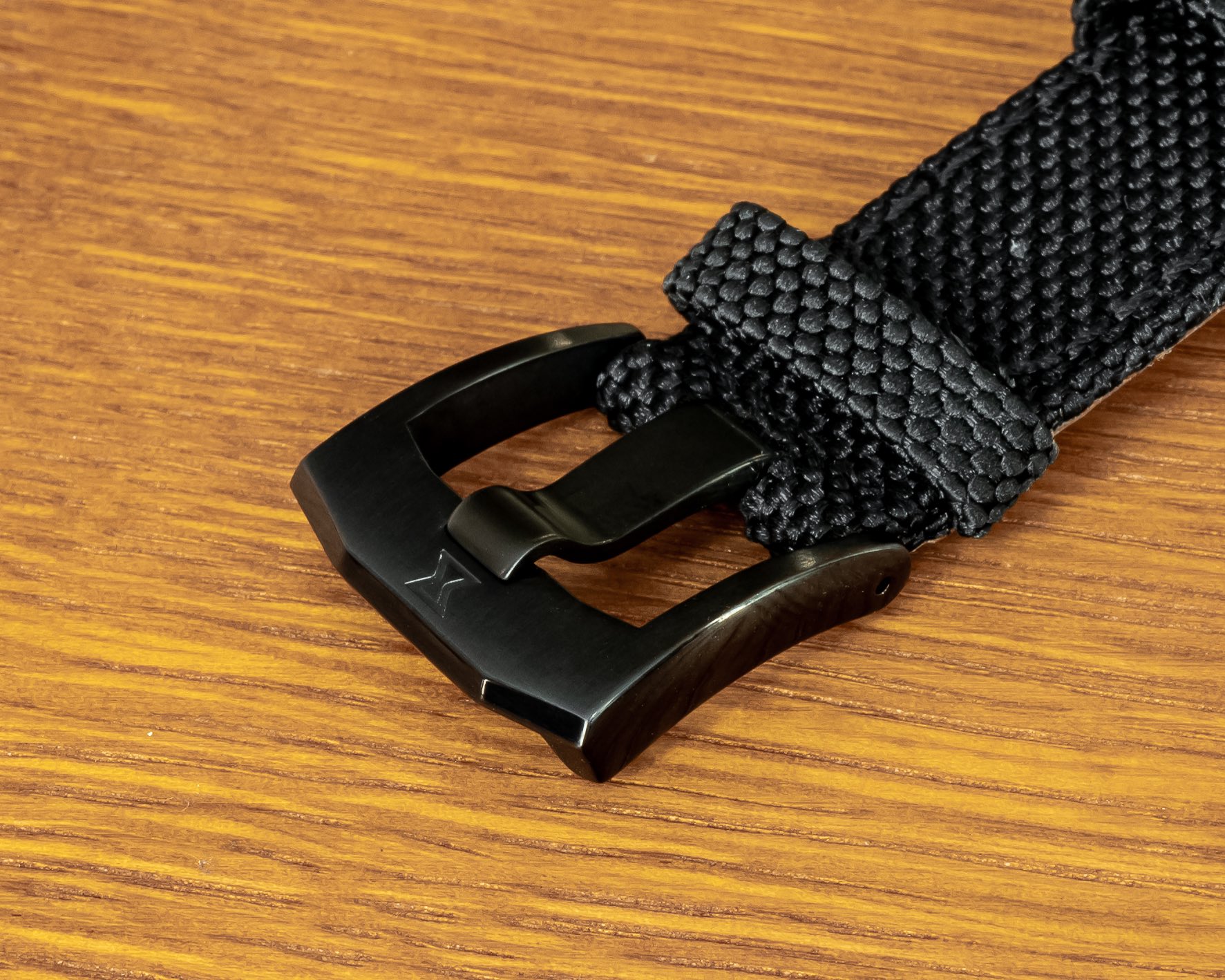 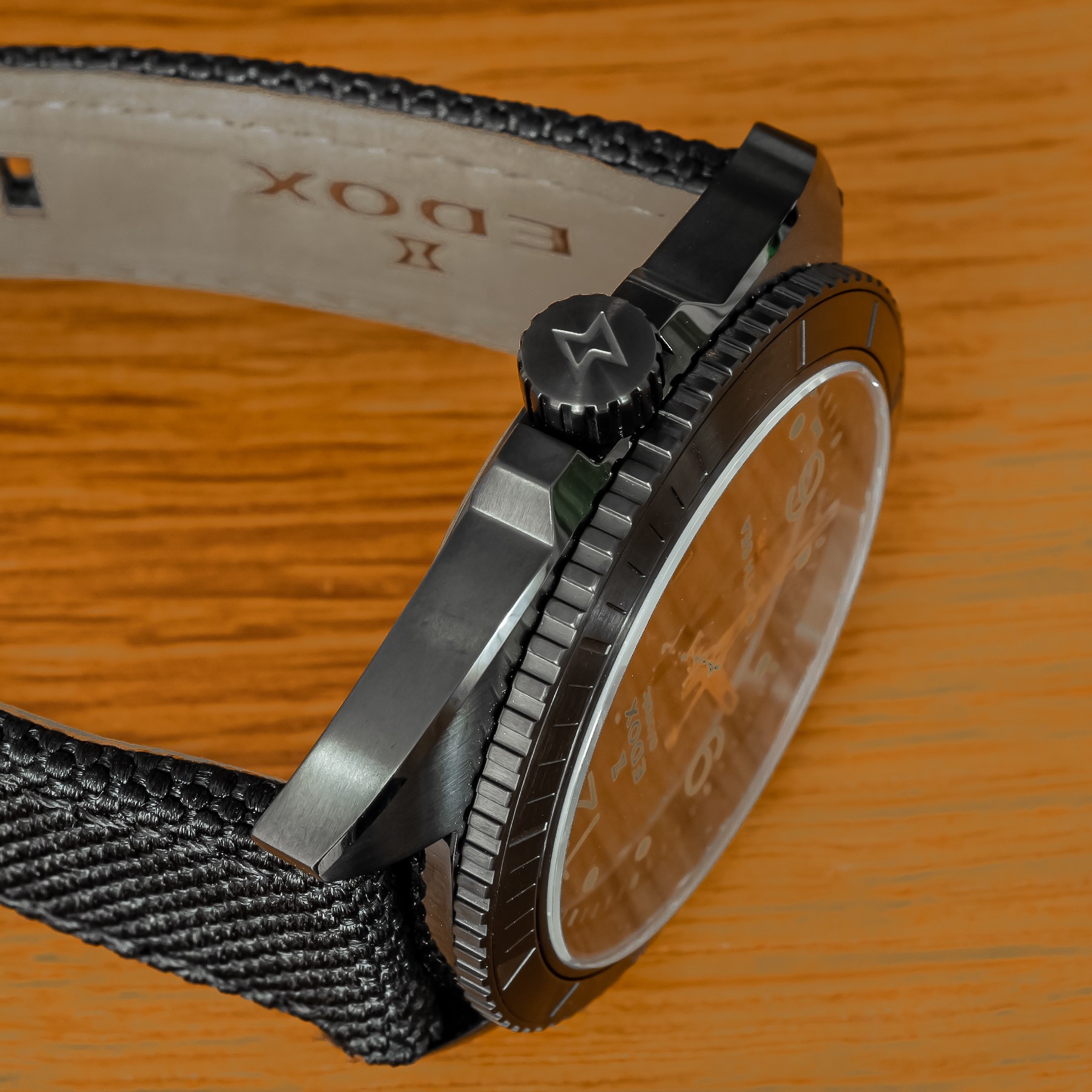 The unidirectional bezel is done in a brushed matte-black ceramic and matches nicely with the black DLC-coated steel case. I know black DLC isn’t everyone’s cup of tea (including myself), but it matches the dial and bezel nicely, and having that extra scratch protection never hurts. Obviously, water resistance would need to be up to par for this watch, and the North Sea doesn’t disappoint with 320M. Not just a random number, the North Sea dive in 1978 was 320M deep, so this modern Edox is just as tough as the pieces made back then. 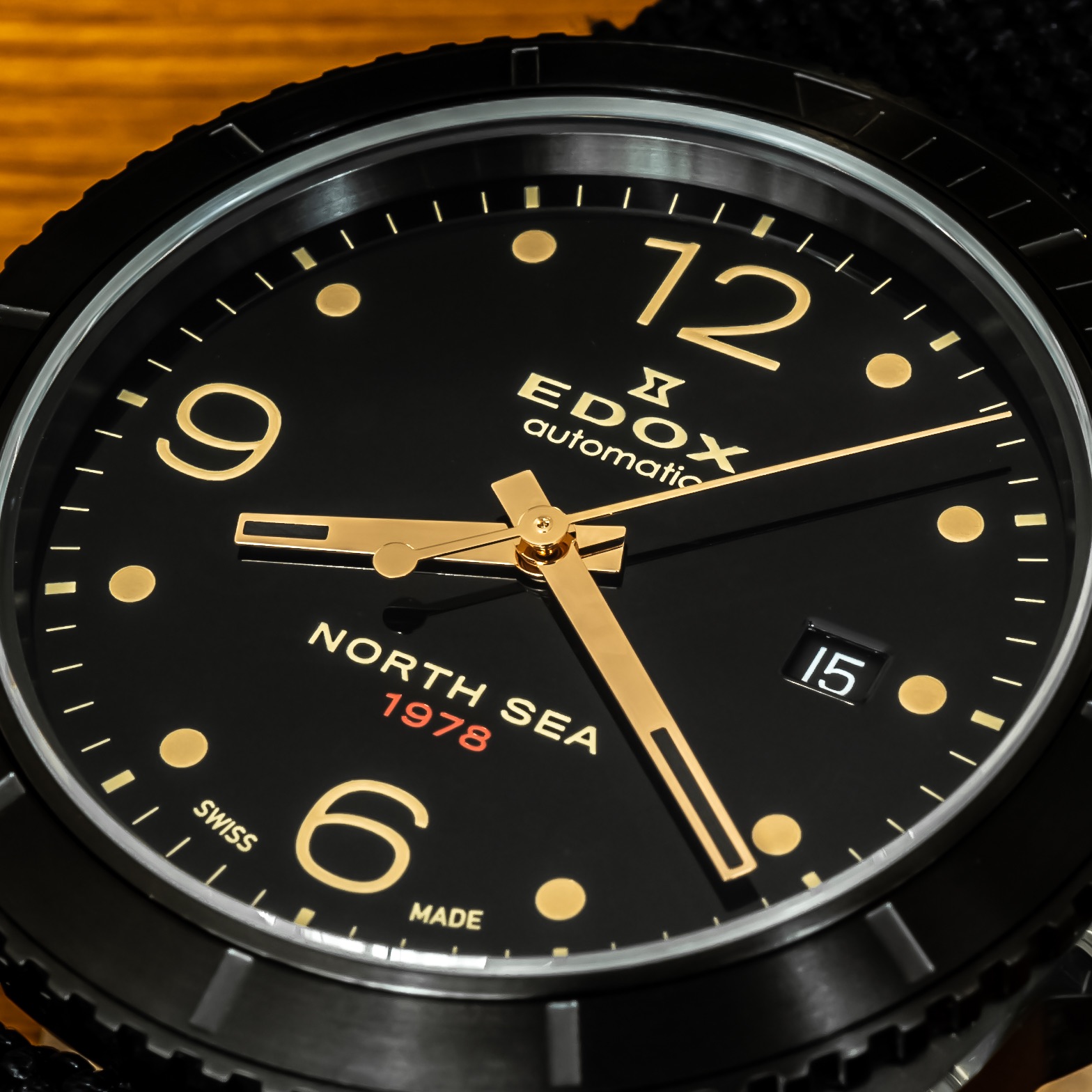 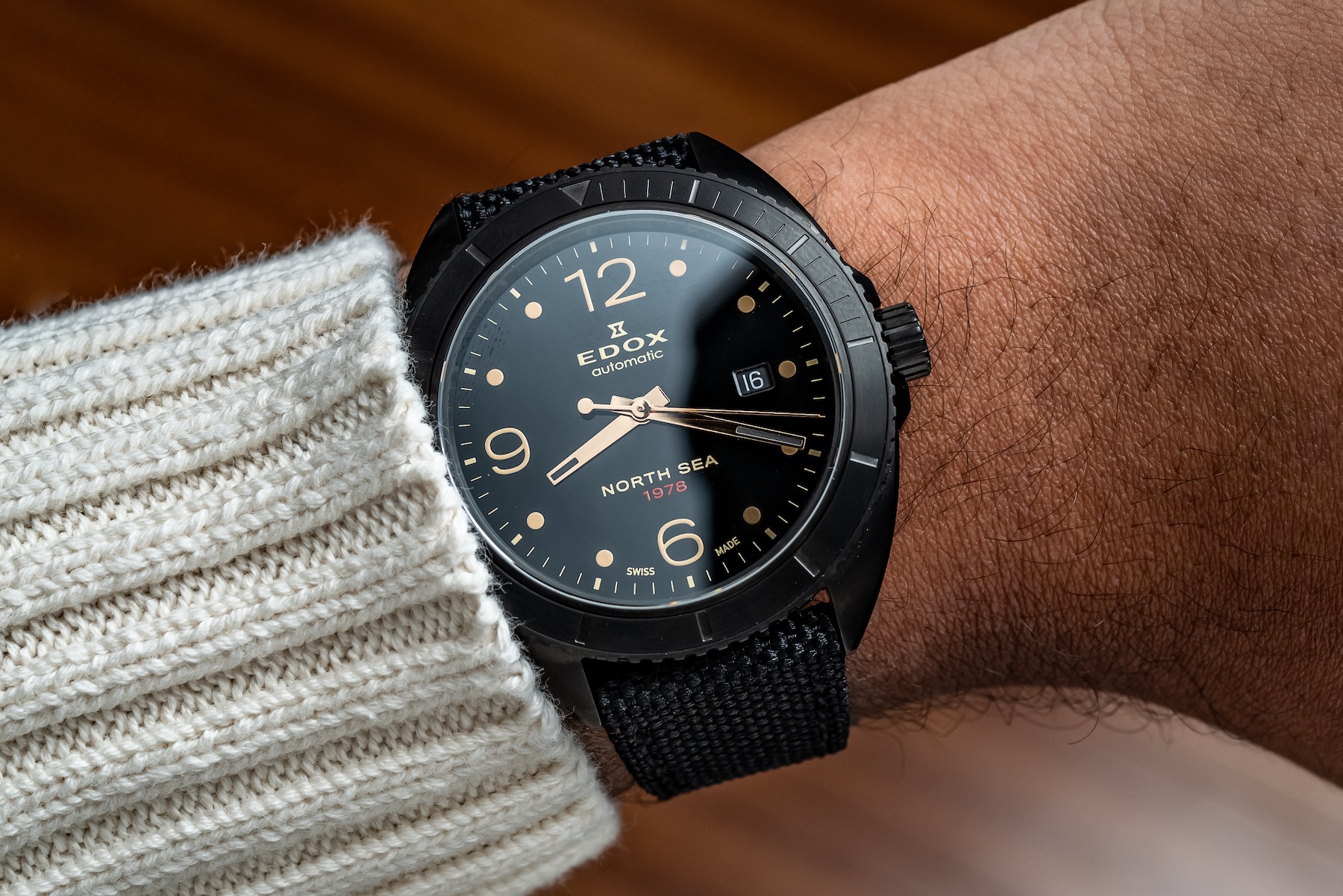 When I first saw pictures of the North Sea 1978, I was immediately fixated on the hands looking just a bit too polished for legibility. I was pleasantly surprised when handling the watch in the metal to learn that, due to the ample AR coating on the sapphire crystal (hint-hint to all the brands who refuse to do this), the dial and hands are, in fact, very legible. The black and gold color scheme really grew on me, to be honest. The hands and indices are lumed, but the review unit didn’t have it (it happens), so I can’t really comment on its luminescence.

Having hour and minute hands of a proper length, a matching date window, and stylistically interesting non-generic Arabic numerals go a long way in the perceived quality of a watch. This is especially true in the hyper-saturated and competitive world of ~$1,500 dive watches. 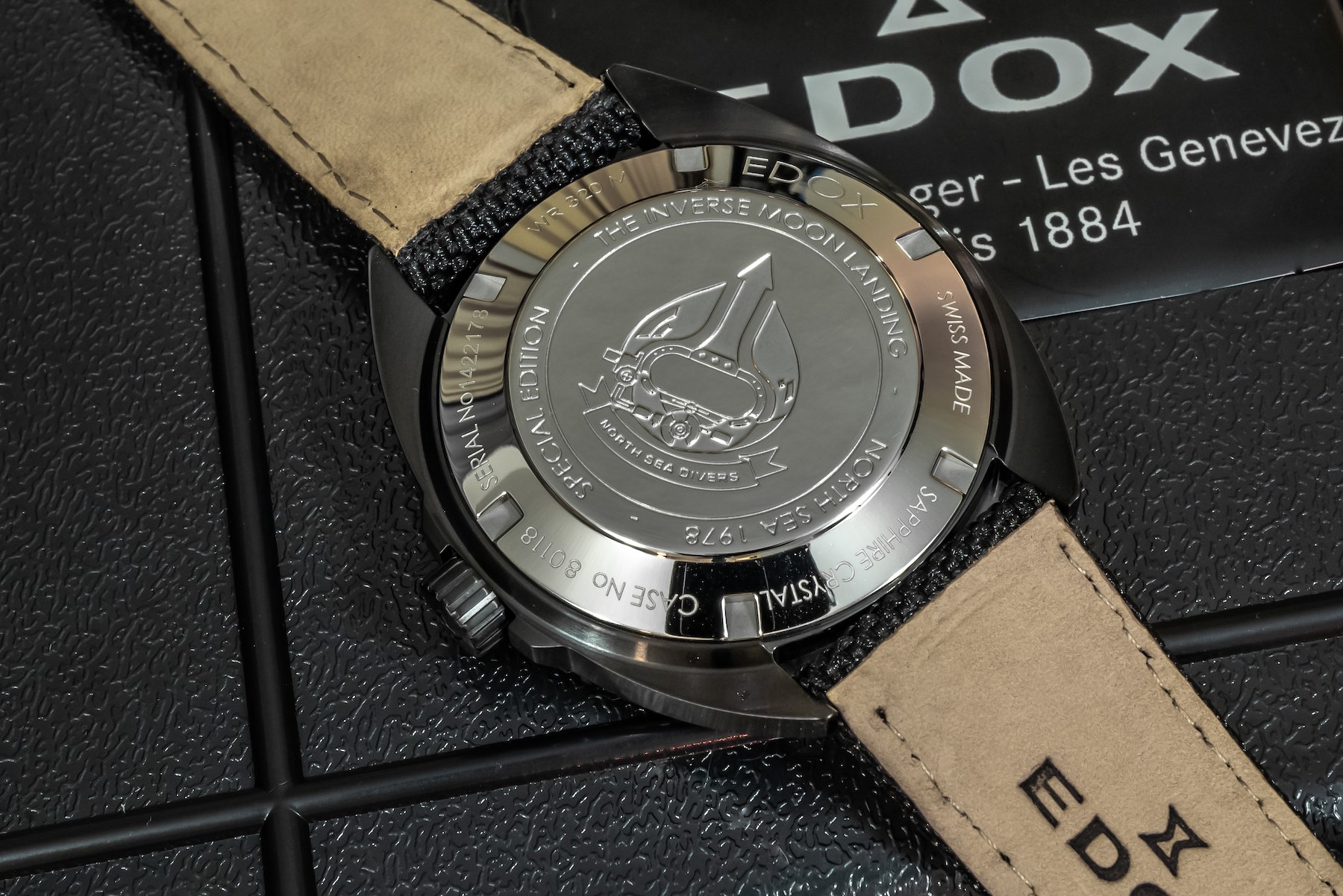 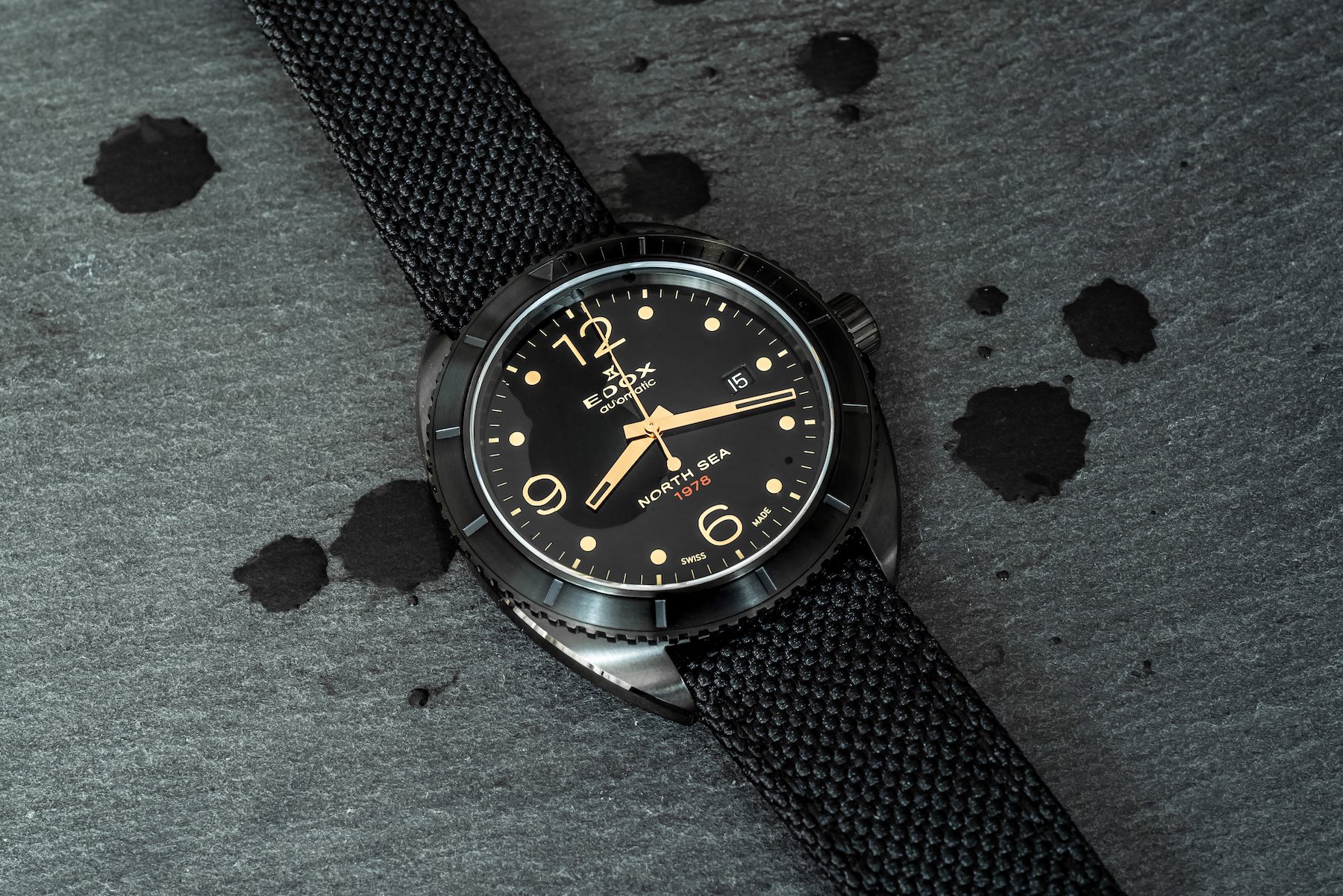 The enclosed steel caseback has the North Sea Divers logo engraved on it and is fairly straightforward, though I would have considered not having it be quite so polished. Inside is the Caliber 80, which is based on the Sellita SW 200. Operating at 28,800 vph, the North Sea 1978 has a just-shy-of-a-weekend 38 hours of power reserve. It has a quickset date feature and in fact does have hacking seconds. Though it helps with water resistance here, I always give brands credit when they opt for an enclosed case back rather than trying to show off a movement with middling finishes. Again, if it’s good enough for Rolex, it’s good enough for just about anyone else.

The North Sea 1978 comes on a fabric strap with leather lining, as well as a brown leather strap (no quick-change system, though). A solidly built and surprisingly versatile dive watch, the Edox North Sea Automatic 1978 “Inverse Moon Landing” is very fairly priced, in my opinion, at EUR 1,490. You can learn more at edox.ch.