Swiss ETA movements are growing up. No, not maturing exactly, but literally growing larger. They need to be! Most of the ETA movements in your favorite watches were designer in the 1970s. Nothing wrong with that, but they are designed for smaller watches. The trend for larger watches is not going to diminish and larger watches need larger movements. Why? Well a few reasons. Size in the case is actually not a major reason. It has more to do with the hands. Ever notice how larger watch faces often have hands that look too short? Well I do because this is a major pet peeve of mine. I hate stubby hands which are too short. Sometimes this is just bad design, other times this is technical necessity. Larger hands weight more and require more torque to move. The smaller movements just weren’t designed for hands that look proper on today’s larger sized watch faces. Sure there are exceptions, but generally the existing movements can’t handle the hands. Well the new larger ETA movements are all titled “Valgranges,” and will initially come in four movement models.

Watch movements are typically measured in “lines.” I am actually not totally sure what this means. For example, the Valjoux 7750 movement is 13 1/4 lines (or 29.89mm wide). The new Valgranges A07.211 with the same complications (time, chronograph, day, and date) is 16 1/2 lines (36.6mm wide). Two movements with the same complications, but one is larger for larger sized watches. The new Valgranes movements will be able to have about 46 hours of power reserve and be able to handle the larger caliber watches that are common today. Hopefully this will be an end to stubby hands everywhere! By the way, here is a little info direct from ETA on what the “lines” measurement is:

Following a centuries-old tradition, watchmakers use lines rather than millimetres to describe the size of the movement’s diameter. This measurement is generally indicated as a triple apostrophe, so 16 1/2 lines is written as 16 1/2´´´, or 37.22 mm diameter. The line, or Parisian line, is an ancient watchmaking measurement that predates metrification and is a direct descendant of the French pied (foot) measurement used under the Ancien Régime. Each line is equivalent to 2.2558 mm, which is rounded up to 2.26 mm for ease of calculation. In the past the French foot used to correspond to 12 inches measuring 12 lines each. 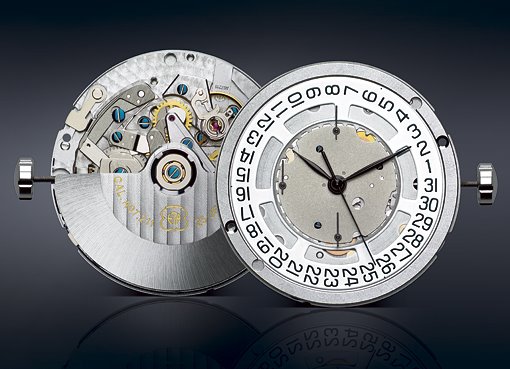 I don’t think that the popular Valjoux line of movements will stop being used, in fact I think they will be used quite a bit, but expect to see new Valgranges watches in many of the watches that will be coming out – already a good deal of watches have the Valgranges movements that have been out for a little while. Let’s look over the new movements.

In addition to the roughly 37mm width the movements will be 7.9mm thick. Not exactly the thinnest watches around, but when was the last time you had a large and very flat watch? I don’t wear anything under around 12-16mm thick anyway these days. The movements shown are of the higher grade that ETA offers – you can tell by the blued screws, cotes de Geneve finish on the rotor, and the perlage polish on the movement. Oddly, ETA is using the the naming mechanism typically reserved for quartz movements. It used to be that if you saw a XXX.XXX movement, it was obviously a quartz movement, but these are clearly not. That means you have just one more odd naming convention to remember, as if you didn’t have enough little quirks to consider in your life as a watch lover. I suppose most of us will just say something like “Valgranges 171” (for example) to refer to the GMT version of the movement. Look for the Valgranges movements to show up in more and more watches soon. Anything 44mm and over will likely start to see the movements in them, especially anything coming out of the Swatch Group that also owns Swiss watch movement maker ETA.