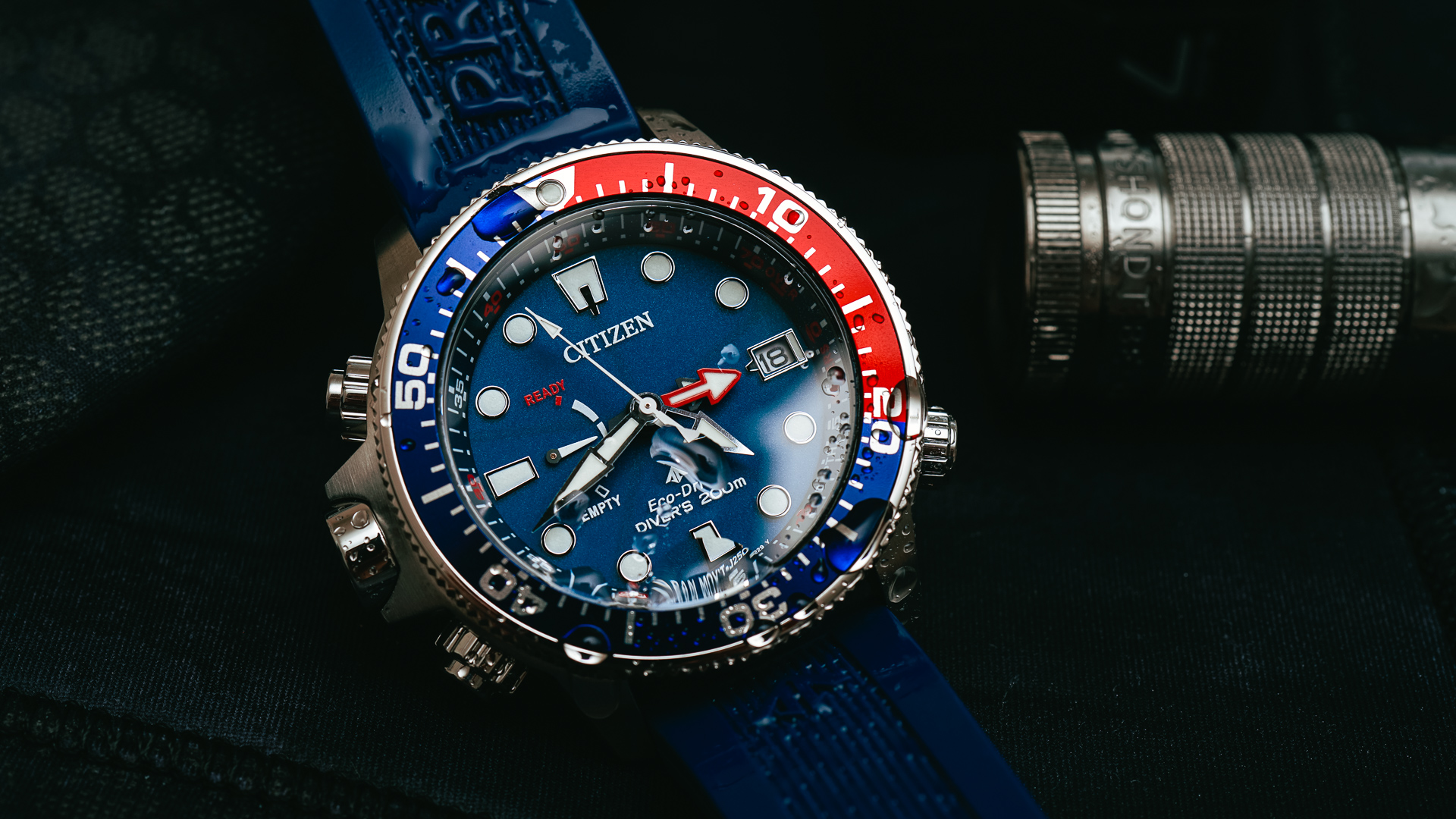 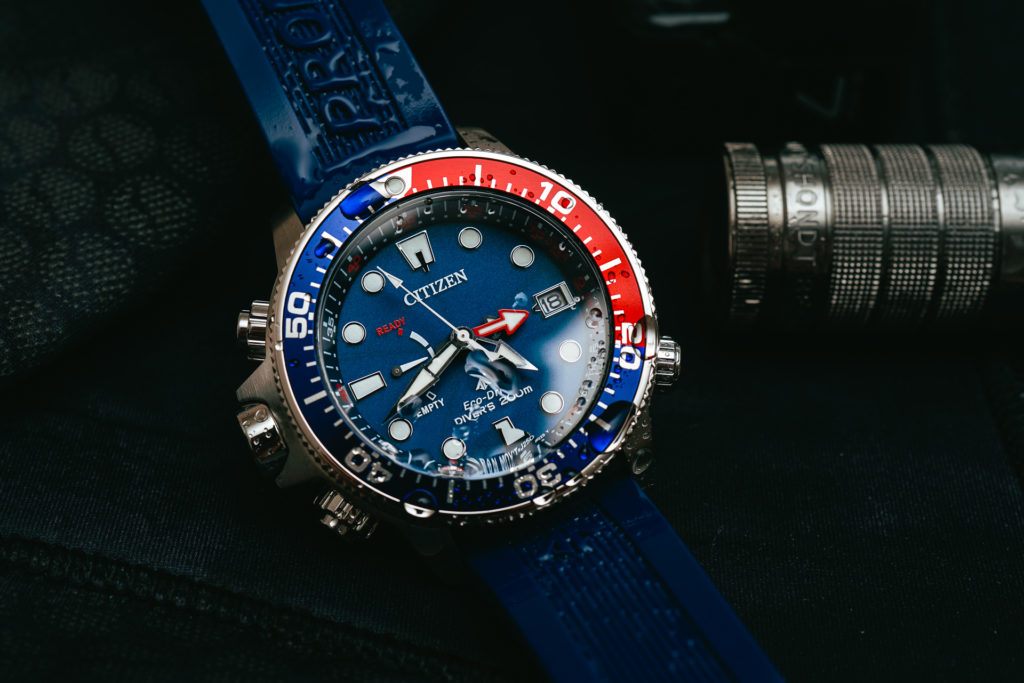 I’ve never been seasick before. But right now, I’m gripping the sides of a red and white buoy that’s heaving to and fro, at the mercy of a fresh two-meter swell rising out of the Pacific, and I desperately need to puke. All around me, raindrops scatter the surface of Potrero Bay as it rises and falls, but I don’t feel them under the thick 3.5mm hood of my wetsuit. “Are you OK?” my instructor Gauthier Ghilain asks, his concerned eyes piercing my fogged, low-volume mask. My stomach is in knots, preventing me from drawing deep breaths. The constant tossing of the buoy changes the positioning of the dive line, making it extremely disorienting to track underwater. I should be focusing on the horizon, but I glance at the Citizen Aqualand on my wrist instead, its depth-gauge history reading a current max dive depth of only around 40 feet — well short of the day’s targets. I’m stressed, and my overall comfort level is extremely low, resulting in a heart rate that’s far higher than it should be — particularly for the discipline of freediving, which demands total relaxation in order to fully activate the body’s secret “aquatic mode” that enables one to hold their breath without the limitations that come pre-programmed into our land-dwelling brains. 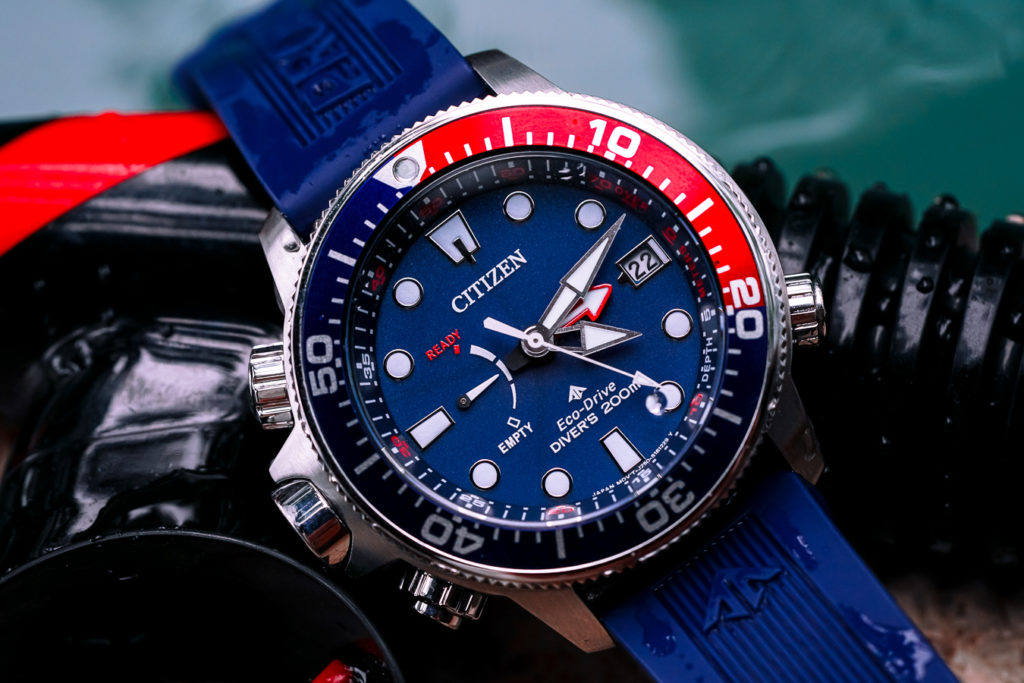 “I feel like shit,” is the most articulate response I can muster. “So do I,” he nods, half-grinning with all the reassurance of an elite athlete enjoying a home court advantage. Even if he’s lying, the tactic works. We’re both suffering, so I press on, fighting to regain composure. It’s what years of competitive cycling have taught me: not how to duck-dive with grace, or how to equalize the pressure in my ears while upside-down using the more efficient Frenzel method, but how to dig deeper and suffer just a little longer than the guy next to me. I wait for the next roller to pass, release my grip on the buoy, and awkwardly kick forward, body almost forming the correct “L” shape, and I plunge back down the swaying yellow line. 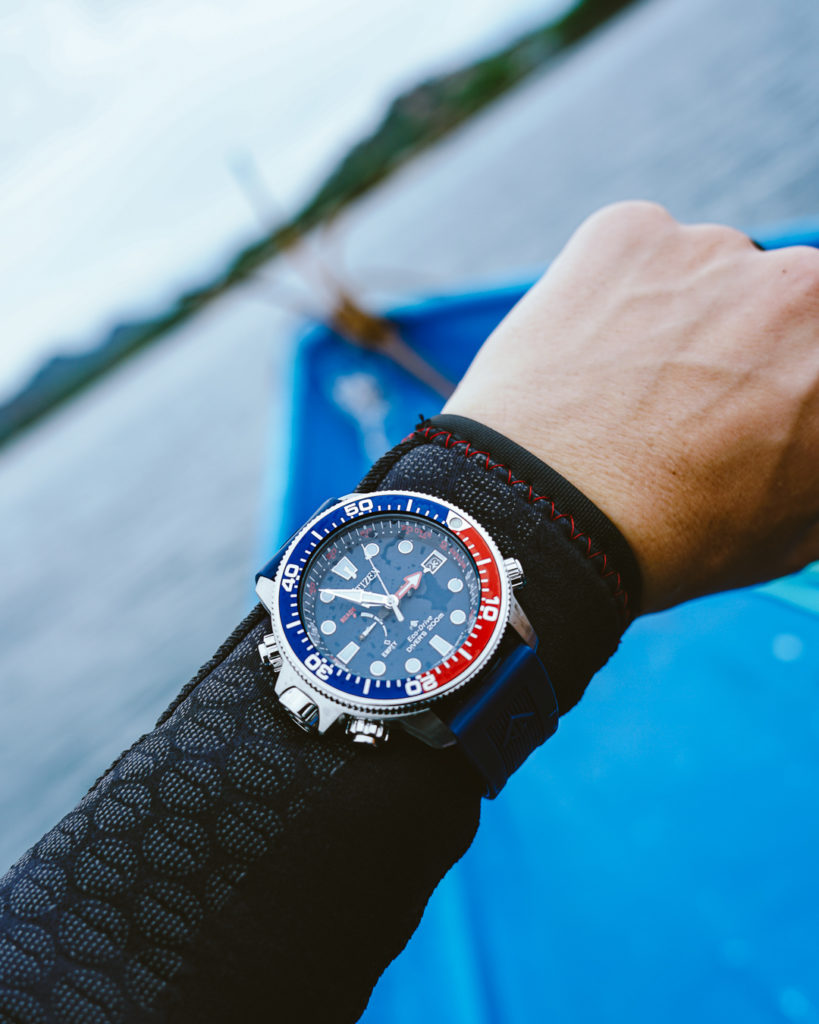 The new Citizen Promaster Aqualand (ref. BN2038) isn’t a purpose-built freediving watch, per se, but instead more of a rudimentary analog dive computer that tracks time, current depth, and a memory of maximum depth up to 70 meters, which should be more than adequate for most adventurous scuba or freedivers. Should you enterprise to go deeper, you’re probably diving with a wrist computer, as well, but don’t worry — the Promaster is water resistant to 200 meters. Tracking depth at a glance is easy: Current depth is read by the red-arrow hand, which rests in the “zero” position pointing to 3 o’clock. Now, red isn’t an entirely practical color for a crucial element in a dive watch’s handset, as red is one of the first in the spectrum to fade after descending as few as 20 feet. Luckily, the depth hand is filled with blue lume that contrasts the green luminous plots around the dial, so it remains highly legible at any depth. Tucked beneath this arrow is a white max-depth memory indicator, which remembers your most recent maximum depth, crucial for calculating safety stops or surface intervals between repeated dives. This depth can be recalled or reset ahead of your next dive using the pushers on the opposite side of the case. 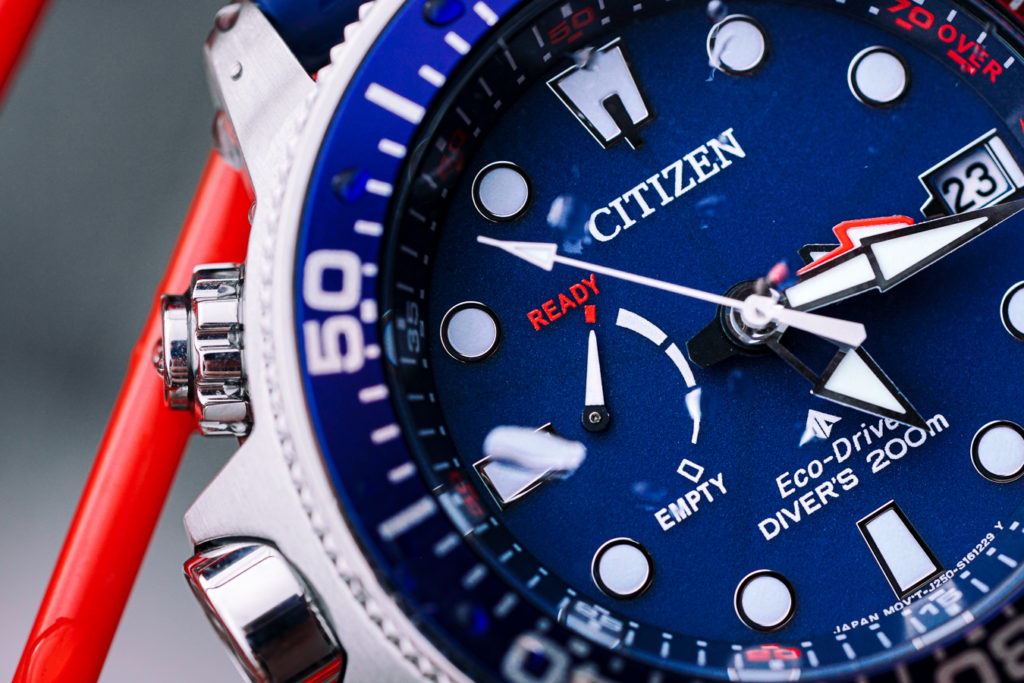 The Aqualand also houses a charge indicator (or a power reserve, to crib some mechanical-watch parlance) and a very conservative ascension alarm that beeps if you’re returning to the surface too quickly — of course not critical when freediving, as one may surface as expediently as one’s urge to exhale dictates, without injury — but it could prove vital when scuba diving where a comparable scenario could prove deadly. And just like past Aqualand models, all of these capabilities are, more or less, hidden behind a classic three-hand timekeeping visage until the watch head is immersed in water, where a small, gold-colored sensor tucked flush into the caseband at 3 o’clock activates a secondary aquatic mode and the real fun begins. 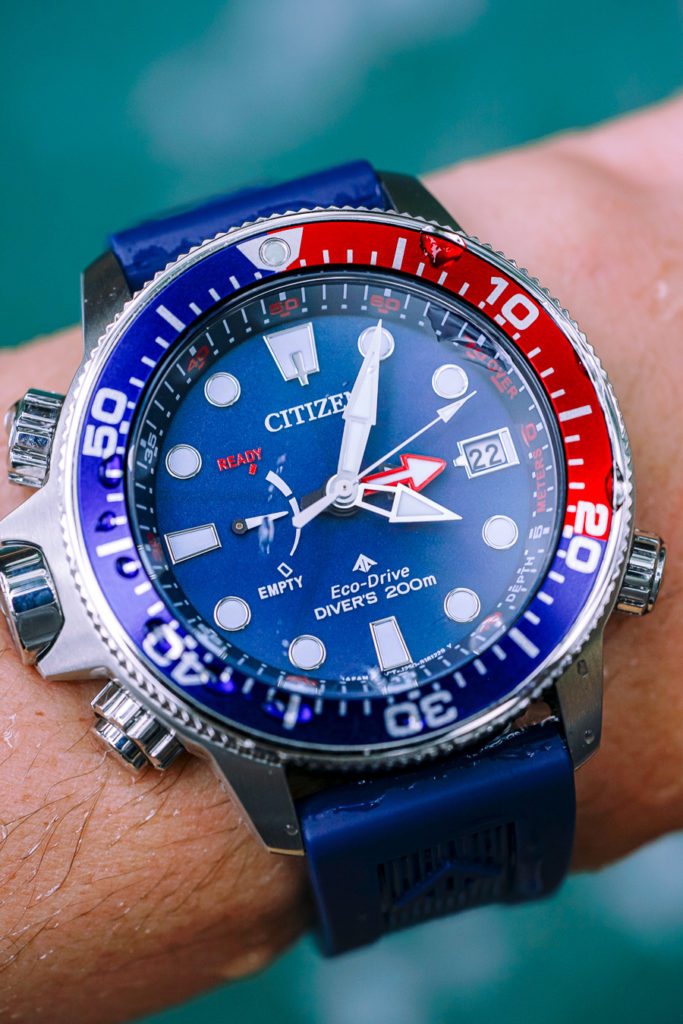 Similar to the Aqualand, the human body also contains its own hidden water-activated mode called the “mammalian diving reflex,” which collectively refers to a chain reaction of physiological responses that take place within the body when the face comes into contact with water. Individually, each of these responses is relatively benign, but together they represent something much more interesting: an evolutionary survival response that overrides the basic systems governing the body’s homeostasis, enabling it to dive deeper or longer on a single breath. In very broad strokes, think of the dive reflex as the exact opposite of the acute stress response (also called “fight or flight”), which discharges the sympathetic nervous system to essentially weaponize the body, steeling it against perceived attack with adrenaline and increased blood flow to the extremities. Conversely, the dive reflex slows everything down — particularly heart and brain activity, while shifting blood flow from the extremities to core vital organs (heart, lungs, brain), and contracting the spleen to release blood into the circulatory system, thereby increasing available oxygen, before all of those oxygen stores are re-routed to the heart and brain — all of this is initiated the instant I draw my last breath, release my snorkel and duck my face beneath the surface of the churning sea. 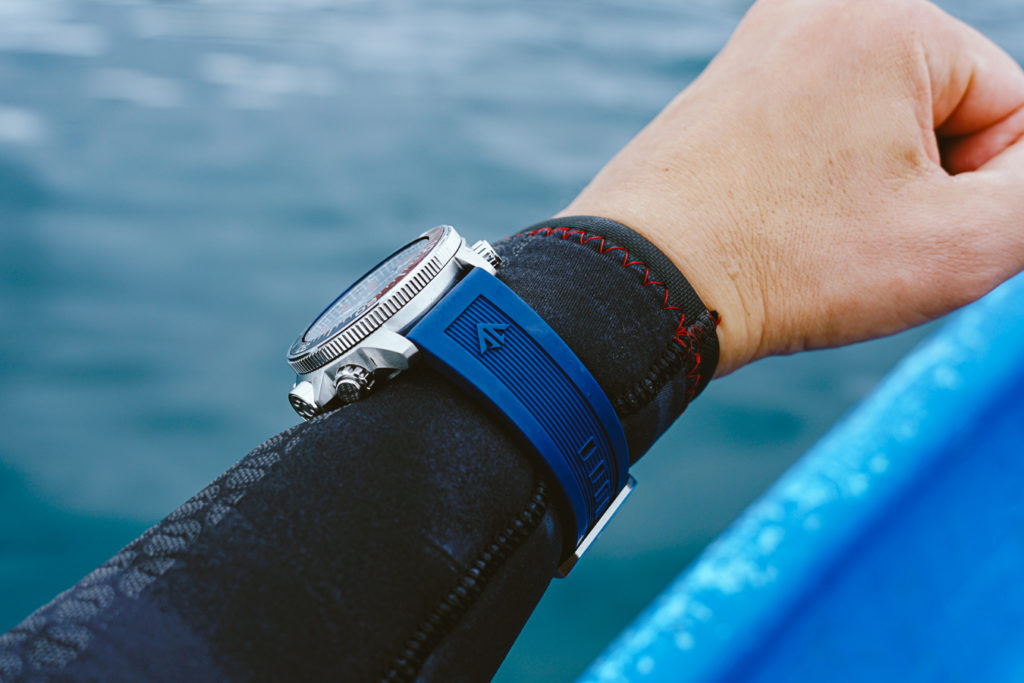 Cast in stainless steel, the BN2038 isn’t the first Aqualand with Citizen’s Eco Drive caliber J250 execution (a solar-charged, quartz-powered movement with the aforementioned dive complications), but it’s extremely important to note that this edition has been mercilessly reduced in size from the similarly equipped 53mm monster that is the Promaster Aqualand BN2029 to a far more manageable 46mm. Granted, it does lose the sapphire crystal, DLC-coated bezel, and some of the more premium finishing of the BN2029, but I’d consider it a fair tradeoff to have a watch that’s markedly more comfortable to wear. 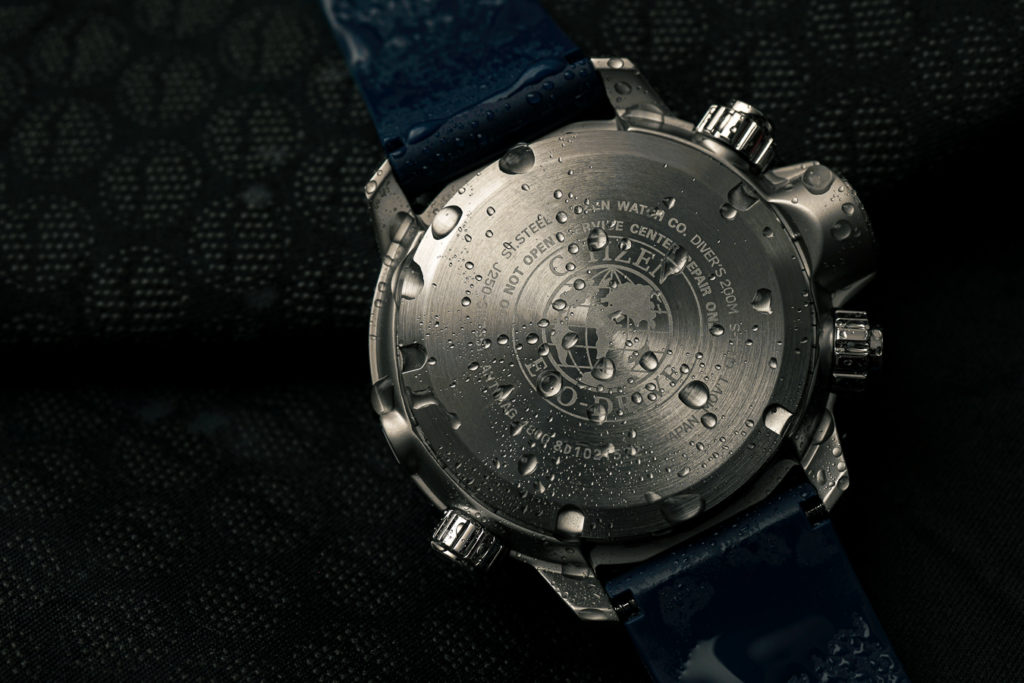 Plus, bear in mind that most of the visual footprint of the Aqualand belongs to the water-pressure sensor at 9 o’clock, and the pushers at 8 and 10, which recall or reset the maximum depth indicator, respectively. Also much more manageable in the new edition are the 22mm lugs, a 16.5mm case height, and a perfectly wearable 52mm lug-to-lug length, the combination of which makes it a comfortable daily wear in addition to being an abundantly capable dive tool. But while these conservative dimensions suggest a broader purpose and appeal than past Aqualand models, they don’t betray the original purpose-built, instrument roots of the Aqualand itself.