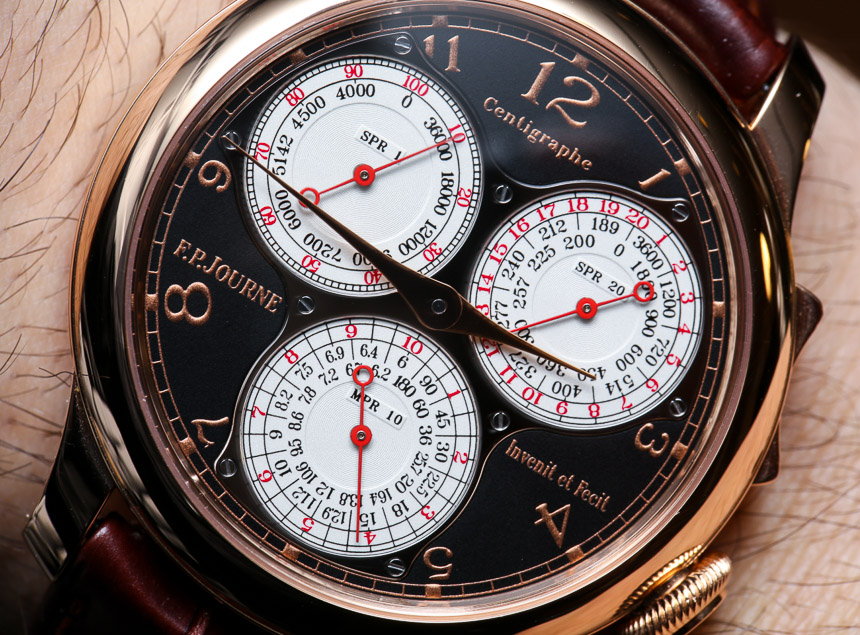 I neither understood or appreciated the F.P. Journe Centigraphe Souveraine (which they also sometimes spell as “Souverain”) watch when it first came about in about 2007. I was still relatively new to the world of ultra high-end watches, and lacked an ability to appreciate the weird from the truly wonderful. Years later, as my tastes and knowledge have matured, I can look back at items such as the inventive Centigraphe and have a much better sense of enjoyment for what Mr. Journe developed as his own take on the traditional chronograph.

While “chronograph” means “time writer,” “centigraphe” means “100 writer.” That is because the Centigraphe is a chronograph that measures down to 1/100th of a second, and at the time in 2007 that was a big deal for a mechanical watch. Since then, TAG Heuer and other brands have matched or bested that with interesting systems, but I think that for daily wear, it is hard to beat the Centigraphe. One of the reasons is the way it works. F.P. Journe didn’t develop a high-beat balance wheel system to get that level of accuracy. In fact the Centigraphe operates not at 4, but at 3Hz. So how does it measure down to 1/100th of a second? 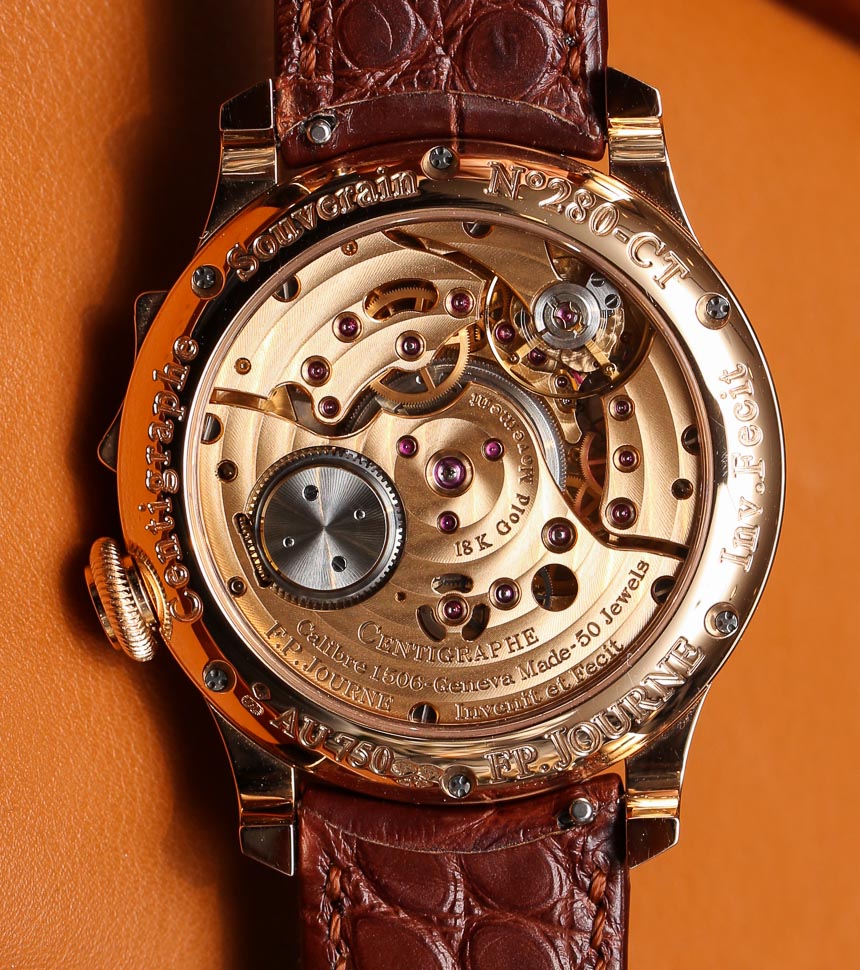 Let’s put that into context. The TAG Heuer Mikograph (hands-on here) contains two balance wheels. One is for the time and operates normally, but the one for the chronograph operates as an intense 360,000 bph. That is compared to the 21,600 bph in the Centigraphe. So how is it that F.P. Journe is able to achieve this level of precision without more beats per second? The answer is really about clever gearing and a patented system that connects the chronograph directly to the escapement.

In fact, one of the major benefits of the Centigraphe is that the chronograph system is separated from the system that tells the time. This is the same concept as the Jaeger-LeCoultre Duometre that splits the movement between time-telling and other complications. The idea is to reduce the burden on the movement so as not to effect amplitude in a way that will reduce timing accuracy. To put it plainly, if the chronograph is activated it draws power from the mainspring more or less directly and does not dilute the flow of power to the mechanism in charge of telling the time. To do so would interrupt the amplitude of the movement thereby altering the accuracy of the movement. 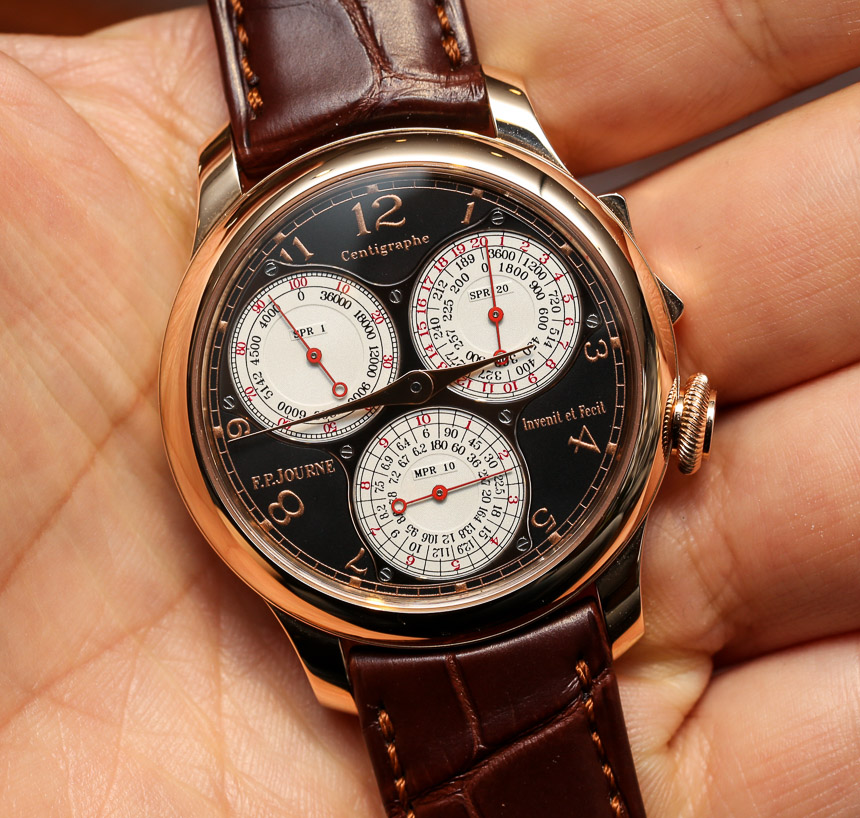 Speaking of the movement, it is the in-house made F.P. Journe Caliber 1506. Built on a solid gold movement plate it is hand-assembled and has 80 hours of power reserve without the chronograph running, and 24 hours of power reserve with it running. The chronograph is also unique because rather than having two pushers to start/stop and reset the chronograph, it has a unique rocker switch. The differences between the Centigraphe and traditional chronograph watches do not stop there. The real indicator that something is different in this watch is on the dial.

F.P. Journe offers the Centigraphe in a few case and dial colors. Here you have a particularly handsome version with a black dial and white subdials. If you look closely, you’ll realize that the chronograph subdials are placed on a single white gold plate that sits over the base dial. The three subdials are each used for the chronograph and it measures up to 10 minutes in total. Each of the subdials includes both information for reading the elapsed time (in red) as well as for the tachymeter scale (that allows you to measure objects traveling up to 36,000 kilometers per hour). 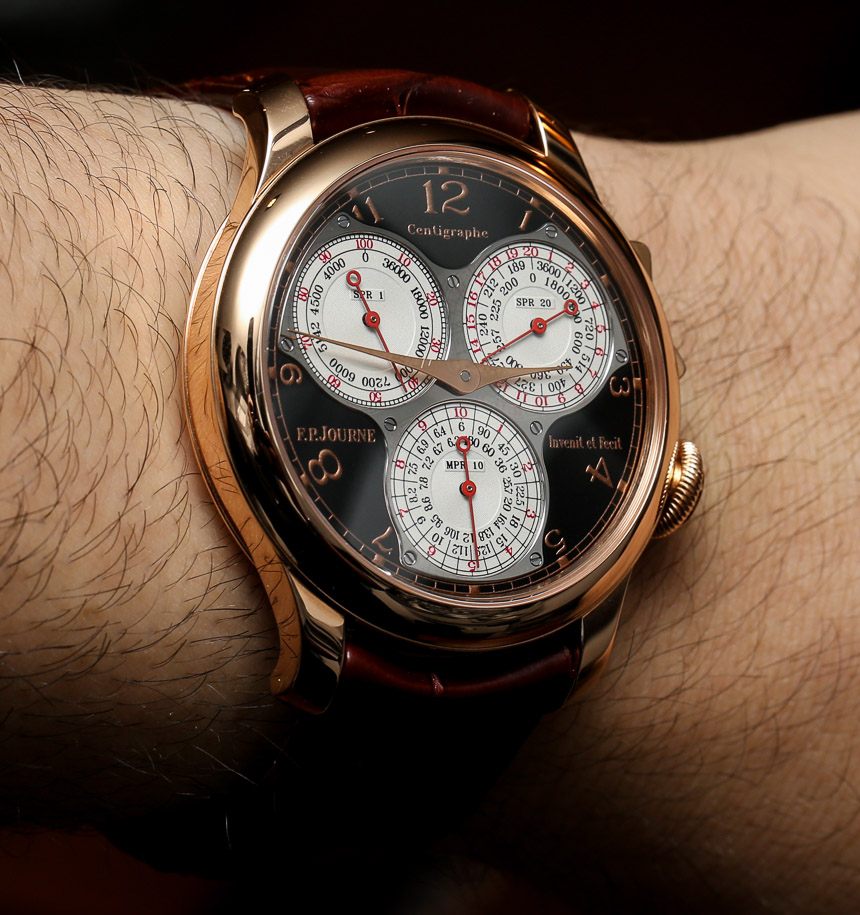