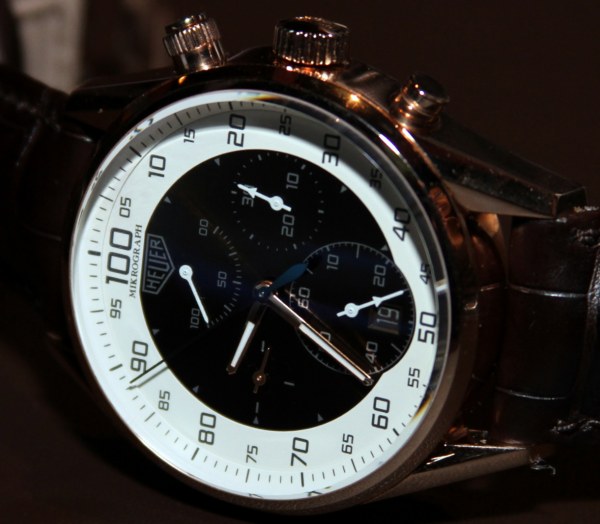 Tag Heuer was nice enough to share the new Carerra Mikograph 1/100th of a second chronograph watch with me, but the room we were in was too dark to take video! So forgive me for having just the CG movie to show you what the watch looks like while the chrono is working. Though the Mikograph is much faster than a foudroyante watch, if you know what those look like to operate you get the basic idea.

I first wrote about the Tag Heuer Carrera Mikrograph here. What does it mean in the video that the watch parts of this modern timepiece come right out of an older Mercedes sports car? The effect is cool, but the logic leaves me scratching my head a bit. Where do I put in the fuel? Modern the movement is. Don’t let the vintage looks of the Carrera case deceive you, Tag Heuer wanted you to understand this is part of their new range of in-house, hand-made very high performing movements when you look at it through the caseback. I think the reason they went with the classic look of the case and dial was as an homage to vintage Heuer stop watches. Ont the dial the logo is just “Heuer,” signifying that this was is clearly a throwback design model.

The movement is the most interesting part of the watch (and the reason for its very high price-tag). It is based on a previous Tag Heuer movement called the Calibre 360 – which is clearly the parent of this Mikrograph movement. The 360 also had a chronograph that could measure 1/100th of a second, but the 1/100th hand was a subsidiary hand versus a centrally mounted one. The claim to fame here is the world’s first “1/100th of a second mechanical chronograph with a centrally mounted 1/100 of a second chronograph hand.” The 360 also didn’t have a movement that was integrated – we’ll get to that in a sec. The Mikrograph calibre is done in a polished almost gun-metal finish, and automatic movement has at least two barrels, and two escapements. It is actually more like two movements in one – but the design is integrated so that it looks like one movement. On the one hand you have the movement for the time and date. It has a standard escapement running at 28,800bph with 42 hours of power reserve. Then you have the movement just for the chronograph. Its escapement operates as a blazing 360,000bph – wow! Both of the escapements are visible through the caseback and are neat to see in action. The chronograph has its own mainspring barrel – which lasts just 90 minutes. There is a 0-100 scale on the watch dial under 12 o’clock. This is a power reserve indicator for the chronograph measured by movement power reserve fullness percentage. The movement is also COSC Chronometer certified. 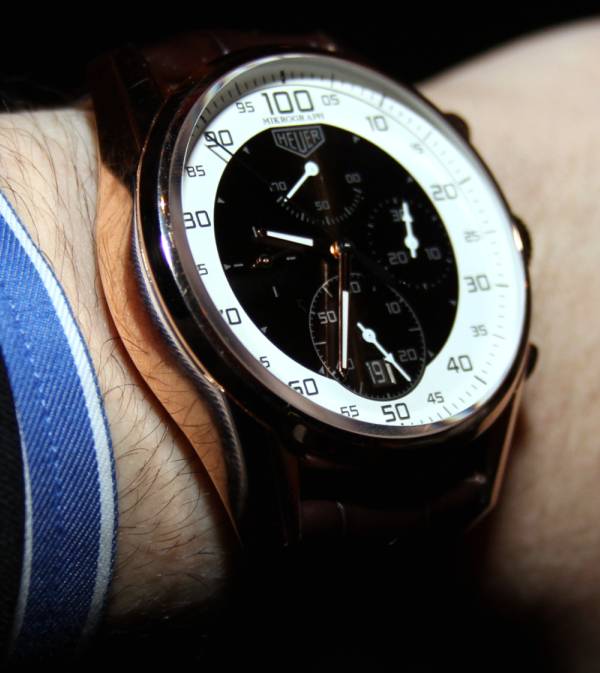 Where the movement gets a bit quirky is with the winding system. While the time movement is automatically wound by the rotor, the chronograph movement must be hand-wound. I guess it just requires a lot more torque. Reading the dial is pretty simple, and even with all the numbers it does not feel cluttered.

While I didn’t get to video the Mikrograph watch in action, I did get to operate it myself. The system is pretty refined meaning that it doesn’t make weird buzzing noises or feel like a windup toy vibrating in your hand. The blue chronograph 1/100th of a second hand moves around the dial once each second in a pretty constant motion – so it moves pretty fast. You then have the 60 second counter at 6 o’clock and the minute (up to 30) counter at 3 o’clock. 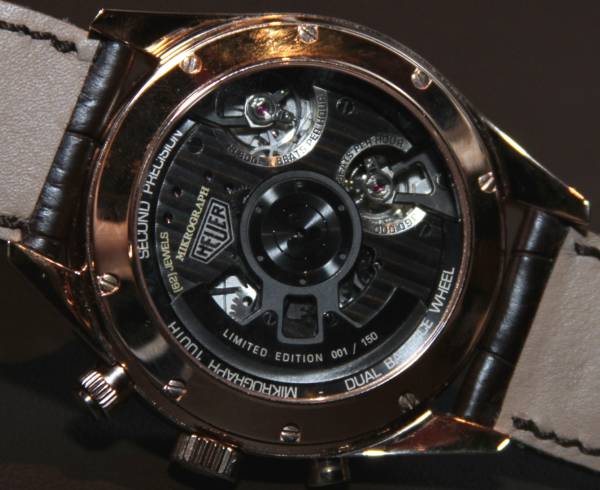 The blued chronograph hand is hard to see in a lot of light, but it does add some color to the dial. There are a lot of mixed feelings on the watch dial. Some people love it, and others wish that Tag Heuer spruced it up a bit more. I tend to fall into the latter camp because I feel that the dial – while attractive – feels too flat for my tastes. Aside from the hands, the entire dial is flat. At this price range and from Tag Heuer watches, I would have expected maybe some applied markers and/or some leveling on the dial.

The case is 43mm wide and in standard Carrera style. It is also in 18k rose gold, and looks handsome with the cream and brown dial, matched to the brown crocodile strap. The sapphire crystal is raised up a bit with a beveled edge. This helps it feel more retro, but this combined with the doming of the crystal can create distortion when looking at the dial from angle. 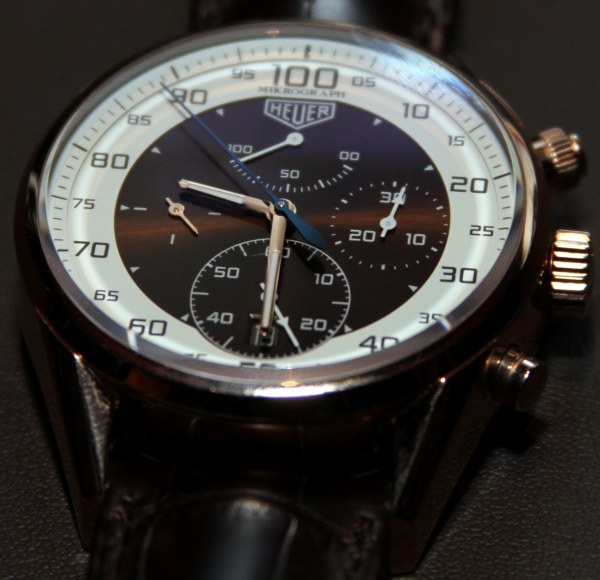 An un-apologetically vintage style design with a very modern movement makes for a watch that is a few things to a few people. It makes me wonder if Tag Heuer is marketing to multiple groups with this watch. The gold case and style will appeal to fashion types wanting something “special” from the racing watch brand. The movement on the other hands will appeal to gear-head watch collectors who appreciate the high performance chronograph. I think it is interesting how Tag Heuer created something for both of these audiences. Price wise the Carrera Mikrograph is hard to stomach and reaches  the”if you have to ask you cant afford” territory of $50,000. It does have a hand-made movement, 18k rose gold case, and is part of a limited edition of just 150 pieces – but still feels expensive for a Tag Heuer even though it is not the brands most expensive watch at all.