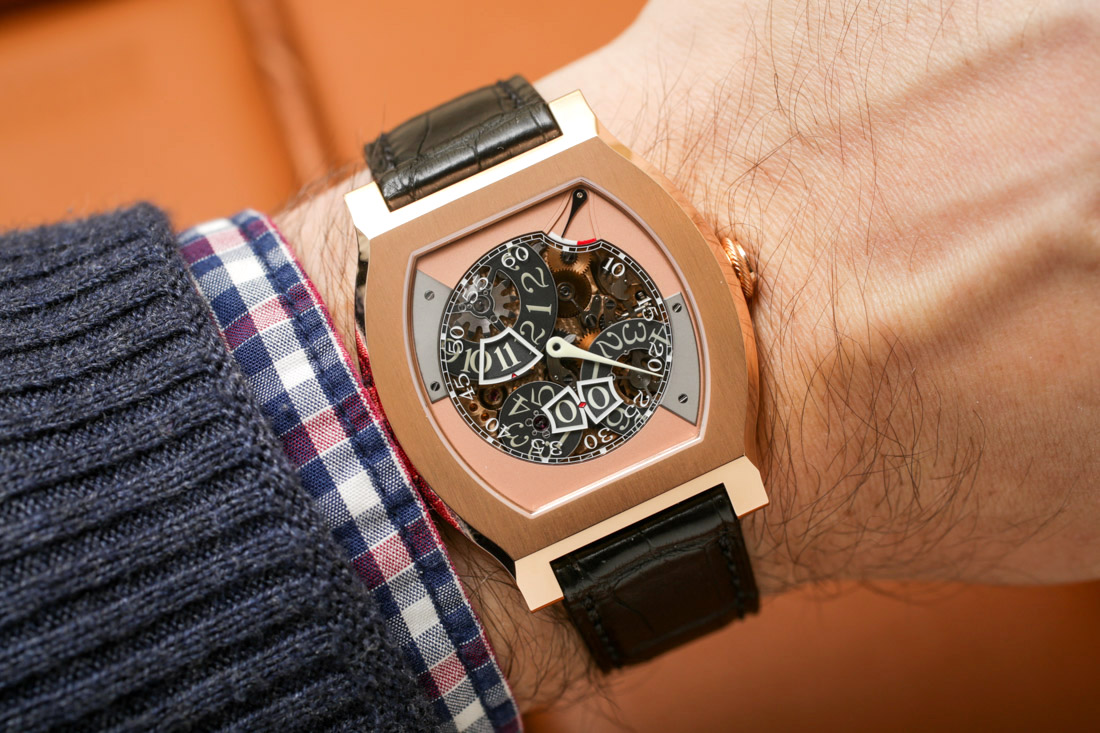 January 2017 brought us the third and, sadly, final chapter of one of the coolest, yet least-known haute horlogerie collections from F.P. Journe. Enter the F.P. Journe Vagabondage III, a quietly debuted and most likely quick-to-sell-out exercise in horological muscle-flexing by François-Paul Journe. 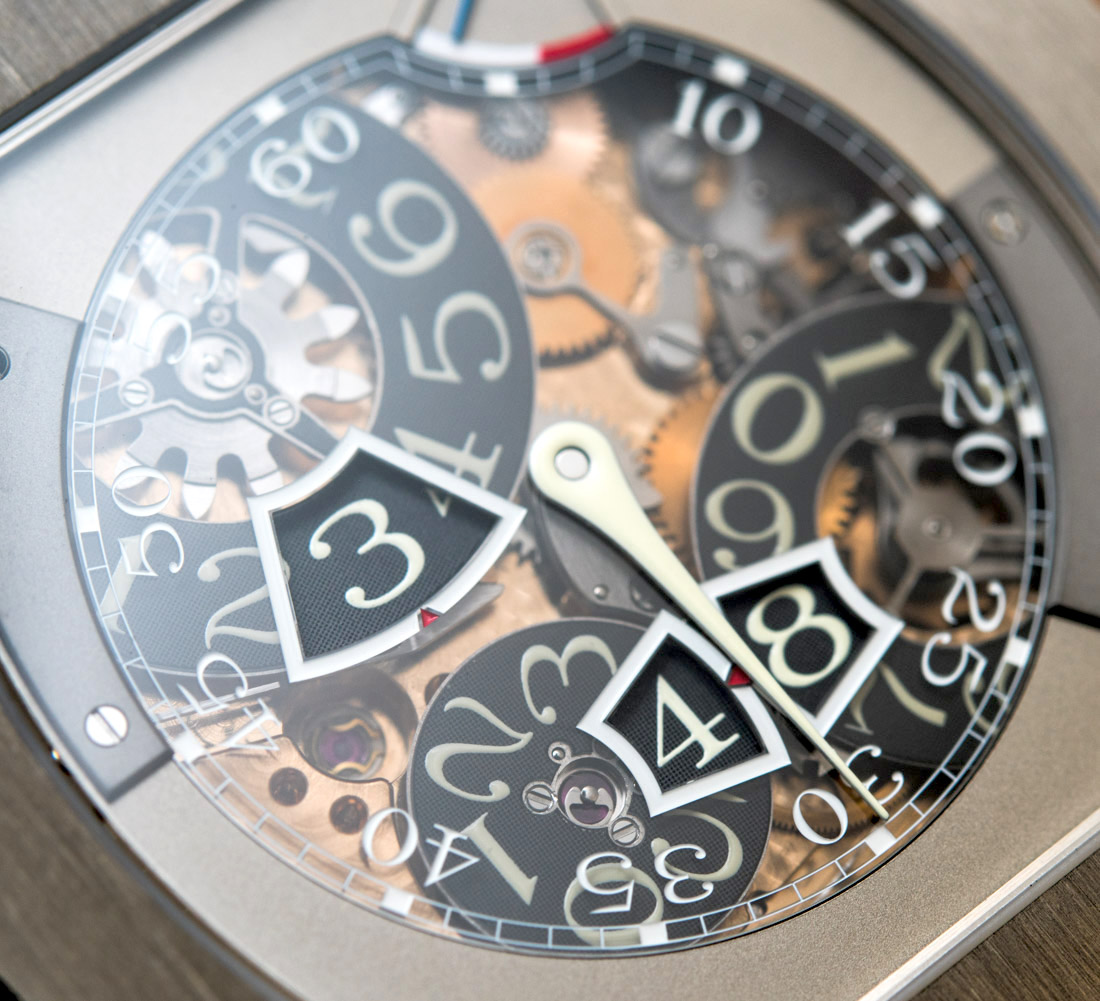 At a time when one would have every reason to believe that everything worth doing in high-end watchmaking has already been done, there remain a few niche, but no less cool challenges that allow the more gifted and motivated of the brands and watchmakers to shine through. Watches we see get extremely complex time after time, as they chime the time in two separate time zones, put tourbillons inside double-tourbillons, or measure impossibly short periods of time. 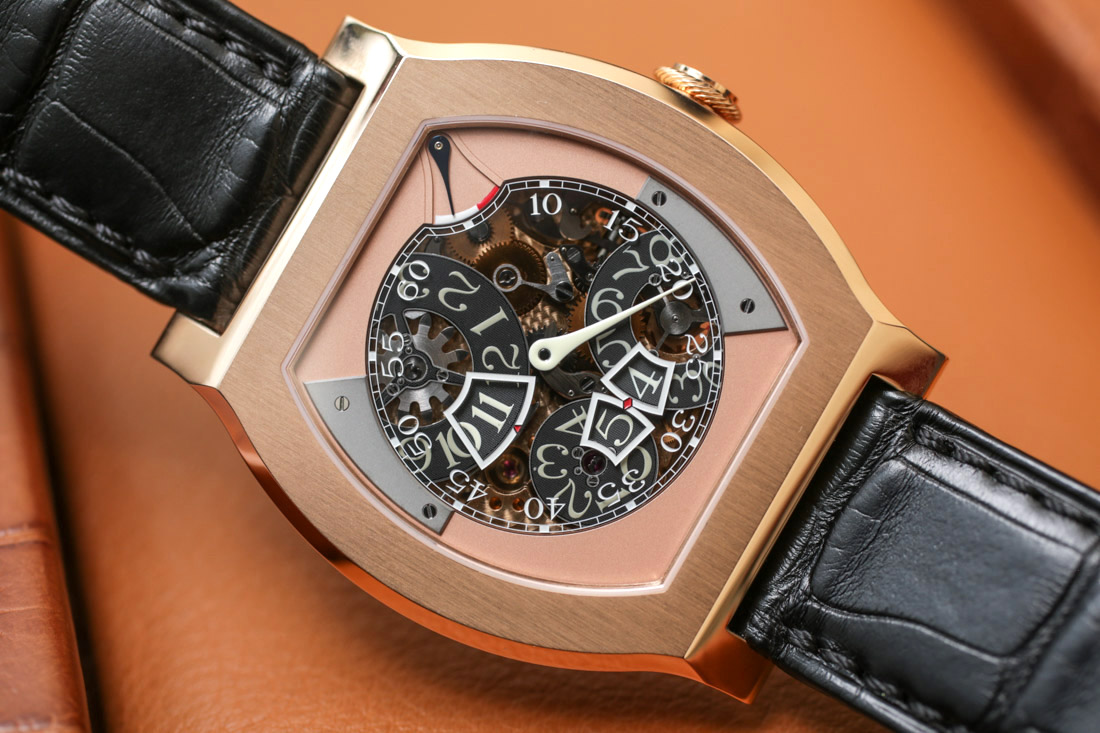 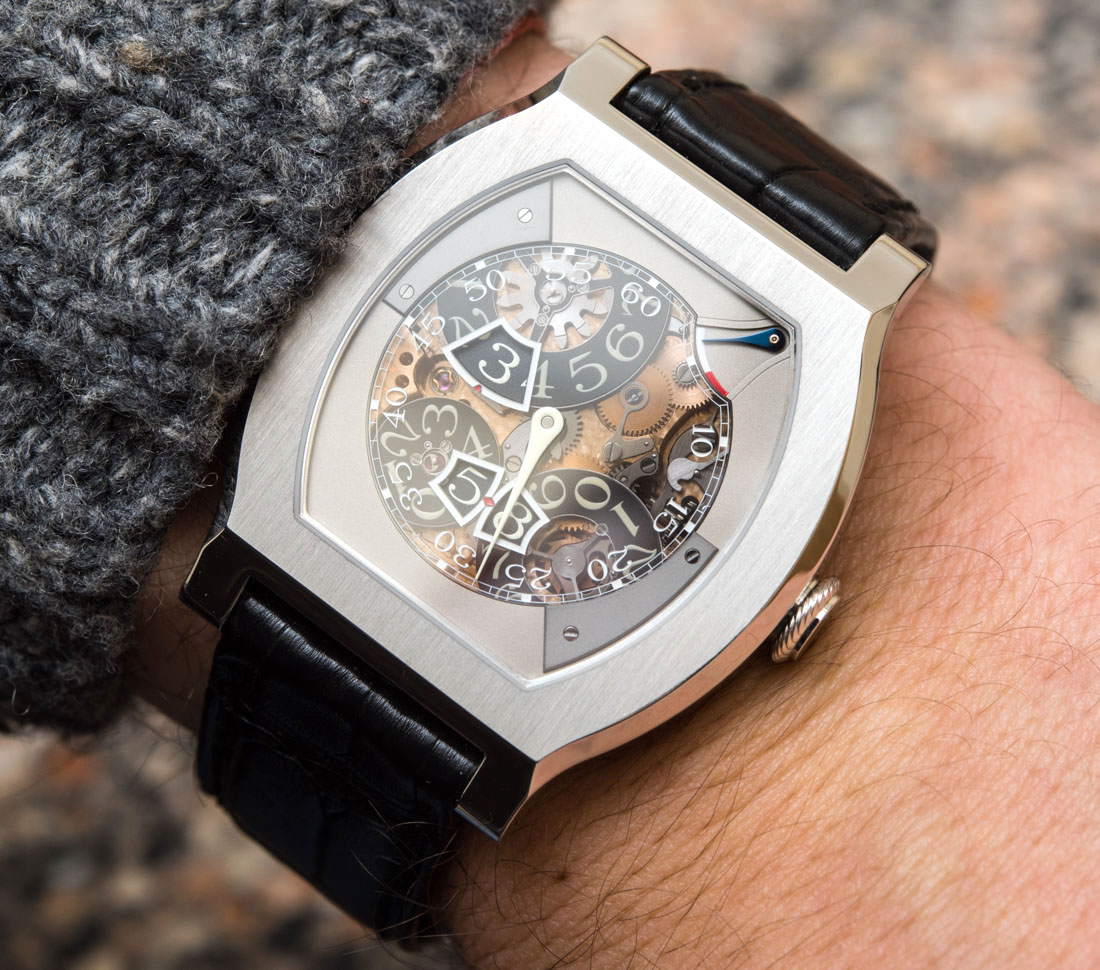 However, a common issue among them all, and also a problem that to this day renders many novel ideas impossible to implement in mechanical watches is the very limited torque that a small, compressed spring, or even a set of springs, can supply. Jumping indications are notoriously problematic because every time they work they require comparatively high amounts of energy to move the discs or hands by one relatively large increment.

To overcome this issue, F.P. Journe has linked what is the first ever “mechanical digital jumping seconds display” to the “remontoir d’égalité,” a clever constant force device that he has mastered in many of his previous creations. A remontoir was originally designed to gather energy through a given period of time (it could be set anywhere from between seconds to several minutes) and release that gathered energy after said period had expired. This was to give an extra “nudge” to one or more functions/indications in the movement that require, first, a lot of energy to operate and, second, would otherwise sap too much of it from the mainspring which, in turn, wouldn’t be able to deliver enough to maintain accurate timekeeping. 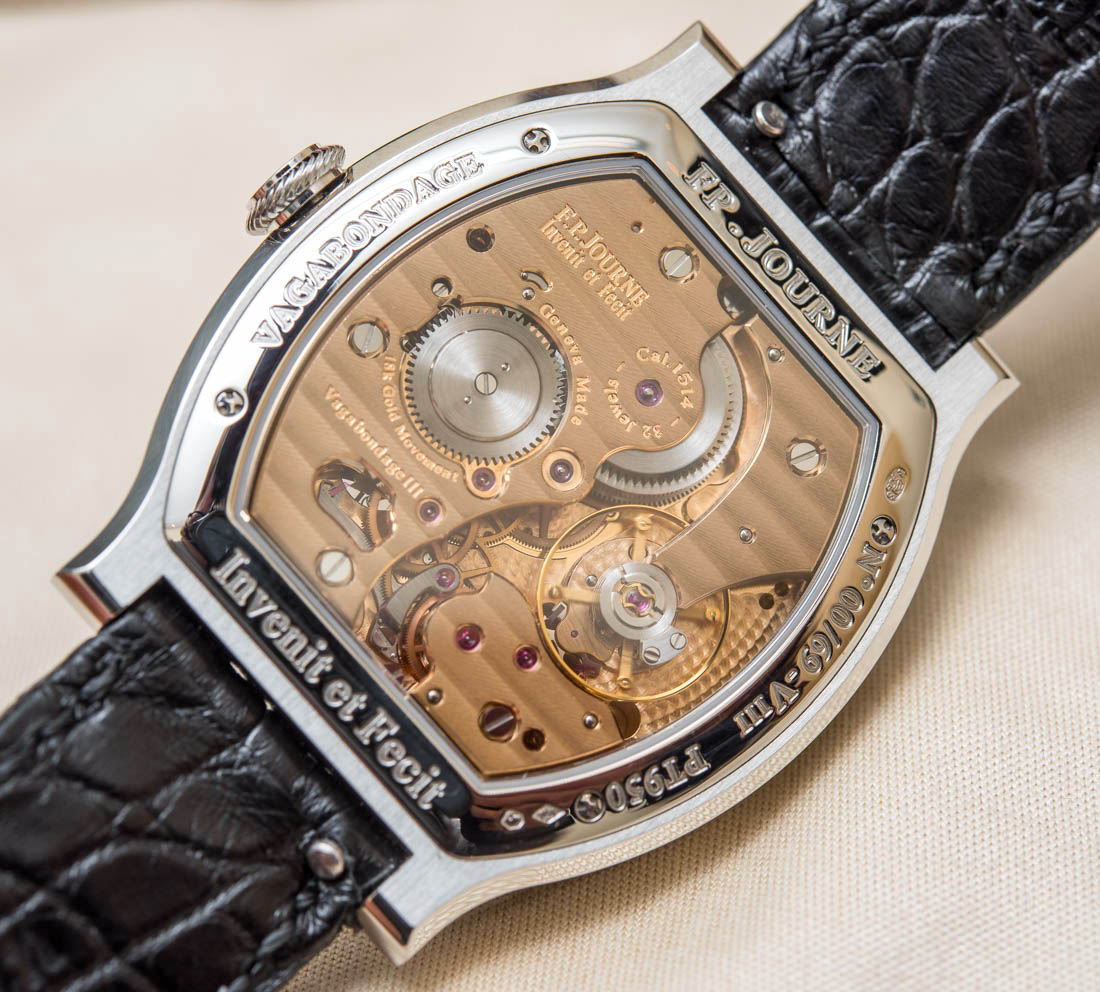 It comes as no surprise, then, that the remontoir in the F.P. Journe Vagabondage III fires off – or, more accurately, advances the time train – each second. The resulting movement comprises 249 parts and 32 jewels, and still measures a mere 29.3mm by 28.2mm and just 5.88mm thick, runing at 3Hz with a power reserve of 40 hours. You see, the hand-wound movement falls dearly short of two full days but that is the compromise one has to make in favor of having such a novel feature – much like how leaving the screen always on would drain a smartphone’s battery faster, basic physics apply just the same. 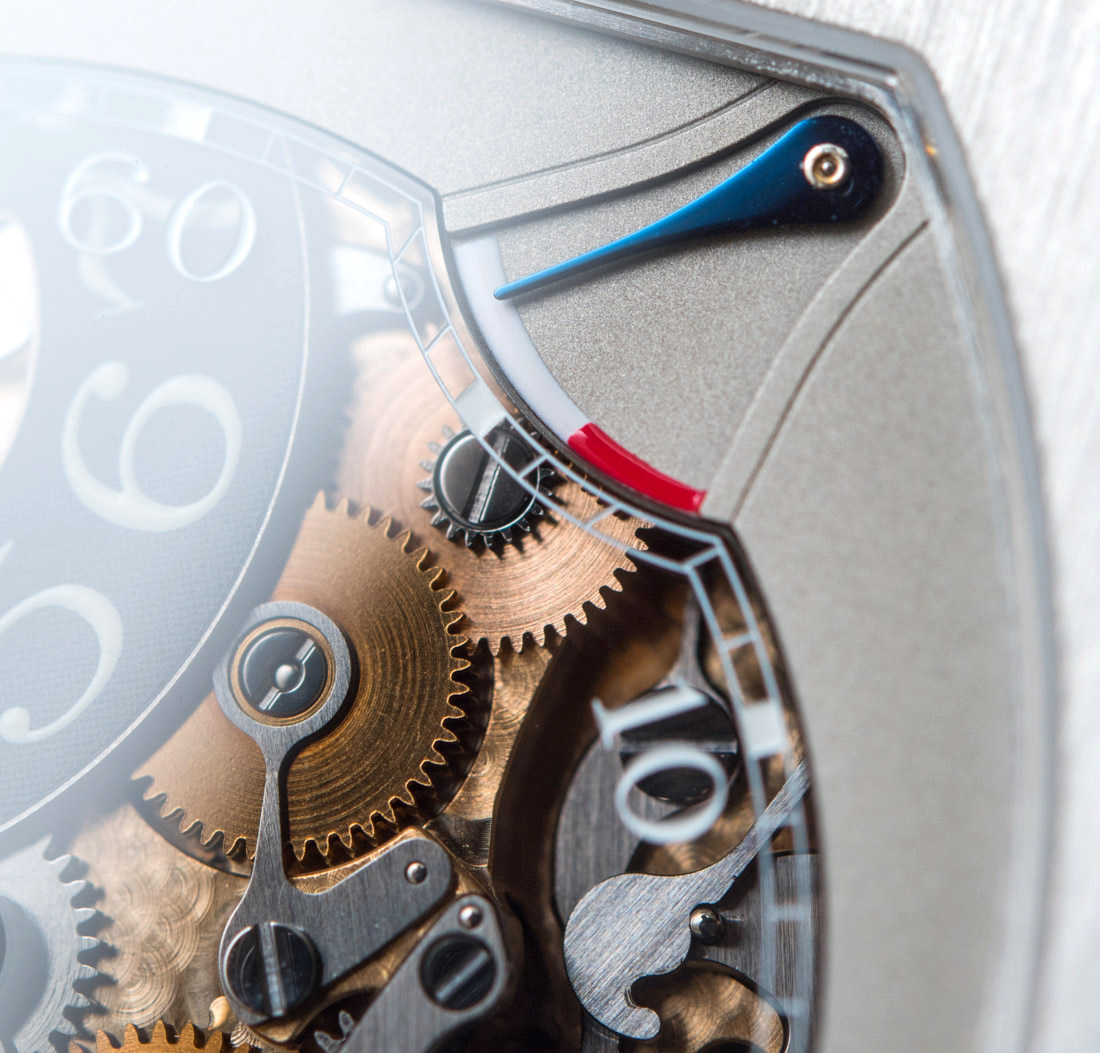 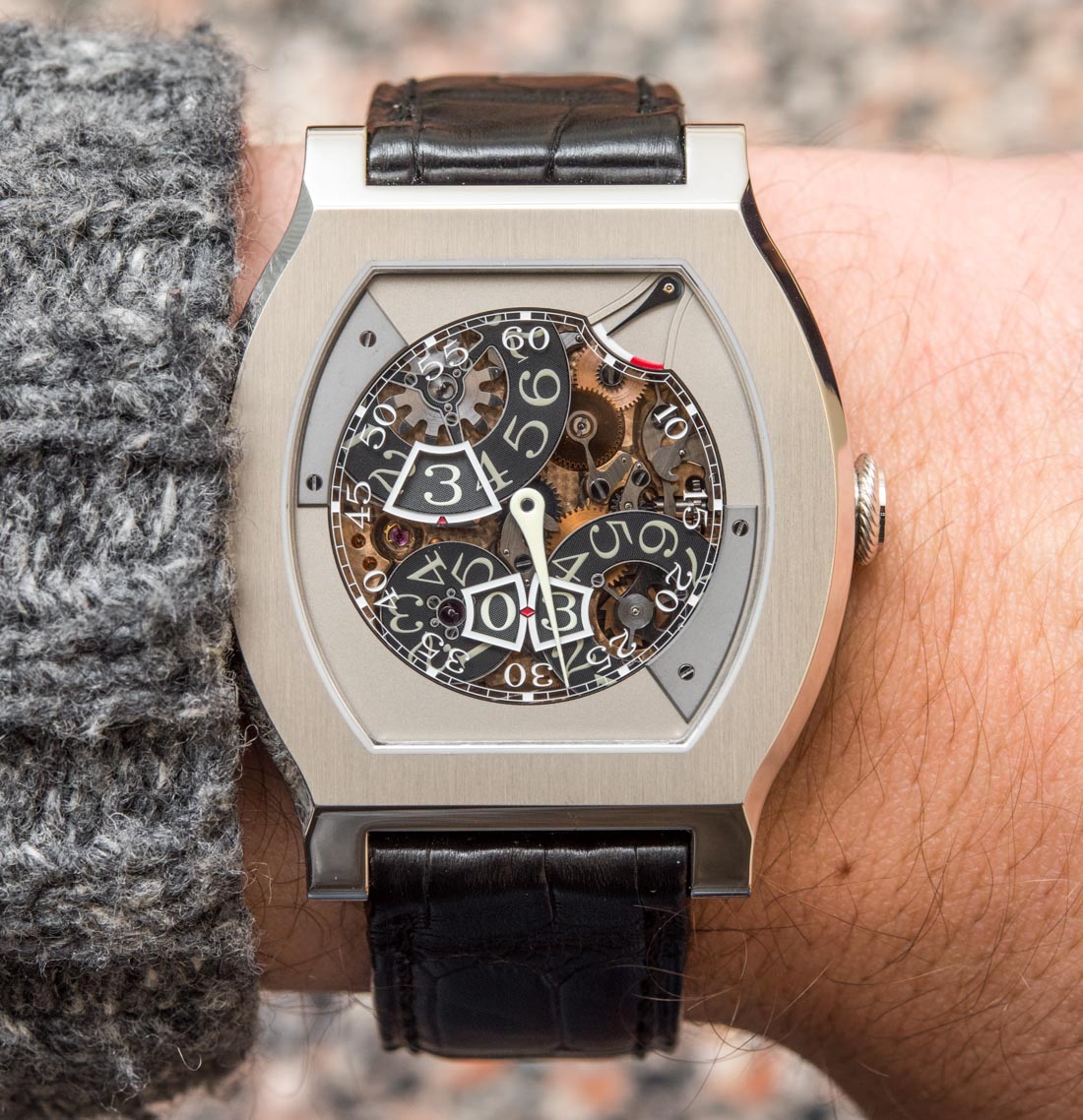 The F.P. Journe Vagabondage III case, 69 times available in 950 platinum and 68 times in 18k red gold, measures 45.2mm tall and 37.6mm wide, and is just 7.84mm thick. The “tortue” (tortoise) case remains full of character as it manages to maintain the same size as that of the Vagabondage II. Even with its sort of cut-off, flat bezel and simply curved sides, there is something unapologetically elegant and masculine to this no-fuss design. The crown is small, but recharging the 40-hour power reserve is no hassle thanks to the beautifully smooth winding feel (an F.P. Journe specialty, at this point), and you’ll even know when to do it thanks to the power reserve indicator set into the 1 o’clock position of the dial. 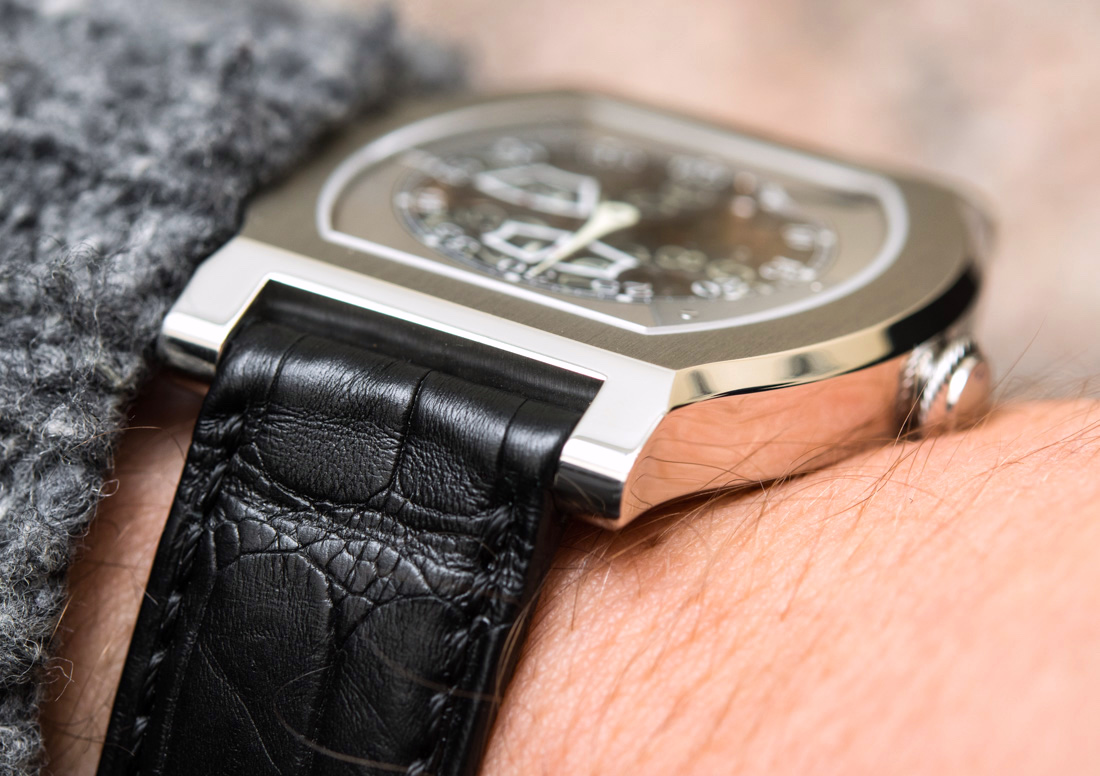 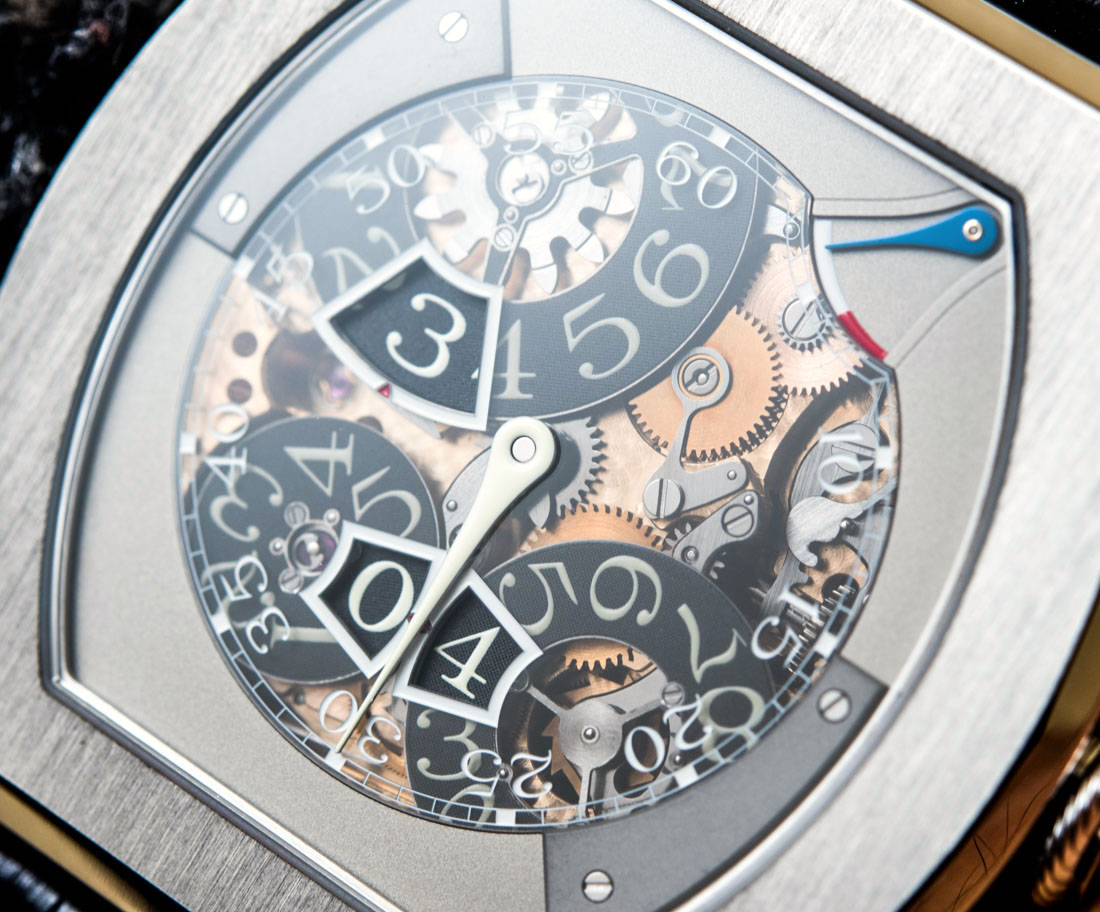 Reading the time will likely take some getting used to, as – speaking for myself, at least – my eyes were always drawn to the large Arabic numerals first, with my attention then quickly held hostage by the amazing jumping seconds display. Only after a while could I start looking for the means of reading the minutes which, unlike with the Vagabondage II, is not indicated by a jumping display but rather a large and, again, typically Journe hand. 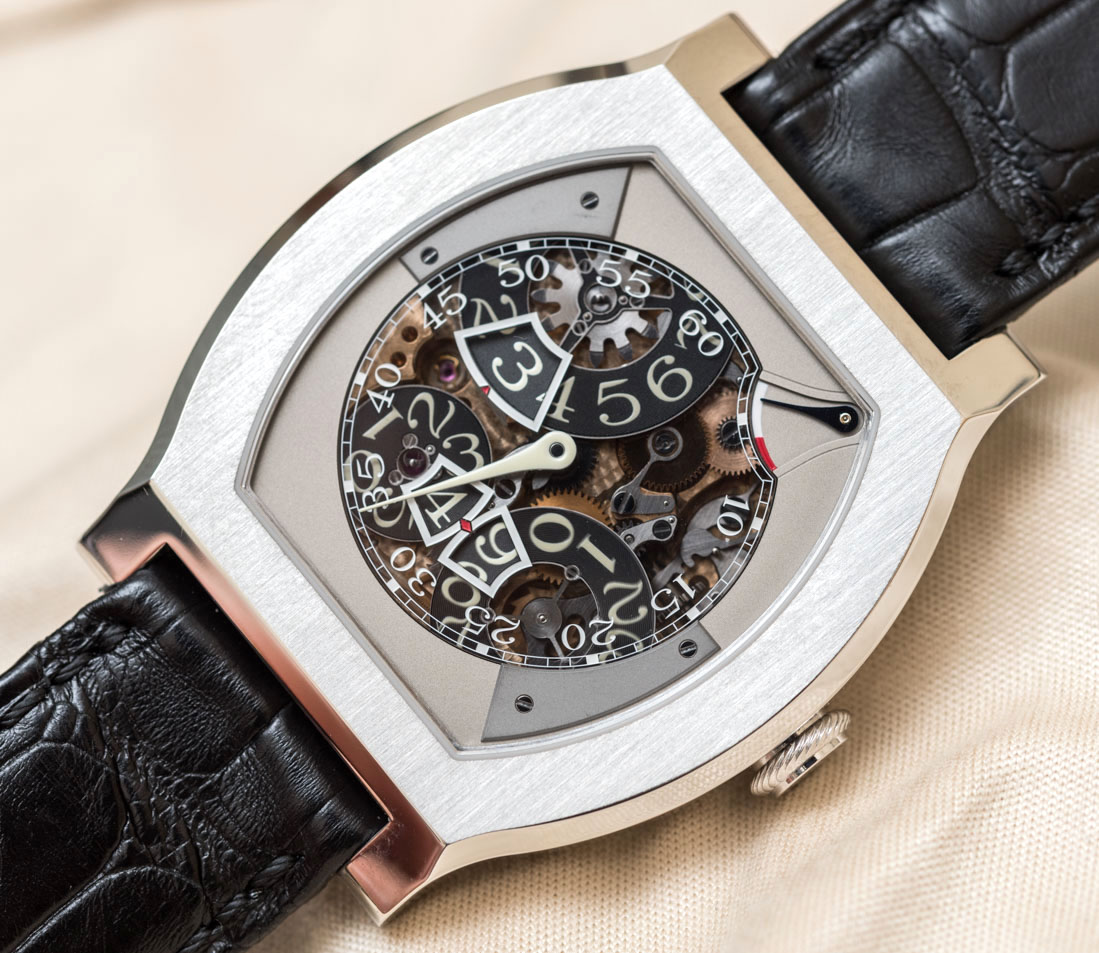 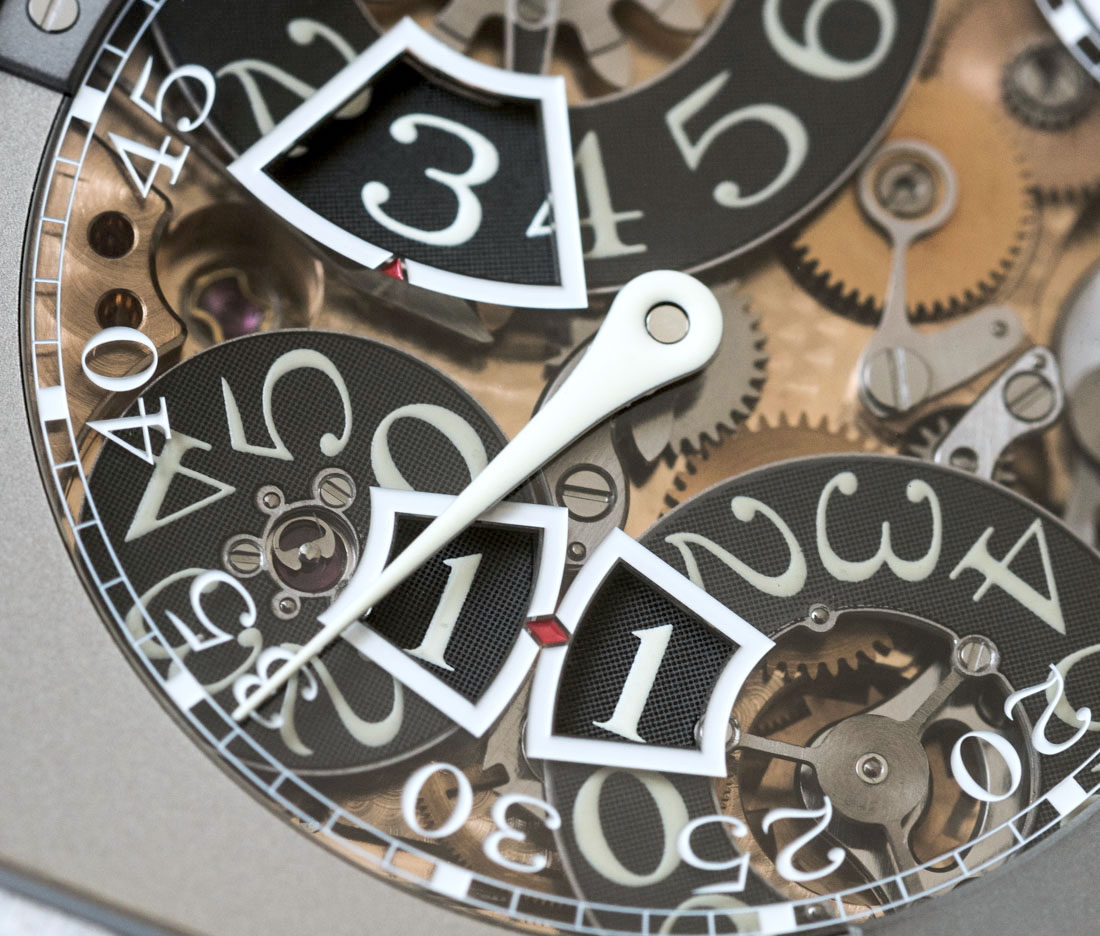 There is no doubt that the F.P. Journe Vagabondage III’s legibility could have been drastically improved by making the whole dial solid or at least coated to very dark gray, but that clearly isn’t what I believe the majority of Vagabondage (and Journe-) collectors would have preferred. There is something irresistibly cool about seeing the wheels turn, to see the upcoming numeral ready to be swapped into its white frame for a passing moment… and before you know it, it’s time for both discs to jump, which is just a main stage attraction at any horological nerd fest. 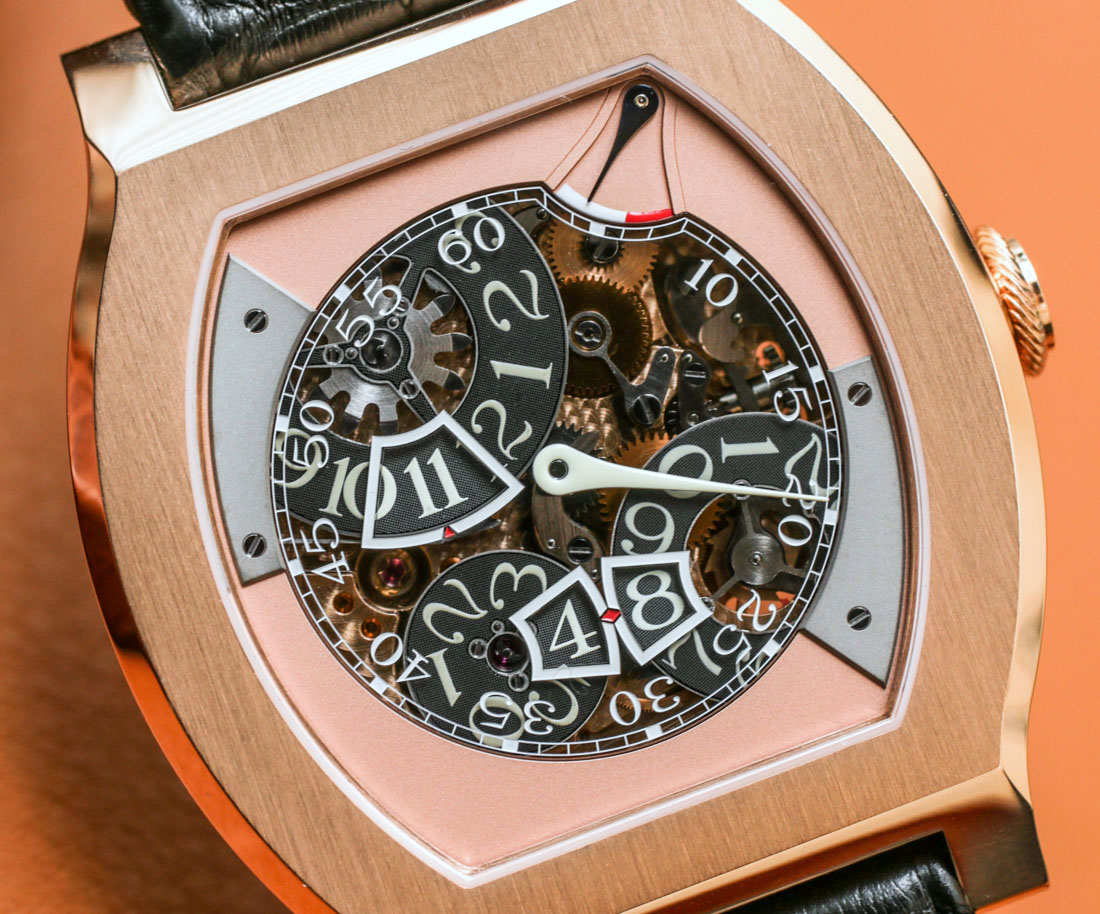 Notably, the jumping seconds display isn’t perfect. Even without a high-speed camera, one can tell with their bare eyes that the advancement of the discs happens with a bit of tolerance in timing – which I think is a great part of its mechanical charm. If something is mechanically inferior or lazily designed, we try to always notice and without exception call said faults out – but here, this really isn’t a case of a poor design. As the 3Hz movement ticks away, the remontoir charges itself and releases its energy once every second, but it happens with a sort of mechanical imperfection as opposed to the dead-boring ticking of quartz. 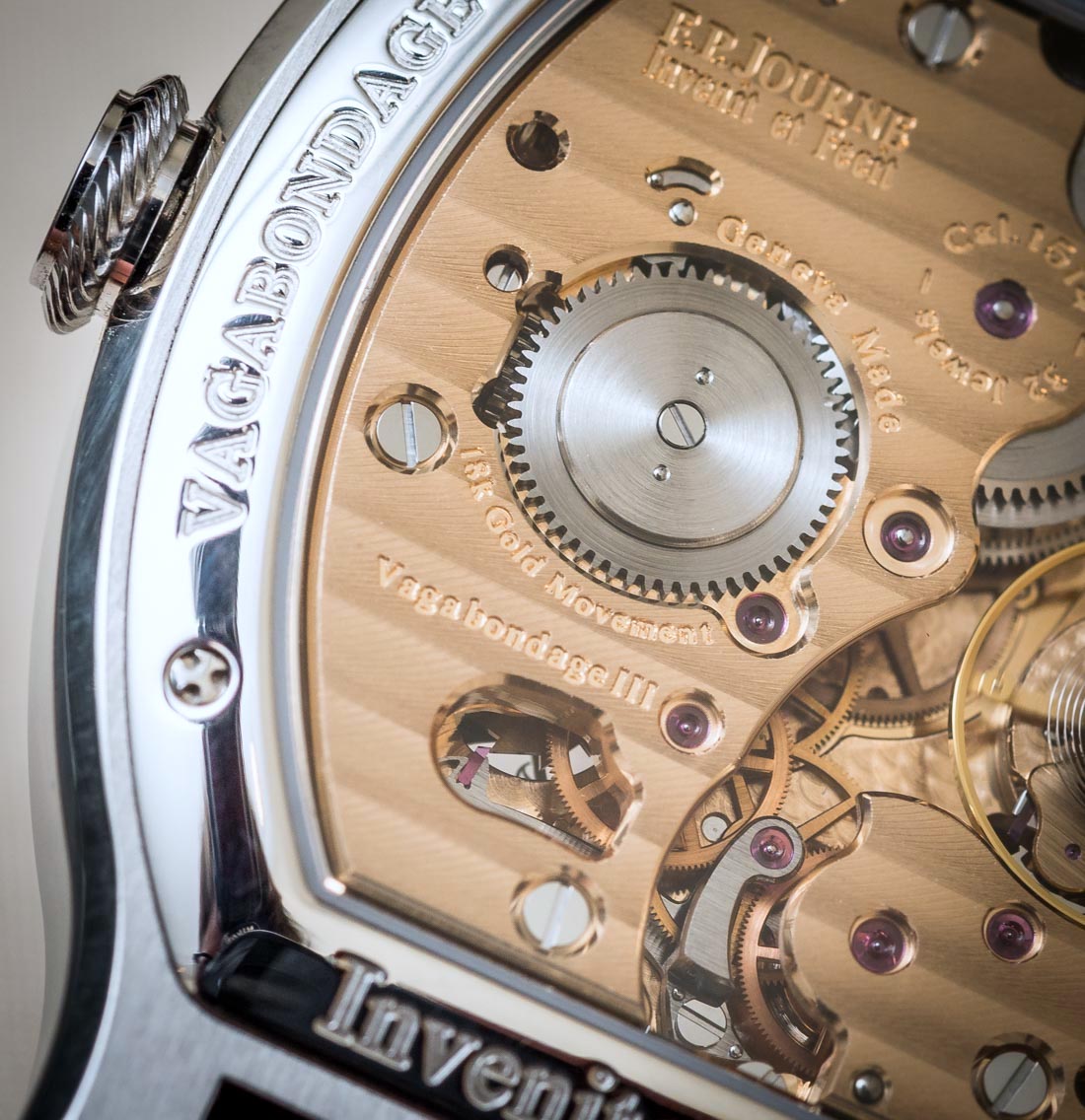 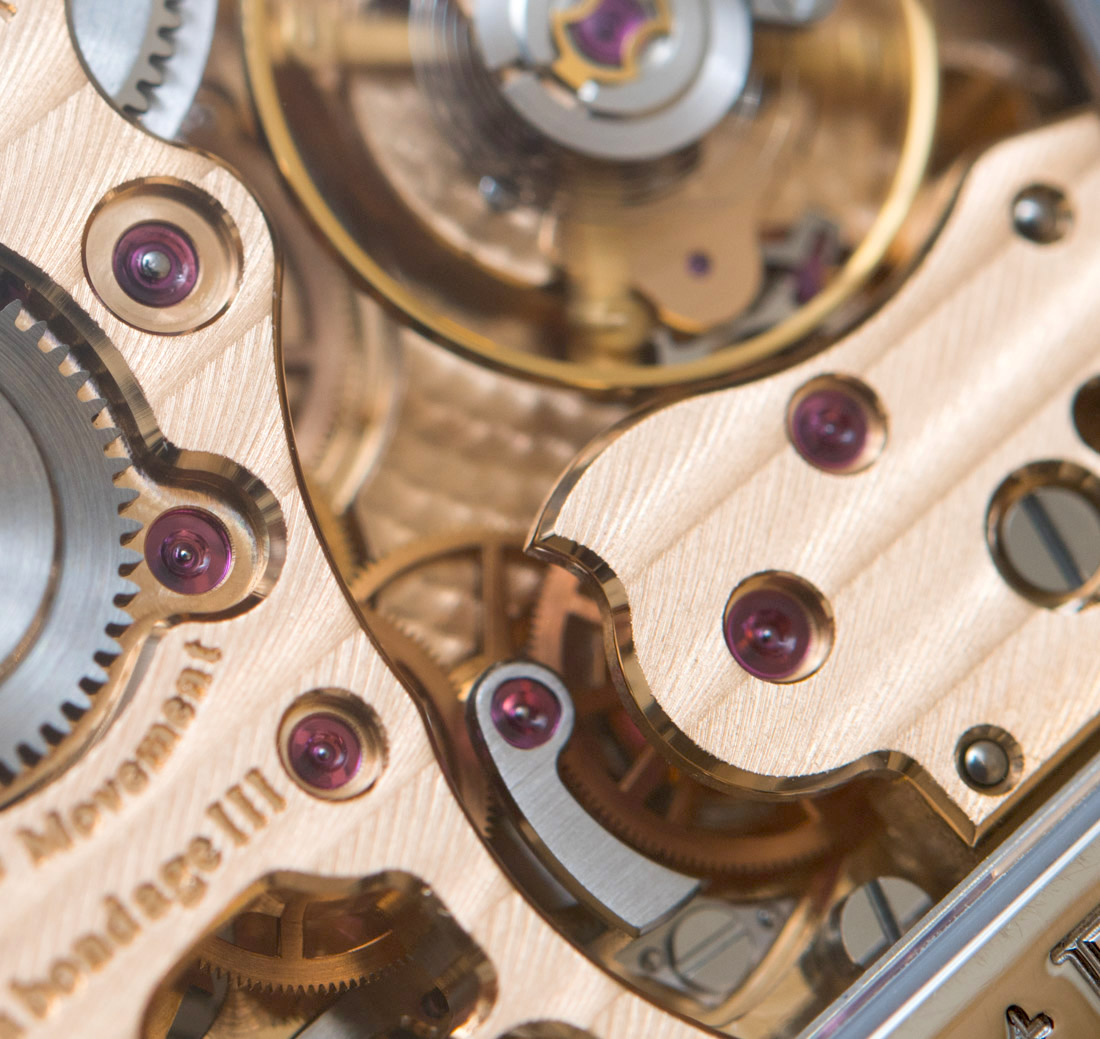 Unlike a fair number of one-feature-focused watches lately, the F.P. Journe Vagabondage III is fun to look at both from the front and back. The little details, like beveled and polished edges on the uniquely shaped bridges, plates, and cocks are all there as well, as one would expect from any watch in this price segment. 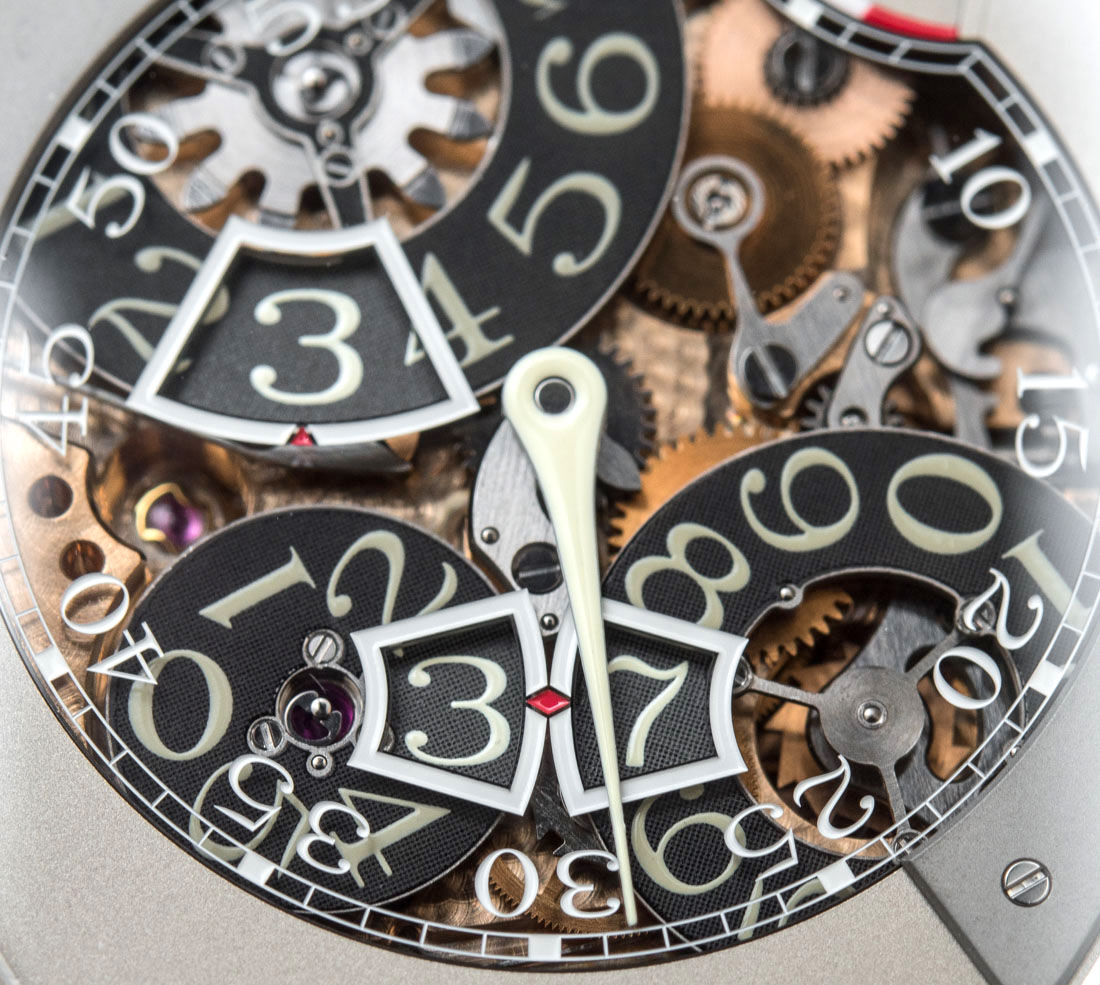 Solid finishing is (well, more often than not) a given by now in this segment, so what really makes this F.P. Journe Vagabondage III a muscle-flexing exercise for Journe is that with it he created a complex and very cool time display that many great manufactures have tried – but none have been able to create a jumping seconds just before. Names like Lange, Patek, IWC, and Jaeger-LeCoultre have tried different types of digital jumping displays and many more have played with the concept of a remontoir, but it was Journe’s genius that showed them how to do something none of the rest could. 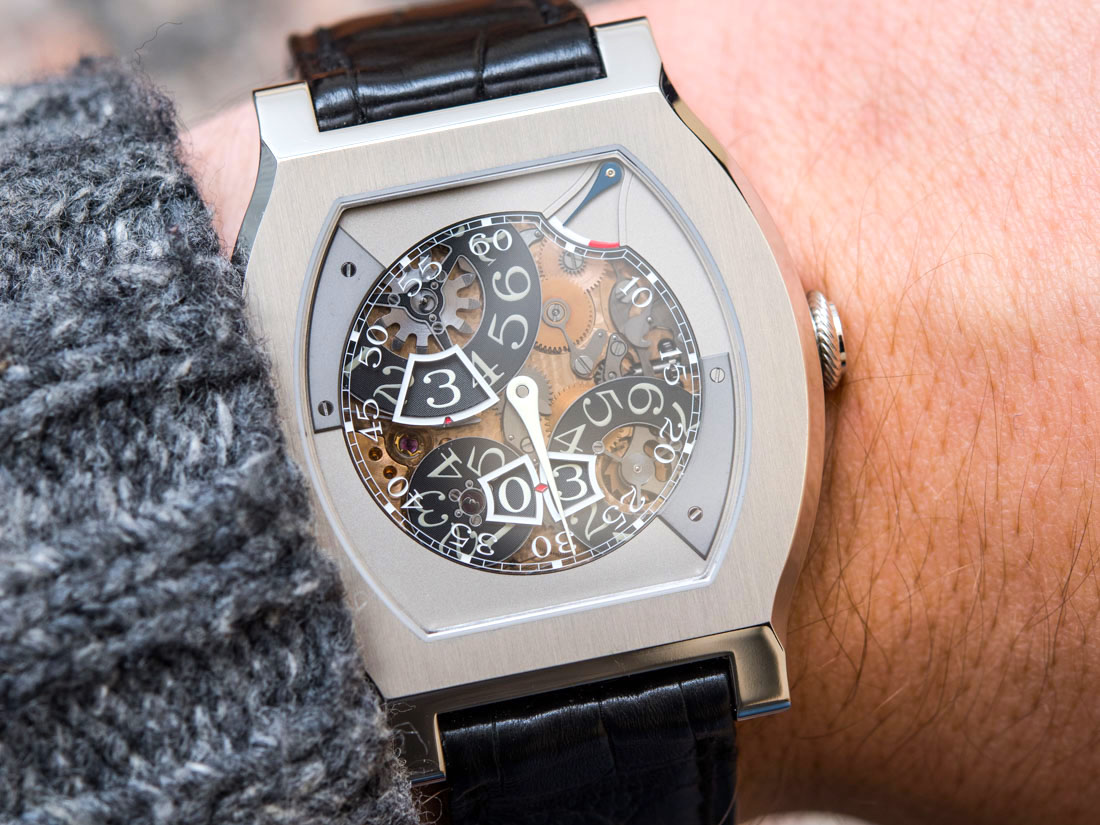 F.P. Journe says they have reserved set serial numbers from the 137 pieces made for the collectors who already own one or both of the previous Vagabondage models so that they have the opportunity of getting matching serial numbers for all three models. These little joys in life sometimes come at a dear price and that is the case once again, I’m afraid: price for the F.P. Journe Vagabondage III is CHF 54,000 for the red gold version and CHF 56,000 for the platinum variant. fpjourne.com