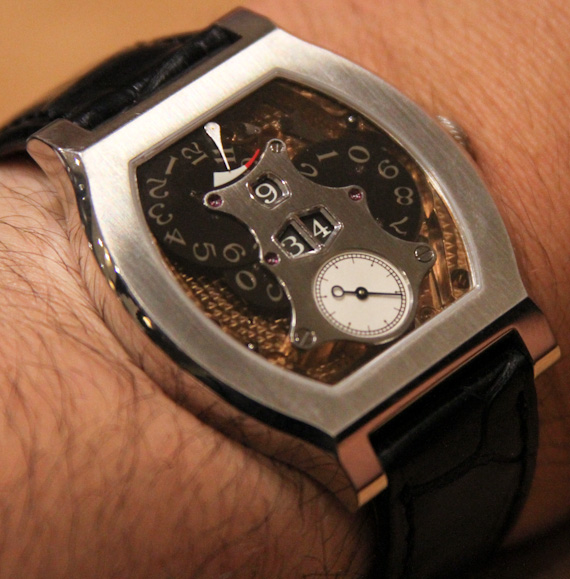 About a year ago, I wrote about the announcement of the F.P. Journe Vagabondage II watch release here. I was very excited about the watch as it was both beautiful and technically interesting. F.P. Journe rarely disappoints when it comes to new watch creation and this second installment in the Vagabondage line offered an even more sophisticated manner of digital time display. A little while ago I sat down with Francois-Paul, and he showed me this gorgeous creation.

One thing I am not sure about is the price. I might have forgotten to ask, and companies such as this aren’t usually the types to volunteer such information without asking. Sometimes I get so into the watch that I forget to make such inquiries. What I can say however, is that if you are not familiar with the brand and own other high-end watches, the price will likely outstand you. Prices for the Vagabondage II watch are $49,700 in platinum, limited to 69 pieces, and $47,900 in red gold, limited to 68 pieces. 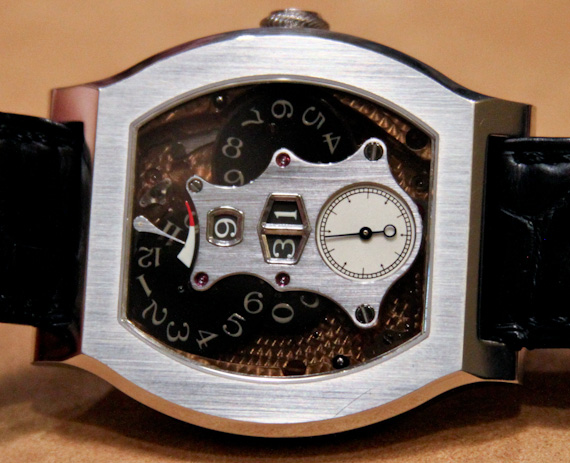 What will amaze you about the watch is the straight forward, simple presentation of the information and the complication. While not an easy watch to make, F.P. Journe makes it seem easy by having it all work so well, and smoothly. The watch features the time in a digital display, with jumping hours and jumping minutes. Mechanical digital watches are proving to be quite popular, and the mechanism is usually governed by a constant force escapement that makes sure the power from the mainspring barrel is used properly. The movement itself is the in-house made and designed F.P. Journe Calibre 1509, and is really gorgeous. Aside from jumping minutes and hours, it has a power reserve indicator for the manually wound movement, and a traditional subsidiary seconds dial. Like I mentioned in the previous article on the Vagabondage II watch, it most resembles the A. Lange & Sohne Zeitwerk in terms of functionality (that was released around the same time). Though the two watches are visually very different. The Calibre 1509 movement is actually made in almost all 18k  rose gold (something which is really rare). You can see the very nicely decorated movement in the back of the watch and through the dial. Journe does a great job at the finishing, and always makes his movements deliciously impressive to behold. The dial of the watch has a sandwiched smoked sapphire crystal. He wanted to have the the ability to see the movement through the dial, but not to take emphasis away from the time readouts. So as you can see, the movement along with the discs for the numerals can be seen through the dial, but the time display information really has your paramount attention. Can you see what I mean when I say that this is a sophisticated timepiece, but at the same time F.P. Journe pulls it off so well he makes it look easy and simple?

F.P. Journe is not a fan of massive watch cases. The Vagabondage II is in a reasonably sized case that is 37.5mm wide and 45mm tall. The flat “tortue” style case sits very comfortably on the wrist and feels very thin (only 8mm thick). As a limited edition, the watch comes in 69 pieces in platinum (the one I am showing you), and 68 pieces in 18k rose gold. On the rose gold version the time window and hands are in rose gold, while for the platinum version they are in white gold. You can see me wearing the watch. While it doesn’t have a giant “look at me presence” it is does seethe incredible good taste and refinement. F.P. Journe is really a master at what he does. 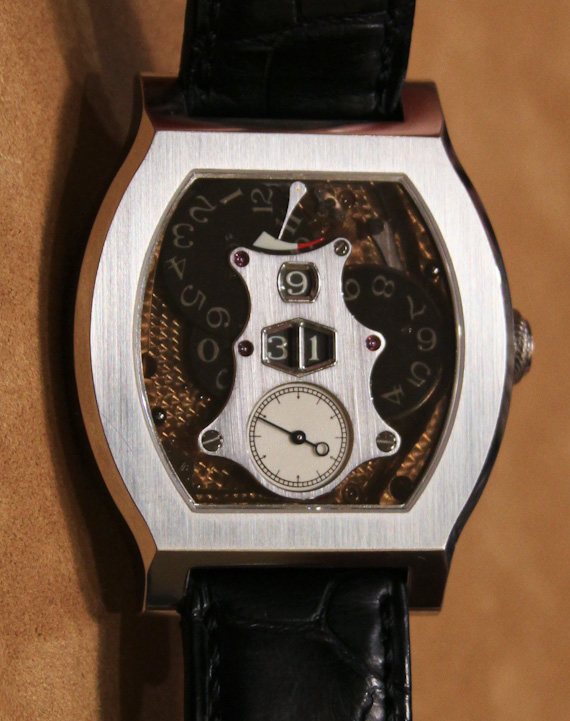 Operation of the watch is straight forward – and again it is very easy to read. As seen in the little video I took – you can see the watch changing minutes. Look at how fast and simple the minute changes (because they are jumping minutes). How cool is that? It goes without saying that I want a watch like this. I’ll not likely be in a position to afford it any time soon, but it I can certainly appreciate this and other F.P. Journe timepieces when I see them, and understand why those with “choices” often opt for a F.P. Journe in their collection.

Number of parts
Movement without dial: 223
Cased-up on leather strap: 256