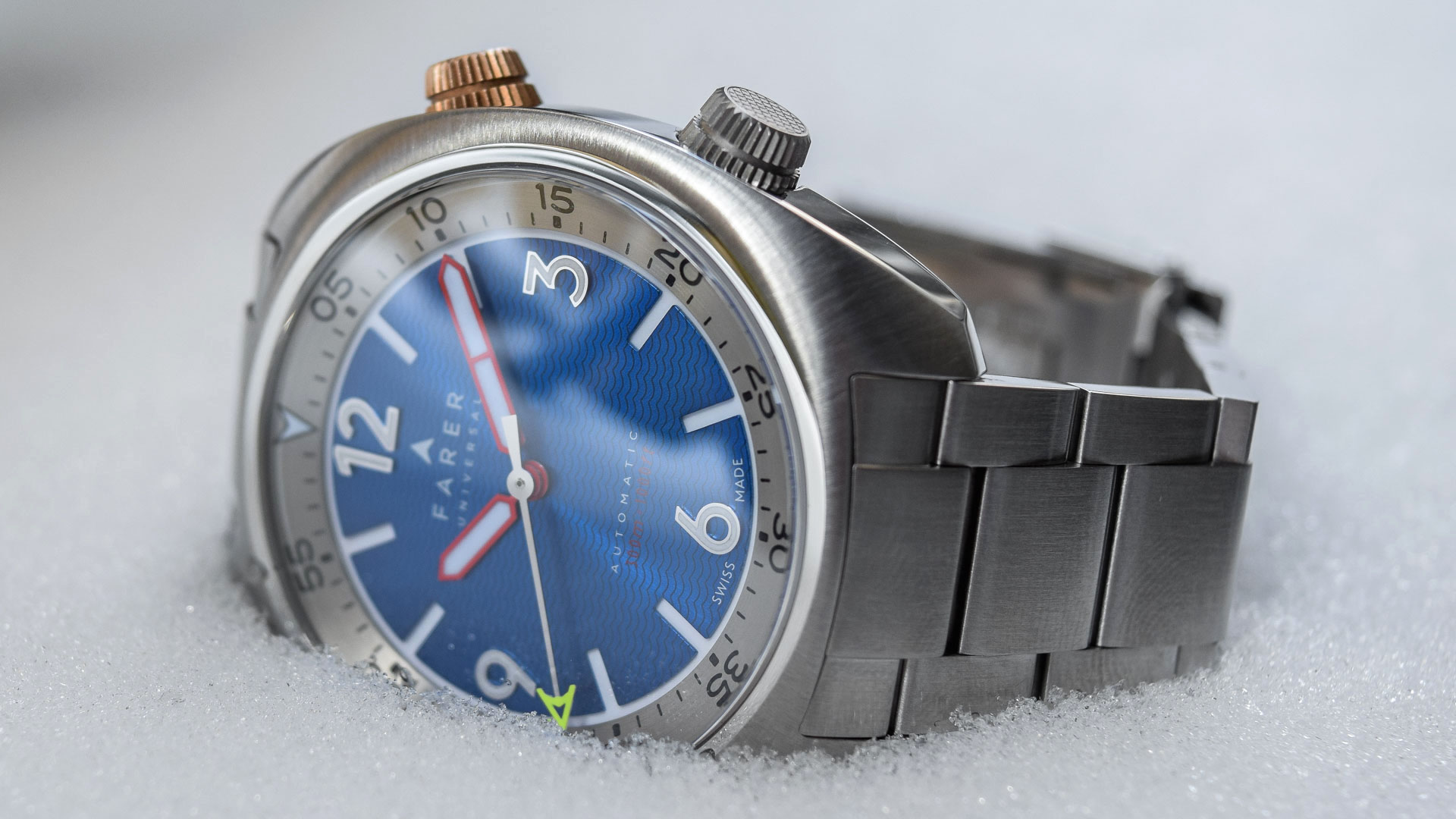 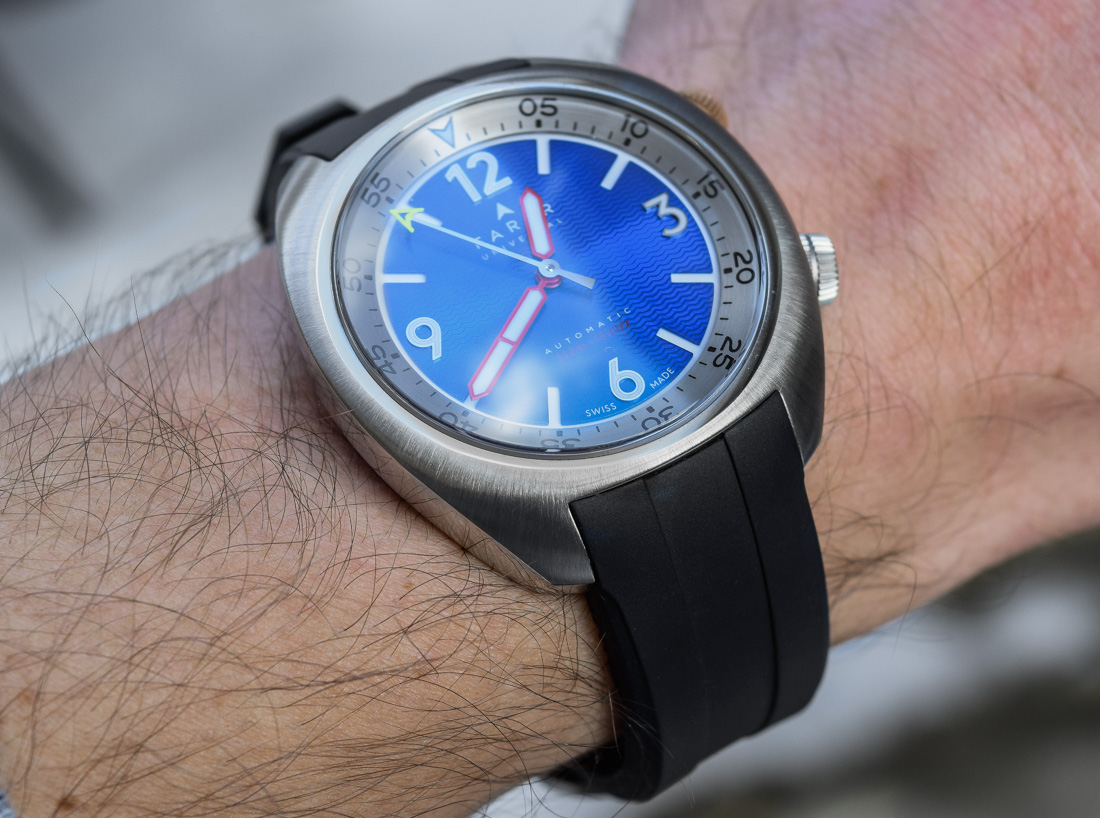 British watchmakers Farer Universal have built up a respectable following and considerable buzz with their ever-growing collection of reasonably priced, tasteful timepieces with historic design elements, all powered by Swiss movements. Thus far, Farer have avoided producing a specific homage to any particular watch from the past, instead utilizing their favorite aspects from an entire era of watch design to create totally new pieces as much at home in current days as they would have been in the 1950s or ’60s. That is, until now. Farer’s recently released Aqua Compressor series, available in three different iterations, is Farer’s loving ode to the dual-crown Super Compressor cased diver’s watches of the 1960s and ’70s. Here is my review of the Farer Aqua Compressor Hecla. 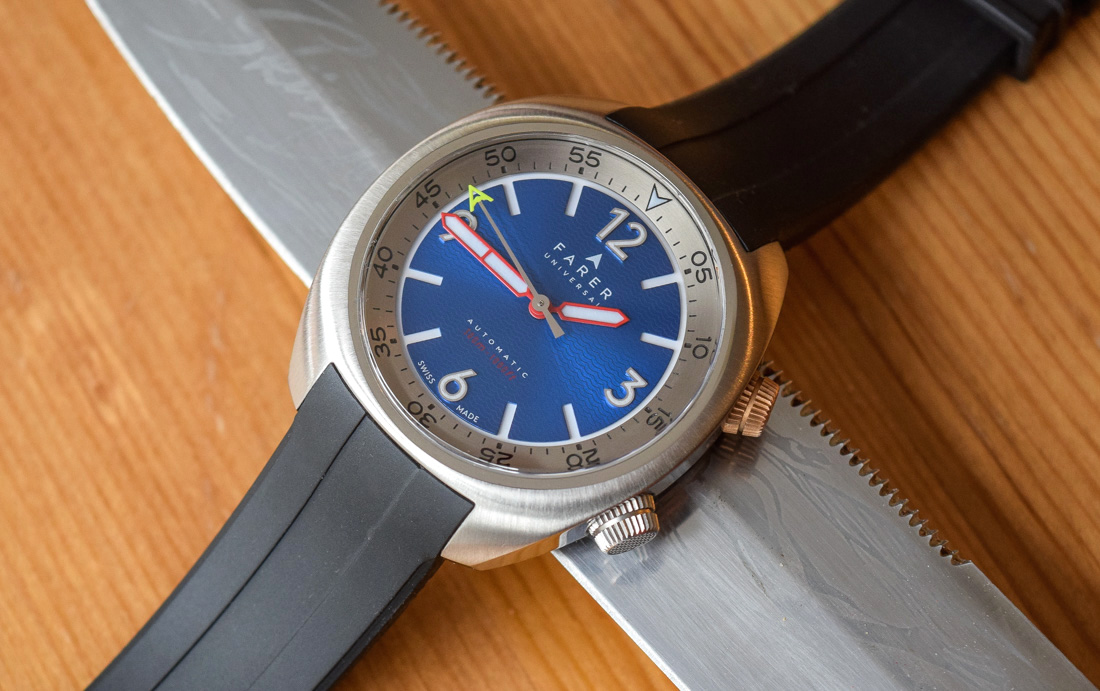 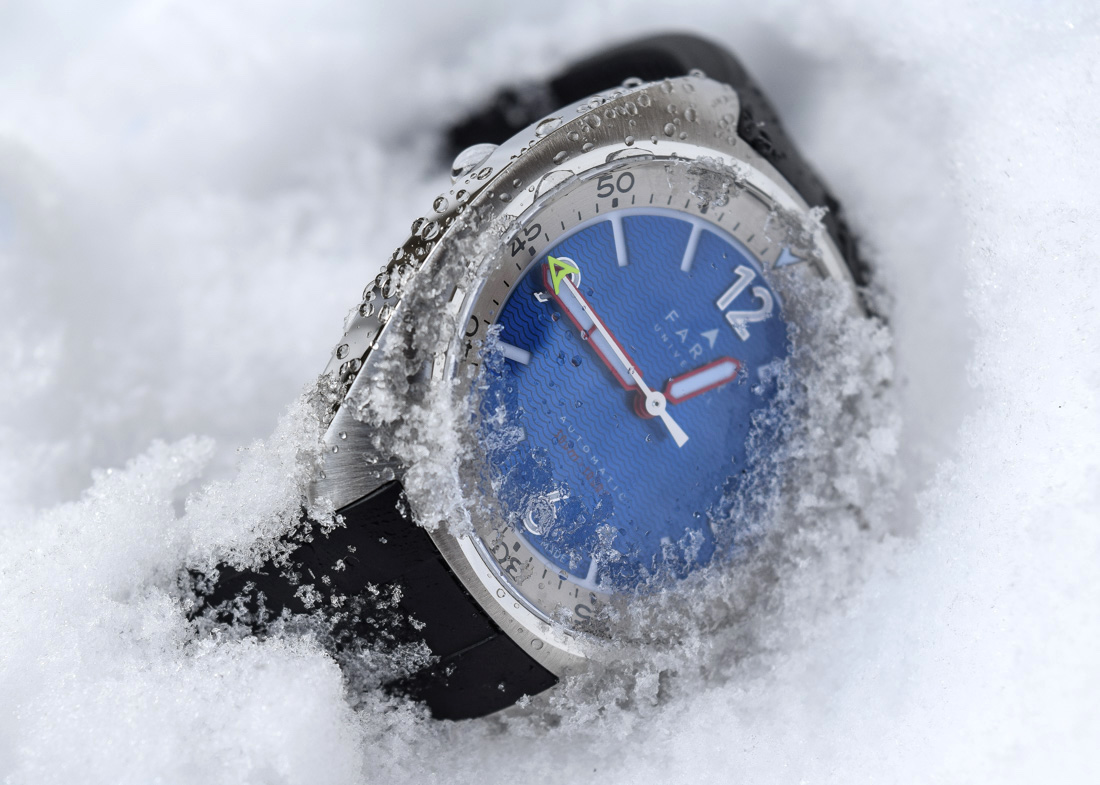 For transparency, I count myself among the growing legions of Farer fans. I reviewed Farer’s Oxley GMT Automatic for ABTW last year and found it a tastefully-executed and interesting piece, which also represented an excellent value considering the top grade ETA 2893-2 beating within. Being a certified commercial diver, US Coast Guard veteran, and general nautical nerd, I jumped at the opportunity to check out Farer’s first attempt at an ocean-going bottom timer in the Aqua Compressor. With all that out of the way, we need to talk about the most defining element of the Aqua Compressor and its ancestors the Super Compressors – the dual crown case design. 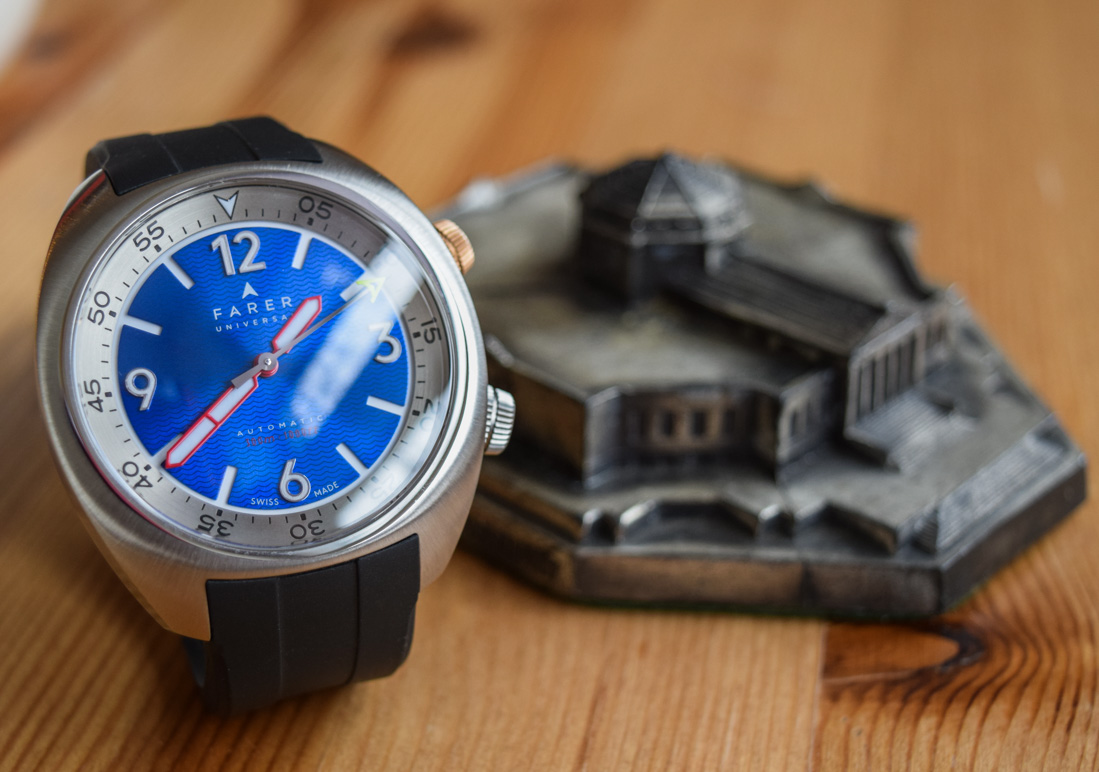 So far, Farer’s collection has utilized the same (or a very similar looking) 39.5mm wide case with a single, traditionally located three o’clock, non screw-down crown (in bronze, as is Farer’s custom). Farer’s first diver is housed in a totally new case. For the Aqua Compressor, Farer took some of the key aspects of what made the old Super Compressor watches cool, most notably an internal bezel and two crowns, and updated the whole idea for a definitely vintage-style-but-modern-feeling piece. Two tapered crowns – the upper in bronze for setting the time and the lower in stainless steel for operating the internal, elapsed time bezel – complete the Super Compressor look while remaining aware of modern technological advances and Farer’s distinctive bronze crown style. 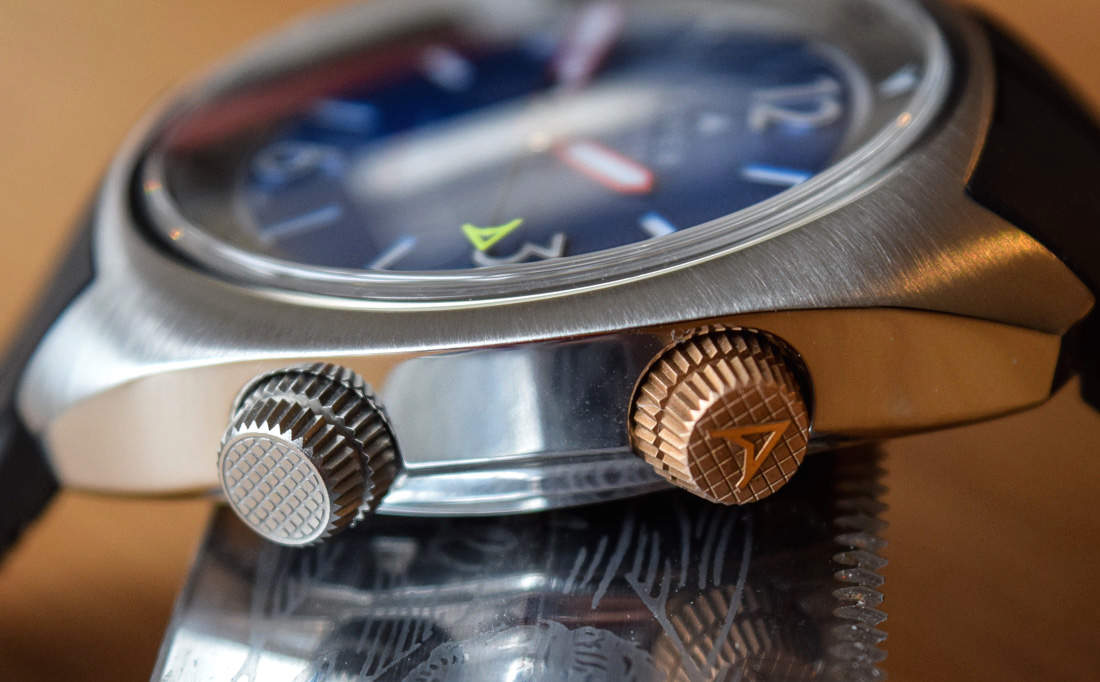 Part of what made the vintage Super Compressor watches cool was their method of achieving 200m of water resistance. Rather than working toward an especially water tight case with a crown and caseback which screwed into respective gaskets, Super Compressor makers Ervin Piquerez S.A. (EPSA) instead allowed water pressure to do some of the heavy lifting. By designing a case which used increasing water pressure to squeeze the caseback, crystal, and crowns into their gaskets for water tightness. While the sheer number of Super Compressor watches to be found in good condition, from makers like Wittnauer, Hamilton, Bulova, Enicar, and Benrus, speaks to the effectiveness of their utility as a diver’s watch, it’s also not so unusual to spot a vintage Super Compressor which has been flooded. With that in mind, Farer elected to update EPSA’s idea into a more reliable, more water-resistant package and for that, I thank them. 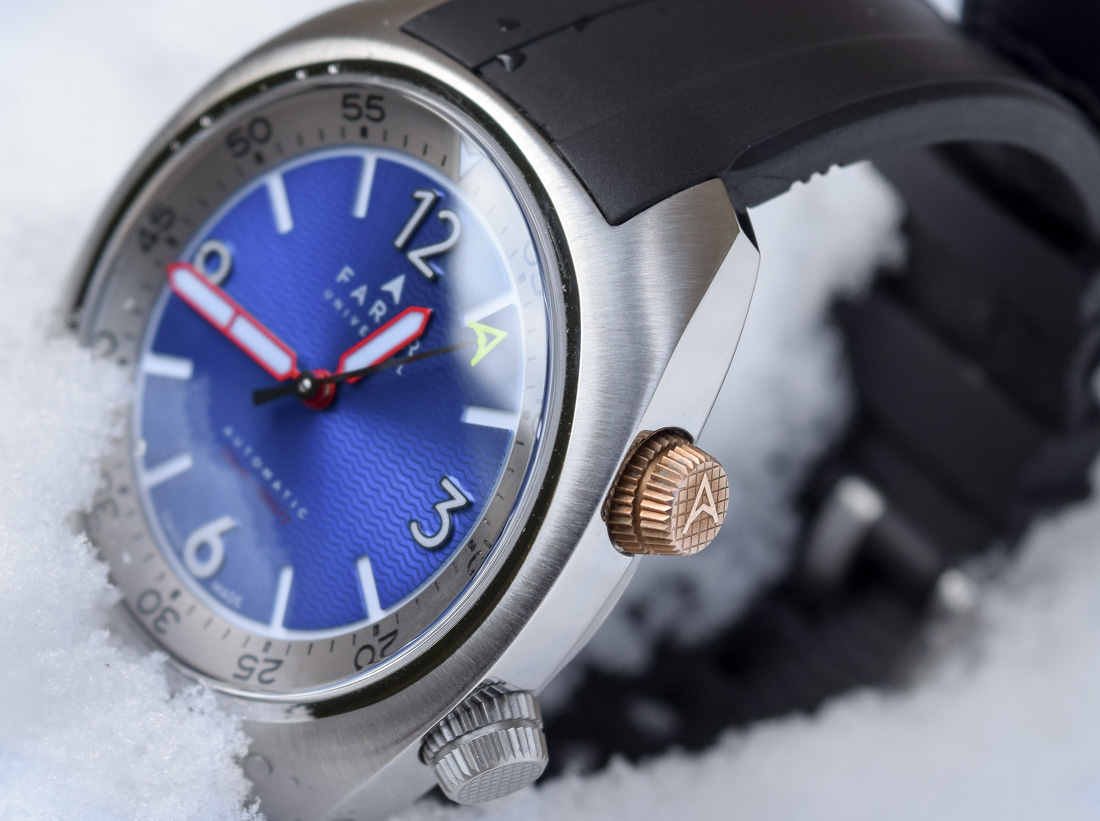 With that in mind, the dual crowns on the Hecla are, pretty surprisingly, water-resistant to 100m when screwed out and resistant to 300m screwed in. So while Farer wanted to integrate not only the visual Super Compressor design, all the way down to the crosshatched pattern, but also the way the watches achieved their water resistance, they still went for the more universally accepted threads and gaskets approach to pump up the reliability and water resistance to make a modern, professional grade diver’s watch. I will say the crown having some water resistance in the screwed out position does aid in the argument for an internal bezel, a concept traditionally plagued by the “When do I set this?” question as most divers would never unscrew a crown in or anywhere near the water for fear of flooding their watch. 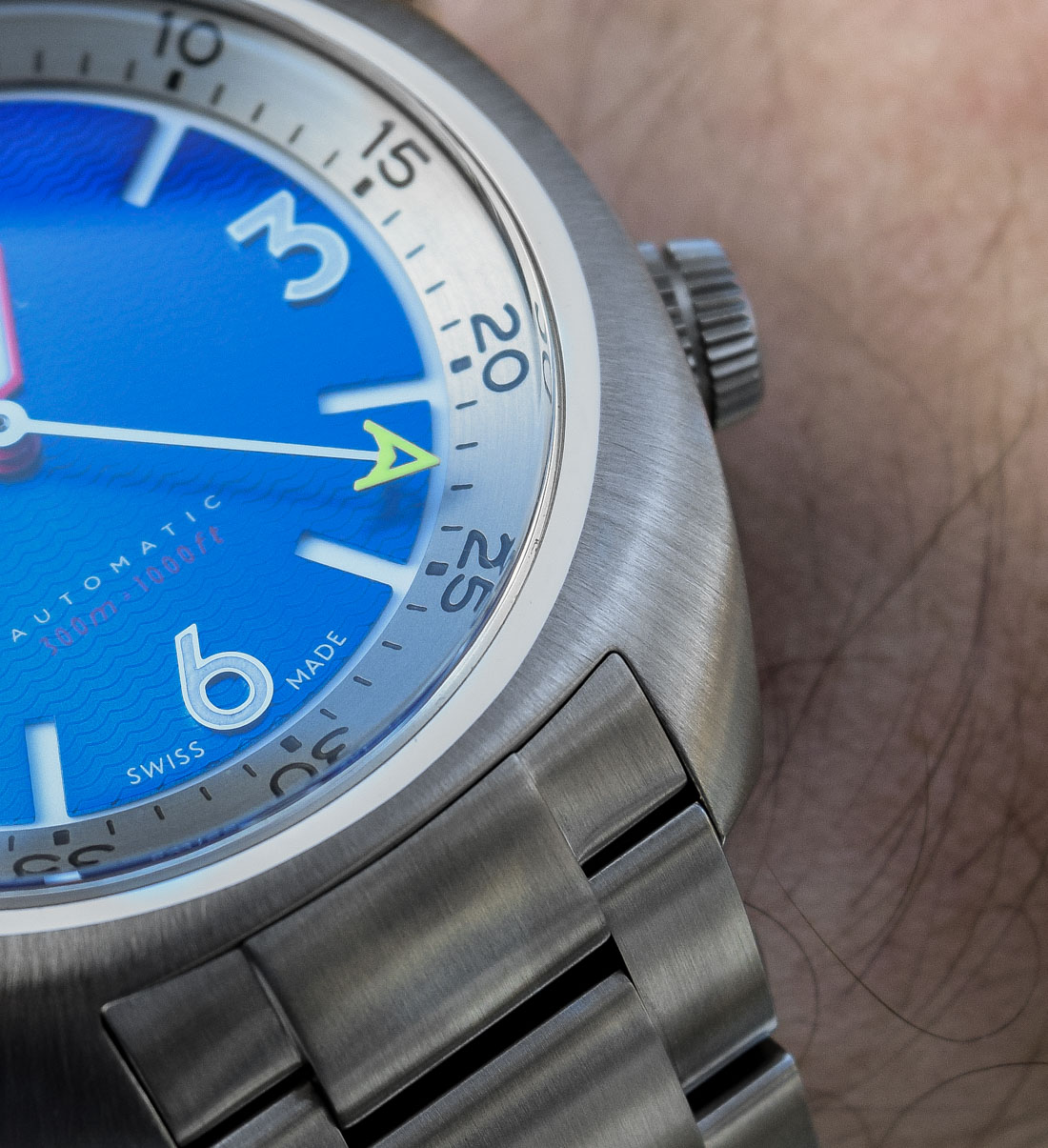 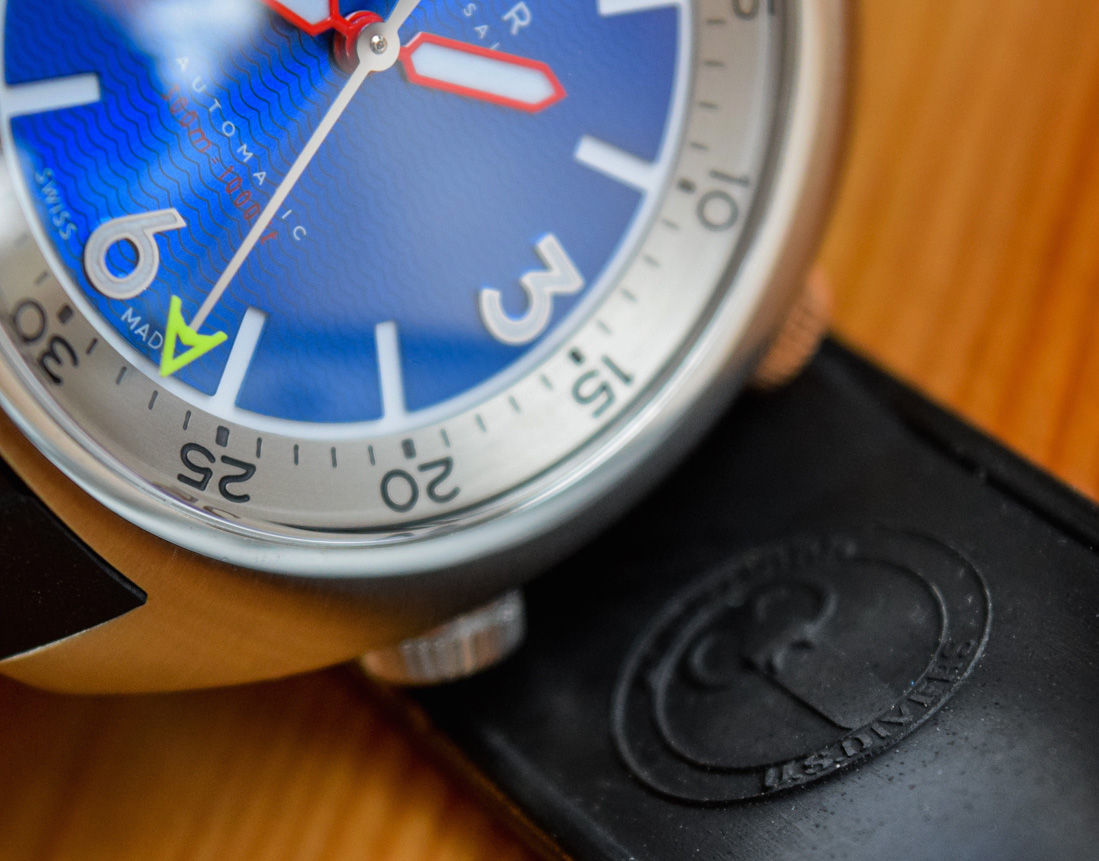 I must mention here that screwing the crowns in on the Aqua Compressor can be a little bit difficult due to the somewhat steep angle at which the crowns meet the case. Because it’s hard to feel where exactly the crowns should start screwing in, it’s easy to start them a bit cross-threaded, which then means you have to unscrew and restart. While not a big deal overall, it’s worthy of mention and would mean I’d be hesitant to mess with the crowns in the water even though they would theoretically be fine. Personally, I doubt any hardcore divers will be taking the Aqua Compressor diving, but I’m confident the watch could handle it. 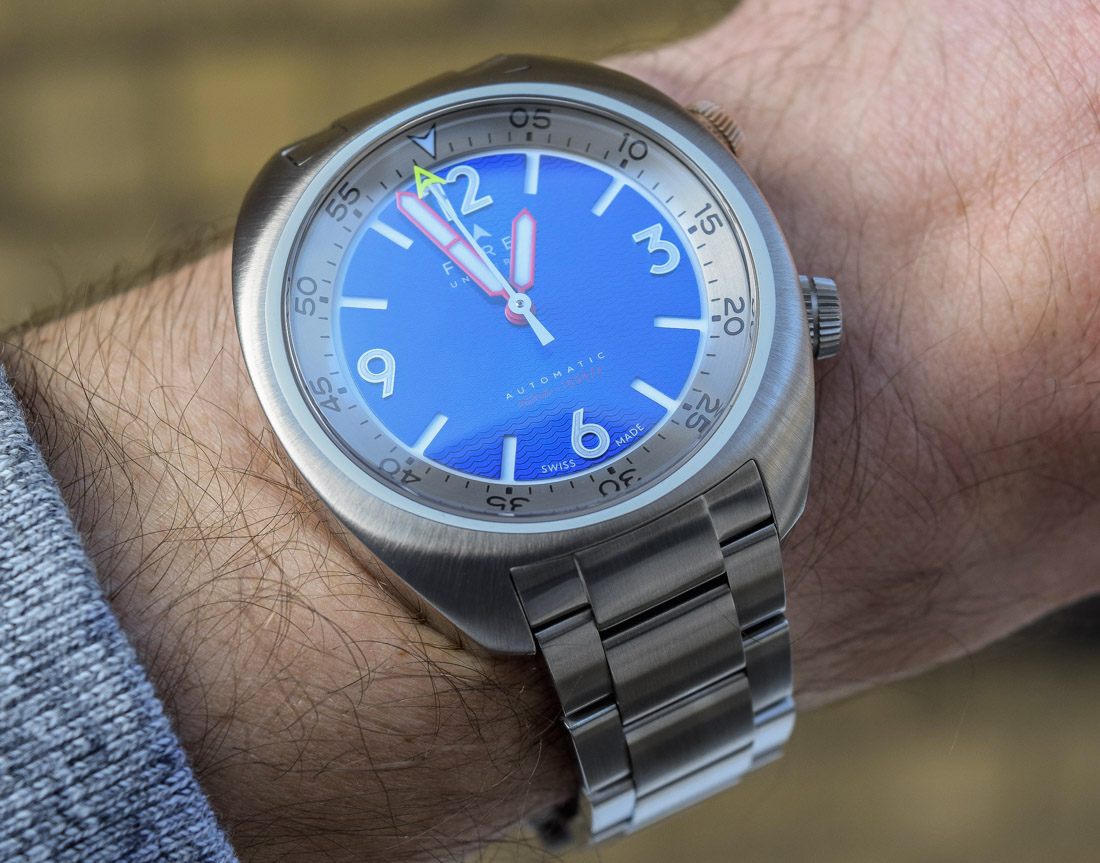 As far as size, the new Aqua Compressor’s cushion style case is a very wearable 41.5mm in width by 45mm in length. A reasonable 12.5mm thickness and 20mm lug width add to the compact package and make the Aqua Compressor a joy on wrists of many sizes including my own somewhat petite 6.25” wrist. The crowns don’t stick out very far, owing to their two and four o’clock positioning, and don’t dig into the back of the hand even when the watch is worn loosely. This watch, especially on the rubber strap, wraps the wrist really well and is extremely comfortable. You actually do forget you’re wearing it, which is impressive for any watch bigger than about 40mm, at least for me. Rounding out the vintage style case is a slightly domed sapphire crystal with anti-reflective coating on the inside only. Like on other Farer watches, the crystal is excellent and adds some nostalgic watch feel, but is not the super domed crystal of some of their other offerings. While part of me would have loved another giant domed crystal like we saw on the Oxley GMT, it probably would have made the Aqua Compressor much taller and less comfortable. 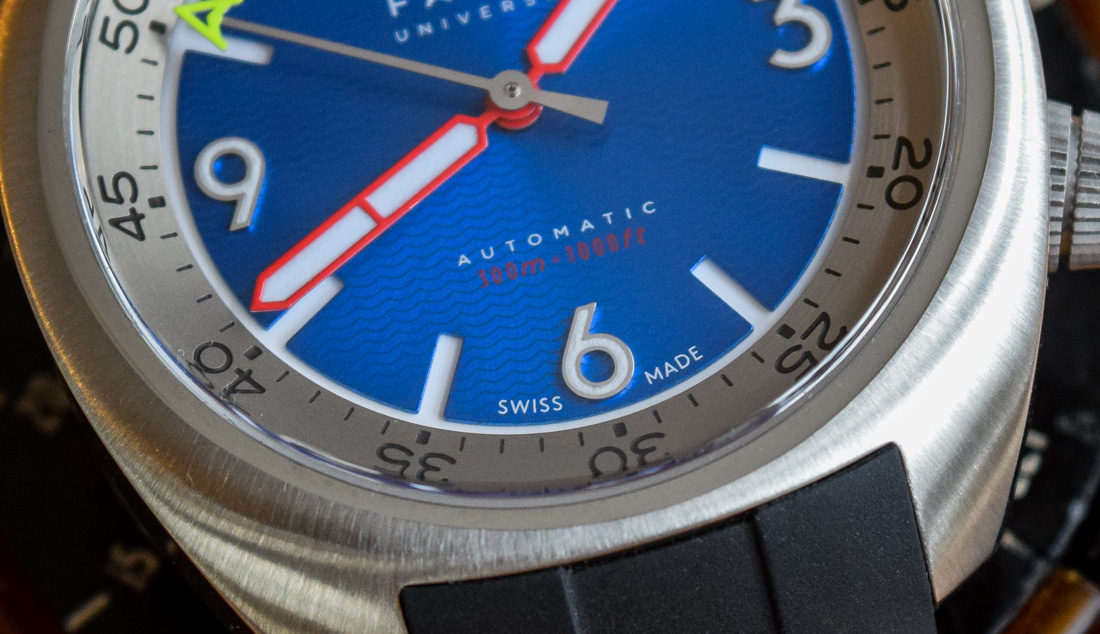 Case finishing is also excellent, with a finely-brushed top other than a very thin polished ring encircling the crystal. This little polished ring does wonders to catch the light and make the front of the watch even more interesting. Case sides are polished as well and the brushed-top-polished-sides setup reminds me of Farer’s case finishing on some of their other more terrestrial models. It’s notable to see how the Farer aesthetic has been pulled from their other decidedly less funky models to a degree which keeps the Aqua Compressor looking different but still very much related, like a diving, surfing, Aloha shirt-wearing cousin of the more straight-laced models. The Farer Aqua Compressor is available in three very distinct variations, as has been Farer’s way in their other releases. Sharing the same case, strap, bracelet, and general design, each version of the Aqua Compressor differentiates itself from its siblings in its dial and internal bezel color and look.