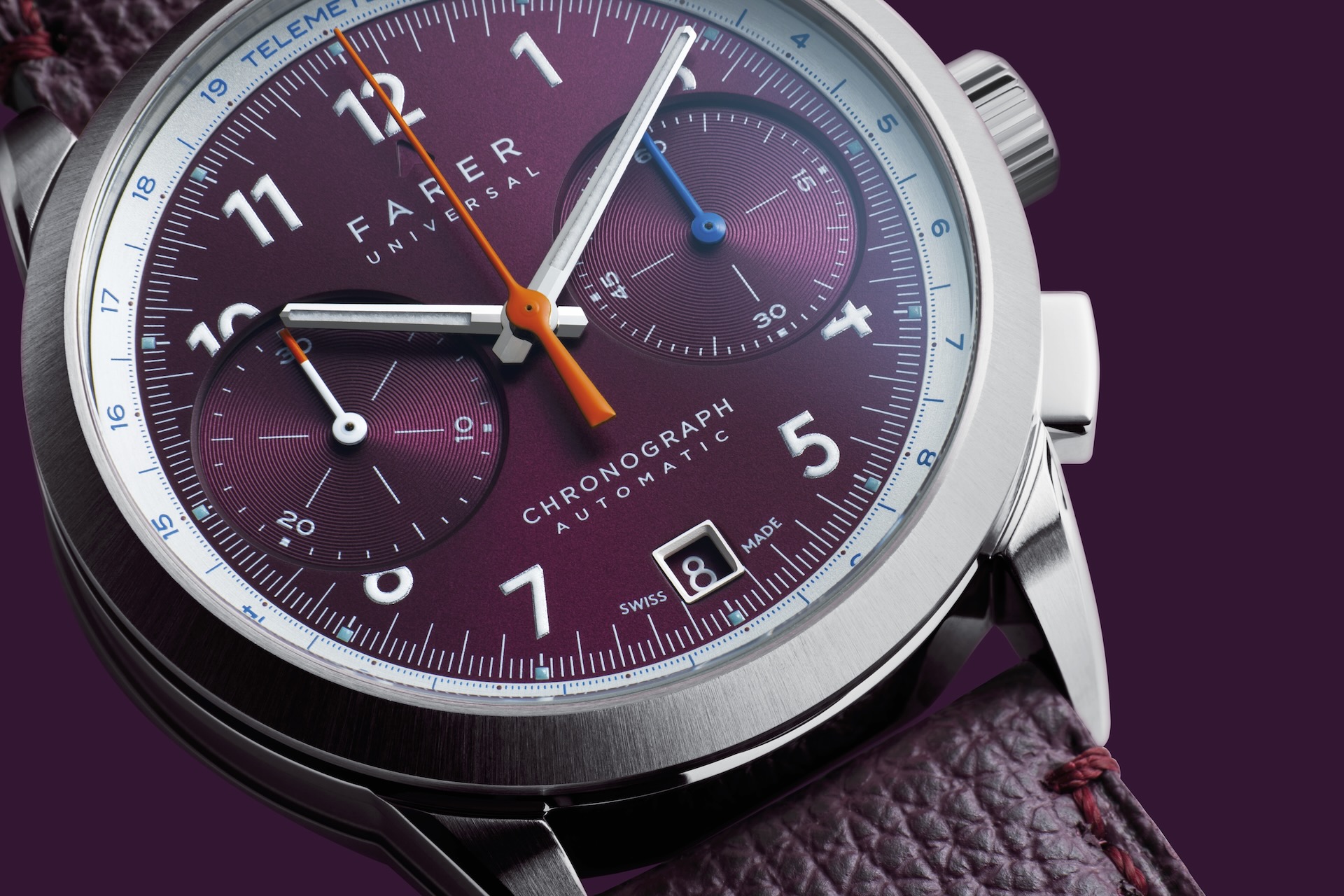 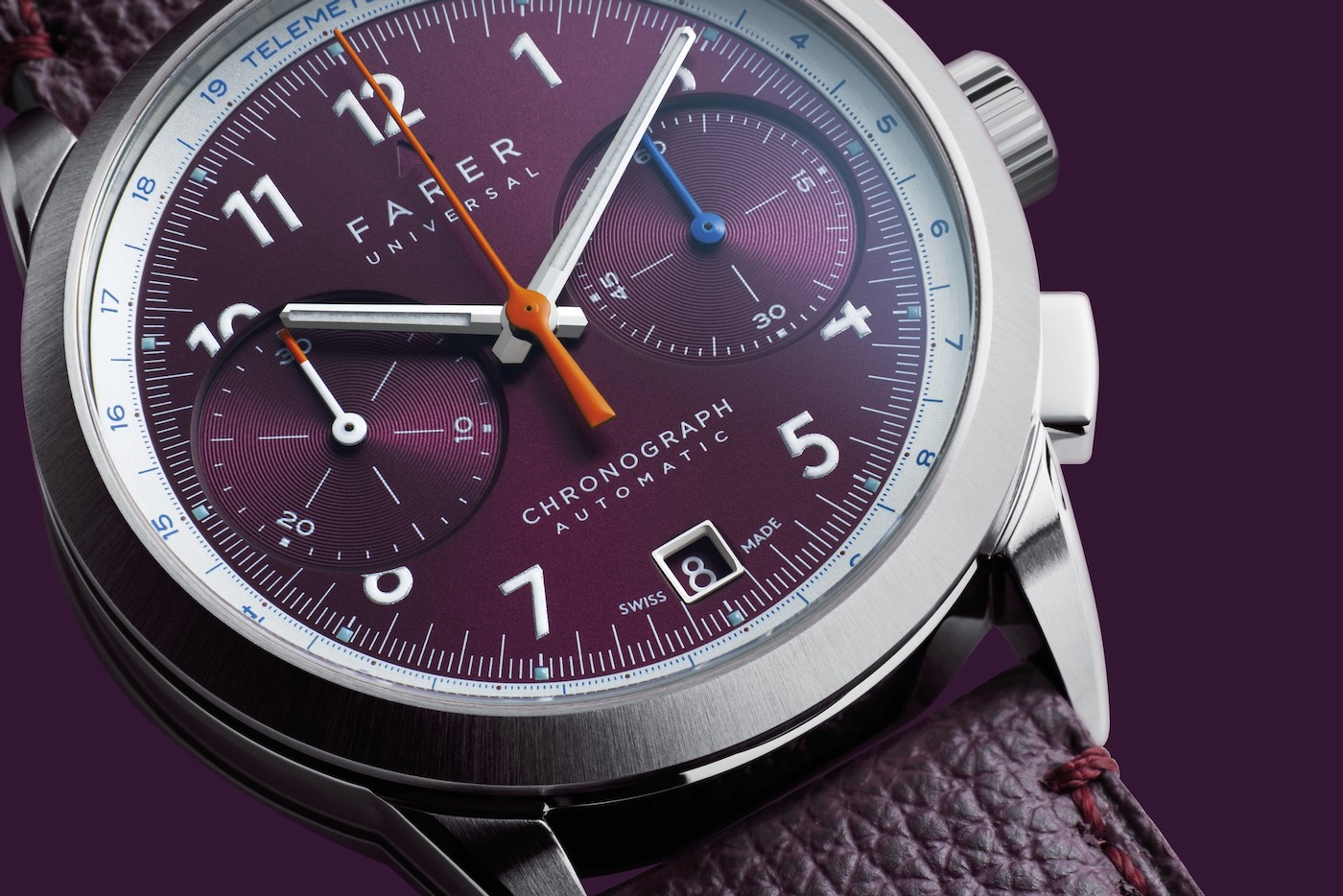 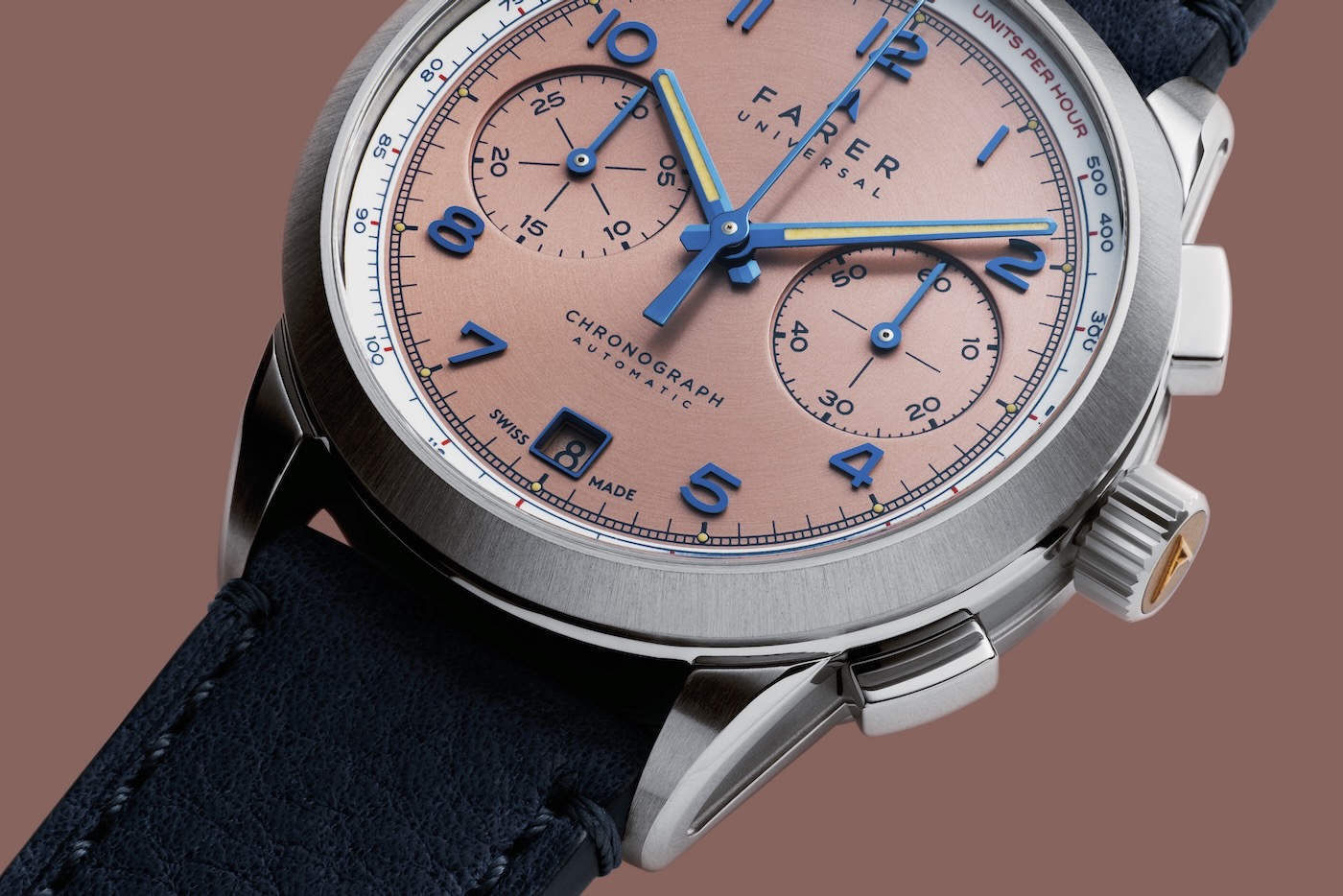 The stainless-steel case of the Chrono-Classic is familiar, as it echoes the lines of previous models, like the Cobb Mechanical Chronograph and Lander Chronograph. However, you will find a few changes to the 39mm case (45mm-lug-lug), including sunburst brushing on the bezel and a switch from a solid bronze crown to a bronze-capped crown embossed with the Farer A. The case height has also increased slightly due to the new movement, up to a still-respectable 13mm. Not bad at all for an automatic chronograph, and, when combined with the otherwise modest dimensions, the Chrono-Classic is certain to wear well on a wide range of wrist sizes. 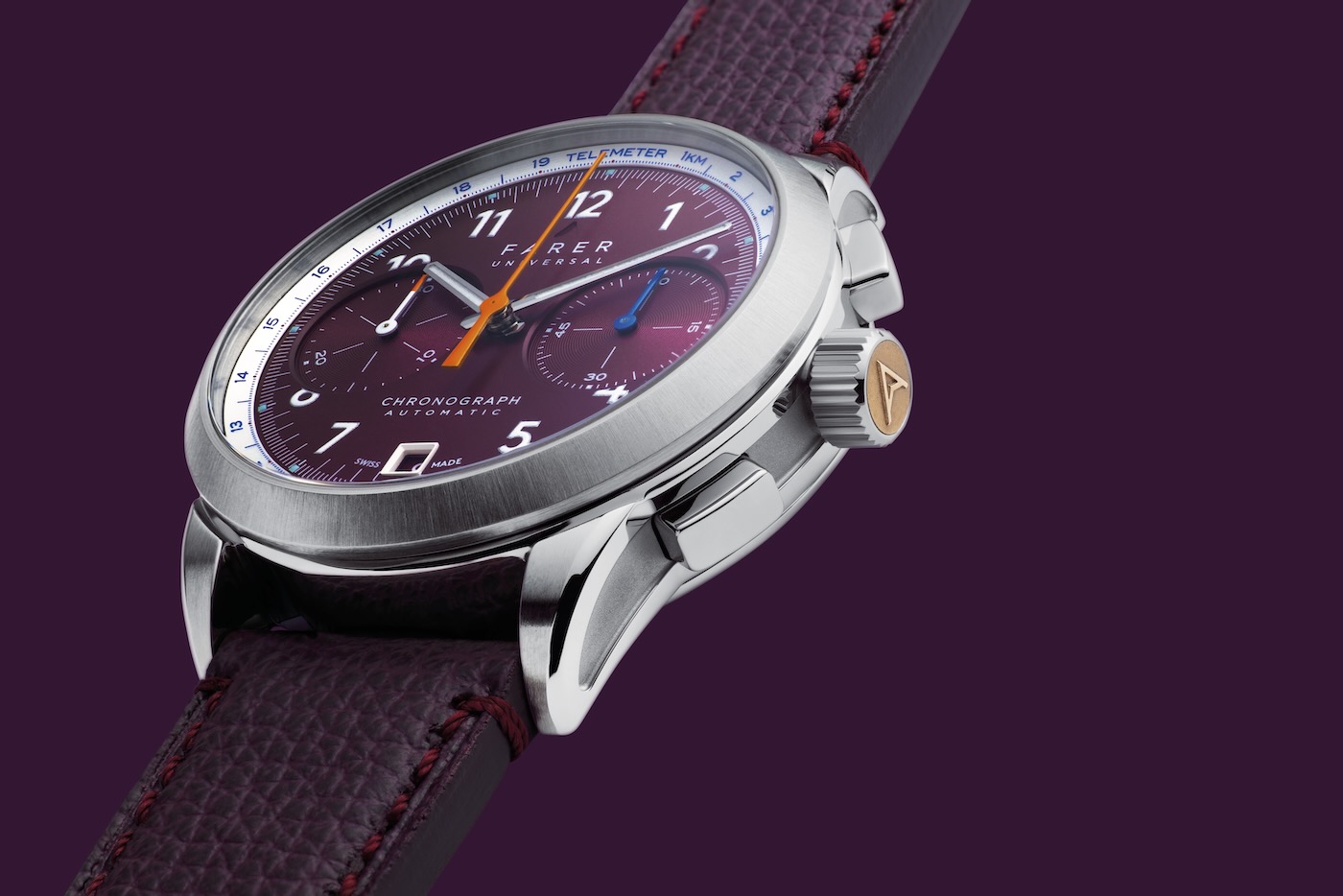 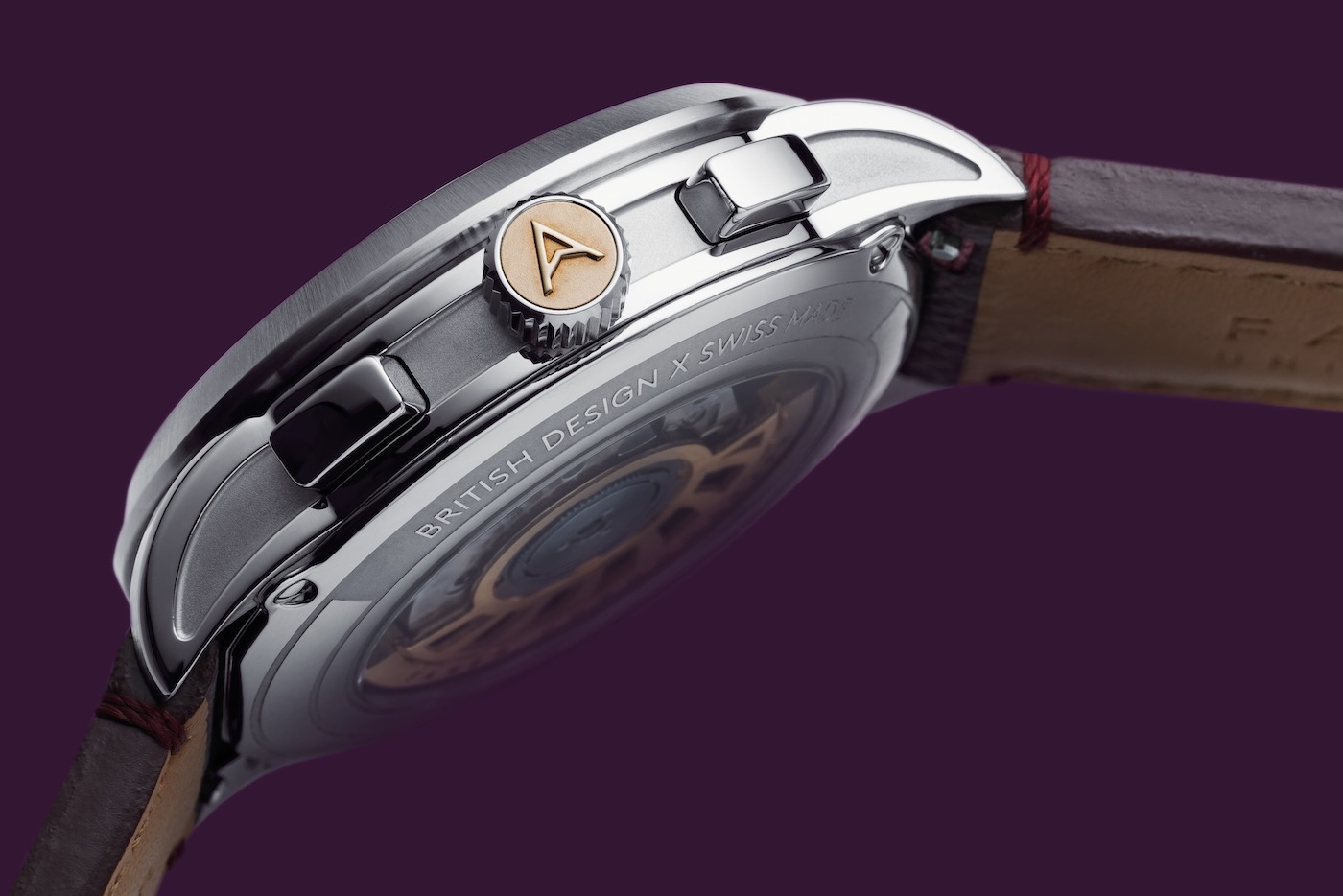 The Chrono-Classic is available in three colorways, each inspired by a British Olympic gold medalist. Farer has never shied away from experimenting with novel color combinations, and that’s the case once again, especially with the deep magenta Swann model. This model was named for Sidney Swann, who took gold in Men’s Eight Rowing in 1912, becoming the first Manx person to win Olympic gold — a feat that wouldn’t be replicated for another century. The Swann’s sunray magenta dial is set off by “duck egg blue” accents, an orange chronograph seconds hand, and orange and blue accents for the two sub-register hands. The watch comes mounted on a cardinal-burgundy leather Granolo strap. 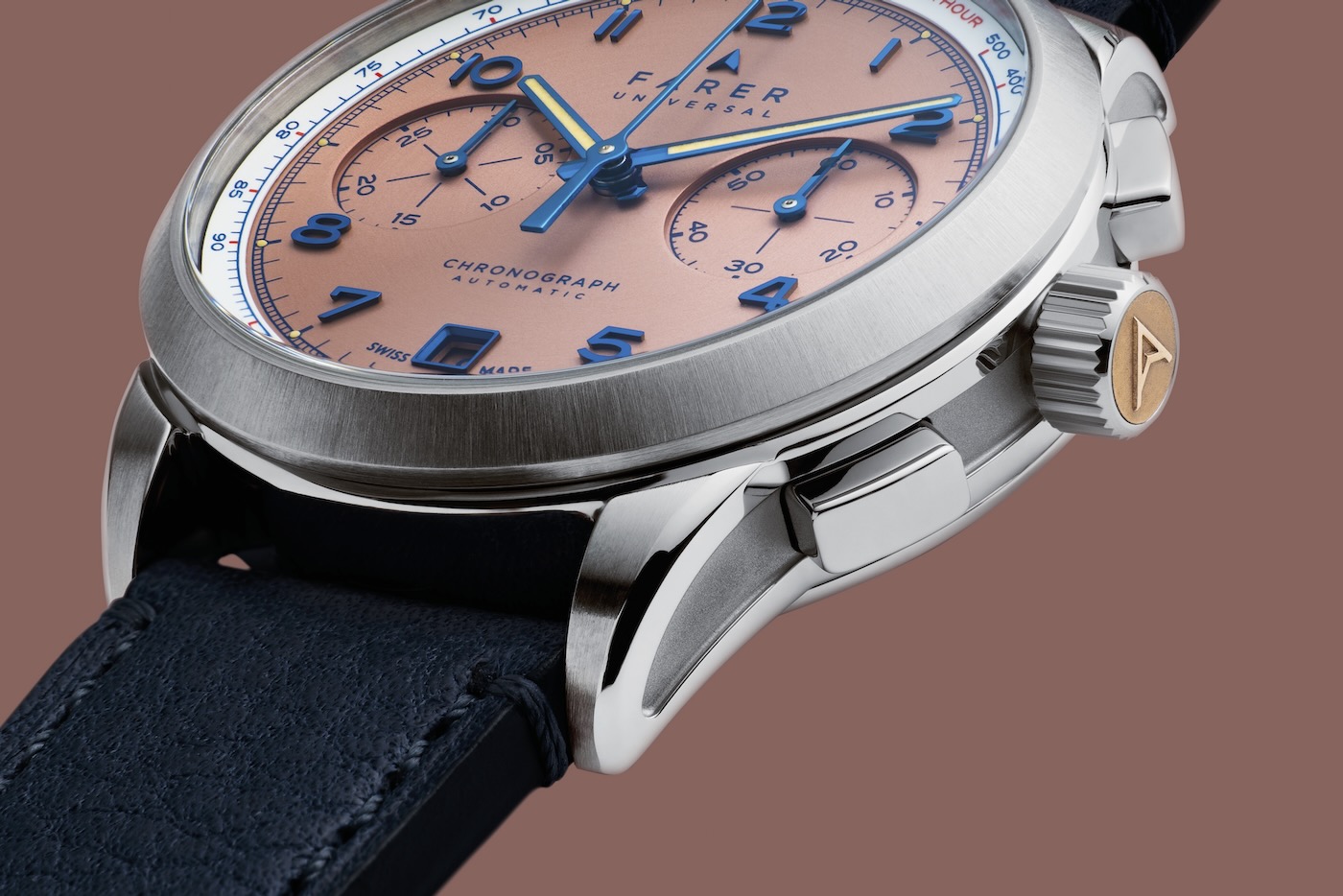 Like the Swann, the Meredith also utilizes Arabic numerals, but this time on a copper salmon dial with navy numerals. Named for Leonard Meredith, gold medalist in Cycling Team Pursuing at the 1908 Olympics in London, the Meredith is easily the most dressy and opulent of the bunch, albeit with a few unexpected pops of color. A close look at the white tachymeter ring reveals a touch of red on the markers, set off against the white background and the rest of the blue numerals. 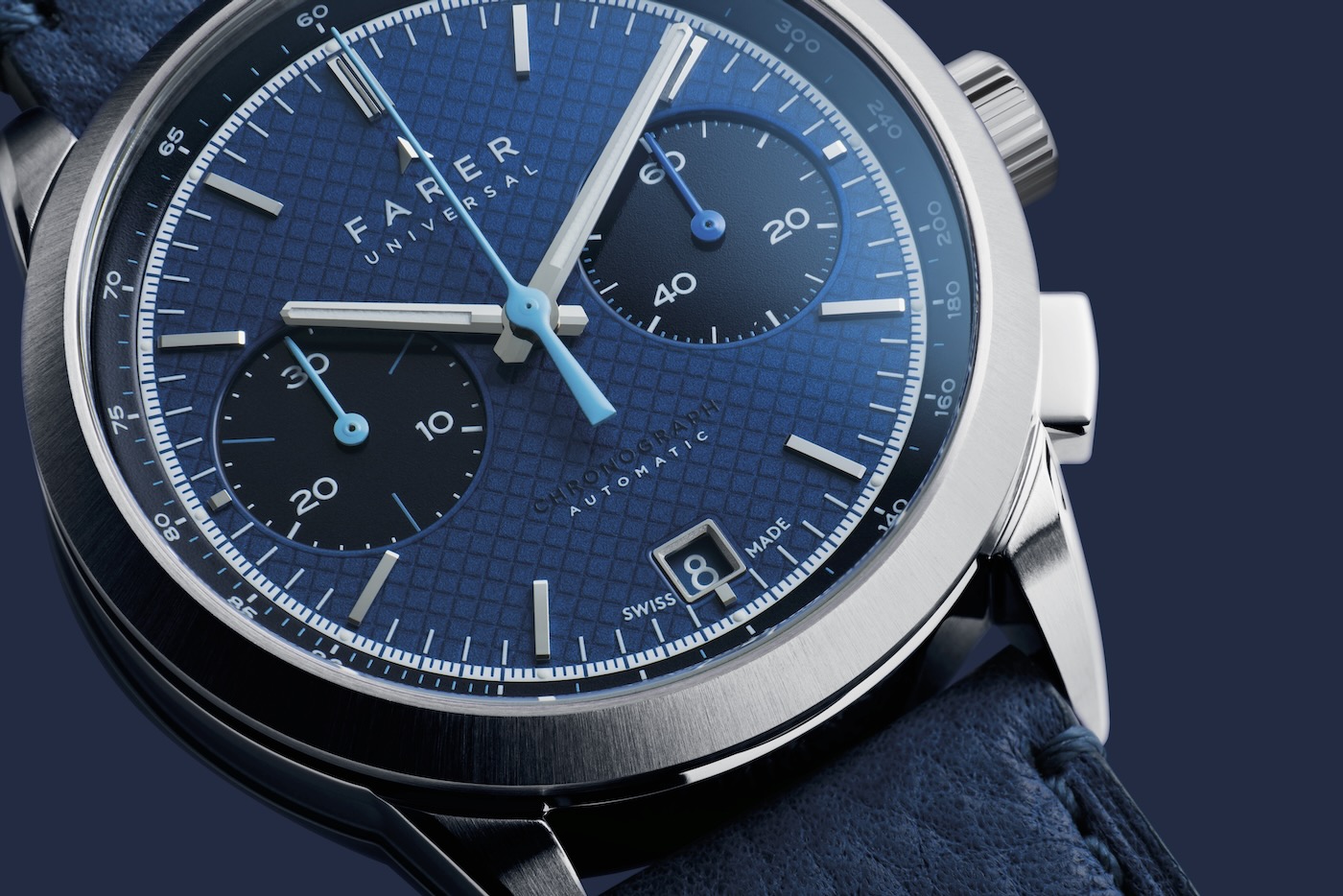 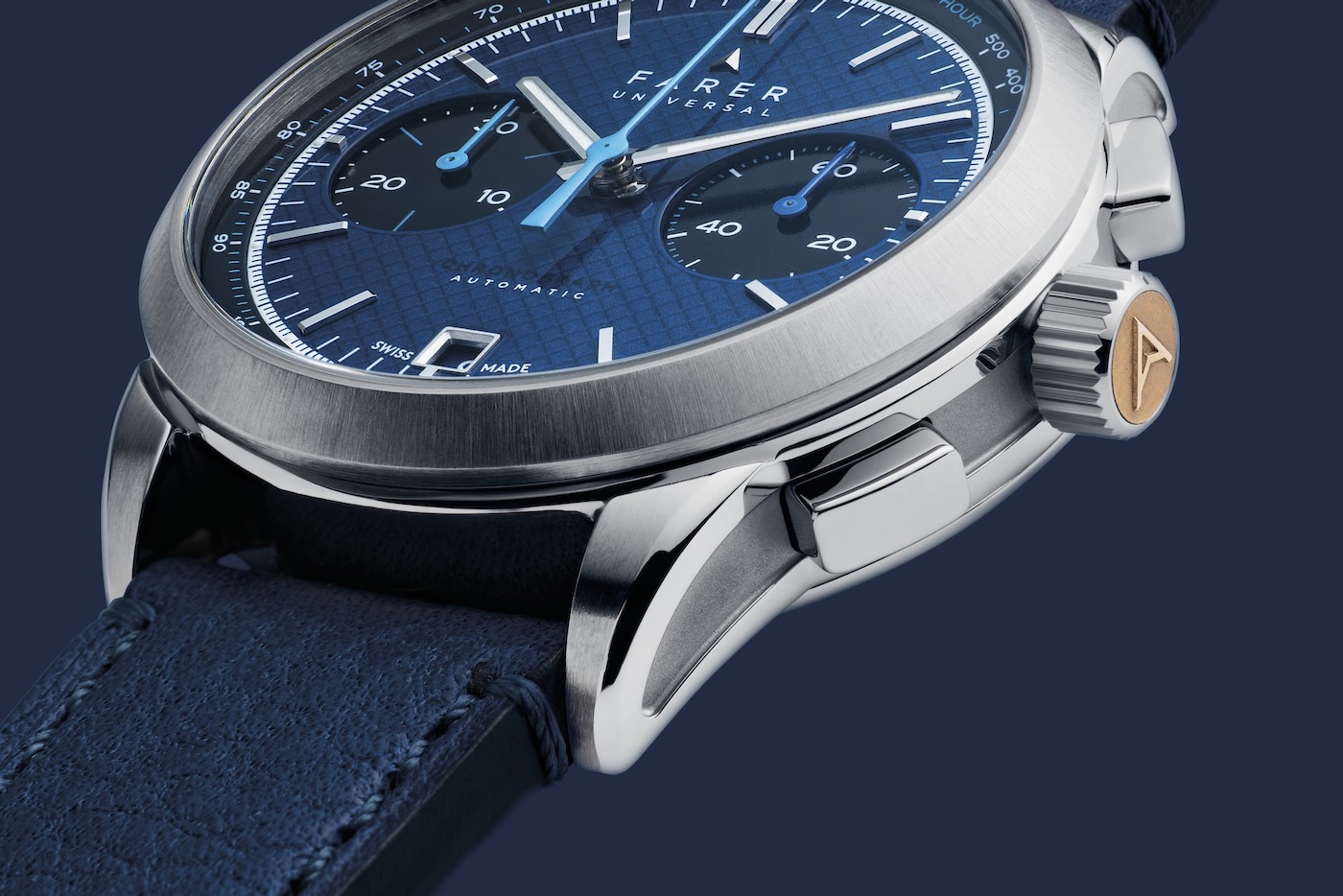 Finally, the Jackson is named after Arnold Jackson, who won the gold medal in the 1500m during the 1912 Olympic Games, running the race that’s come to be known as “the greatest race ever run.” Not bad for a 21-year-old who had to enter the Olympics privately after not making the official Great Britain team. Unlike the other two models, the Jackson trades Arabic numerals for stick indices and a blue-on-blue-on-blue color scheme. The French navy dial also features a pique pattern, with accents of midnight and sky blue set off against the navy. 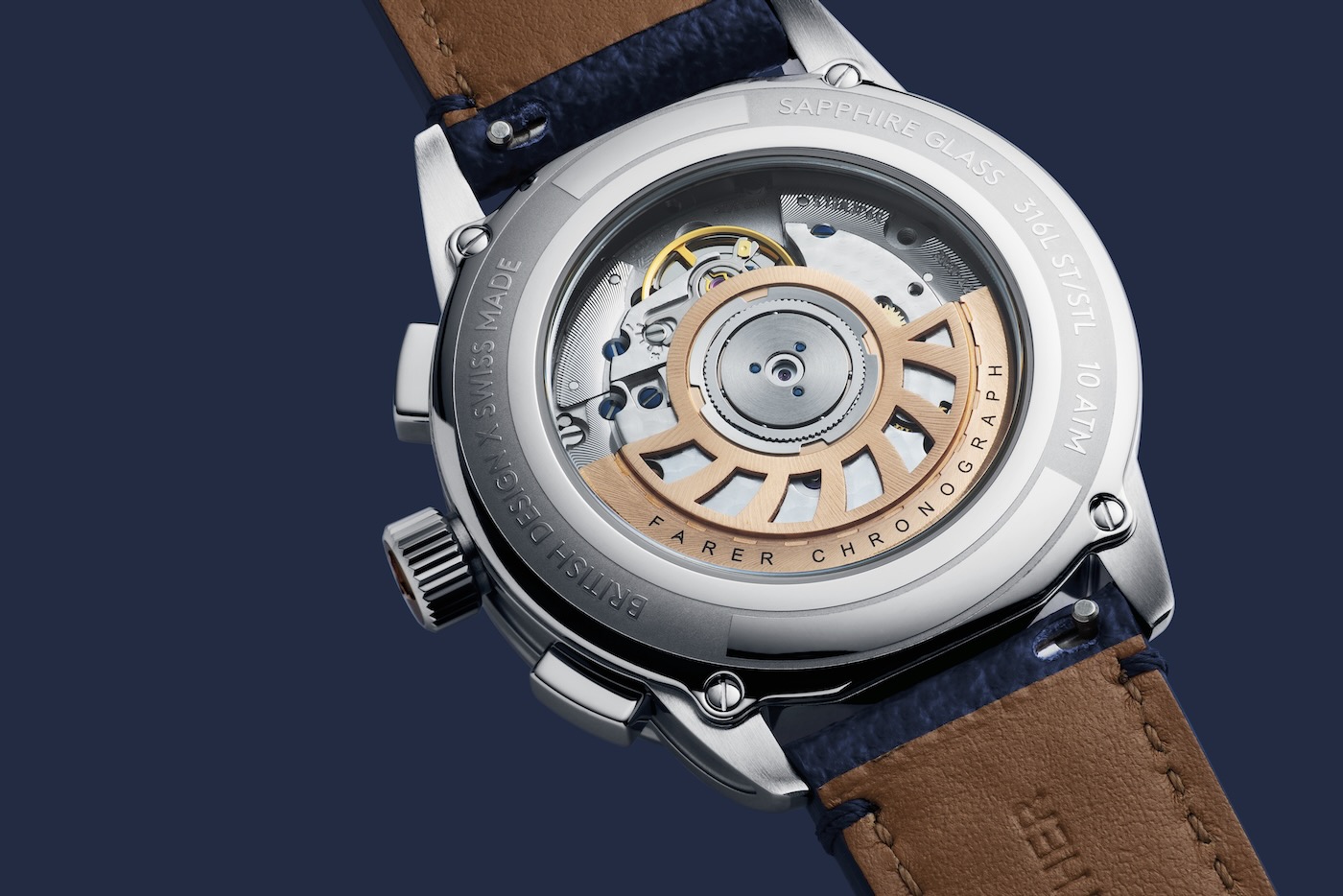 As usual for Farer, the colorways manage to be both playful and sophisticated, demonstrating the brand’s unique flair with the color wheel. However, the automatic movement powering the Chrono-Classic may be this model’s biggest talking point. For this release, Farer has turned to the highly regarded Swiss movement manufacturer, Dubois Dépraz, equipping these models with the DD2022 movement. At just 6.9mm-thick, the Dubois Dépraz movement is a big part of the reason Farer was able to retain a modest case thickness. With a power reserve of 45 hours, the Top Grade movement incorporates a 60-second chronograph with 30-minute counter and a quick-set date. 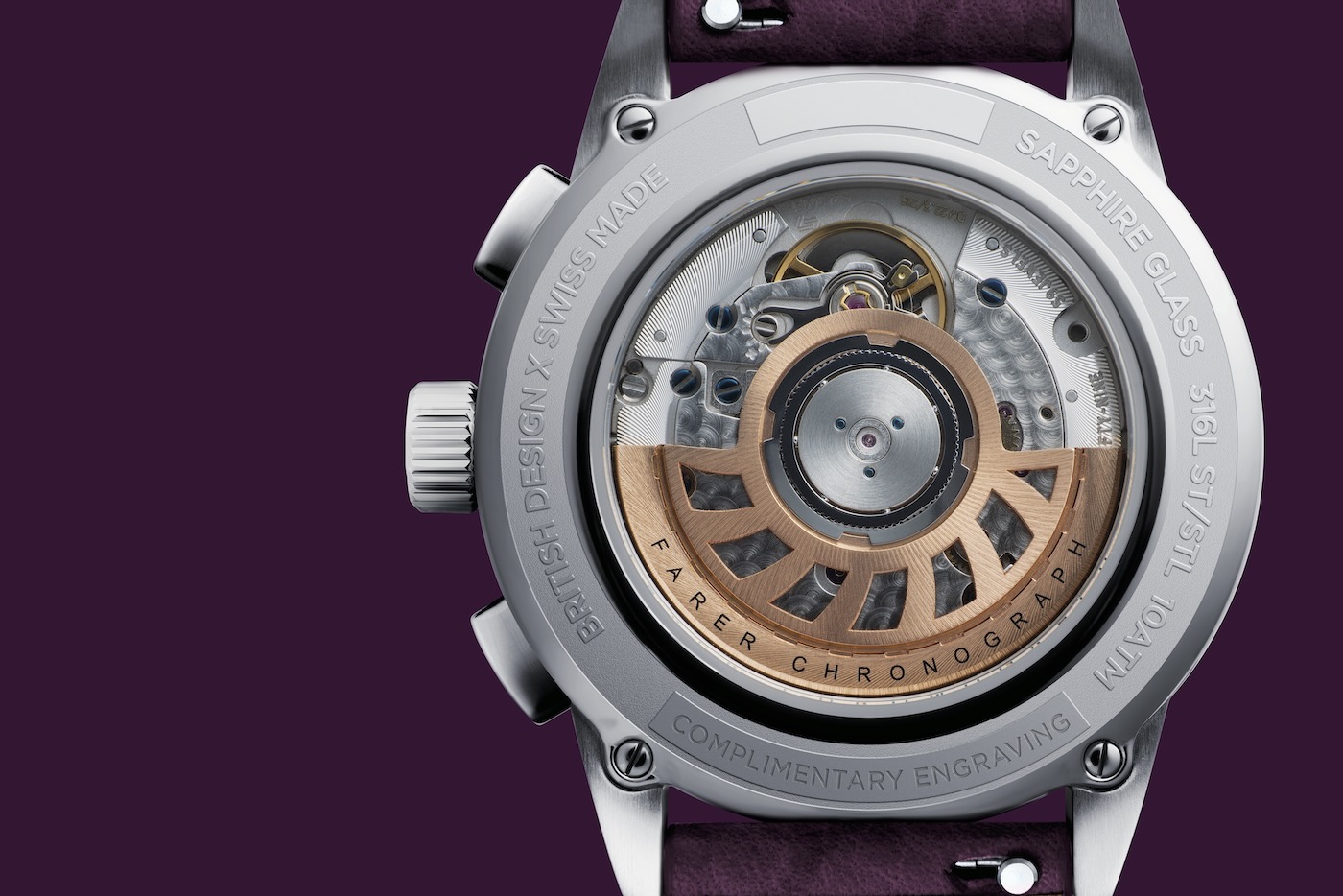 In addition to being a slim and reliable movement, the DD2022 also allows the crown to align centrally in the case using an offset rod. The fact that most chronographs don’t have pushers and crown perfectly align probably won’t bother most people, but having them aligned shows a welcome attention to detail. The movement is visible behind a sapphire exhibition caseback, which also shows off the custom bronze-colored turbine rotor. 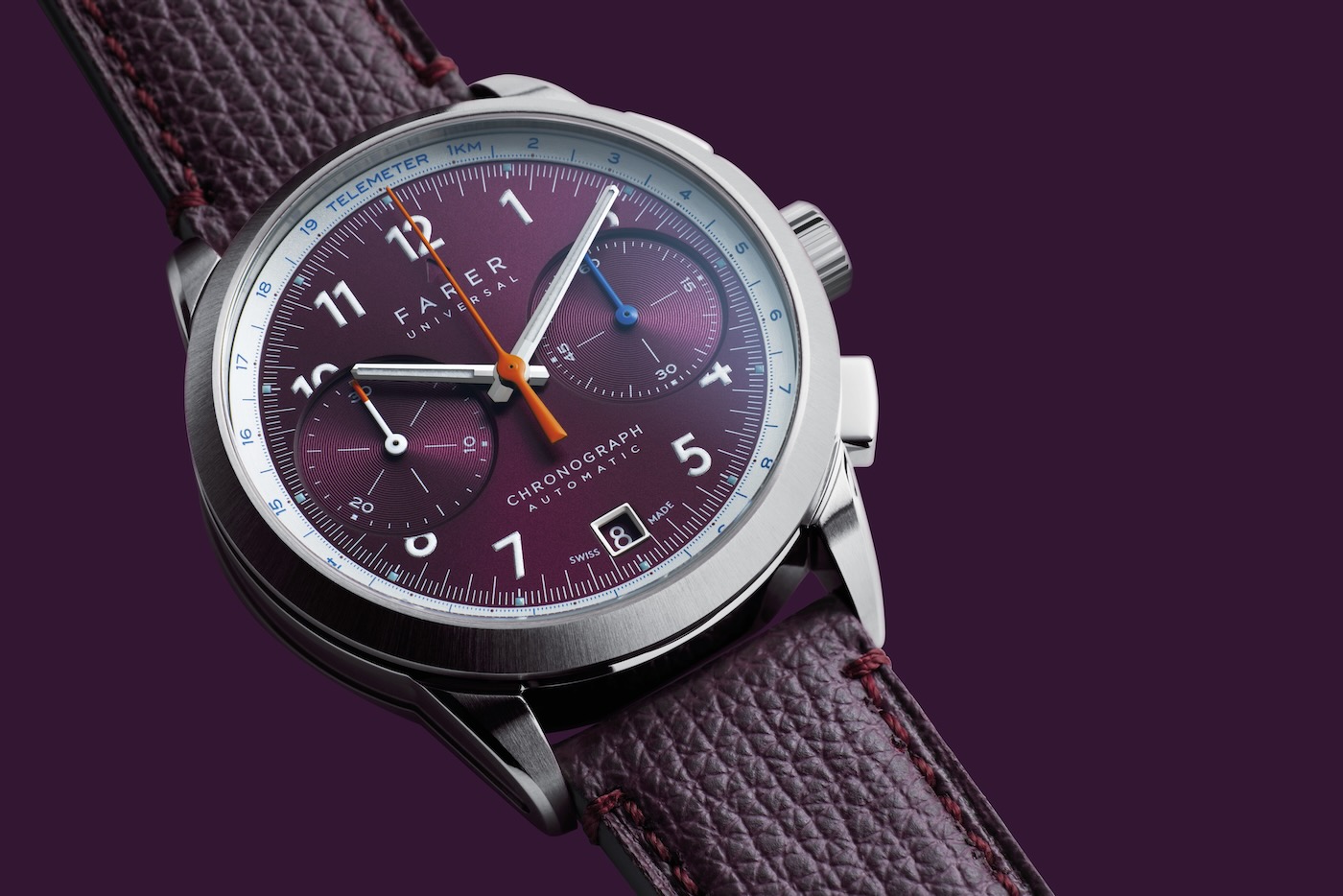 The Chrono-Classic marks a welcome return of a classic two-pusher, two-register chronograph to the lineup and does so with colorways that range from classic and versatile, like the blue-dialed Jackson and salmon-dialed Meredith, to wild and unexpected in the form of the deep magenta Swann. Perhaps the Swann marks the start of the new magenta dial trend of 2023? Hard to say, but that’s the colorway I can’t stop looking at and would love to see in person. The Farer Chrono-Classic is priced at $2,395 USD as of press time. For more information on Farer and the Chrono-Classic, please visit the brand’s website.