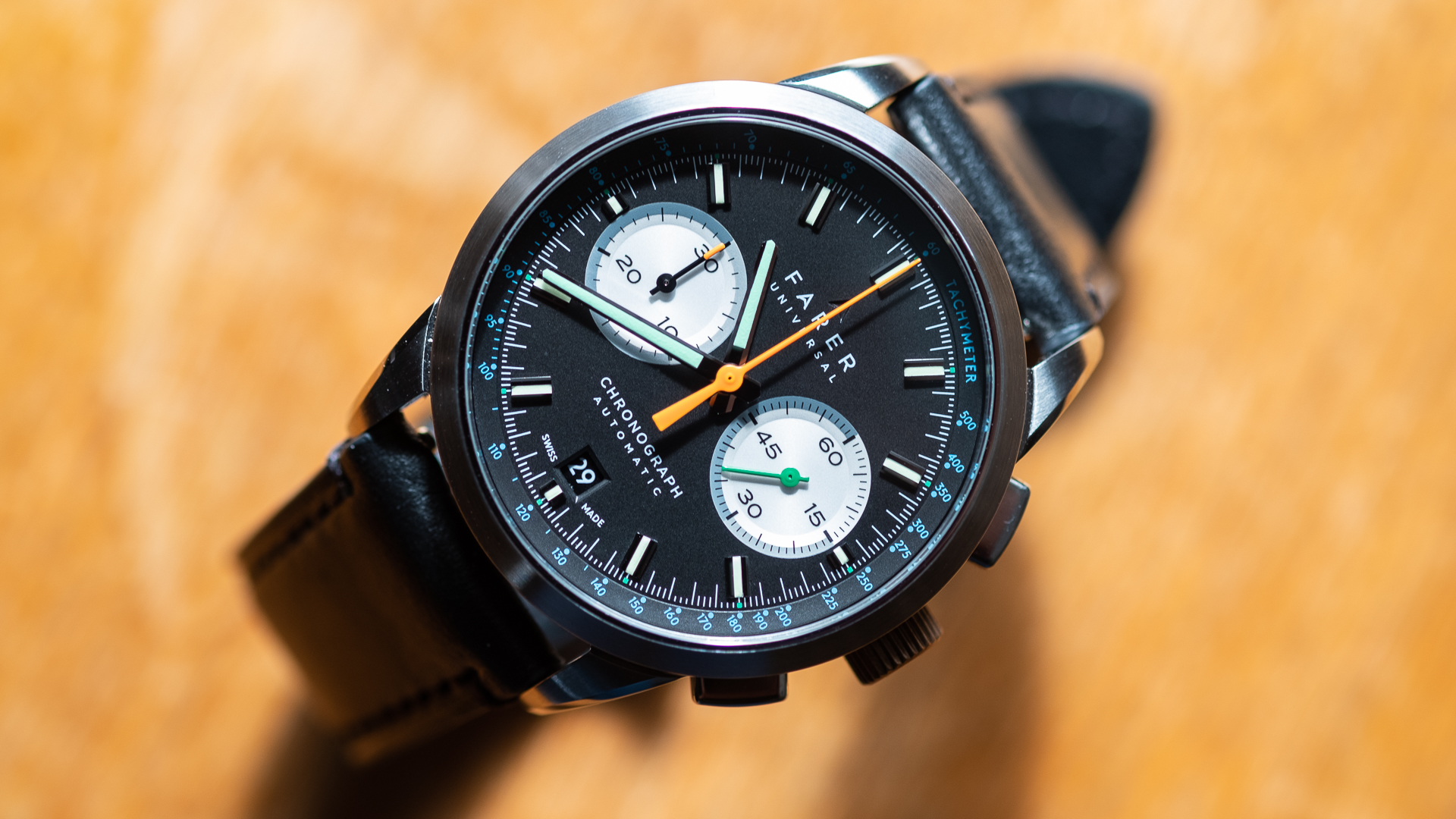 I believe that a major part of watch collecting is connecting with those that have gone before us. Either through wearing the watch that they did or by thematically connecting a watch to something that they achieved. This is done most notably by Omega with their moon watch, but this narrative is not unusual in the watch community. Farer, I believe, does a good job of creating a story around each of their watch releases and designing a watch that makes you believe it. This is true about the Farer Segrave, named after Henry Segrave, a British speed trial pioneer. 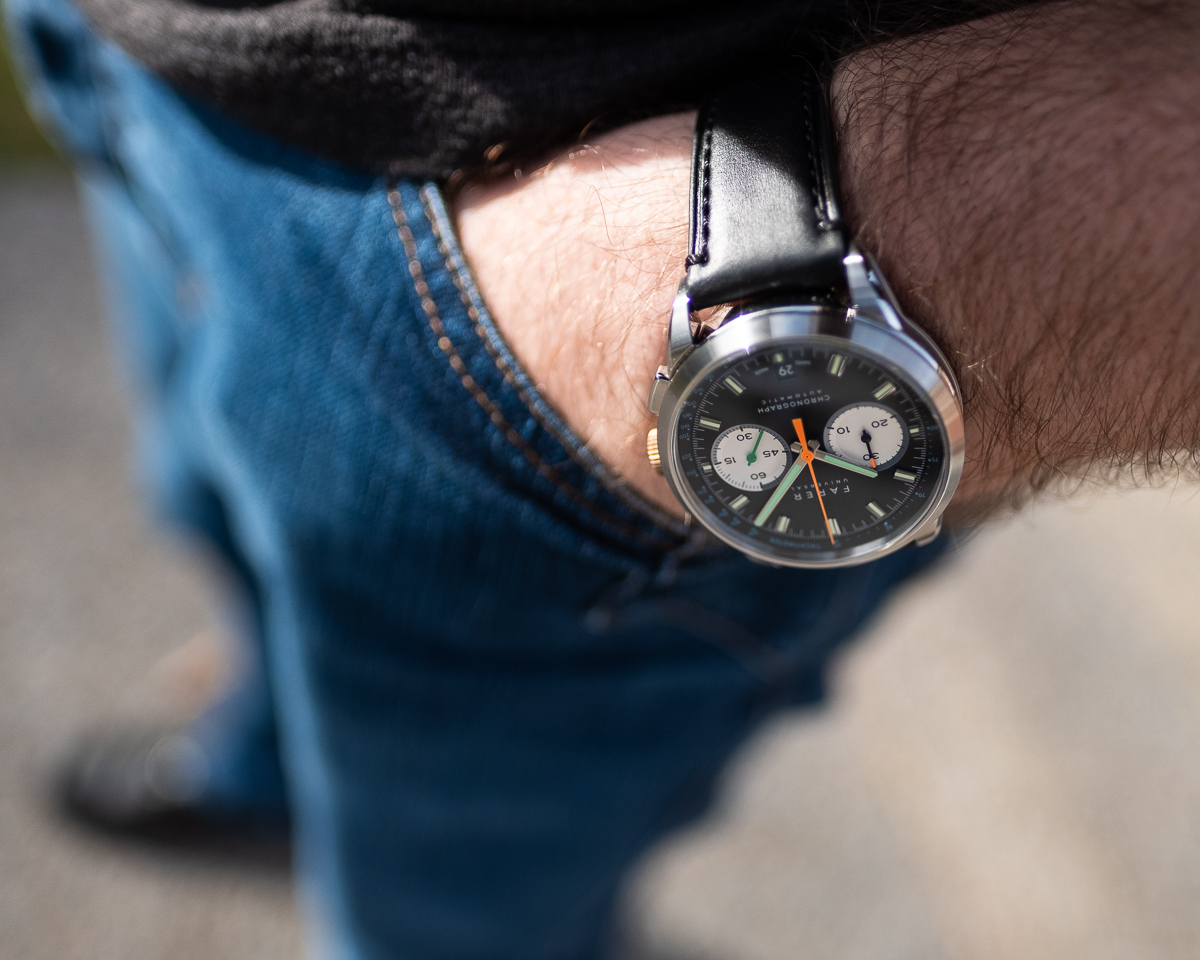 Segrave set both the land and water speed records and was the first person to hold both simultaneously. Now, it is highly unlikely that many of us will go on to, or ever aspire to, jump behind the wheel of an experimental car and watch the speedometer tick above 200mph on our way to setting our own record (a record which at the time of this writing sits at 763mph, set in 1997 by Andy Green of the RAF piloting the jet-powered Thrust SSC); however we can at least imbue a bit of our lives with some of that narrative… or at least try to. 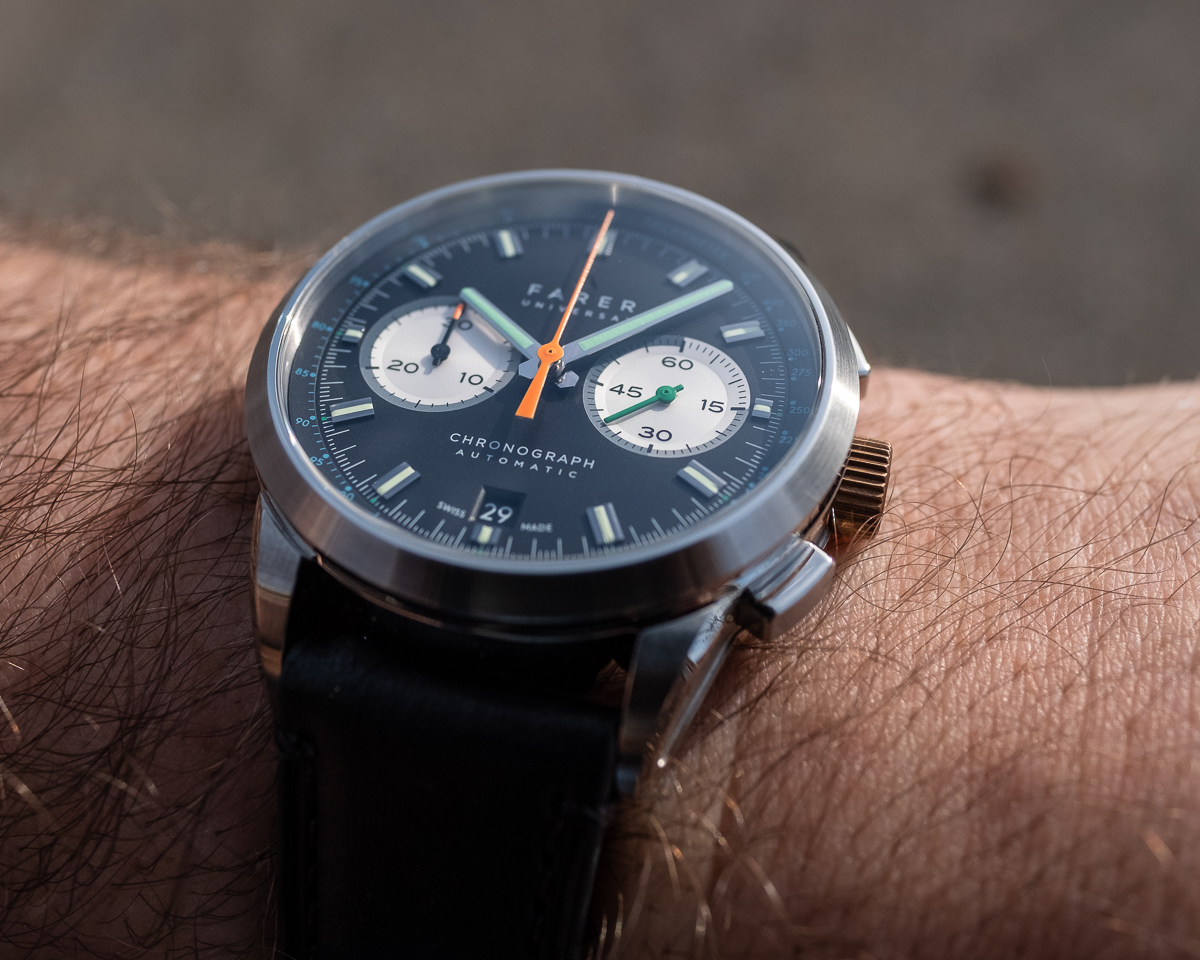 Farer, if you’ve never heard of it, is a UK-based independent watch brand. They first caught my eye with some of their GMT watches, specifically the Lander, but have consistently released well done if not quirky designs since. All of their watches have ties to a classic adventurer in one form or another. The Segrave’s sibling chronographs are both named after fellow land speed record setters Ernest Eldridge and John Cobb. It’s open to debate whether or not the “applied narrative” is needed for watches like these, but I’ll let that be a personal decision. Anyway, let’s get on with the review. 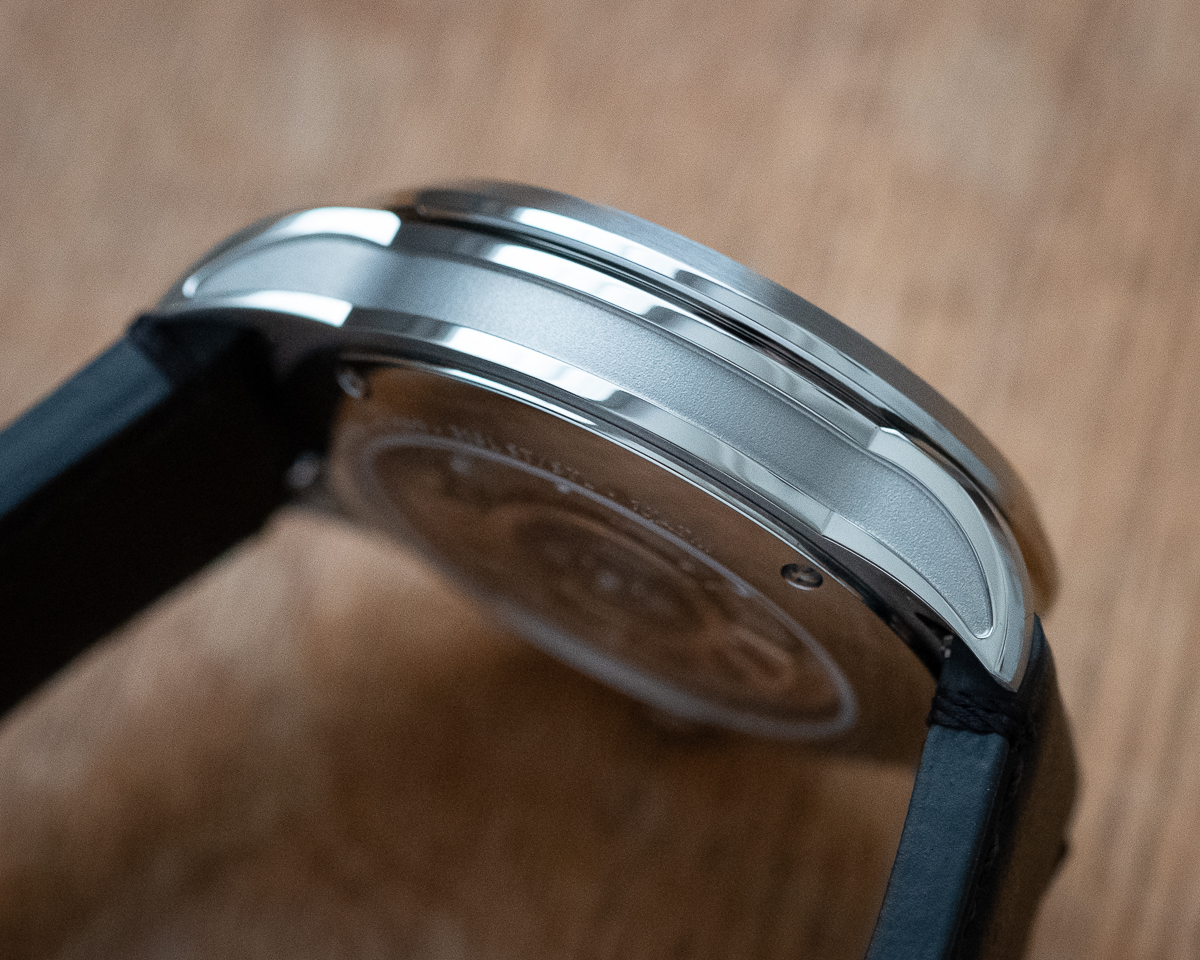 The Segrave’s case presents some really interesting flourishes that I don’t see often. The case has contrasting brushed and polished elements, but the case sides have cut-ins that are, as Farer puts it, “micro-blasted” to add a subtle, matted, pearlescent quality to them. This takes what would otherwise be a fairly slab-sided 13mm thick case, and creates a lot of interest where those slabs would otherwise be. The raised edges on the sides are polished, providing a stark contrast from the micro-blasted indents. 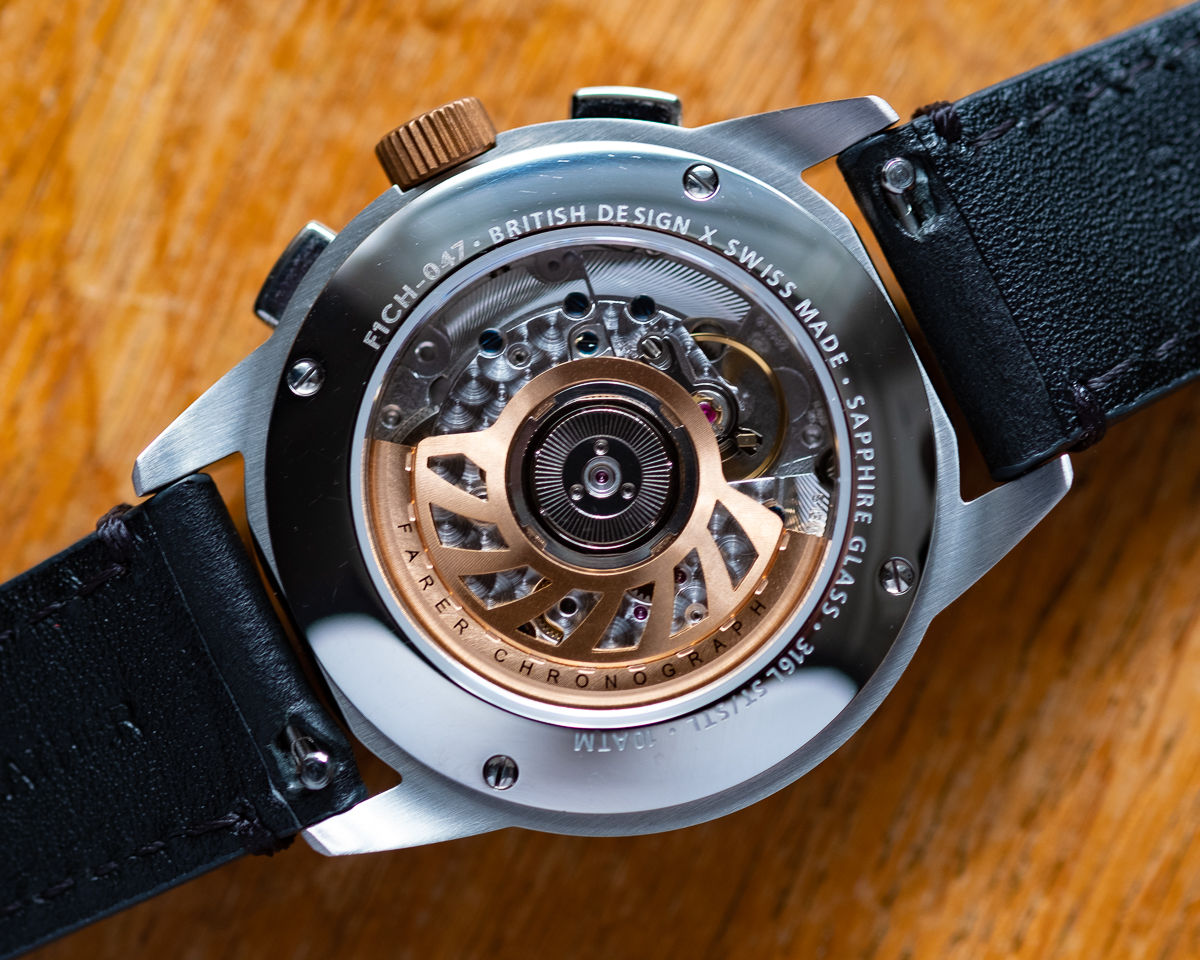 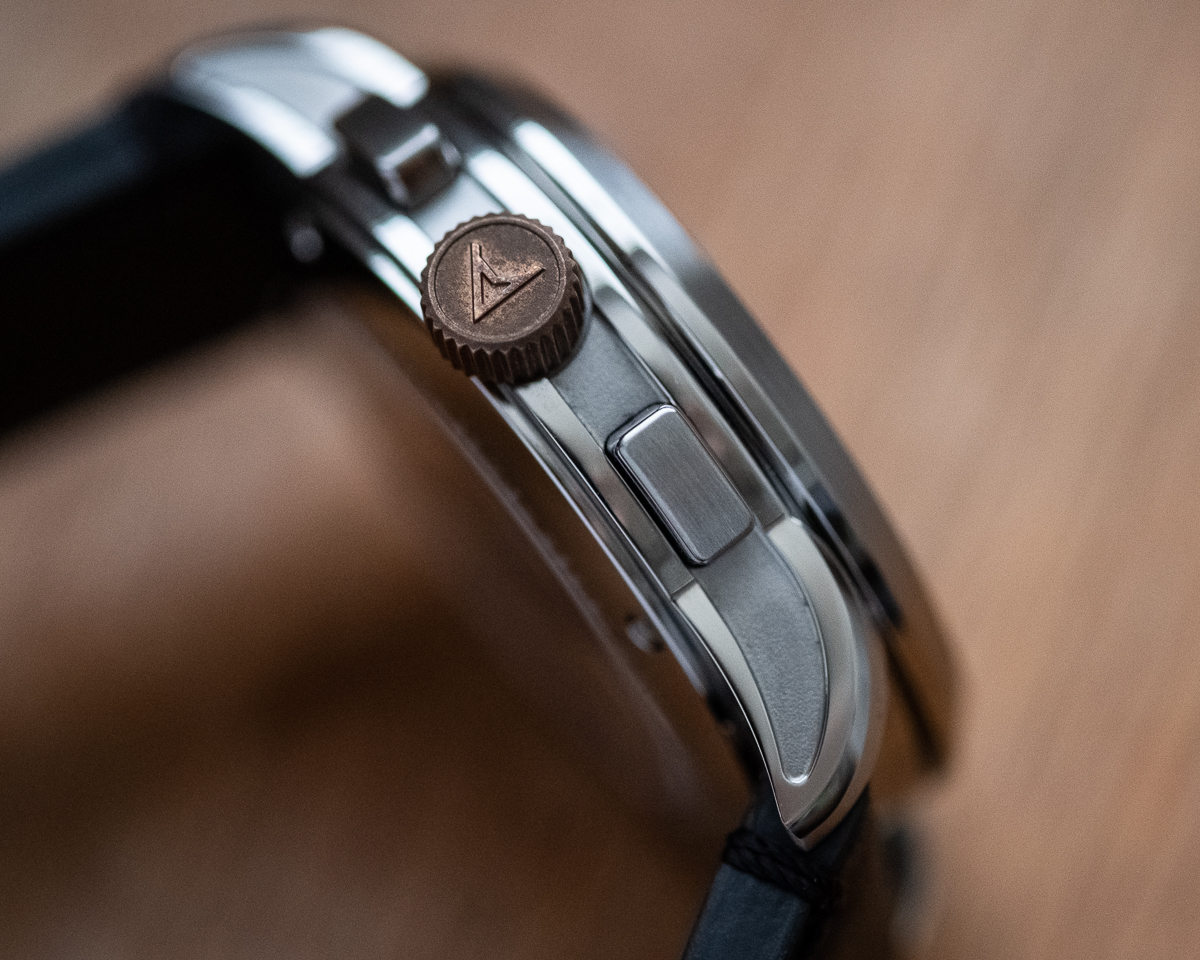 The bezel and tops of the lugs are nicely brushed, and the complimenting bevels are polished. Again, this is an interesting case that punches way above its price point. Flipping the watch over you’re treated to a screwed down display back featuring a nicely decorated movement and Farer’s signature bronze “turbine” crown (more on this later). The caseback itself is polished with the serial (also the unique watch #) and particulars printed around the sapphire window. One last thing I want to point out is Farer’s bronze crown. This particular feature seems to get very mixed reception among the folks I’ve shown the watch too. I like it. I like the idea that it will patina with time and be, if even slightly, unique to you. 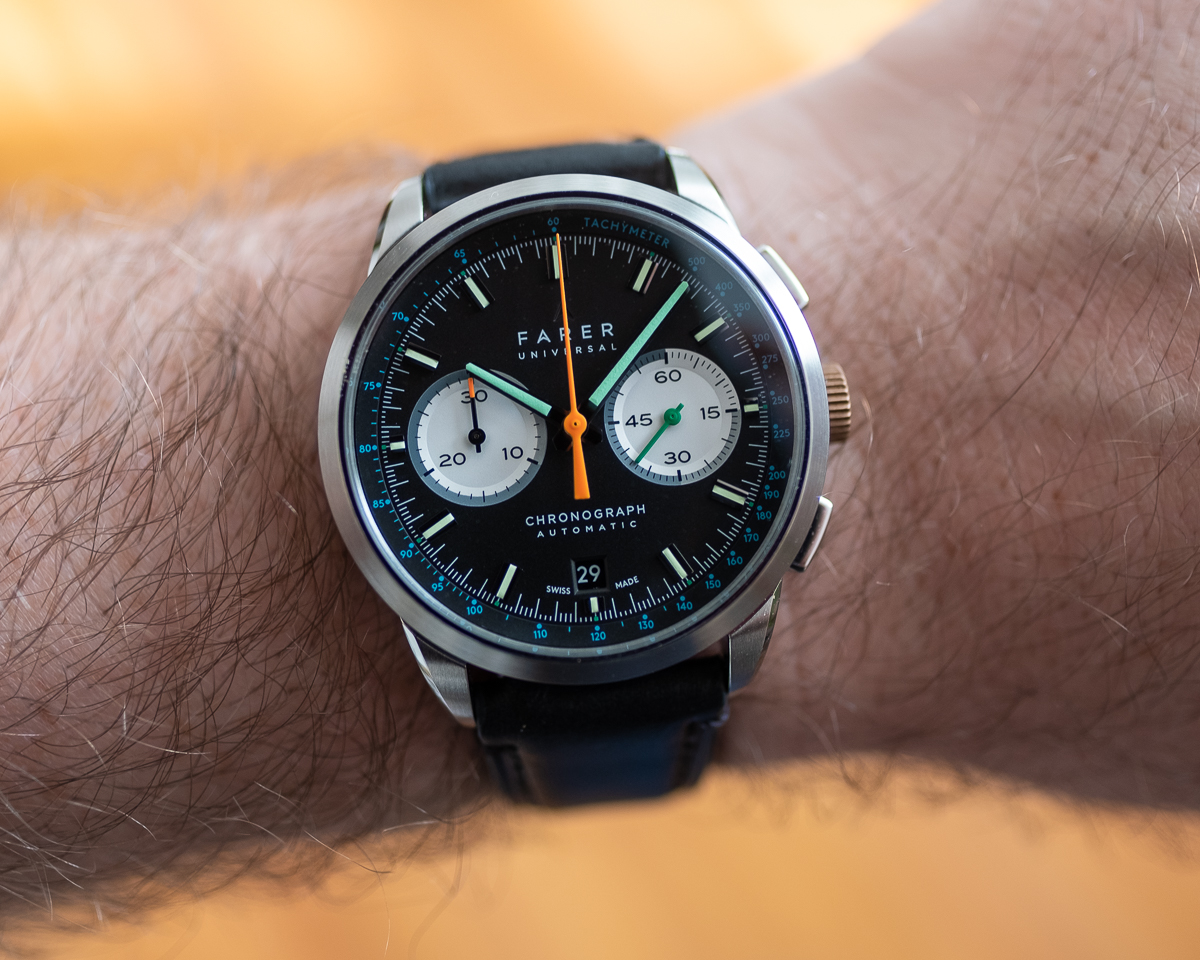 The Segrave’s dial is what separates it from Farer’s other chronograph offerings. Farer currently offers three watches with the same specifications, but different design elements. The Cobb, named after British racing motorist James Cobb, the Eldridge named after land speed record setter Ernest Eldridge, and the Segrave here. All three models are bi-compax dials with the date window set at six o’clock. The Segrave in particular features a matte black dial, and two silver recessed subdials. Following the simple white painted minute track are polished pairs of applied indices with stripes of lume separating them. Printed on the chapter ring in blue you can see the tachymeter. 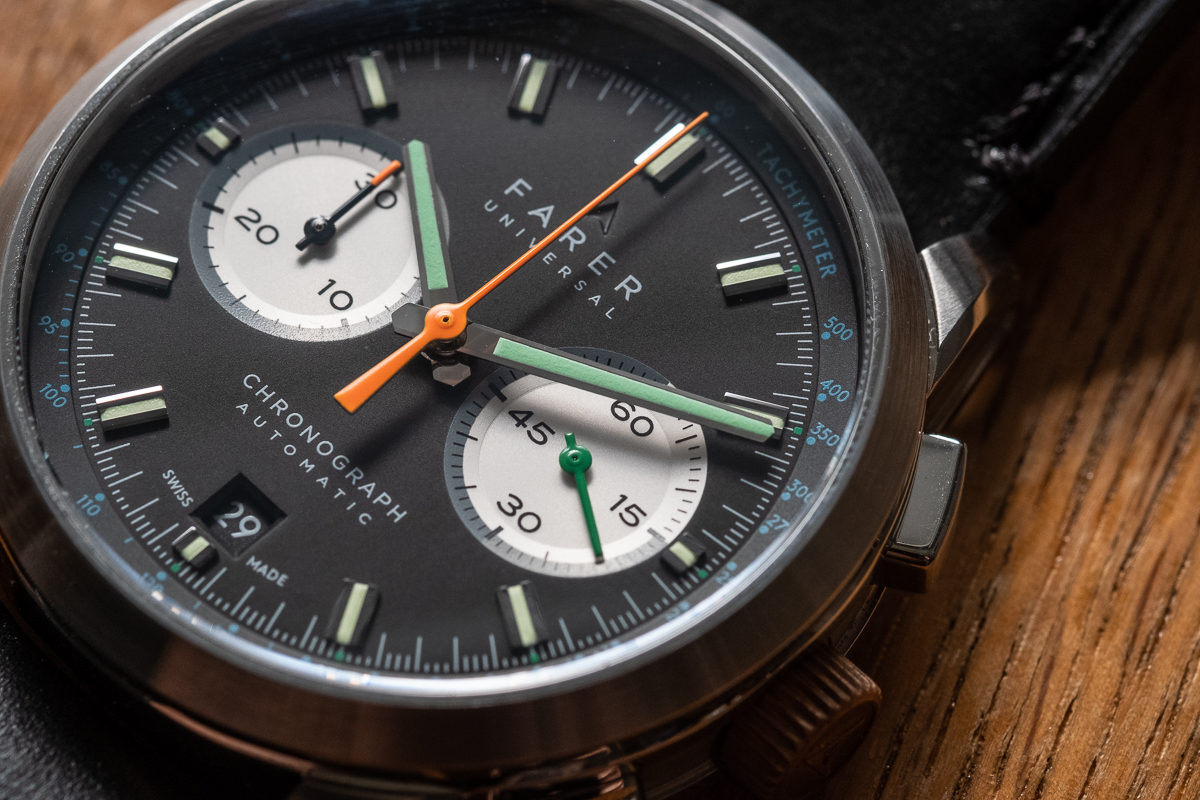 The stars of the show, however, are the handsets. Farer did a great job in first choosing the colors they were going to use and then with the application of those colors. The hands look almost as if they are coated in a candy shell. The paint is highly reflective and lustrous in particular on the Chronograph seconds hand and the two sub-dial hand tips. Finally, the hour and minute hands are in polished steel with large plots of the craziest neon lime green lume. That being said the actual lume brightness is lackluster at best with the hands glowing green and the indices glowing what I can only call a “pale grey.” 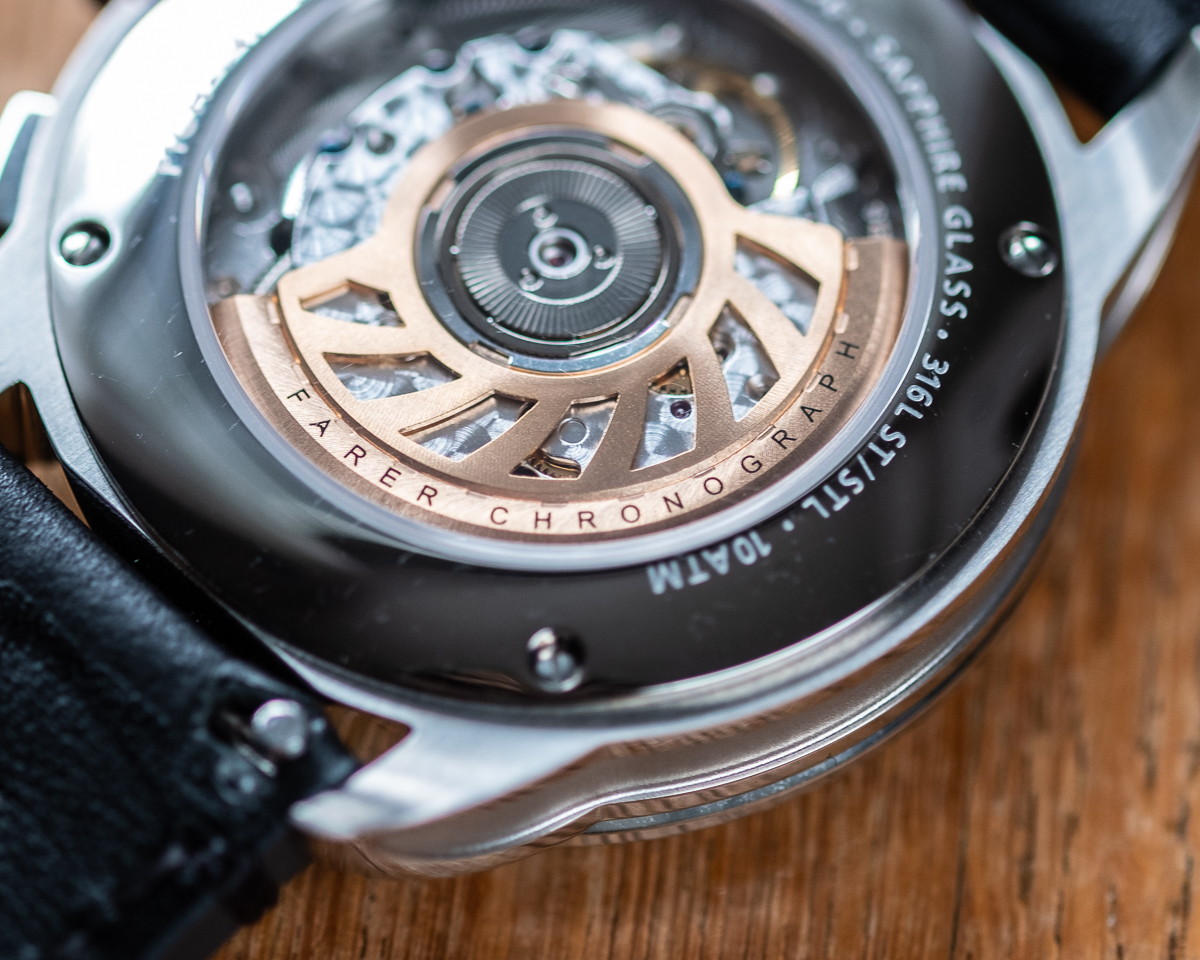 Farer has chosen to use the ETA 2894-2 “Elaboré” grade chronograph movement. This movement ticks away at 4Hz, has a 42-hour power reserve, offers a date at 6 o’clock, and 30-minute counter subdial as well as a ticking seconds subdial. For those who aren’t familiar with the 2894, it is not Valjoux based, but a “modular” chronograph based around ETA’s thinner 2892.

Farer chose to go the extra mile on their chronograph line and included a beautifully decorated movement with some classy engine turning and blued screws. The star of the show, however, is Farer’s bronze “turbine” style bespoke rotor, which matches the crown well (pre-patina) and gives the display back a nice pop of color when you look at it. 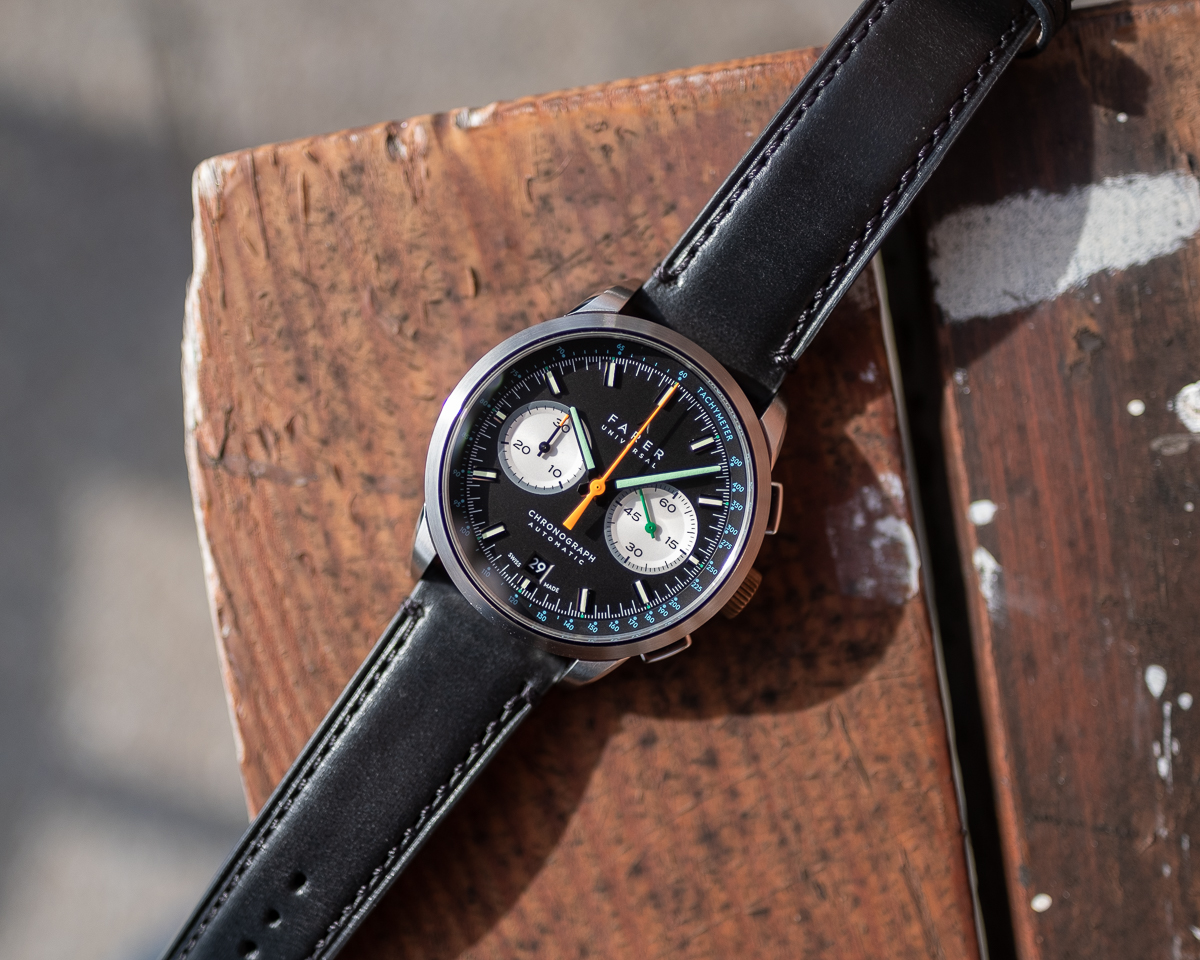 The strap included with the Segrave is a black leather strap featuring a signed buckle. All of the Farer straps that I have encountered are “quick release,” meaning that they have the visible tabs to remove the spring bars. The straps themselves are adequate if unremarkable. They arrive fairly stiff but quickly break in with some normal wear. The buckle is a nice touch with a large 3D Farer logo and brushed surfaces to match the case. 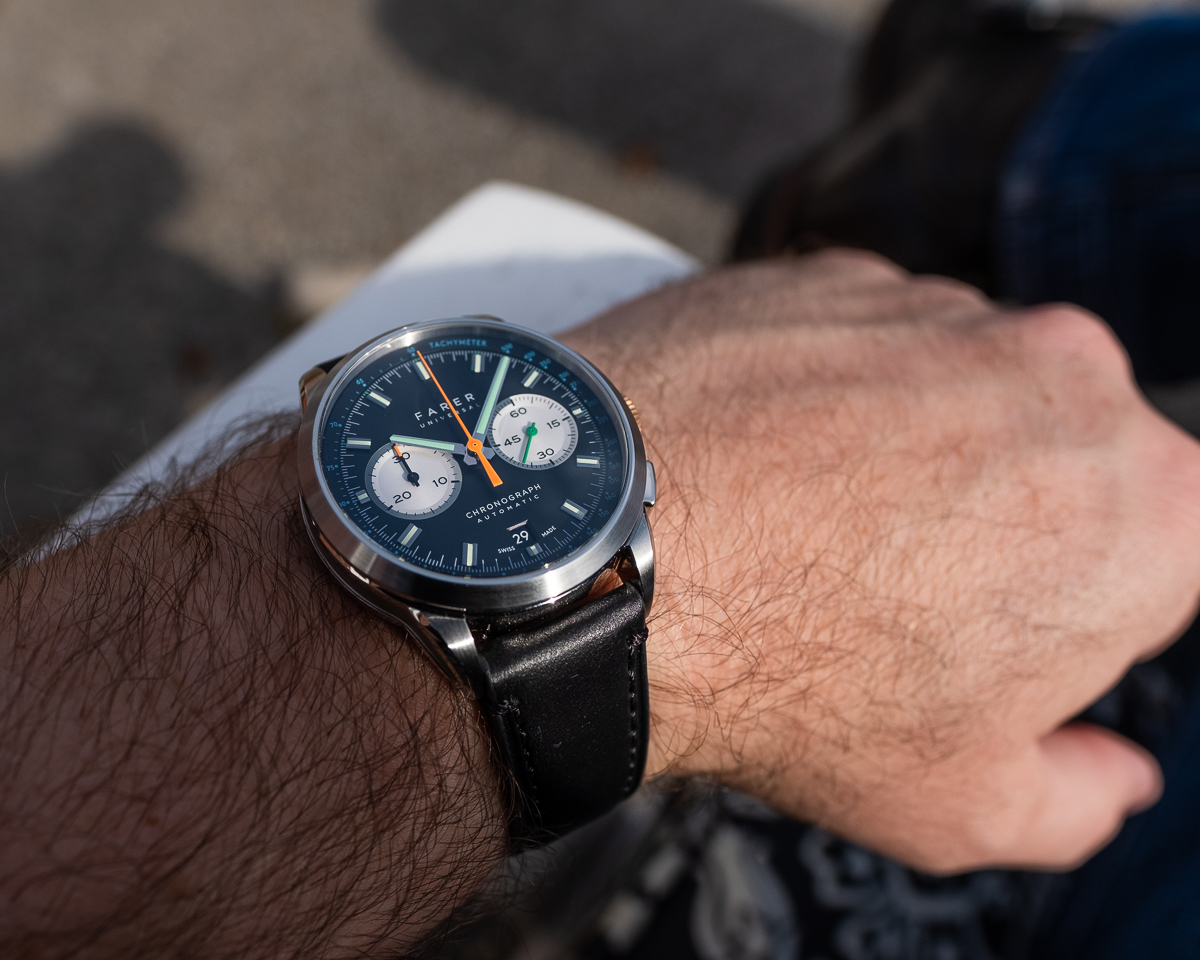 When it’s all said and done, the Farer Segrave is something to consider if you’re in the market for a chronograph, especially in the independent watch brand space. The amount of progress independent designers have made in the last couple of years is remarkable and I count Farer among that collection. This is to say, it continues to make our decision process tougher when thinking about the next piece to pick up. 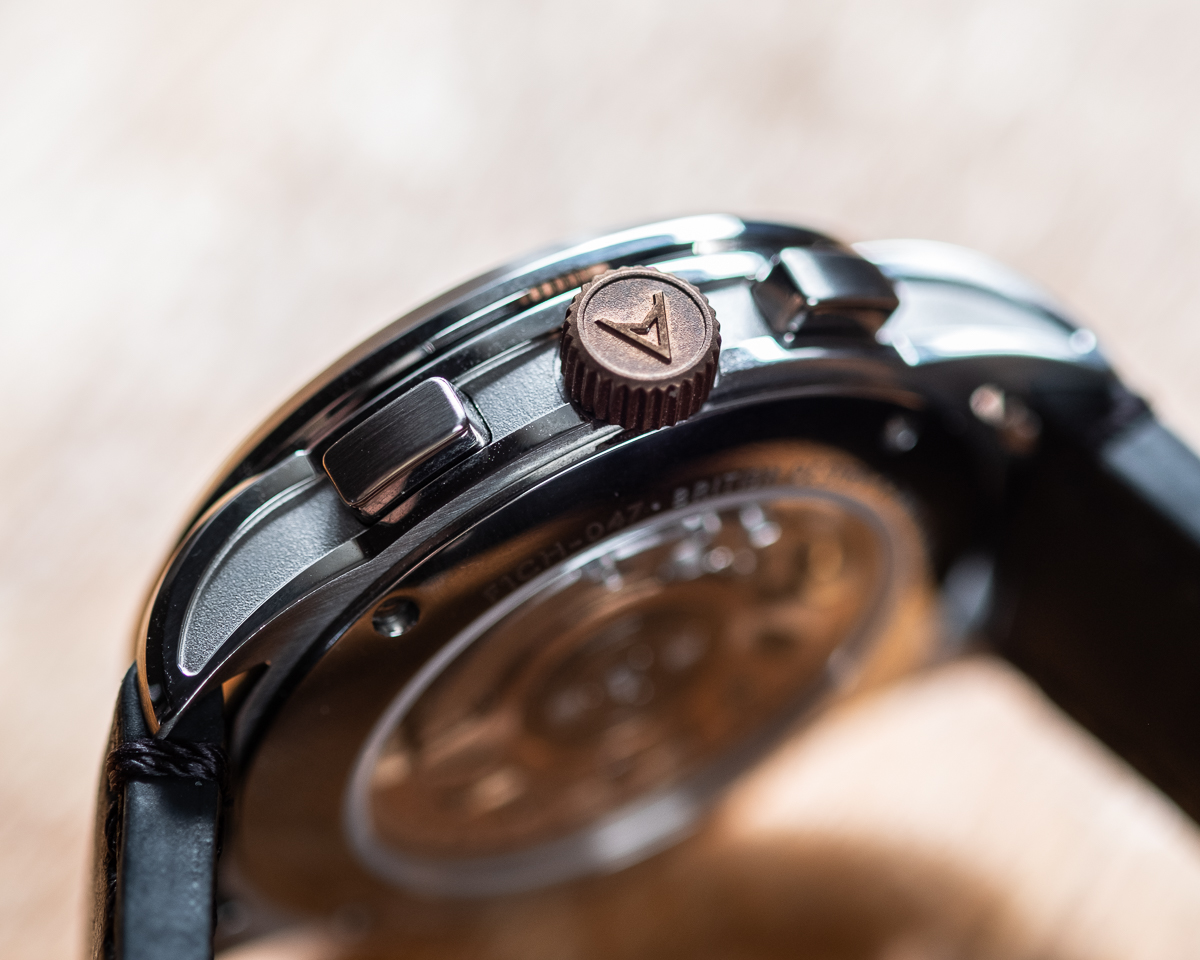 When I began to brainstorm competitive options I started finding myself thinking of watches that were at least $600 more. The Longines Avigation Big Eye would be a great competitor to the Segrave, however, it’s priced at $2,626. Oak and Oscar recently released their Jackson Flyback Chronograph at $2,850. The Hamilton Intra Matic 68 is also a great piece to consider. Priced at $2,195 it comes in just over the Farer offerings but is somewhat plain by comparison. 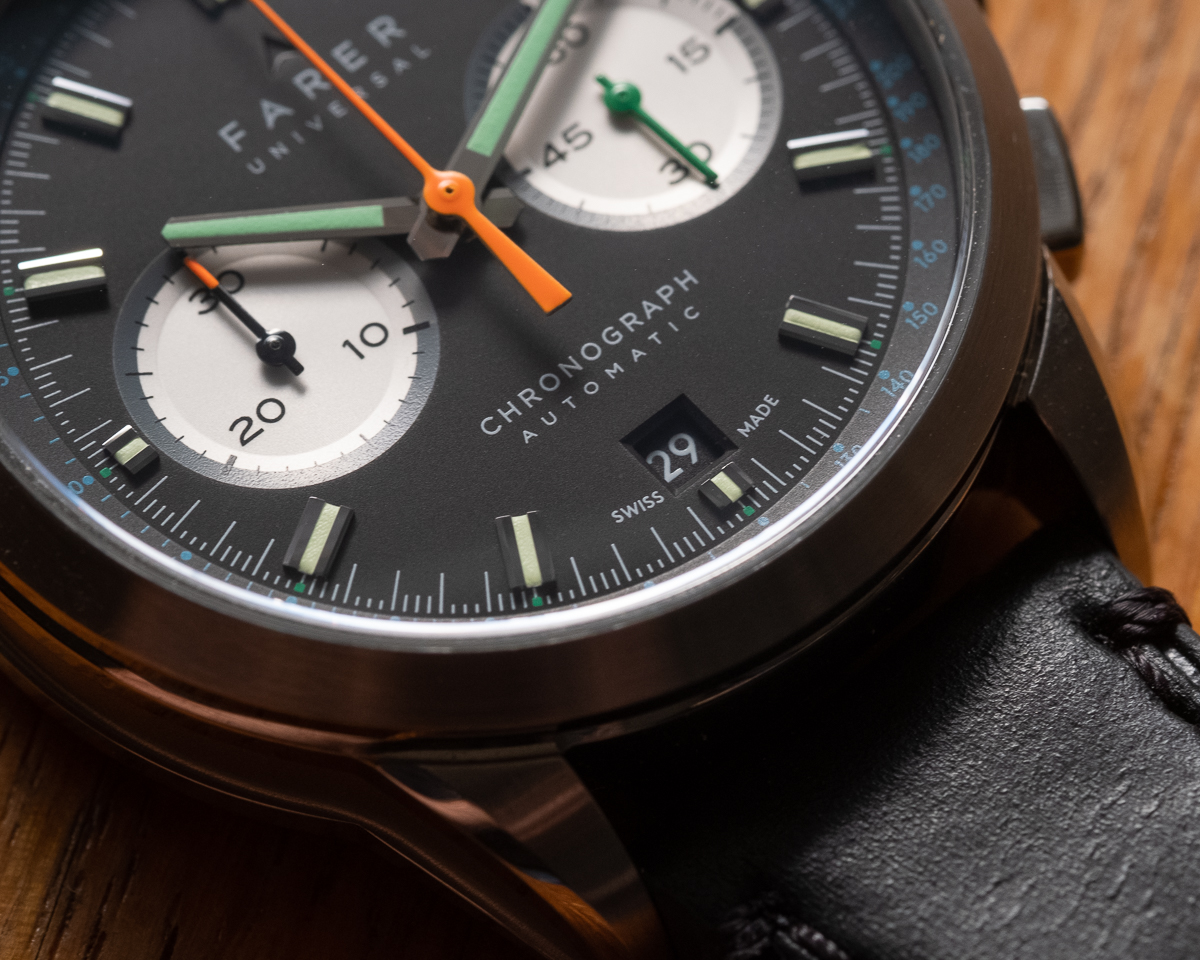 What this illustrates to me is that the Segrave and its peers offer you a lot of functionality, for not a lot of money. If I could change anything I’d want the lume to be a little more geared towards use instead of aesthetic, but that’s really it. Farer executed some really intricate casework and design elements on these pieces that really make them stand out from the crowd in a landscape of vintage-inspired chronographs. The Farer Segrave is available for $1,950. For more information see farer.com.

Necessary Data
>Brand: Farer
>Model: Segrave
>Price: $1,950
>Size: 39mm
>Would reviewer personally wear it: Yes.
>Friend we’d recommend it to first: Anyone that’s looking for a chronograph in the sub-$2,500 range.
>Best characteristic of watch: Attention to detail on the case finishing.
>Worst characteristic of watch: I would personally have preferred a non-modular movement.