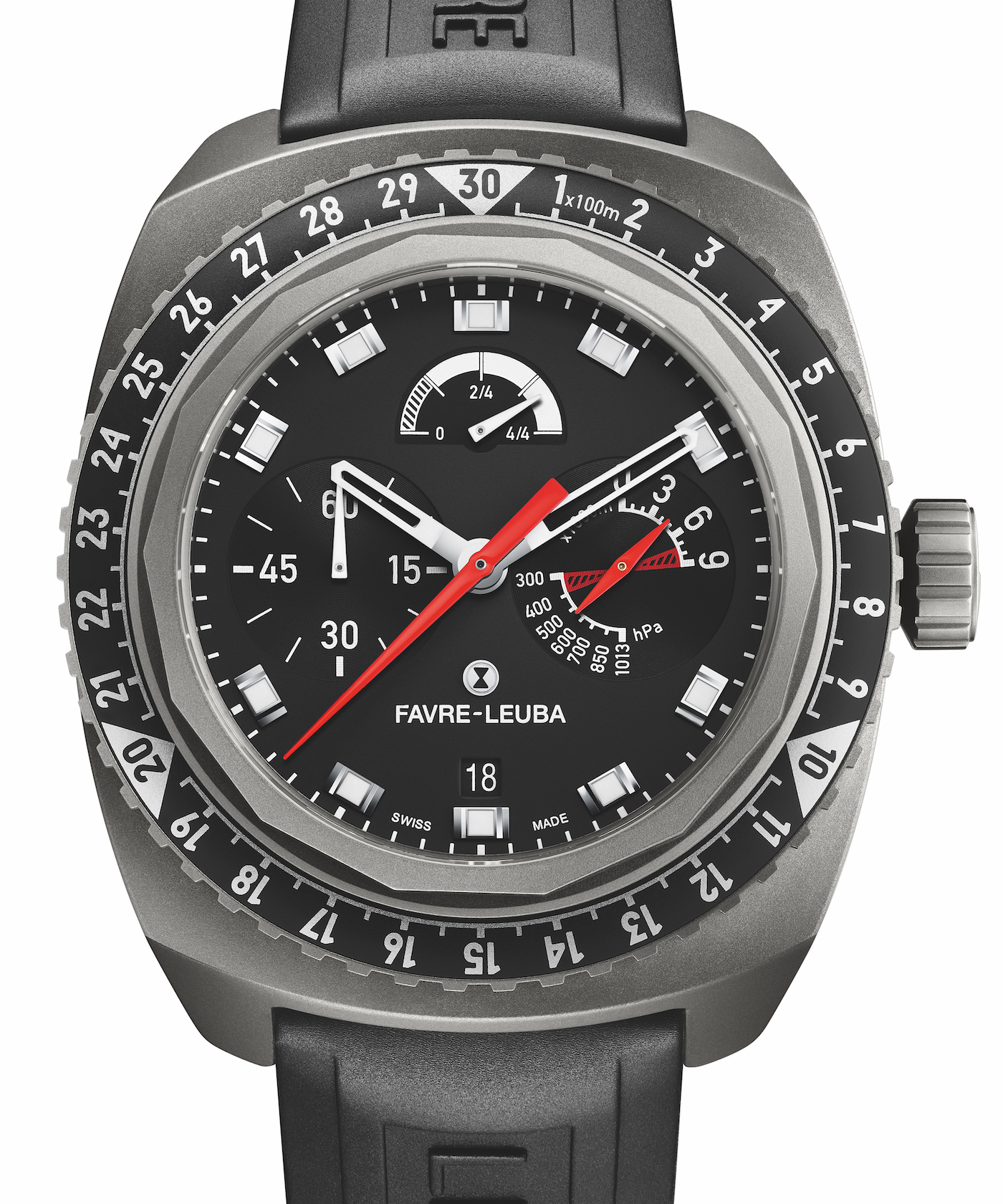 Favre-Leuba is a hard brand to get a handle on. Believe it or not, this is Switzerland’s second-oldest watch brand (behind Blancpain). While that might be true in terms of original foundation date (1737 versus Blancpain’s 1735), it doesn’t have quite as much bearing on the company’s heritage, given its discontinuous operation. After a few years of complete inactivity, the storied brand was purchased by the Tata Group in 2011. Five years later, in 2016, a totally new collection debuted.

Ever since, the brand has been trying to recapture past glories by introducing a new (massive) case profile and interesting complications that have a practical application in the natural world. The Favre-Leuba Raider Bivouac 9000 Black Edition watch is a chromatic update to the titanium-cased version released five months ago. Just like that model, the Raider Bivouac 9000 is – quite remarkably – able to indicate the current altitude all the way up to 9,000 meters. A rare feat, indeed, for a purely mechanical watch.

The Case and Strap

For such an ancient brand, the styling of the modern Favre-Leuba range is anything but. The Bivouac has a huge case, measuring 48mm in diameter. That wrist presence is further enhanced by the elongated cushion-shaped body. One small saving grace in terms of wearability is the decision to use stubbier drop-down lugs to reduce the overall length of the watch on the wrist.

The Favre-Leuba Raider Bivouac 9000 Black Edition comes with a couple of strap options. Both are well chosen and suit the watch, as well as its intended use. To the latter point, I would prefer the rubber strap. I have quite a fondness for molded rubber straps. Despite my aesthetic bias, this watch is made for high altitude, potentially inclement conditions, and rubber seems the perfect choice.

For such an imposing case, this watch and its range-mates wear surprisingly well. This is likely down to the unapologetically utilitarian nature of the watch. Far from an elegant beast, the Favre-Leuba Raider Bivouac 9000 Black Edition is designed to be used in extreme conditions.

Although it makes sense when you think about how sensitive the movement needs to be to atmospheric changes in order to work, the water resistance is a paltry 30m. Although it is a necessity, it does seem somewhat incongruous for such a tough-looking watch designed for the great outdoors.

The strap features Recco technology, which enables the watch (and hopefully, its wearer) to be located. This is particularly useful in the aftermath of an avalanche, but it could be used to find a missing person, regardless of the circumstances. The tracking technology is often featured in the lining of mountaineering and hiking jackets and it’s a really neat addition to the design. 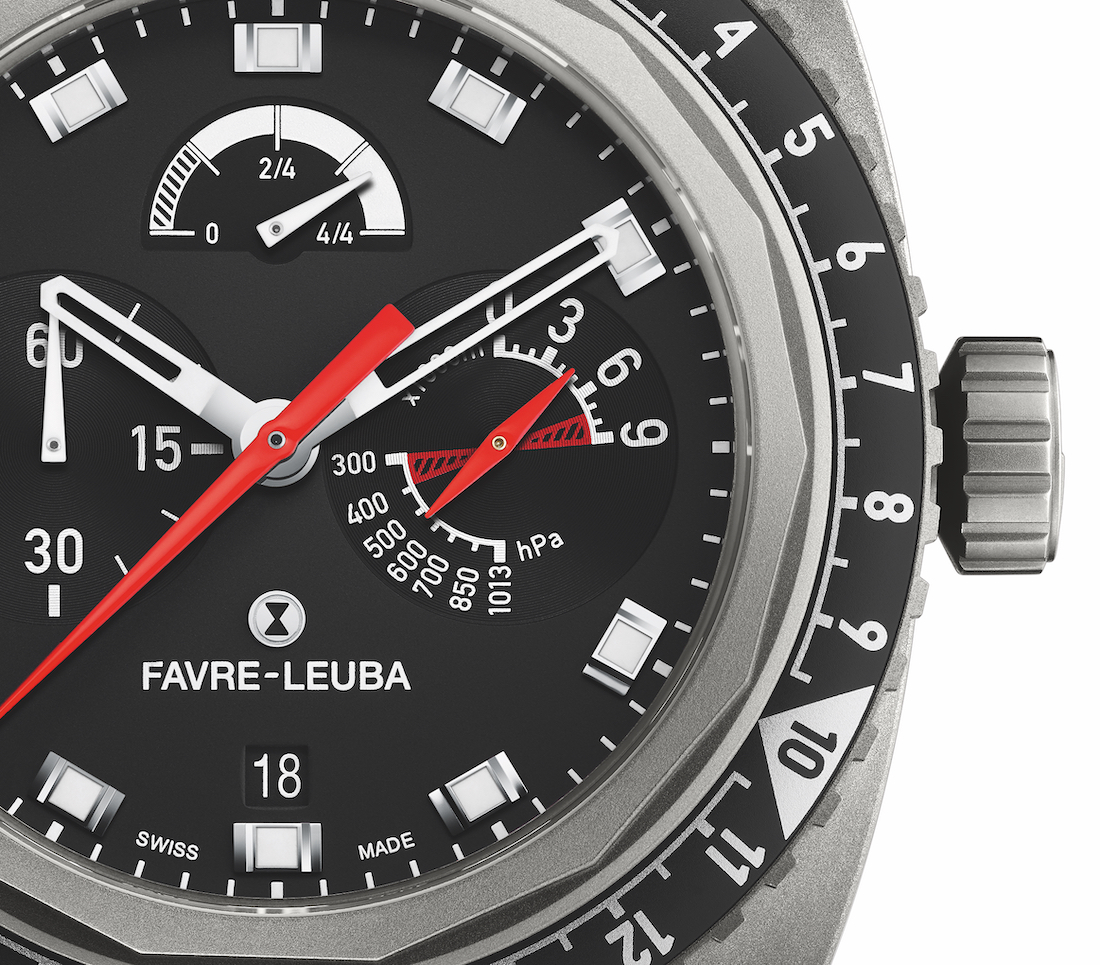 The matte-black dial is incredibly legible. Decorated with pure white print, the Bivouac uses red to separate the altimeter functionality from the time. The central red hand indicates the altitude in 100-meter increments by way of the unusual bezel graduations. One full rotation of the seconds hand equates to an ascent of 3,000 meters, which is tallied up on the 3 o’clock sub-dial.

At 3 o’clock, the sub-dial indicates the altitude in 1,000-meter increments using the first quadrant, while the third quadrant shows you the corresponding air pressure. It’s a remarkably tidy display and a wonderfully interesting complication. My only skepticism was its reliability. However, this mechanism has been tested to the nth degree. It has even summited Everest on the wrist of famous American mountaineer Adrian Ballinger, who gave the watch a sterling review.

Furthermore, Favre-Leuba does have previous experience with this kind of technology. The Favre-Leuba Raider Bathy 120 MemoDepth watch uses similar technology to show depth, instead.

The Favre-Leuba Raider Bivouac 9000 Black Edition is powered by a hand-wound movement with a 65-hour power reserve. Functionality includes hours, minutes, seconds, a power-reserve indicator, as well as the mechanical altimeter. 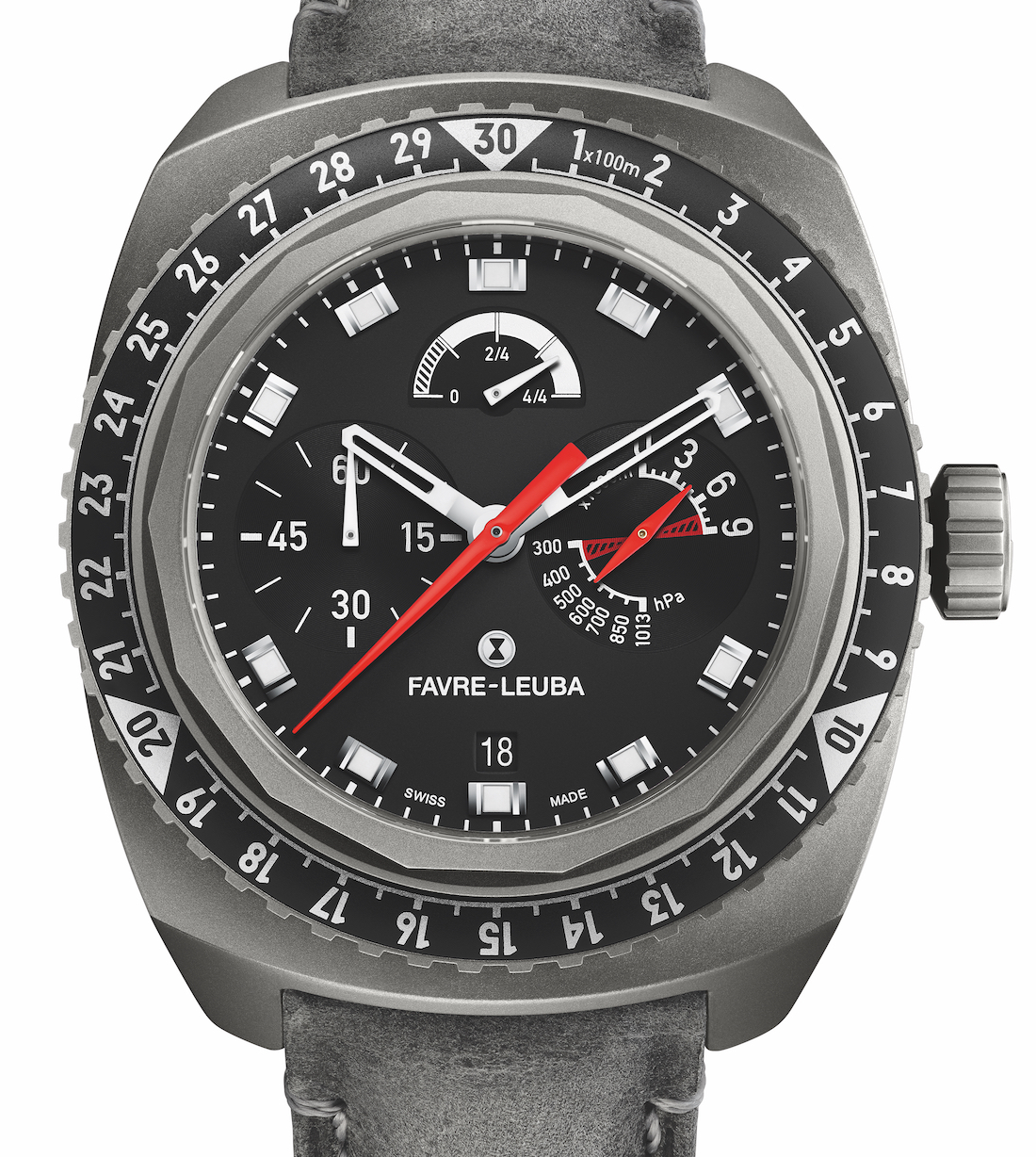 Ultimately, this release adds nothing more than a new color option to an existing model. However, the concept is so intriguing and so unusual for its mechanical altimeter that I feel it deserves a bit more time in the sun. I’ve never worn a Favre-Leuba for any length of time, but when I have encountered them in the wild I’ve found them robust, well-made pieces, clearly designed with a keen eye for detail. The execution of this renaissance project is of a laudably high standard.

My question for the brand’s future regards how it will gain traction in an already saturated marketplace when the asking price is rivaling some pretty tasty names in the sports-watch field. The Favre-Leuba Raider Bivouac 9000 Black Edition will retail for CHF 7,500. As much as I like this watch I must say it is a steep price to scale, even for the mountaineers for whom it was created. Visit favre-leuba.com to learn more.