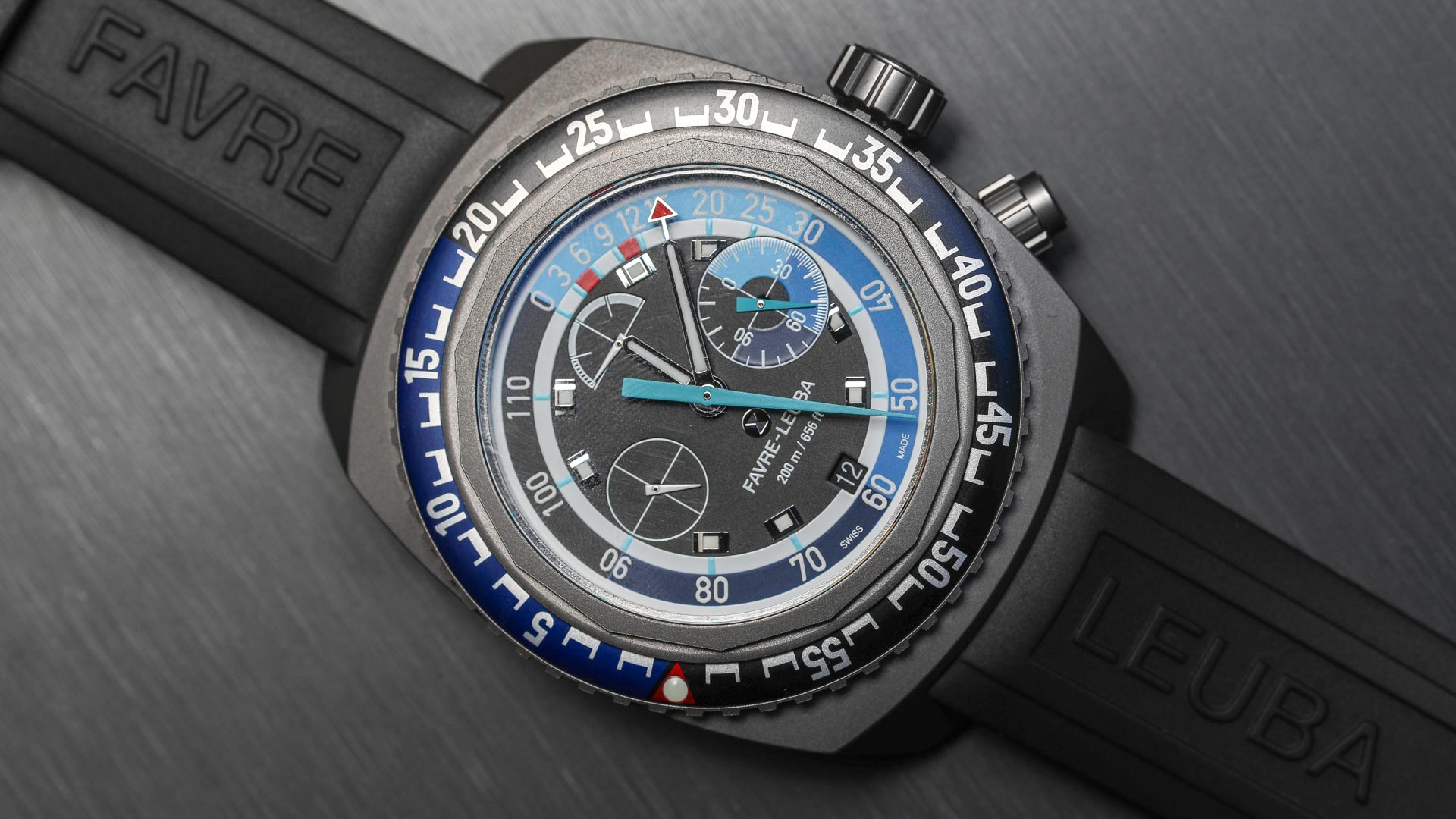 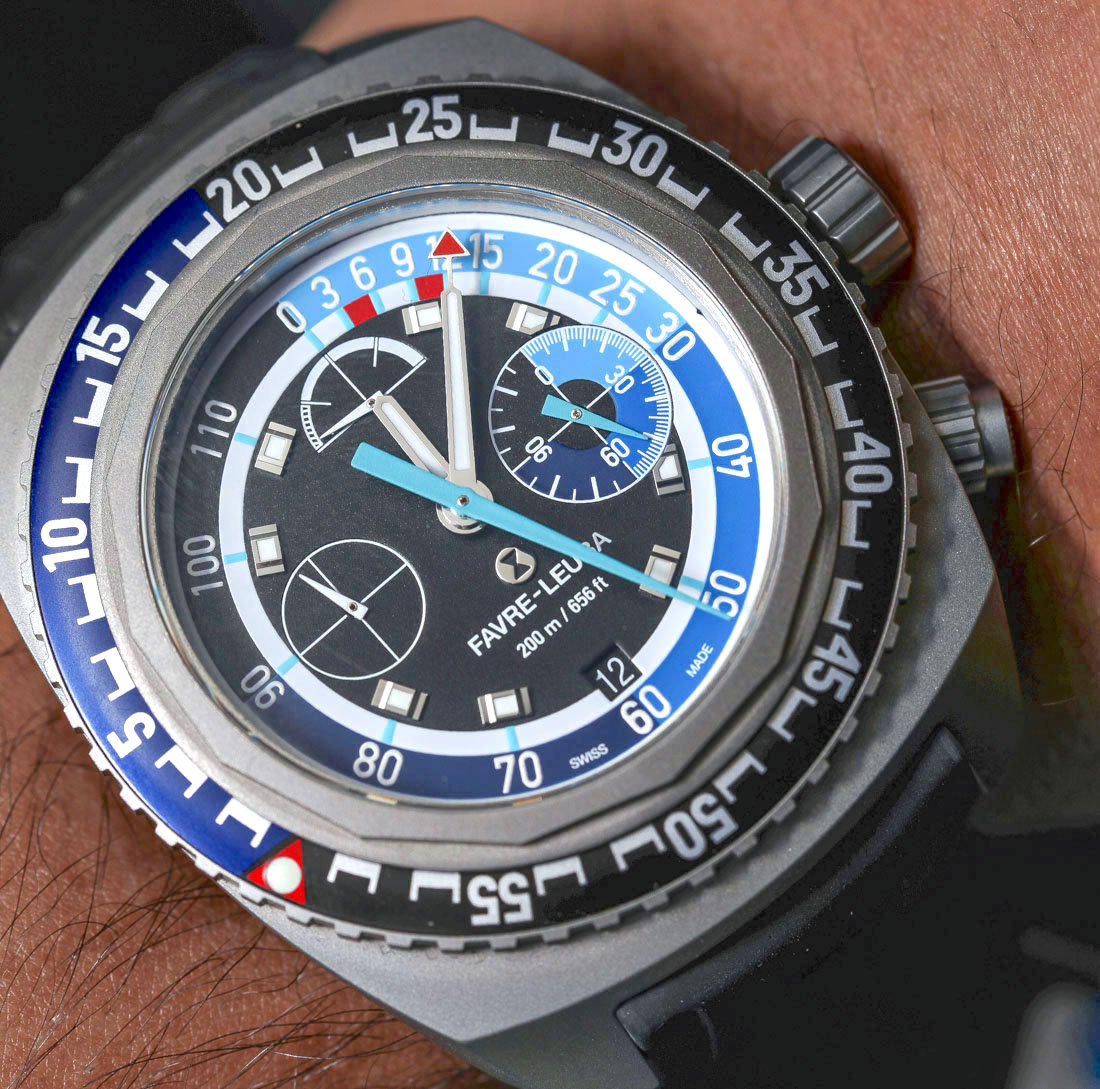 You could almost count on one hand the number of mechanical depth gauges available to dive watch fans (or actual divers), and they run the gamut from relatively affordable and comfortable, like the Oris Aquis Depth Gauge, to the obscenely expensive and borderline unwearable Blancpain X Fathoms. Introduced at Baselworld 2018, the Favre Leuba Raider Bathy 120 MemoDepth neatly slots in somewhere between the two aforementioned, joining a small handful of other offerings as a compelling and interesting option within the “luxury mechanical depth gauge” niche, if there were such a thing. 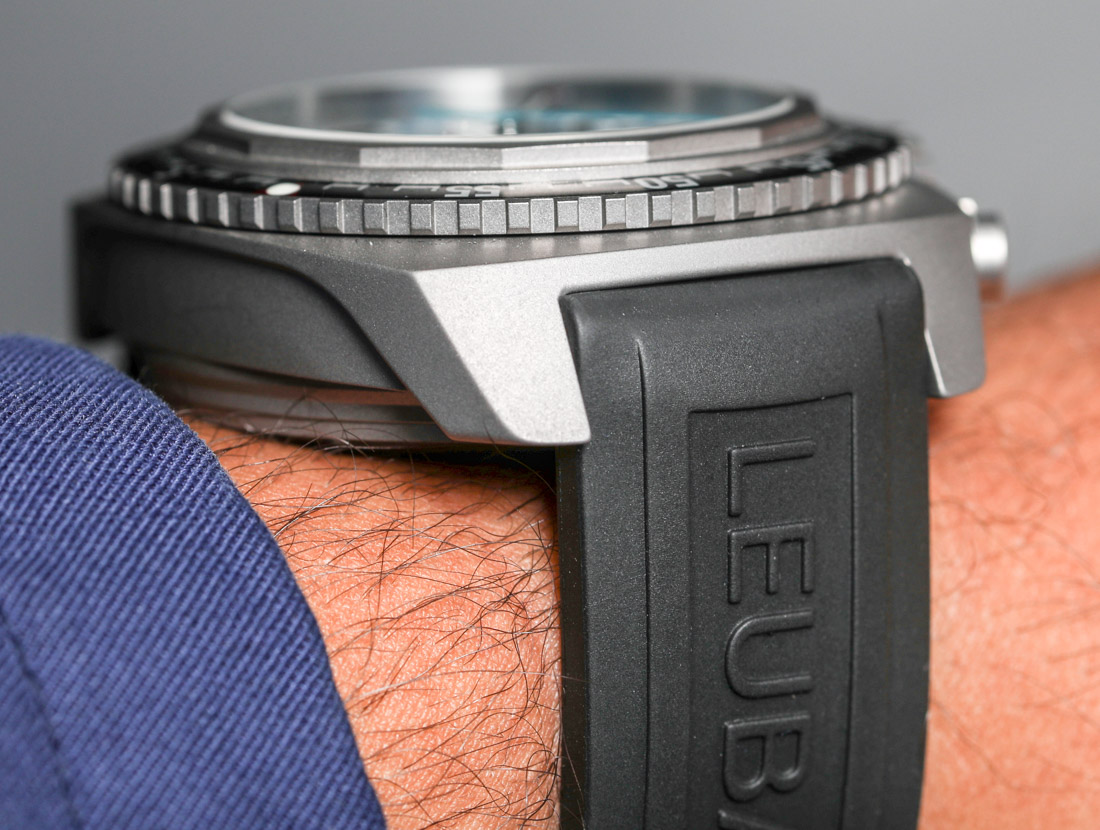 All images by Bilal Khan. 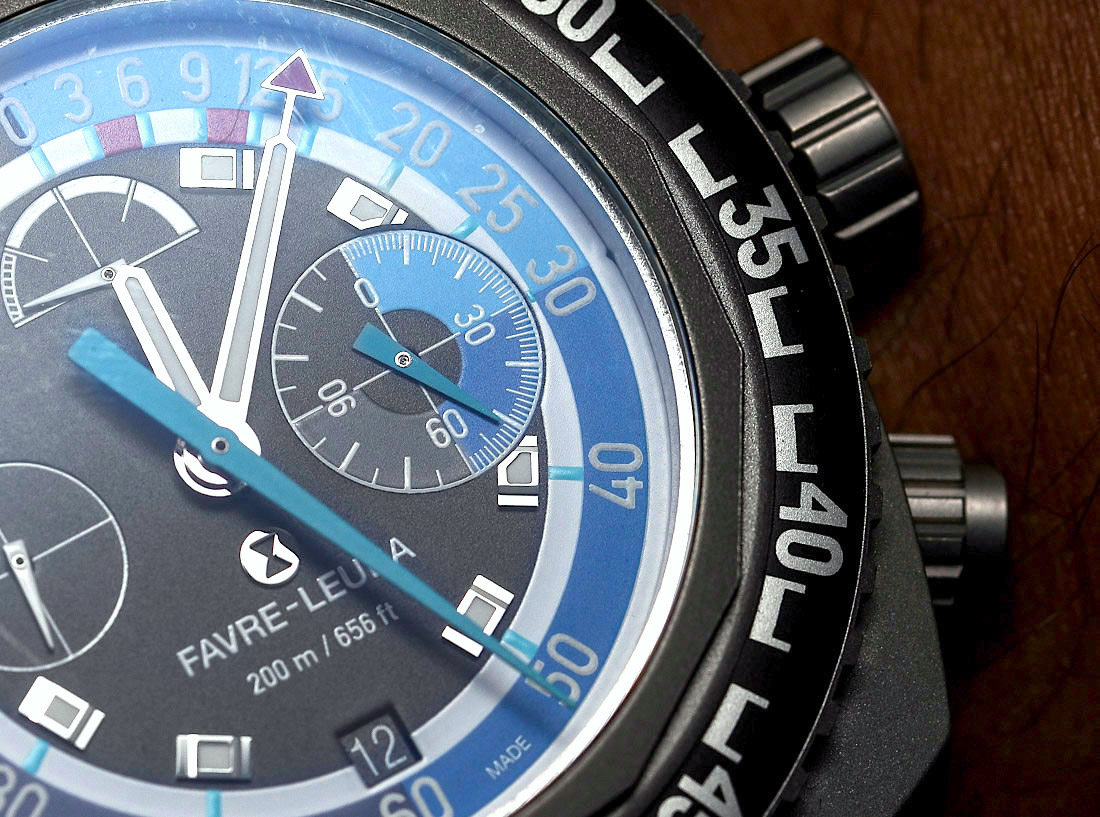 All images are of a Bathy 120 MemoDepth prototype – some subtle changes to the production version are to be expected.

No sense in burying the lede here though – the MemoDepth is neither small, nor cheap. Its grade 5 titanium case measures 48mm wide, and it carries an asking price of around $8,600, to be precise. But it introduces some neat capability not readily found amongst its peers – particularly at this price point. As hinted at in the name, this would be its mechanical depth memory, offered at roughly $10,000 less than the IWC Aquatimer Deep Three, and a full $30,000 less than the above halo depth gauge built by Blancpain, both of which are built with a mechanical “brain” to remember the previous dive’s maximum depth. 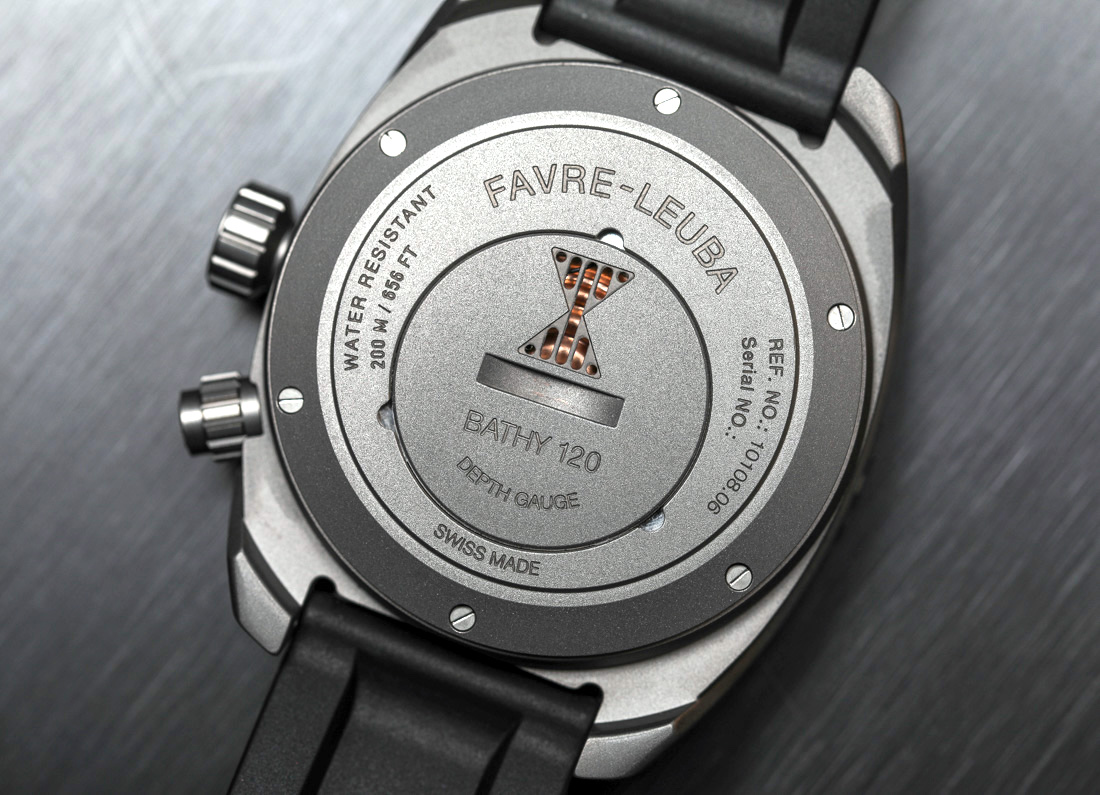 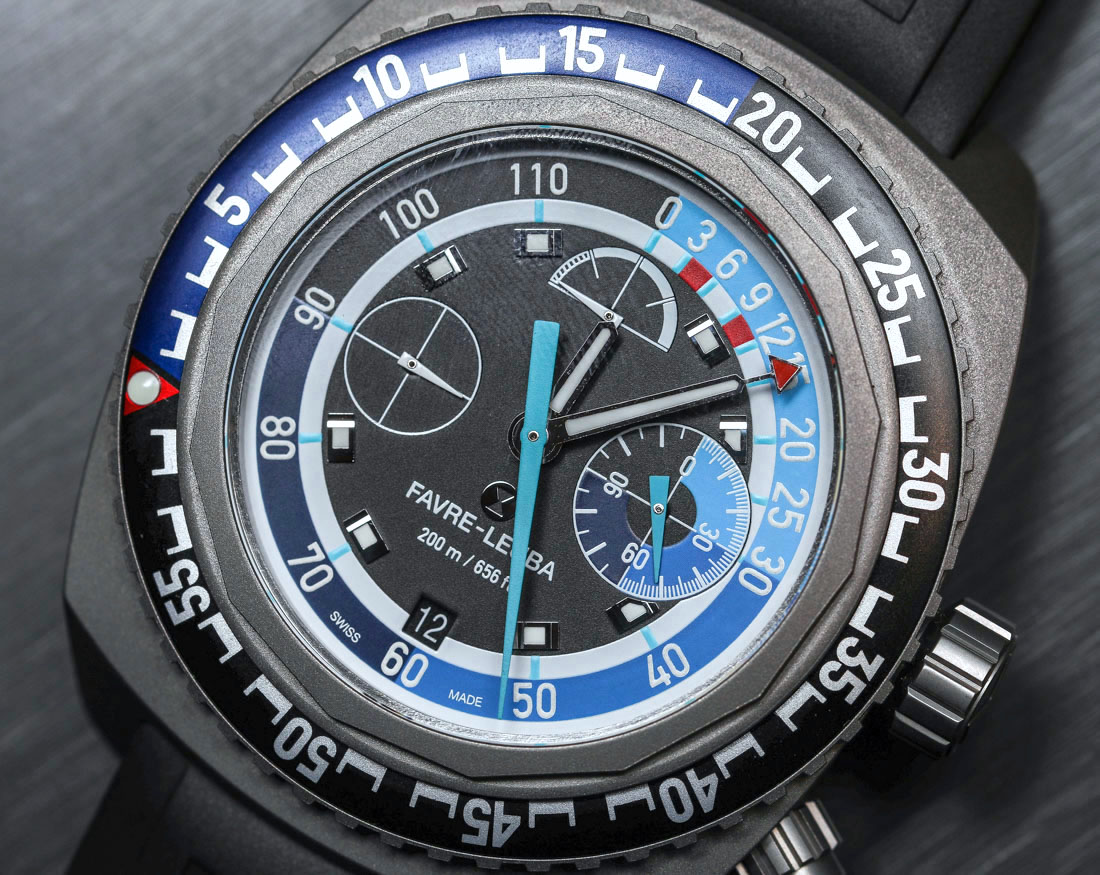 Before we get too carried away with the purpose and wearability of he MemoDepth, it’s worth briefly touching on Favre Leuba’s history a bit, as there’s a certain charm to their boilerplate that enthusiastically bills the brand as “the second-oldest watch brand in Switzerland,” existing in an alternate universe where there’s no such thing as second place being the “first loser.” In this instance, the bragging rights are certainly admirable – the brand got its start in 1737 when founder Abraham Favre registered himself as a watchmaker, only two short years after Blancpain got its start. But also like Blancpain, the brand has had long periods of inactivity – particularly during and after the quartz crisis, and most notably until 2011 when it came under new management, initiating a comeback that revisits the brand’s original focus of creating highly functional tool watches with real-world practicality. Favre Leuba did, after all, introduce the first wristwatch designed to measure altitude and air pressure for mountaineers and pilots, and would later introduce a series of pioneering mechanical depth gauge watches for divers in the ’60s like the Bathy 160, so it should come as little surprise that the brand continues those traditions with the MemoDepth. 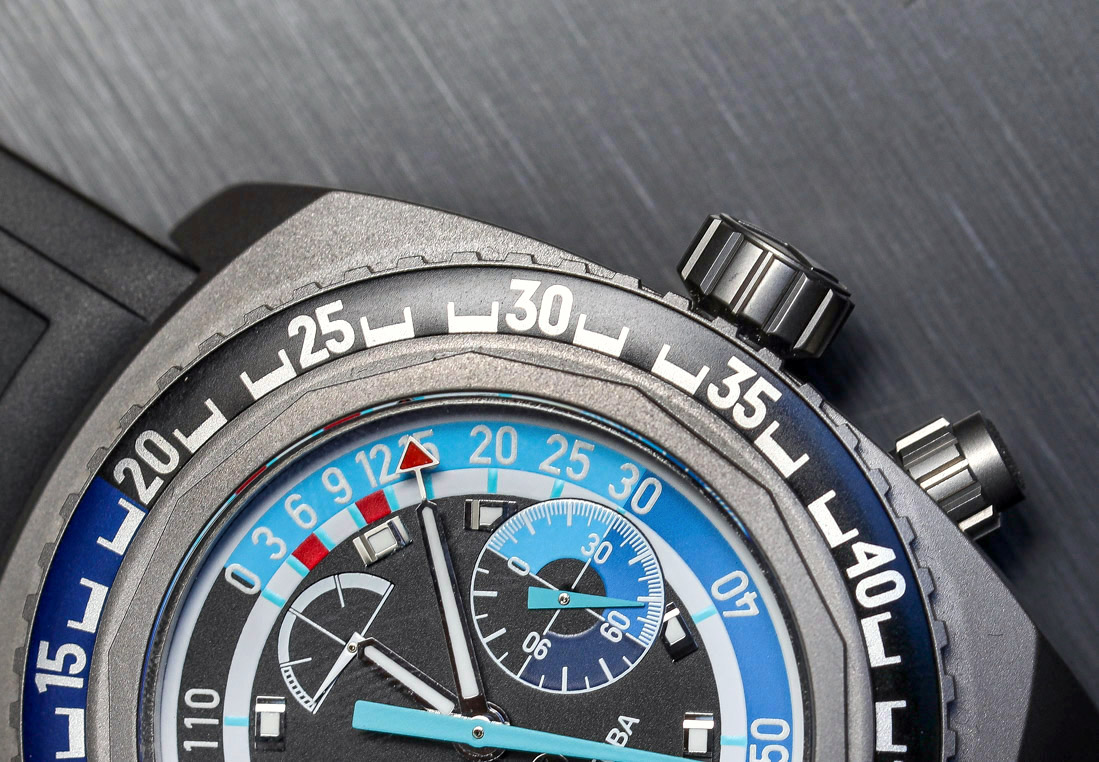 The MemoDepth is part of Favre Leuba’s modern ‘Raider’ dive watch collection, whose barrel-shaped cases and highly non-standard time displays help distinguish them from the herd a bit. Granted, though the MemoDepth utilizes a more conventional handset for timekeeping, it’s no less distinctive than its striking Raider brethren – it’s just relaying a lot more information, starting with the power reserve at 12:00, running seconds indicator at 9:00, and the maximum depth indicator at 3:00. The blue, center-mounted hand indicates current depth as outlined on the outermost ring around the dial, while the red-tipped minute hand can be used to count decompression stops as needed.

The gauge itself can measure depths of up to 120m (far deeper than any recreational scuba diver would endeavor to dive), though the case is water-resistant to 200m. For enterprising tech divers though, the watch is designed with a mechanical limiter which prevents the depth gauge from being damaged for dives beyond 120m. Just in case, right? 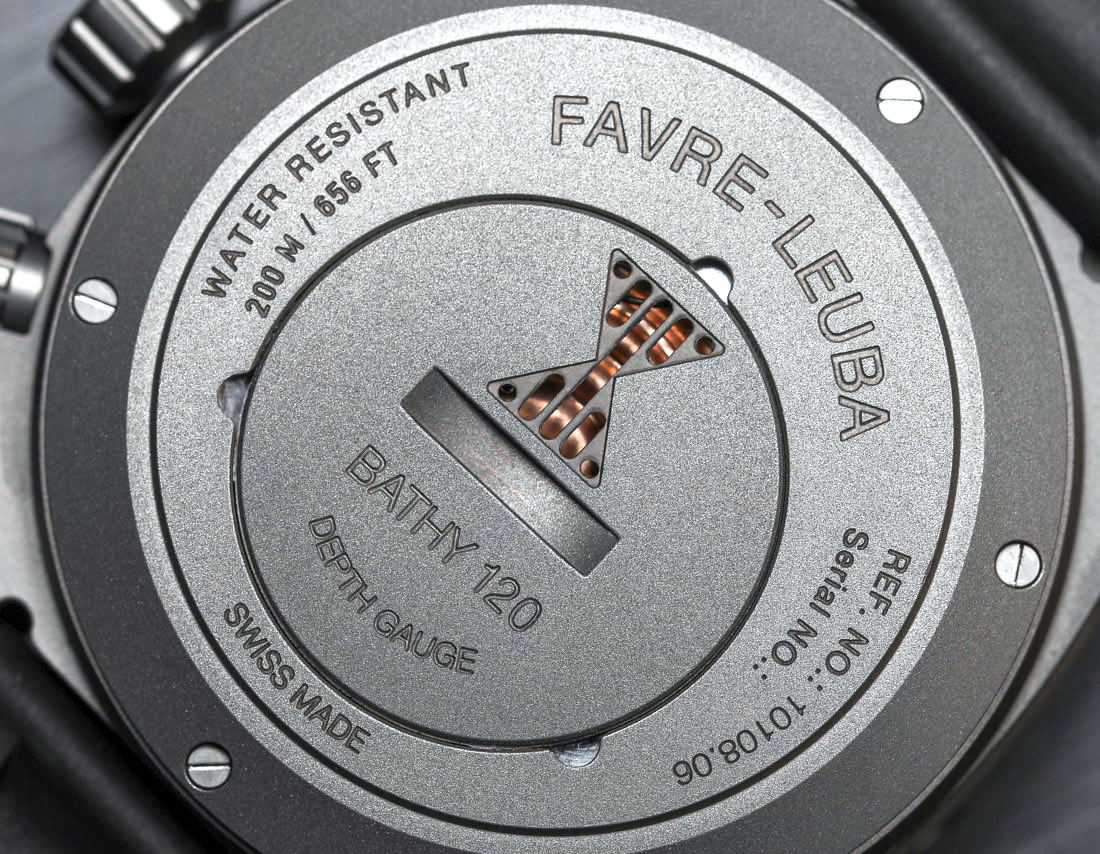 The MemoDepth is powered by a modified version of Eterna’s Caliber 39 – a relatively new, highly modular handwound mechanical movement. How modular? Eterna has 88 different variations on this single caliber, from time-only and chronograph complications, to GMT, and a whole lot more. While it’s unlikely that a mechanical depth gauge was one of those originally intended permutations, Favre Leuba has made it so, adding in a coiled copper aneroid sensor, which is visible through the caseback. This relatively common, albeit classic mechanical pressure gauge is driven by a sealed bellows chamber, called an aneroid (meaning “without liquid”), which lets in water, while expanding and contracting accordingly with the changing depth, thus driving the gauge on the dial-side of the watch. Though novel, what sets the MemoDepth apart from other depth gauge watches is its mechanical ‘memory’ of the deepest point on the dive – a crucial half of calculating the necessity of decompression, if needed. 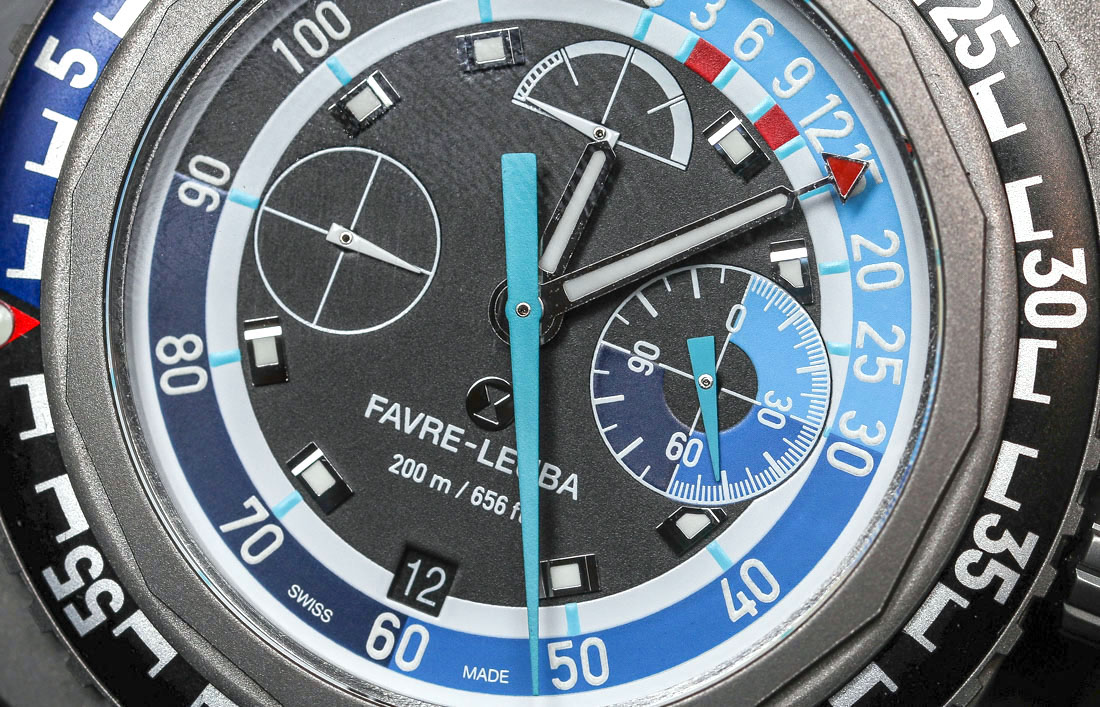 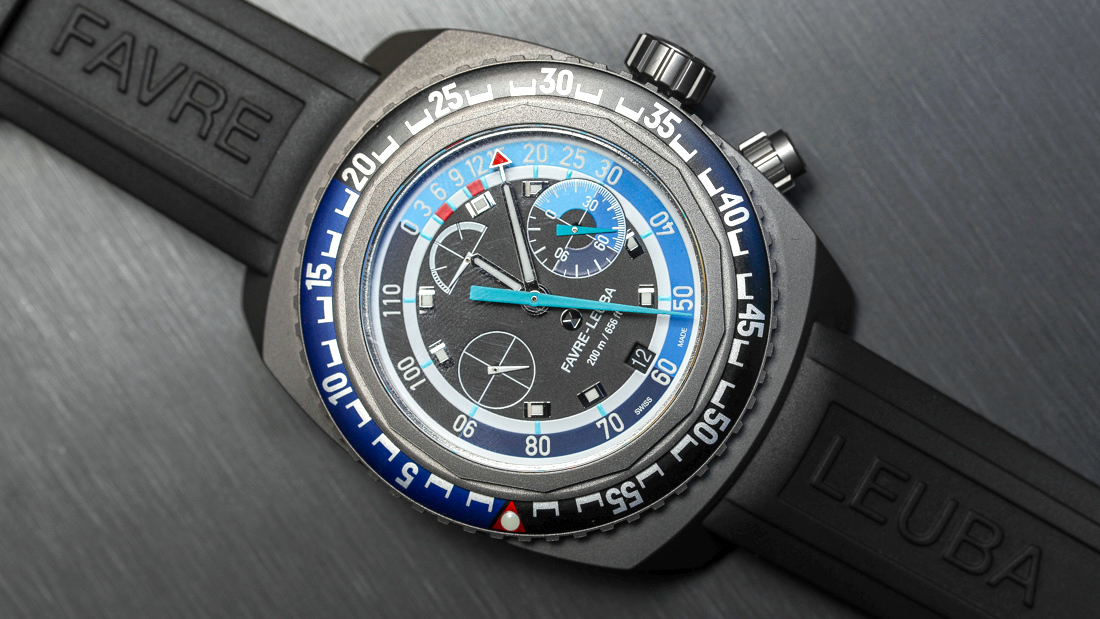 When being worn in the correct context as intended; over a thick wetsuit and fully submerged, the MemoDepth would expectedly wear much more comfortably. But topside? This is no small watch – and the 48mm by 19mm tall case makes no attempt to hide the fact. Here’s where I’d hazard a guess with this niche though – as a former owner of arguably the most wearable option in the category (the Oris Aquis Depth Gauge), I’d say that wearability of these types of instruments is secondary to the overall utility of the watch itself, and how legibly its information can be relayed. For these marks, the MemoDepth excels – its dial is busy, but with some clever color-coding (notice how the shades of blue get darker with the corresponding depths in both the current, and maximum depth sectors) and a layout that clearly pays homage to the sorts of details that were paramount in the pre-dive computer era, it still works extremely well. It doesn’t hurt that the case itself exhibits some very cool lines and angles that make the 48mm footprint on the wrist an interesting one to behold indeed.

If you’ve got the wrist, or are just looking for another cool novelty to draw the eyes of the boat’s divemaster on your next holiday, the Favre Leuba Raider Bathy 120 MemoDepth has a price of $8,600, and can be ordered directly from the brand’s website. favre-leuba.com