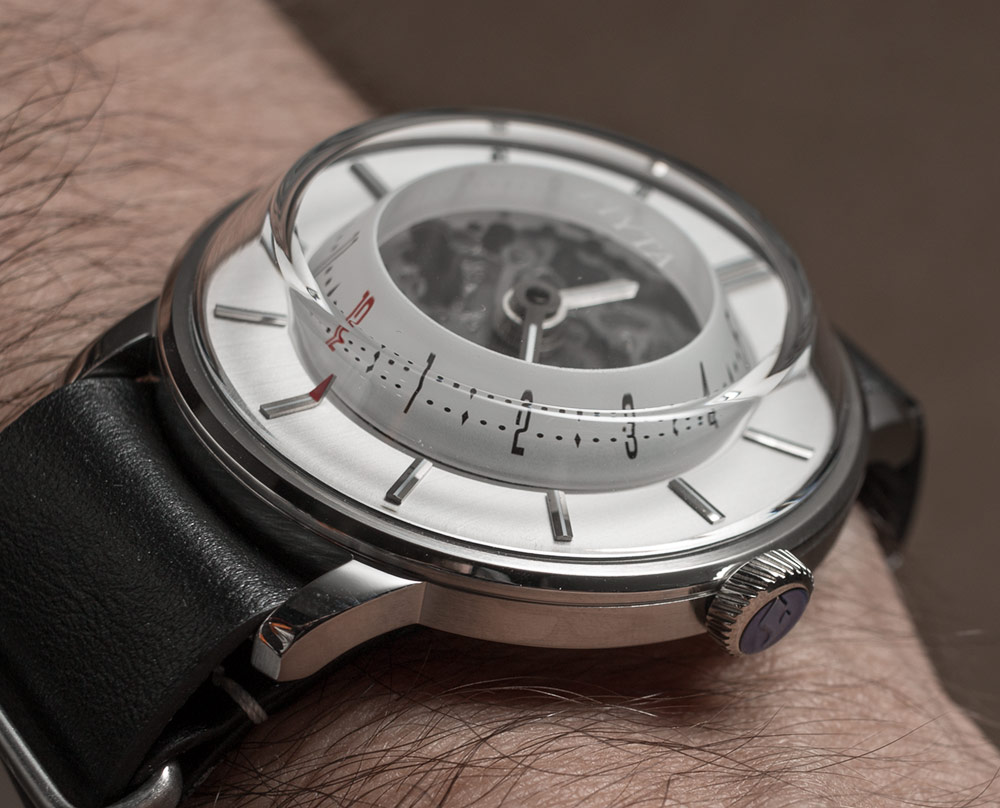 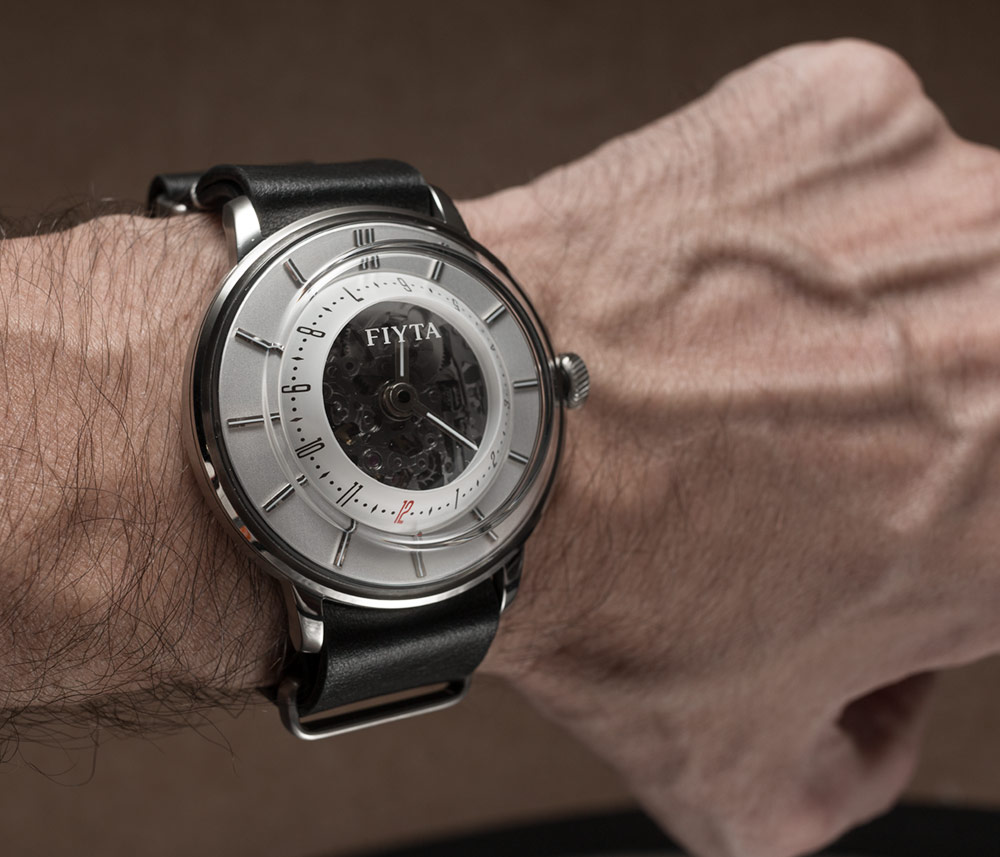 It’s really fun to have the chance to introduce a watch like this one. Fiyta is a brand that many readers may not have heard of before, but they are one of the more successful modern watch brands in their home market of mainland China. Even if something like the Fiyta 3D Time Skeleton is not destined to be a daily wear for a lot of “timepiece aficionados,” it’s at least a good opportunity to learn about a Chinese brand that’s doing some interesting and original things. 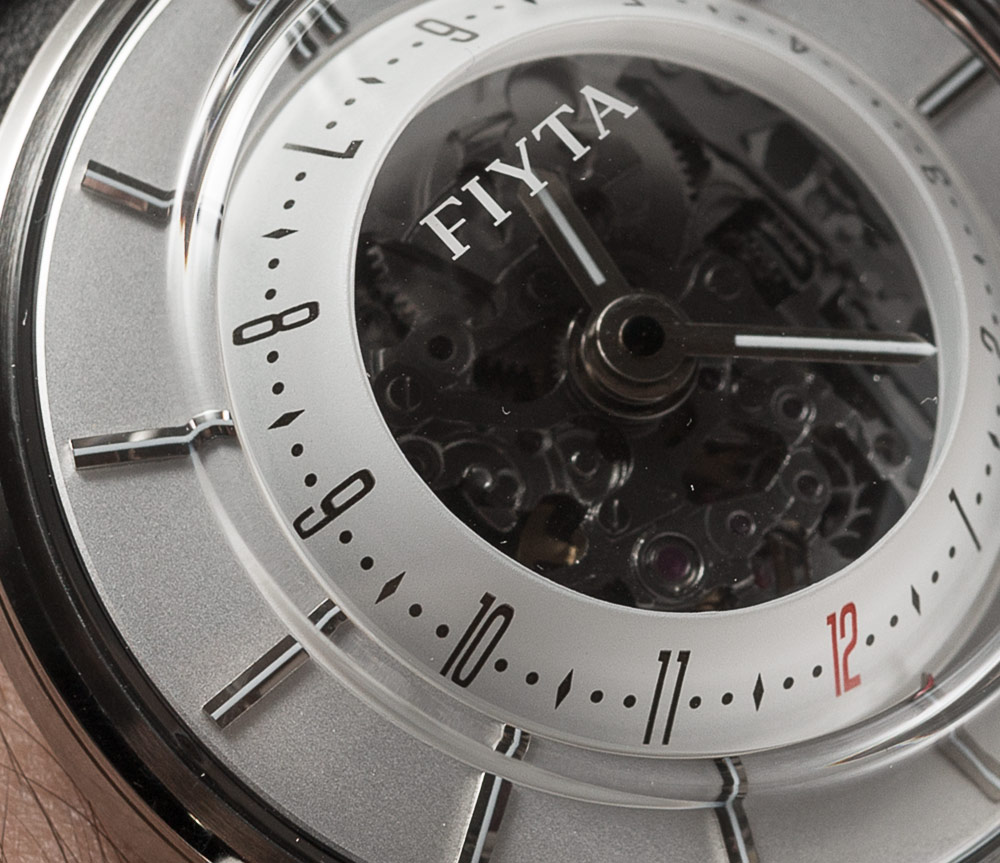 All images by Zen Love 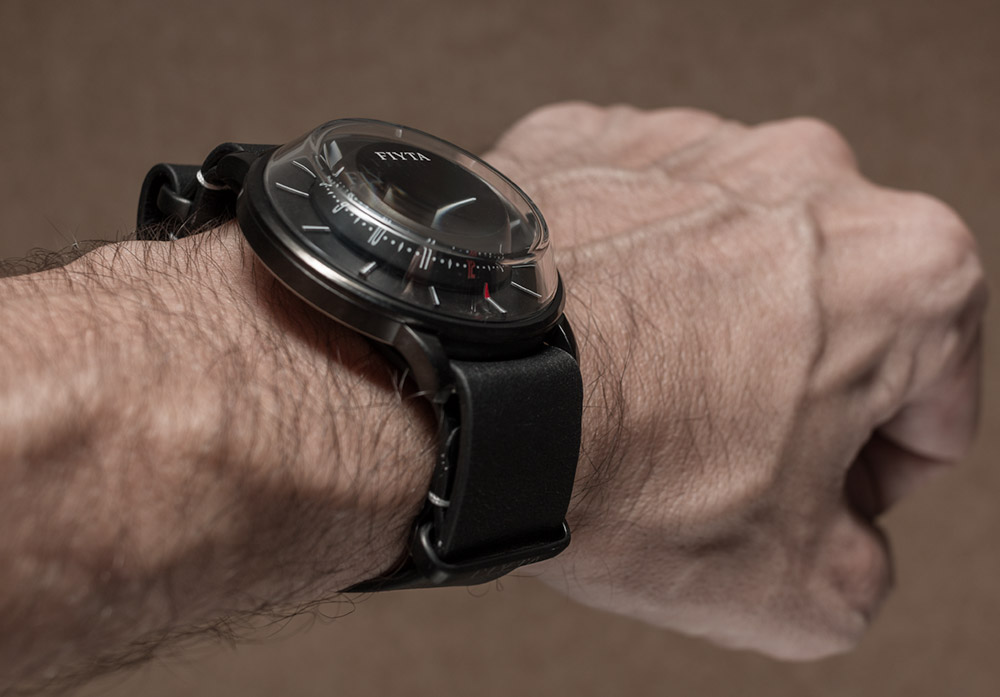 I’ve said it before that the world of Chinese watches, and indeed China itself, is in many ways like a parallel universe that is often very difficult to get reliable information or a firm handle on. What you need to know about Fiyta first is that they’re a big company that makes a lot of watches – Fiyta is actually under the umbrella of the government’s Aviation Industry Corporation of China. Based in Shenzhen, they’ve been around since 1987 and are now listed on the Shanghai Stock Exchange, with their own manufacturing, sales, and distribution across China and, to a limited extent, abroad – I understand they are working to expand internationally. Fiyta claims to have developed things such as their own DLC (diamond-like carbon) coating technology and patented titanium alloys, and are most well-known for having provided the “Spacemaster” watch worn during the first spacewalk by a Chinese taikonaut. 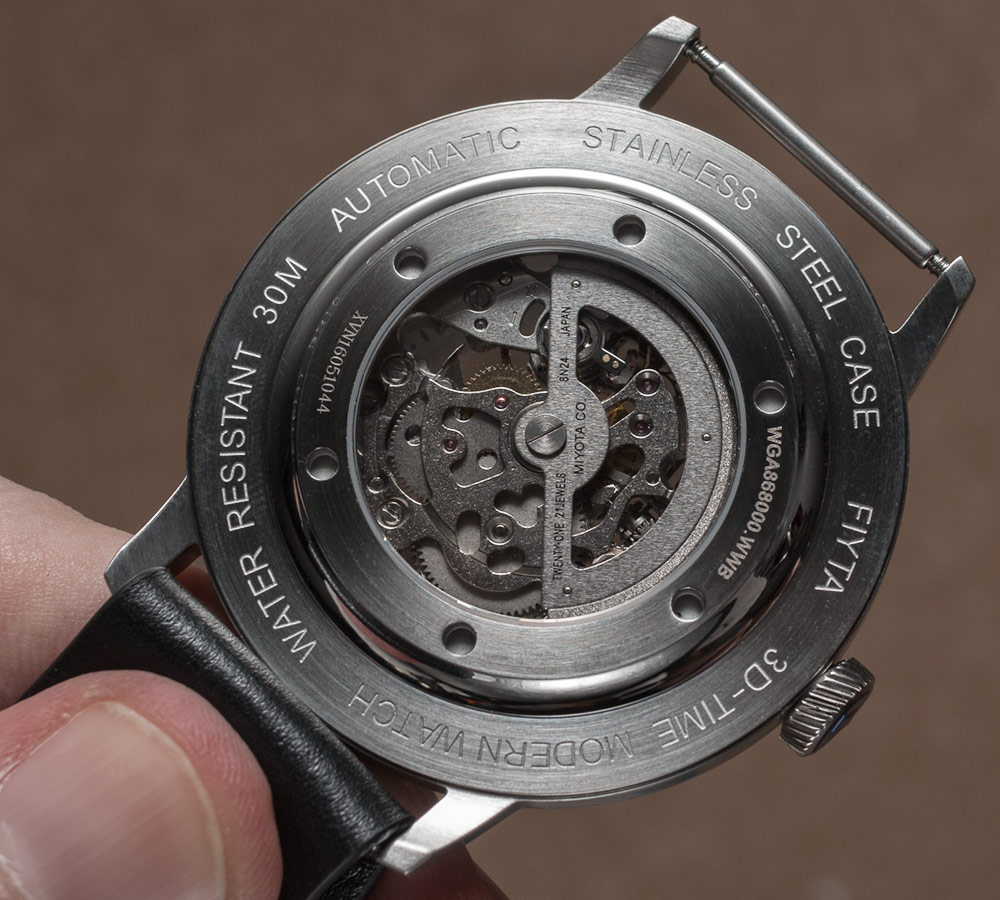 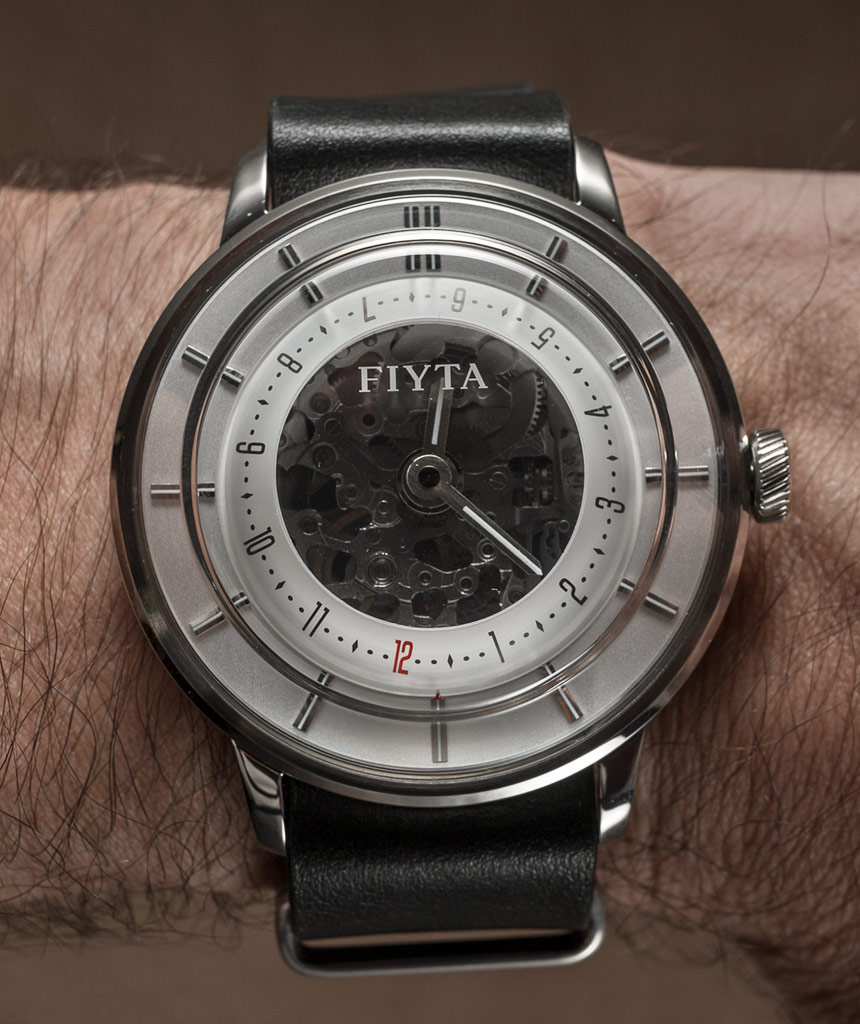 Fiyta makes a very wide range of watch styles, to the point of making it hard to pin down any real consistent brand image or personality – I think it’s there if you look long enough but could certainly use some refinement. One feels that limiting their range and focusing on their strengths would help consumers better understand and trust the brand. Most Fiyta watches seem to be mass-produced and aimed at a relatively budget range, and I believe the mechanical movements they use are mostly sourced from Japanese Miyota, as in the Fiyta 3D Time Skeleton. 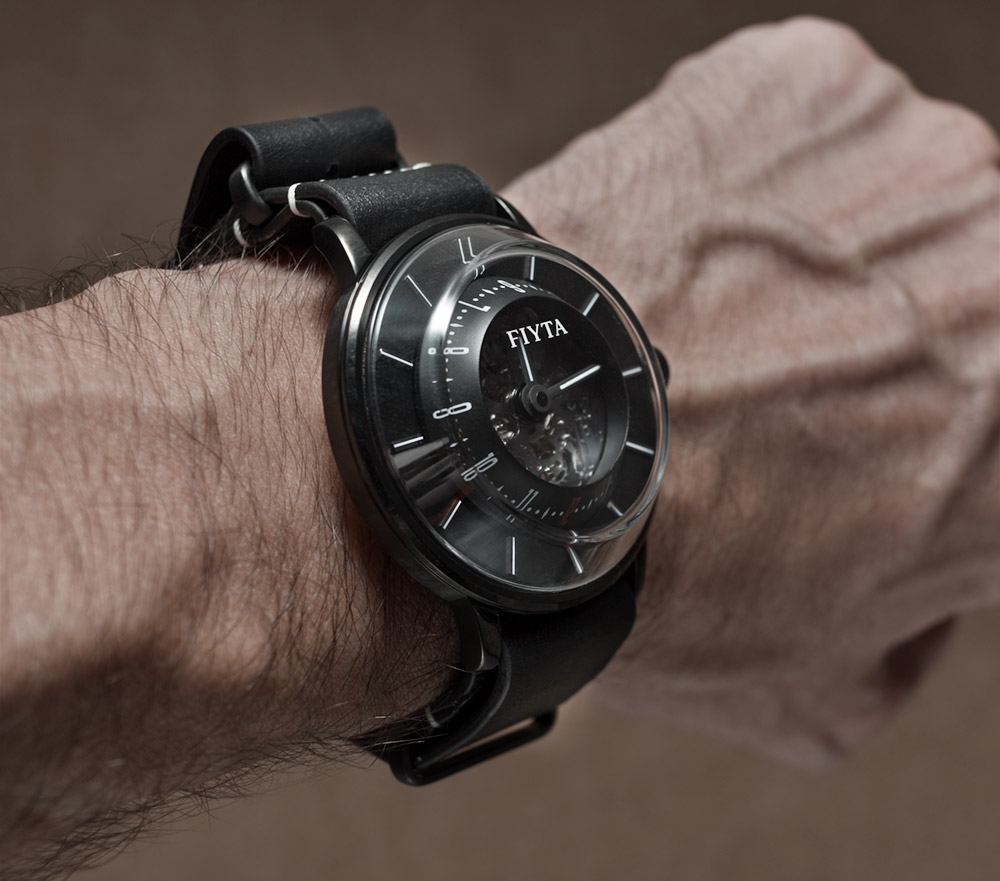 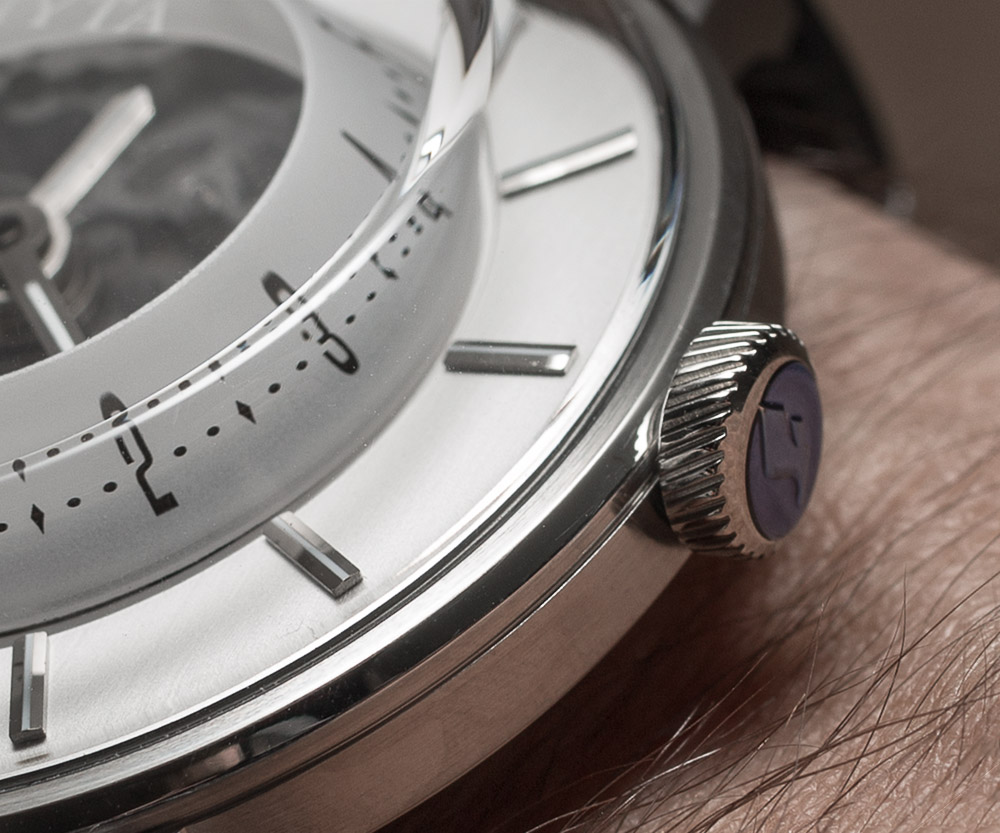 The Fiyta 3D Time Skeleton watch was first released in 2014, but the brand has gotten some attention and success from it and continued to release more versions. I got to see some Fiyta 3D Time Skeleton models and other Fiyta watches at the 2017 Hong Kong Watch & Clock Fair earlier this year. There are a number of versions with different colors and finishes, but the simplest ones in black and white seen here make the most sense to me because the design by itself is crazy enough. 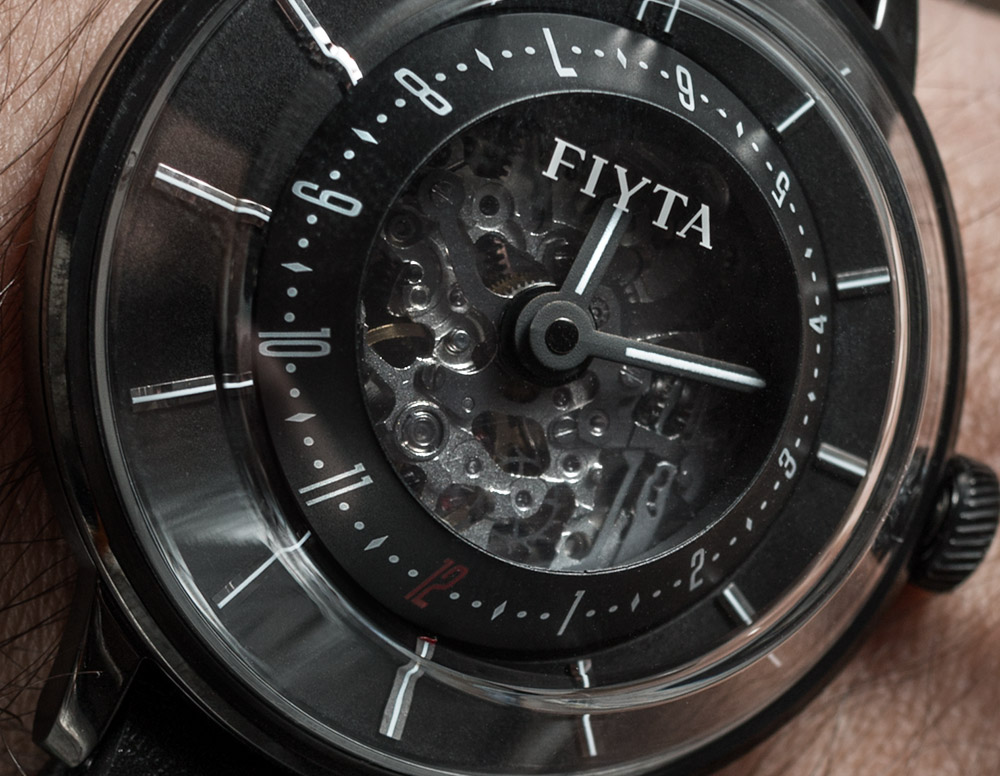 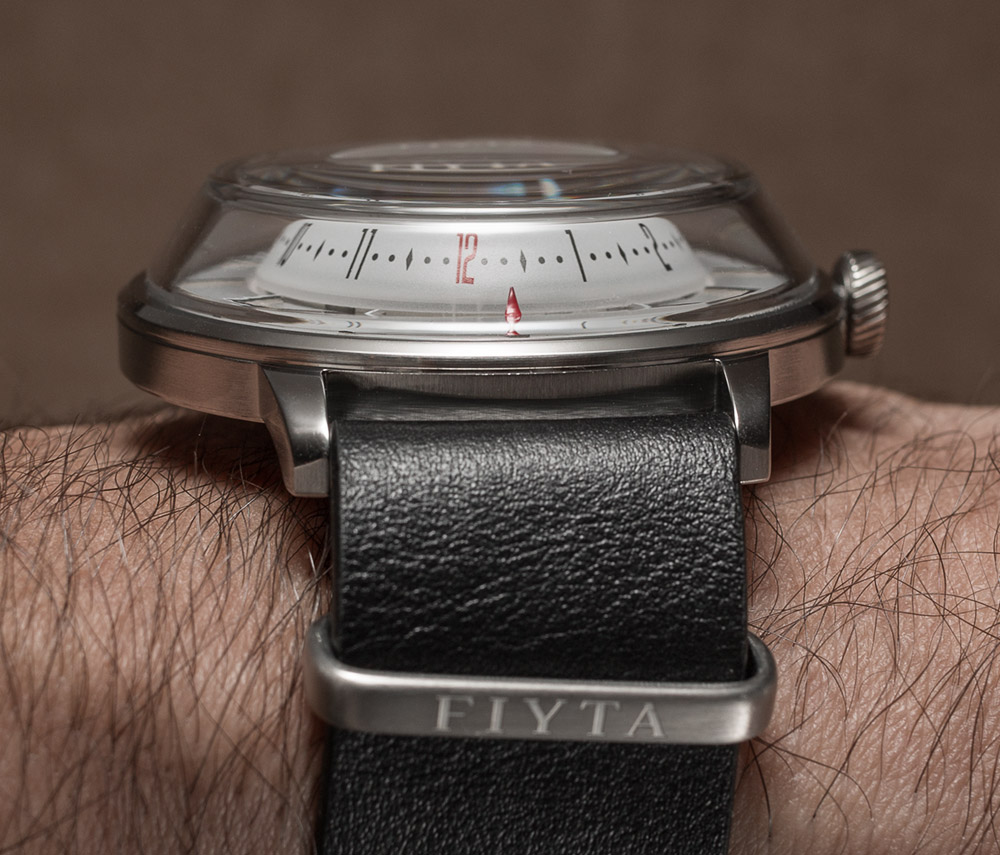 Clearly, the Fiyta 3D Time Skeleton is more of an exercise in wrist-art, design, or fashion – but it is more interesting because it’s also got some functional justification. The current time is displayed twice. From the top, it is read as normal, with hour and minute hands that extend straight from the skeletonized Miyota movement below pointing to applied stick-shaped hour markers around the dial periphery. In the middle, however, as you have surely noticed, is a raised and angled ring with Arabic numerals, and the numerals don’t match up with the stick indices. This ring turns but is not displaying a second time zone – rather, it displays the current hour as indicated by the red arrow at the 6 o’clock position. For example, the picture above shows the time as just past 12:20. 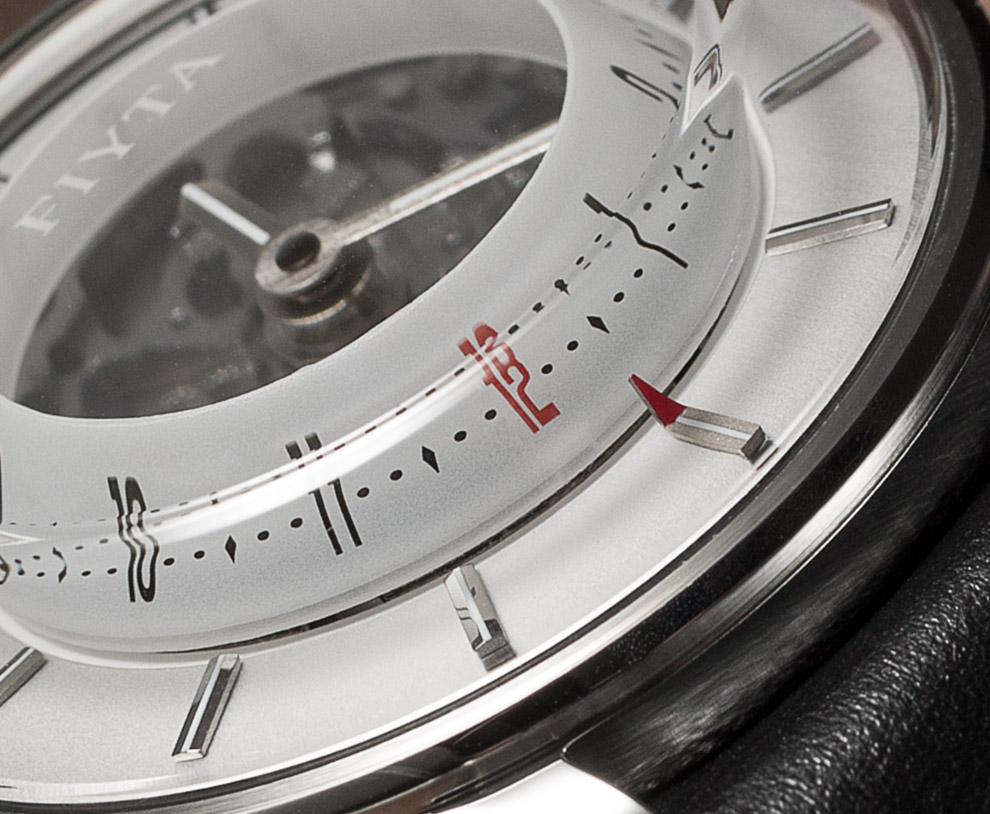 This is for being able to read the time at an angle without having to turn your wrist – as may be required for certain activities such as driving where one’s hands need to stay on the steering wheel. There’s a whole genre of watches called “driving watches,” in fact, that are anything from regular watch dials but with a diagonal orientation (such as this one from Vacheron Constantin) to time displays that are meant to be viewed exclusively from the side (e.g., this MB&F HMX watch as well as others from the brand). Fiyta’s approach, though, is pretty novel. 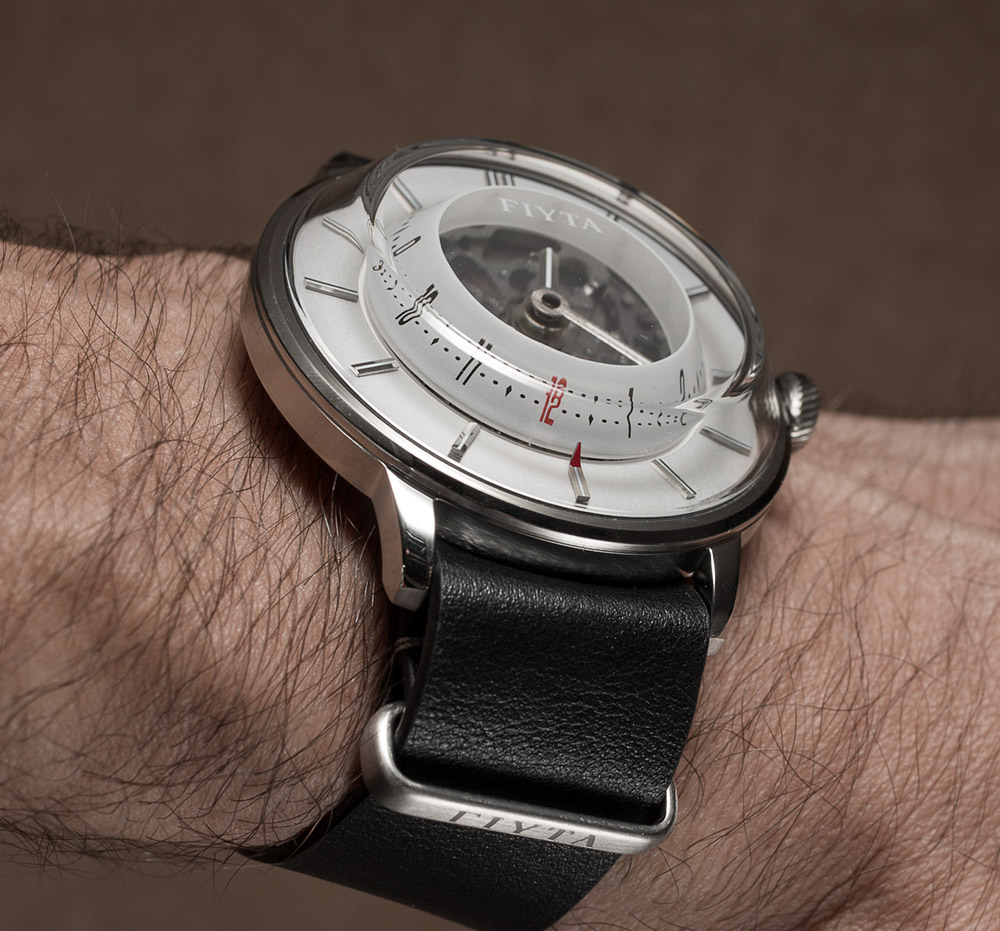 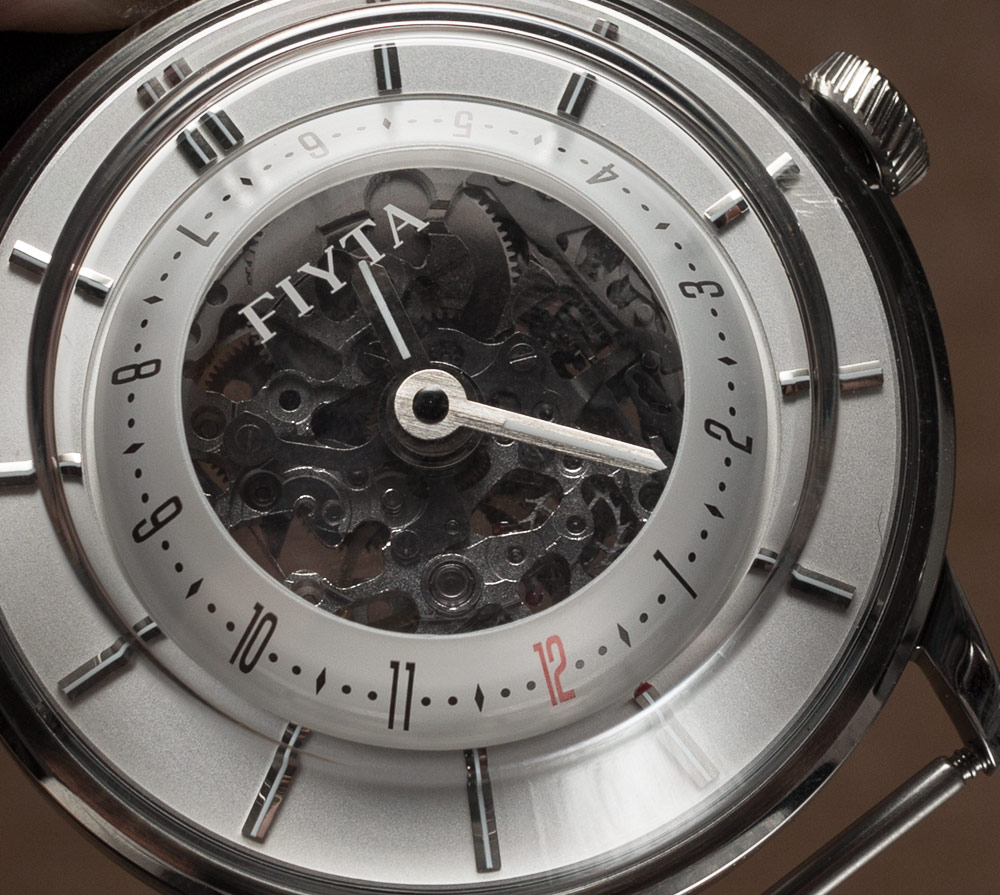 The center ring probably didn’t “need” to be quite as tall as it is, strictly speaking, but it has certainly led to an interesting look. The ridiculously tall “cambered polycarbonate glass,” however, was then necessitated by that ring – and it is hopefully reasonably scratch-resistant because the glass will be the first part of the watch to get bumped. All in all, it is quite the combination of features. This level of avant-garde design is rarely seen between ultra low-quality fashion watches and ultra high-end concept art (occasionally also found among crowdfunded watch projects) but that is exactly the space the Fiyta 3D Time Skeleton occupies. 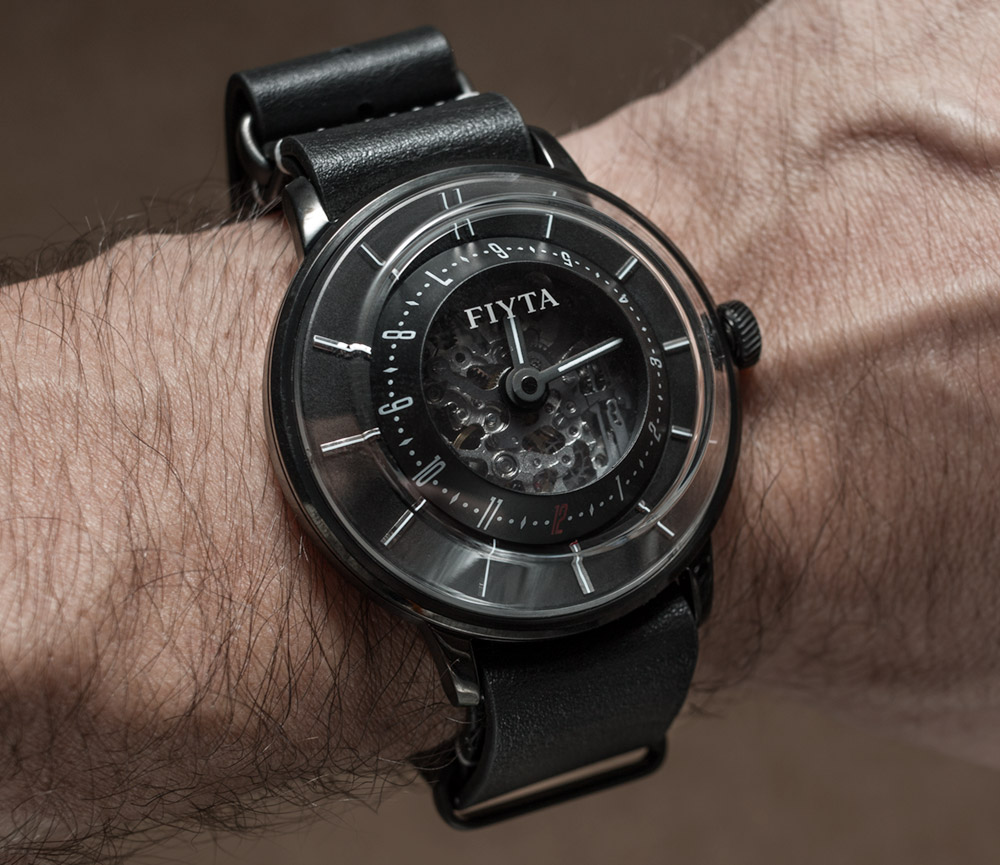 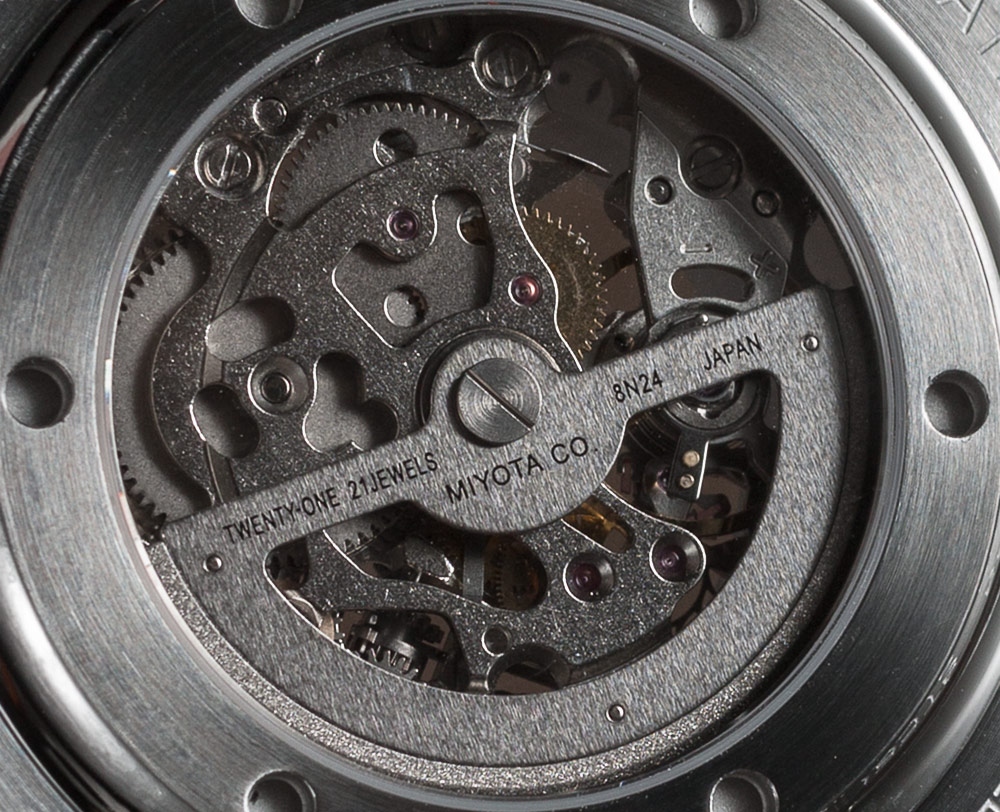 The skeletonized, bare-bones Miyota movement on display from the dial side is more clearly visible through the back. It is the automatic Miyota 8N24 movement, as is stamped on the watch’s rotor, that operates at 3Hz with a power reserve of 42 hours, and it offers hand-winding but not hacking (meaning it doesn’t stop when setting the time, which shouldn’t be very noticeable anyway since there is no seconds hand). At 45mm in steel with a water resistance of 30m, the Fiyta 3D Time Skeleton case is pretty standard and minimal – thankfully, because there is so much else going on. The models I tried on came on soft leather NATO-style straps that could be improved on (I remember that they tended to get skewed), but the watches fit well on the wrist despite their ample size.

“3D” is in the name, obviously, because of the extreme depth of the design with its tall crystal, vertically angled inner ring, and the skeletonized movement that seems to sit in a recess. The applied hour markers and brand name printed on the crystal (something I’m not usually a fan of) add further to its “dimensionality.” I actually like that there is not much more explanation for its existence from the brand (that I know of), leaving the design to speak for itself. In the end, I’d say it’s a bit like wearing a flying saucer. The Fiyta 3D Time Skeleton watch has a USD retail price of $540. fiyta.com