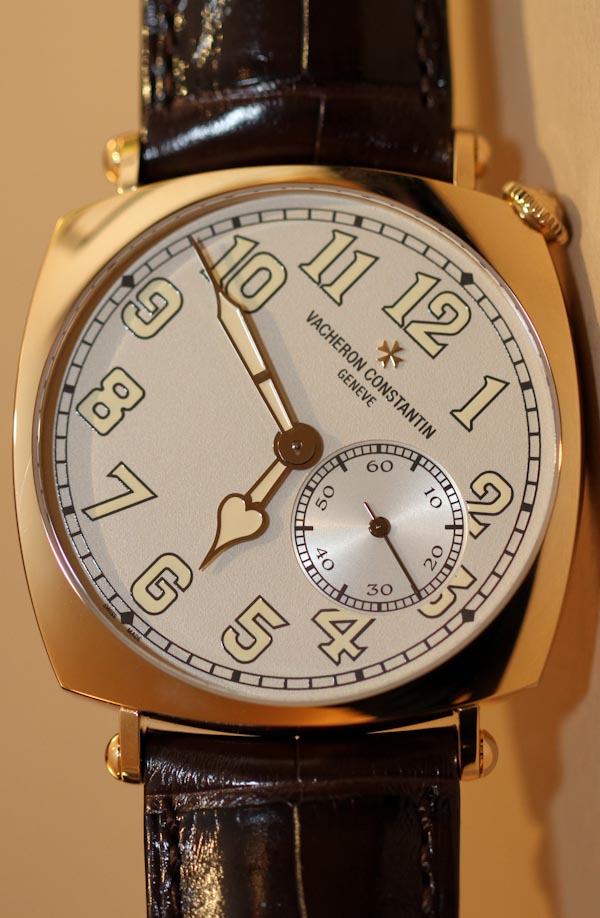 In the 1920s, Vacheron Constantin built some interesting cushion-cased watches with tilted dials on request. The request came from the United States, and I believe the idea was to produce a driving watch that could be read while you grasped the steering wheel. The era and budget no doubt make you think of some Great Gatsby style character riding around in a long-hooded roadster with chromed cooling pipes coming out of the side while wearing driving gloves and a windswept scarf. Oh to be legally driving drunk! 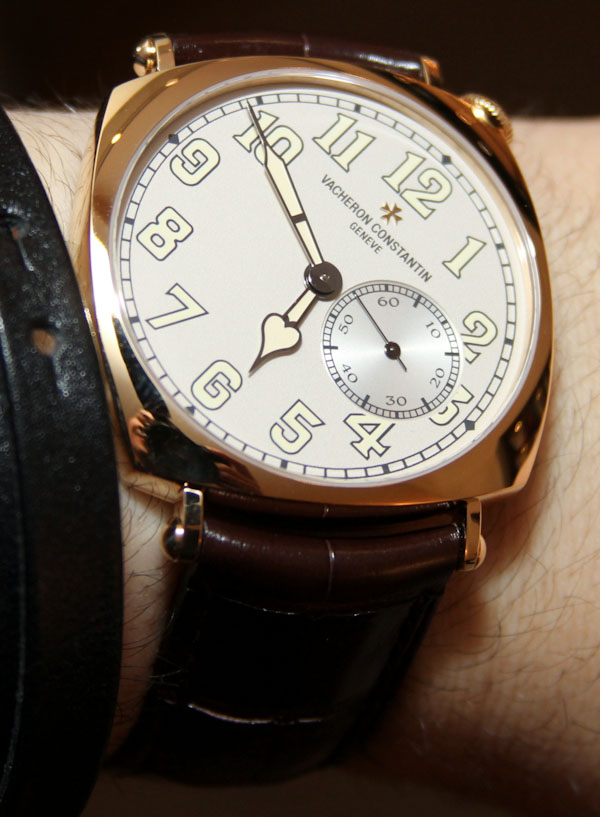 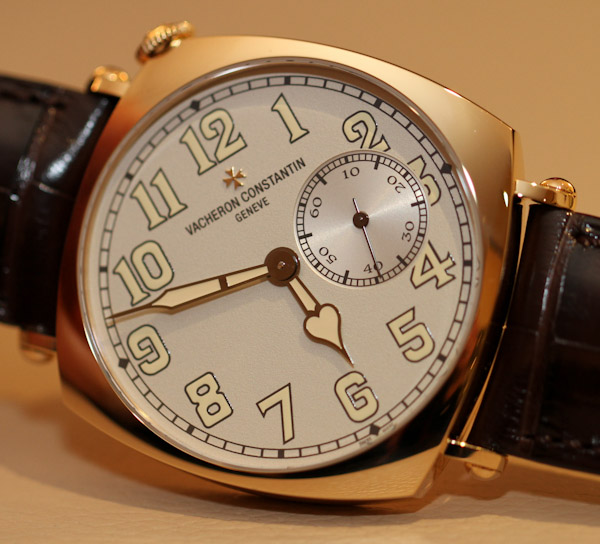 This is not that model. Well not exactly. This is a special limited edition version of the Historiques American 1921 made especially for the Vacheron Constantin boutique on Madison Avenue in New York city (ref. 82035/000J-9717). Aside from special branding on the rear of the watch, the dial of the boutique model is different from the standard Historiques American 1921 piece. Frankly, I think this dial is the best. While the standard model has more classic, thin Breguet style numerals and pomme hands, the boutique model is the sporty brother. Here you see a military dial inspired watch with large Arabic hour numerals and beautiful hands all coated in lume. Mega bold look with mega legibility. Much more character than you might come to expect from a piece like this. My understanding is that dials such as this have been on some older Vacheron Constantin pocket watches and more important, the limited edition dial is more akin to the original 1920s driving watches that Vacheron Constantin produced.

As you might expect from a Vacheron Constantin piece, the detailing on the dial and case are pretty much immaculate. The hands are very well rendered and I actually love the “hidden heart” which tips the hour hand. Notice how the subsidiary seconds dial is slightly recessed and is done in a different silvered finishing. This adds an additional layer to the dial. Around the dial is a rail-road track style minute ring. 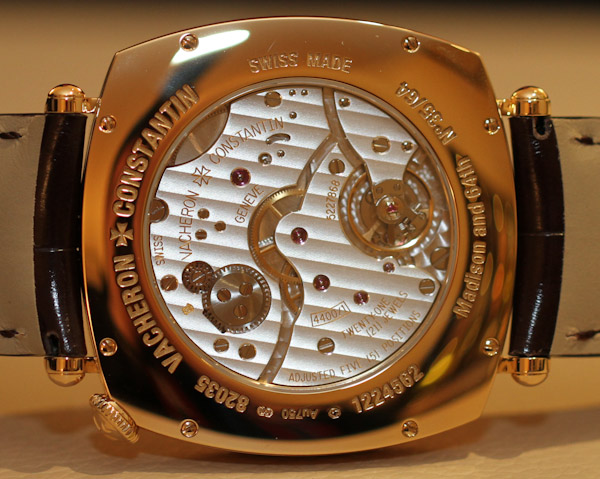 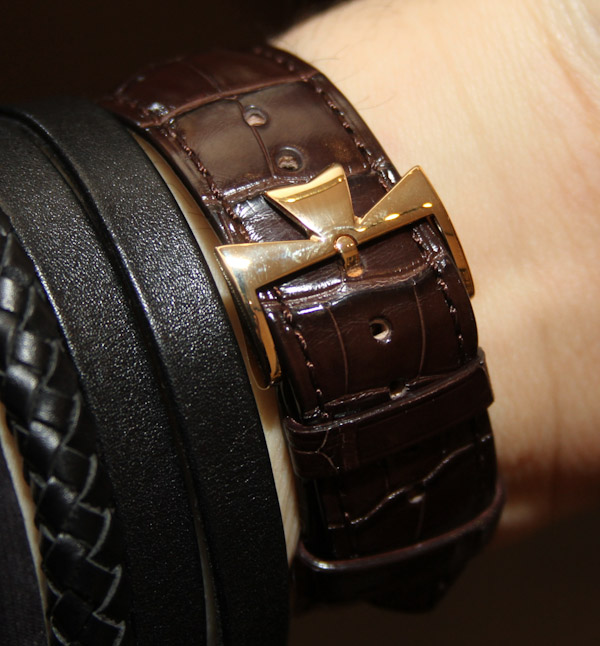 The watch case is only 40mm wide but wears larger given the widely spaced lugs and cushion shape of the case. At 8mm thick, the case is very svelte on the wrist. I would even argue that this is a watch for larger wrists given the short, but straight lug positioning. Over the dial and caseback are sapphire crystals.

Vacheron Constantin opted to go with an 18k yellow gold case – which is actually rare given that you see very few gold watches in America that are done in yellow gold. The case is very pretty with a fine polished on its surfaces. Vacheron Constantin maintains the tilted movement look with the crown being right above 12 o’clock, which on this watch is at the 1:30 or so position. 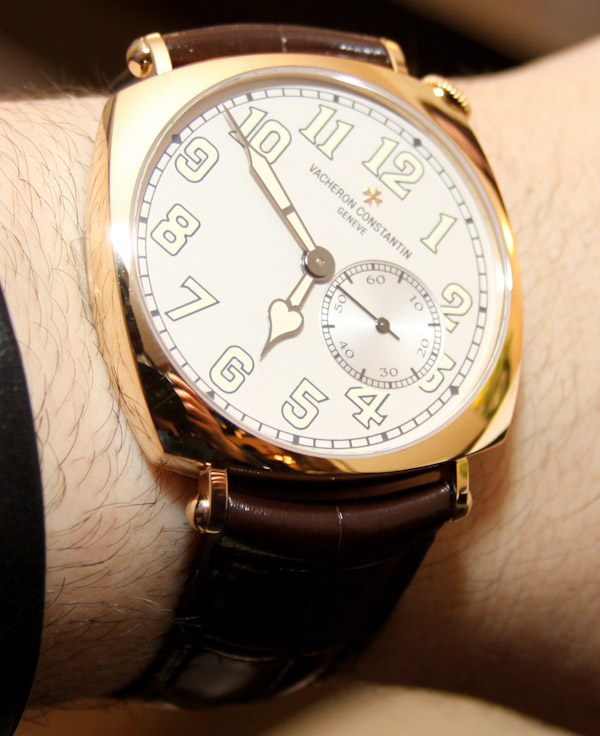 Inside the Historiques American 1921 Boutique New York watch is the newer Vacheron Constantin in-house made caliber 4400 manually wound movement. This is VC’s version of a high-end work-horse movement with an attractive design and high level of finishing/decor as seen through the rear of the watch. The movement has been designed to be easily serviced and last a long time. It is just 2.8mm thick and has a power reserve of about 65 hours. The 4400 movement is an updated on the classic caliber 1400, but in a larger size with a longer power reserve. Attached to the case is very beautiful hand-stitched glossy brown alligator strap. Don’t miss the signature Vacheron Constantin Maltese cross logo (half of it) on the buckle.

So what is it like on the wrist? Well it takes some getting used to – unless you are driving that it. Reading it is easy if you keep your wrist in the right position, and it looks very novel. People will certainly wonder why your watch is off-axis, but that just gives you an opportunity to explain. Very few formal style pieces like this can offer that. The Vacheron Constantin Historiques American 1921 Boutique New York watch is limited to 64 pieces and is priced at $36,400.