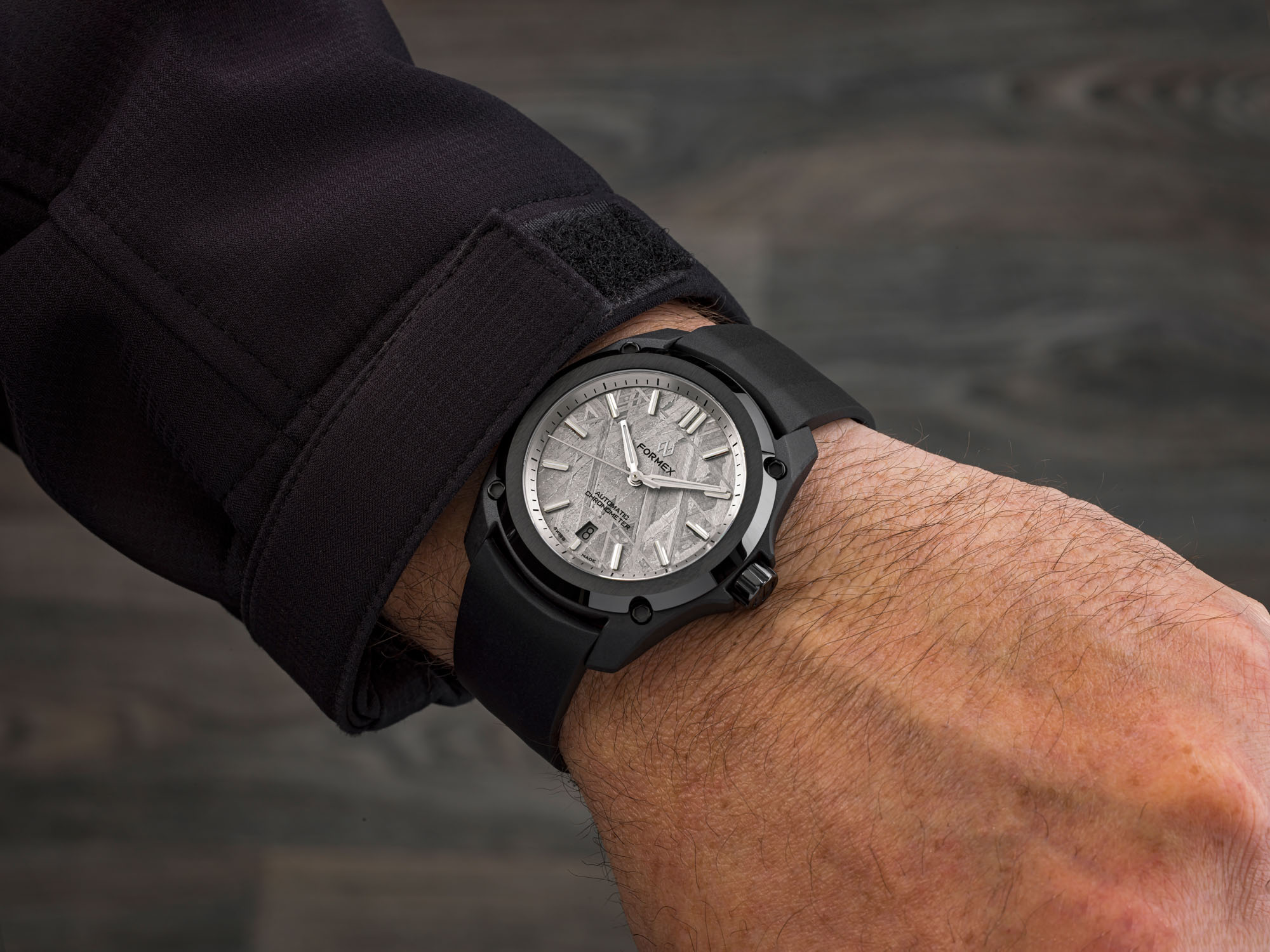 As its final release of 2022, Formex has unveiled a duo of limited-edition watches with meteorite dials. Based upon two of its most popular models — the stainless steel Essence ThirtyNine and the lightweight carbon fiber and ceramic Essence Leggera FortyOne — these feature dials crafted from slices of the ancient Muonionalusta meteorite, which crashed to Earth in what is now northern Scandinavia approximately four ice ages ago. Formex has previously featured meteorite dials on the 43mm versions of these watches (back in April 2020), and while those models were limited to just 50 pieces each and sold out within just a few days, the new Essence 39mm and Essence Leggera 41mm Space Rock watches will each be limited to 88 pieces, bringing this highly popular extraterrestrial dial material to two of the brand’s most versatile models. 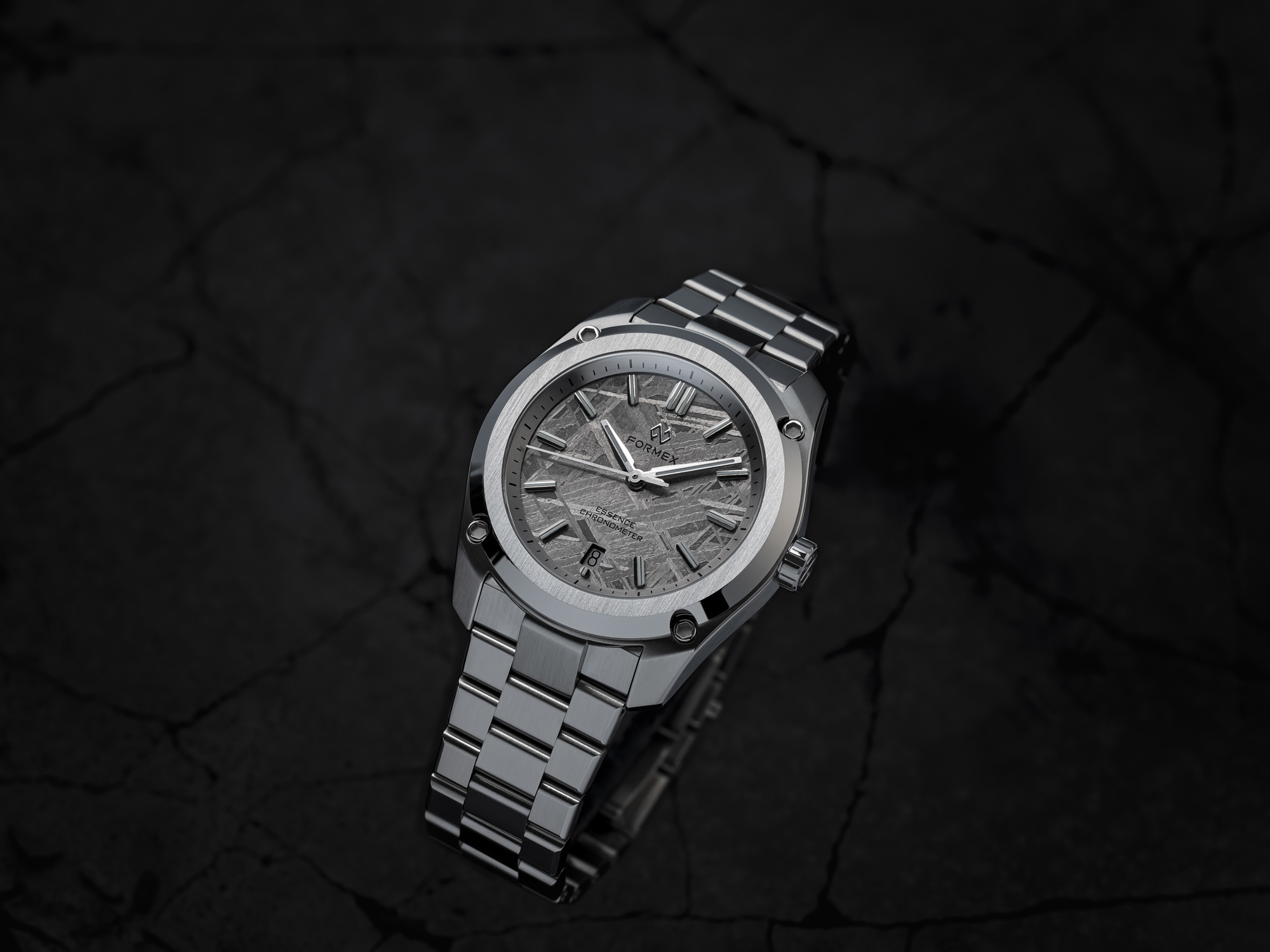 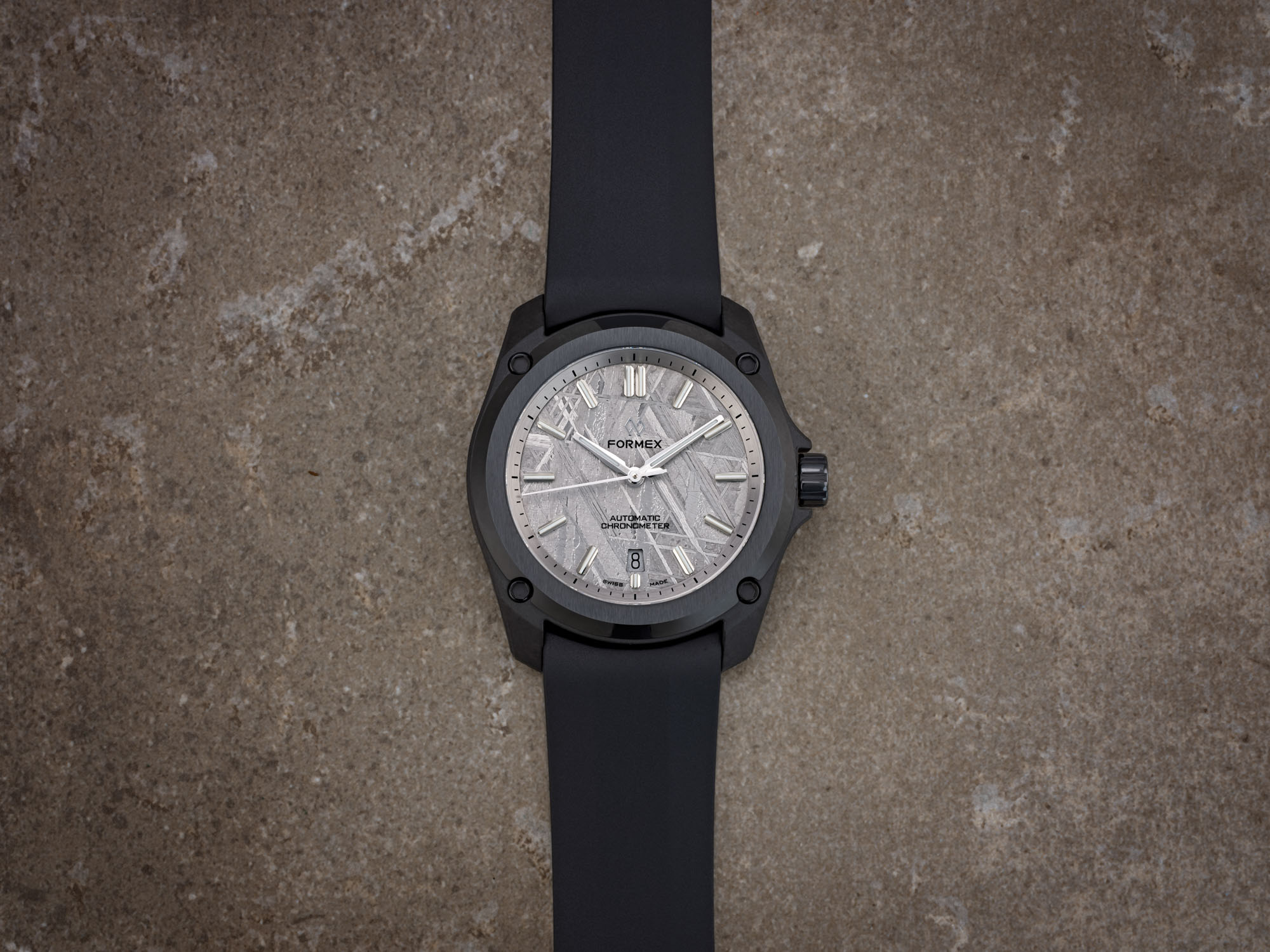 To create the dials, Formex used slices of the Muonionalusta meteorite, which is an ancient iron space rock that landed in a 25 x 15-kilometer area north of the Arctic circle, located at 67°49’ N, 23°9’ E. Sourcing the meteorite fragments is difficult due to the fact that the ground in the region is frozen solid for most of the year and receives zero sunlight for several months at a time. The fragments are cut and machined into perfectly flat discs that measure just 0.65mm-thick, and the material is treated to bring out the naturally occurring “Widmanstätten” pattern, which is the result of the molten core of the meteorite slowly cooling and crystalizing over the course of millions of years as it travels through space. Just like any naturally occurring material, the crystalline pattern of the meteorite will be slightly different for each dial, and no two examples will be exactly the same. To complete the dial, polished hour markers with Super-LumiNova BGW9 inlays are applied to the surface, while a trapezoid-shaped date window sits at the 6 o’clock location and displays a color-matched date wheel with black printing to match the minute track and text on the dial. 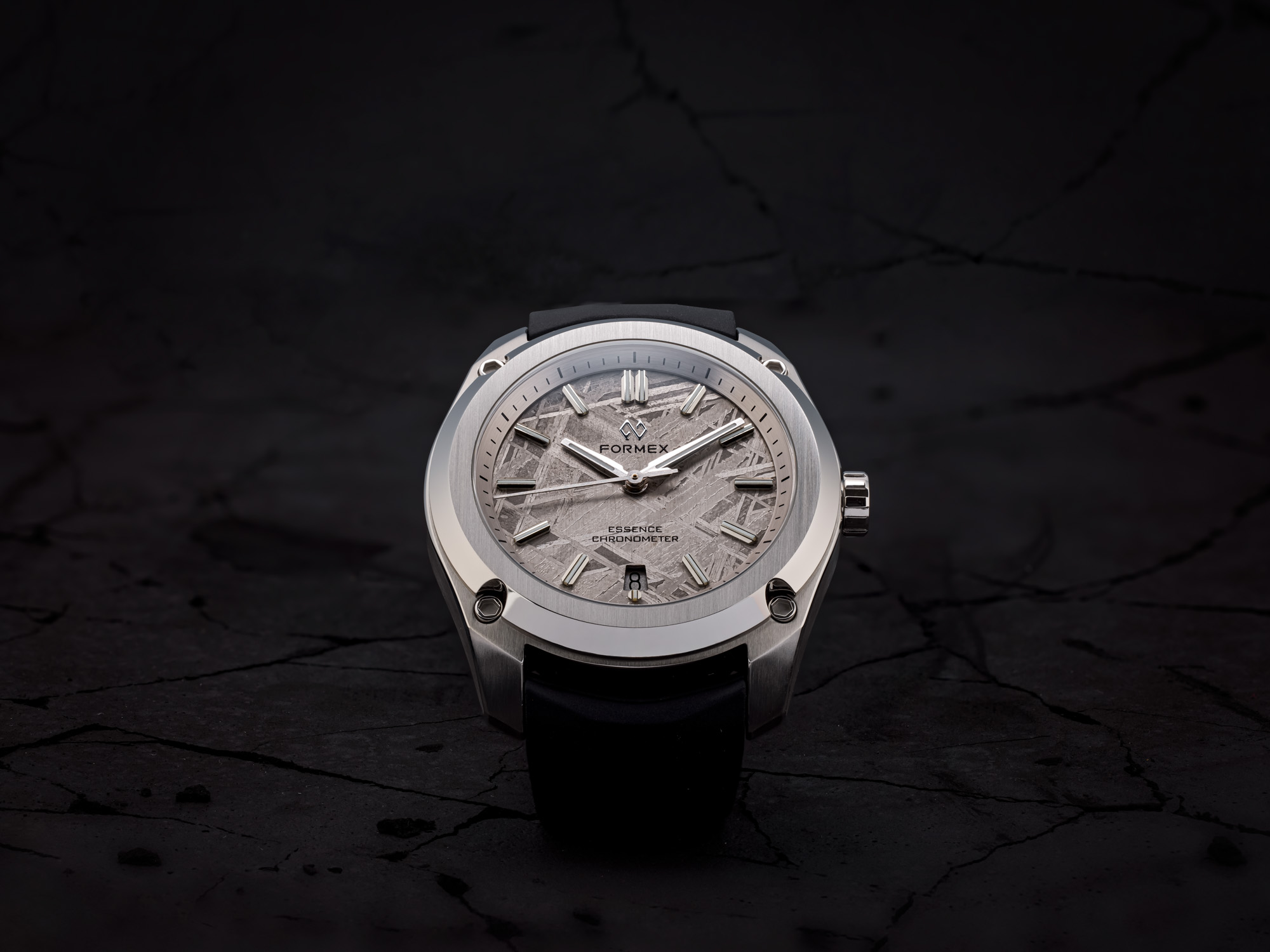 Powering the pair of new Formex Essence 39mm and Essence Leggera 41mm Space Rock watches is the COSC chronometer-certified Sellita SW200-1 automatic movement. While the base-level Sellita SW200-1 is very much a known quantity within the industry, Formex opts for the chronometer-grade version of this movement, which is the highest level that Sellita produces, and it includes a number of premium components that are not present in the standard version of the SW200-1, such as a Glucydur balance wheel, which is highly resistant to deformation, magnetism, and corrosion, along with additional decoration, such as blued screws, perlage on the plates, and Formex’s custom skeletonized rotor. That said, the specs of the Chronometer grade Sellita SW200-1 will be familiar to those who have experience with this highly popular design, and the movement runs at a frequency of 28,800vph (4 Hz) with a power reserve of approximately 41 hours. Given that this movement is COSC-certified, timekeeping performance is guaranteed to -4/+6 seconds per day, and due to its ubiquitous design, maintenance and service will be easy and painless down the road. 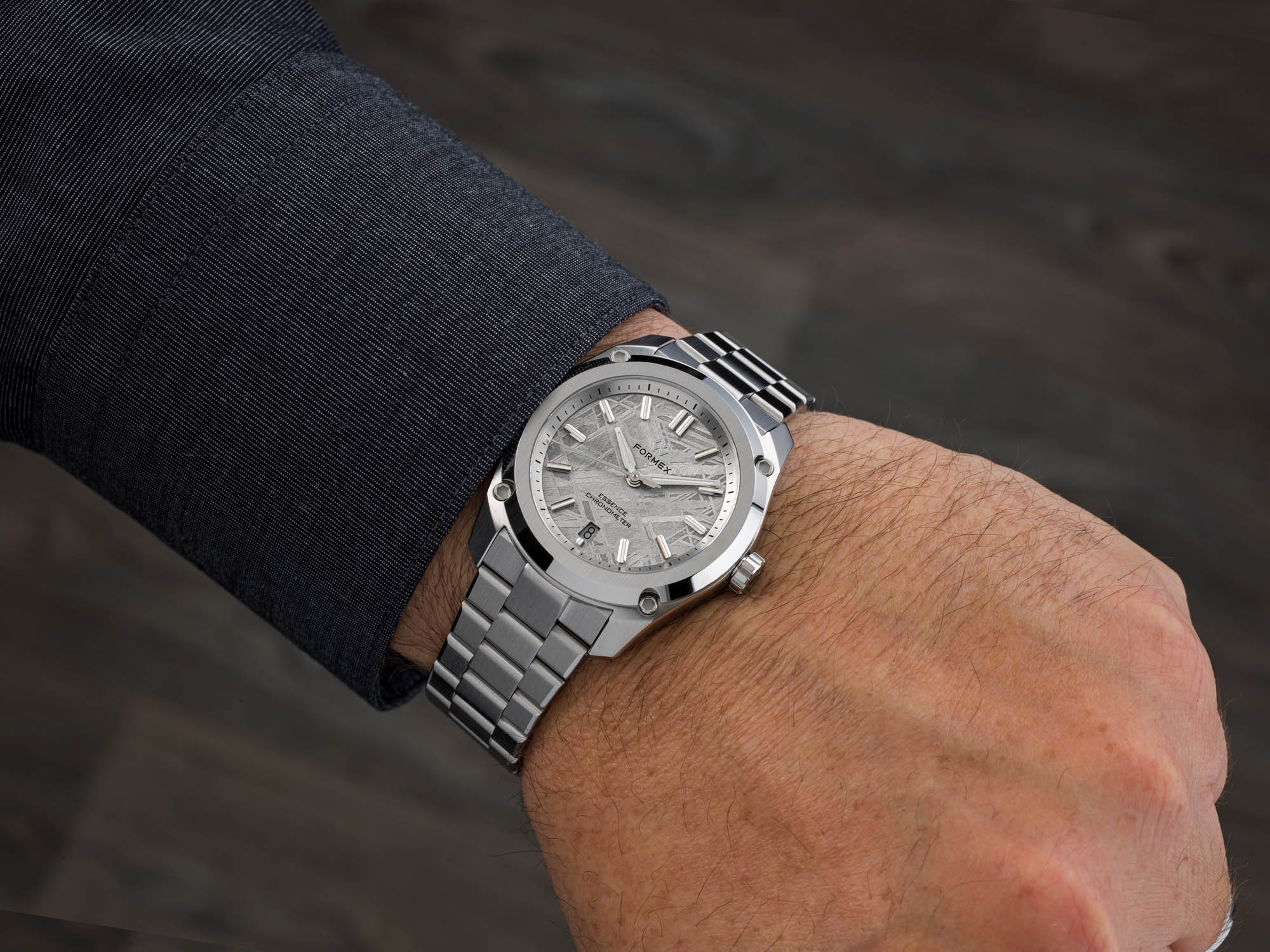 Just like the rest of Formex’s modern lineup, the new Essence 39mm and Essence Leggera 41mm Space Rock watches feature quick-release strap systems and are available with a wide variety of different options. Both models are offered with a number of different rubber or leather straps, while the 41mm Essence Leggera version is also available with nylon straps, and the 39mm stainless steel model comes with the option of a matching stainless steel bracelet. All of the straps (except the NATO-style option) feature Formex’s carbon fiber deployant clasp with an incremental fine-adjustment system, while the stainless steel bracelet for the Essence 39mm model includes completely solid links with a screw-in design, plus a new 1.5 link for additional sizing options and a machined clasp that also features a micro-adjustment system built in, which provides the same range of sizing options as Formex’s rubber, leather, and fabric straps. 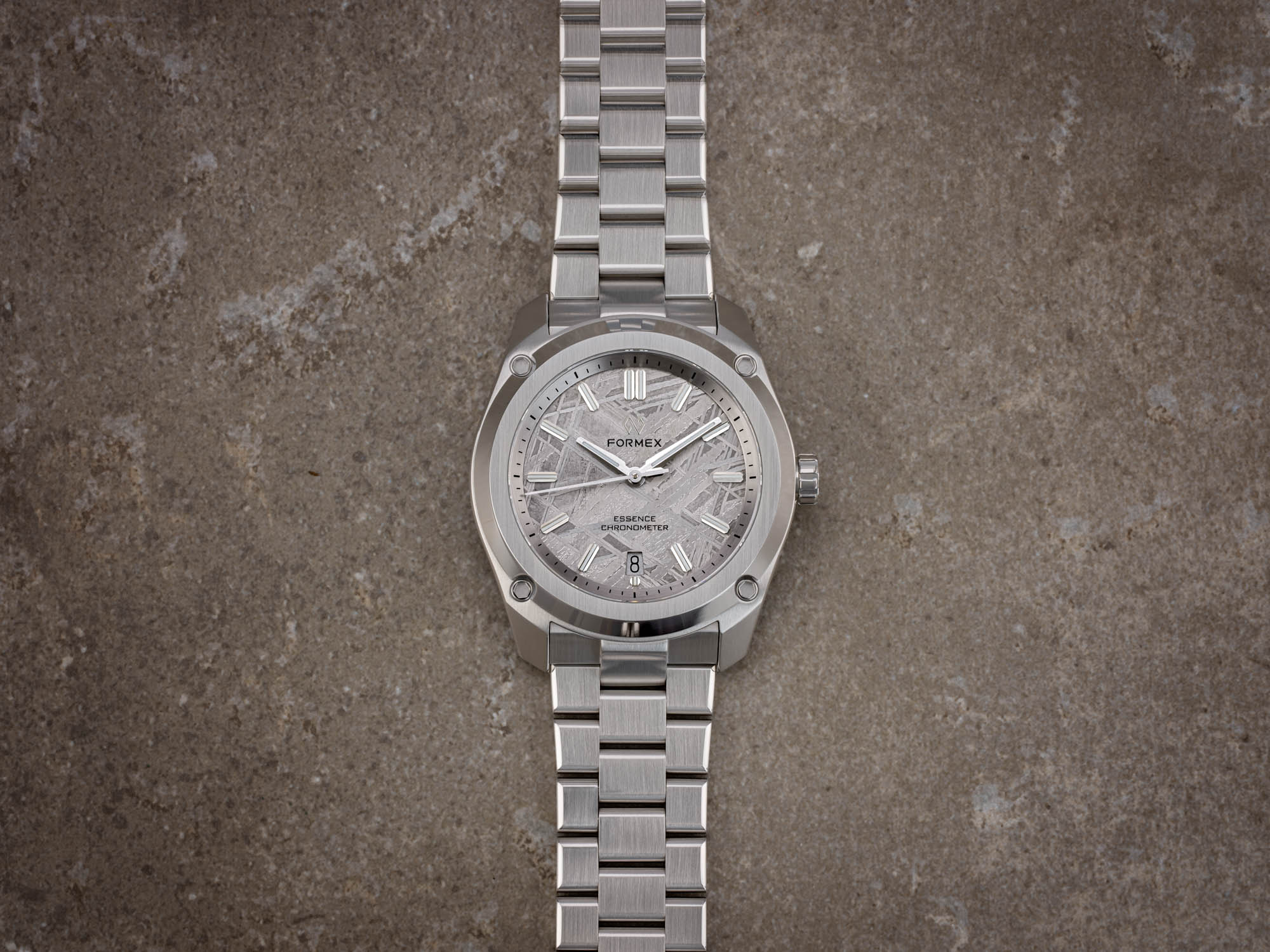 Despite their premium dials, the new Formex Essence 39mm and Essence Leggera 41mm Space Rock watches only represent a small premium in price compared to their standard dial counterparts, with the official retail price of the Essence ThirtyNine Space Rock starting at $1,650 USD, while the Essence Leggera FortyOne Space Rock is accompanied by an official starting retail price of $1,850 USD. That said, given that this is still less than a $300 premium compared to the standard-production models, even if you opt for the more expensive Essence Leggera model and then choose its most expensive strap option, you are still looking at a final price of less than $2,000, which seems quite reasonable when you consider that you are getting a carbon fiber and ceramic watch with a chronometer-certified movement, plus the Essence collection’s unique case suspension system. Given that the previous meteorite-dial Formex watches from 2020 and the recent malachite dial version of the Essence ThirtyNine that was released earlier this year all sold out within just a few days, I wouldn’t be surprised if the 88 examples available for each of these two new Space Rock models were claimed rather quickly, too, especially considering that they cost negligibly more than their standard-dial counterparts. For more information, please visit the brand’s website.