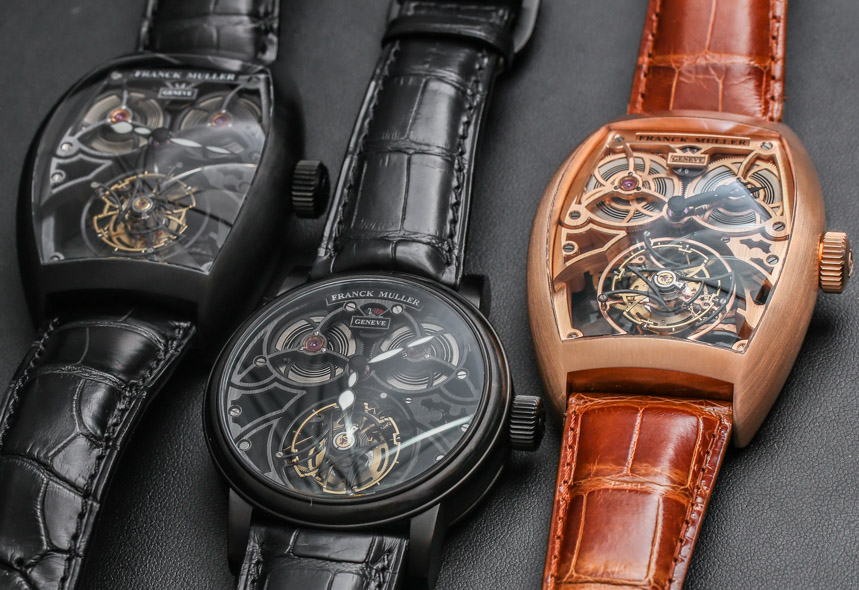 Franck Muller is an independent watch brand founded in 1991, meaning that the brand is 25 years old this year. Over the years, they have have amazed enthusiasts and collectors with their bold and brash watches and collections. The early part of this decade was arguably the brand’s most fertile period. Longtime watch enthusiasts will surely remember the launch of the bonkers Aeternitas Mega 4 in 2010, a super complicated watch that has 36 complications and over 1,400 components. And a year later, it was followed by its attention-grabbing Giga Tourbillon watch. Even today, the Franck Muller Giga Tourbillon watch still boasts the largest tourbillon mechanism in any wristwatch, so let’s take a closer look at some of them here. 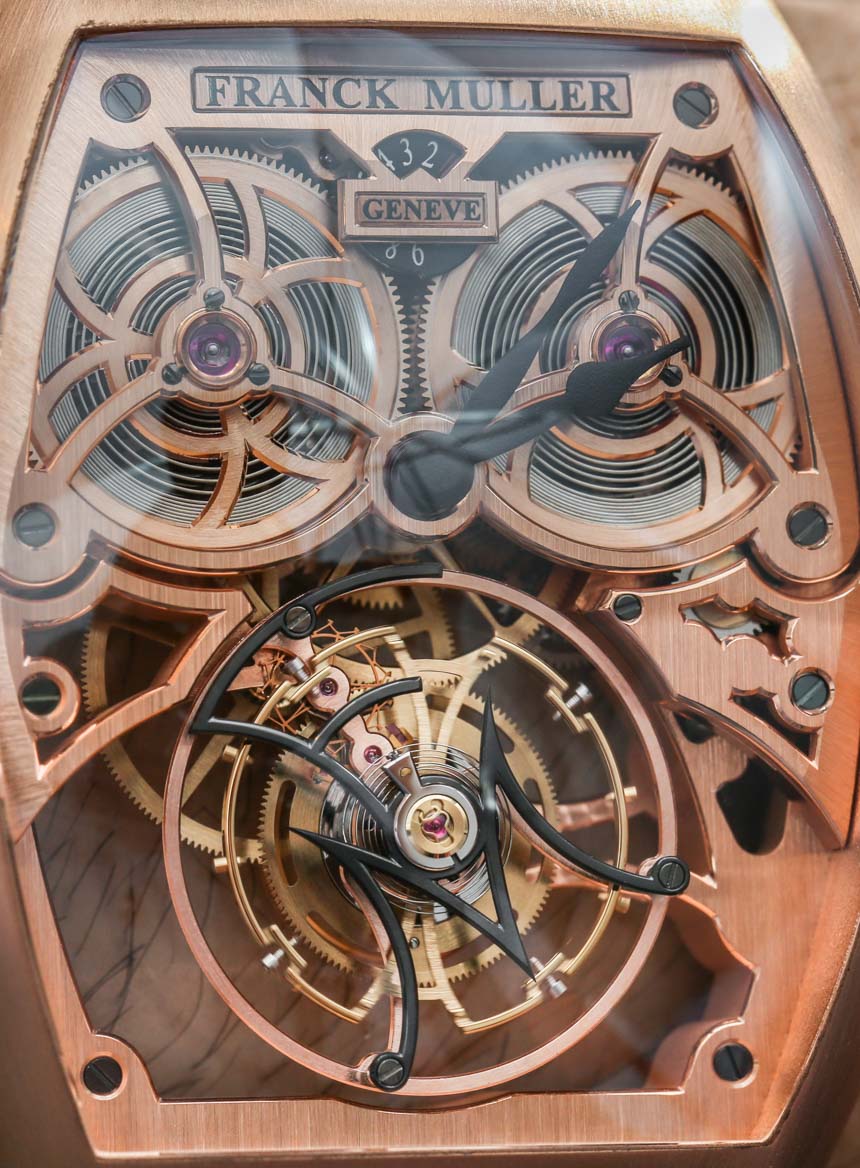 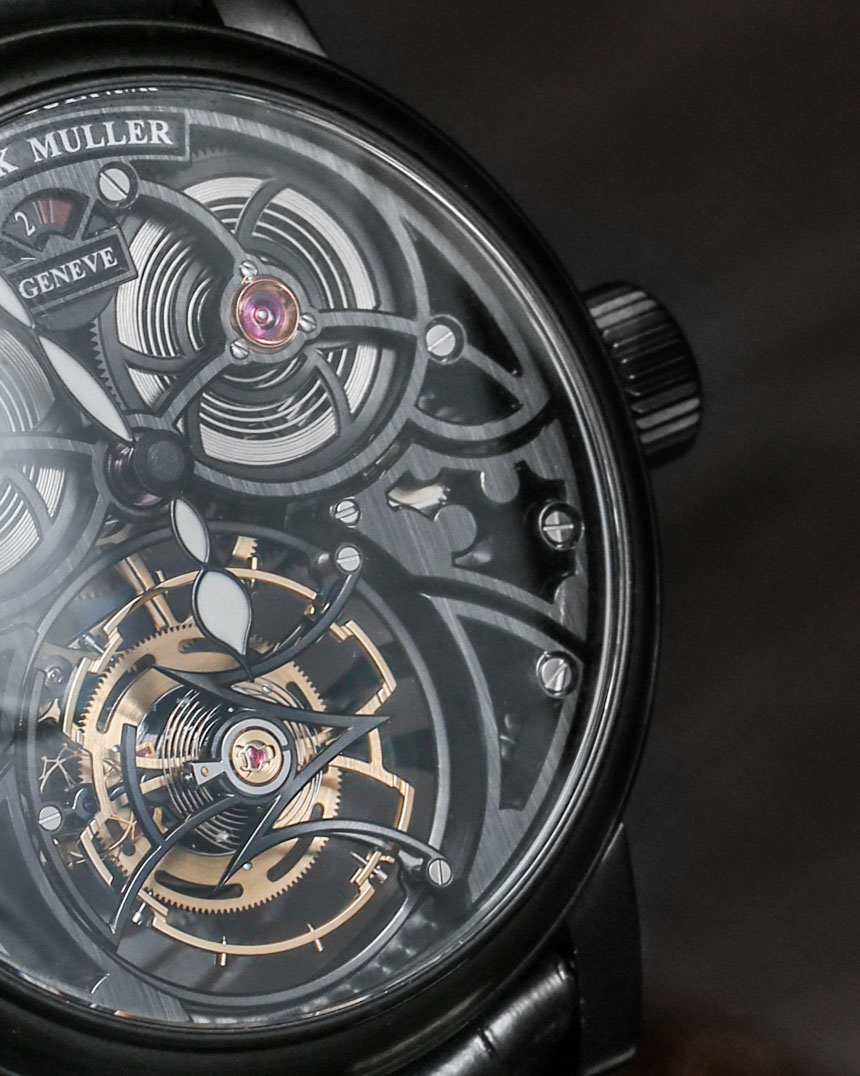 Franck Muller released the first of its Giga Tourbillon watches in 2011, and it was designed to be a showcase of the brand’s expertise in movement design and manufacturing. The Franck Muller Giga Tourbillon is so called because of its large tourbillon mechanism, of course. And in case you were wondering, the tourbillon cage measures a whopping 20mm in diameter. That’s nearly double the size of most tourbillons found in other watches, and nearly half the diameter of many watches! Also impressive is how the tourbillon cage is marked with the brand’s initials, FM. 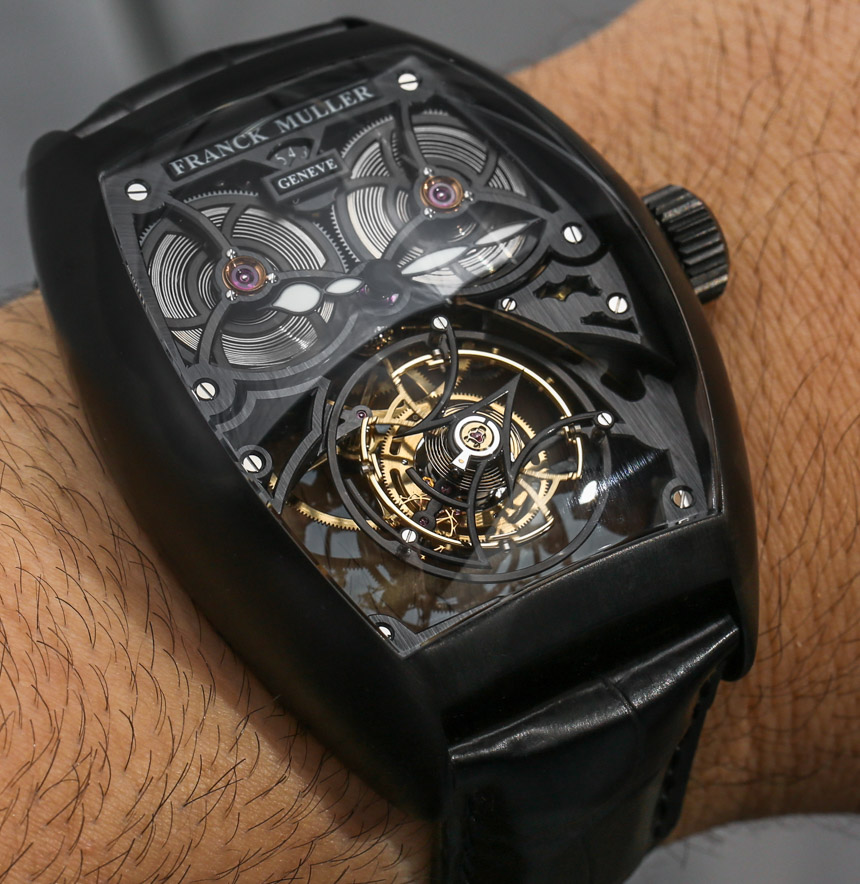 It’s a stunning achievement, especially when you consider the amount of energy that is required to animate a tourbillon of that size. To accomplish this, Pierre-Michel Golay, the master watchmaker at Franck Muller, decided that he had to fit no fewer than four barrels into the watch. Not only that, the barrels had to be larger than conventional ones, and in the end they measured over 16mm in a diameter, almost rivaling the diameter of the tourbillon itself. Eventually, the four barrels were connected in series and it gave the movement a resultant power reserve of 240 hours, or 10 days, which I think you will agree is impressive considering the substantial size of the tourbillon. 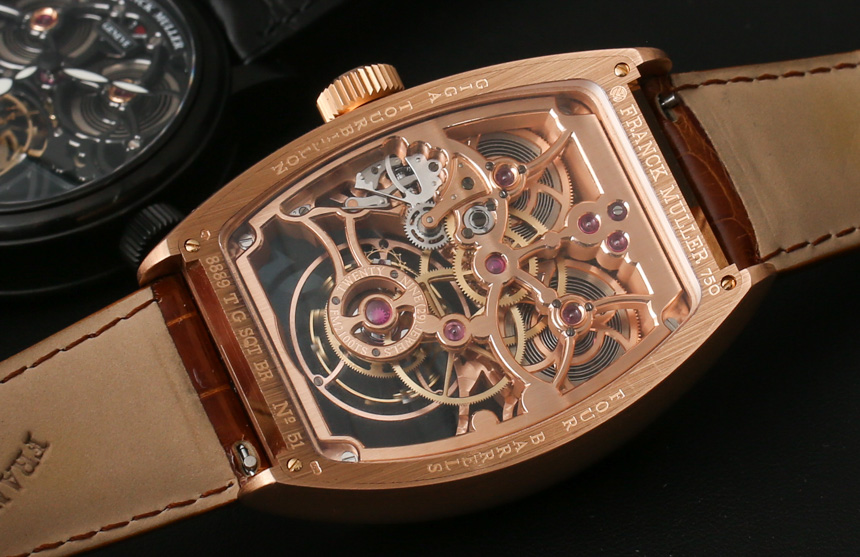 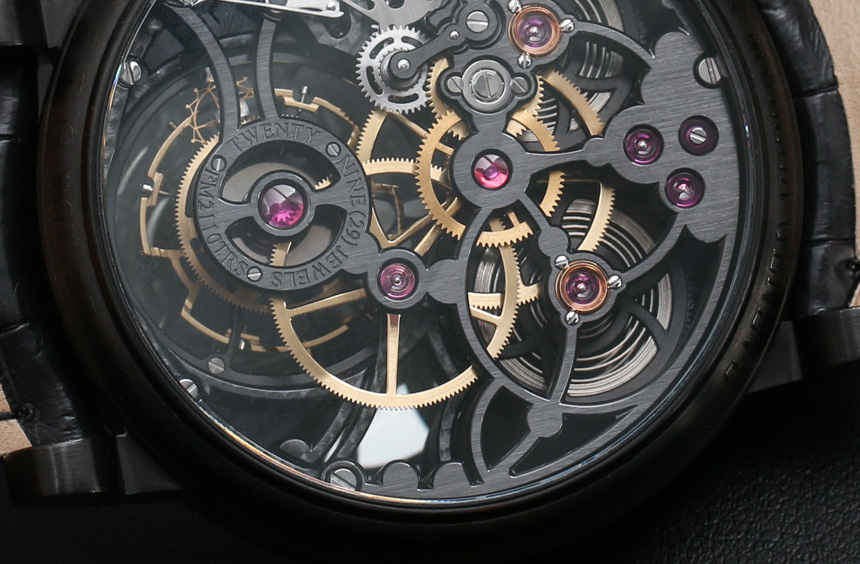 The Franck Muller Giga Tourbillon movement is christened the FM 2100, and it is made out of 240 components, 29 jewels, and it beats at a leisurely 18,000 vibrations per hour. It has been skeletonized so as to show off its inner workings, and to make it even more impressive, the movement is actually mounted in reverse. This means that the winding mechanism is behind and the bridges are in front. All the better to show off the movement’s design and finishing. And as you would expect, all variations of the FM 2100 caliber have been finished to a high standard with features like brushed finishings on the bridges, chamfered edges, and polished screw heads. 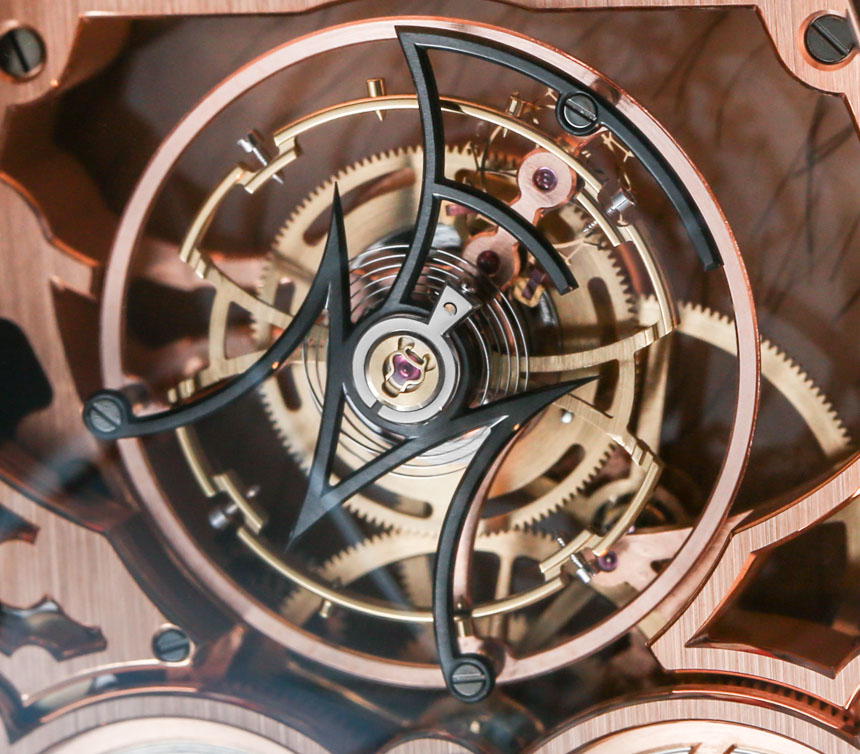 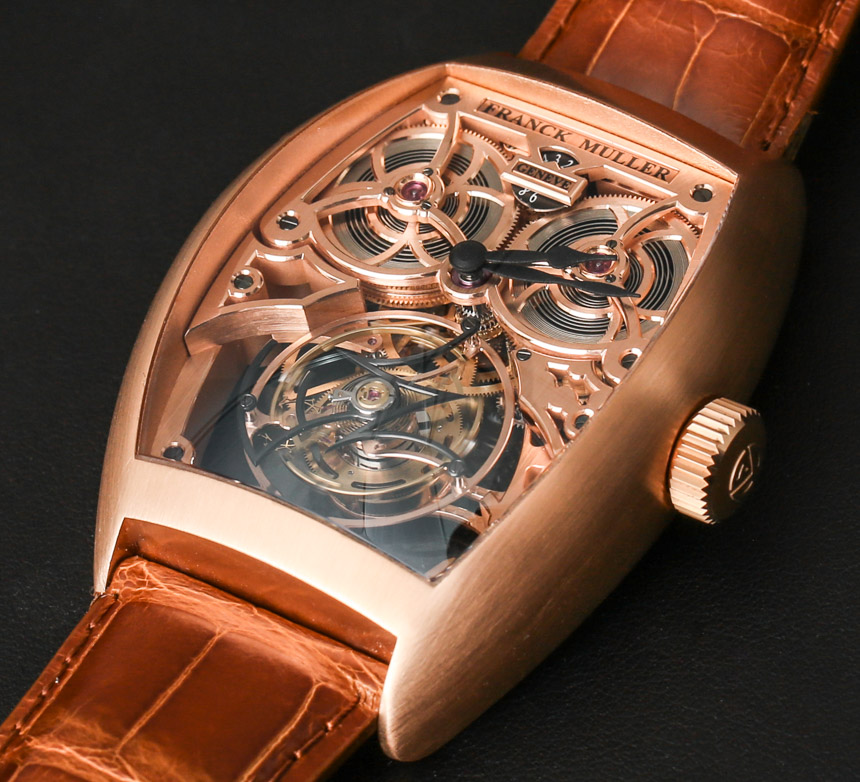 The end result is a truly impressive and imposing-looking movement. And this is made even more so when it is housed within Franck Muller’s signature Cintrée Curvex tonneau-shaped case. This brings me neatly to the first watch I want to highlight here, the reference 8889 T G SQT BR5N.

Though it’s just one of the many variants of Franck Muller Giga Tourbillon watches that the brand puts out, it’s also one of the most beautiful. That’s down to the harmonious use of materials and simple color matching. You see, the reference 8889 T G SQT BR5N has an 18k rose gold case, matched with a rose gold movement, and a honey brown alligator strap. The hands are rendered black to add contrast and improve legibility (it is a skeletonized watch, after all), and so are the FM initials on the tourbillon cage. 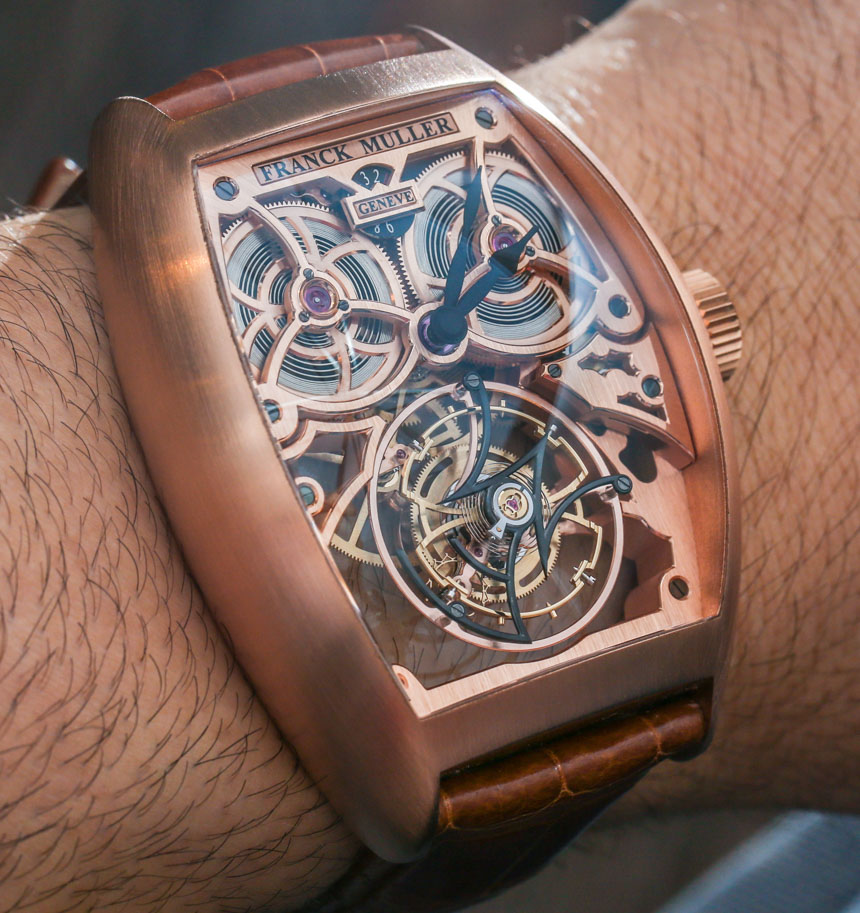 On the wrist, the Franck Muller Giga Tourbillon reference 8889 T G SQT BR5N strikes a remarkable presence, thanks in part to its impressive size and its fine construction. It measures about 44mm wide, which is pretty moderate by today’s standards, but it’s nearly 60mm tall and 14mm thick. Add to this its curved contours, massive curved sapphire crystal, bright rose gold case with brushed finishing, and the large, exposed, and well-finished movement within, and the watch almost demands to be noticed. 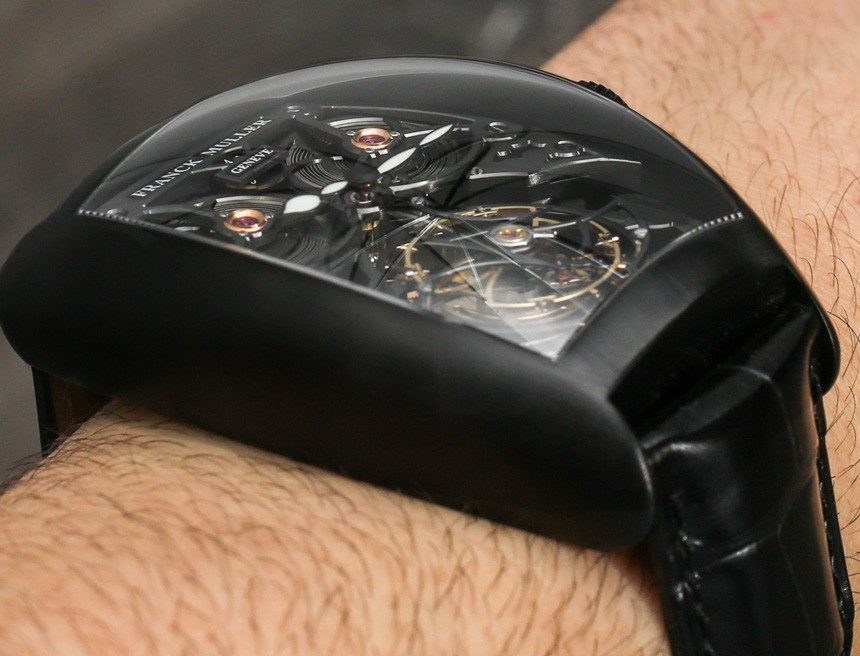 If you prefer something that’s more low-key, there’s the Franck Muller Giga Tourbillon reference 8889 T G SQT BR NR. It is essentially the same watch as the aforementioned reference 8889 T G SQT BR5N, but comes in a brushed black PVD stainless steel case. It’s definitely less flashy, but I also find it harder to read as the hands are coated with white luminescent material and do not offer much contrast against the silver of the mainsprings directly underneath it. That said, the black PVD movement is quite a sight to behold. 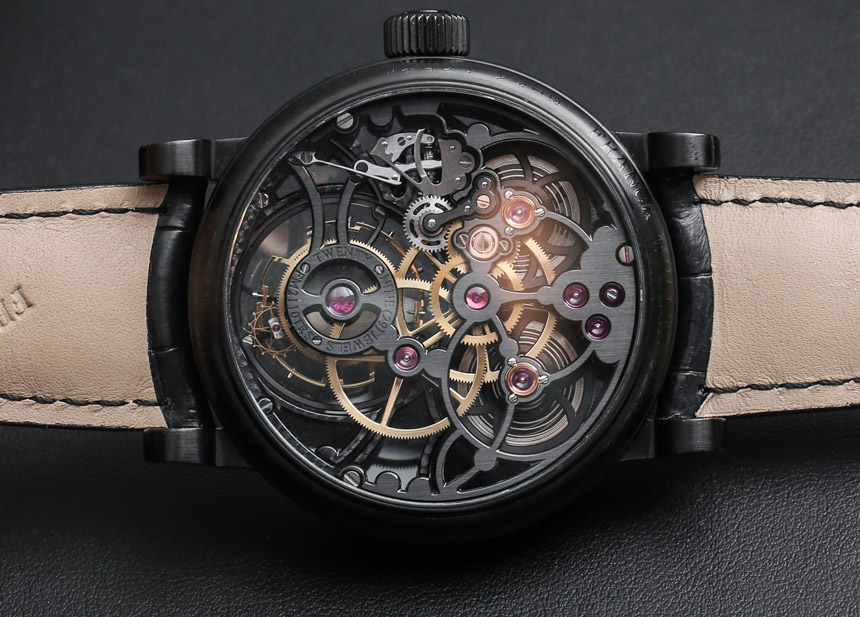 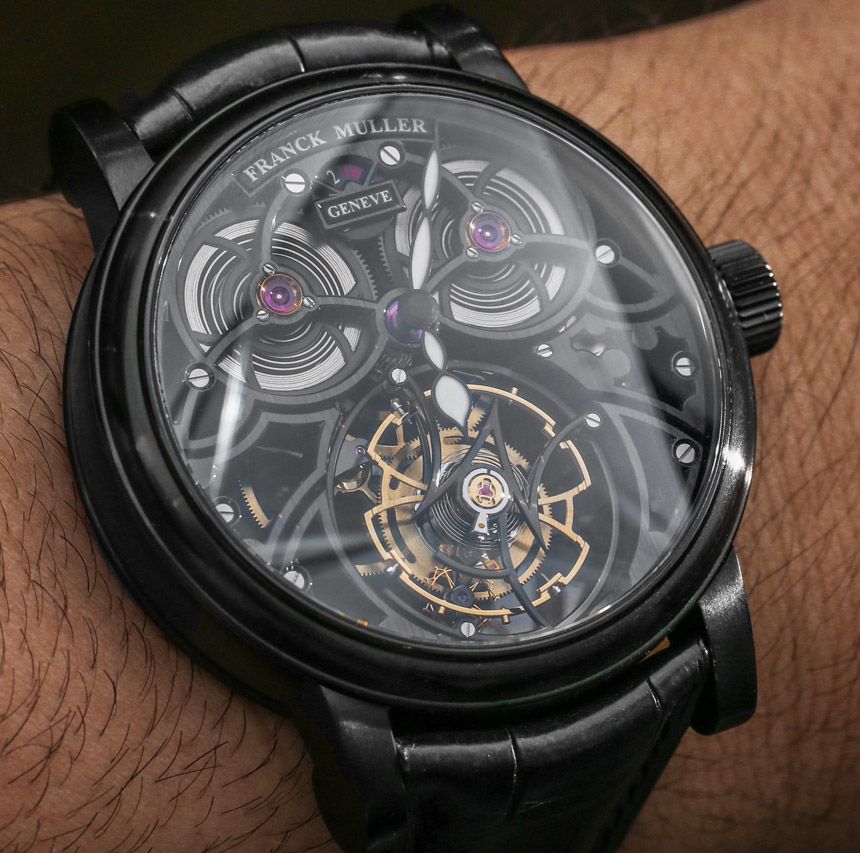 The Round Giga Tourbillon that we have here is the reference 7048 T G SQT BR NR, which is really just the round version of the earlier reference 8889 T G SQT BR NR. Because of its more traditional round case, the Franck Muller Round Giga Tourbillon is also less chunky on the wrist, and is slightly more wearable than the Franck Muller Giga Tourbillon with the Cintrée Curvex case. This watch features a brushed black PVD stainless steel case with matching black PVD movement. Again, legibility is somewhat compromised because of the use of black PVD hands with white luminescent material. It simply does not provide enough contrast against the twin mainspring barrels. 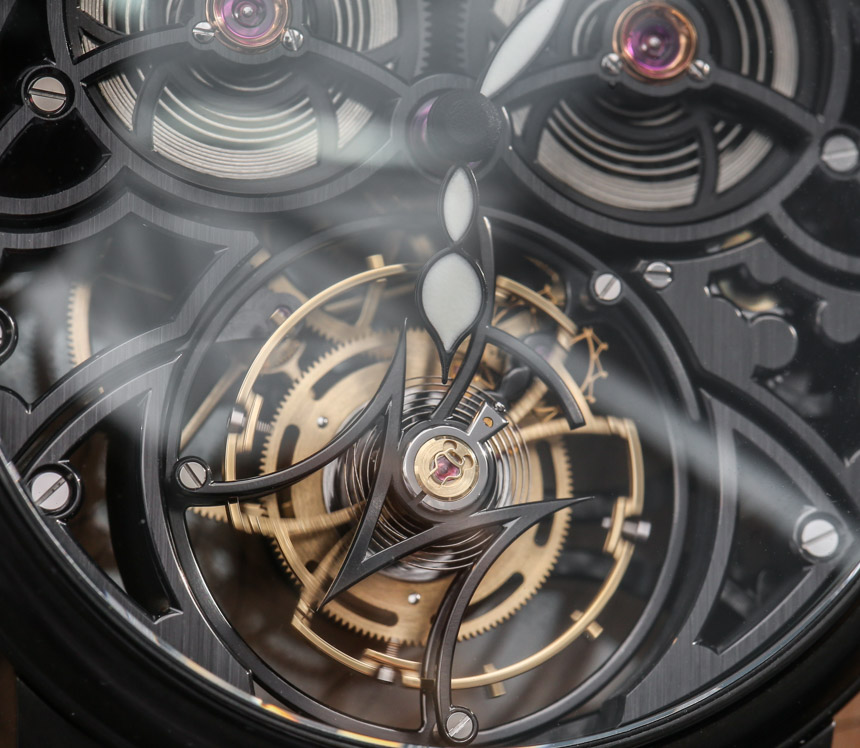 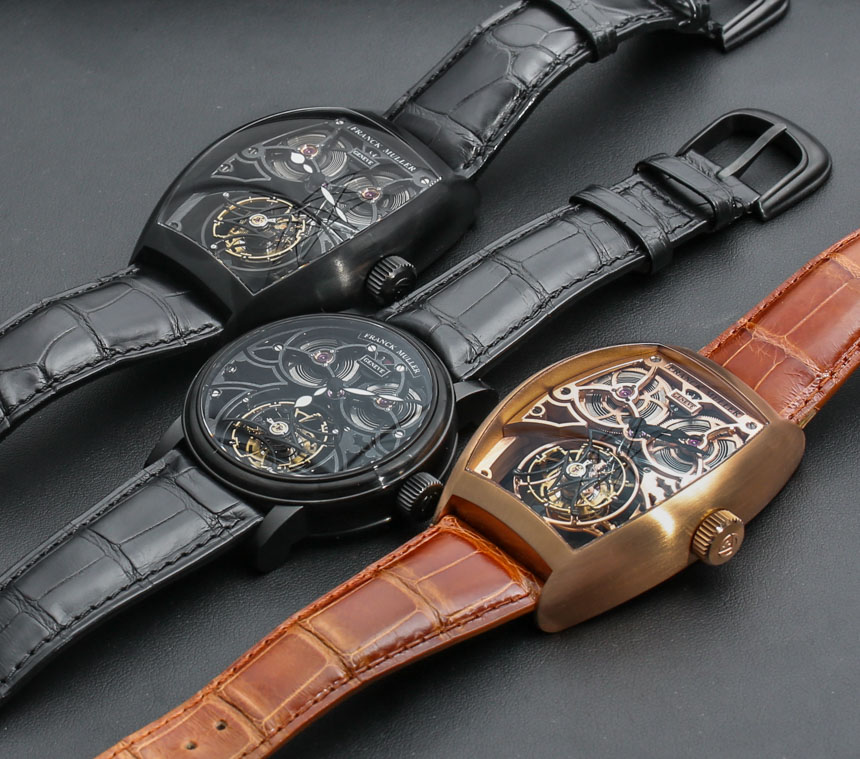 Franck Muller’s Giga Tourbillon watches, whether in the more distinctive Cintrée Curvex case or a more traditional round case, are certainly very eye-catching watches. The immensely large tourbillon, which takes up nearly half the entire watch’s volume, simply screams for attention, leaving bystanders in no doubt that you have something that’s very unusual and special on the wrist.