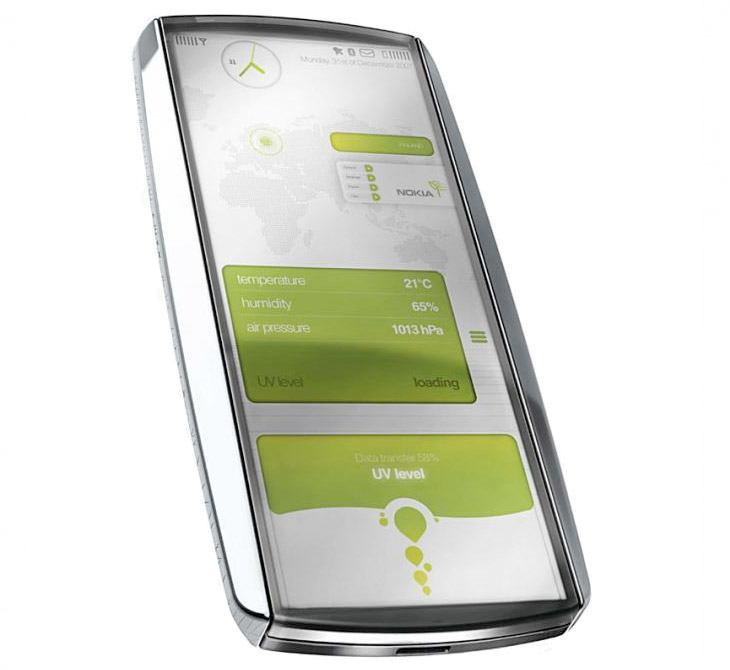 We usually stay away from far-fetched tech concepts, because it is never a good idea to make one salivate with news of something that might never become attainable. In this instance however, it is probably safe to say that such a device is within our grasp in the next ten years max. The Nokia Eco Sensor Concept brings about the functionality that Star Trek and all science fiction fans have desperately awaited. Namely, a convergence device that functions as a watch, communication device, health monitor, and environmental senor, all in a cool-looking touch screen form factor.

While it is unclear whether this is a functioning concept, it uses available technology in realistic ways. From a time telling standpoint, the Eco Sensor merely utilizes available digital technology with GPS to tell the time in the right place. It uses various on board sensors along with the GPS to determine environmental conditions. There are plenty of watches today that use this technology, such as Suunto, which makes amazing “wrist-top computers” combining a watch, compass, altimeter, thermometer, and barometer, all in a neat and attractive little package. Further, companies like Suunto, among others, have been able to implement a number of sensors, such as heart rate, and body heat monitors into a watch. Thus, most all the technology that makes the Nokia Eco Sensor desirable is already in watch form in some way or another.

You might be asking yourself what the point of the Nokia Eco Sensor Concept is all about. Don’t confuse yourself with thinking that this is just another pointless “do it all device.” Far from it, it encapsulates the tools each person will need and come to expect. As mobile phones become a more permanent part of our overall daily “luggage,” so are the other functions those devices provide. Even now, people are becoming accustomed to their phones providing e-mail, text messaging, cameras, and Internet navigation. A phone that is just a phone does not cut it anymore. Soon, we will come to except a phone to tell us what the weather is going to be like, what our blood pressure is, and of course we want it to fit on our wrist.

The detachable quality of a mobile phone is what makes them something disconnected enough to be forgotten or under utilized. Like the watches we wear today, a mobile device on your wrist will truly become part of every ensemble. It will function much like today’s mobile phones as a device on your wrist is close enough to your hand, it will be the same action, but it will look like our hand it empty, and we will of course still use wireless headset’s like today’s Bluetooth headsets.

Because almost all the technology exists in some form or another already, the Nokia Eco Sensor Concept is not that far off from reality. Notice that it can be worn in several ways, but one of them is a a watch, on the wrist. That is the most exciting part of course. So while a digital computer watch is not going to steal the hearts of die hard mechanical watch enthusiasts, it is a sign of things to come. Even the vast amount of functionality that the Nokia Eco Sensor provides will seem limited in the years to come as watches are as well connected as any computer is today.