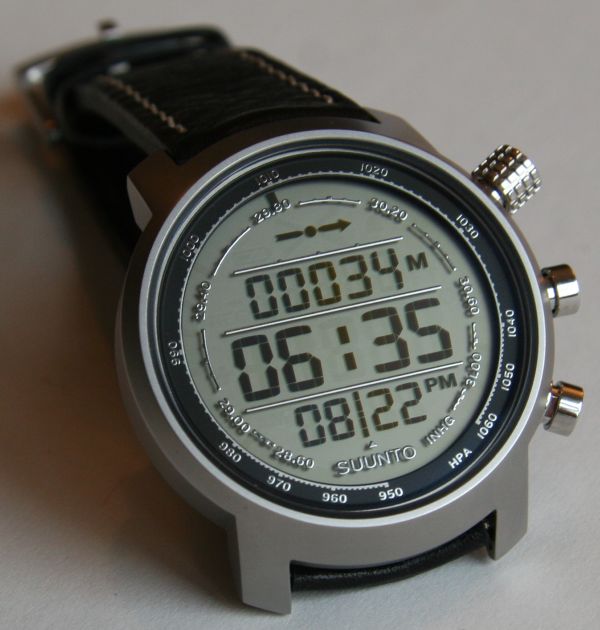 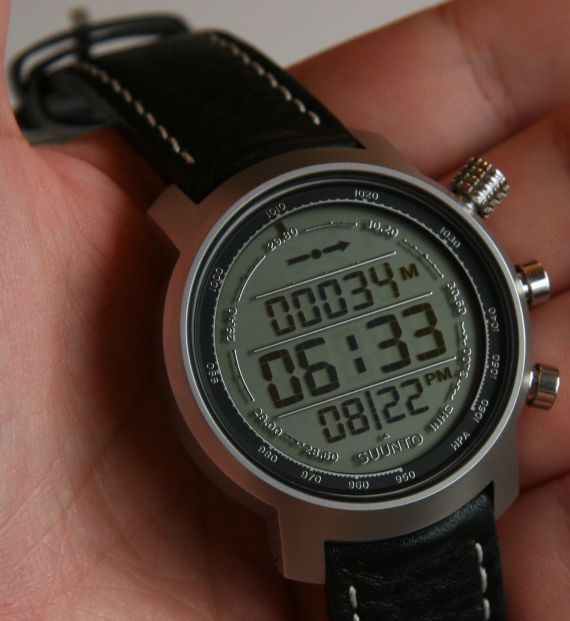 Every time I run into someone wearing a Suunto watch, I can’t help but ask them how they like their watch. Often times I catch them off guard. Before a “hello,” I just spew out, “how do you like your (Observer, X-Lander, Elementum, etc…).” Usually they take a moment to process what I am asking them, until they finally respond with something positive. What I find interesting is that many Suunto watch owners I’ve met have a collection of watches that include pieces in the several thousands of dollars. Still, I don’t see them wearing their Breitling, Rolex, or IWC, they have their Suunto on.

The Suunto Elementum line is a new more luxurious line from the “wrist top computer” brand. The Terra is my second Elementum model, as I previously reviewed the Suunto Elementum Aqua watch here. The theme of the Elementum watch line is interesting – it breaks away a bit from the main functional line for which Suunto has a large existing fan base. The Elementum line is more expensive and uses higher quality components that most of the models, but also represents something a bit different  – simplicity. The Elementum watches are arguably much easier to use than the other Suunto models. Not that those other watches are difficult to use, but rather that the Elementum watches feature what I like to call “functional simplicity.” The watches do just a few things, and try to do them effectively and simply. This means that after just a few minutes playing with the Terra watch you’ll get the hand of how to use all of its functions. Suunto opted for broad functionality over inaccessible functionality. 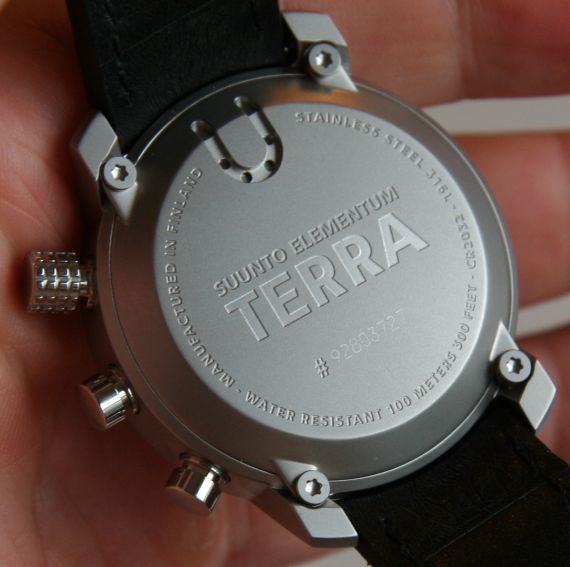 Having said that, the Elementum Terra incorporates a handful of useful functions that are all quite easy to use. Actually that leads me to my biggest complaint about the watch. I think Suunto feels that the functions are so easy to use that it neglects to tell anyone about how to use them. The watch comes with a thick instruction manual. It looks promising, but once you look at it, you realize that instead of being thorough, it is just in a ton of different languages. There is no real guide in how to use the watch, not even really a guide discussing all the watch’s functions. So while the watch is great and simple to use, for the cost of the watch, I think Suunto could take a lesson from Casio (who makes some almost comically intense guidebooks for their watches).

So let’s discuss what the Suunto Elementum does. It has two sensors in it. A pressure senors an electronic compass. The pressure sensor (as seen on the back) has a dual purpose of giving the barometric pressure and altitude data. The main screen of the watch shows the time, date, altitude, and barometric pressure trend and reading all the time. I find that this is nice. Most of the watch’s main functions are always right there for you to see. The compass can be accessed at a push of a button. The barometric pressure scale turns into a pointer for North, and the watch dial reads out the degrees you are pointing in. The watch also features an alarm and simple chronograph. The chronograph measures 1/100 of a second for a minute, and then after that measures up to 99 minutes (not 100% sure of the max chronograph time as I never went that far). 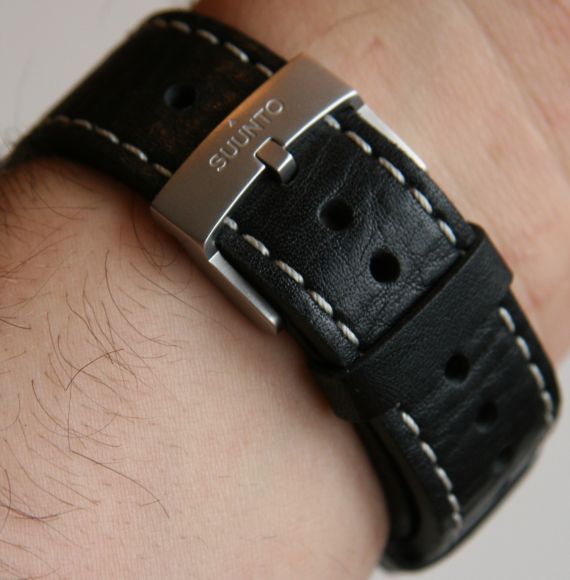 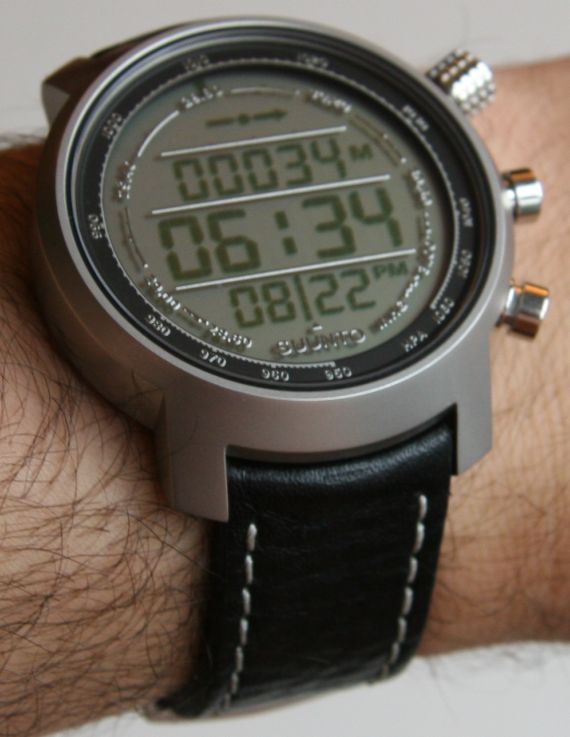 The watch also has two timezones. You can switch between the two relatively easily. You also get a nifty logging function for the altimeter. It tells you how long you have been climbing and how much altitude you gained. The logging features helps you look over your climb. Keeping with the simple nature of the watch, there is no seconds indicator on the dial. The watch case is steel in an almost sandblasted look. It is almost the same as that on the Elementum Aqua, but has an additional pusher. The top pusher is the cool job dial that I really like a lot on the Elementum line. Use it to access the chronograph, and climbing meter. When accessing the functions, the beep the watch makes have a nice volume and is substantial. Not a weak beep at all. There is also a bright backlight for the watch. Just push down the middle pusher for a couple of seconds to activate the entire screen illuminating green glow.

The high quality feeling steel case is 44mm wide with a 24mm wide 21mm leather strap. The available metal bracelet is thicker, and there are also a few styles of rubber strap available. I tested teh Suunto Elementum Auqa on the metal bracelet that I liked, and the leather strap on this model is equally nice (nice signed buckle as well). Like all models in the Elementum line, the watch is water resistant to 100 meters. The bezel is different than that on the Aqua, being thinner and without the screws in it. This makes the dial look bigger. This model has a standard LCD screen. I tend to like negative (reverse) LCD screens such as the one I had on the Elementum Aqua, but I have to admit that this is one of the most beautiful and clear LCD screens that I have ever seen. I don’t think and LCD screen can get any more crisp than this. It also helps that the crystal is sapphire. If you’ve had Suunto watches in the past, but not an Elementum, you’ll be impressed with the step up in quality and construction here. Not that Suunto was lacking before, but this is a new level of luxury for Suunto.

To replace the battery in the watch you need to unscrew the hour Philips head screws in the back of the watch. Suunto uses the very popular CR2032 battery that is widely available. That means you don’t need to look much further than a drug store for a new battery. No more overpriced trips to the watch store or getting something questionable from China when the battery power goes out. In my experience, Suunto watches go for about 2 years on a battery. The dial should have a low battery indicator as well.

Suunto fan purists will be pleased to know that the Elementum line of watch is made in Finland, the home of the brand. This is just where you want the watches to be made – as the quality will be the best for your money. You want your Volkswagen built in Germany right? Not Mexico. Same idea. Prices for this luxury Suunto watch are in the same range as the Elementum Aqua. Retail for the Elementum Terra is $899 – $1199. An expensive proposition, but you’ll quickly justify the price when you compare the quality of this timepiece to similar ones out there with the same functionality. With the Elementum watch line, Sunnto has take the multi-sensor watch to a new status level.