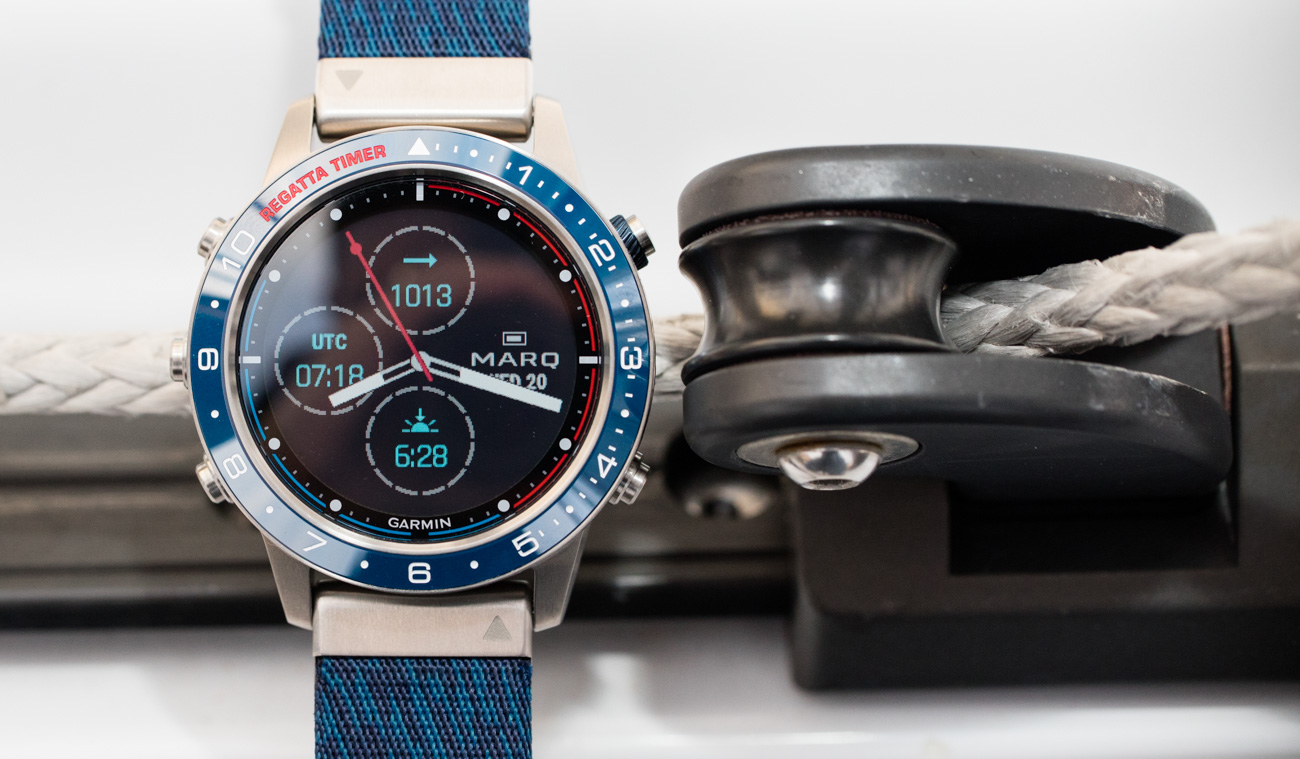 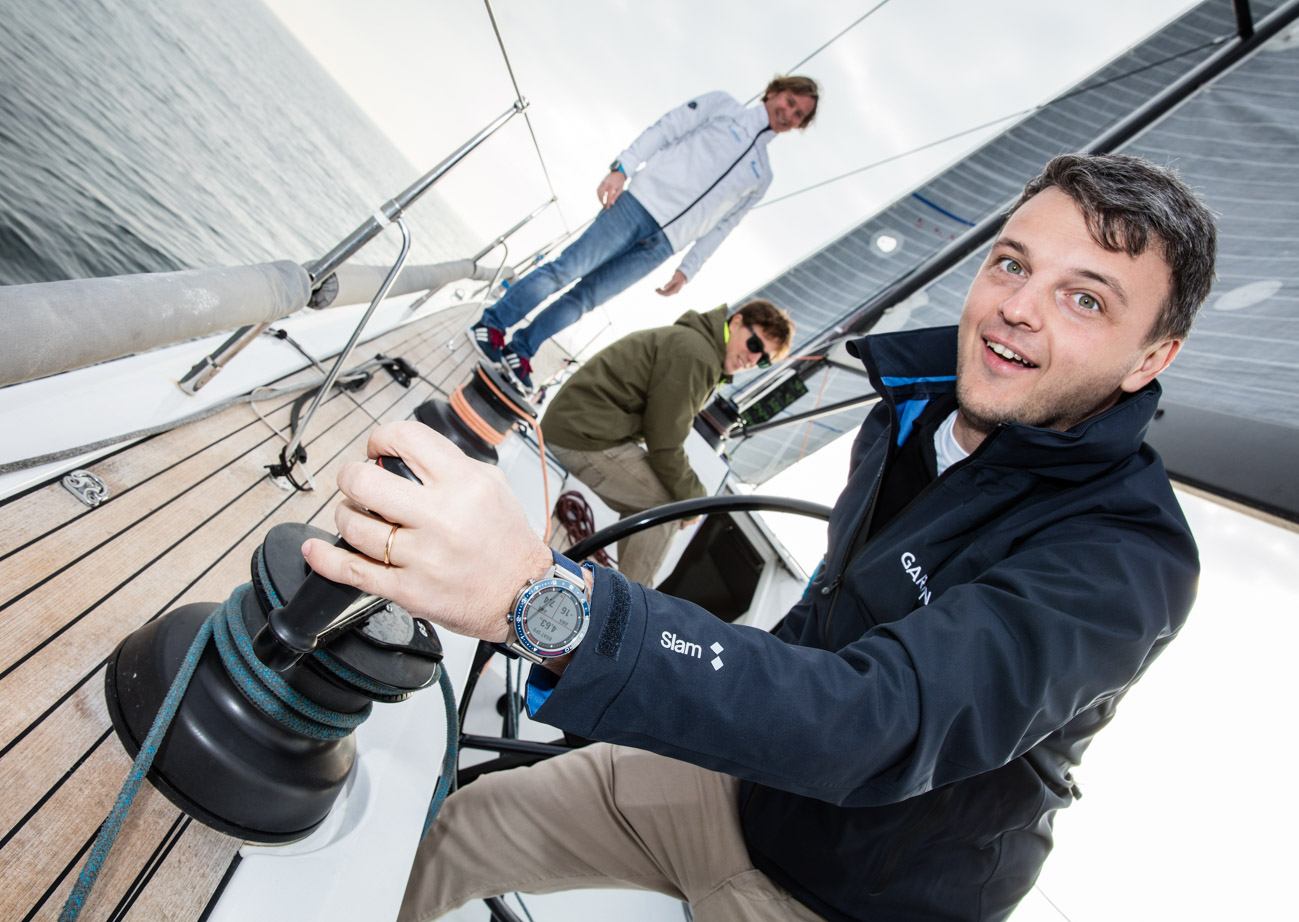 U.S.-based GPS and hardware technology company Garmin has been in the wrist watch market since 2003, innovating in the wearable GPS space and being able to rightly say that it helped usher in the modern era of smartwatches. Today, Garmin introduces the Marq family of high-end smartwatches that push new boundaries in terms of technology and form. Garmin has crafted five different Marq watches, each designated for a particular professional lifestyle. These professional lifestyles echo the core business units of Garmin, including aviation, boating, athletic competition, outdoor exploration, and adventuring and driving. The Garmin Marq GPS Smartwatch family of watches also presents a massive step forward in aesthetics and crafting for a Garmin product. Garmin isn’t new to the higher-end wearable space, but the Garmin Marq collection is now serious enough to compete with the look and feel of many more traditional luxury sport watches.

Like other serious technology companies such as Apple and Samsung, Garmin has not only been aggressively trying to capture a piece of the growing smartwatch market pie but is also playing catch-up to the traditional luxury watch industry. Last year, I discussed Garmin’s first serious entrance into the luxury watch space with my aBlogtoWatch review of the Garmin Fenix Chronos Smartwatch. The Fenix Chronos was built on the popular Fenix family with a more “premium” feel and packaging. Now in 2019, Garmin makes a massive leap forward with the Garmin Marq. Functionally, it builds on the Fenix family but improves upon it in most every way, including hardware, software, aesthetic design, and case/strap materials. 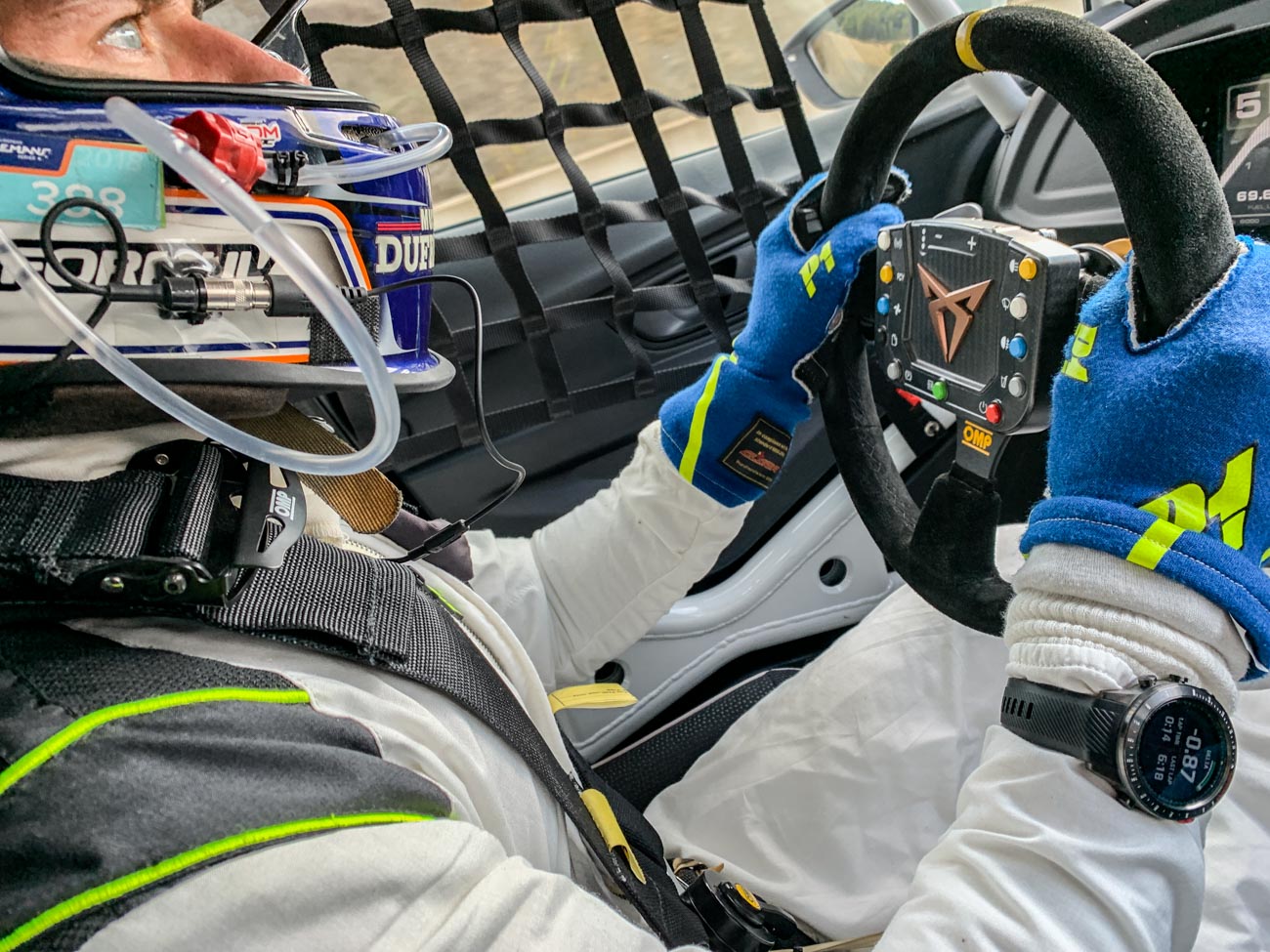 At the launch event of the Marq smartwatch, I posed a rhetorical question to some of Garmin’s team members, asking them why it was important that their timepieces look beautiful in addition to performing beautifully. The Garmin Marq is no toy, being designed for a series of authentic professional users, most notably athletes and adventurers, as well as sailors. But the story from Garmin really focused on how the Marq is produced from quality materials, with an intelligent and original design that embodies what Garmin feels is real artisanship. Why is it that they wanted to push this message so much? Garmin’s intelligent team could not readily respond because I don’t think they actually posed the question to themselves. As I said above, other companies such as Apple and Samsung have walked along similar paths, focusing on the perception of their products as much as the utility and functionality therein. This is a fascinating phenomenon to me. 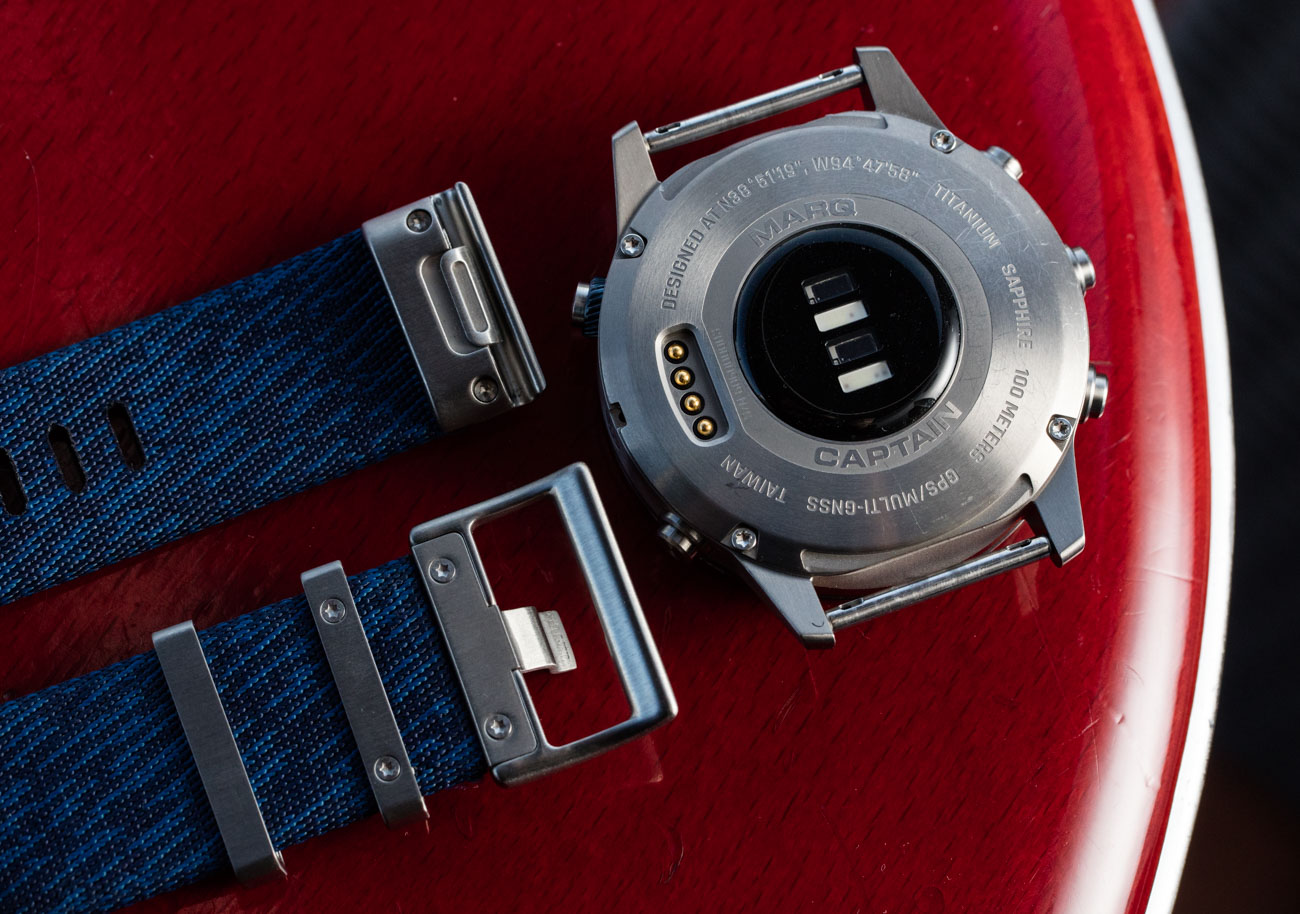 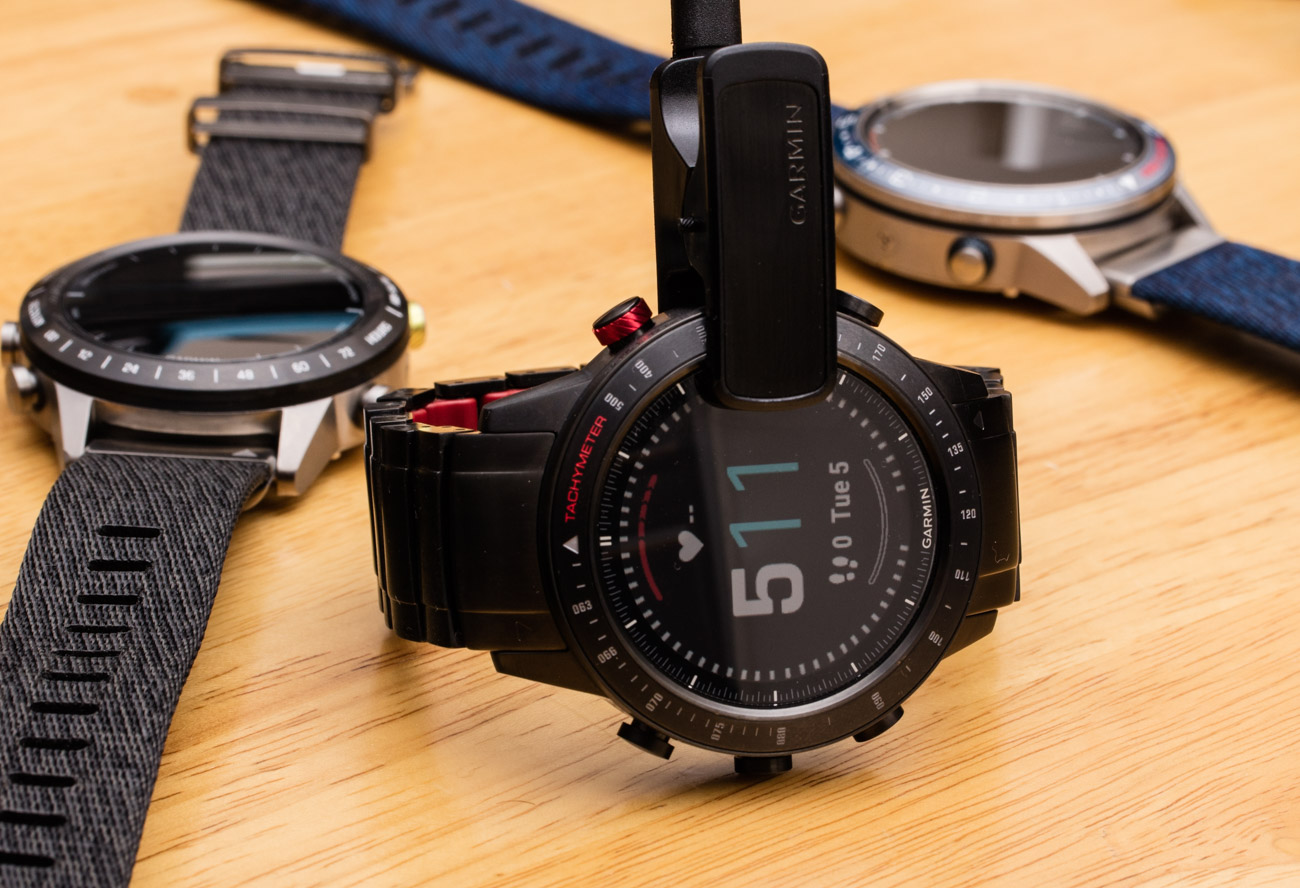 I believe the real answer to my question above is that Garmin and others want their products to be on par with the perception of traditional luxury watches, in addition to vastly exceeding historic timepiece functionality. It’s true that smartwatches are the contemporary manifestation of “tool watches,” which timepiece enthusiasts so heavily cherish. Garmin knows their products are good tools, but it also wants them to be pretty tools. Garmin’s team (perhaps even to satisfy their own legitimate vanity) wants to wear their products in all situations, including to dinner, business meetings, and leisure pursuits. It envisions a product that isn’t just worn during workouts and adventures, but at all times — just as watch enthusiasts are accustomed to doing while wearing diving and flying watches when not actively engaging in those pursuits.

There is a palpable trend for the most serious smartwatch-makers to catch up to the traditional luxury watch industry — and then probably exceed them. Recall that traditional watchmakers, for the most part, stopped solving mainstream consumer utility needs decades ago. Since the resurgence of the luxury watch industry in the 1990s, the goal has not been to offer the consumer a great time-teller, but rather a great status-indicator. How will consumers today respond when there are more and more products that do both (meaning they are great tools and great symbols of status and personality)? 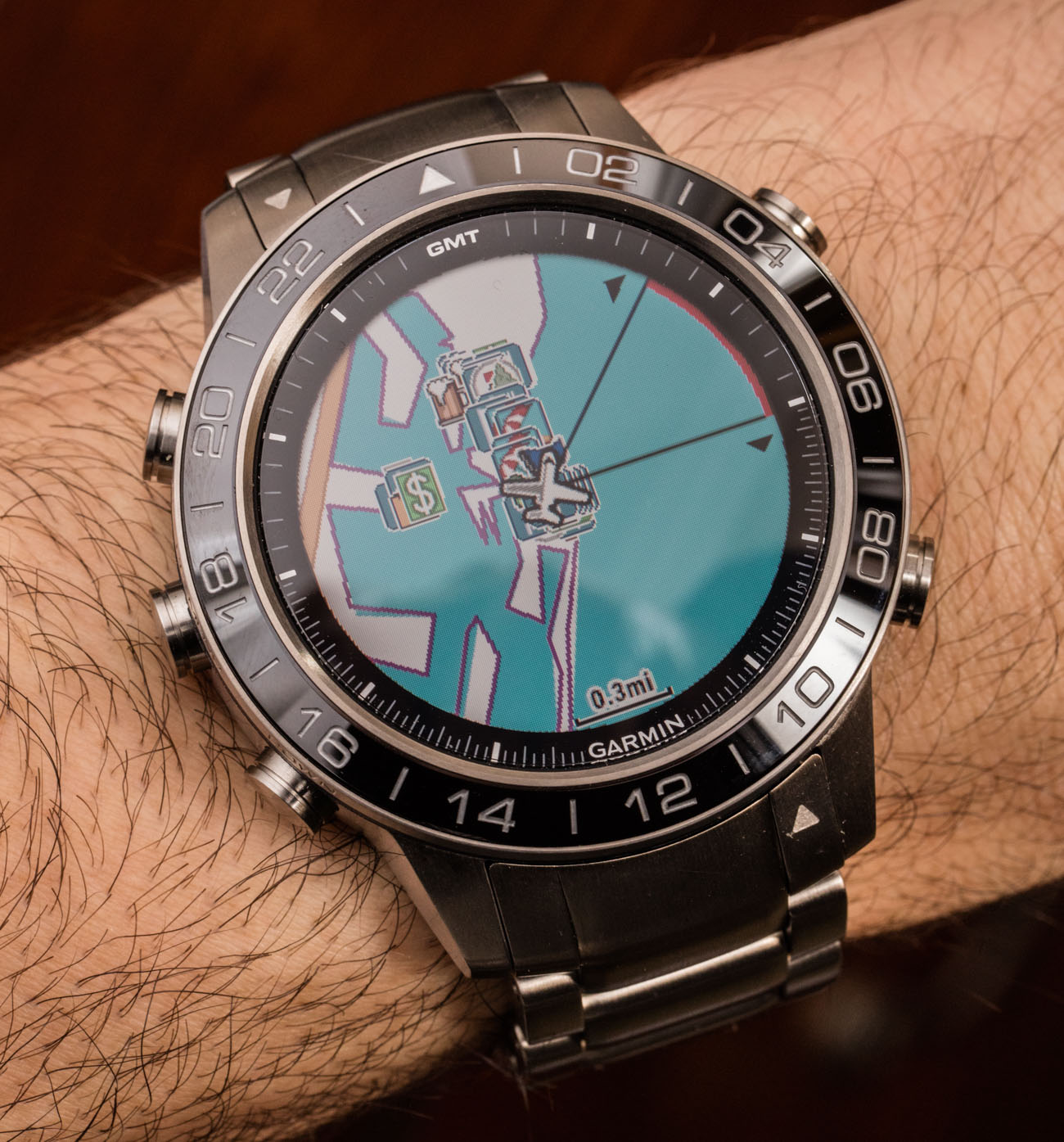 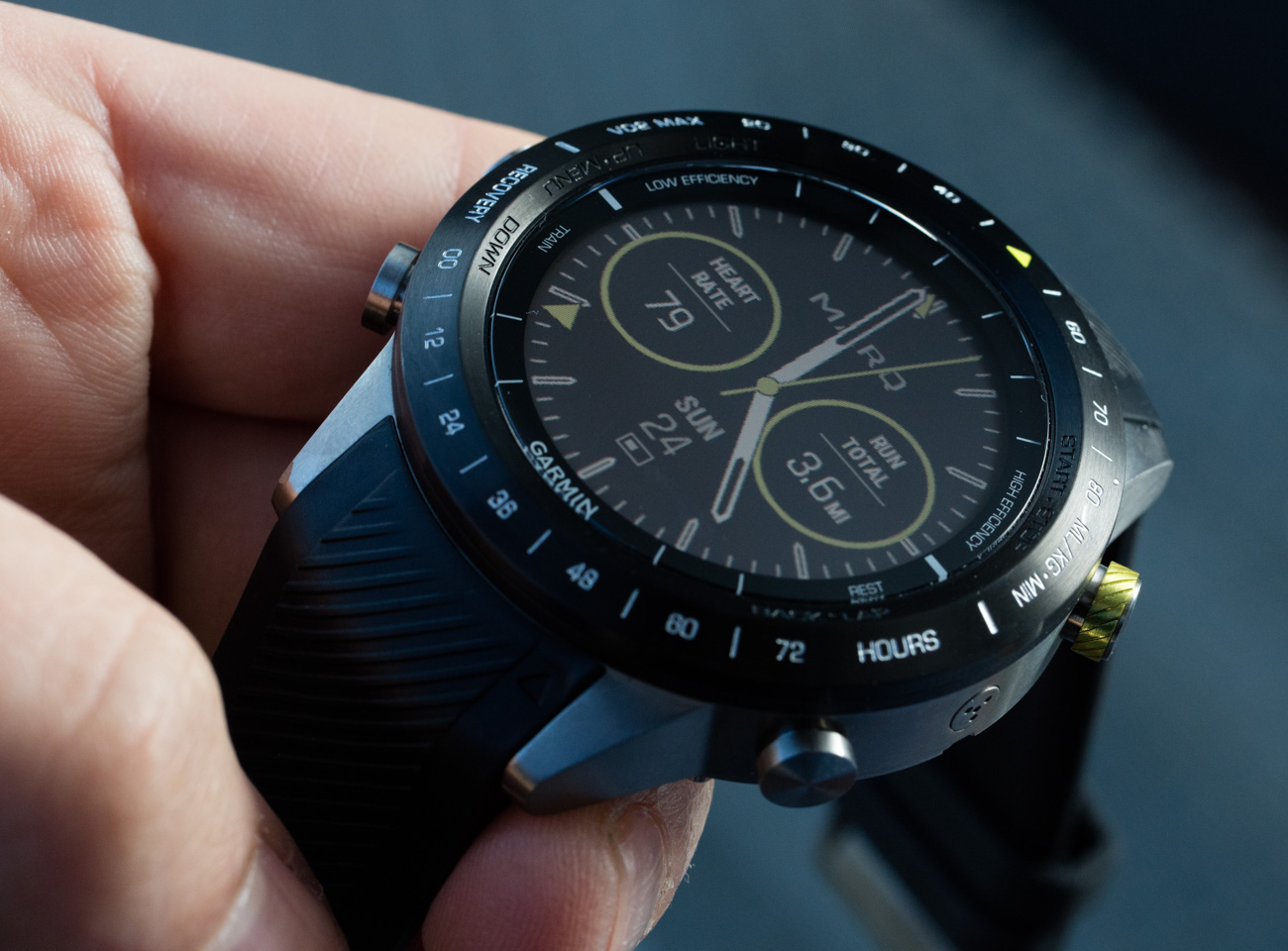 On multiple occasions, I’ve written that traditional luxury watches are not posed with an immediate existential threat by smartwatches because these categories serve multiple consumer needs. Several years ago, I correctly envisioned how a surging interest in smartwatches would actually benefit the traditional watch industry by offering a vastly increased spotlight on the category as a whole.

What I did not realize at the time is how quickly smartwatch-makers would focus on the higher-end lifestyle segment in addition to core business products, such as mainstream consumer smartwatches, where the emphasis is utility and reliability more than sheer design and materials. As I mentioned above, smartwatch-makers are still in what I call a “catch-up” phase; they are chasing traditional watchmakers who have, in most cases, a head-start of many decades. Rolex, Omega, and TAG Heuer, for example, each has histories that go back more than 100 years. Garmin, by comparison, was founded in 1989. Clearly, there has not been enough for Garmin and most other technology companies to develop what many refer to as a “culture of watchmaking.”

Such a culture allows a company and an industry to inherently know what is nice, not nice, poor quality, high quality, and in general what makes for an attractive timepiece product. Therefore, without this existing culture, timepiece companies need to follow the leaders until the point at which they can start to come up with their own original ideas. 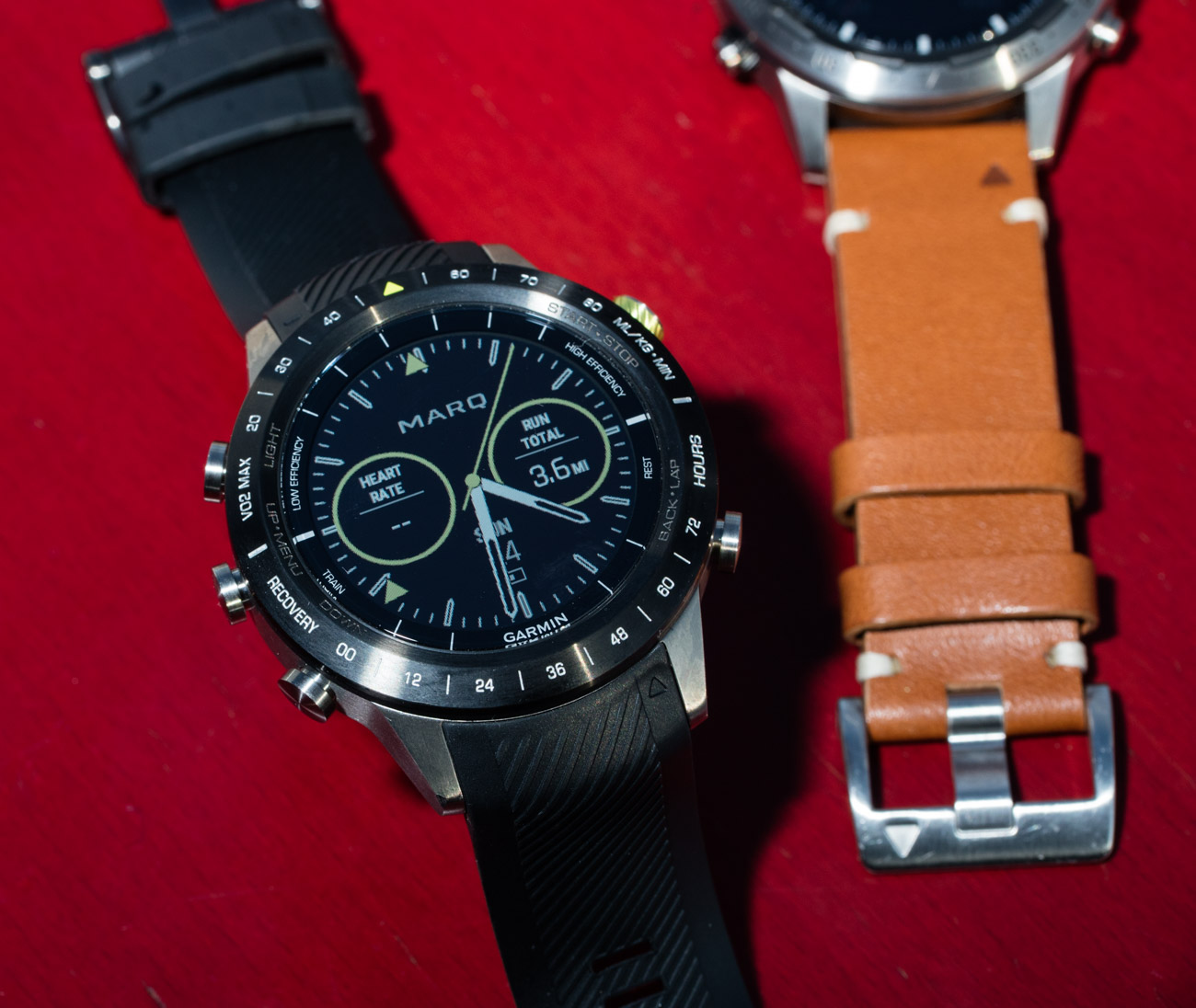 The Garmin Marq In Form & Materials

If I had one ding to offer the Garmin Marq, it is that for a serious watch enthusiast, these timepieces mostly lack a distinctive design personality, even though the products are attractive from most all angles. What I mean by this is that Garmin has not yet reached the point that their products can be said to have a lot of distinct design DNA elements — even though they clearly have unique technology and software DNA to be proud of. Unique design DNA will come as a result of more and more products, and it is perhaps premature of me to expect this now, in 2019, even though I know more distinctive designs will likely come in the future. For now, the Garmin Marq is easily one of the best (if not the absolute best) professional activity and sport-use smartwatch on the market.

Garmin segments the Marq collection into five products: the Garmin Marq Captain, Marq Driver, Marq Aviator, Marq Athlete, and Marq Expedition. The watches all share the same 46mm-wide grade 2 titanium case, which is very well-machined and reminds me a lot of some modern TAG Heuer case designs. Case thickness actually varies among the models and is between 14- and 14.7mm-thick. Water resistance for the cases remains a very useful 100 meters. There is a roughly $1,000 price difference between the top of the Marq range and the entry-level model, which is accounted for by differences in case coatings, bezel materials, and the straps or bracelets that are included with the watch. Each of the timepieces also has some unique software capabilities but, for the most part, share an underlying operating system, which Garmin develops and maintains in-house. 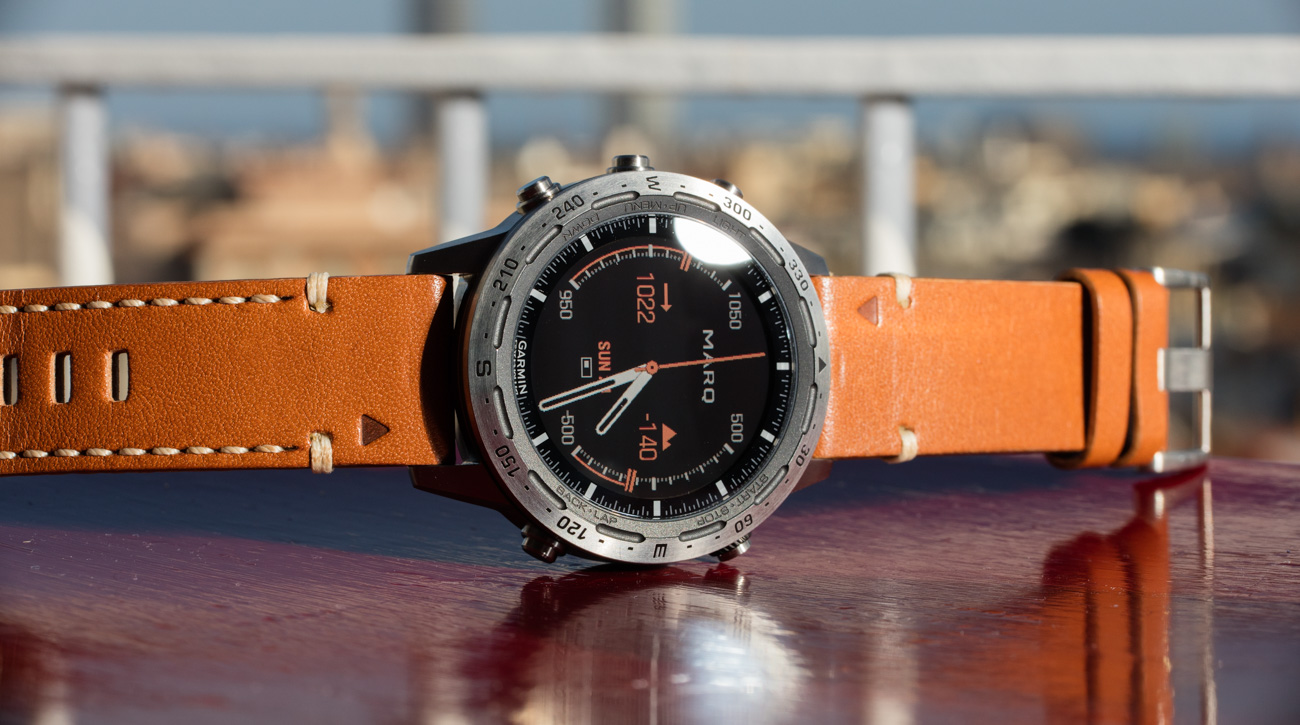 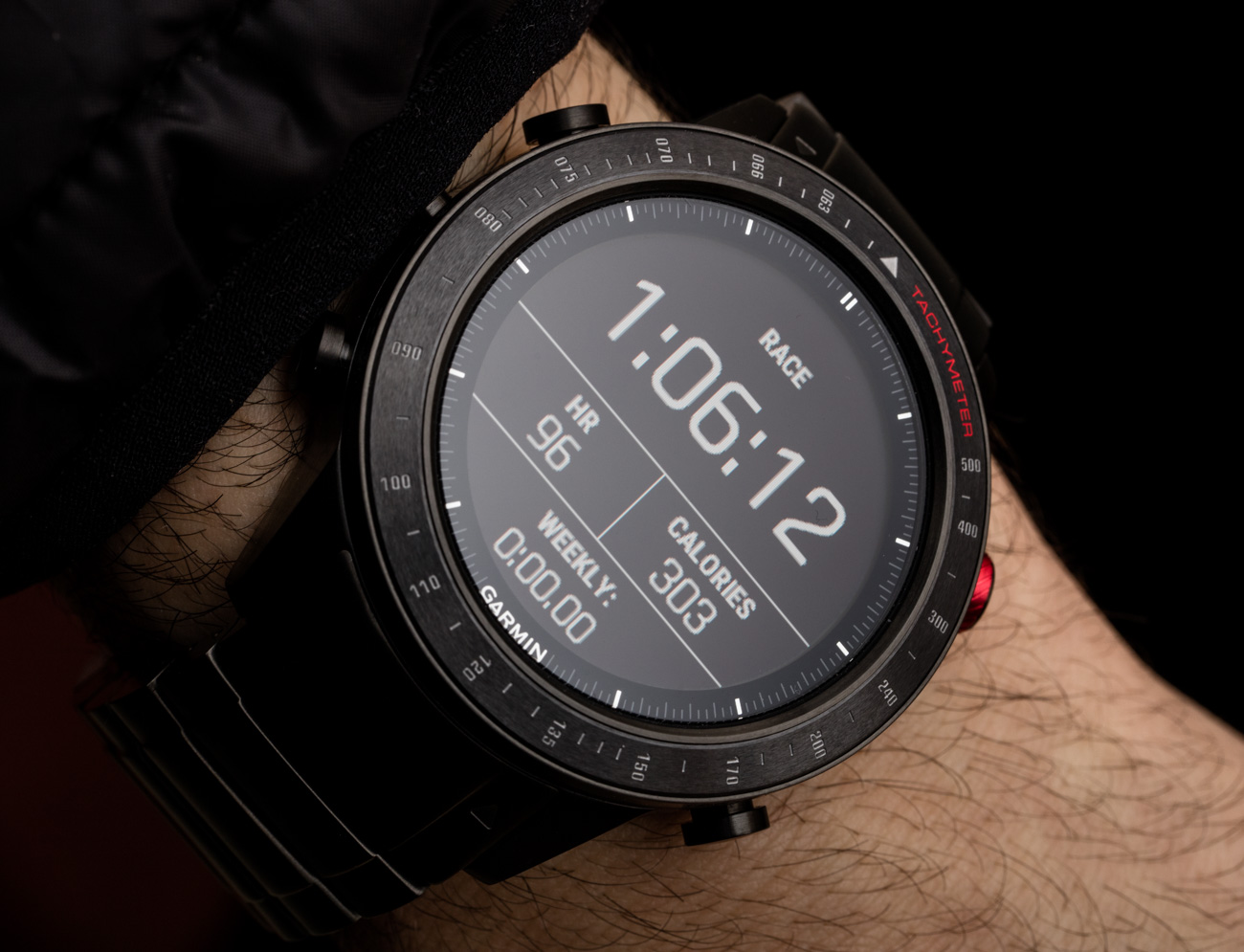 Over the screen is a sapphire crystal, and Garmin uses ceramic for parts of the bezels for some Marq models. In fact, the bezels themselves (and the markings) are a primary way that each of the Marq Models is differentiated from each another. The Marq Driver (currently the most expensive model in the range) also has a DLC- (diamond-like carbon) coated case and accompanying matching titanium bracelet. One of the most visually stunning models is the Marq Captain, which has a blue ceramic bezel insert and a bespoke thick-woven nylon strap proudly produced for Garmin by a manufacturing partner in France.

In fact, all the straps (which are 22mm-wide for the Marq) have interesting stories behind them and all benefit from a new quick-release system. What is most notable for watch-lovers about the quick-release system on the Marq cases is that it will also easily accommodate normal straps that don’t make use of the proprietary connection system. All you need to do is remove the special spring bar and replace it with a more traditional spring bar and strap. This is really important because most other watches with quick-release strap systems force consumers to only use designated (and often limited or expensive) strap options.

The Marq Driver also sees the return of Garmin’s “hybrid” bracelet, which has titanium links connected with silicone segments. This offers the look and durability of a bracelet with the comfort of silicone, which also allows for a unique type of articulation that further promotes wearing comfort. The Marq Aviator comes with a more traditional three-link titanium bracelet design that I believe traditionalists will enjoy. All the Marq watches come with a rubber strap option, as well — and only the entry-level watch, the Marq Athlete, comes with one strap, whereas the other models each offer two strap options.