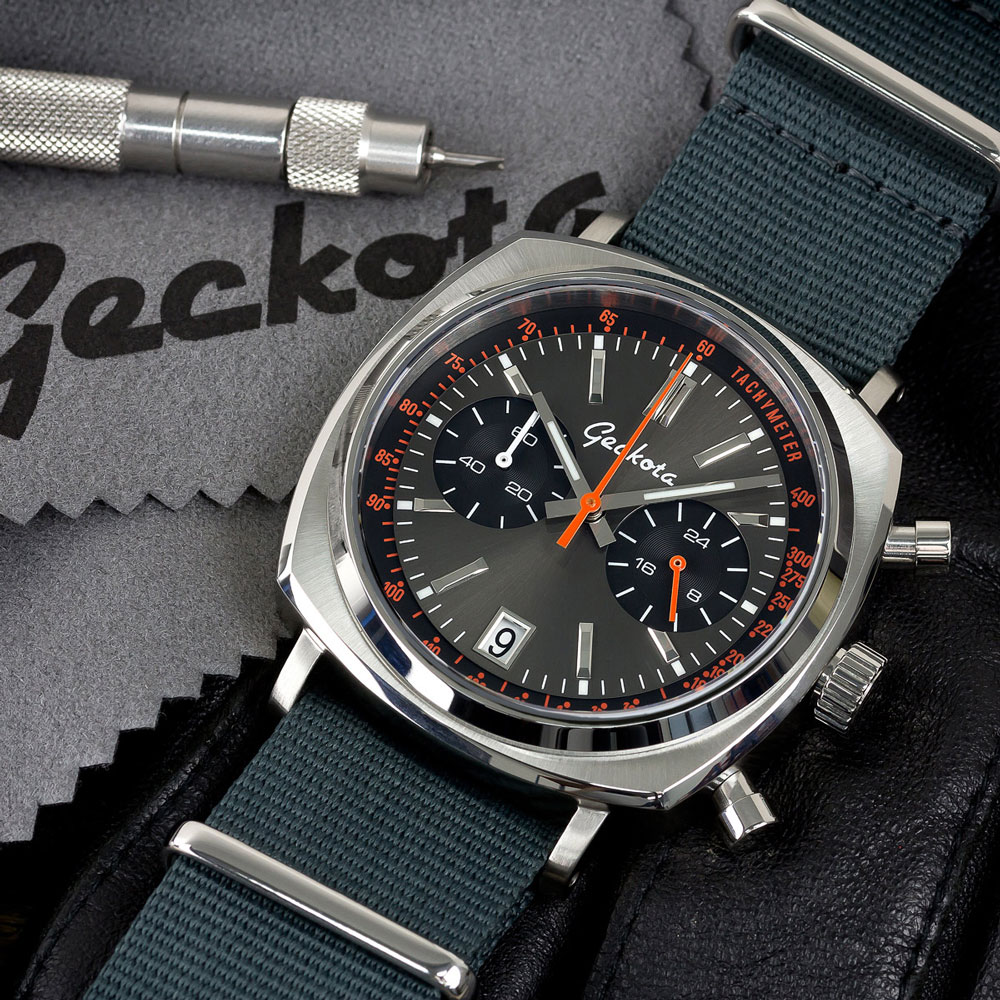 We can’t think of a better reason for a first contribution to aBlogtoWatch than the launch of our first motor-sport inspired chronograph, the Geckota C-1 Racing Chronograph. As with everything Geckota, the new Seiko VK64 meca-quartz hybrid powered chrono pays respectful homage to classic vintage watches. This time, it’s iconic 1960s and 1970s racing chronographs. Then, as you wonder whether it’s just a beautifully engineered “replica,” the intelligent twists from Geckota’s creative head become apparent to delight you. 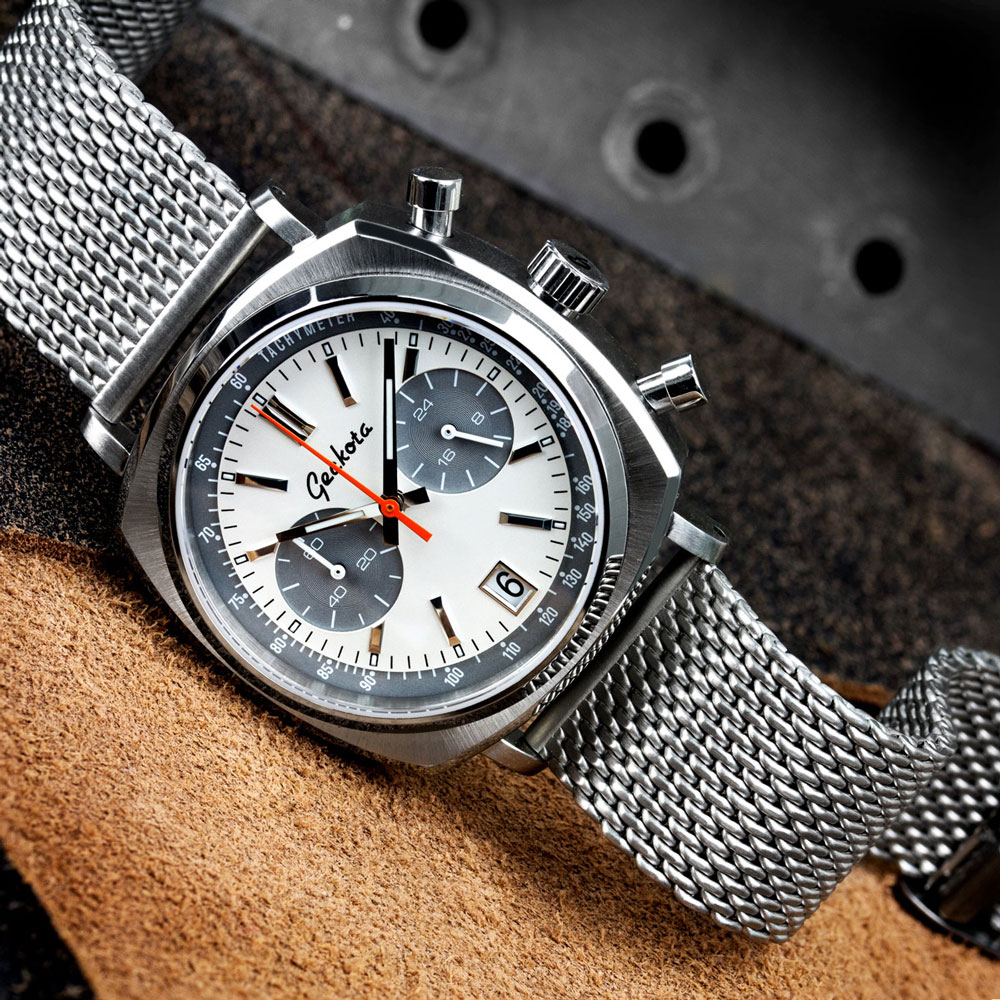 It’s a formula that already works with the aviation- and dive-inspired watches from Geckota’s Gloucestershire, UK, team. Where? Think London, then drive west into the scenic Cotswolds. It’s not quite the Vallée de Joux, but it’s home to a team that surely care as passionately about what they do as any Swiss luxury watch manufacturer. The result is a steady worldwide flow of watches with a hard-to-beat combination of price and quality.

Okay, so Gloucestershire isn’t exactly the Jura. And Ben Adams, Geckota’s design-lead, isn’t exactly Gerald Genta or Eddy Schöpfer – yet! But watch this space – or “this watch case” – as Adams’ talents, within a focused 12-person team, manifest themselves in exciting ways – like the new chronograph.

After several successful pilots’ and divers’ watches, a chrono was logical and fitting as Geckota enters its seventh year. Why? Because development of the Geckota C-1 Racing Chronograph coincided with the fiftieth anniversary of the launch of Chevrolet’s Camaro. And that, as we know, inspired one of Heuer’s most famous chronographs.

Ben Adams explains: “We started by looking at the cream of 1960s and 1970s racing chronographs. It was a golden age, so we were spoiled for choice. Though only made from 1968 to 1972, the hand-wound Ref 7220NT Camaro epitomised the era – and arguably represents the apogee of Heuer’s success. The ‘C’ was also a less obvious inspiration than watches that have been to the moon or been associated with racing-mad Hollywood actors. It’s classic cushion-case also sits nicely with our divers.” 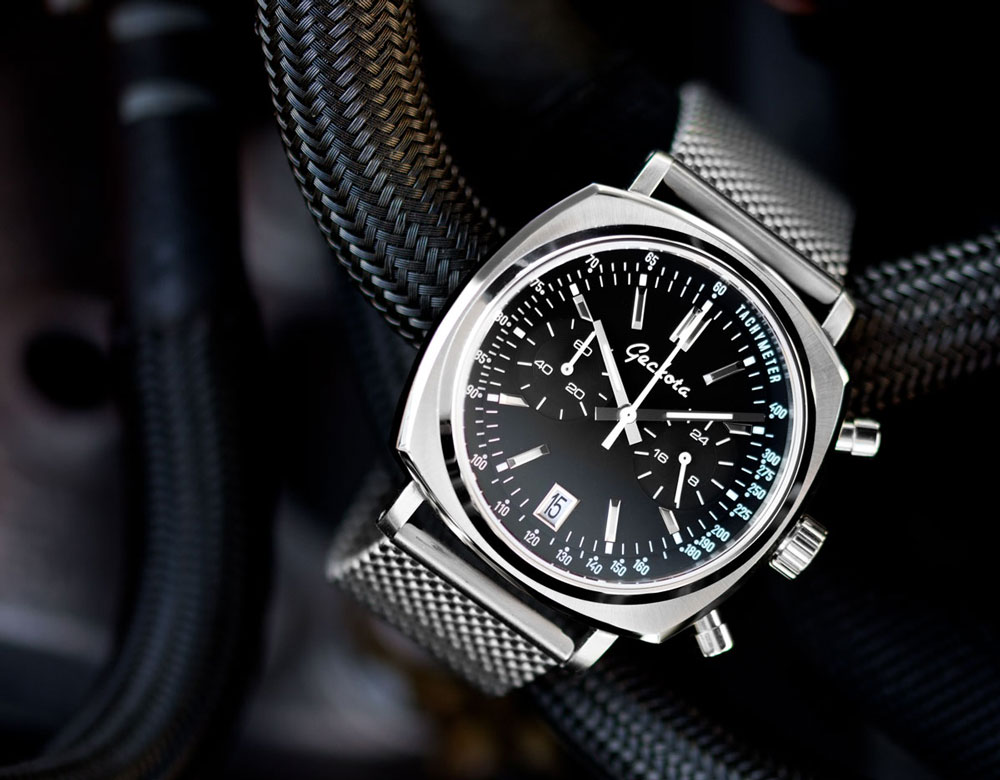 In Heuer Chronographen, brand expert Arno Haslinger writes: “The Camaro wristwatch was a totally new product line with an avant-garde design.” Now, Heuer’s 1966 chrono is equally important for Geckota; no pressure, then, for the team and their young designer during the Geckota C-1 Racing Chronograph’s conception.

There’s no name this time; during design and development, Geckota simply wanted a “racing chronograph” that would do what it promises – so that’s what the new watch is called. Maybe next time they’ll follow the advice of Jack Heuer who said: “The successful models have always been given a name. I continued this tradition and always chose the names of locations that sounded good and had a sporty and chic image.” Watch the affordable chronograph space, Geckota fans.

As well as being another respectful homage – it’s clearly Camaro inspired – Geckota’s C-1 Pilot Chronograph is a practical tool watch that “fits in anywhere from pit lanes to formal race-week functions.” The new timepiece follows in the hand-sweep of Geckota’s earlier limited-edition pilot chronographs. It’s currently on pre-order (with a tasty trio of Geckota NATO, handmade leather and Milanese mesh straps included to make an already attractive price irresistible). You’ll have to move fast because the Racing Chronograph is expected to be in stock from May 2017 and pre-orders will stop. 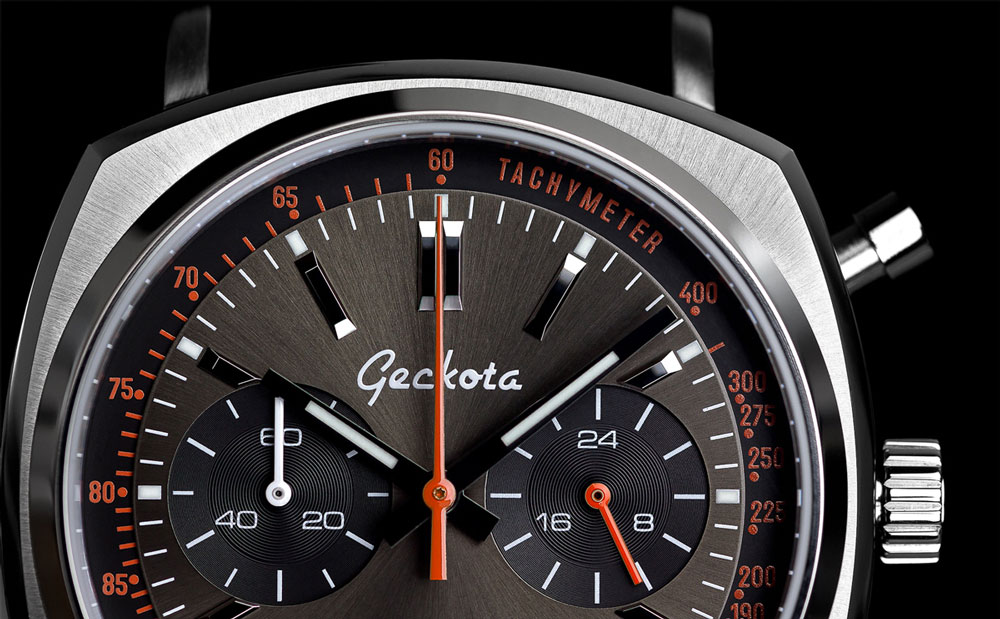 Designer Ben Adams again: “In setting out to celebrate iconic racing chronos, we kept the best features of classic designs and added our twists. It was challenging to make sure these are subtle and appropriate, yet striking enough to enhance the best of late-1960s watch design. So we included a more prominent polished bezel alongside quick-change drilled lugs that characterised many of the period’s hard-working tool watches – though not the Camaro. We engraved the case back too, where the watches of the time were usually unadorned. And we also used synthetic sapphire crystal instead of the original’s tough, but easily scratched, plexi-crystal.”

A quote that caught the imagination of the team while they designed and developed the Geckota C-1 Racing Chronograph comes to mind. Here’s Arno Haslinger again, on Heuer chronographs, as quoted in Aaron Sigmond’s Drive Time: “Mechanical wristwatches and automobiles go together very well…Both have wheels, clutches, bodylines, technical features, mechanical interferences, model histories, design influences reflecting the period of manufacturing, fine-tuned materials, steel and chrome – and the collectors are a related crowd.”

Ben Adams again: “We’re getting very positive reactions to the Racing Chronograph on social media, via the WatchGecko website and from watch industry commentators. It validates our design decisions and our belief that we’ve captured the essence of the Camaro’s design language, while ensuring our watch can never be labelled a copy. That just wouldn’t be Geckota.

“There have been a couple of comments about the two-register configuration, without running seconds, but with a 24-hour register – largely down to the VK64’s native functionality. Do you use a 24-hour subdial or not? And if so, how? We’d welcome your feedback.” 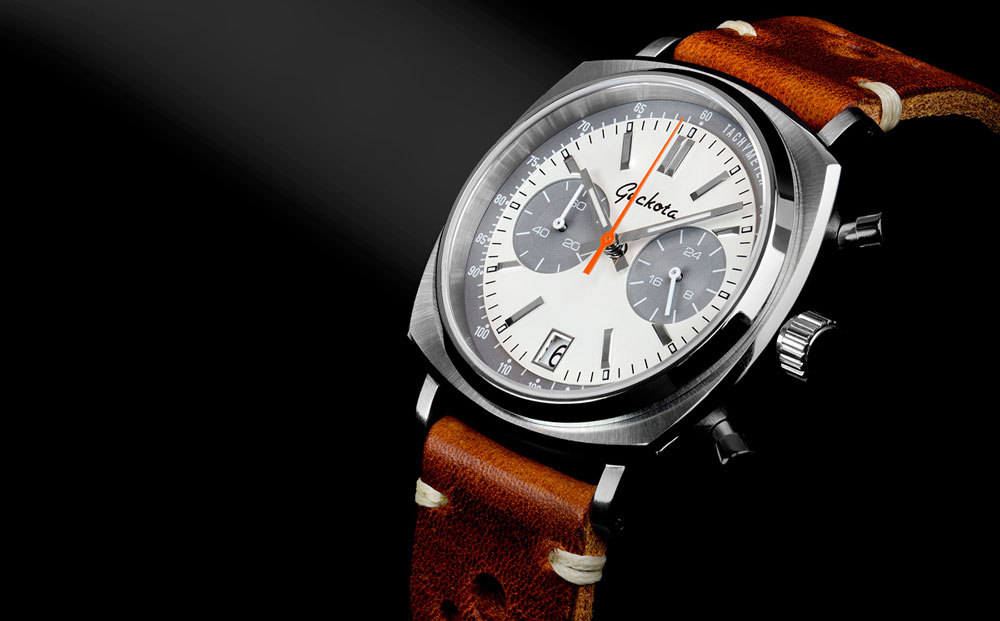 Geckota’s signature attention to detail was a priority during the chronograph’s design. This is perfectly demonstrated by using several contrasting finishes on the case: the bezel’s polished mirror finish; upper surfaces’ sunray; and understated vertical graining on outer faces.

Ben Adams again: “Our chosen colours are subtler interpretations of popular 1960s and 1970s combinations. They’re complemented by a black tachymeter flange that echoes that on some Heuer Camaros.”

Adams is pacing himself as he and his colleagues carefully navigate their way into another part of the affordable-watch market. His preference is for small, carefully considered evolutions delivering watches that evoke an earlier zeitgeist – while delighting wearers with Geckota’s contemporary “twists.”

“Our philosophy,” says Ben, “is simple. We work with integrity to develop high-quality products that combine an affordable taste of watch history with new details that enhance the classic design.”

It won’t surprise anyone who’s followed this proudly-British micro-brand since its 2010 launch (selling replacement watchstraps), that Geckota has designed their first racing chrono to win. This is no clumsy copy, but a practical chronograph adding something to the Camaro while combining the accuracy of quartz and mechanical-chrono refinements. 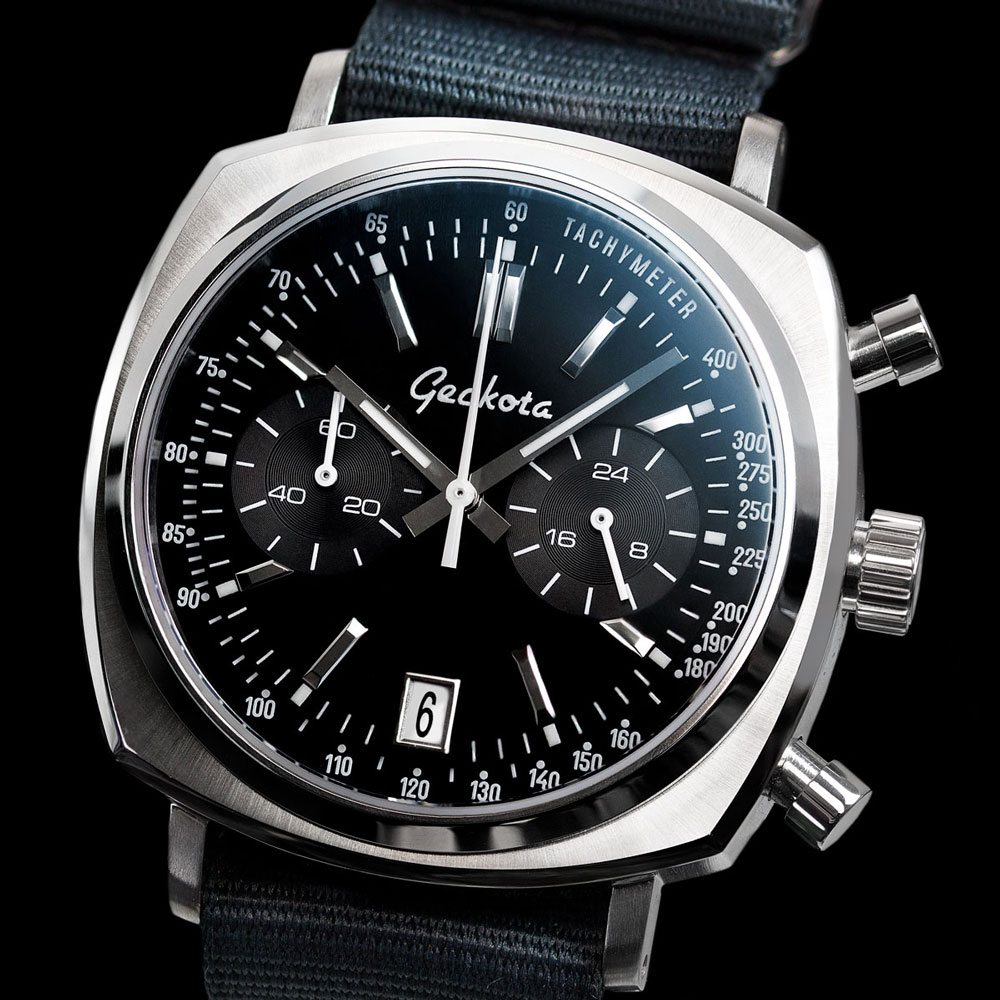 It has engaging details aplenty. They range from the two sub-dials to the larger dial diameter (42mm vs. Camaro’s 37mm) and the polished bezel that really lifts the Geckota. Then there’s the way Adams confidently notched the lengthened, high-relief, applied indices to support the sub-dials. Genius!

“We consciously avoided differences for difference’s sake,” he recalls. “This is another respectful homage, so anything we change is always for meaningful functional or aesthetic reasons.” With youth, and more than their fair share of talent, Ben Adams and the Geckota team promise lots for the future – and a growing portfolio of temptations for watch lovers who want to wear an affordable story on their wrist.

Think of young designers such as Ben Adams. Now imagine yourself back to when Gerald Genta, “Geneva’s Bob Dylan” worked on his first big design, Universal Genève’s Polerouter. Now remember what came later, for the likes of Bulgari, Audemars Piguet, and his own eponymous brand…

Watches like the Geckota C-1 Racing Chronograph, and other new Geckota treats due in 2017, bode well for the future of the “respectful homageistes” from England’s Cotswolds. And the pleasures ahead for the growing following of fans who adore Geckota’s affordable, high-quality re-creations – with their twists.

If you’re ready for some 1970s racing chrono action for a modest 2017 investment, visit Geckota to find out more. Preorder here at WatchGecko. And while you’re there, make sure to view the rest of the watch and replacement watch strap range. Ben and his colleagues would really value your feedback on the Geckota C-1 Racing Chronograph. What do you think of it? What would you like to see the team develop next? Please comment below. geckota.com