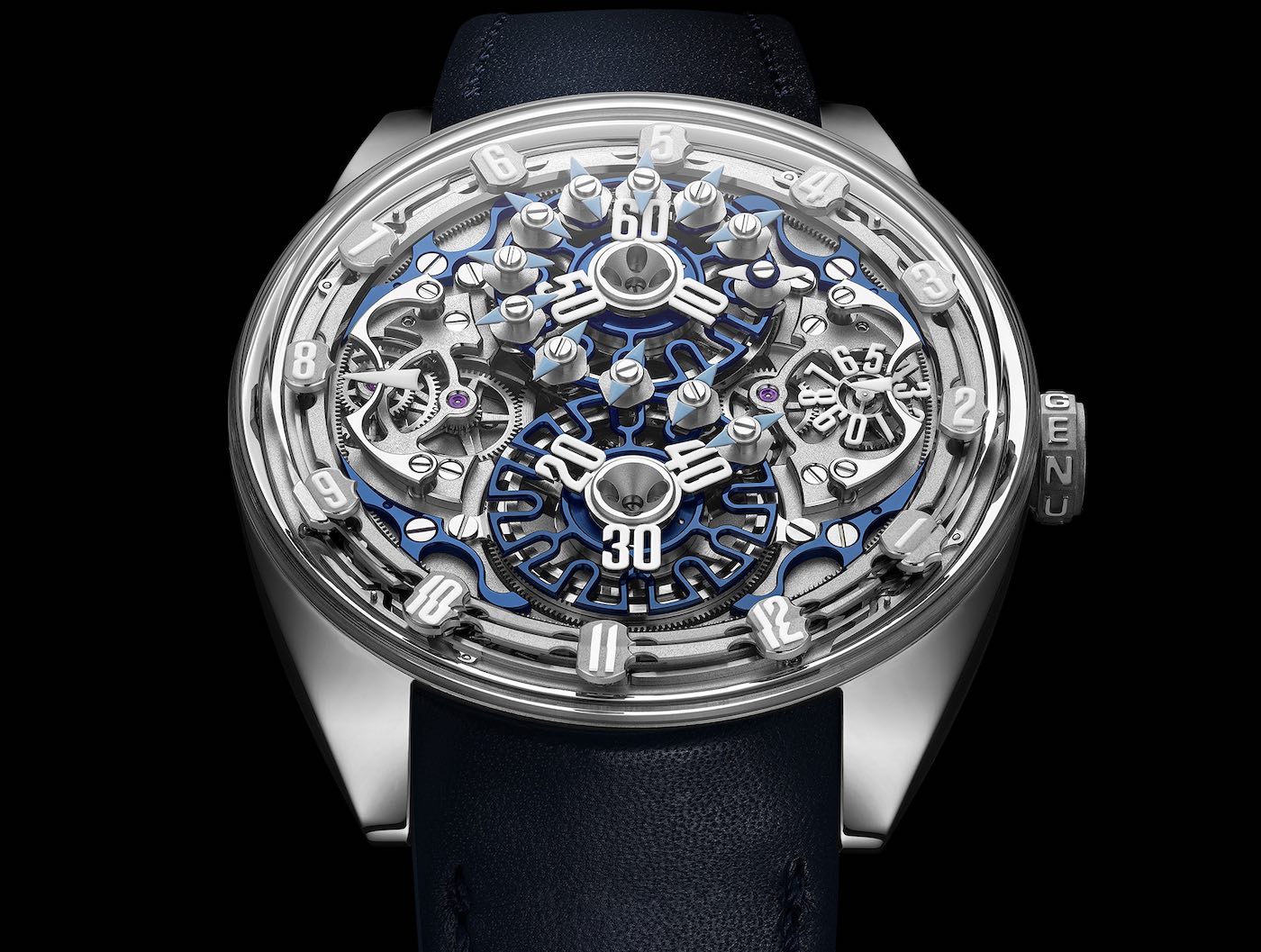 As we race toward 2019’s edition of the Grand Prix d’Horlogerie de Genève, due to be held November 7th at the Théâtre de Léman, one brand is particularly excited as this year’s awards ceremony will mark its birth. Genus, a new independent watchmaking brand from Geneva, is attempting with its debut piece to showcase a new kind of creative Haute Horlogerie. 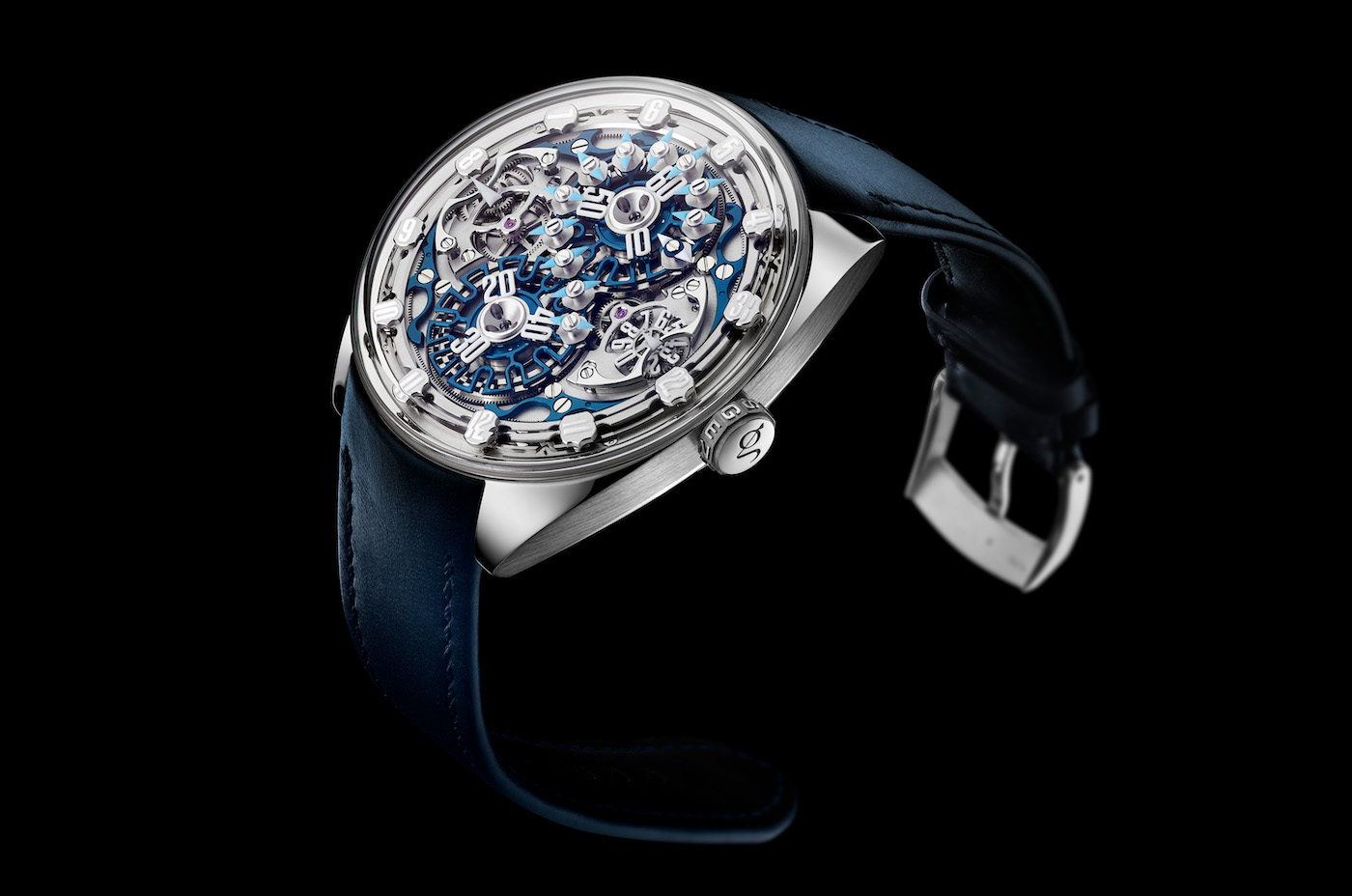 While we’re used to (and occasionally sick to the back teeth of) hearing about revolutionary “firsts” in watchmaking, Genus has managed to do something rather novel with how the time is displayed. Although it certainly takes a lot more getting used to than a traditional handset (and will, no doubt, switch off swathes of people as a result), the effect is quite bewitching, if given the chance. Genus has dropped a few teaser videos on its YouTube channel that feature the white-gold version (the GNS.1WG) with a whole train of minute markers snaking their way around the dial.

First things first: This whole project is based around a fascination with the figure 8 (which, assumedly, means all eight of these limited-edition watches will be sold in the Far East where the number carries particular significance — while this watch’s six-figure price tag will not). This will become apparent when you get your head around how to read the time. (Watching the YouTube video is advised; it makes it immediately obvious.)

As obvious as reading the time is, once you know how to do it, that doesn’t necessarily mean it’s easy or in any way intuitive. But, at the risk of sounding cynical, if you’ve got the money to spend on this watch, you probably don’t care.

So, let’s start with the hours. Head over to the traditional 9 o’clock position where a small white arrow is pointing toward a white-gold track, mounted with rotating hour indicators. The track moves clockwise, with the hour markers themselves adjusting their position for visual impact during transit. 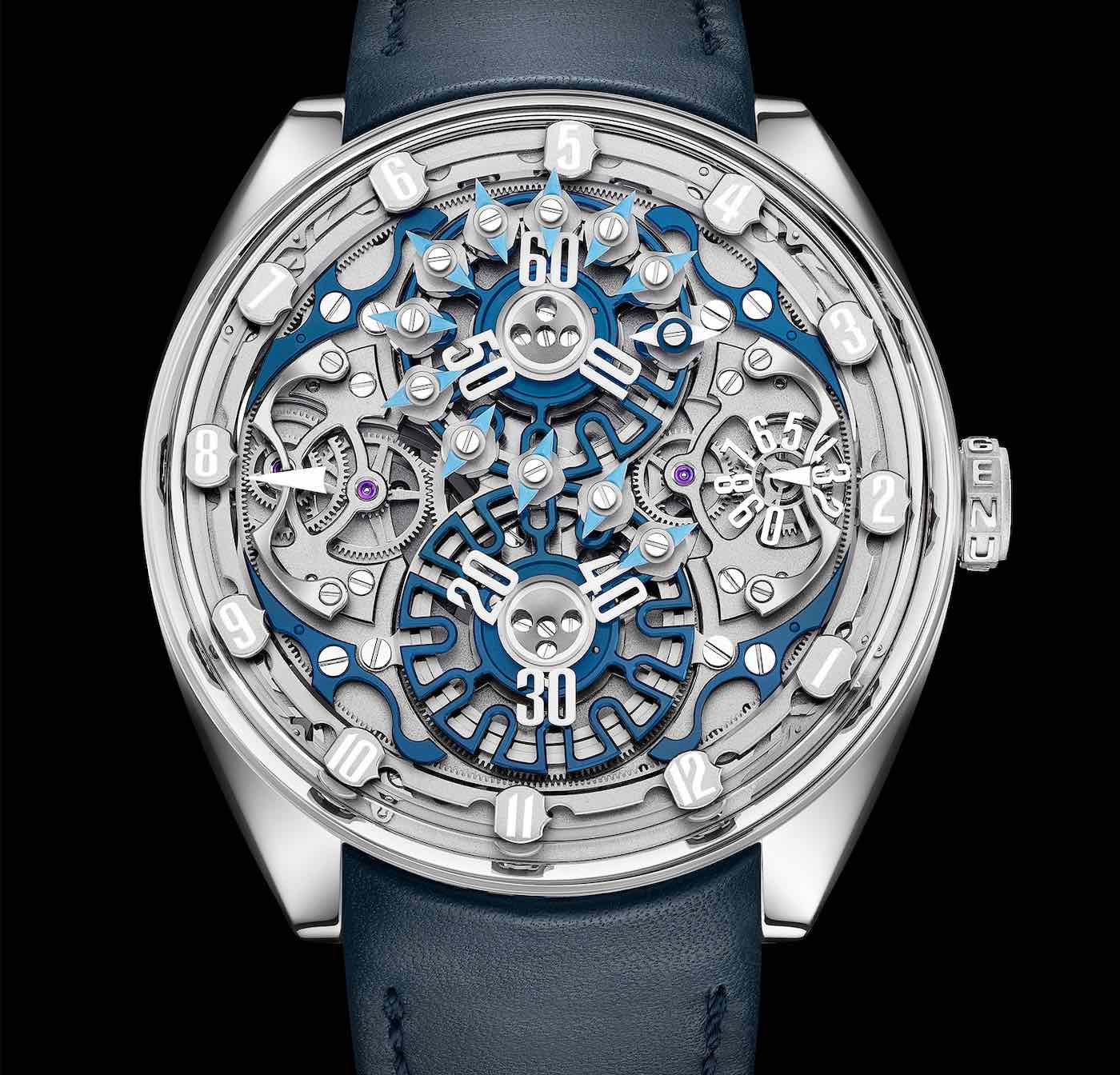 The minutes are read in two stages. The first, and most arresting, port of call is the tens of minutes register, which is arranged over two “discs” forming a figure-eight in the center of the dial. If you look closely at the images in this article, you will see a small, double-tipped white arrow leading the snake of blue arrows in between the 60 and the 10 on the tens of minutes sub-dial at the traditional 12 o’clock position. This is the minute indicator, and it has been named the “genus.” It travels around the outside of the blue discs, transitioning between the top and the bottom disc and traversing the dial in a figure-eight pattern. The genus and its followers are carried on their journey by notches in the blued discs that sit between the static tens of minutes markers.

Once you’ve figured that out, go and run yourself a celebratory bath to relax (but take this watch off before entering, as it’s only water-resistant to 30 meters). As soon as you’re ready to continue, affix your eyes to the usual 3 o’clock position to read the exact minute. To test your newfound skills, try to read the time on the images in this article. (I’ll reveal the answer in the next paragraph.) 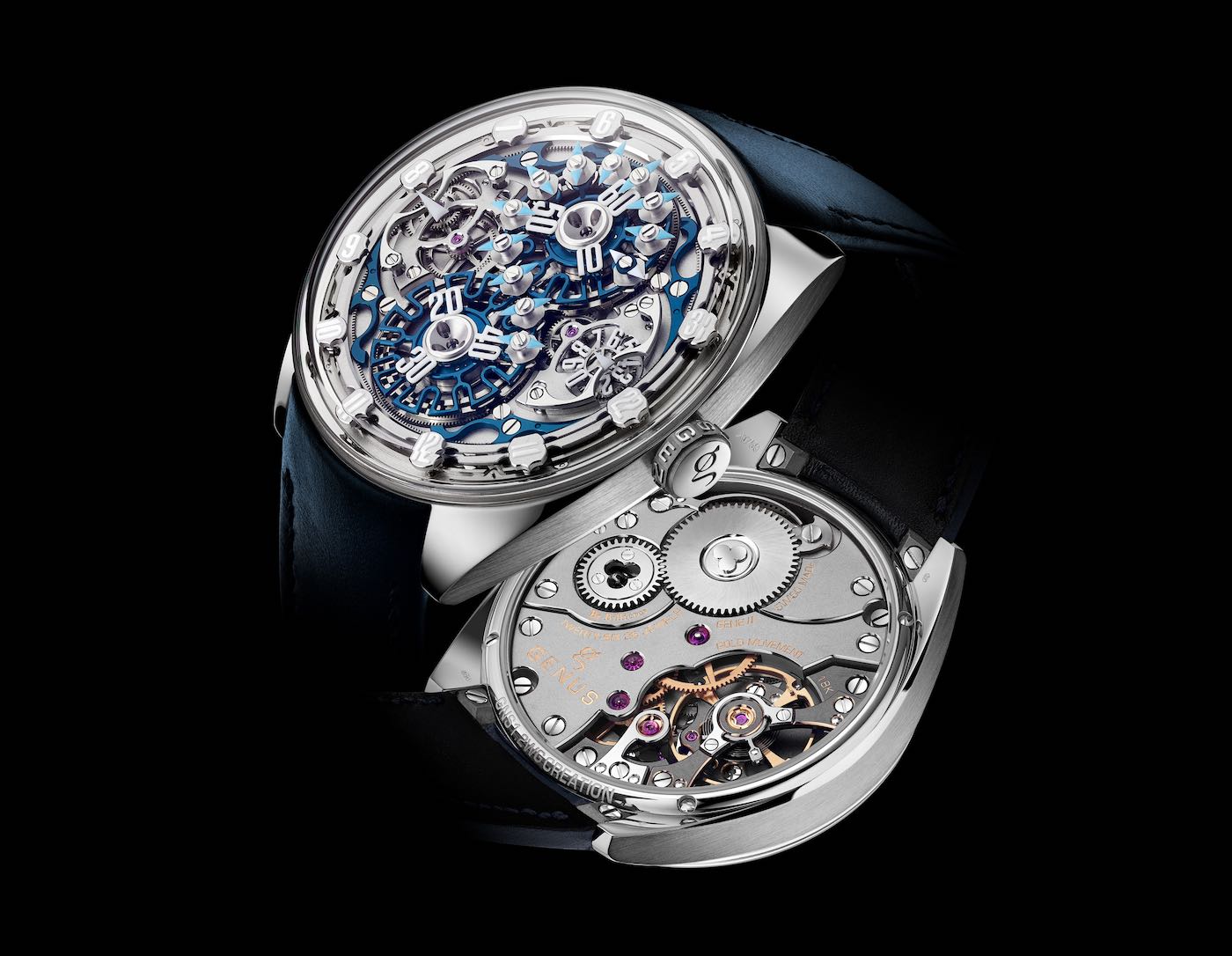 It’s 8:08. Whether it’s am or pm, though, is beyond me. It is possible you could spend between 8:08 in the morning and 8:08 in the evening while figuring out that it is definitely 8:08 before it rudely becomes 8:09 a moment later. But as I said before, if you can afford this watch, you can also afford to hire someone to follow you around reading it for you (just think of them as a biological minute repeater), so you can get on with making more hundreds of thousands of dollars. 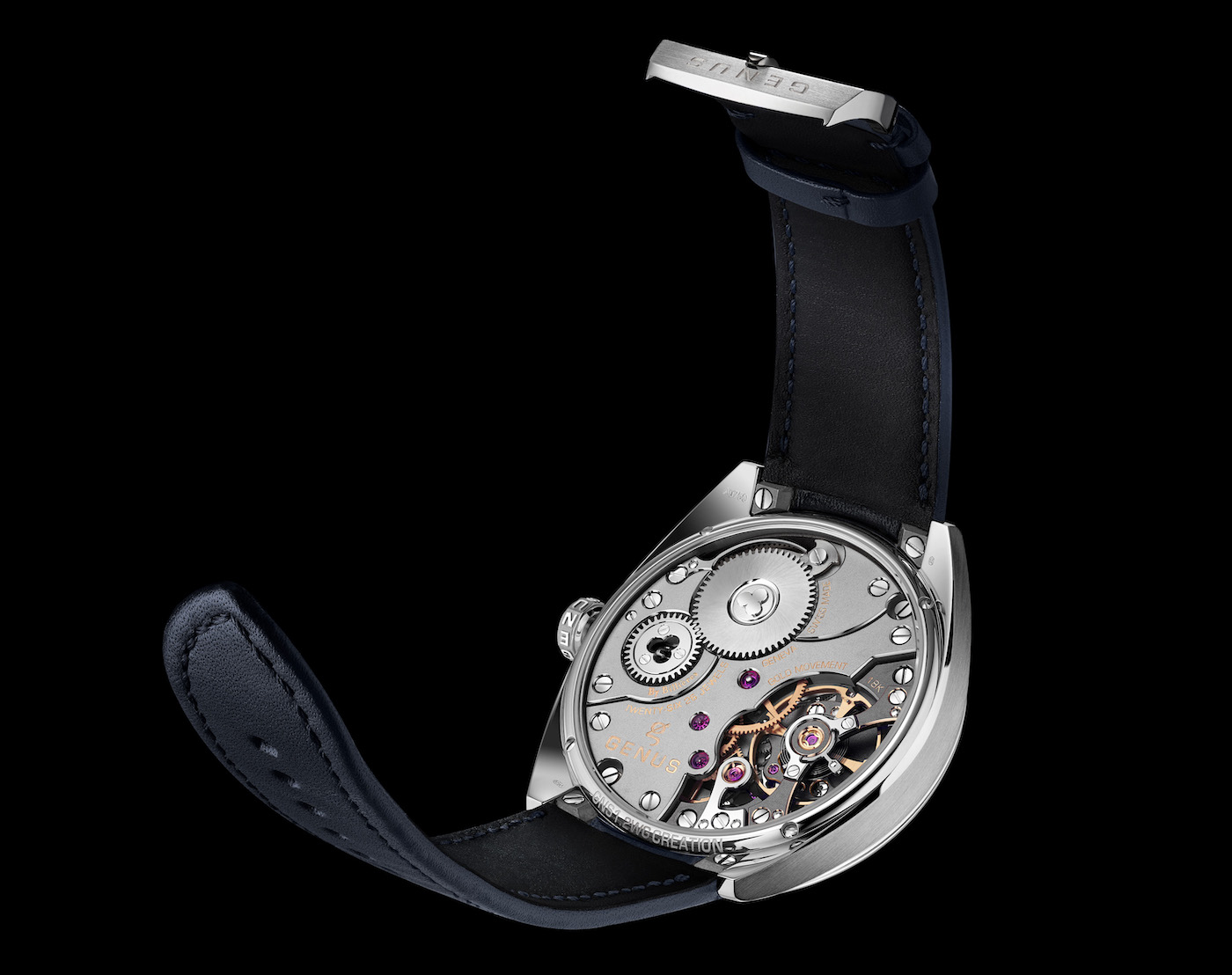 Genus timepieces are powered by manufacture calibers in 18k-gold. All movement components, of which there are 418, are hand-finished, with most steel components being black-polished and beveled. Other finishes include mirror-polishing, circular-graining, straight-graining, beveling, microbead-blasting, diamond-milling, flank-drawing, angle-buffing, and snailing. The caliber operates at 18,000vph, which means the balance can be observed in all its languid glory on the reverse side of the 43mm case. This slow-moving escapement stretches the power reserve of an understandably put-upon mainspring to 50 hours.

Aside from the stunning beauty and whimsical complexity of this piece, it is crafted with ethical gold, for which the brand should be applauded. The projected retail price of CHF 288,500 includes an 18k ardillon buckle, but an 18K gold folding clasp is available upon request. Learn more at genuswatches.swiss.