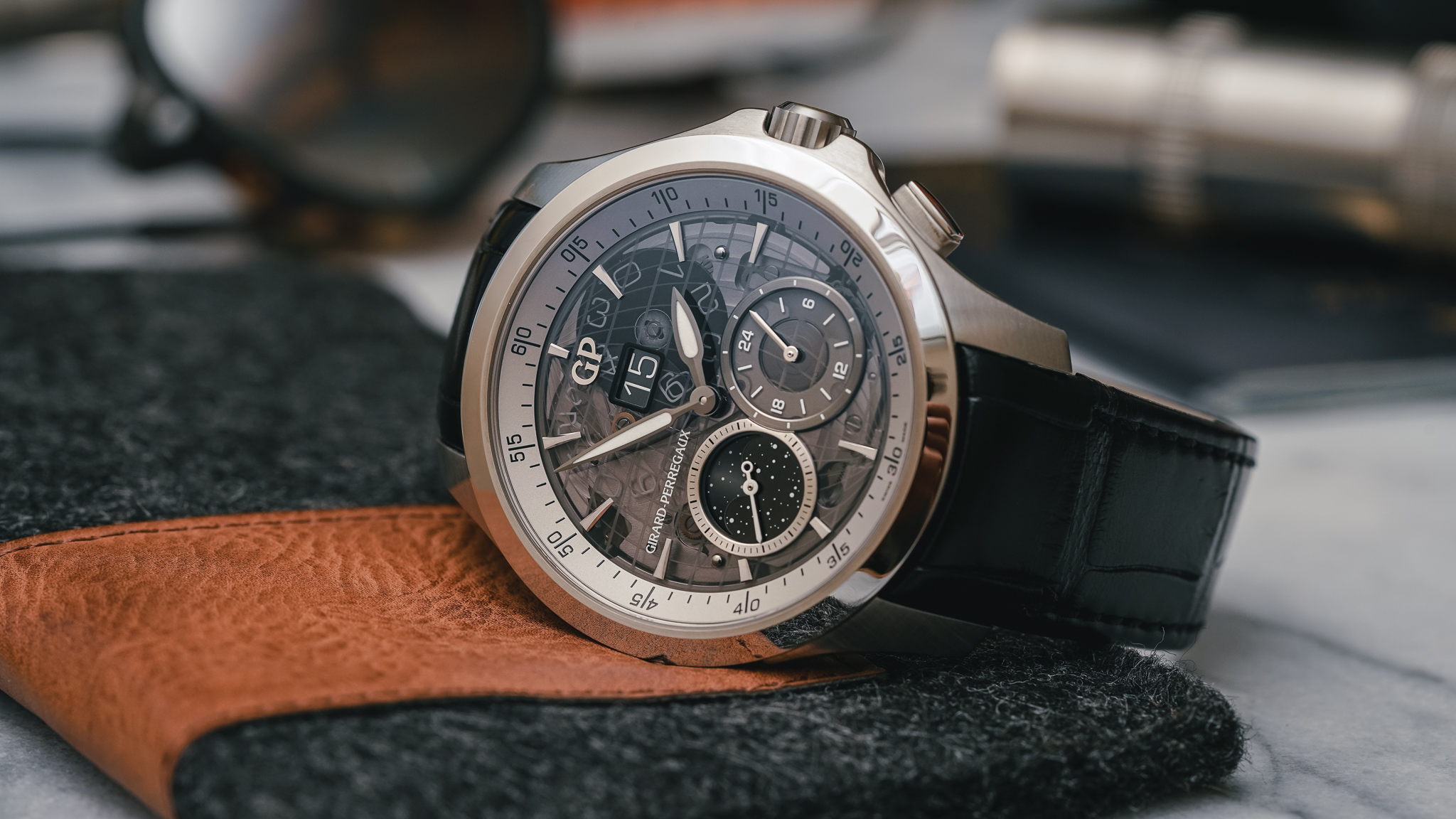 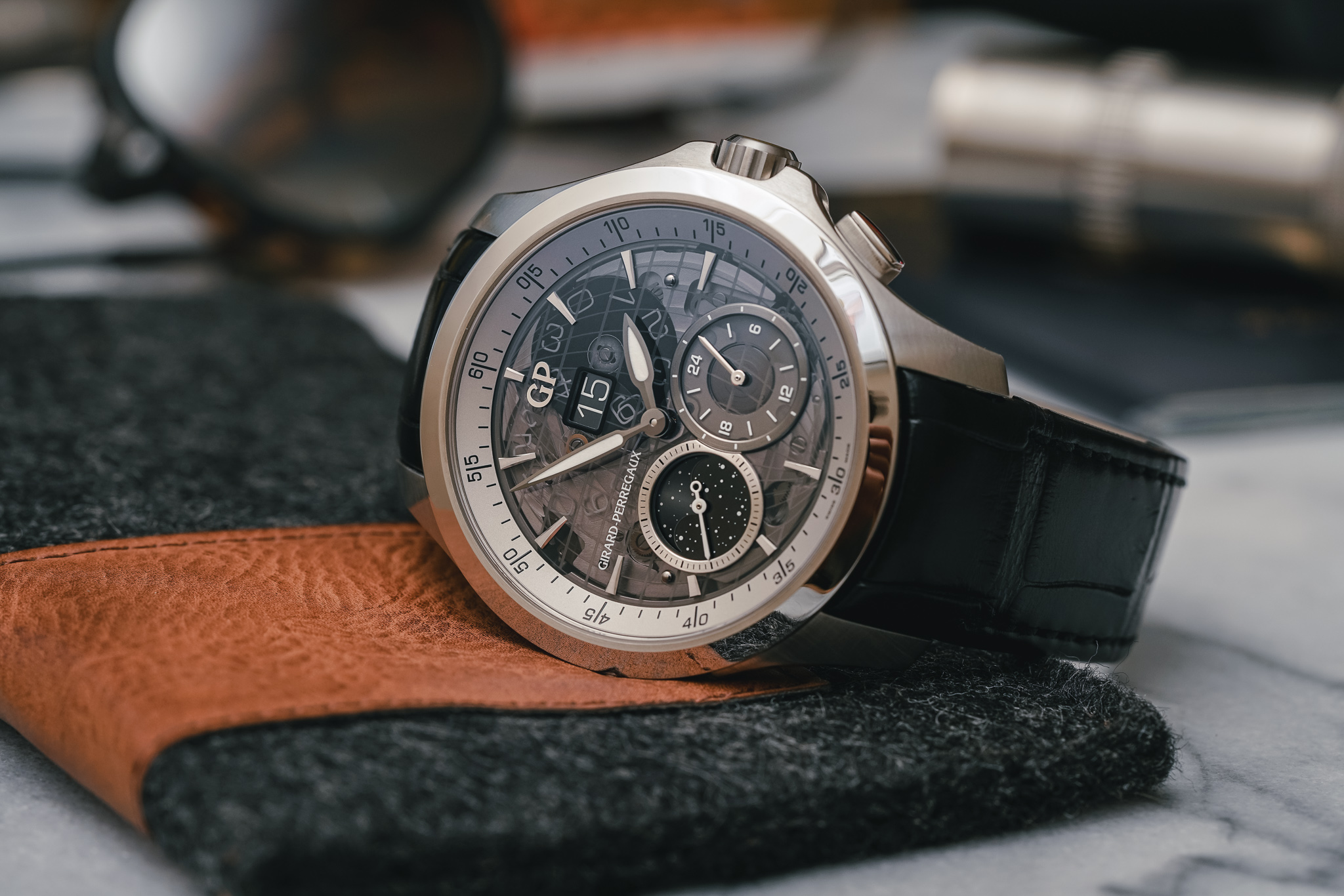 I feel like there is an entire generation of truly awesome watches that have been completely overlooked,  relegated to history’s proverbial milk carton with a bold black banner pleading, “Have you seen me?” beneath. Not yet old enough to be considered notably “vintage,” but slipping through the cracks just before Instagram made everything instantly accessible, one such “nü-vintage” or “neo-modern” watch was the Girard Perregaux Traveller collection, easily one of the generation’s best-kept secrets from one of watchmaking’s most criminally underrated manufactures. 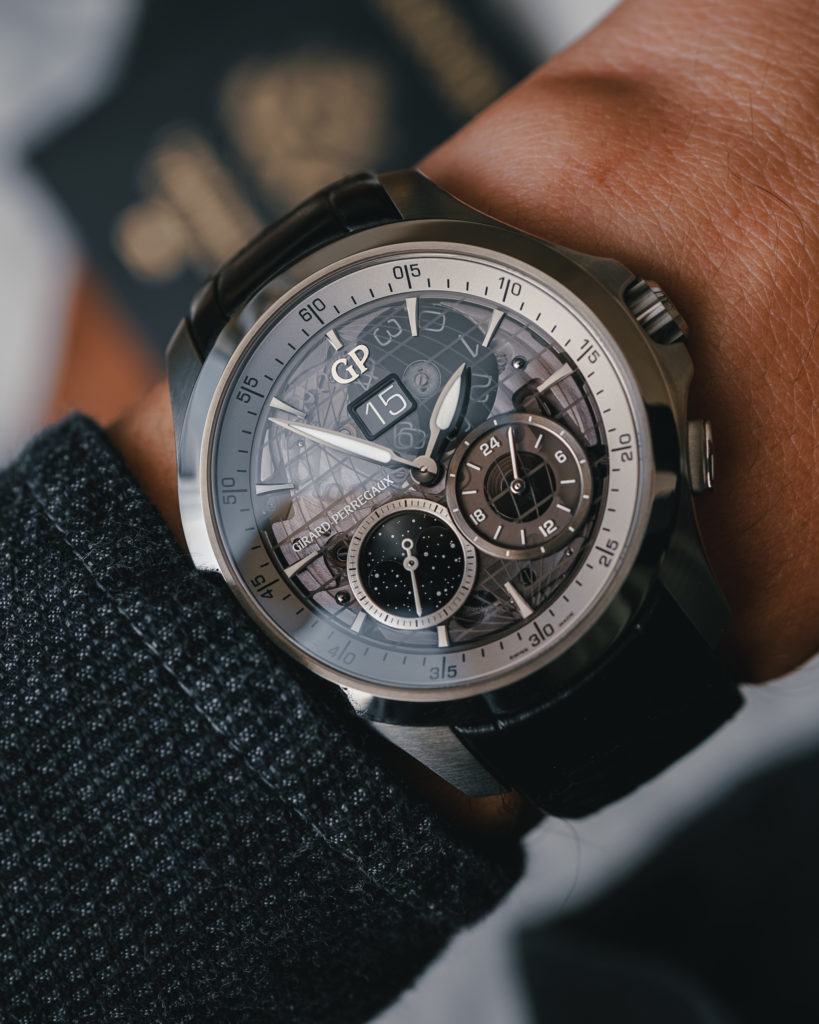 Originally introduced in 2014, then updated to this particular reference in 2015 (and discontinued shortly thereafter), the Traveller collection — in particular, the Large Date, Moonphase & GMT — provided a whole host of great functionality and wearability in a beautifully finished package — not atypical for anyone familiar with Girard Perregaux’s offerings from the last decade, or so. This Traveller, in particular, was housed in a beautifully sculpted 44mm by 12mm case whose easy wearability defied its decidedly modern proportions. It was also water resistant to 100 meters, a boon for any frequent flier who might indulge in the occasional ocean swim or hotel pool at any point during his or her journey. 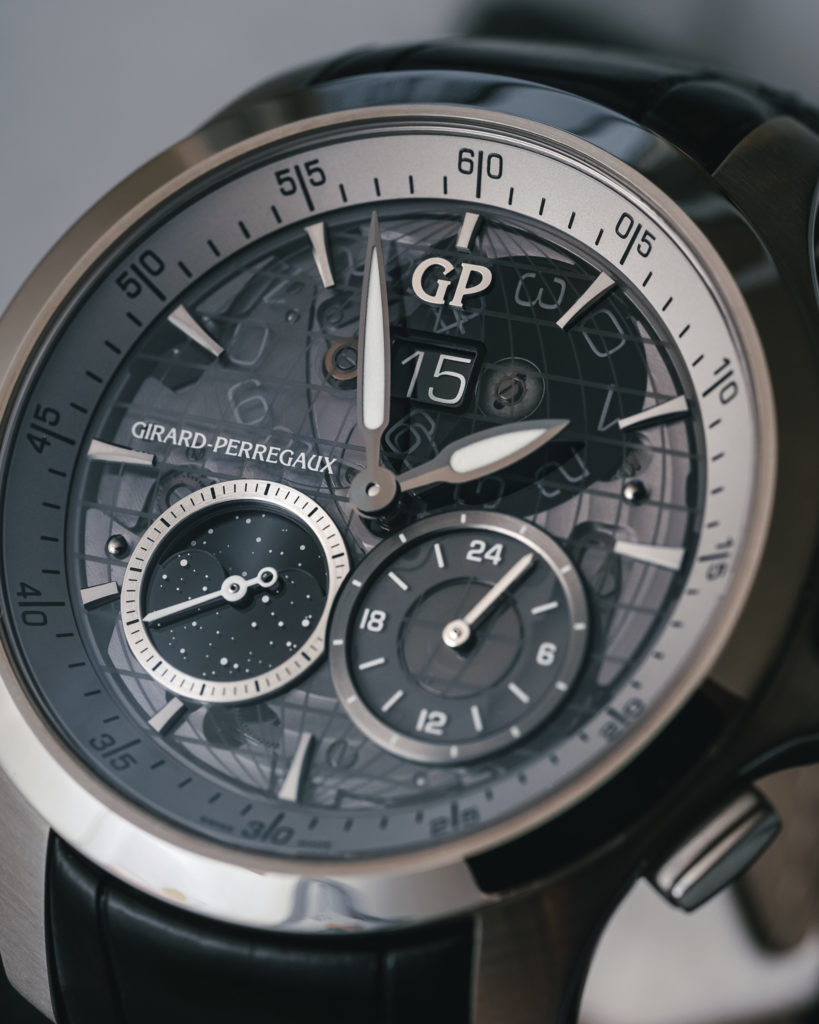 The date window doesn’t get enough love from watch fans — and, though I generally prefer having one, I fully understand most of the criticism, which most commonly cites it for being obtrusive, unnecessary (particularly for those who switch watches every day or so), or simply because it breaks up the dial uniformity. But what I’ve always loved about the “big date” complication is that it makes no attempt to disguise itself somewhere in the dial — and the brands that do it well, like Girard Perregaux, lean into the complication and make it an integral component of the watch design. It’s in the best instances, like this one, where it is not hidden at 4 o’clock or tucked into half an index at 6 o’clock, but instead displayed proudly at 12 o’clock where it supersedes even the name of the brand. 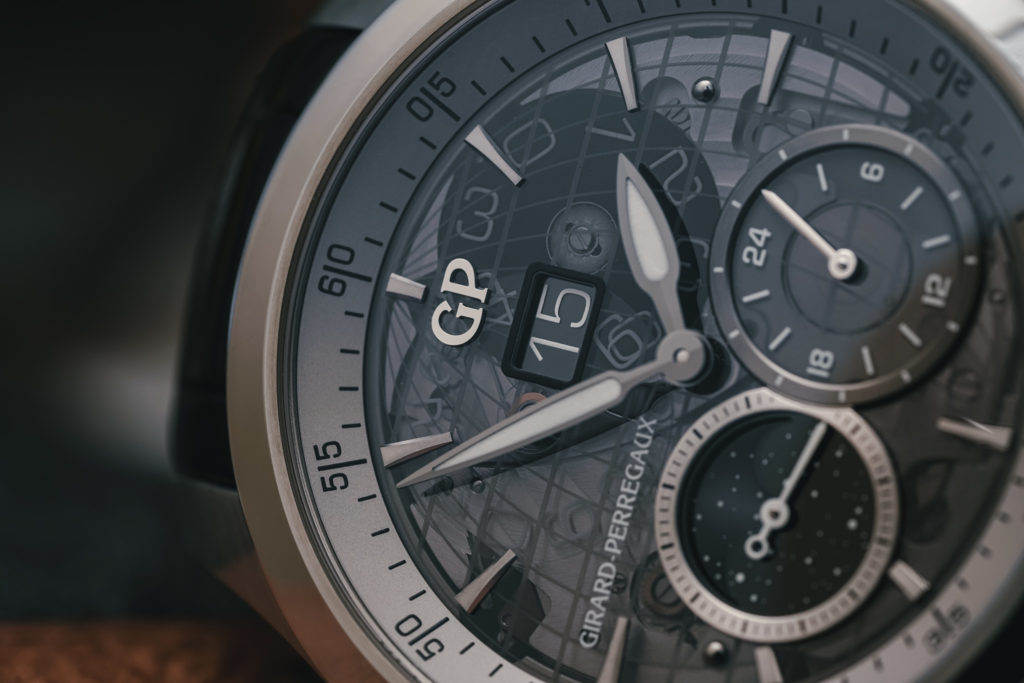 It’s the first thing your eyes are drawn to after the time, and for good reason: Girard Perregaux engineers have rendered each of the overlapping date discs in an ultra-thin (a scant 0.10mm-thick, around the thickness of a human hair) transparent film called “folanorm,” upon which the numbers are screen-printed. This is to ensure that both discs are on a seamless visual plane with no separation between them. All things considered, it’s a minor detail, until you look at how a traditional Grande Date complication is rendered, where you’ll notice the two date discs are on entirely different intersecting planes, yielding an uneven date display with the numbers being shown at different depths within the aperture. 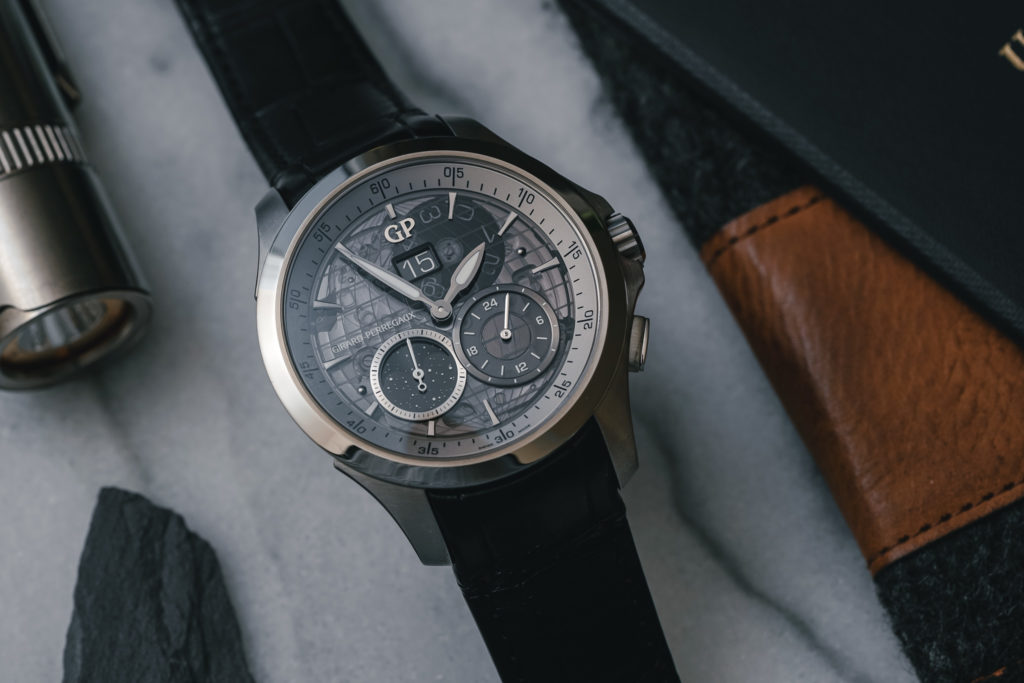 The date discs aren’t the only semi-transparent elements on the Traveller Large Date — this particular reference, the last in the series, was finished on a semi-smoky, translucent dial that shows the movement beneath. Upon the dial is printed a series of spherical meridian lines designed to carry the watch’s globetrotting theme, though I might have preferred one or the other: either a solid dial with the lines or a transparent dial without them, as they overly complicate the design a bit. There are earlier versions in the Traveller collection with the same complication housed in a plain white dial, which is far less interesting to look at, but a whole hell of a lot more legible. 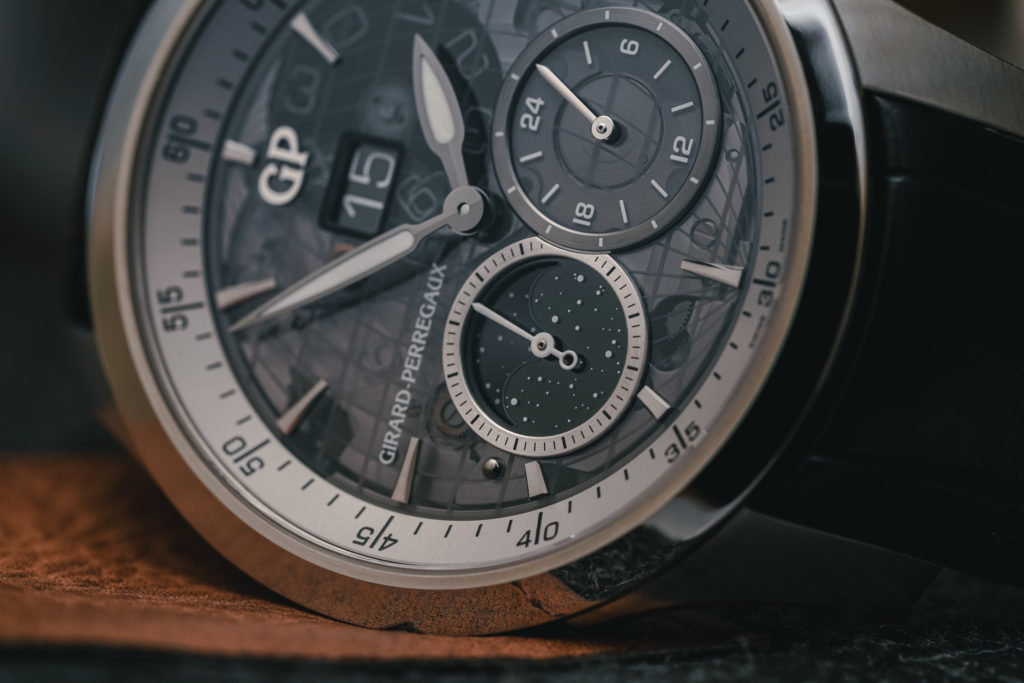 Perhaps the biggest quirk to this particular collection — and maybe what ultimately spelled its abrupt end — was the movement functionality. Built around a heavily modified version of Girard Perregaux’s in-house produced GP 03300 calibre (this is the same base movement utilized in pretty much all of GP’s three-hand models), the Traveller displayed an oversized date aperture at 12:00, an exquisitely detailed metallic moonphase display at 8 o’clock, and an independently adjustable 24-hour indicator at 4 o’clock, controlled via the adjacent pusher. This movement wasn’t technically new at the time; it had been used on earlier variations of the Laureato EVO (another wonderful collection that pre-dated the current modern iteration of the Laureato), albeit to a lesser degree of finishing and without the pusher adjustment. 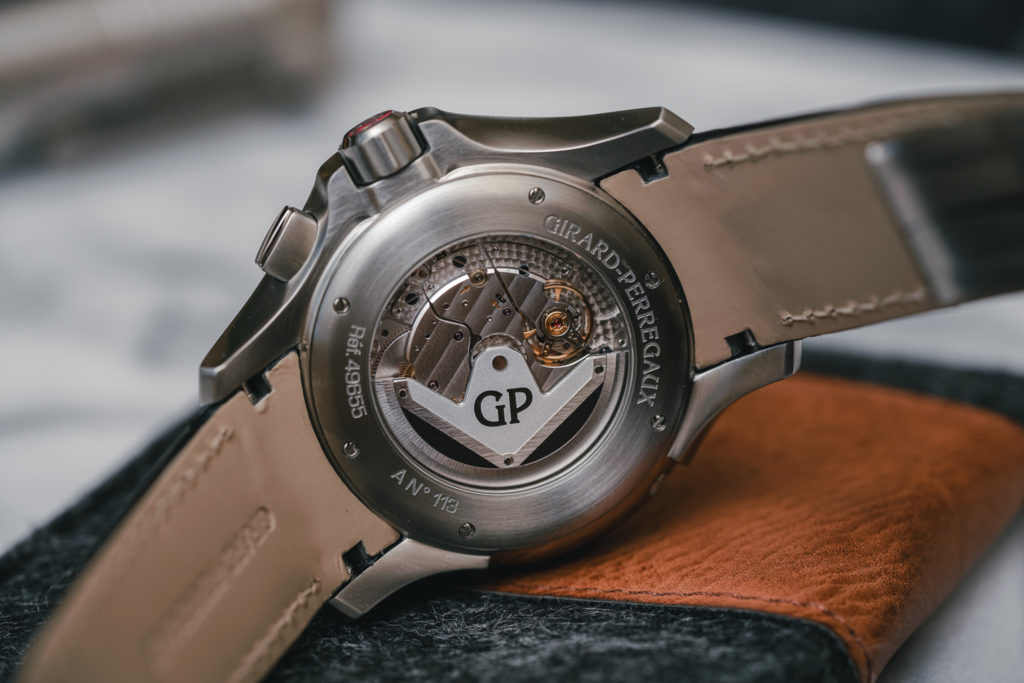 But what makes this iteration of the movement odd is that despite the watch being called “Traveller,” the pusher controls the 24-hour indicator — usually “home” time on a traditional travel-oriented GMT watch. In a perfect world, a set of pushers would control the main handset in single-hour bursts, either forward or back, depending on the direction being traveled. A sterling example of this particular execution would be the Urban Jurgensen One GMT or the more well-known Patek Philippe Aquanaut Travel Time (ref. 5164A), two watches which, sadly, have precious little competition in terms of both functionality and accessibility. Coming in at well under half the cost of either the aforementioned, the Girard Perregaux Traveller is just a few clicks away from perfection. 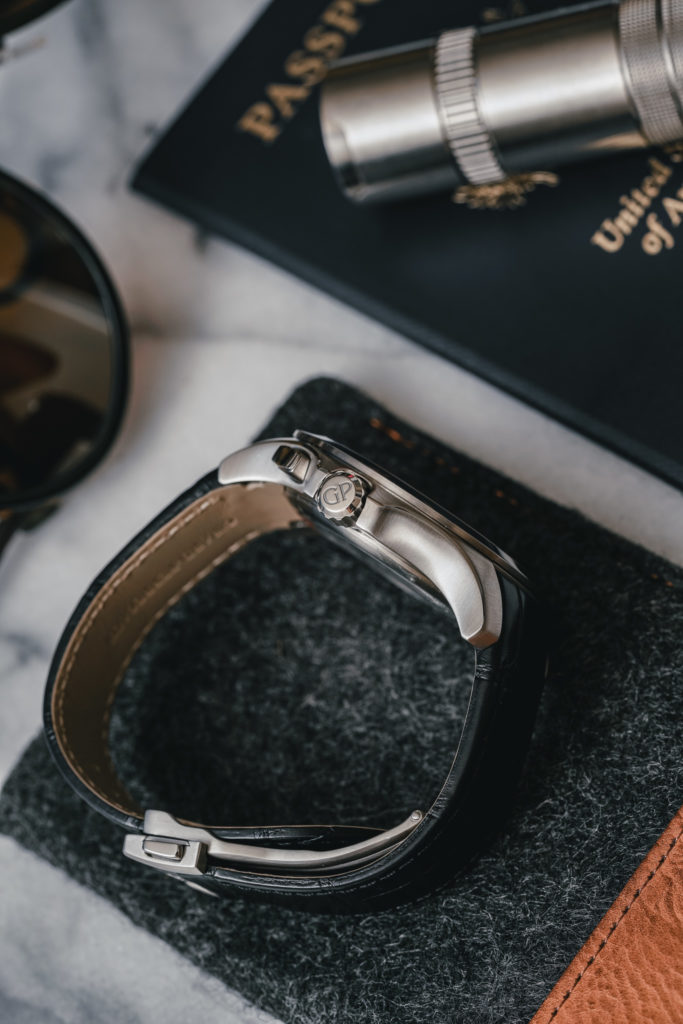 That said, as a “phone GMT,” where one conducts business with different time zones around the world, keeping track of a morning call with London, followed by a check-in with Singapore might require the use of a quick-adjust 24-hour hand, in which case the Traveller definitely excels. I could absolutely see this particular reference being popular among the finance crowd, where this everyday utility doesn’t come at the cost of some really great dial and movement finishing and a little exclusivity. The rest of us frequent fliers will have to wait for SIHH 2020 to see if Girard Perregaux revives the Traveller or re-deploys another version of this movement in the Laureato — fingers crossed for that extra pusher and functionality to give the globetrotting Aquanaut a rightful run for its money. For more info on the brand’s history and currently available watches, head over to girard-perregaux.com.