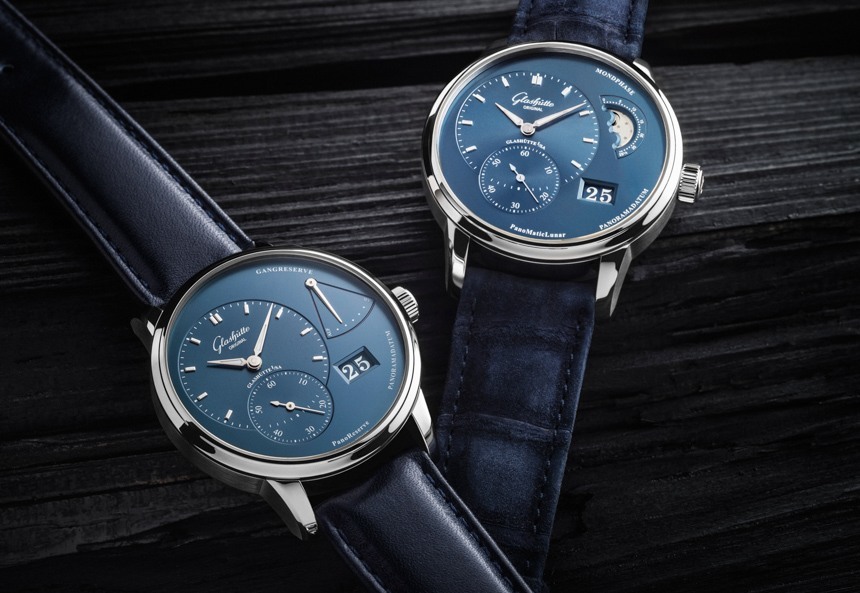 Every year, as the tsunami of major new releases of BaselWorld approaches, we also encounter a larger number of updates to existing models. One – well, two – of the more notable ones that were released just today are from Glashütte Original who announced two new-for-2015 versions of both their PanoReserve and PanoMaticLunar pieces. 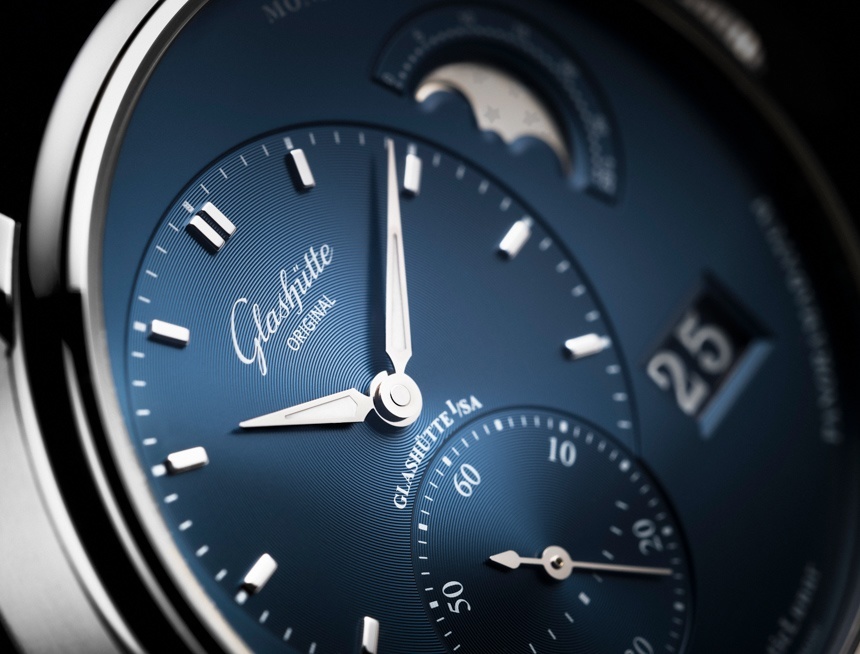 Both models see two new versions added to their respective lines of watches, including red gold cased pieces with a matte black dial and a stainless steel cased option with a deep blue dial. Glashütte Original has debuted its first “Pano” model in 2000 – in the same year the Swatch Group has taken over the brand – with the PanoRetroGraph. With that limited edition in platinum the Pano line was born, ready to be developed over the course of coming years; building around the original’s trademark design elements, such as the off-centered and overlapping sub-dials and the panorama date aperture. 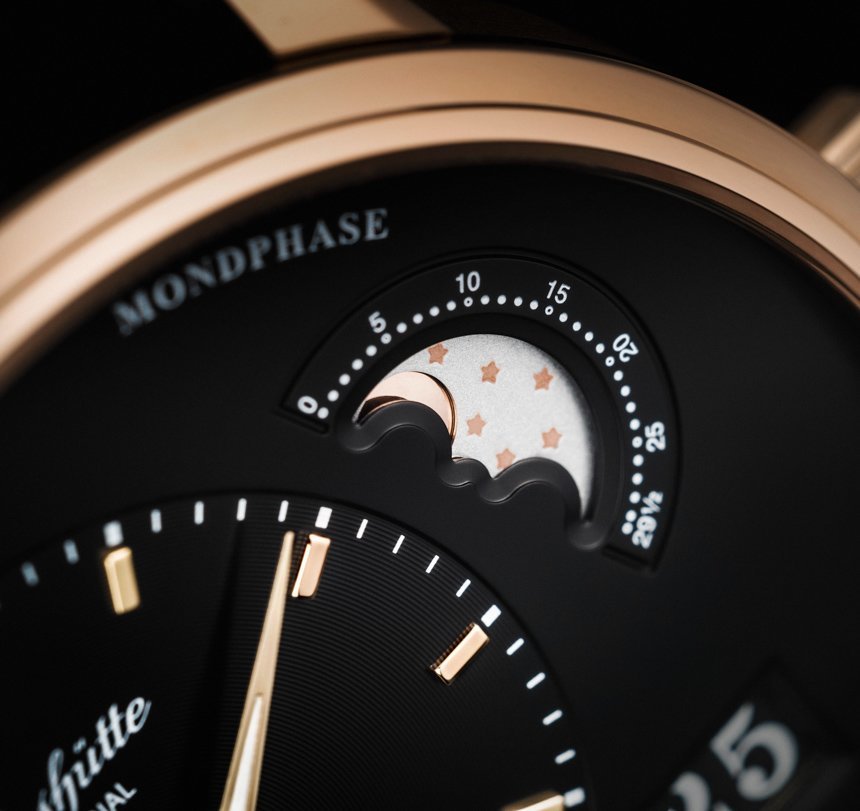 This layout is a given for all “Pano” watches and what’s interesting is that the additional complications are destined to be displayed at the 2 o’clock position of the dial, where there is enough space for them. As is the case with all cleverly designed off-center dialed watches, the appeal to most is that there is no overlapping of important functions on the dial, making for better legibility. Even the seconds sub-dial is placed in a way that it does not obstruct the view on the larger dial’s minute track: the seconds hand is at the 6 o’clock position while the meshing points of the two dials are where the 5 and 7 hour markers should be – contrary to what one would expect, such attention to detail is not all that common on dial designs. 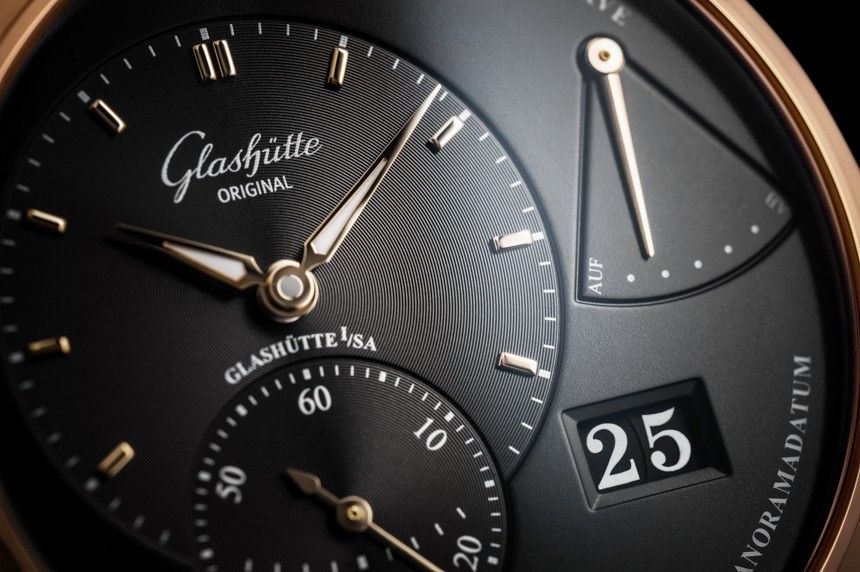 The PanoMaticLunar packs a moon-phase indication into the blank space at 2, accompanied by the “Panoramadatum” and the two sub-dials for the time – all courtesy of the 90-02 in-house made automatic movement. As we have seen from Glashütte Original on a few other occasions – say with the PanoInverse, for example –, moon phase indications are matched with automatic winding while the hand-wound version receives a power reserve indication on the dial side. That is the case with the PanoReserve as well, whose in-house 65-01 caliber provides 42 hours of power reserve. 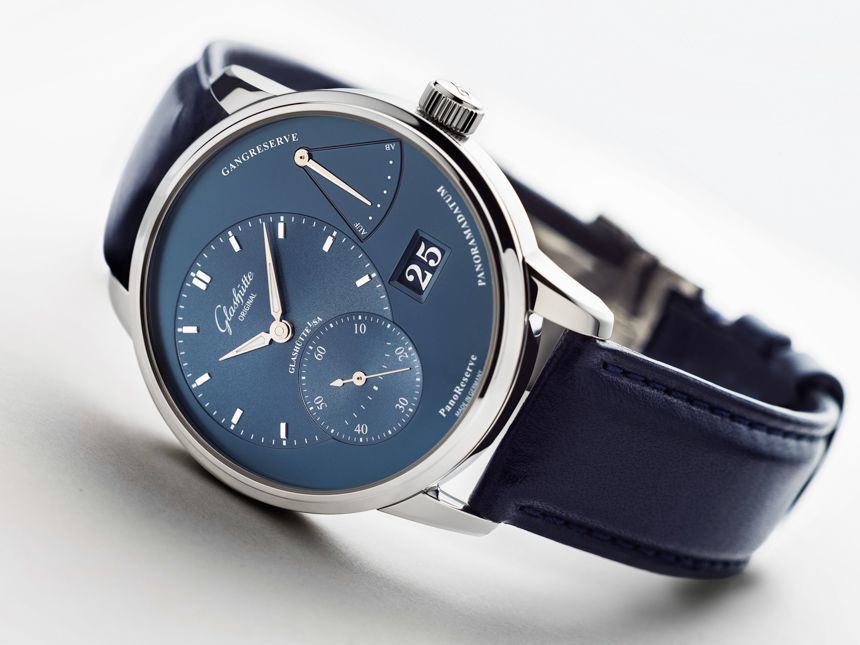 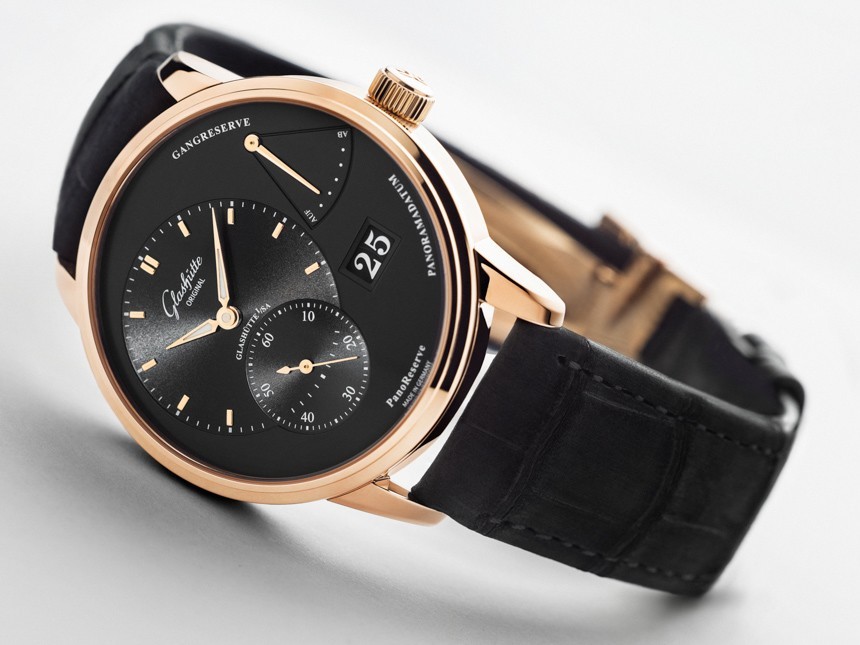 The new dial variations come from GO’s own dial manufactory, Deutsche Zifferblatt Manufaktur (DZM) in Pforzheim – a dial-specialist who Swatch Group took over in mid-2012. As always, vertical integration generally brings the benefits of added flexibility and shorter development times when it comes to experimenting with new designs – while it, of course, also cuts out competitors who used to depend on the same supplier before the take-over. 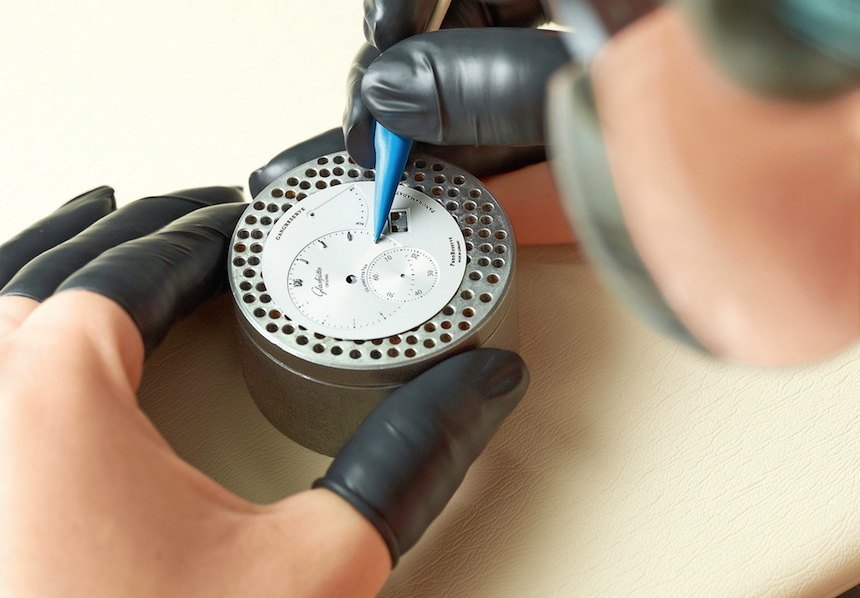 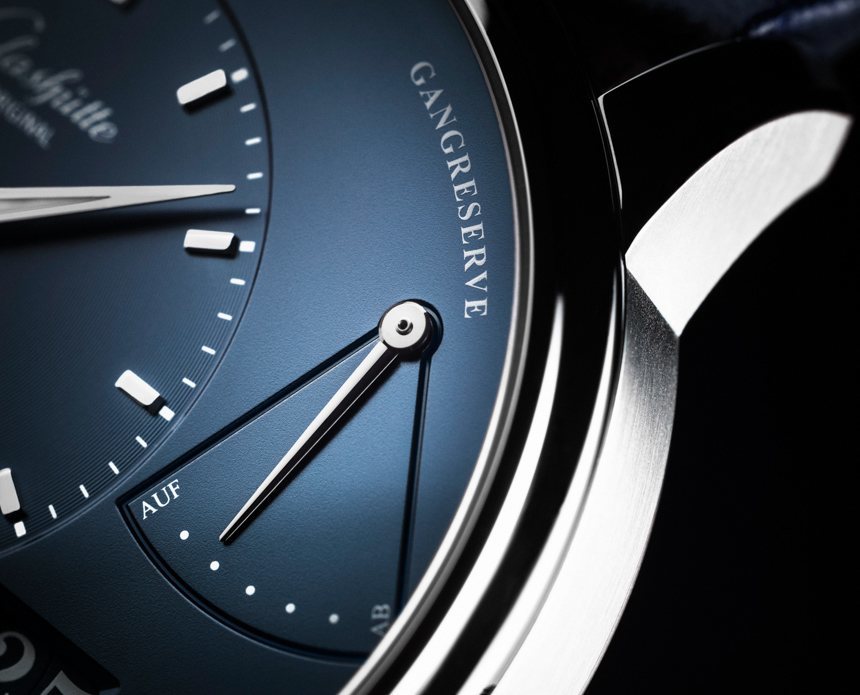 What I expect to be more important from these new releases are the two stainless steel models with the blue dials. We so often see luxury watch brands reserve the arguably rarer (and for some: more beautiful) blue dials to precious metal versions, while steel options receive the more usual white or black dials. With the new PanoMaticLunar and PanoReserve, Glashütte Original probably wants to cater to those who do not intend to pay the substantial markup that is present on most precious metal cased watches, but do want to get the eye-candy that these “galvanic blue” dials offer. That seems to be an intelligent decision and one that I feel should work out very well for them, given the relatively limited (albeit definitely existing) competition that is among high-end, blue-dialed watches in somewhat more affordable steel cases. 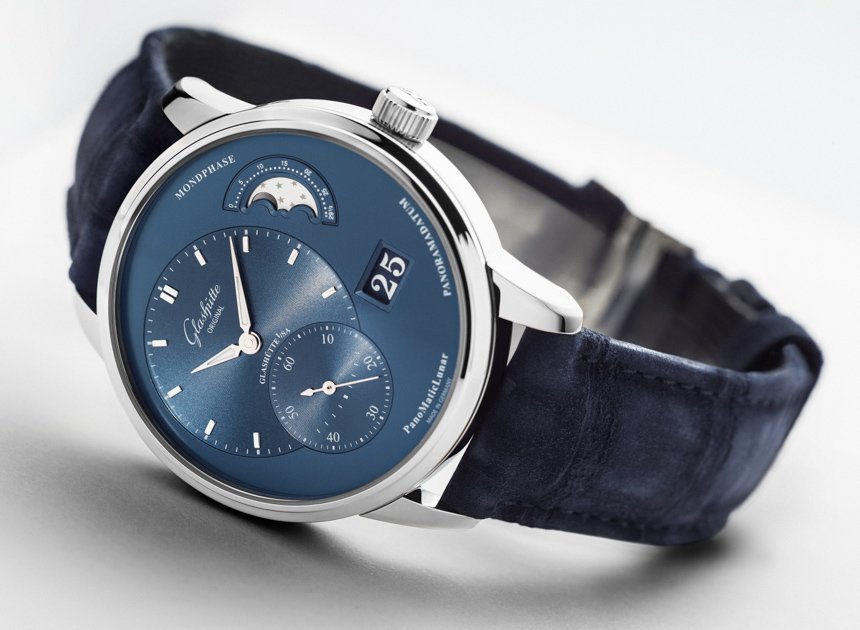 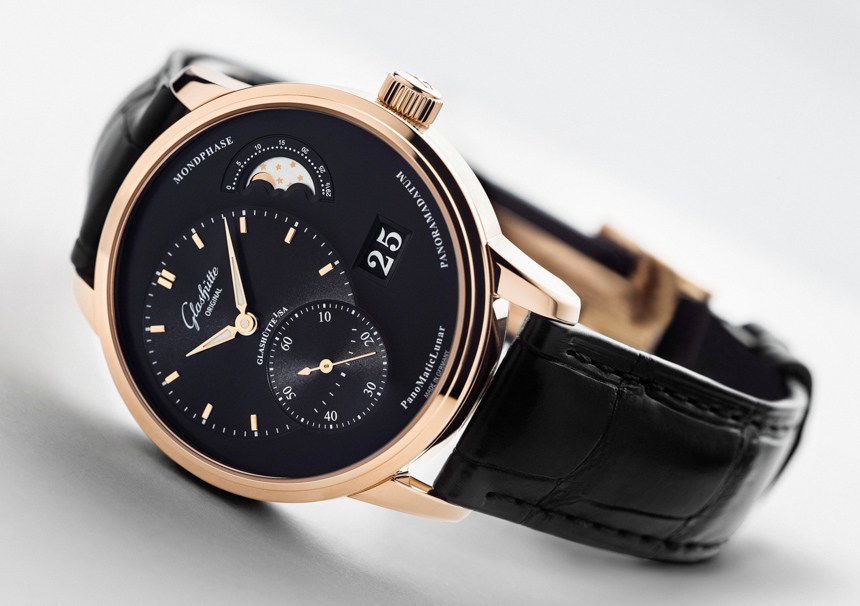 The red gold version is nevertheless stunning with its matte black dial and bright gold applied indices and hands. At a more reasonable 40 millimeter wide, both steel and gold versions of the Glashütte Original PanoMaticLunar and PanoReserve come in at a size where their powerful color combinations are not overpowered by a massive, more ostentatious size.

Beyond the case and dial color mix-and-match, the selection of straps bring one extra variable into the picture. The red gold models are offered with a choice of either a matte black Louisiana Alligator leather strap or alligator nubuck leather strap, while the steel versions are on dark blue calf leather or alligator nubuck leather strap. Official prices for the new versions are yet to be announced and we’ll update this post once they are available. glashuette-original.com