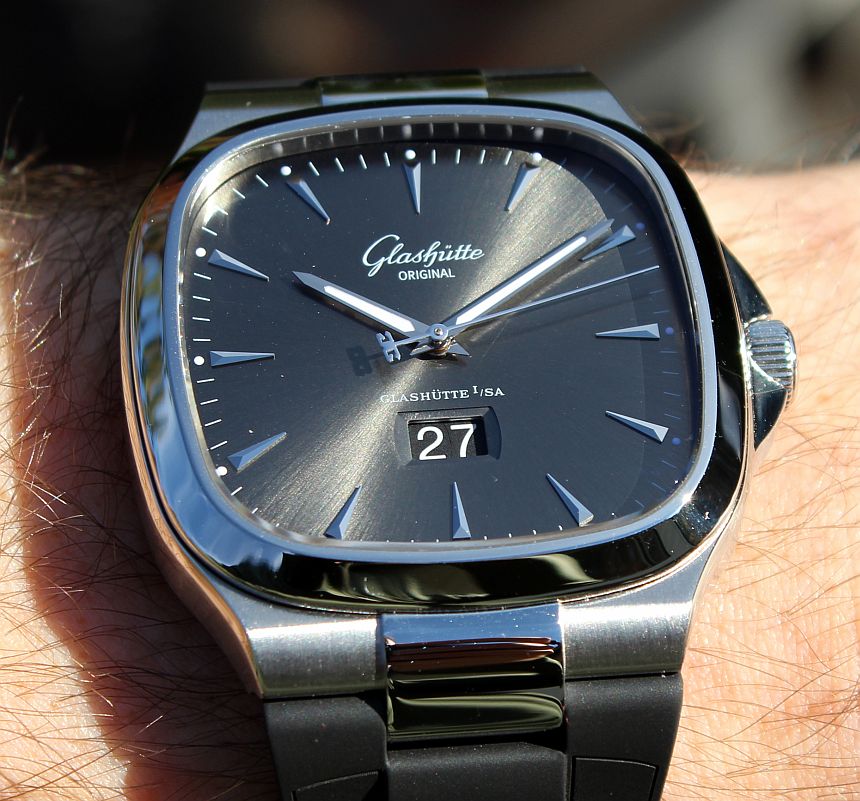 Today, we’ll have a look at a watch that Ariel first covered back in June of 2011 – the Glashütte Original Seventies Panorama Date. Of course that begs the question, to some extent, as to why we’re covering it again. The primary reason would be that there have been some new strap options coming into the mix, but also for the simple fact that, back in 2011, it was impressions from the show floor. Now, we’re bringing you a full, hands-on review of this German timepiece.

This is my first experience with the Glashütte Original brand, and I think it’s made for a nice little introduction (hopefully for a few of you, as well). As you may guess by the name, this watch pulls some design influences from the 1970s, and it thankfully does so without being overly “old” feeling. To start with, you’ve got the stainless steel case, which measures in at 40mm square, and is 11.5mm thick. As Ariel noted in his writeup, it’s a sort of squared-off cushion style – which means it’s right in my wheelhouse, as I seem to have a fondness for that case style. 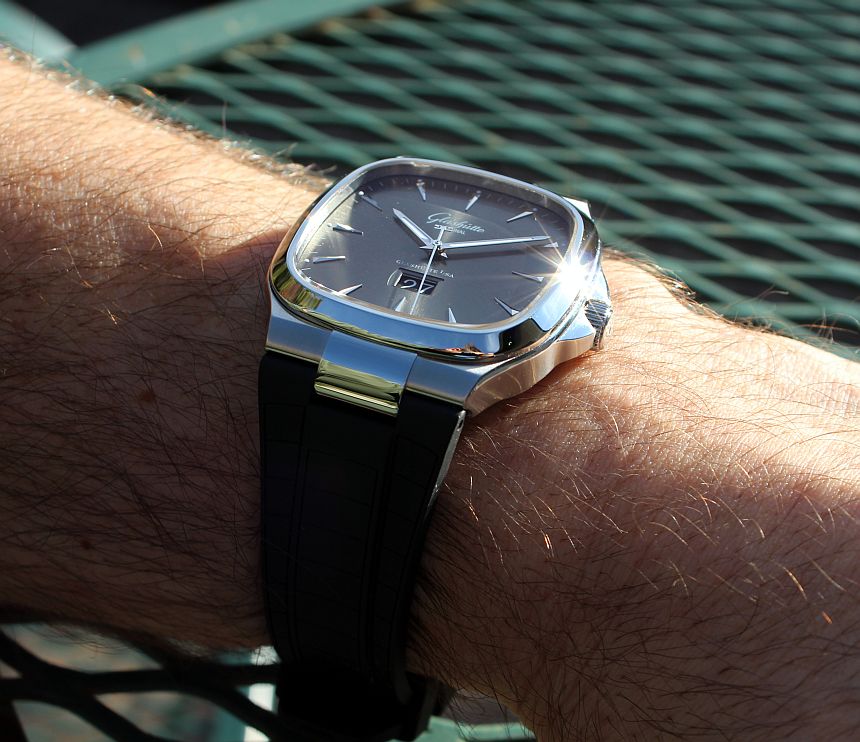 Next up from the 70’s soundtrack, you’ve got a galvanized dial (our sample was in gray) with its sunburst pattern radiating from the center. They’ve also eschewed numerals on the dial, instead opting for polished arrowhead style indices as hour markers. This too feels like a retro cue to me – as well as giving the dial a bit of flash that it might otherwise miss. Aside from making it visually interesting, it lets the watch work for all but the dressiest of occasions.

Then again, with the new rubber strap (it’s this strap, plus alligator leather, that are new this year), this flips back over to the sporty side of the spectrum. Add in those lumed hands, and the (almost) hidden lumed pips on the outside edge of the indices, and you’ve definitely got a watch with some sporty leanings. So, what kind of a watch is it? Is it a sport watch, or is it a dress watch? Frankly, I think it works well in either scenario. Obviously, you’re not going to go hiking with this watch, nor are you likely to pair it with a tuxedo (at least on the rubber strap – with the leather or bracelet, you certainly could). So long as you’re not in those edge cases though, I think you’re good to go. In other words, this watch will work well for most day-to-day activities. 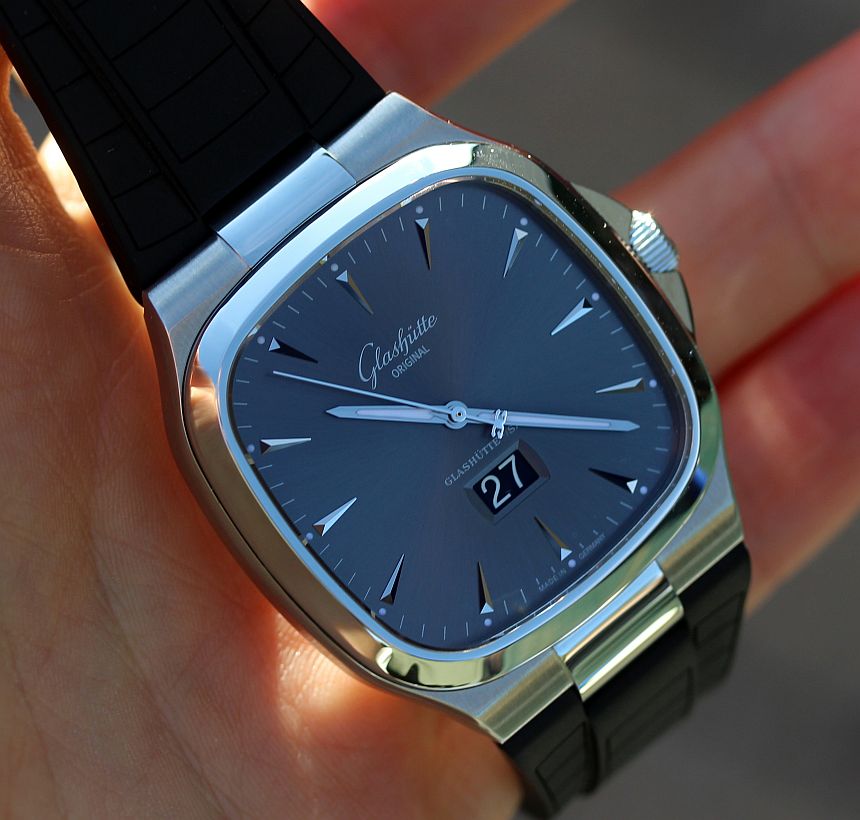 That’s precisely where it excelled for me. The relatively thin case fit well to my wrist, with the deployant clasp on the rubber strap locking things snugly into place. One note on that deployant, especially if you’re used to adjusting it out (or in) a notch throughout the day, Glashütte Original relies on a screwed-in post to hold the position, so this is definitely not a quick change scenario. Not a big deal, but something I thought I’d note.

Also of interest (while we’re talking about the strap), is the fact that they commonly mount the strap reverse to what we’d normally expect. What I mean by this is that the short end of the strap (with its attendant keepers) is mounted at the bottom edge of the case, rather than the top. Since we’re working with a deployant on the watch, this isn’t a difficulty for taking the watch off, or putting it on. It’s just another visual difference for the piece, and something to mention. Of course, your retailer can easily reverse this, if you so desire. 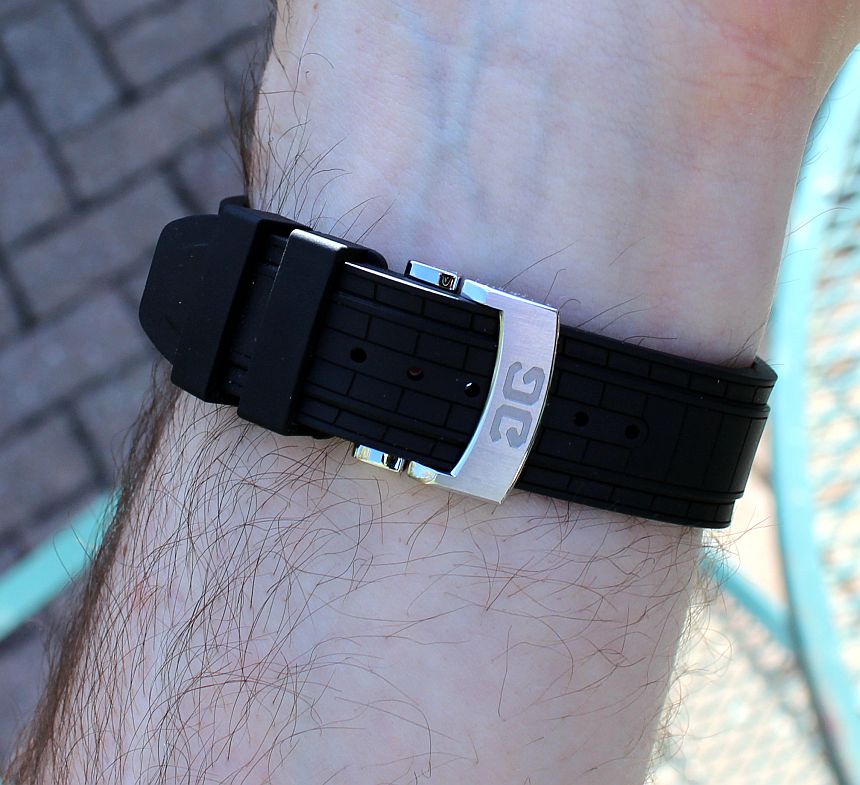