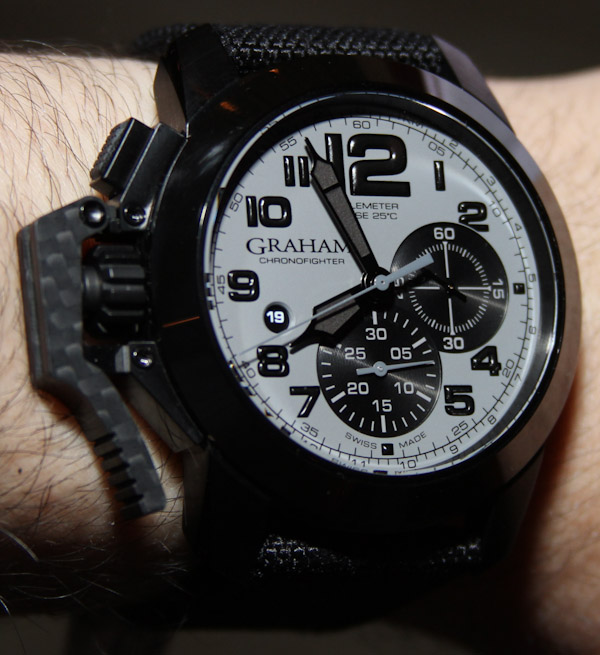 Few brands have given me as much to discuss as Graham. Over the years I have used Graham watches as a springboard to discuss a range of topics from my love of large watches to my disapproval of the term “Oversize” – as applied to most things that use the term “Oversize.” I’ve found myself blogging at length around pictures of Graham watches about things that have little to do with Graham watches. Oh Graham, I feel like we know each other so much and so little at the same time.

Lately Graham USA sat down with me and we were able to chat. I learned a lot about you Graham, and was able to have a little bit more of an intimate experience with your watches. Yes, that is as racy as it sounds. Nothing like a steam room with nothing but oversize watches sticking to your skin. That latter part may not have happened… or maybe it did. 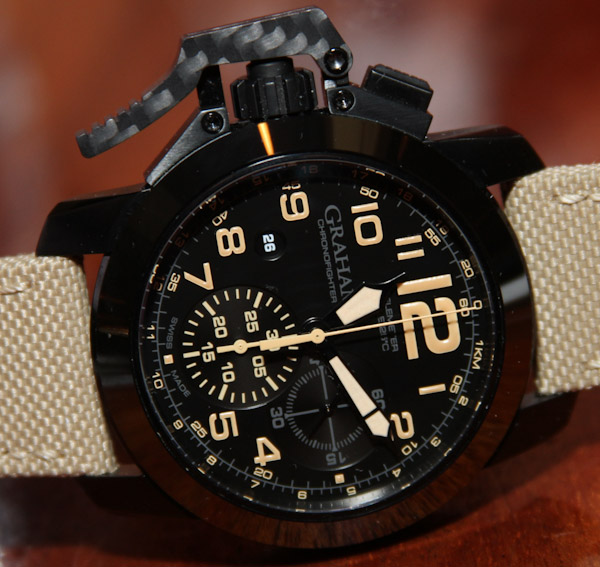 The first thing I learned is that Graham is a Swiss watch brand. I and others seemed to feel there was an English side to them. It is true that the name of the brand comes from the British clock maker George Graham who lived during the end of the 17th century to the beginning of the 18th century. There are also some pieces with British racing green colors, and perhaps some other English flair. Nevertheless, the watch is totally Swiss straight outta La Chaux-de-Fonds.

Last, I learned that most of their non standard ETA movements are built for them by La Joux Perret. This isn’t exactly news, but it is interesting as I have been watching La Joux Perret closely as of late. You may or may not know that Japanese watch maker Citizen bought La Joux Perret outright and as far as I know, I am not sure what they plan to do with them. If they are daring and brave, then they will use La Joux Perret to build a massive Swiss watch movement maker to fill in the gaps where ETA has stopped supplying watch movements and parts. Citizen already is behind movement maker Miyota that sells movements to third parties. Anyhow, back to Graham. I swear, I really can’t discuss them without going off on tangents! 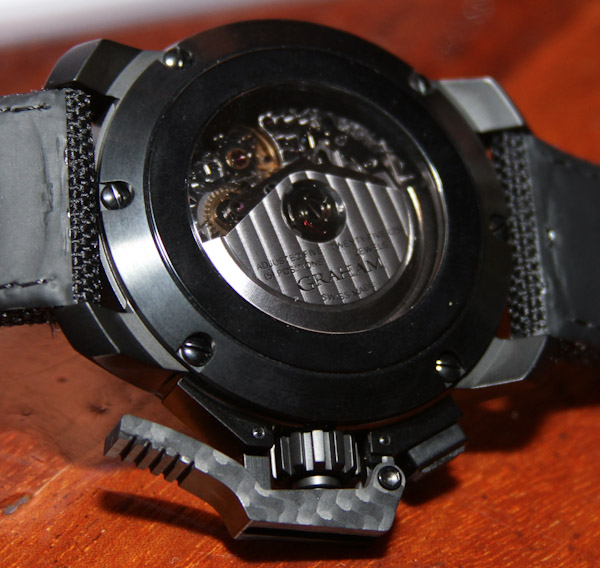 Four paragraphs into this article and I get to the main attraction, these new second generation Chronofighter Oversize watches. Pictured, you’ll see the Black Sahara and K2 versions. There are three more versions available called the Raptor, Amazonia, and Black Forest versions. Both of the pictured models come in PVD black steel cases but with different straps and dials. By the way, according to Graham these are all “Wildlife Chronographs.” You can see that the names are all nature related, but isn’t “Raptor” a bit out of theme? Plus, I am going to call the Black Forest piece the Black Forest Cake watch. Why? Cause it’s soooo riche. 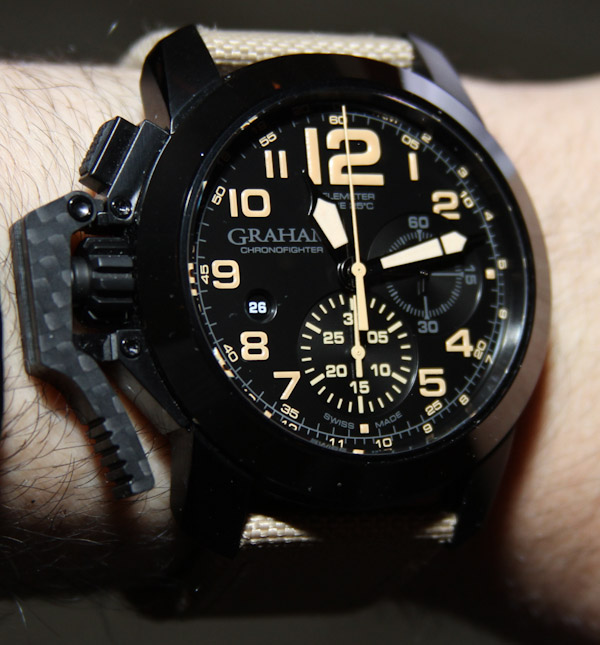 Compare the first and second generation Chronofighter Oversize watches together and you’ll notice some appreciable changes. First is the trigger system which has been cleaned up a bit and now comes in a solid piece of hard carbon. The trigger system for the chronograph is really a key element to the collection. The way it works is simple. Graham designed the chronograph pushers to be at 10 o’clock and in the crown at 9 o’clock. The trigger goes over the crown and is pressed at 8 o’clock – though it presses the pusher in the crown. This trigger is the start and stop pusher, while the pusher at 10 o’clock resets the chronograph. On these Wildlife Chronograph models Graham opted to remove the 12 hour counter making them 30 minute chronographs. This is probably because in the wild, nothing you want to time ever lasts more than 30 minutes. The watch also has a telemeter scale around the periphery of the dial. Such numeric tracks almost universally help a dial look more professional and instrument-like. Plus, according to Graham, you can use it to see how far away lightning is from you. Yea, finally a high-end mechanical Swiss watch for lightning chasers. By the way, with all the “water resistant this” and “anti-that,” I am still waiting for the first “lightning resistant” watch. Seriously, I need a watch like that and am pretty sick of waiting.

The new chronograph trigger system with its carbon trigger is well done and is smaller than the first generation trigger I believe. I also believe that the watch is overall lighter. Another great new feature is use of a black ceramic bezel. On these models the bezel is polished, and will of course lead to a more scratch resistant bezel surface. At 47mm wide, the steel cases feel good on the wrist, and not at all oversized. Over the dial is an AR coated domed sapphire crystal and the cases are water resistant to 100 meters. 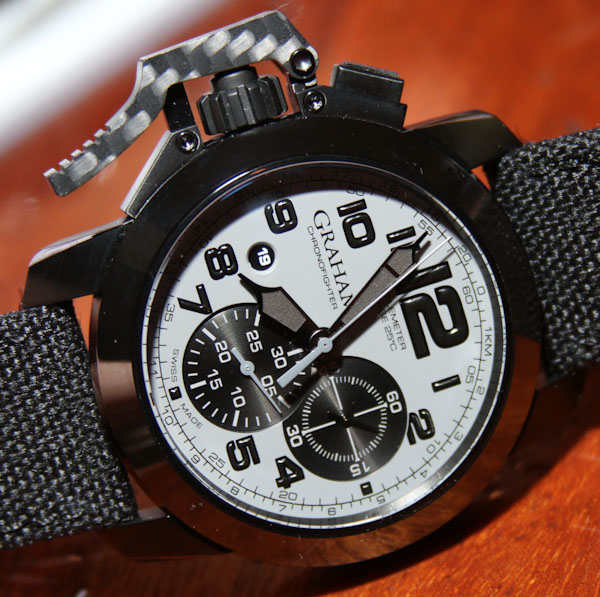 The dials are attractive and really make the Chronofighter Oversize watches what they are. Visually balanced, the dials are also really legible with large hands and lots of lume. Out of all the Wildlife Chronograph models the Black Sahara is my favorite, as is the Amazonia (similar, but with green not beige accents). I also like the use of black date discs behind little round windows.

Attached to the Graham Chronofighter Oversize Wildlife Chronograph watches are textile straps of various colors. Nothing says wildlife safari like a fabric strap to remind you of what types of tents our forefathers slept in. Inside the watches is the Graham caliber G1747 automatic chronograph movement which is a flipped and modified base ETA 7750. Overall these are fun watches with a lot of wearability as well as character. Well done and I certainly like where (Swiss) Graham is going. Price is $6,900.