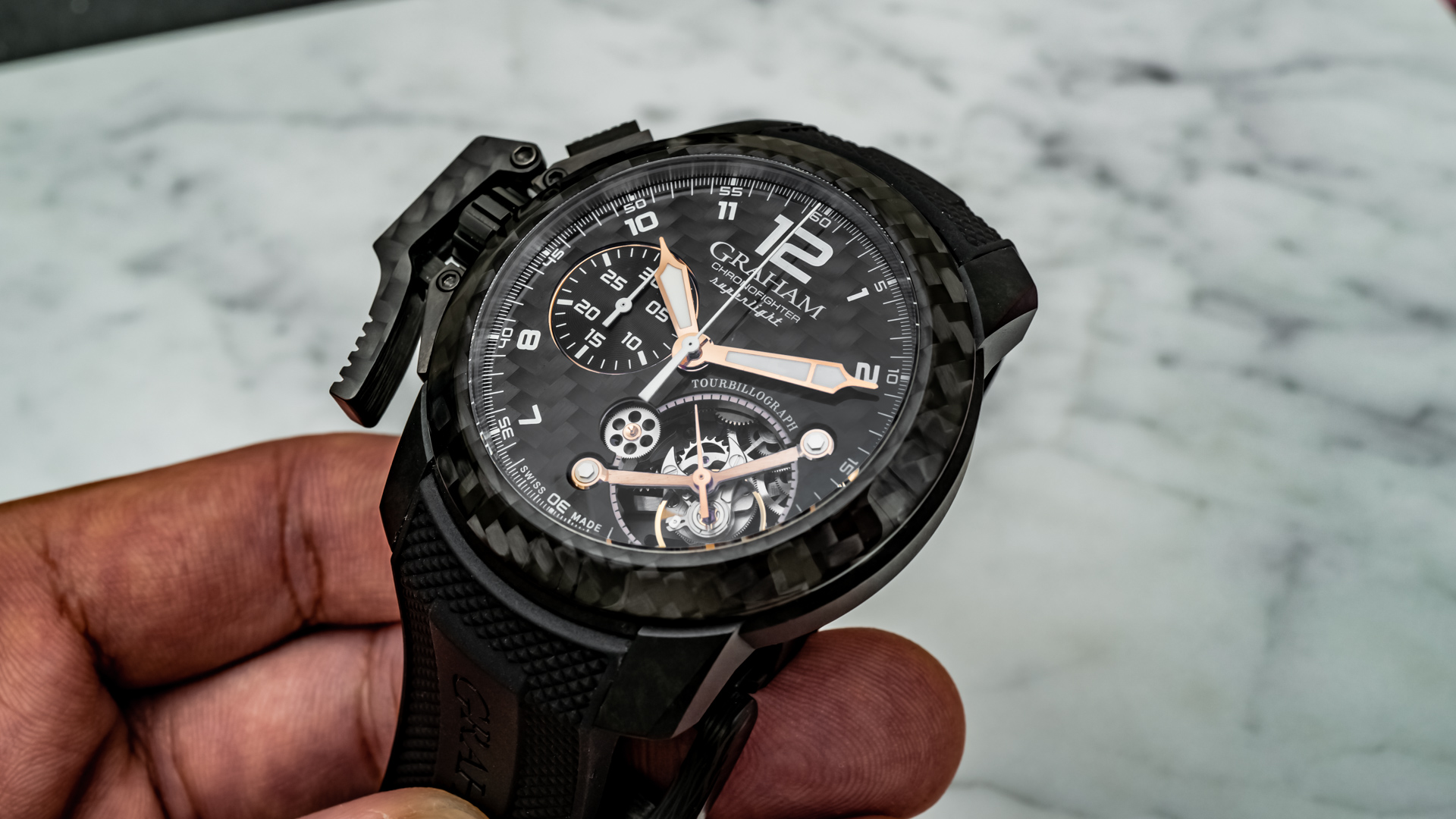 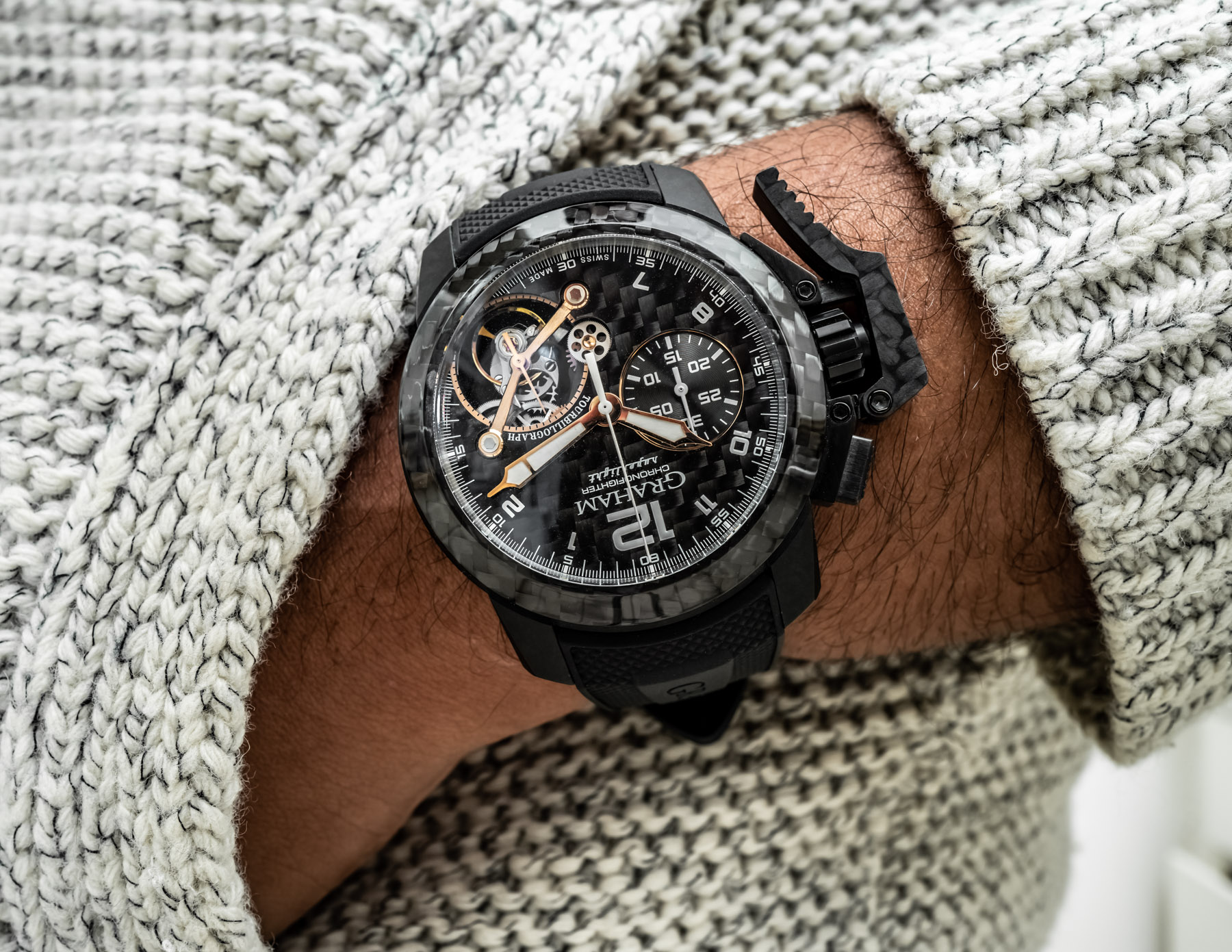 I have a soft spot for watch brands that lean into doing things a bit differently, and the Graham Chronofighter is up there as a divisive design signature that has defined the brand. The chronograph trigger on the left side of the case was inspired by a countdown timer watch that Universal Geneve developed for the Italian Air Force back in the 1930s and has been a staple of the Chronofighter for about 20 years now. But does the unconventional military-inspired design translate when we’re talking about a complication like a tourbillon chronograph rather than a casual sports watch?

Limited to 100 pieces, the Graham Chronofighter Superlight Carbon Skeleton Tourbillograph is all about being big. At 47mm-wide in a very lightweight black carbon case, it’s also got one of the biggest tourbillons around that I’ve seen. Vintage military design, modern case construction, and legit horological chops all make for what is overall a pretty compelling package for an admittedly niche person — that is, if your wrist and wallet are big enough.

While the case size is 47mm-wide, that’s without the chronograph trigger. My calipers have it at 57mm-wide with the trigger, 17.5mm-thick, and with a lug-to-lug height of 55mm. What’s also big is the tourbillon, which I don’t have a precise measurement for, but the ends of the bridges are about 21mm apart. I think a more conventionally sized smaller tourbillon would look funny in a watch this big and aggressive, but Graham pulled it off. 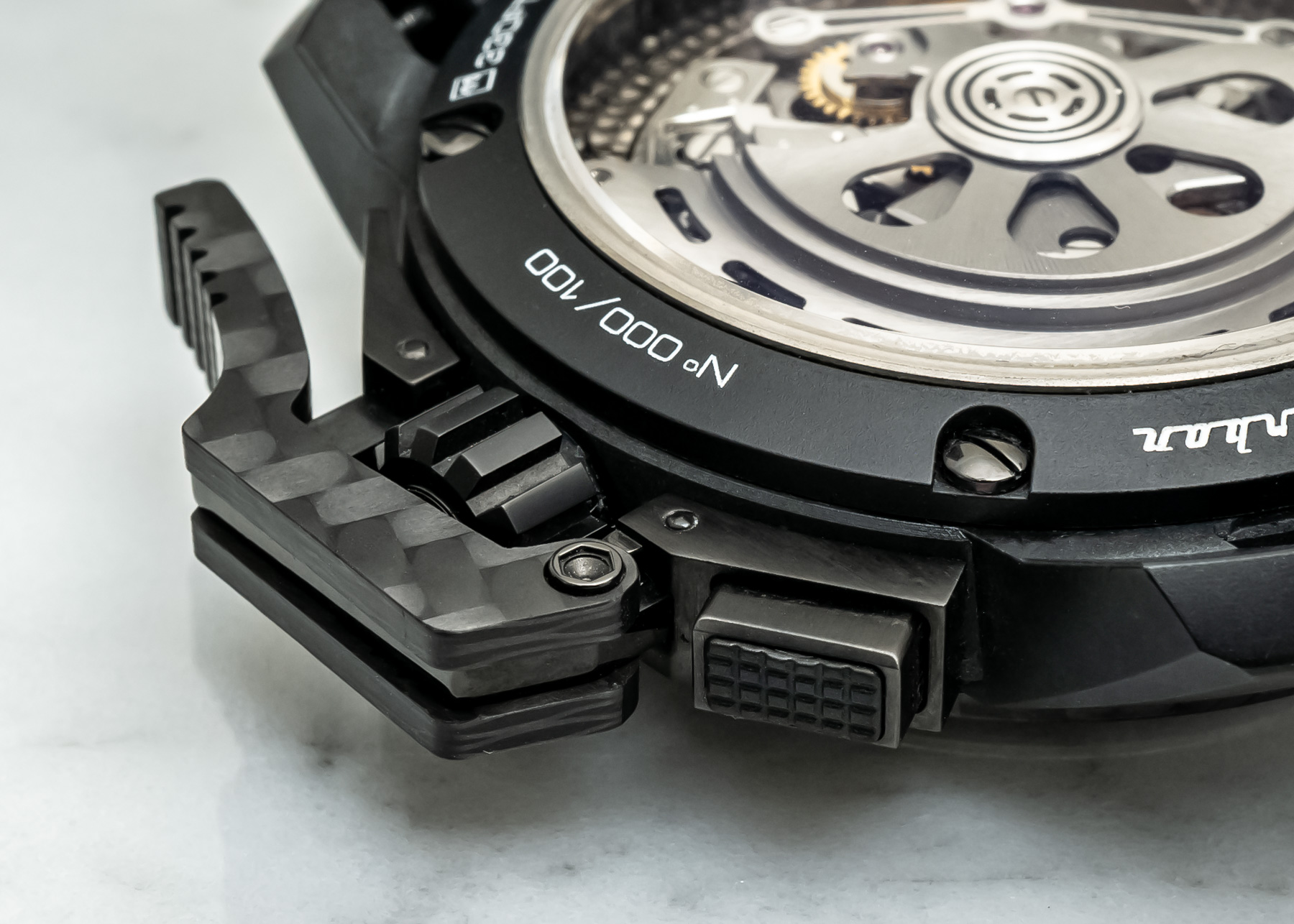 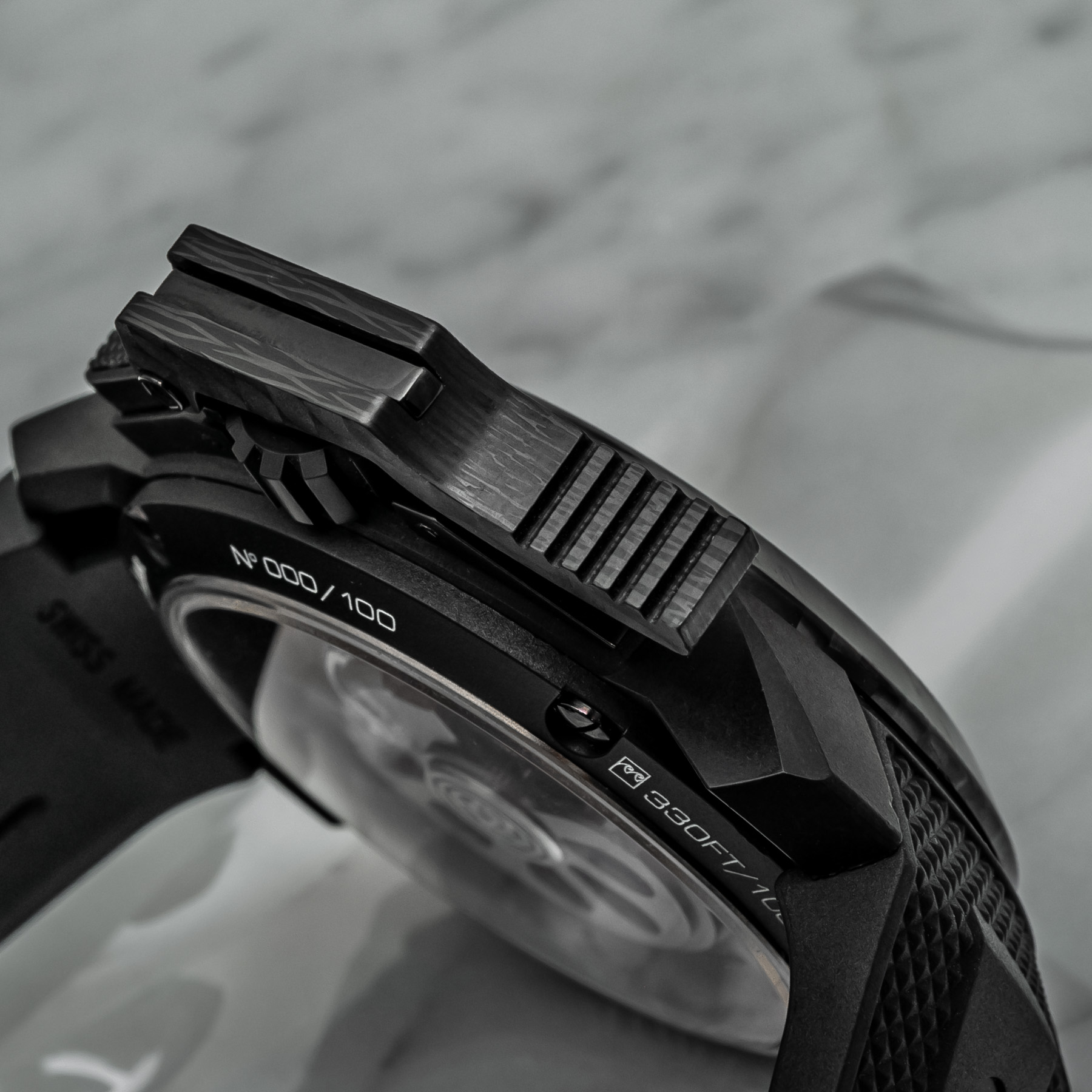 The watch is really light, though I felt a little silly being surprised when I first picked it up considering “Superlight” is right there in the name. Still, the large case size and aggressive design don’t betray the 100g weight (which is just about what a Tudor Black Bay on strap weighs). This is, of course, due to the black carbon composite case, though the tourbillon cage itself comes in at 0.485g, which is a feather more than the 0.403g weight of Audemars Piguet’s tourbillon cage used in its current production models.  Watch media can get a little overexcited in covering the newest record-breaking thinnest or lightest watches, but the reality is that while the Graham isn’t any particular record holder, it’s about as light as I could perceive a watch this size on my wrist to be. 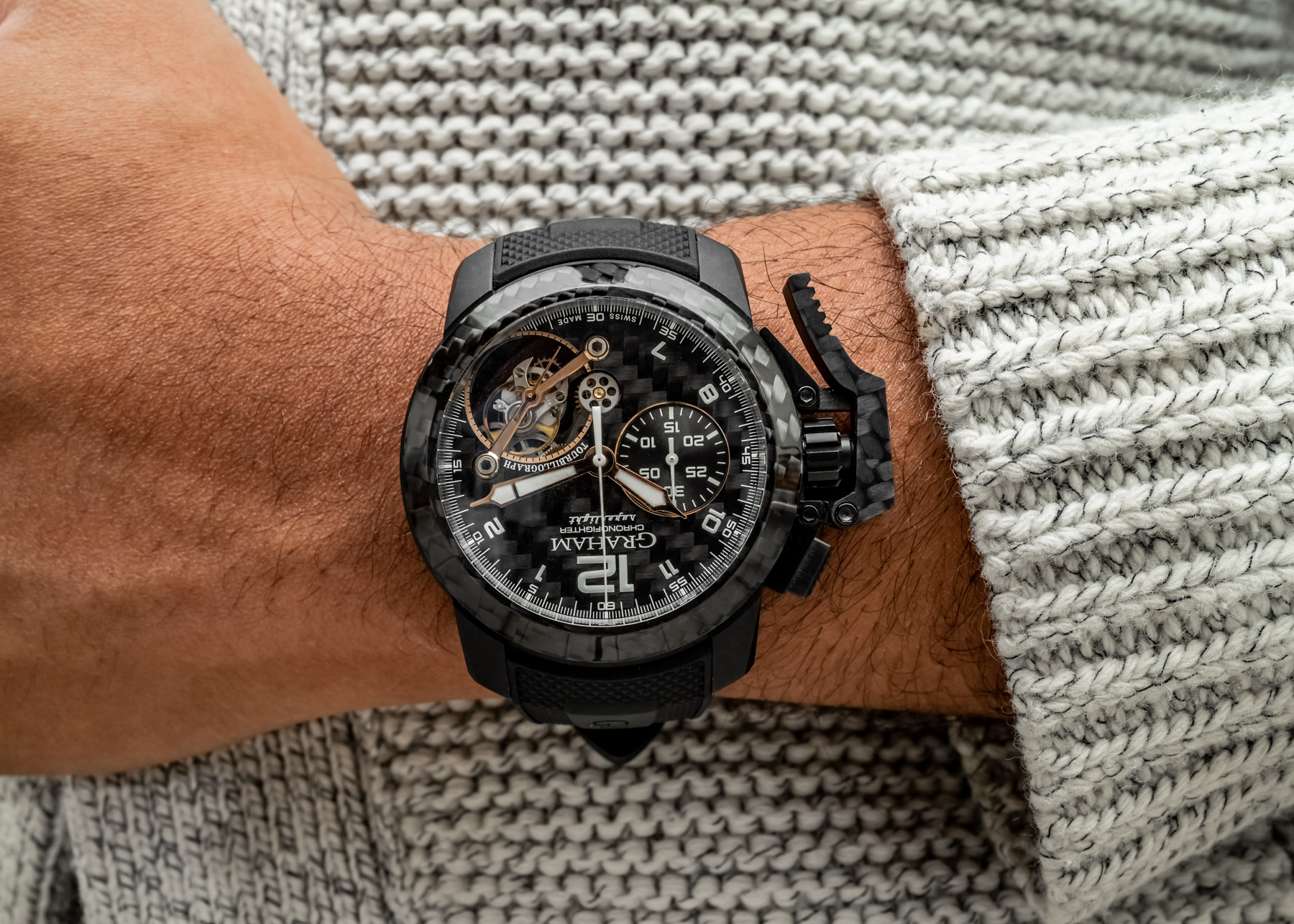 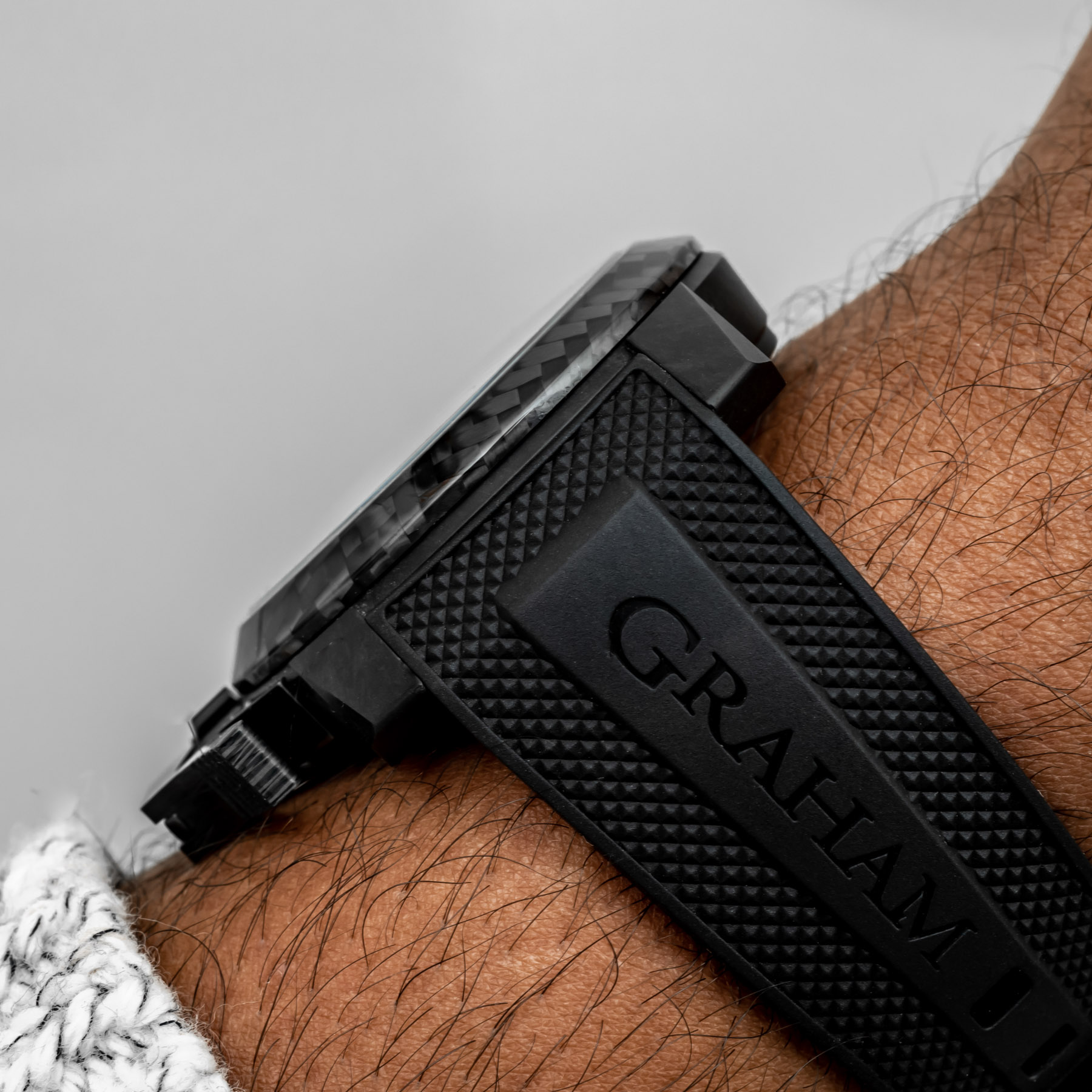 While it’s certainly big for me, if your wrist circumference is > 8 inches, the Chronofighter Tourbillograph really is pretty practical when you consider its unobtrusive weight and 100M of water resistance. The chronograph trigger on the left side of the case is a quirky design signature, for sure, but at least it’s not going to be confused with anything else out there, which is more than I can say for a lot of watches.

I’ve worn more large watches than I can count that have a traditional crown that digs into my hand. Not a problem here, as the chronograph trigger, while large and protrusive, is not felt or noticeable at all on the wrist. 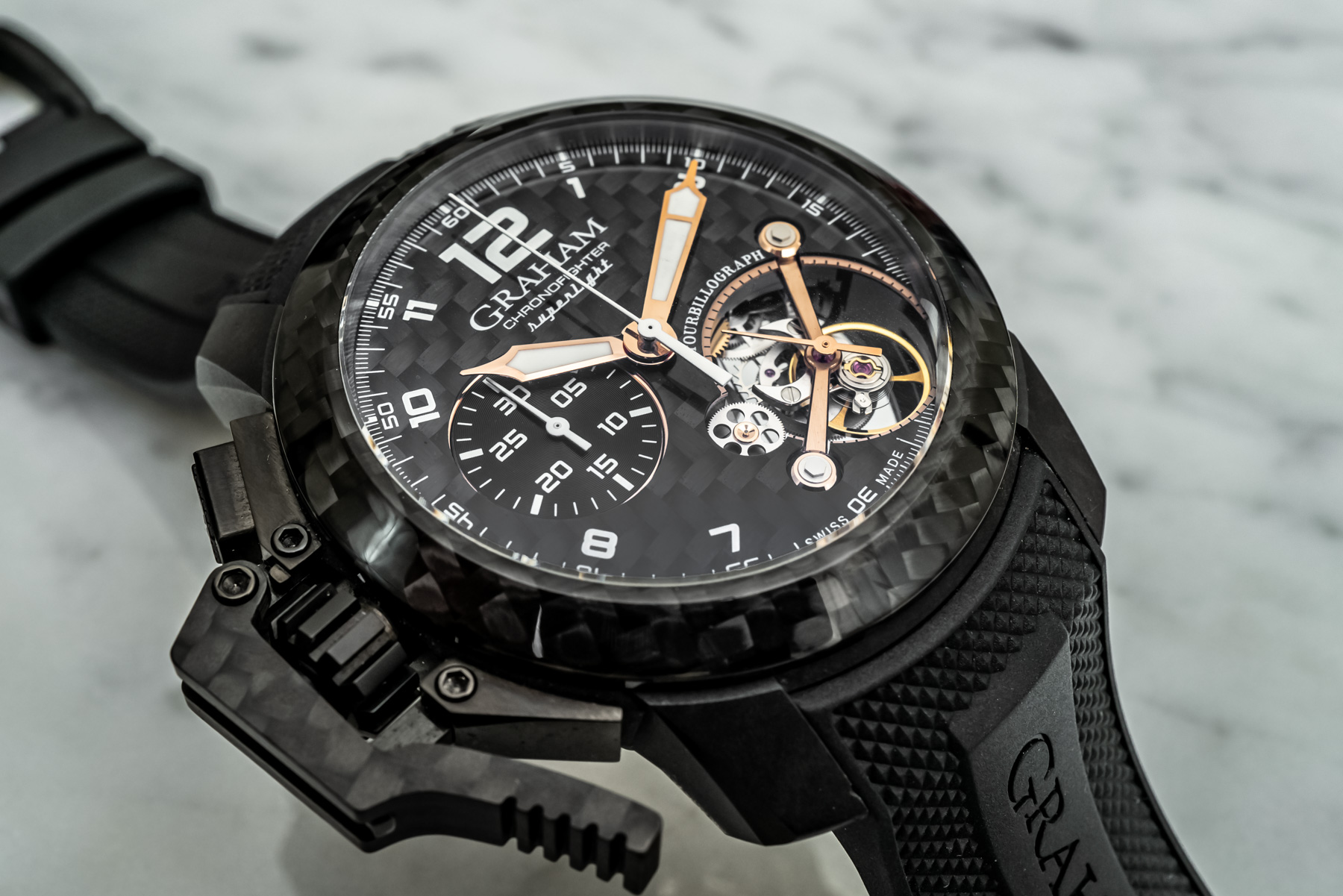 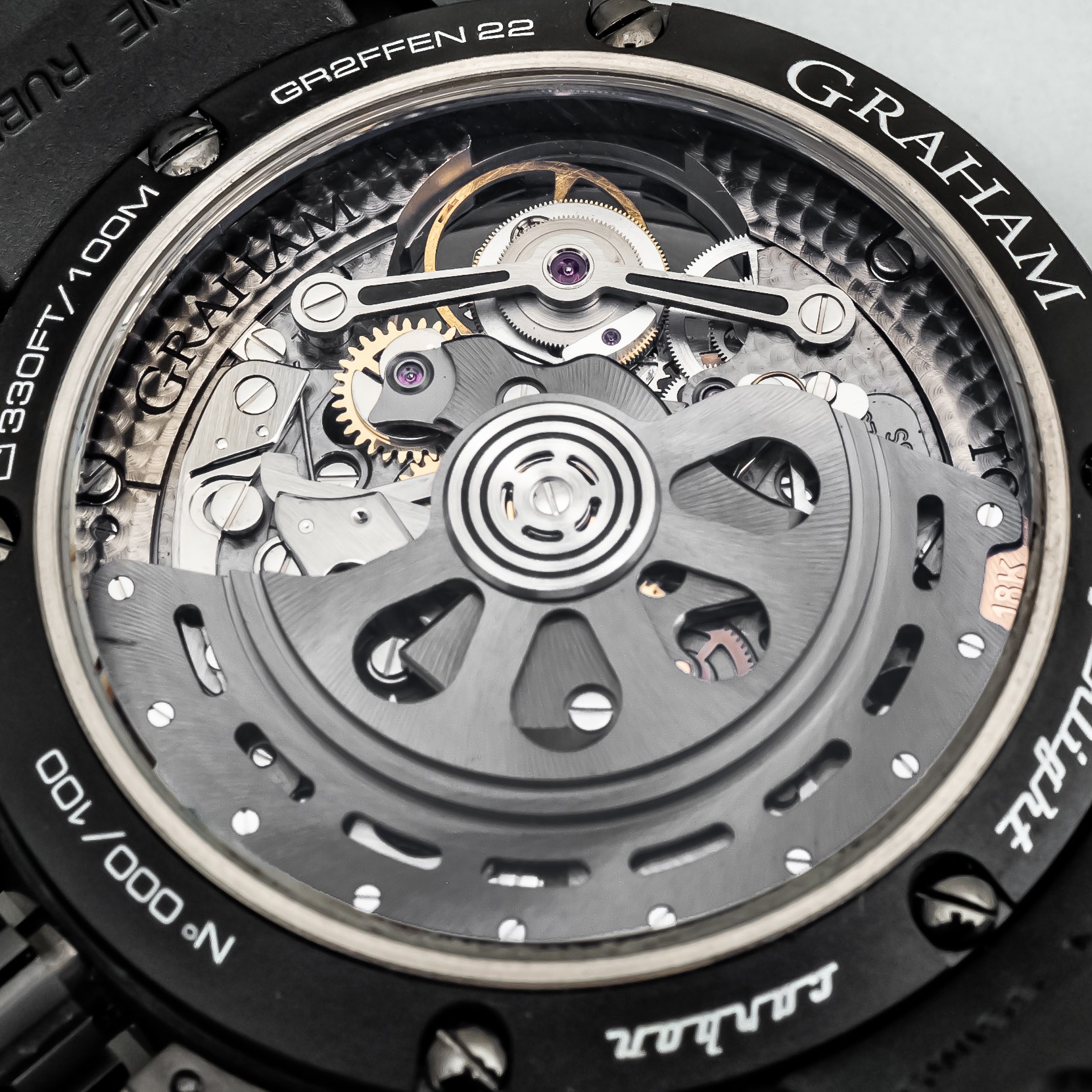 The G1780 is an automatic column-wheel chronograph and tourbillon that Graham first introduced about 10 years ago when it was outfitted in a watch from the brand’s Silverstone collection. This movement was made exclusively for Graham by La Joux-Perret and, while it’s not new, it’s actually got some interesting stuff going for it. First off, it’s rare to see a tourbillon that is integrated into a column-wheel chronograph, the wheels of which you can see at work through the tourbillon cage. Operating at 28,800 vph with a 48-hour power reserve, the G1780 is hand-finished with Geneva stripes, perlage, chamfering, and polished edges. The column wheel has parts of the base cog wheel polished in order to reduce friction, as well. The tourbillon cage is comprised of 48 parts, several of which are done in 18k gold, like the upper tourbillon bridge and oscillating rotor. 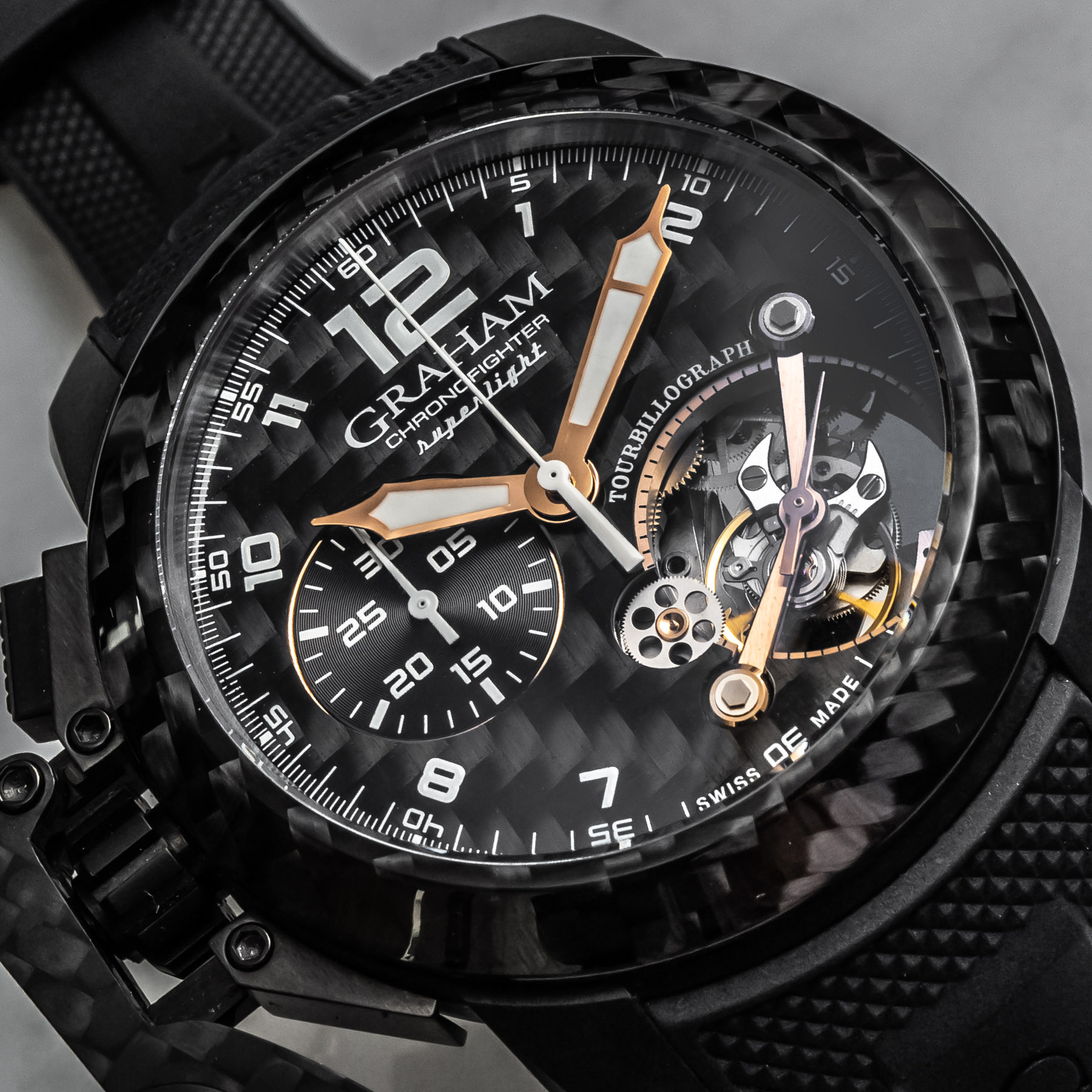 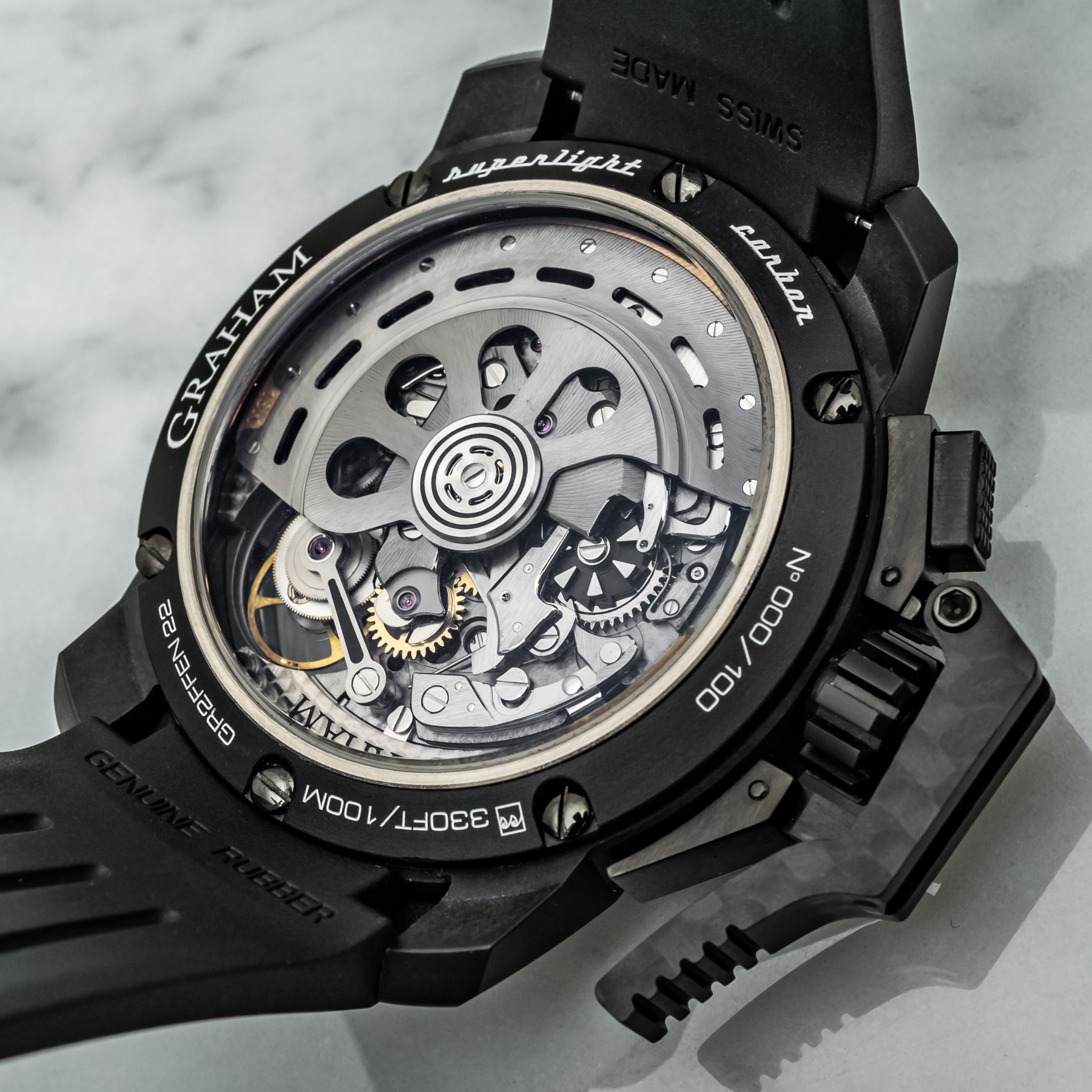 The movement is Chronofiable-certified, which isn’t a household name like COSC or other tests, but it’s noteworthy, nonetheless. Carried out at Laboratoire Dubois in La Chaux-de-Fonds, the Chronofiable certification has to do with the durability and toughness of the watch and movement. This process simulates shocks, acceleration, and temperature changes over 21 days, which is equivalent to six months of wear. This is the same certification you’ll find on some Richard Mille watches such as the RM 035 Rafael Nadal, though I believe they now have an in-house test. La Joux-Perret has two patents having to do with protection of the tourbillon, which they call a “shockproof” tourbillon. In addition to Incabloc shock absorbers, they reduced the tourbillon down to as few components as possible and constructed a double-bridge for rigidity and stability.

Given how delicate tourbillons can be, I think the reassurance of the Chronofiable certification is pretty important if you want to actually wear this watch around as its meant to be without worrying. 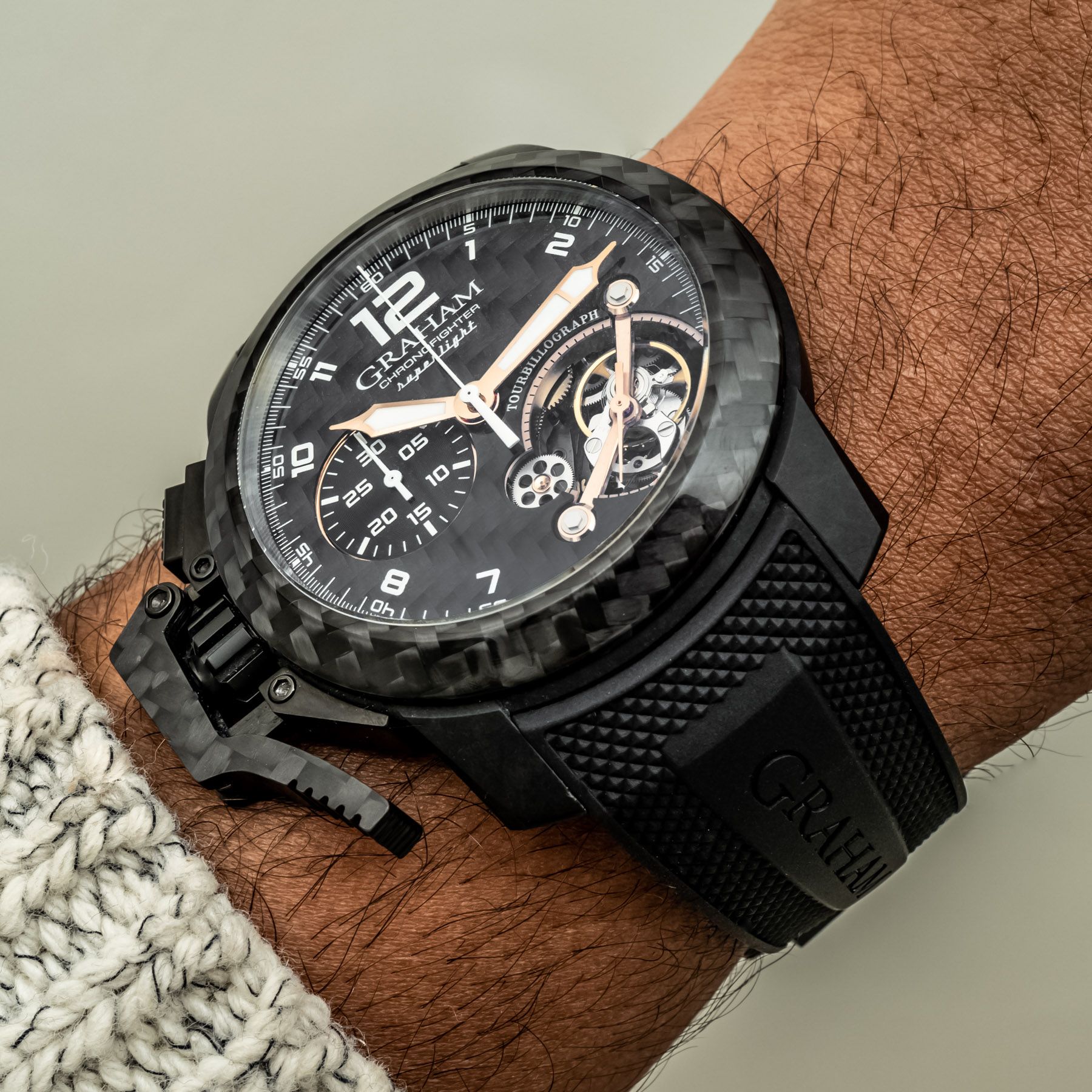 The chronograph is activated and paused via the trigger pusher, while the gripped pusher at 10 o’clock resets it. With the 30-minute chronograph counter sub-dial at 9 o’clock and that big tourbillon stretching between 3 and 6 o’clock, there really isn’t any room left on the dial for much else. I’m pretty agnostic about the matching black carbon dial that matches the case, and I do think a bit more could be done with the Graham logo and indices that are in a white varnish finish. It’s just a bit flat, for me. Still, the large lumed red gold hands match the red gold seconds hand that is set inside the tourbillon aperture very nicely and contrast with the black carbon in a way that’s refined but still appropriate for the military-watch vibe of the Graham Chronofighter.

Tourbillon chronographs are a particularly quirky niche group that tends to be very expensive, with offerings from Richard Mille, Bulgari, Audemars Piguet, Zenith, and even Bell & Ross all stretching well into the six-figures. The TAG Heuer Carrera Heuer-02T Tourbillon Chronograph is still probably the most affordable piece out there at just over $17,000. The Graham Chronofighter Superlight Carbon Skeleton Tourbillograph is limited to 100 pieces (available on either white or black rubber strap) and is priced at $29,950. It’s not cheap, but it has quite a bit going on for it, and there’s really not out there like it. You can learn more at graham1695.com.