2022 sees Grail Watch celebrating the 30th anniversary of the Franck Muller manufacture with the introduction of three chronographs: a bi-compax, a tri-compax, and a split-seconds chronograph. Featuring new-old-stock Lemania movements for the former two and Franck Muller’s signature double-sided rattrapante for the latter, all three watches pay tribute to Franck Muller’s incredible design creativity. Grail Watch was set up by Wei Koh — who founded Revolution watch media in 2005 — to create the most ambitious limited edition watches that have ever been made. Following the first chapter earlier in 2022 named “Dream Collaborations,” chapter two is about “Revival of Past Icons,” and no better watches to celebrate this chapter than the three amazing chronographs Grail Watch has created together with Franck Muller. 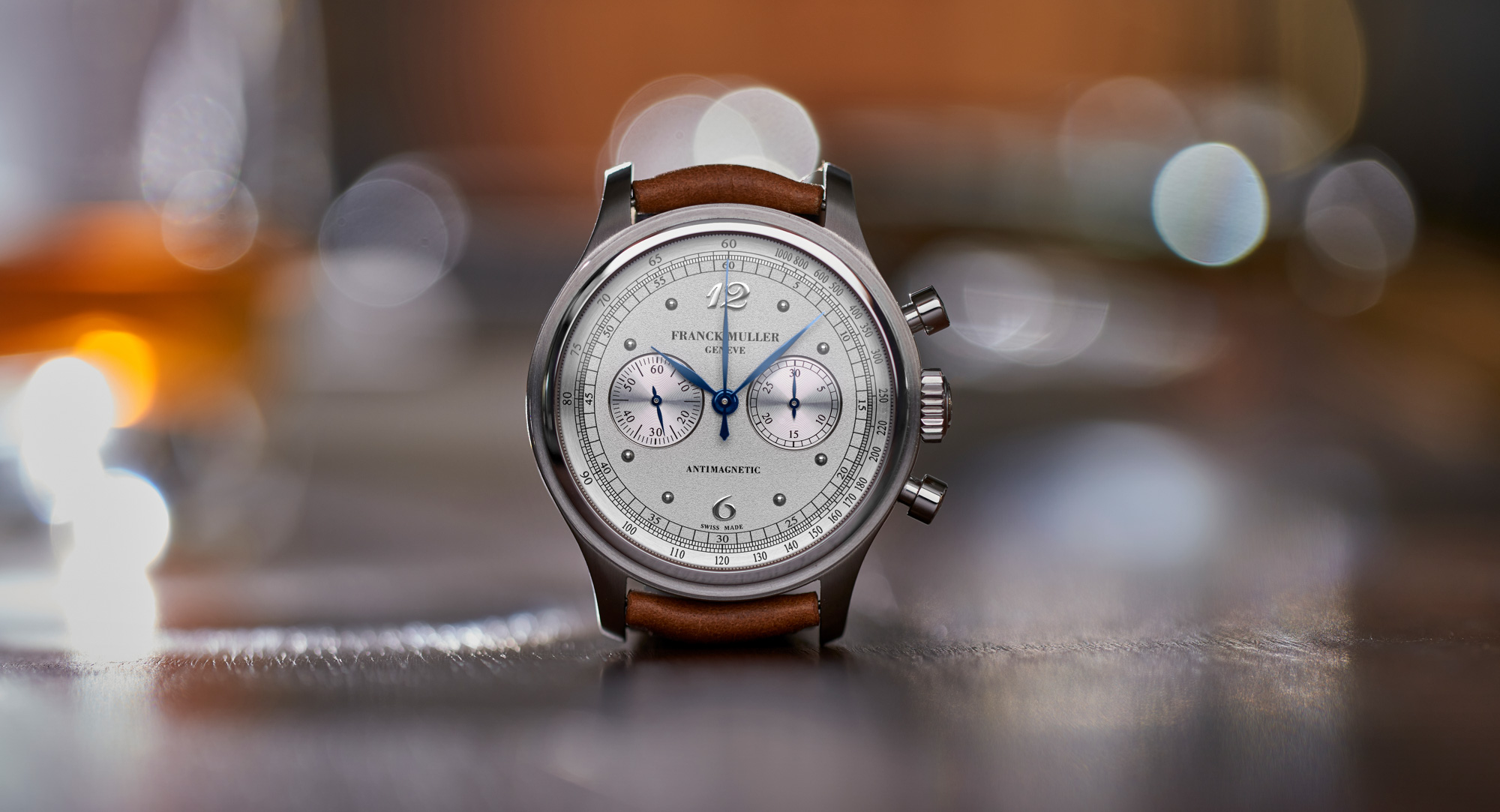 Muller entered watchmaking school at 15 years old, brilliantly modifying an existing Rolex Datejust into a perpetual calendar — which, after Rolex refused to take on, he produced a few more of — worked with Svend Andersen on restoring Patek Philippe vintage watches for private customers and the Patek Philippe Museum, eagerly mastering watchmaking expertise at every moment. In 1984, under the name “Franck Genève,” he began creating his own wristwatches, including the first-ever to feature the tourbillon on the dial side. During 1991, Franck Muller Genève was launched. From the Master Banker and Crazy Hours to the incredible Revolution 1 to 3 tourbillon-based pieces, Muller quickly became recognized as the master of complications. 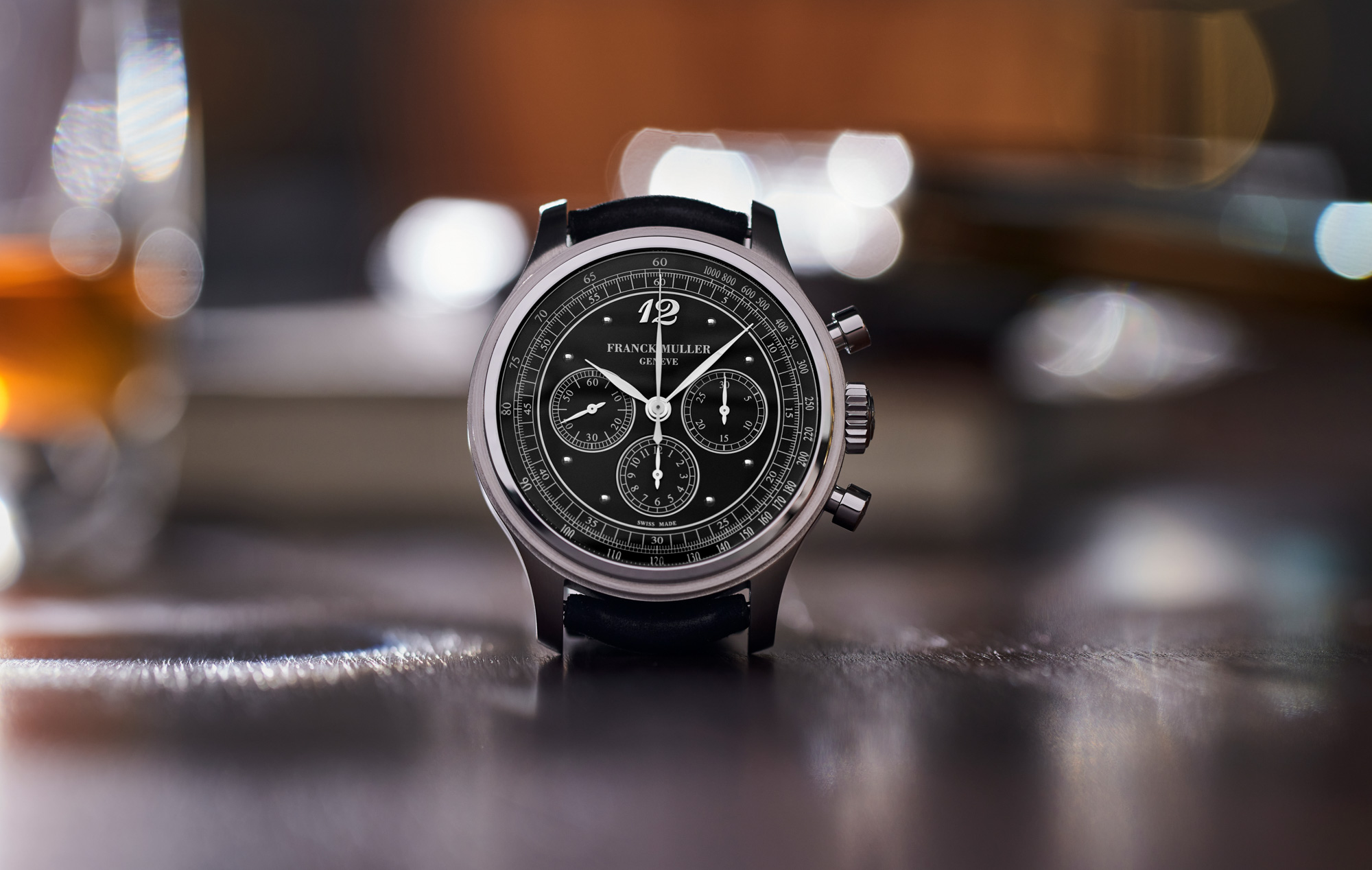 And of the various complications, Muller was truly passionate about the chronograph, and it was this dedication that led to the introduction of the bi-compax and tri-compax designs, both with a particularly charming fusion of vintage details and modern proportions, and, of course, the Double-Sided Chronograph. He explains, “I always loved chronographs and was fascinated that using this sweeping seconds hand, you could read so many different types of information. You could calculate your average speed over a kilometer or mile with a tachymeter. You could calculate a person’s heart rate within 15 beats using a pulsometer. And you could gauge the distance to a physical event (you start the chronograph, for example, when you see a lightning strike and stop it when you hear the sound) using a telemeter. But the problem for me was that I always wanted to have all this information on a single chronograph.” 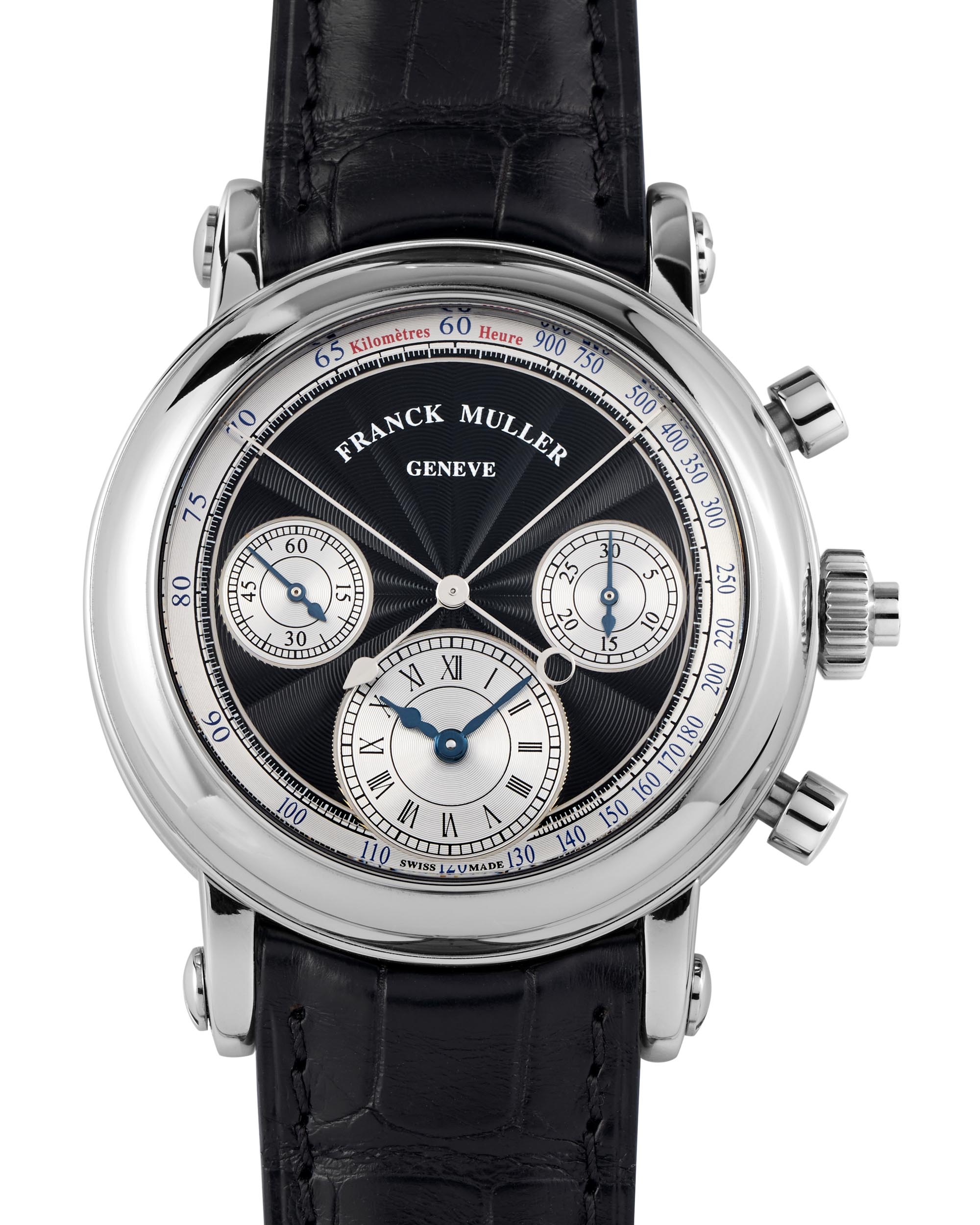 This led to the invention of the Double-Sided chronograph. Muller clarifies: “There are some watches that place multiple scales on the dial of the watch, but that ends up being very messy and hard to read. One day, I had the idea of creating a chronograph with two dials, one on the front and one on the back of a watch. Then, I would create a longer pinion connecting the chronograph hands on both dials. The advantage would be that you could use the second dial purely for the scales, combining a tachymeter, telemeter, and pulsometer so they were truly visible.” 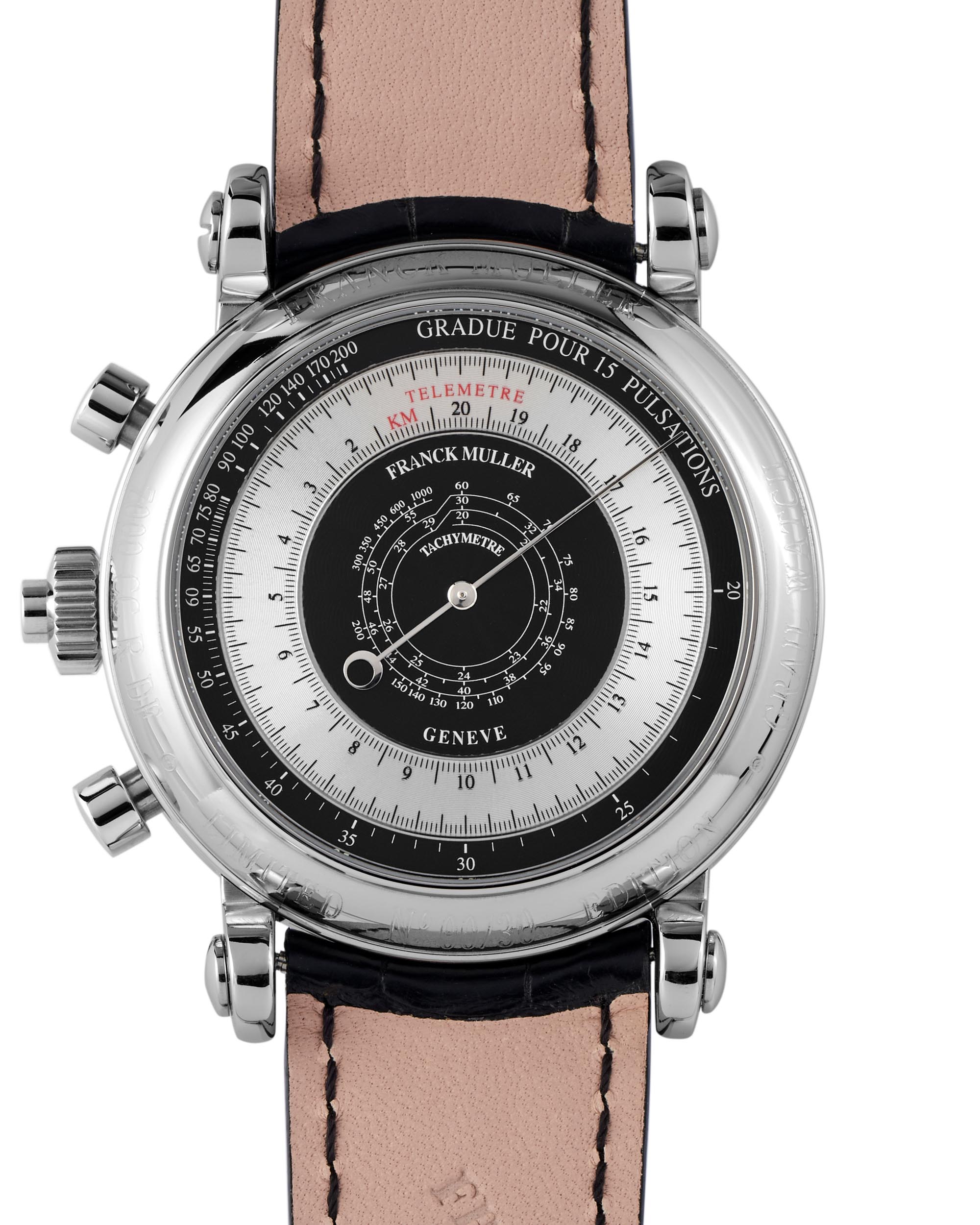 Produced in different versions, perhaps the most fascinating and complex Double-Sided Chronograph also contains a split-seconds complication. Jean-Loup Glénat, head of design at Franck Muller Watchland, explains: “The rarest, most original, and most visually stunning of the double-sided rattrapantes is one where time on the front dial is shifted to the subdial at six o’clock. For us, this has always been a particularly beautiful design, as it is a nod to the Master Banker, which featured two time displays like this at 12 and 6 o’clock. But the double-sided rattrapante chronograph frees up the dial so that it is the chronograph and split-seconds hands that basically occupy the maximum space, as they are the only hands mounted on the center cannon pinion.” 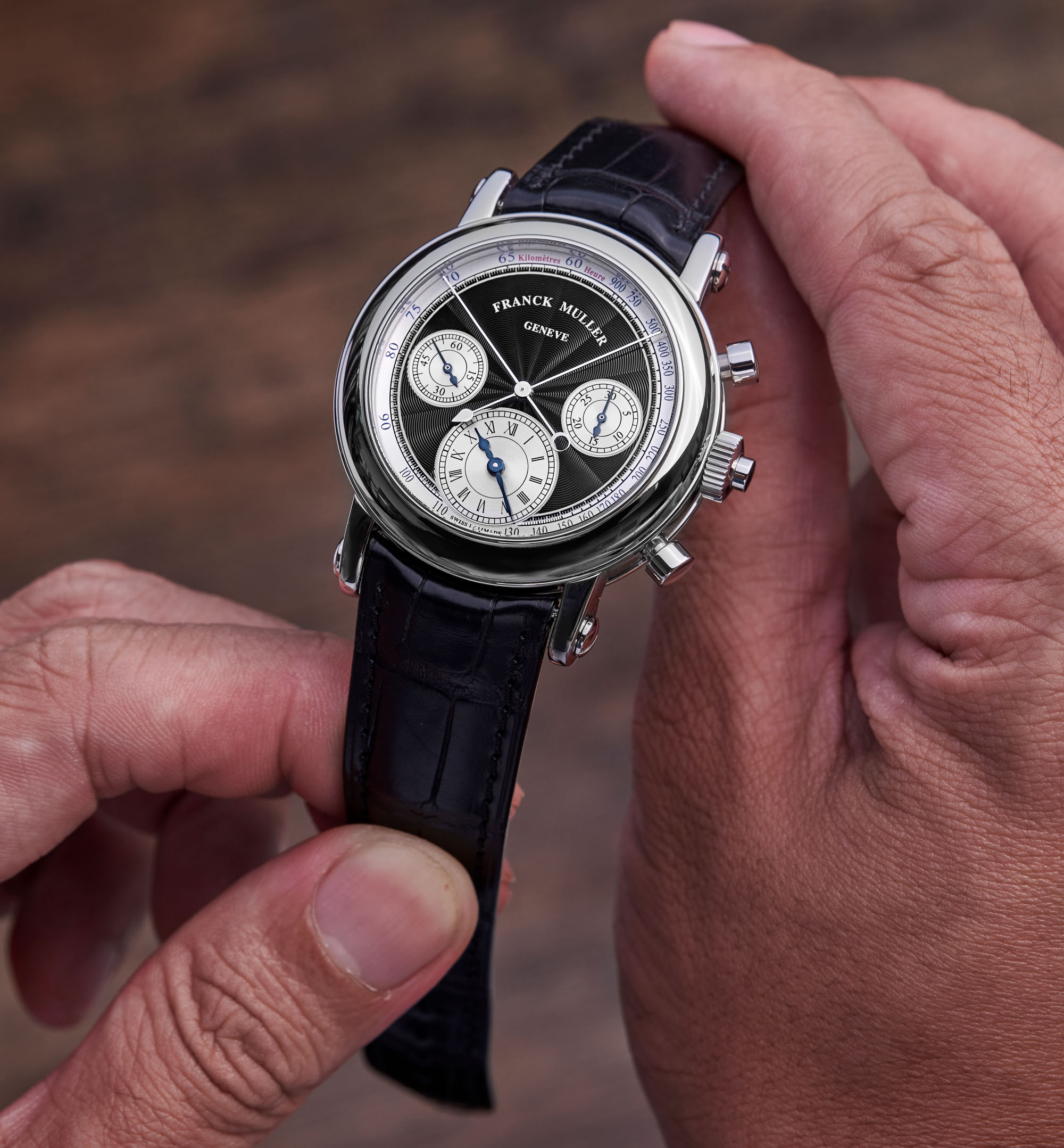 Proposed by Wei Koh, founder of Revolution and Grail Watch, the Double-Sided Chronograph has been resurrected after decades of dormancy in time for the brand’s 30th anniversary. It sports a 39mm-wide stainless steel case with straight lugs and a domed bezel, a gloss black dial with a concentric wave pattern, recessed subdials with a concentric circular pattern and polished rim, polished steel chronograph seconds and split-seconds hands, and pump pushers. The dial side features the tachymeter scale on a white ring, while the caseback displays the pulsometer and telemeter scales, with a co-axial double-sided chronograph seconds hand in polished steel that runs counter-clockwise. 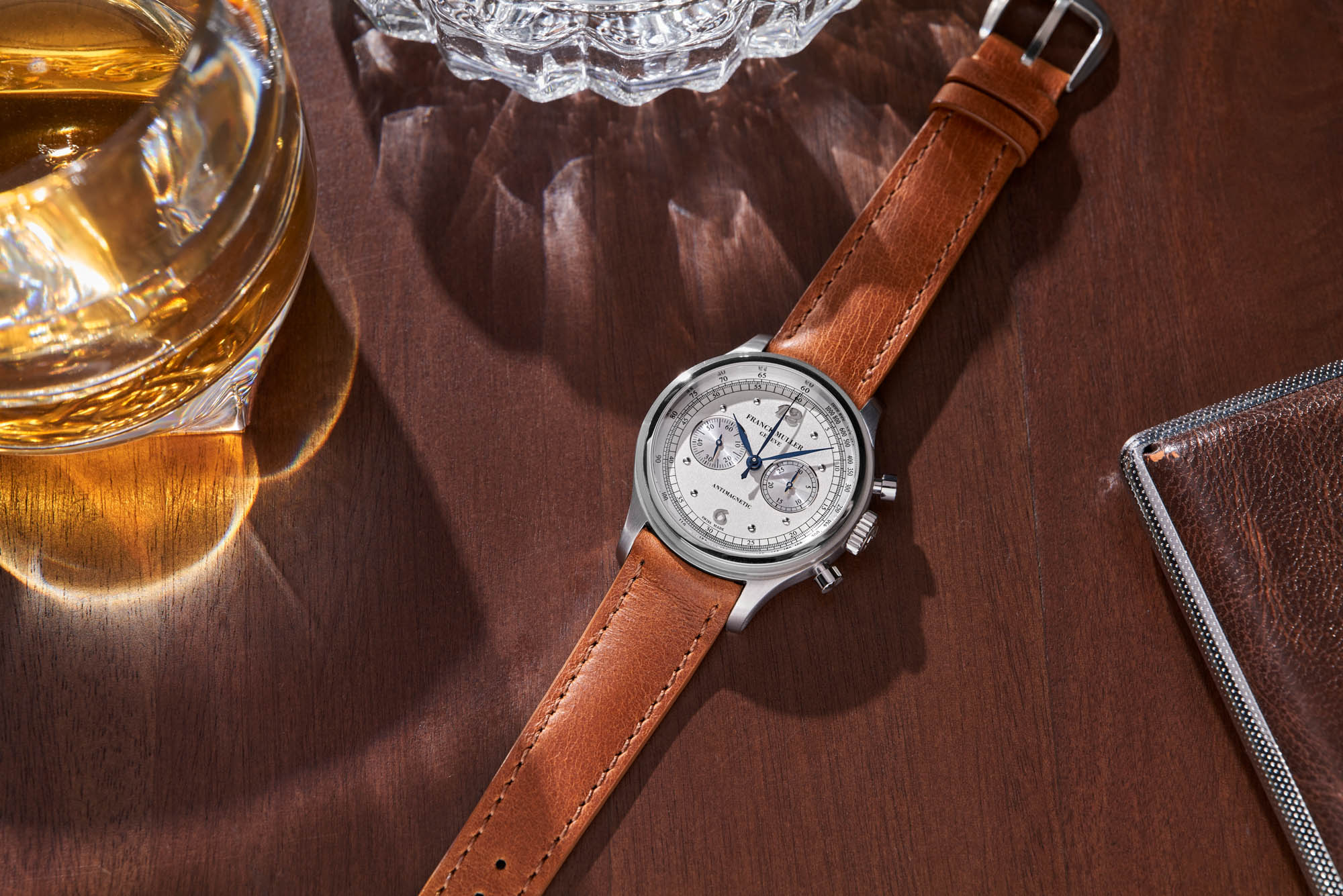 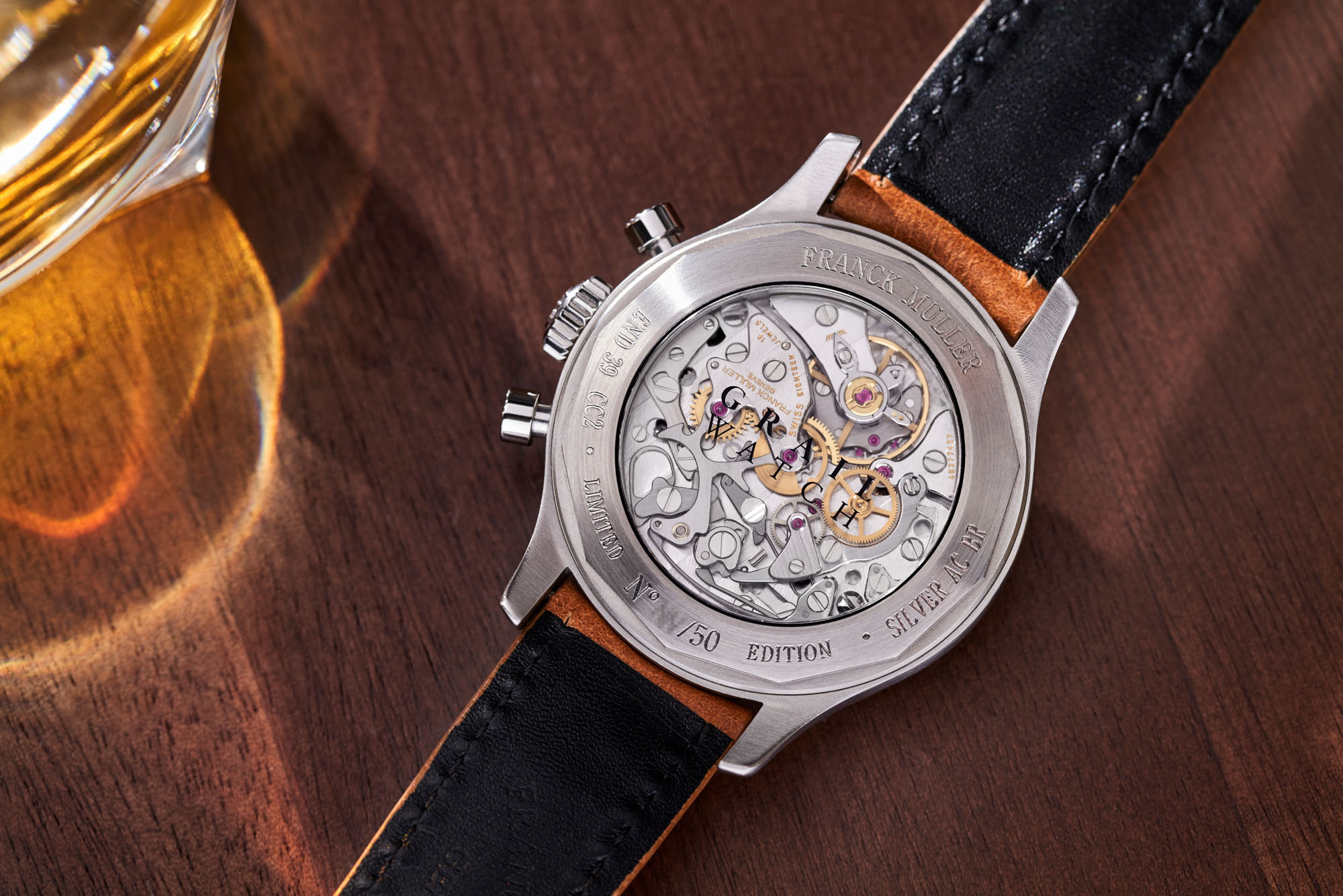 The two remaining pieces from this spectacular trio of Franck Muller’s 30th-anniversary watches pay homage to the brand’s Lemania-based chronographs from the 1990s. These pre-millennium pieces emerged as 36mm- and 37mm-wide, highly elegant chronographs with applied Breguet “12” and “6” numerals and applied dot hour markers. Says Nicholas Rudaz, CEO of Franck Muller Watchland: “These watches were all commissioned by an Italian retailer in the ’90s. They were made in small series of either 40 or 50 watches each time. In some versions, the number of the watch was actually printed on the dial.” Just like the Roger Dubuis Hommage, the design characteristics of these watches were a clear tribute to the legendary Patek chronograph references 130 and 1463 from the ’40s and ’50s. The cases were smooth and rounded with long lugs and concave bezels. Pushers were pump-style while the crowns were large and flat. Both the bi-compax and tri-compax watches featured the use of the Lemania 1874, a shuttle cam-operated chronograph movement with a horizontal clutch introduced to the Speedmaster back in 1968. Unlike the Roger Dubuis Hommage, Franck Muller’s pieces were crafted not with precious metal cases and see-through backs but in steel with solid casebacks, adding an “antimagnetic” label — rendering these less of a direct competitor to Patek Philippe, but rather a sportier attainable to be worn during auto racing, or similar activities. 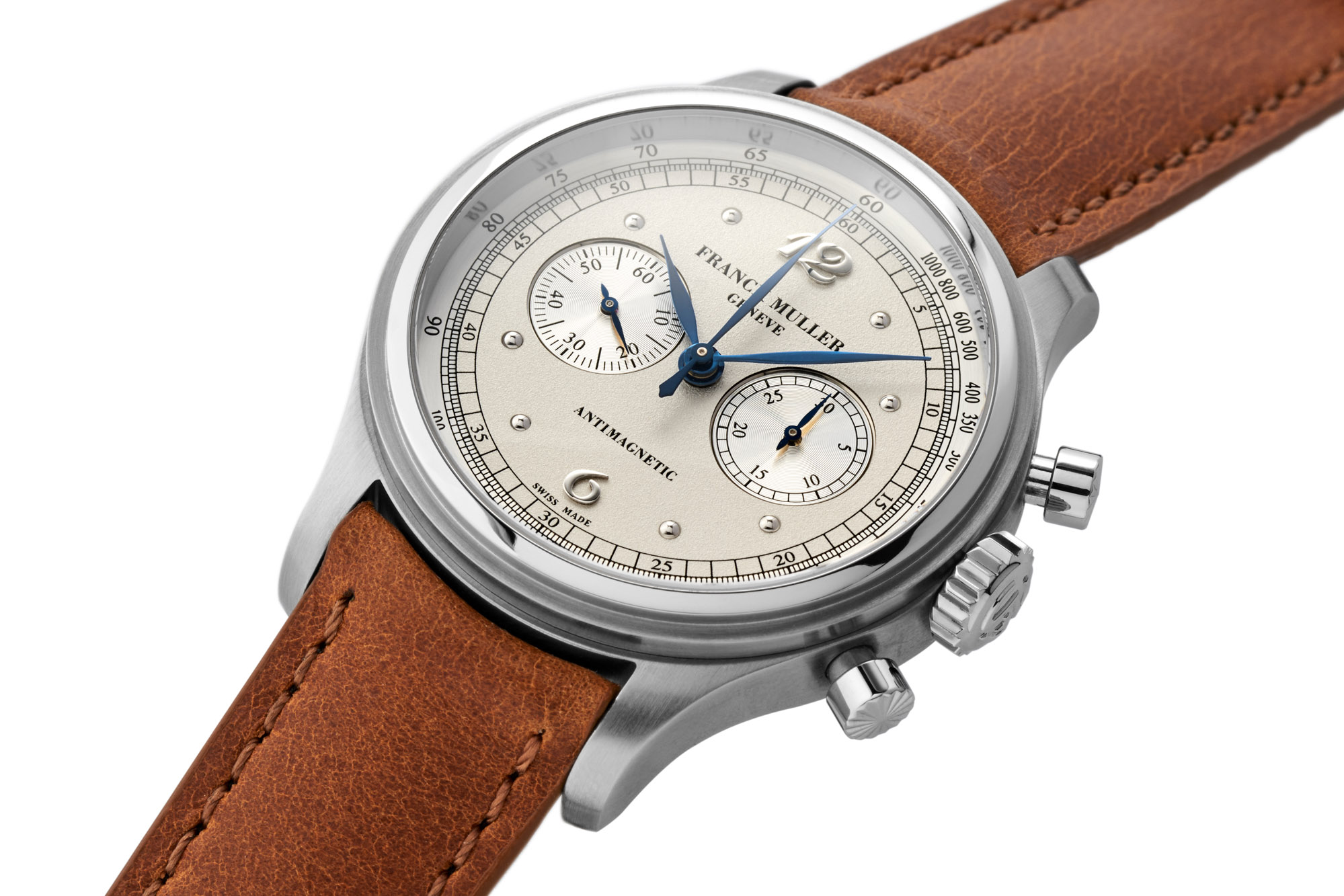 These sporting chronographs point back at what must have been an incredible time of creative richness for Muller — setting the ideal foundations for such an anniversary project. Glénat explains: “We were really excited to work on this project. It tells the story of an important part of our history and shows how creative Franck Muller was in the context of the era. Immediately, we retrieved the vintage plans of the watch and started to discuss the designs.” Among the very first decisions made was that the size was to be increased from 36-37mm to 39mm while staying faithful to the original finishing techniques and other iconic components, such as the oversized crown and the large, capped pushers — albeit this time with fluted pusher caps to differentiate them from those used in the ’90s. 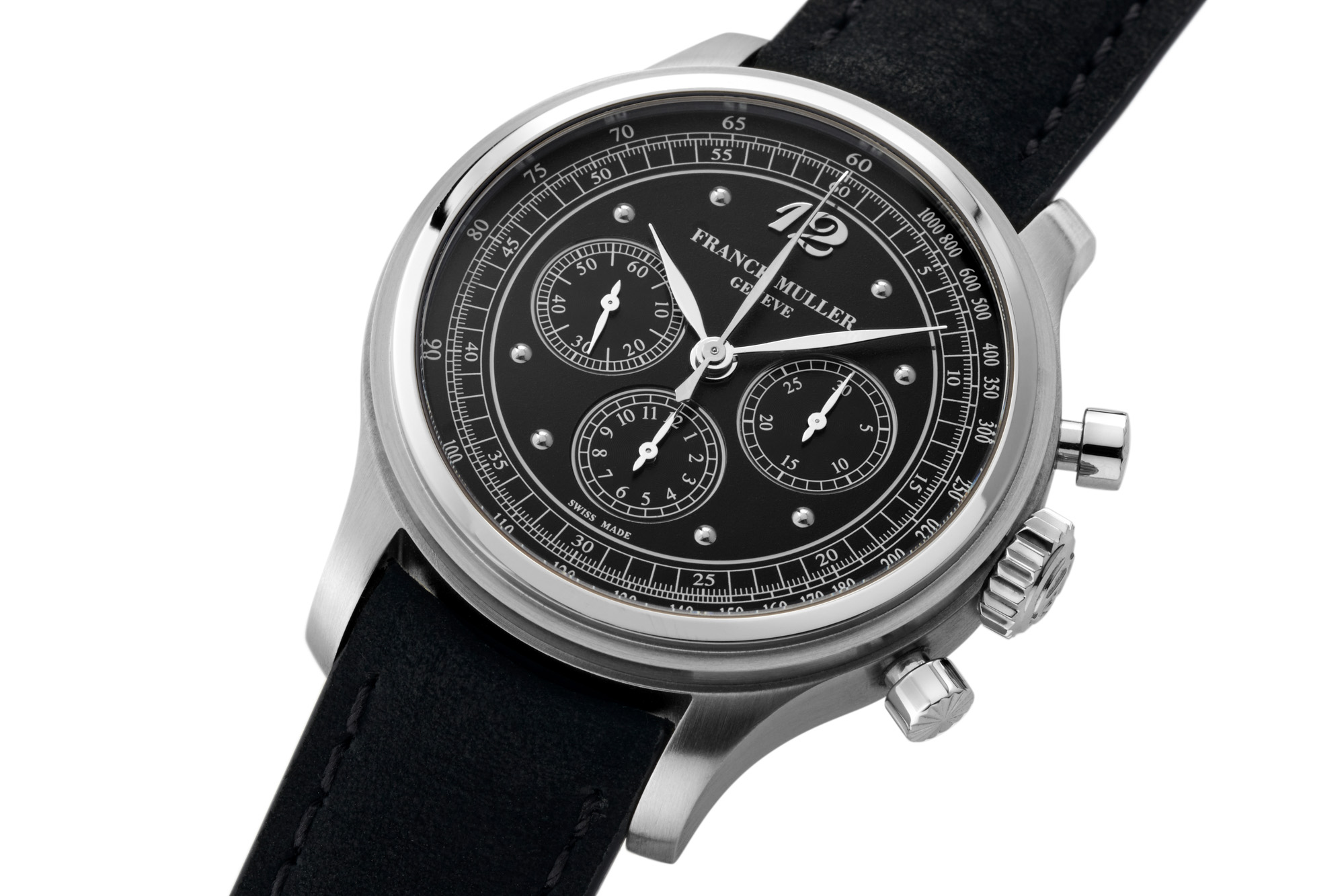 The second thing the Franck Muller team decided, together with Wei Koh, was that, while being incredibly faithful to the dial design of the original down to the texture, precise typography, and colors used, they wanted to inject a dose of “slightly more Latin sex appeal.” Says Glénat, “In order to do this, we played with enlarging the size of the applied Breguet numerals and applied indexes, subtly enhancing the sense of contrast from one section of the dial to the next. The idea was that someone would look at these watches and say, ‘Wow, the design is really dynamic-feeling,’ even while not realizing it’s because we made these small changes to the details. It would be hard to understand why you felt this way until you examined the modern watch next to an example from the ’90s.”

To attain a thin case profile — just 10.95mm-thick — and to stay true to the originals, a self-winding movement was quickly ruled out. In its place is a fortuitously discovered set of new-old-stock Lemania 1874, totally transformed by the brand to meet the Franck Muller standards, beautifully finished with Côtes de Genève and bearing the Franck Muller signature on their bridges. Rudaz says, “It’s very important for us that collectors understand that here at Franck Muller when we do something, we do it with real integrity and authenticity. If we are going to make these ‘Tribute’ watches, then let’s do a real tribute by making every one of these watches something truly special.” 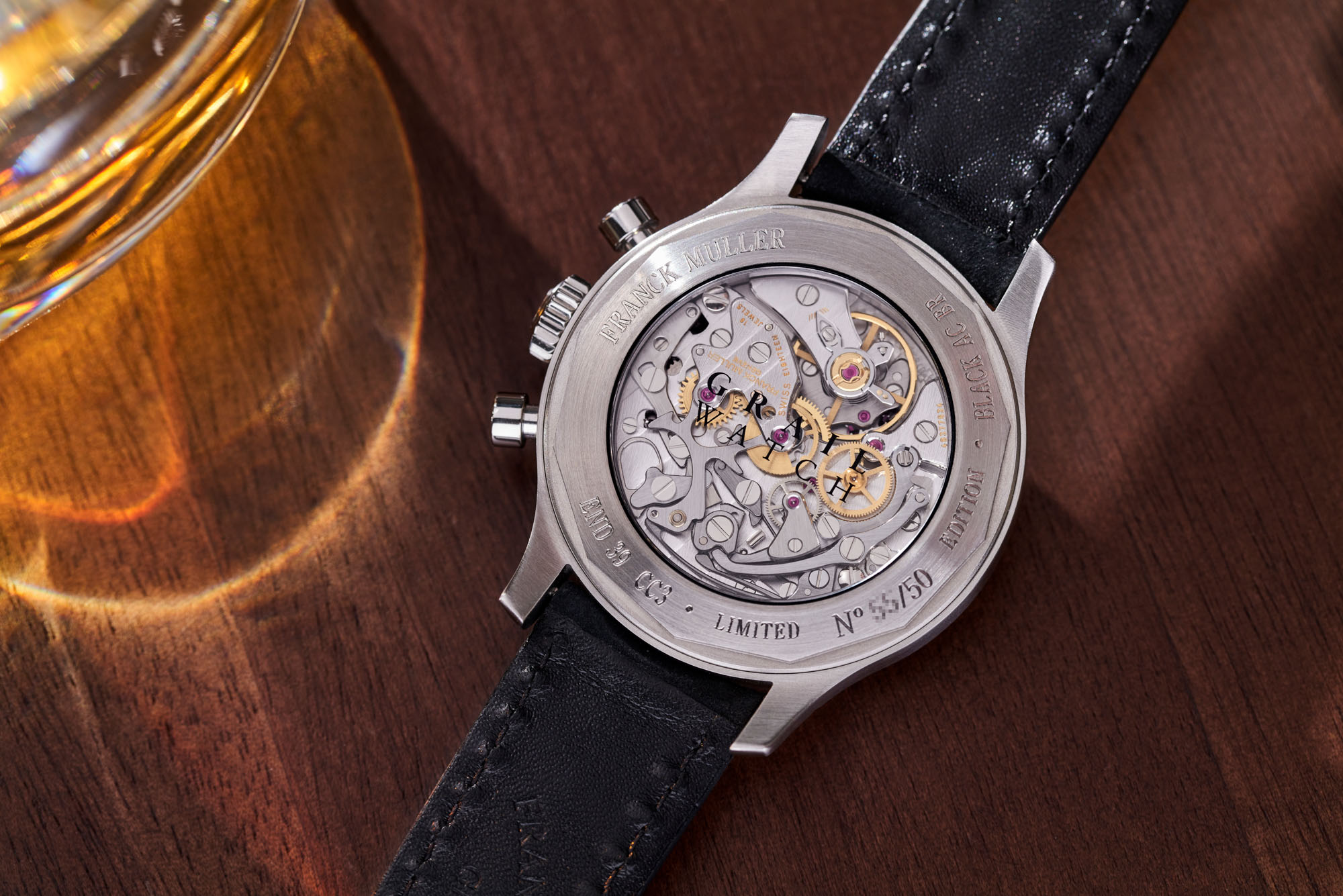 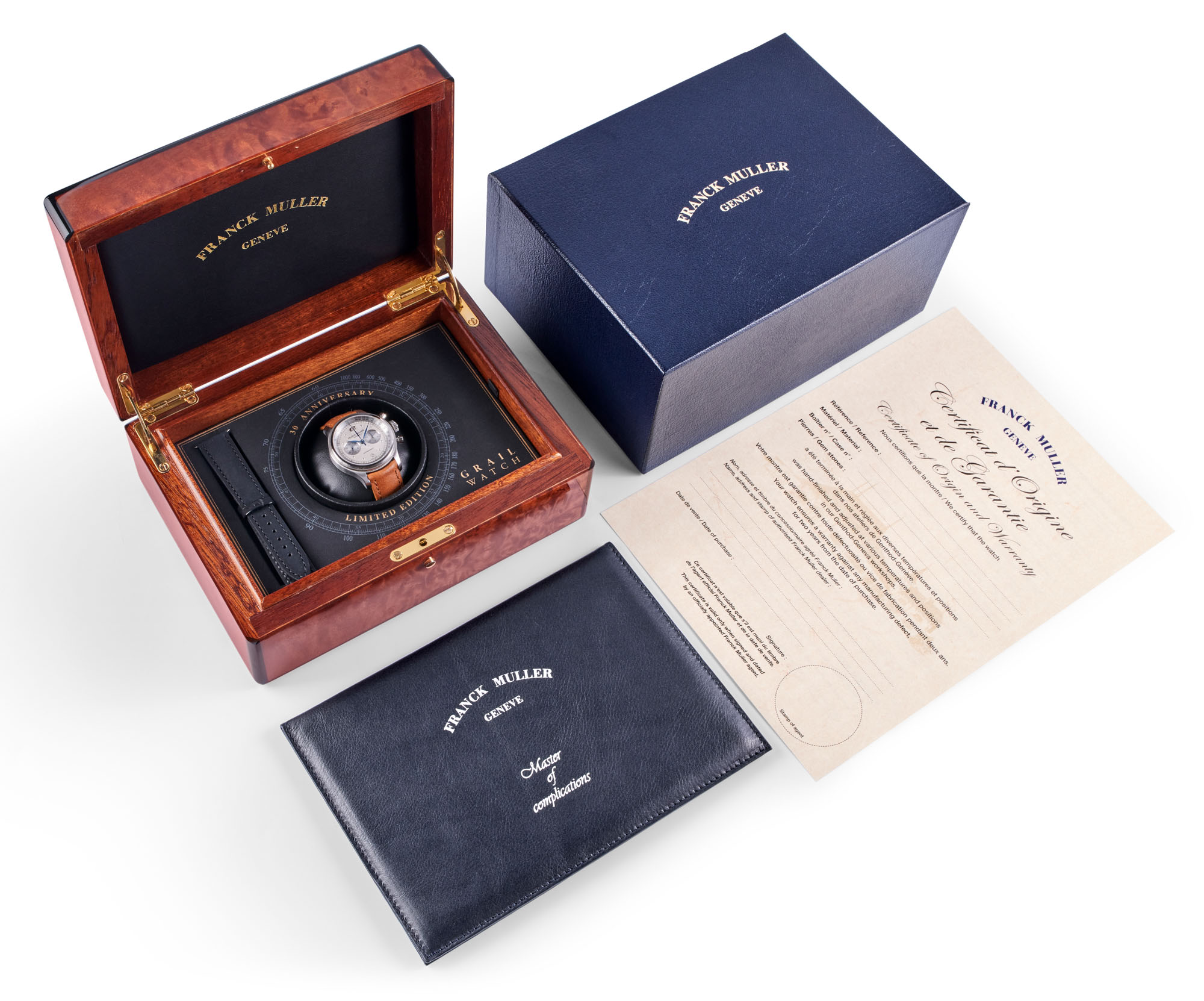 To please those with a desire to see these truly beautiful and, indeed, iconic chronograph calibers, a see-through caseback is fitted to the steel case. However, to maintain the antimagnetic property that was true to the originals, these anniversary chronographs also come with a solid and genuinely antimagnetic caseback that allows the owner to have their initials or a message engraved if they wish. Paired with simple calf straps that direct all attention to the stunning dial and case, everything is set for these truly iconic chronographs to return. 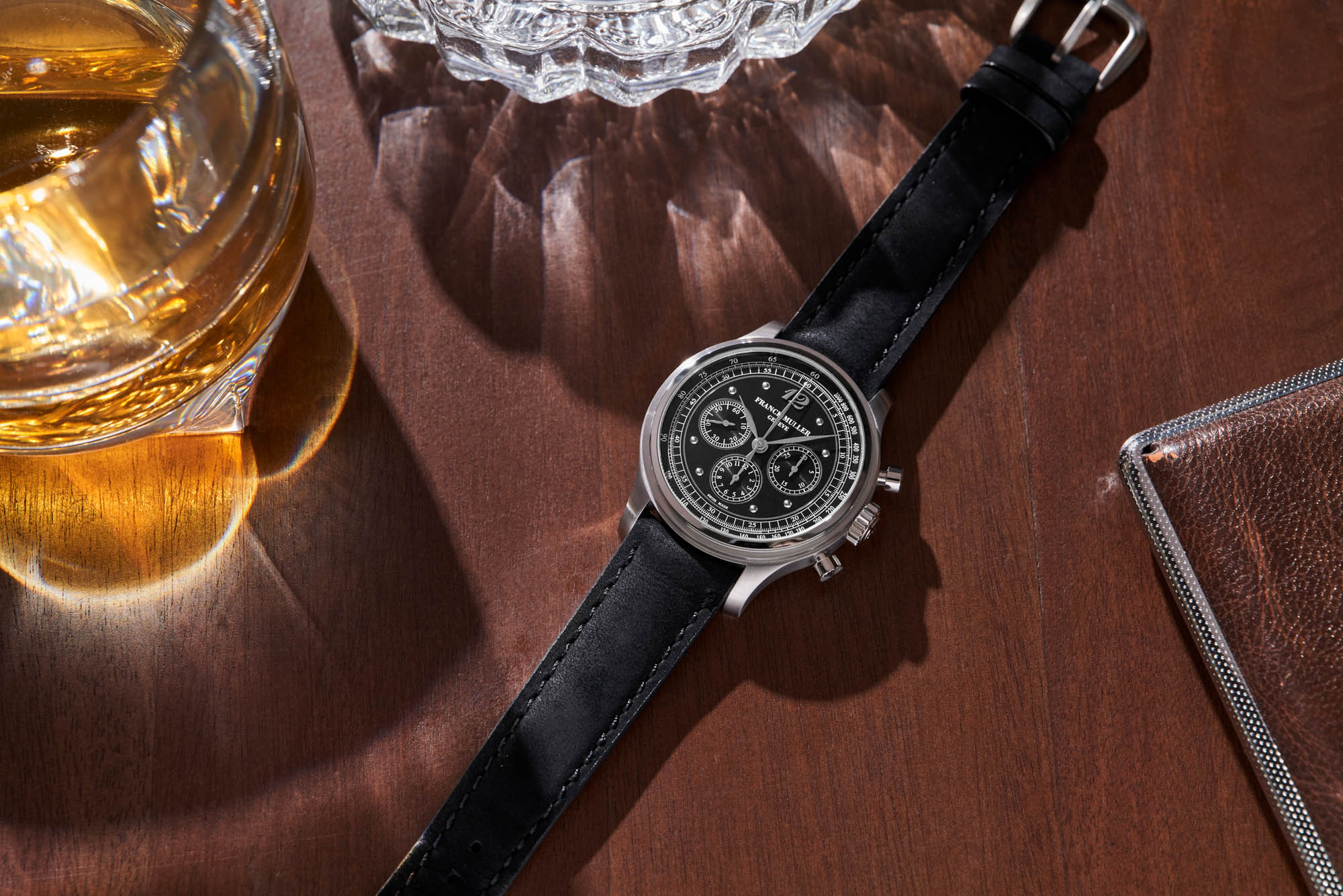