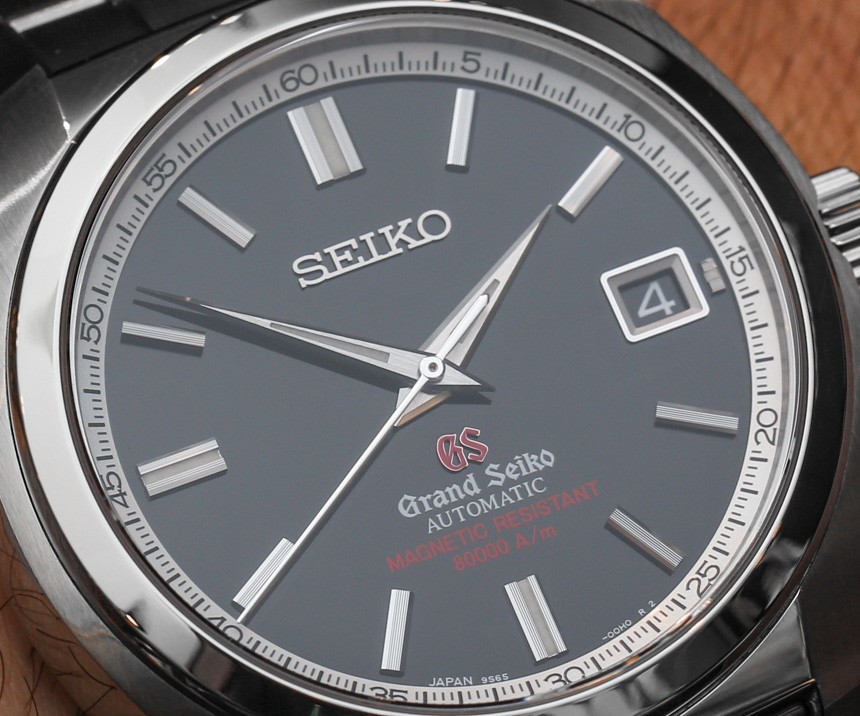 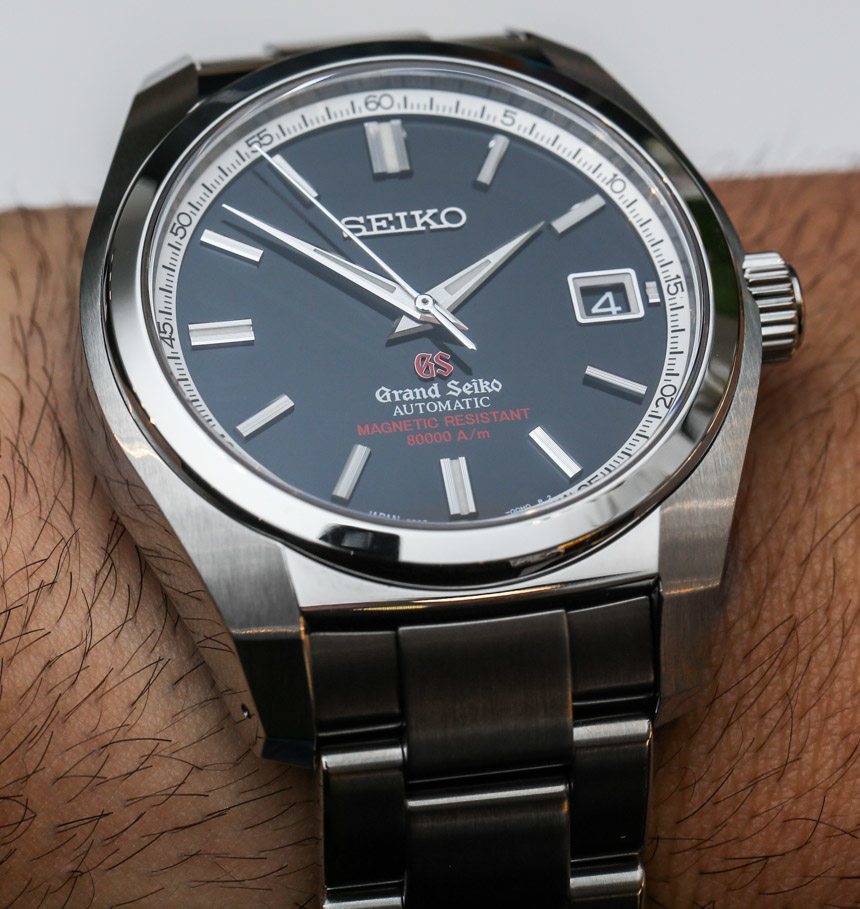 In this article, I am probably going to discuss a few topics only tangentially related to these rather wonderful automatic anti-magnetic ref. SBGR077 and SBGR079 Grand Seiko watches. Allow me to share with you the reason for this in advance – no one appreciates watches like this overnight. To fully understand the niche appeal of high-end Japanese sort-of-dress-watches with special anti-magnetic properties, you need to be in the watch game for a while. Even more niche are cousin watches to these pieces which are very similar in appearance but contain high-end Grand Seiko quartz movements. Those are the Grand Seiko SBGX089, SBGX091, and SBGX903, but more on that later.

While trying not to sound corny, I will say that wrist watch appreciation is a lot like an onion. There are most certainly many layers and folds which reveal themselves only with time, investigation, and experience. On a simple level, you can put a Grand Seiko on someone’s wrist, explain that it is a high-quality item, and remind them that other people will find them cool for wearing one. How, though, do you explain to someone the relative position of high-end Japanese watches in the larger luxury timepiece market, or why anti-magnetic timepieces are making a surprising comeback? I don’t really know the answer, but if you spend enough time checking out watches and experience what it is like to wear a lot of options, most people will tend to agree that watches of this ilk are pretty damn cool. 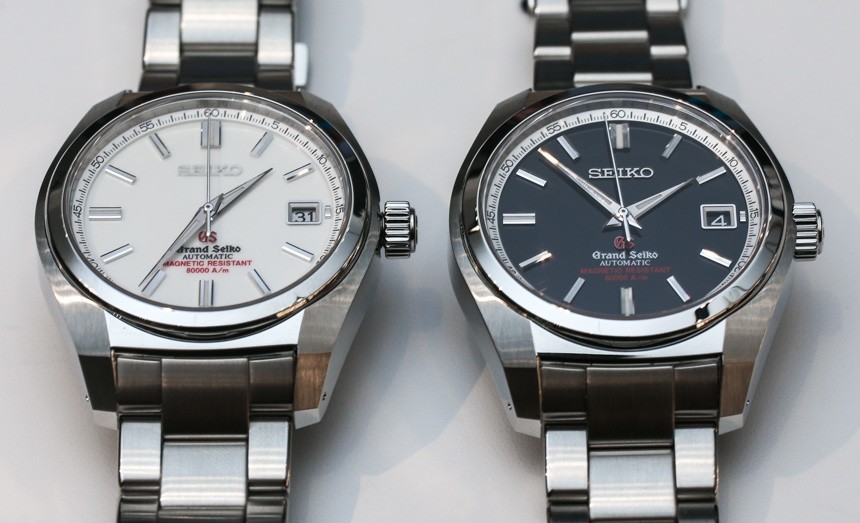 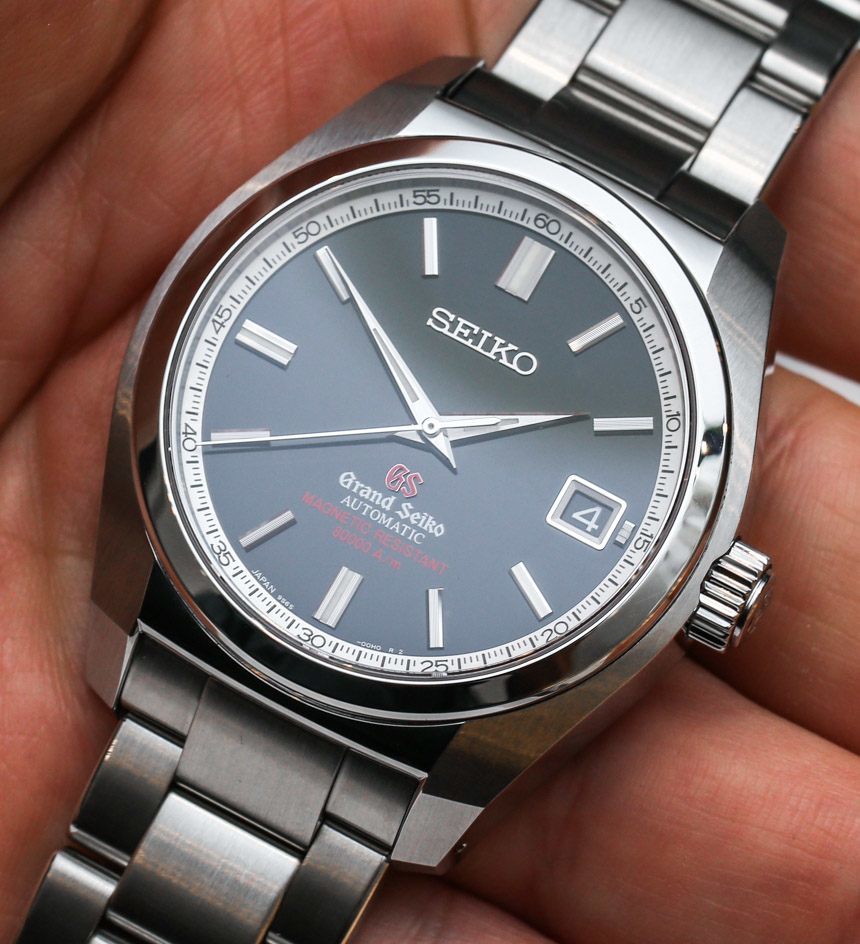 Anti-magnetic watches (labeled as “Magnetic Resistant” on these Grand Seiko timepieces) are returning as a rather desirable item, after not being very much a part of “the watch conversation” for quite some time. While Rolex has enjoyed oodles of cult success with the Return of the Milgauss about 8 years ago in 2007, it was arguably Omega that helped spawn serious modern interest in timepieces that resist the effects of magnetism with the Omega Aqua Terra >15,000 Gauss (reviewed here) in 2013. The 15,000 Gauss (as it is often colloquially known) employed a new, much more modern way of fighting magnetism compared to prior techniques; which involve shielding the movement inside the watch case with iron to ward off magnetic fields. The technology in the Omega 15,000 Gauss was later coined “Master Co-Axial,” and involves the very simple (yet technically challenging) use of non-magnetic parts in the movement. Omega will eventually make the majority of its in-house made movements “Master Co-Axial,” which is another big step in telling watch consumers that magnetism is something to worry about.

So should you worry about magnetism as a watch wearer? Yes and no. You have to realize that, to a large degree, the concern isn’t that you are suddenly going to find yourself around serious industrial magnets or in an MRI machine. The worry is how relatively small magnetic fields often caused by modern technology can either temporarily effect or permanently damage the movement inside of your watches. Standard equipment for all mechanical watch repair facilities is a de-magnetizer machine. Originally, anti-magnetic watches were developed for various types of professionals, such as scientists who worked around strong magnetic fields. Ironically, as we use more and more technology in our life, the “threat” of magnetism to watches is amplified. So do you need an anti-magnetic watch? Maybe. Do you want one? Probably. 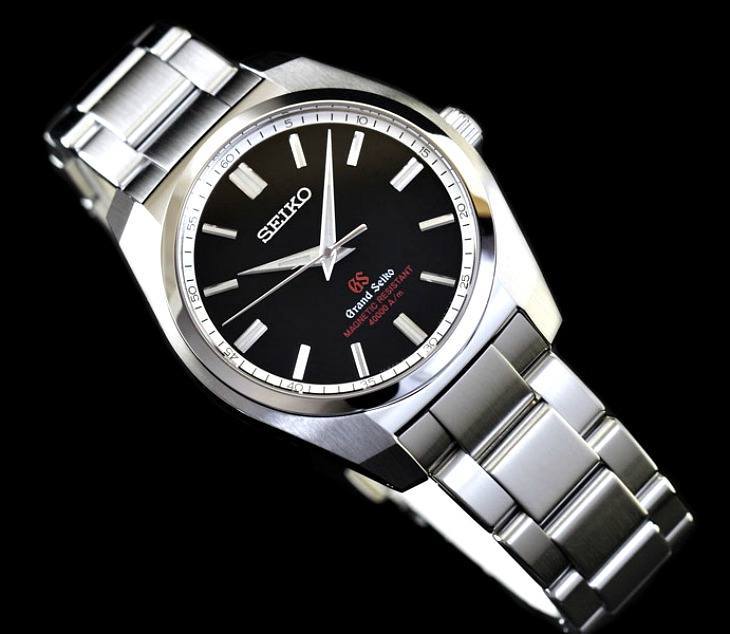 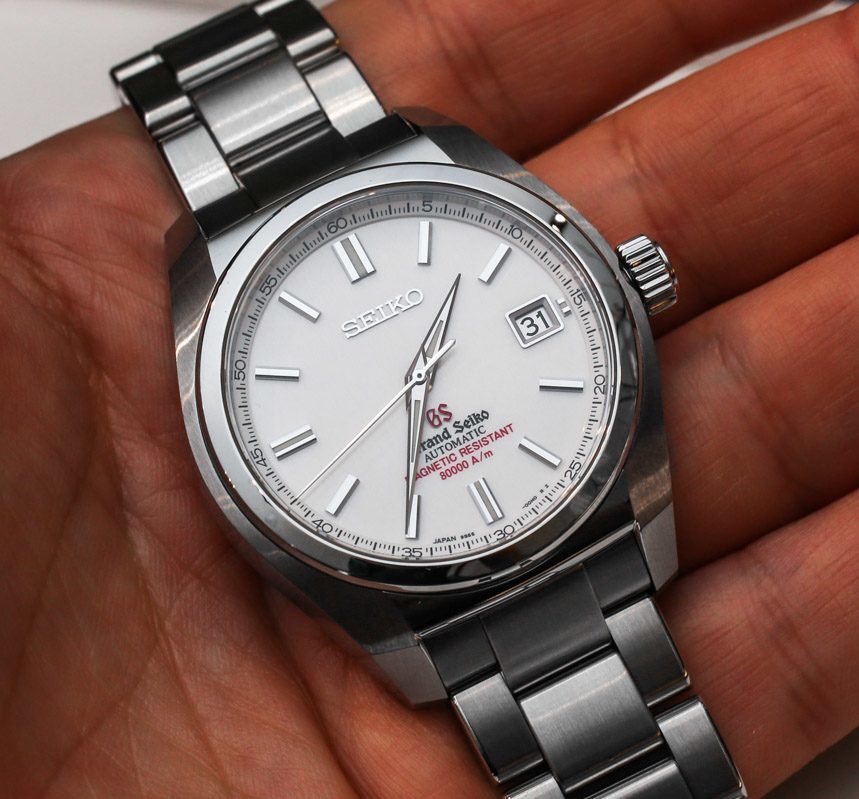 Grand Seiko came out with this assortment of Magnetic Resistant watches around 2012. This includes two mechanical versions as well as three quartz versions, with the latter including a 500-piece limited edition, known as the Grand Seiko SBGX089. The collection also included the very visually similar Grand Seiko SBGR077 (off-white dial) and SBGR079 automatic models. Given that the watches are so visually similar, the automatic models have a date window, while the quartz models have no date window on the dial (which I personally prefer a little bit, given how it provides excellent dial symmetry). While these timepieces very much fit the conservative, dressy mold of most Grand Seiko watches, what appeals to me about the Magnetic Resistant collection is some of the sportier touches.

This includes mostly brushed finishing to the cases and bracelet, as well as the hints of red color on the dial. You’ll also notice that compared to many other Grand Seiko cases, the Grand Seiko SBGR and SBGX range has rather wide lugs and are a bit more thick overall due to the inclusion of the iron core. This helps them wear larger, despite the rather medium dimension of the case size which is just under 39mm (38.8mm wide to be exact). The lugs also happen to have an interesting and modern angular design to them. One area where the mechanical and high-end quartz versions of these watches differ is case thickness – by almost 5mm. Equipped with what is perhaps the most impressive high-end analog quartz movement around, the caliber 9F61-based SBGX family of watches are just 10.7mm thick, while the mechanical automatic Grand Seiko SBGR models contain an in-house made caliber 9S65 and have cases which are 15.3mm thick. That is a serious enough difference that they wear larger. Ideally for me, I would have a 40-41mm wide SBGX with the quartz movement and the slimmer profile. Both are good options though. 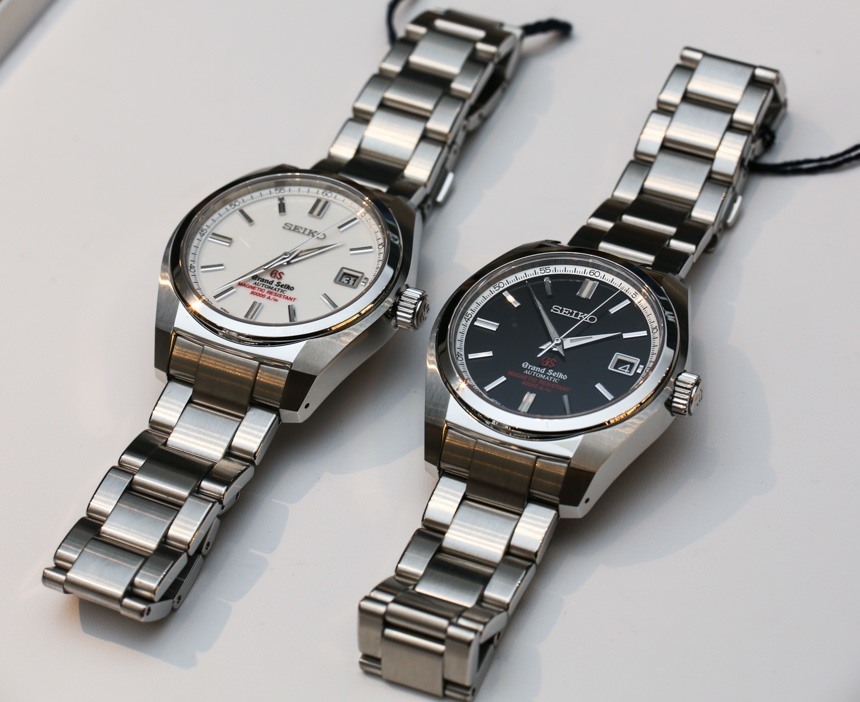 Grand Seiko watches are available with either quartz, mechanical, or Seiko Spring Drive movements. While all are good choices, I have to admit that I am more drawn to their quartz and Spring Drive offerings. It isn’t that Seiko doesn’t make excellent mechanical movements – they do. It is rather that no one else offers anything like their high-end quartz or Spring Drive movements. Their 9F series of quartz movements found in the Grand Seiko SBGX range are accurate to within about 10 seconds a year, have self-adjusting super precise hands, can handle heavier hands compared to standard quartz movements, and are just a beauty to see operate, as that seconds hand ticks with amazing stability. You’ll never be able to go back to cheaper quartz again after seeing a Seiko 9F family movement. Having said that… if you are like most mainstream watch people you’ll just want the traditional charm of an automatic – and for that there is the very capable 9S family found in these Grand Seiko SBGR models.

Should I start talking about Grand Seiko dials? Maybe not, as it is a long discussion. Some call them boring, but no one denies the pursuit of perfection Seiko puts into the hands, hour markers, and overall finishing. Diamond-polishing is used to give those hands and applied hour markers their razor-like edges and flat surfaces, whether they are polished or brushed. While the off-white dial of the Grand Seiko SBGR077 is remarkably legible for a light-colored dial, I think the most beautiful is the black-dialed Grand Seiko SBGR079 with its silver chapter ring and great legibility. The same things I like about the Grand Seiko SBGR more-or-less also apply to the SBGX models. So if you’ve looked at Grand Seiko’s more conservative fare in the past, and found it just too… conservative, then these models with their modern, slightly sporty twist might be right for you. 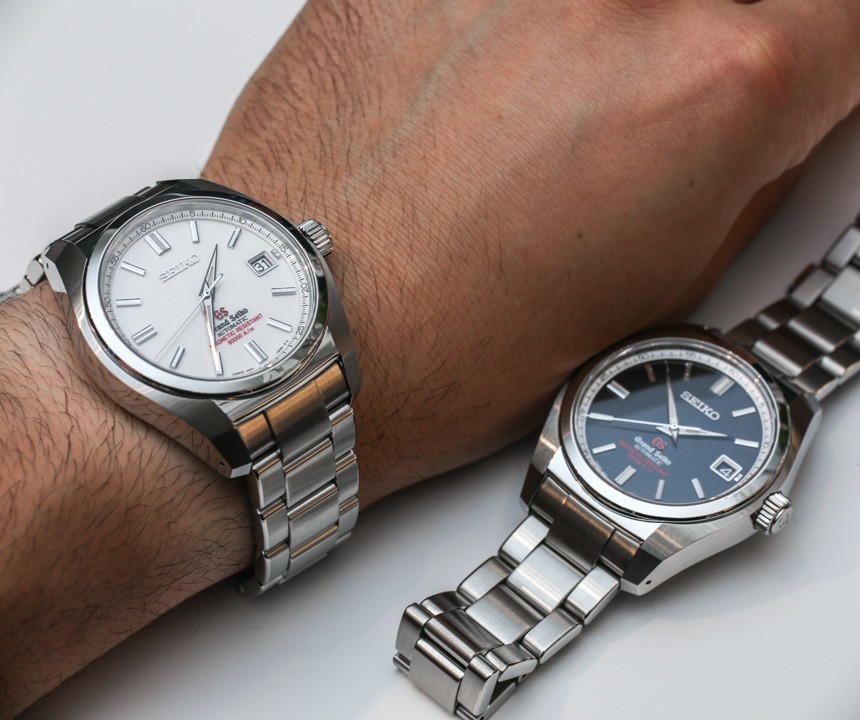 Limited Edition Grand Seiko models aren’t unheard of, but they are rare. I mention this as a prelude to suggesting that all of these models are going to be hard to find in a retail environment, even though the only limited edition one is the below pictured quartz-based Grand Seiko SBGX089. Limited to 500 pieces when it was released in 2012 as part of the launch of the new “Magnetic Resistance” collection, it has just a slightly modified dial that is all black with a yellow seconds hand. When people saw this watch, Seiko wanted them to understand that the new collection was Grand Seiko’s answer to the Rolex Milgauss.

The funny thing is that I am not even sure Seiko needed an answer to the Milgauss, but of course, their goal is to try and beat Rolex at their game. Seiko does a great job of beating a lot of the European brands on paper at their own game. Only, you need to understand that Swiss watch companies still set the rules, and it is their game. Seiko follows, improves, and adapts… but I still feel like it all comes from influences derived from Europe. 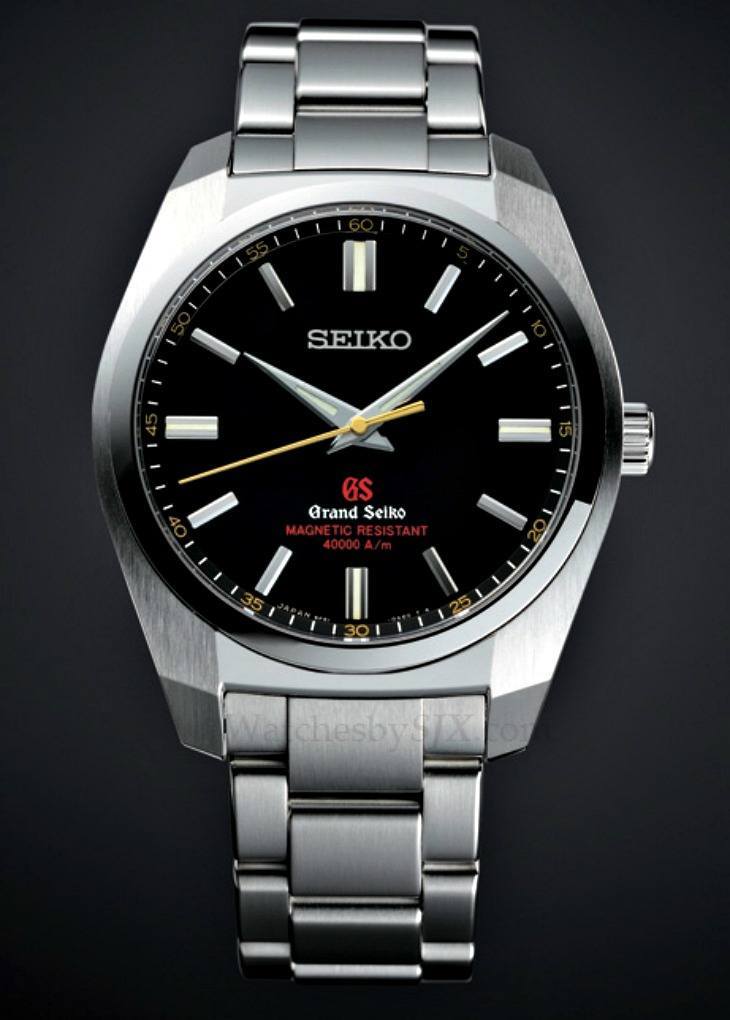 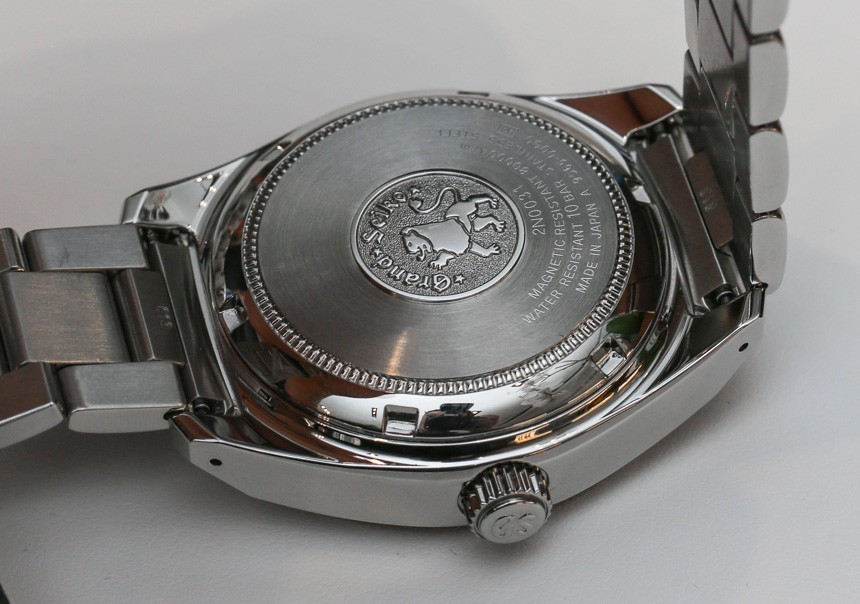 While it will not affect most people’s lives, it is important to know that the automatic version of this watch has a different magnetic resistance than the quartz version. Also, the automatic Grand Seiko SBGR077 and SBGR079 watches have the same amount of magnetic resistance as the Rolex Milguass – at least, that is my understanding. The two watches just use different measurements. On the dial of the Grand Seiko SBGR watches you see that the movement is shielded to 80,000 A/m (ampere per meter) which is roughly equivalent to 1000 Gauss. Look up the Rolex Milgauss and you’ll see that like its name implies (mil = 1000), it is resistant to 1000 Gauss. Of course, the two are bested by Omega’s Master Co-Axial – but that uses different technology.

The quartz-based Grand Seiko SBGX models are resistant to 40,000 A/m, which I am assuming is 500 Gauss. I am not sure why the two models have different ratings, but I am guessing it has something to do with the movements and perhaps the thickness of the cases. I am pretty sure that both are equally suited to resist the effect of magnetic fields most people may encounter on a regular or even occasional basis. 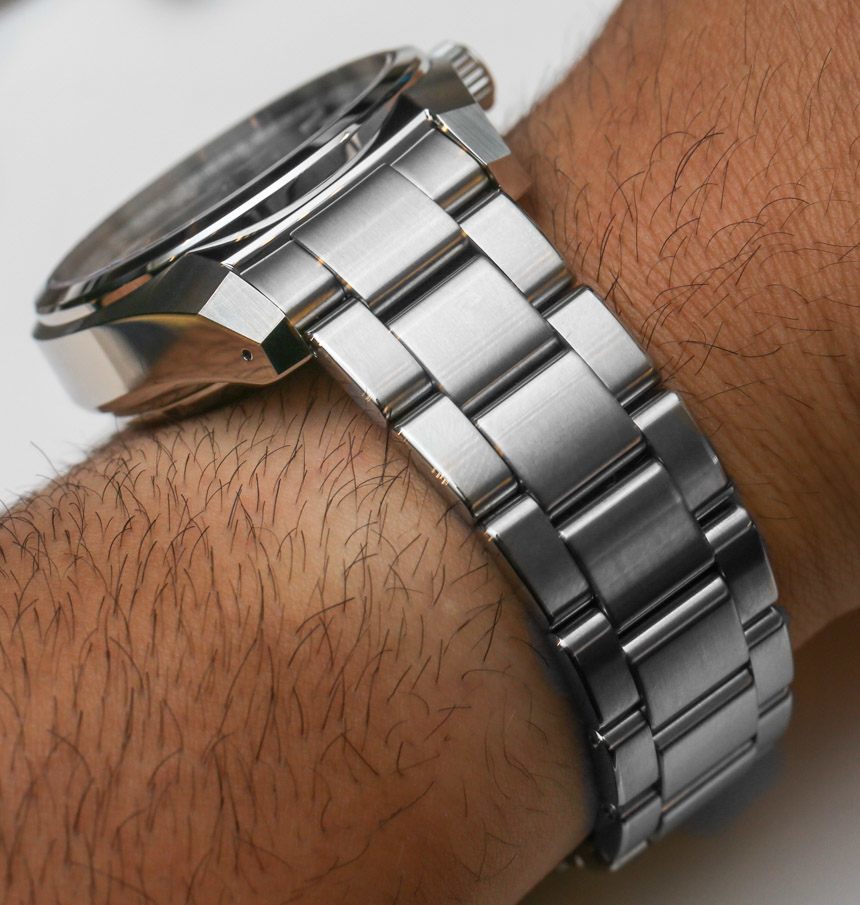 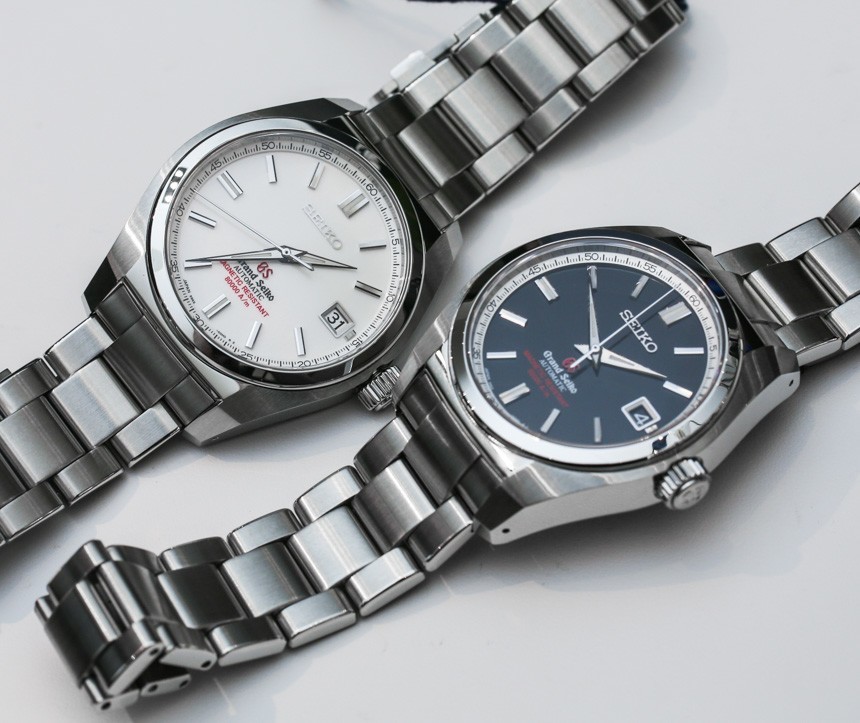 Delve deep enough into the world of horology, and eventually you’ll discover why magnetism is a problem, why anti-magnetic watches are cool, what makes a high-end quartz movement different from cheap ones, why Grand Seiko movements overall are really cool, why the Rolex Milgauss is a cool niche watch, and a lot more things necessary to know as a precursor to truly understanding, and ultimately appreciating the Grand Seiko SBGX and SBGR watches. On the wrist, they offer a conservative look that many people welcome, but with just enough novelty to be different.