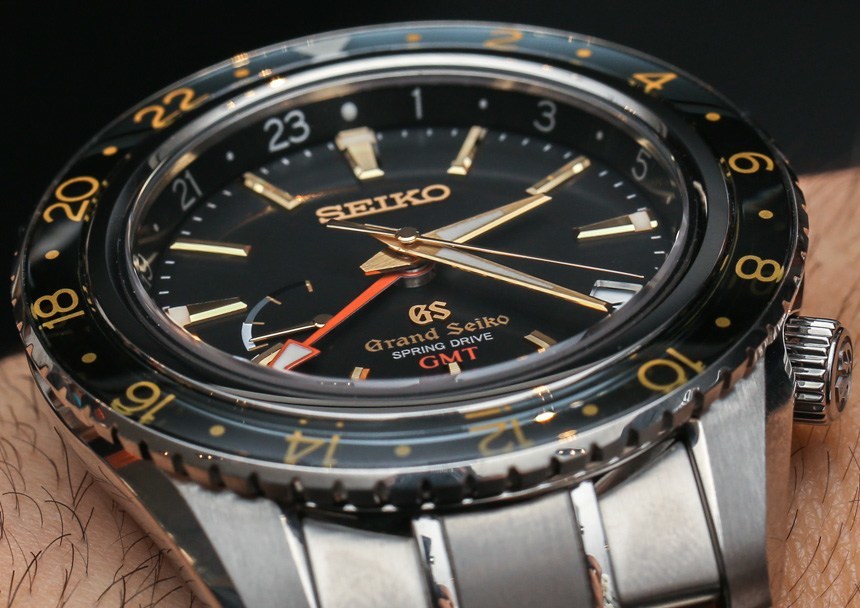 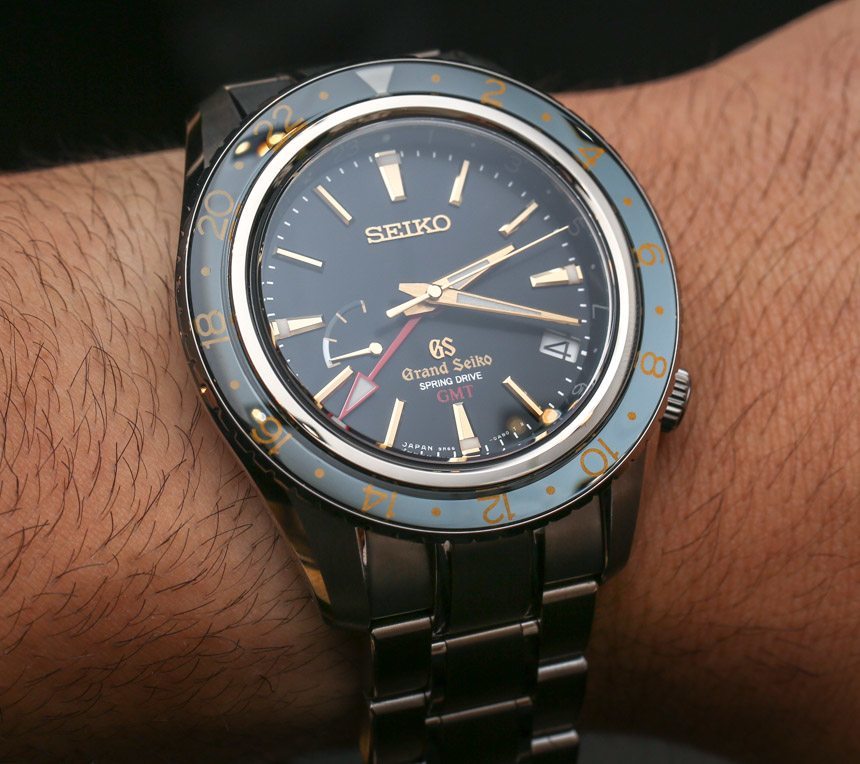 There are watches that I like, watches that I love, and then watches that I feel both those ways about and also eventually want to buy. The Grand Seiko Spring Drive GMT ref. SBGE015 is one of the latter. People that know my watch tastes are familiar with the fact that I not only have a soft spot for Japanese timepieces, but I am also keenly interested in all manner of high-end horology from the major Japanese brands, regardless of whether those pieces contain mechanical or quartz movements, or something in the middle. 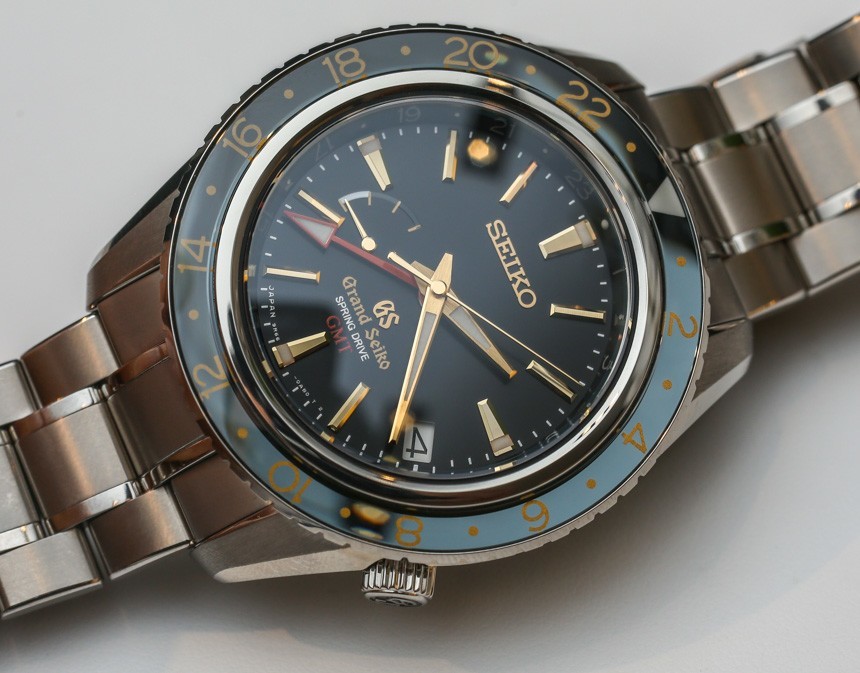 What is in the middle? Well Seiko’s famed Spring Drive movement family for one – which is the precise type of movement contained in this Grand Seiko Spring Drive GMT watch. Inside this piece is the Seiko in-house made caliber 9R66 automatic Spring Drive movement that is powered by a spring but has a quartz regulator. I’ve spoken about Spring Drive in the past, and a new dedicated discussion isn’t necessary. We’ve posted articles on it before, and Seiko also has a lot of good materials, if you aren’t yet familiar with the concept. I like to think of it as the best of both worlds, when wanting the fascination and soul of a mechanical movement with the accuracy of a quartz movement.

In terms of accuracy, Seiko promises at least plus or minus one second per day, but I’ve known Spring Drive owners who claim it is better. Seiko actually has a funny habit of publishing accuracy ratings that are WORSE rather than “idealized” compared to actual performance. I believe the power reserve for the movement is about three days, and like all Spring Drive-based movements, there is a handy yet diminutive power reserve indicator on the dial. 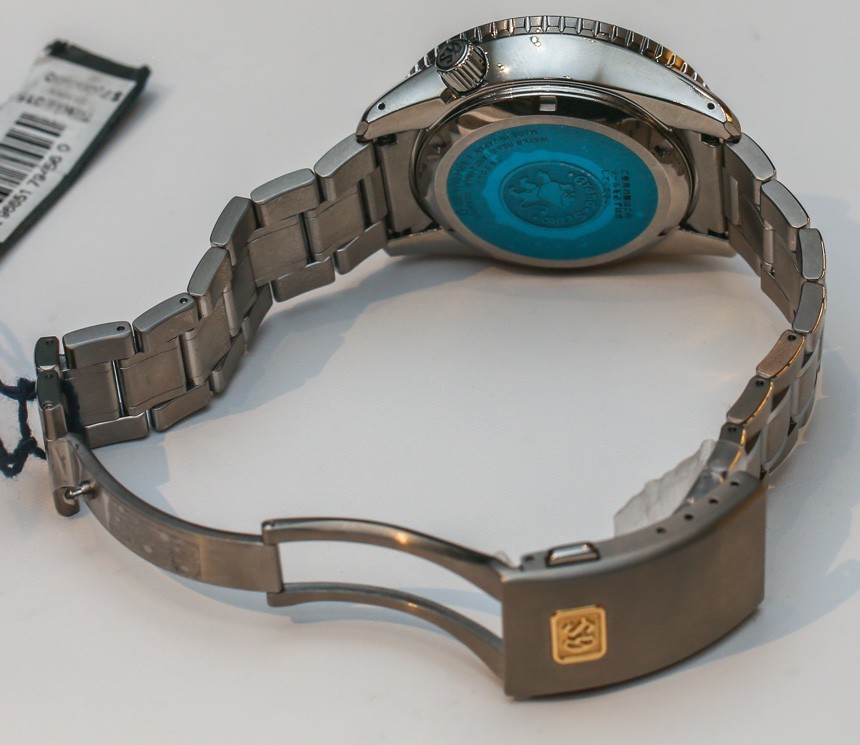 Spring Drive movements have the smoothest sweeping seconds hands you’ll probably ever see, as they glide in one continual motion rather than tick. You get a similar effect in watches with the Bulova Precisionist/Accutron II movement that also have sweeping seconds hands – though the Precisionst is purely quartz. In addition to the time and date, the 9R66 automatic movement also has a GMT function. I fell in love with watches that contained this movement when I first learned about the steel version of the Grand Seiko Spring Drive GMT (well, there are a few of them, actually), known as the SBGE001. This was Seiko’s advanced answer to the Rolex GMT-Master and included a rotating 24 hour indicator bezel as part of the 43.5mm wide case. I believe that measurement includes the crown. The case is 14.7mm thick. 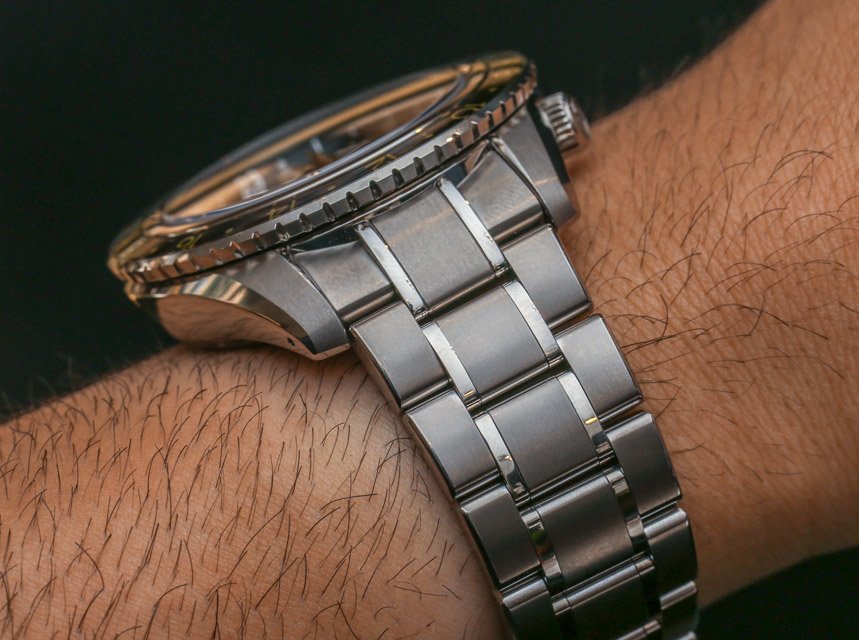 The SBGE001, while not a new watch, is still produced by Seiko, and this Grand Seiko Spring Drive GMT SBGE015 was added as a close kin around 2011 as an Asia-only model. Today, the SBGE015 is officially available around the world, but in rather limited numbers. For example, in the United States the Grand Seiko Spring Drive GMT SBGE015 is exclusively available in Seiko’s brand boutique store in New York. What makes the SBGE001 and SBGE015 different are materials. The former is in steel with matching hands and hour markers, while the SBGE015 comes in a titanium case with gold-toned hands (aside from the GMT hand), hour markers, and indicators on the bezel. In person, it is extremely handsome and melds modern sentiments with a bit of retro class. 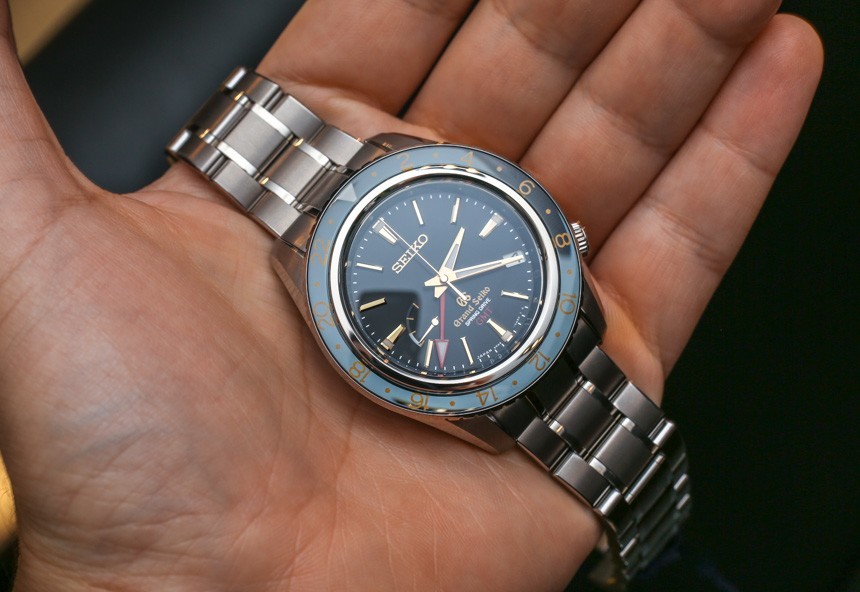 I believe that this Grand Seiko Spring Drive GMT watch was one of the first to put a sapphire crystal over a rotating watch bezel, which was common for a few years until we started to see ceramic bezels. Sapphire bezel inserts are generally more expensive and are usually pretty cool when you can find them. The watch is also all about ergonomics, with a super comfortable feel and 4 o’clock crown position so that it doesn’t stick into your wrist.

Compared to the steel SBGE001 watch, the Grand Seiko Spring Drive GMT SBGE015 feels like a feather on your wrist given the more light weight metal. Titanium Grand Seiko watches aren’t terribly rare, but they are often limited edition or more exclusive models compared to their steel cousins. It is comfortable enough to wear all the time and as a daily wear, if you wanted to have just one watch. 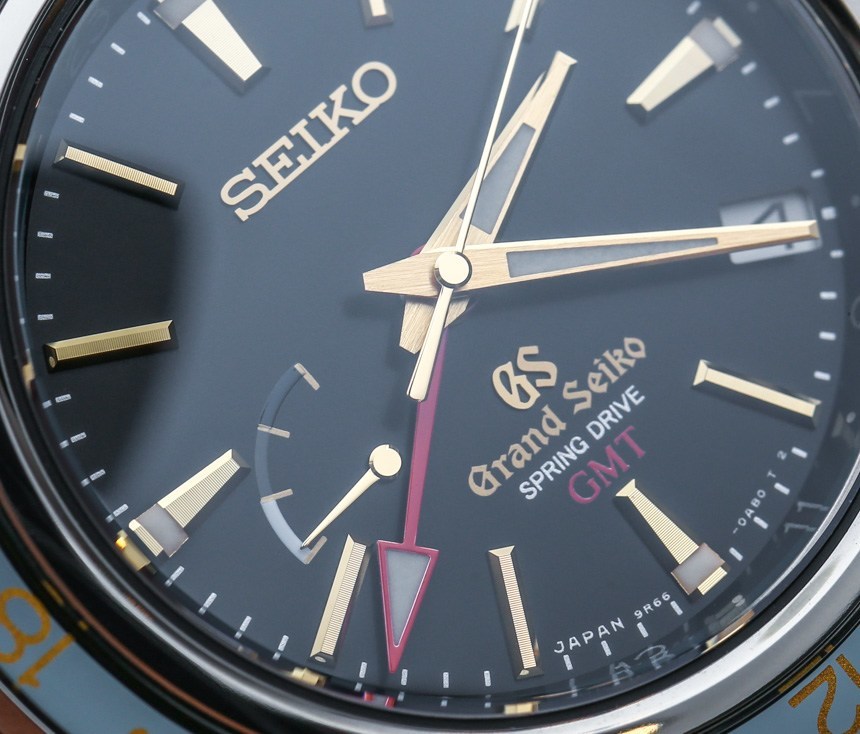 Legibility is really something that Seiko excels at, especially in its Grand Seiko line. It begins with a very high quality sapphire crystal over the dial that is given a fantastic anti-reflective coating on the inside. Seiko marries colors and materials as well as finishing on the dial very well. The hands are all precision cut and polished, so there are no distracting areas of glare of light reflectivity. The proportions of the the dial elements are also ideal, and from a fit and finish standpoint, the detail on the dial is superb. While I didn’t think the gold “gilt” dial of the Grand Seiko Spring Drive GMT SBGE015 would appeal to me more than the SBGE001, I do like it a bit more, as it makes the timepiece a little bit more distinct and doesn’t take away from its classic appeal. 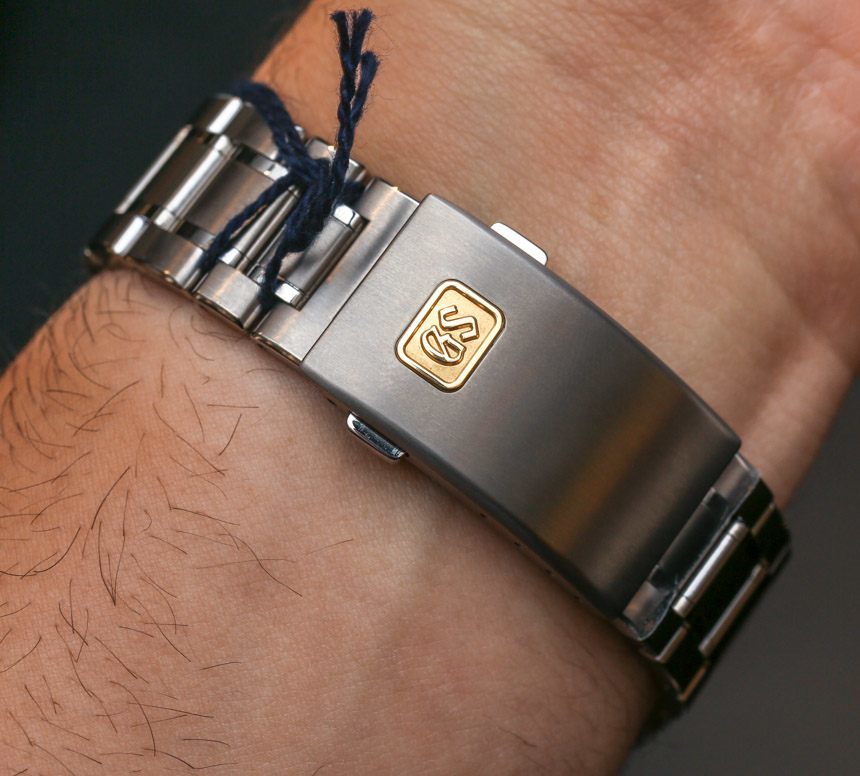 Of course, the watch comes standard on a matching Grand Seiko titanium bracelet, but I’ve seen people put timepieces like this on straps. There are a lot of interesting color options that would go well with this watch actually. Having said that, I am pretty sure that I would keep mine on the bracelet. From a durability and sports standpoint, even though the Grand Seiko Spring Drive GMT SBGE015 has the look of a dive-style watch it isn’t exactly one. However, with 200 meters of water resistance, it is among the more durable Grand Seiko models, as most have 100 meters of water resistance. Seiko wants to make sure that you can go swimming in pretty much any Grand Seiko model, but I like that while you may not be able to rely on this Grand Seiko Spring Drive GMT as a professional diving tool, you could (if you wanted to) take it recreational diving. Then again, why do that, when Seiko has NO shortage of great dive watches such as the Marinemaster collection. 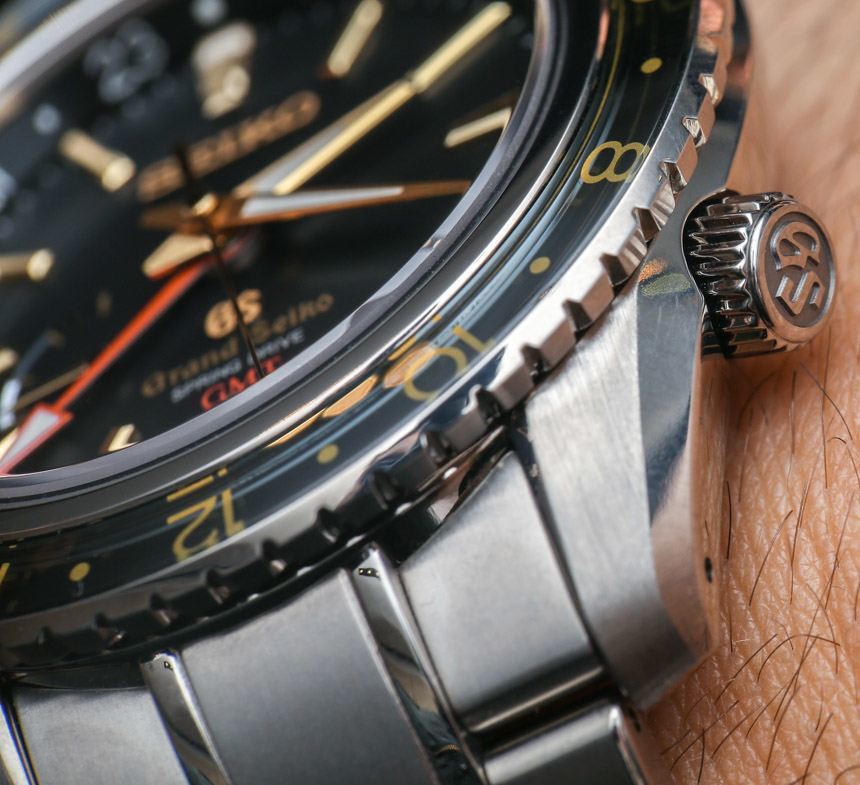 Don’t let me forget to mention that the Grand Seiko Spring Drive GMT SBGE015 case is also decently anti-magnetic (resistant to 60 gauss). Overall, you have a somewhat dressy, highly wearable, timeless sports watch, with all the detailing you could hope for in a light weight package that isn’t that much more than the standard steel SBGE001 model. That said, neither of these watches is, strictly speaking, “cheap,” but compared to most Swiss watches, you get a lot more bang for your buck. It isn’t only the solid value proposition that gets me excited about this version of the Grand Seiko Spring Drive GMT, because even at a few thousand more dollars, I would still be lusting after it. Ask me about modern watchmaking for today’s detail snob, and I’ll always show you a Grand Seiko as one of the examples.

Seiko has the Grand Seiko SBGE001 priced at $6,300 while the titanium and gold-tone dial Grand Seiko Spring Drive GMT SBGE015 has a retail price of $7,000. grand-seiko.com