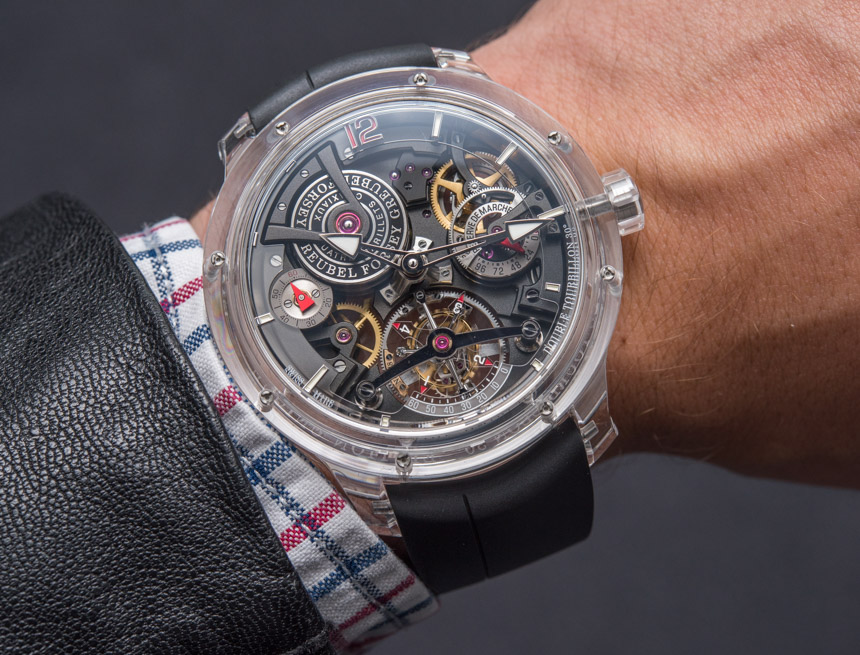 Joining the sapphire-cased transparence craze today is the Greubel Forsey Double Tourbillon Technique Sapphire, a limited run of just 8 pieces which wrap one of the master watchmaker duo’s most impressive calibers into a sapphire sandwich.

Haute horlogerie may still be a great deal about intricate finishing and age-old complications, but some of the more modern players in the industry have not been shying away from using the latest manufacturing techniques to spice their “high watchmaking” offerings up a bit. We have seen black-coated pieces, different types of carbon fiber used for cases and dials, even… You get where I’m going. More recently, though, it’s been all about sapphire – an old-new material for watchmaking. Old because it’s been used for front and back crystals for longer than we care to remember, and new because it was only very recently that manufacturing techniques have allowed for the crafting of more complexly shaped components. 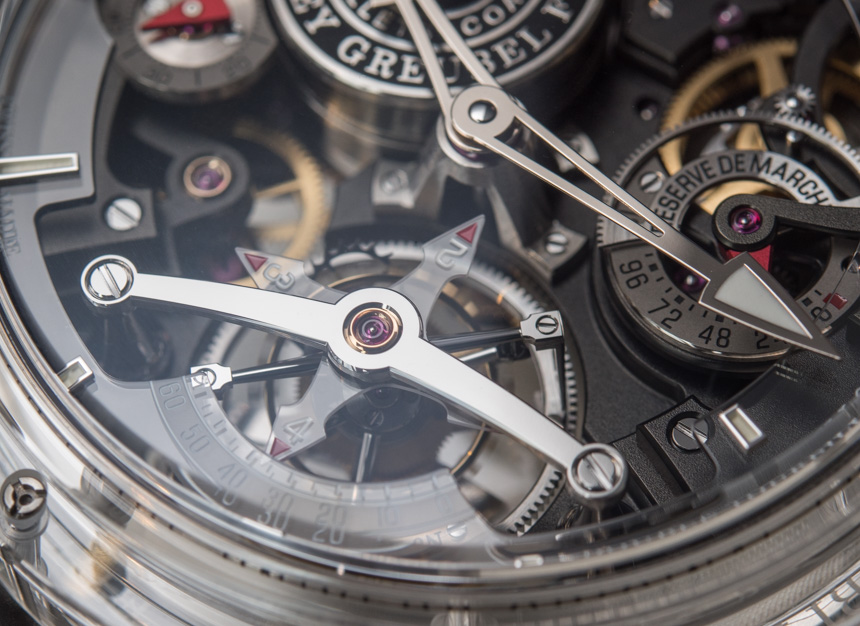 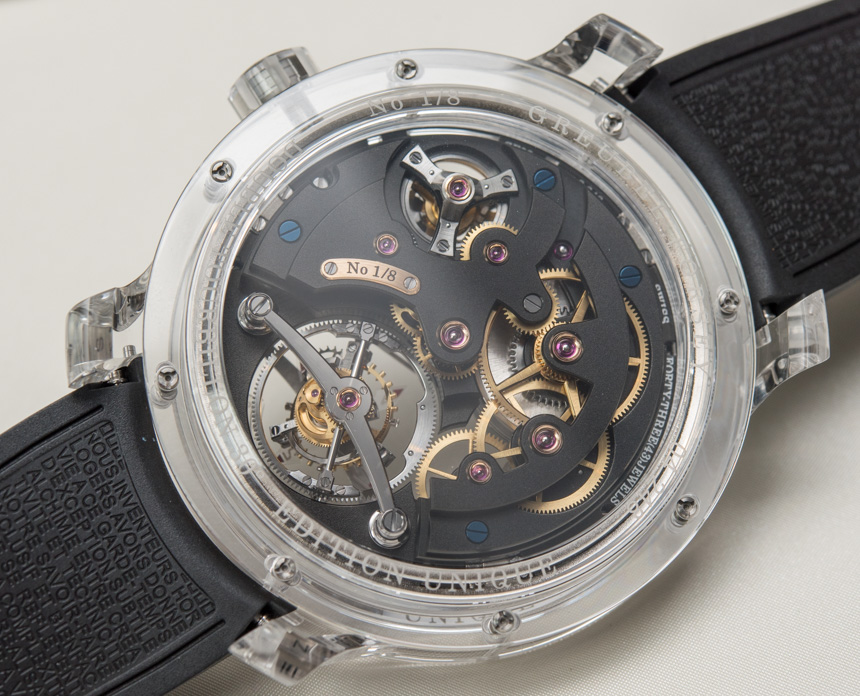 Greubel Forsey has used sapphire in a novel way before – but they weren’t too loud about it at the time. Used for a unique sapphire bridge and dial, they experimented with sapphire in more novel and complicated ways in their Tourbillon 24 Secondes Contemporaine (hands-on here). Now, however, they have taken things to the next level as the sandwich construction of the case – meaning the case-back, the case band (or middle section), as well as the one-piece bezel and front element – are all crafted from this highly scratch-resistant material. 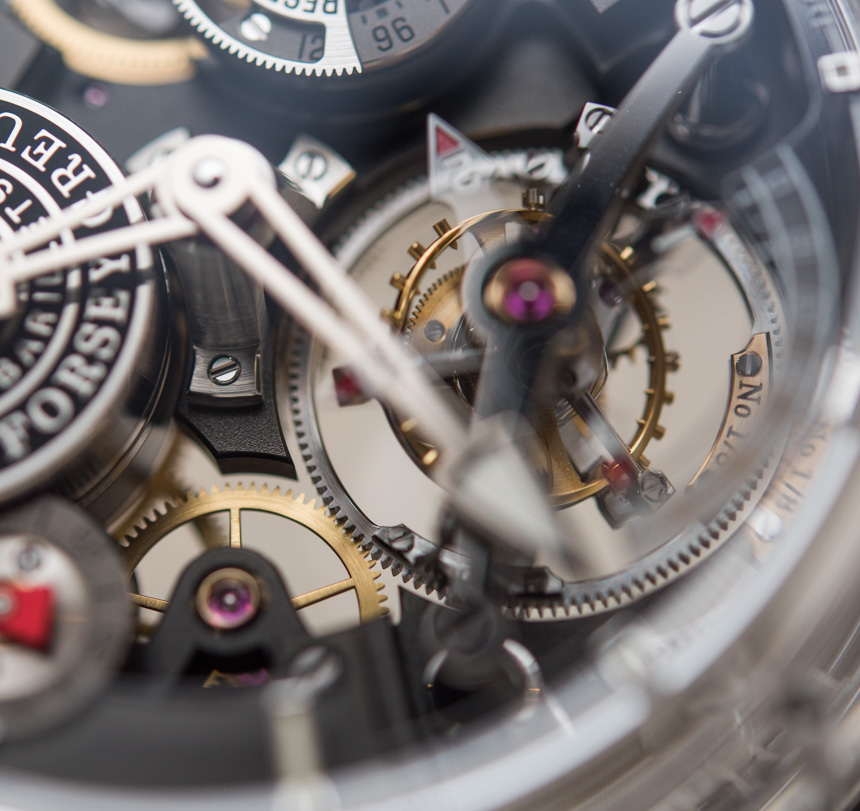 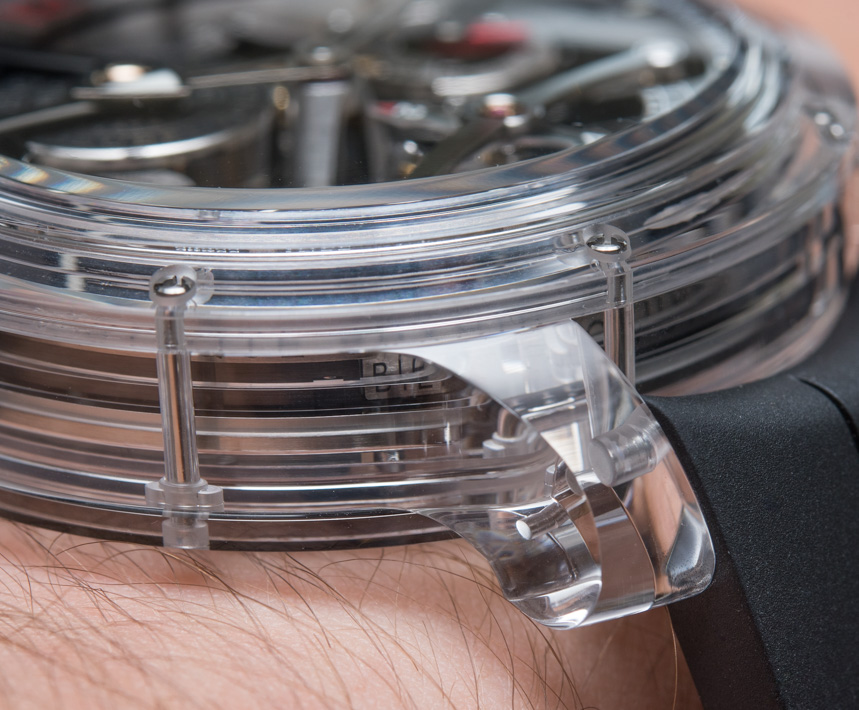 There sure is plenty of eye candy to call for your attention on the Greubel Forsey Double Tourbillon Technique Sapphire, but it’s an oftentimes less prominent element that caught my eye first: the lugs. I might have a developing medical case of lug-affection (a very watch-nerd-specific illness, I presume), but it genuinely wasn’t the 396-part movement or the frantically spinning double-tourbillon that stood out most for me upon first sight. It really was the lugs. 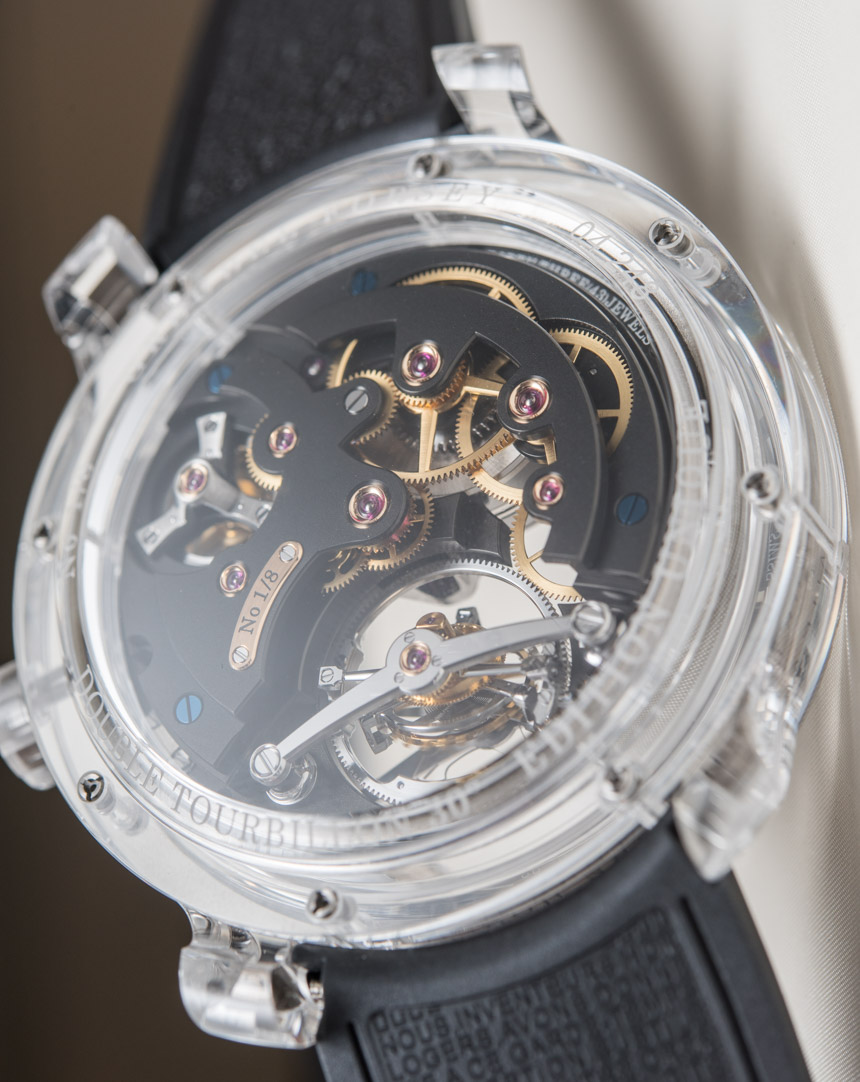 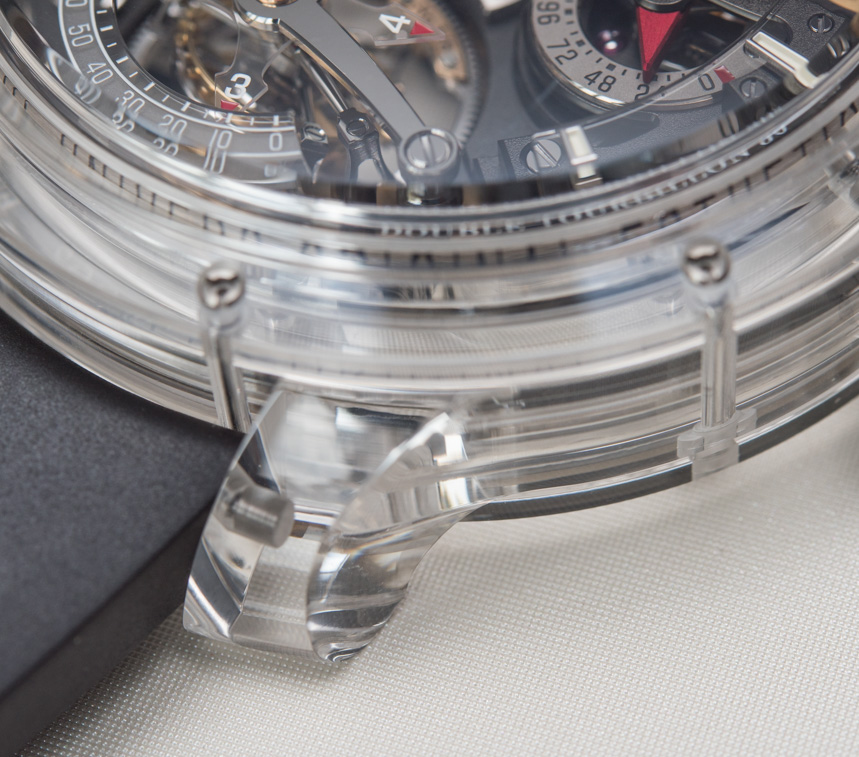 There is this complex, curved, and in fact concave-shaped lug design that is rather unique to Greubel Forsey, even though it is probably one of the least-interesting-sounding parts of a Greubel Forsey timepiece… And yet, to see this crafted in sapphire was what stood out to me at first sight. I presume you will not be surprised if I say: “But wait, there’s more!” 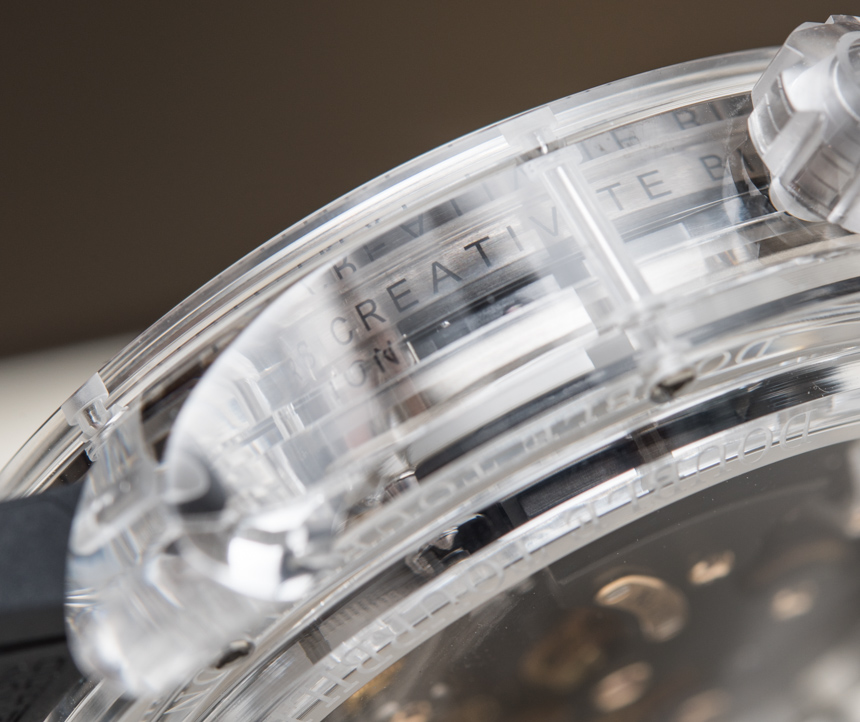 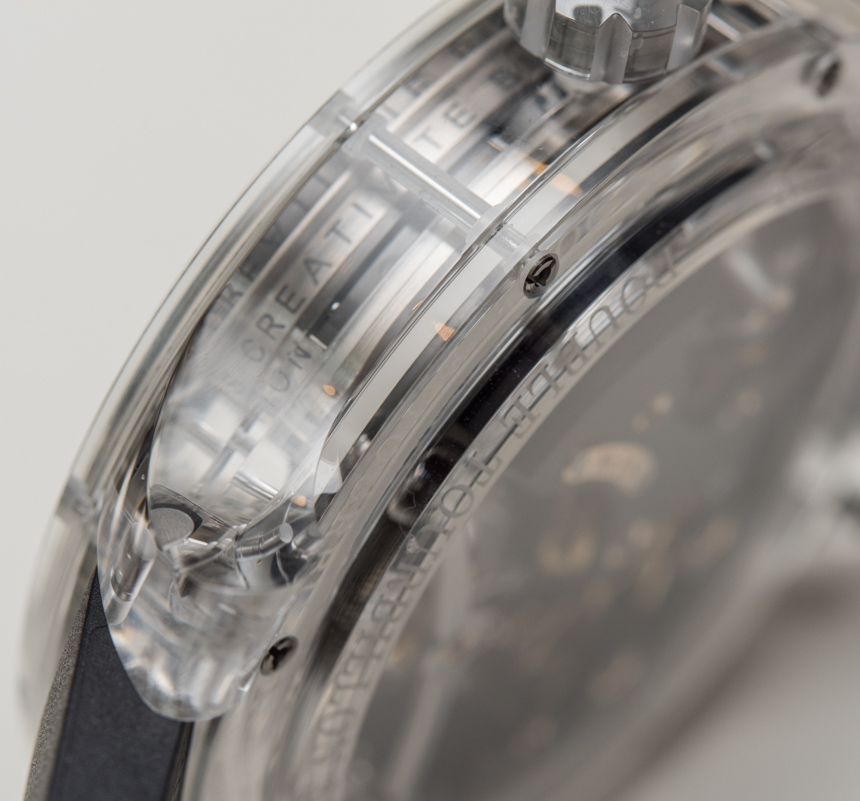 As I mentioned, the case is composed of three main components, each of which should be read in the voice of a television spokesman: Pure sapphire! You don’t see – let alone touch – any large metallic parts, it is just the silky smoothness of sapphire, interrupted eight times in the bezel and case-back by the revealed heads of the tiny screws which keep the sapphire sandwich from slipping into pieces like a Big Mac after the first bite. 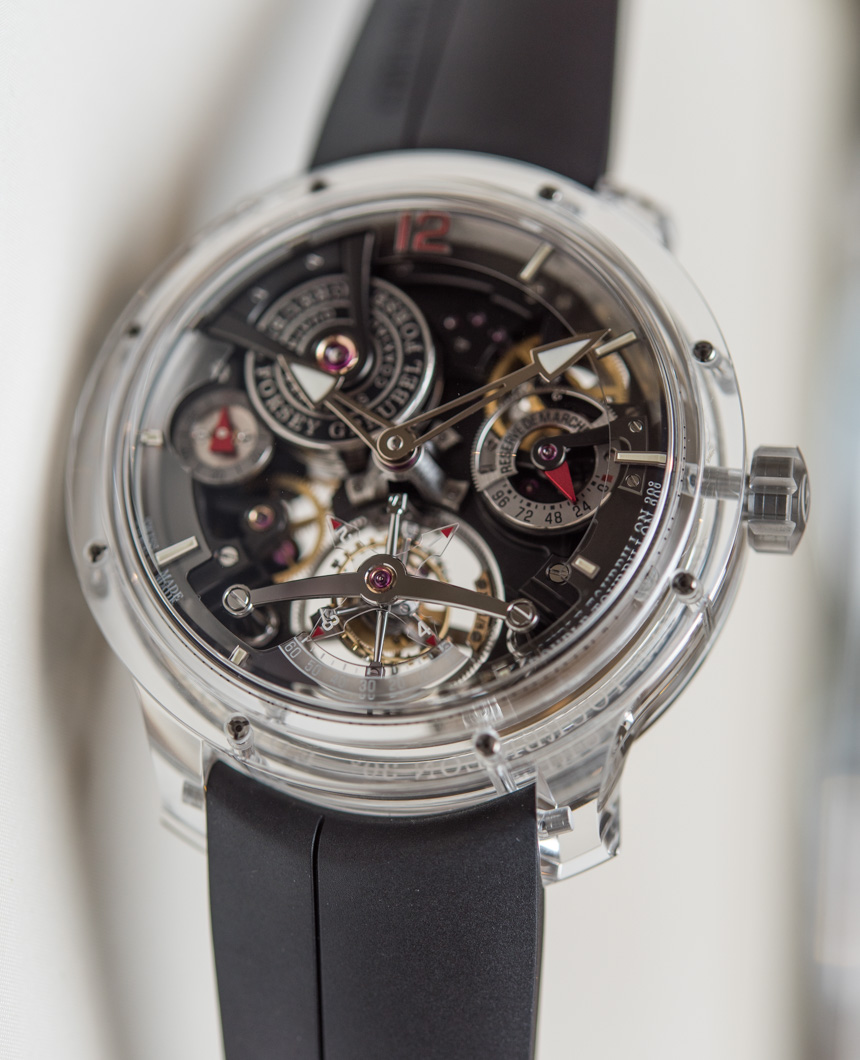 Additional and indeed rather neat details include the side wall of the movement that has been boldly engraved with some of the slogans we have gotten used to seeing from Greubel Forsey. The sapphire crystal crown, which feels buttery smooth and yet extremely precise upon winding the 2-2 mainsprings packed into the two stacked mainspring barrels, as well as the “secret text” in relief on the back of the black rubber strap. Speaking of the strap, the DT Technique Sapphire will come with the pictured black rubber strap, a transparent rubber strap, and what I think it will probably look the best on, a black crocodile leather strap. 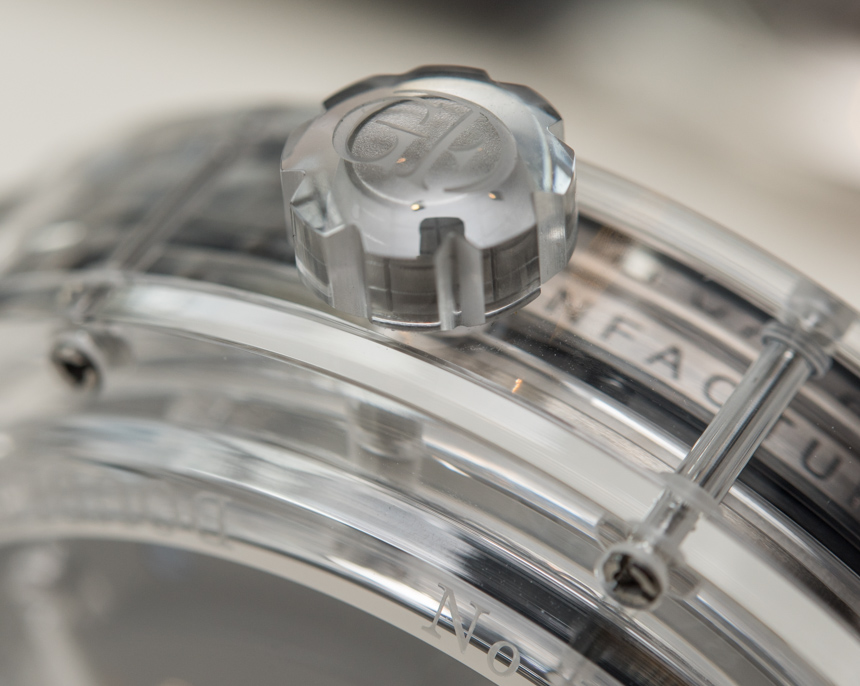 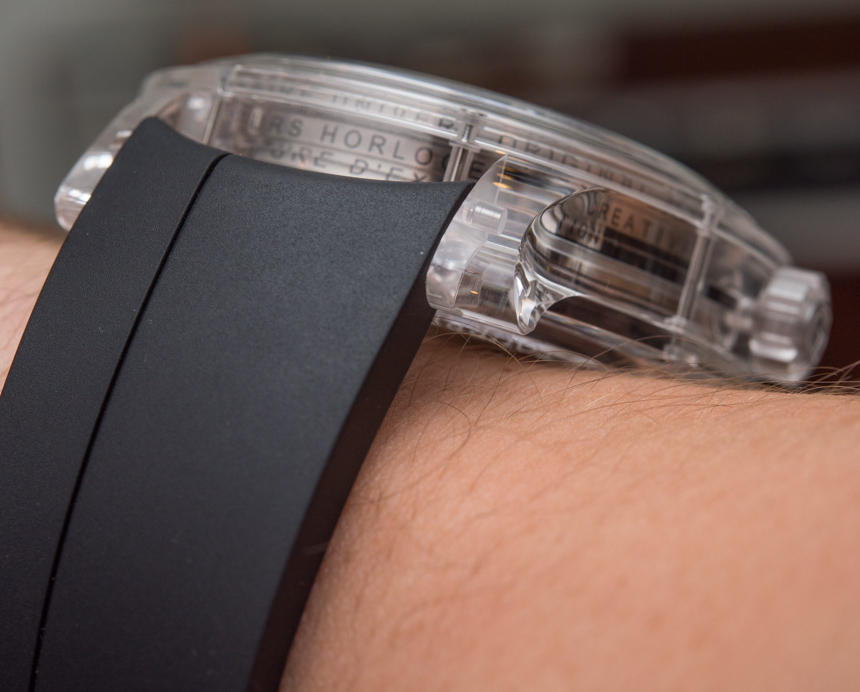 The bezel and front crystal, as well as the case-back and its frame, are both crafted from just one solid piece of sapphire each. The tricky part is the case-band or middle segment, which has been machined but then painstakingly hand-finished to create those uniquely shaped lugs that I went on about recently. 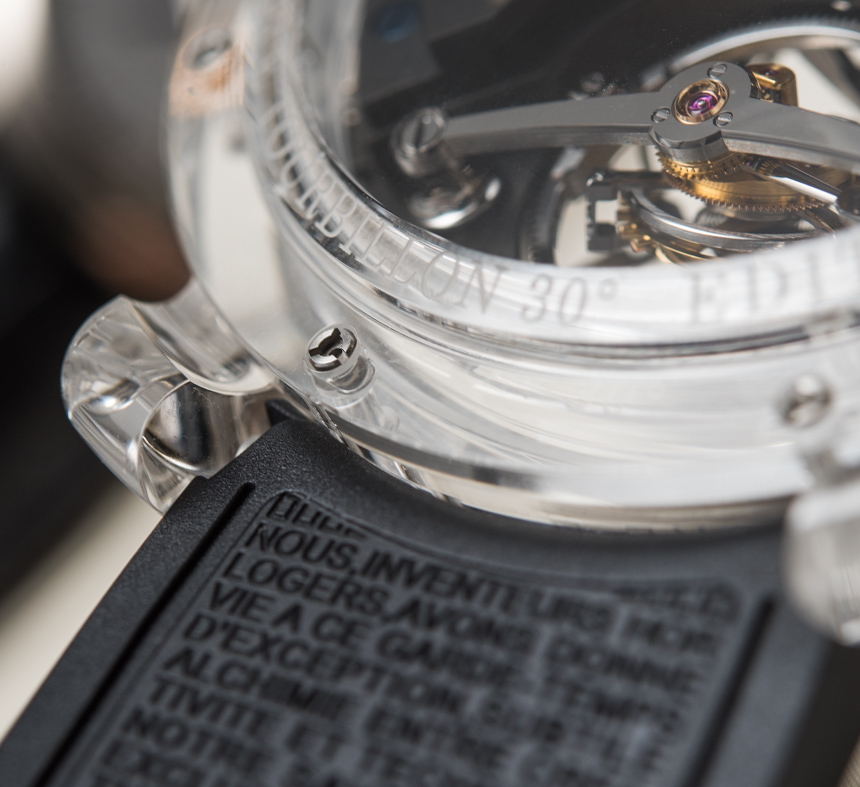 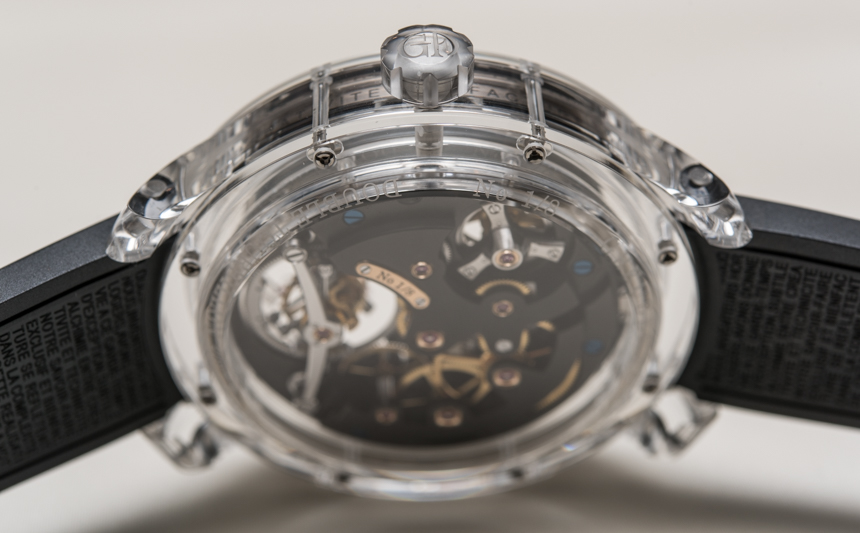 Truth be told, the sapphire case suppliers – because make no mistake, almost all brands have to rely on specialized suppliers to have these cases made for their specifications – did have plenty to work with here: the Greubel Forsey Double Tourbillon Technique Sapphire is a whopping 49.95 millimeters wide and a more acceptable 17.15 millimeters thick. The Double Tourbillon movement with its 393 parts, 4- and 1-minute rotation times and 12.15-millimeter thickness remained structurally unmodified from previous DT Technique pieces – so it is only the case that got substantially larger when compared to previous iterations. 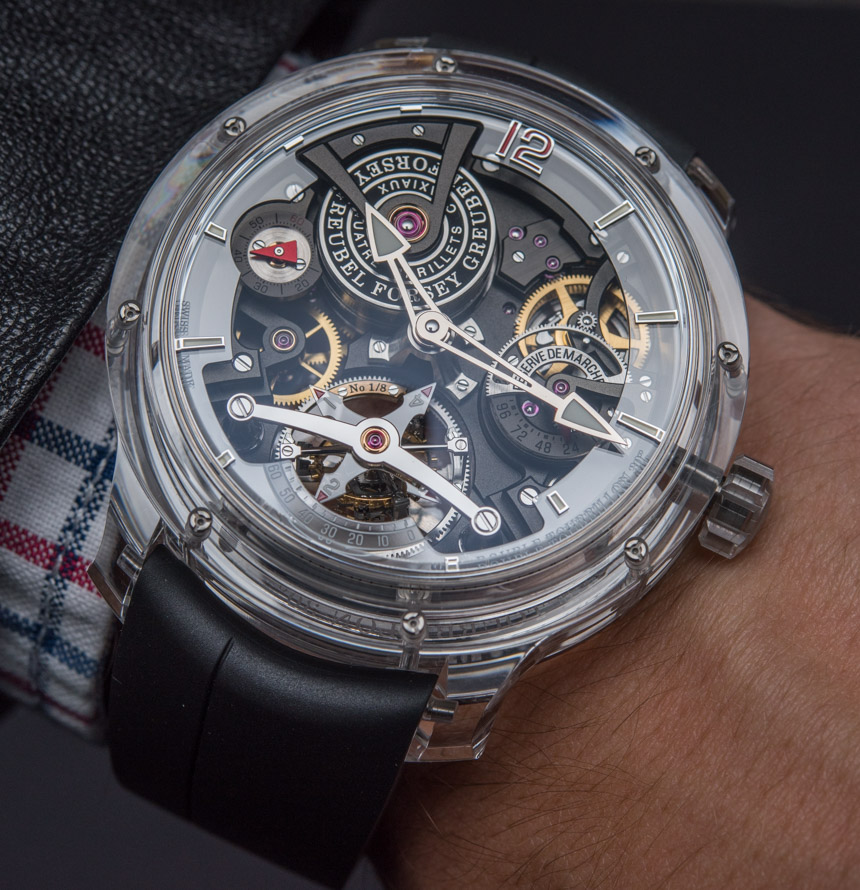 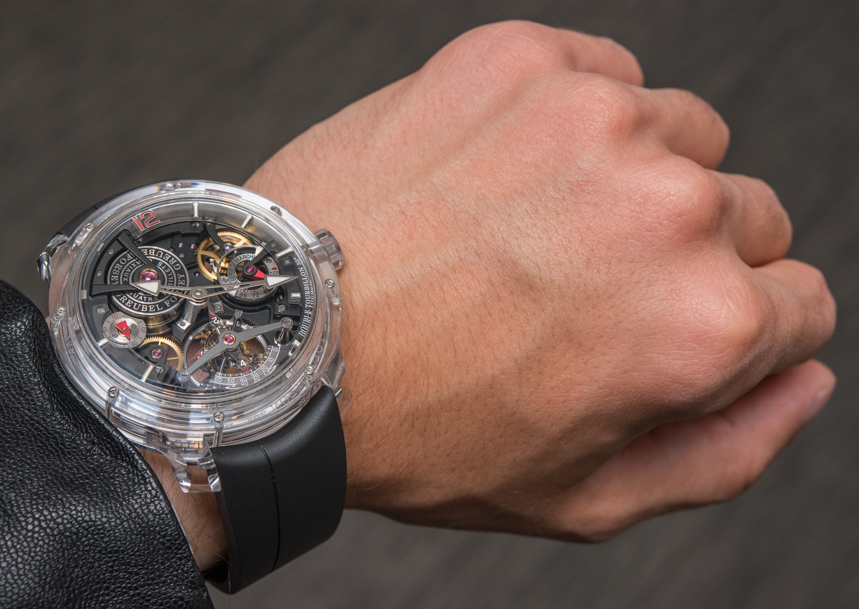 On the wrist, the 49.95-millimeter Greubel Forsey Double Tourbillon Technique Sapphire delivers no surprises: it’s too large for a wrist like mine that mother nature designed for <44-millimeter-wide timepieces. It is objectively large and flashy, and while I guess you could describe more than a few of Greubel Forsey’s previous creations with those adjectives, this Sapphire edition really takes things to the next level. 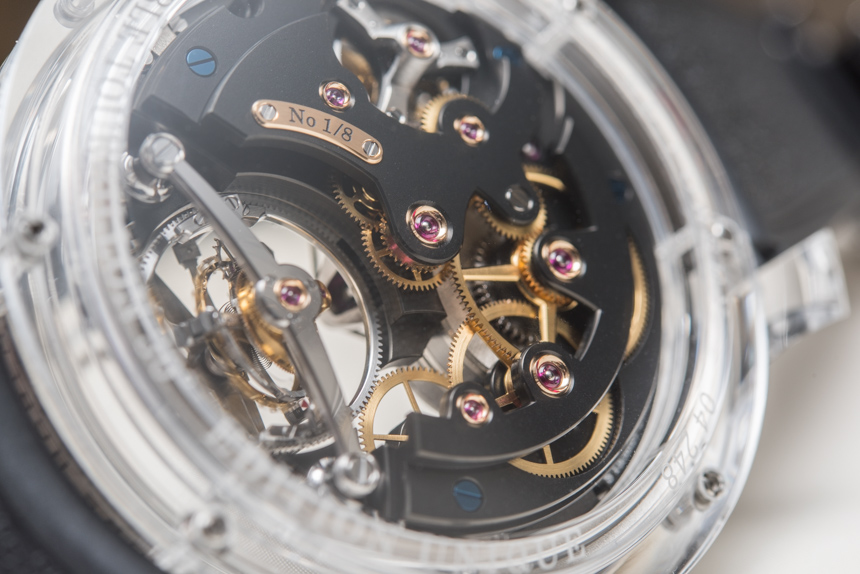 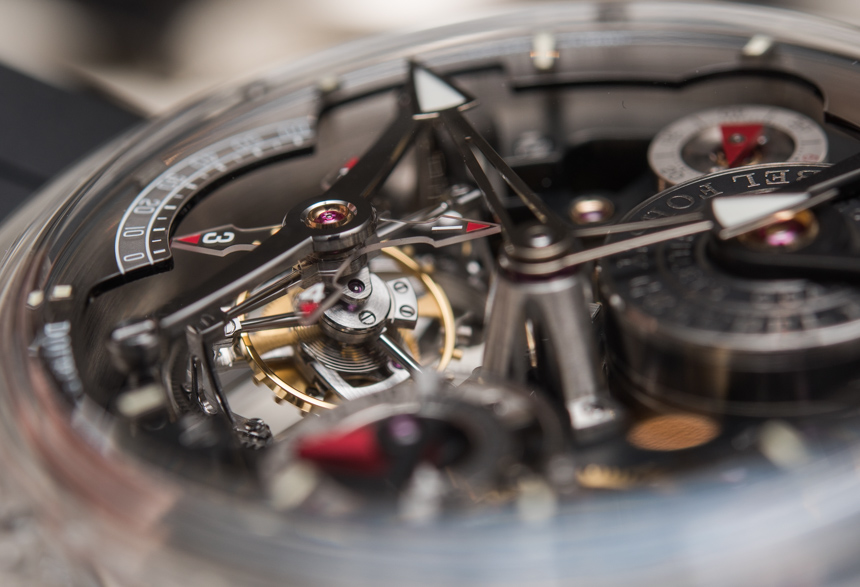 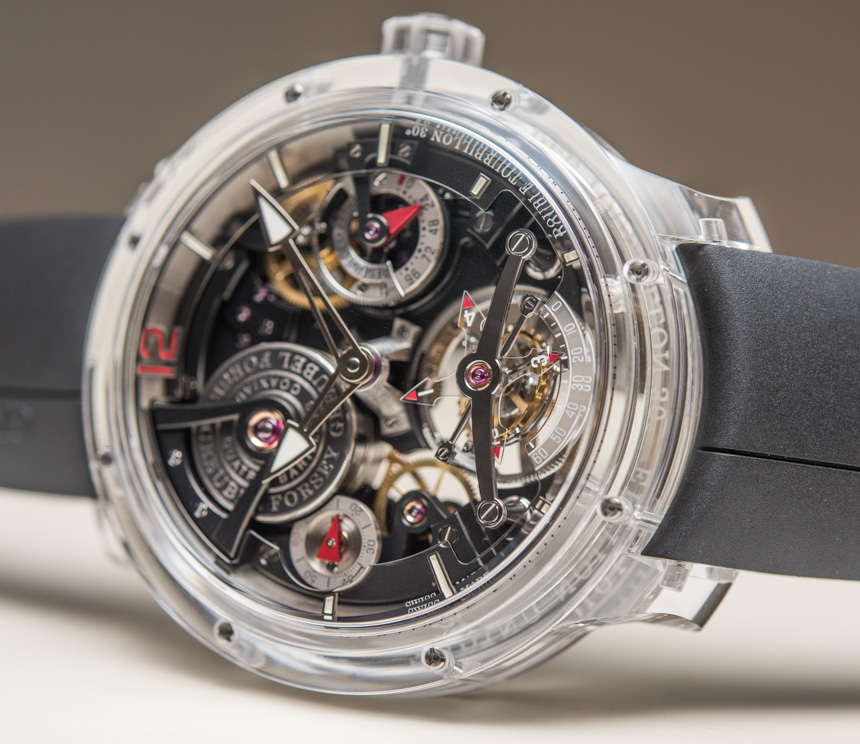 When going hands-on with this new piece, I had the chance to chat a bit with Stephen Forsey about the importance of not stepping over that fine line that stands between pushing the boundaries of what’s technically possible, and what is morally (ahem!) acceptable today in the luxury watch industry. The thing with this particular package from GF right here is that on the inside it is quite clearly still a one-hundred-percent original, blue-blooded Greubel Forsey creation. Let’s not forget that it was the Double Tourbillon caliber that they managed to tweak to such staggering chronometric performance that they won the International Chronometry Competition with it a few years ago, scoring an unprecedented 915 points out of the 1,000 maximum, with a stable and indeed meticulously tested timekeeping accuracy of far below 1 second per day. 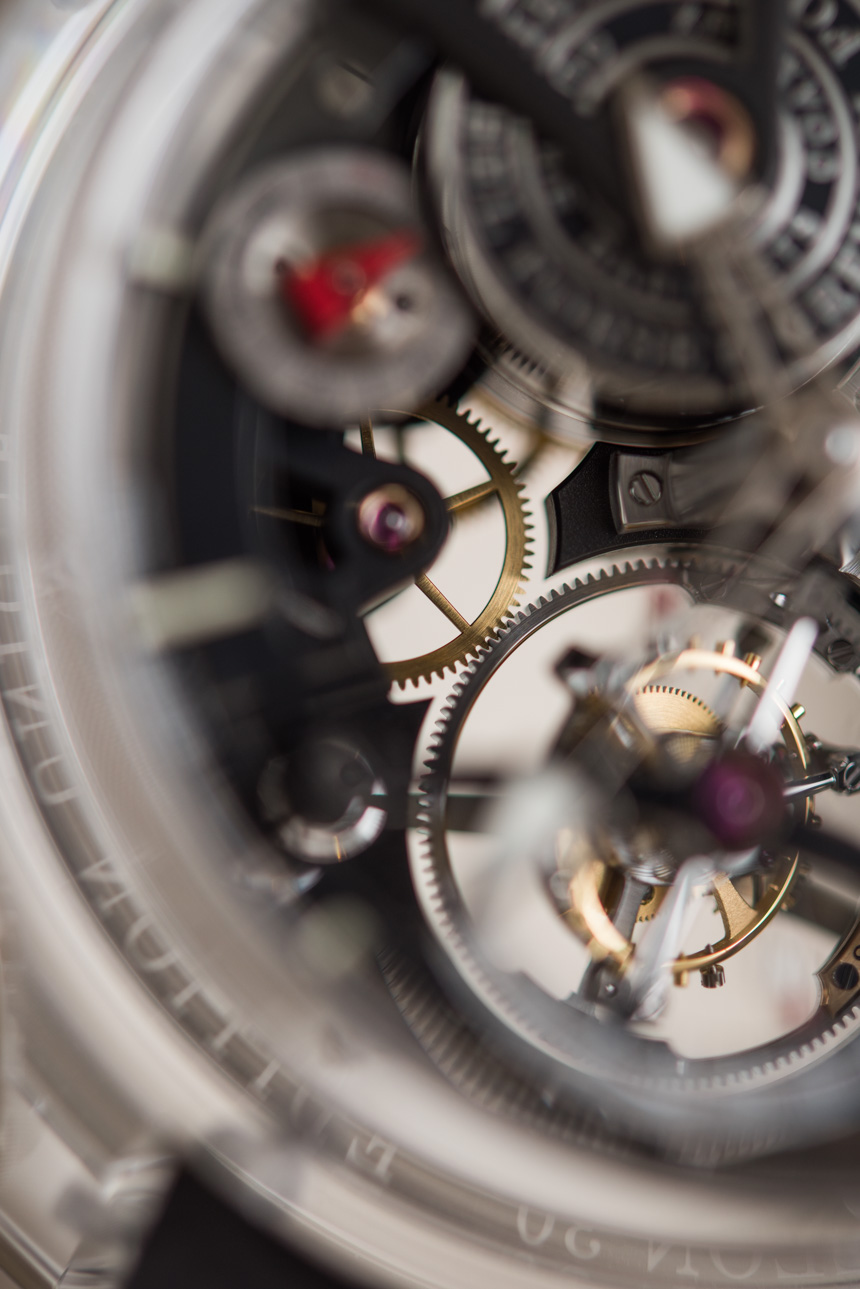 The decidedly three-dimensional structure of the movement is as impressive as ever. Upon first look, you may take it for a skeletonized movement but it really isn’t that. Sure, some bridges and cocks have been skeletonized, but there are entire plates and bridges completely missing from the movement, leaving vast open spaces and a lot of perceivable depth right in the center of the dial. Designed from the ground up to be like this, it takes a little while to be able to appreciate how this is different to a movement that has been designed to be of a more ordinary construction, and just hollowed out wherever possible. 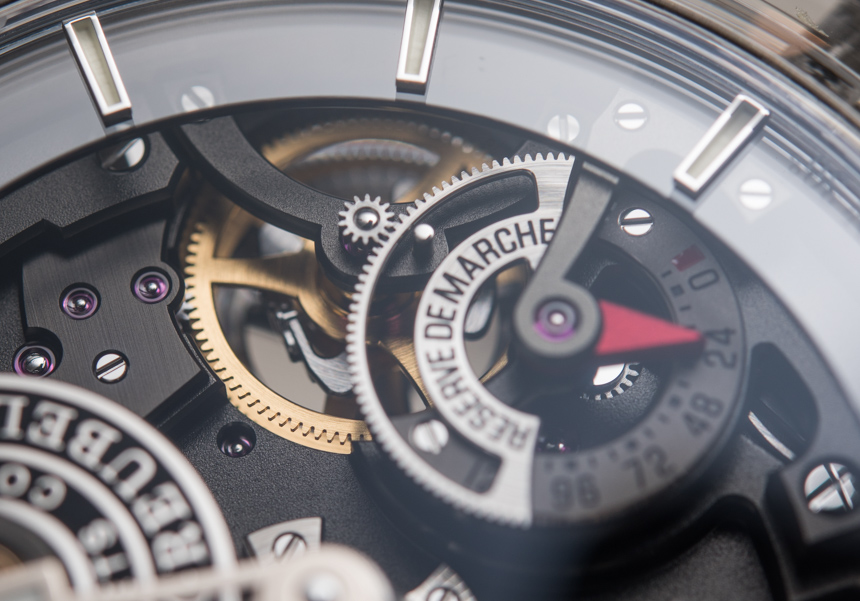 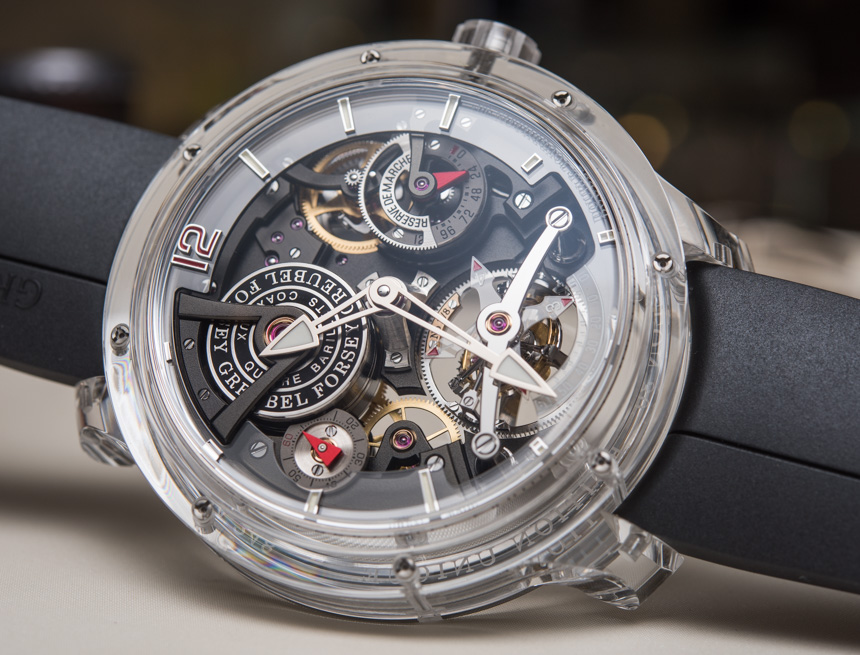 This final color scheme that they went for on the bridges and other components works brilliantly when it comes to highlighting the sapphire case that really pops and stands out from the rest of the prominent aesthetic elements of the Greubel Forsey Double Tourbillon Technique Sapphire. Most of the larger, flat surfaces have been “frost-finished” by hand to create a textured, bumpy-looking surface, only for these to be then beveled on the edges and finally to be coated to a rich black color. You can spot this rarely used (because it genuinely is a pain in the neck – and hand, and whatever else – to do) traditional finishing technique under the modern, stealthy black coating – so this mixture of modern and historical extends from the case all the way into the movement. 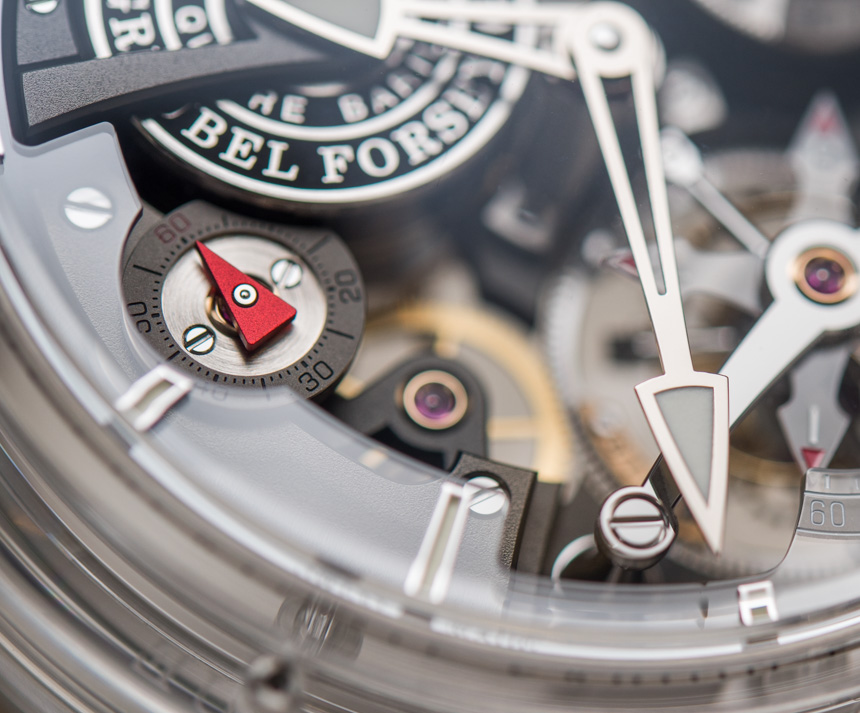 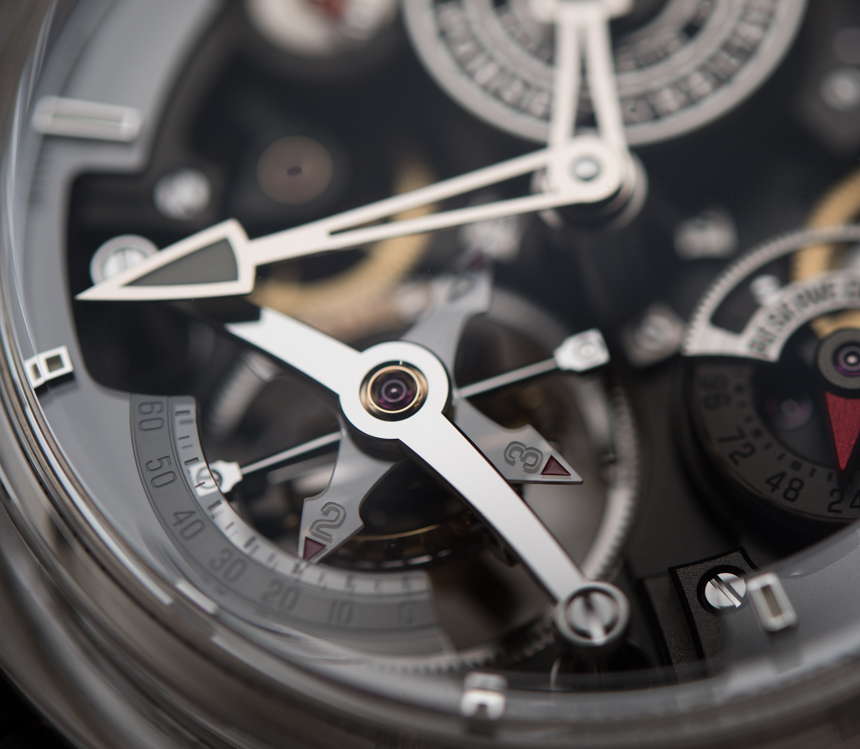 The end result is equally mixed: it is not that clean looking, restrained, but overwhelming quality that we have seen in some other Greubel Forsey pieces, but rather something that just jumps right out, begs for attention and a closer look. The quality of the finishing on the movement and indeed the case is still some of the absolute very best imaginable, but the overall styling makes this more of a showstopper piece than anything else. 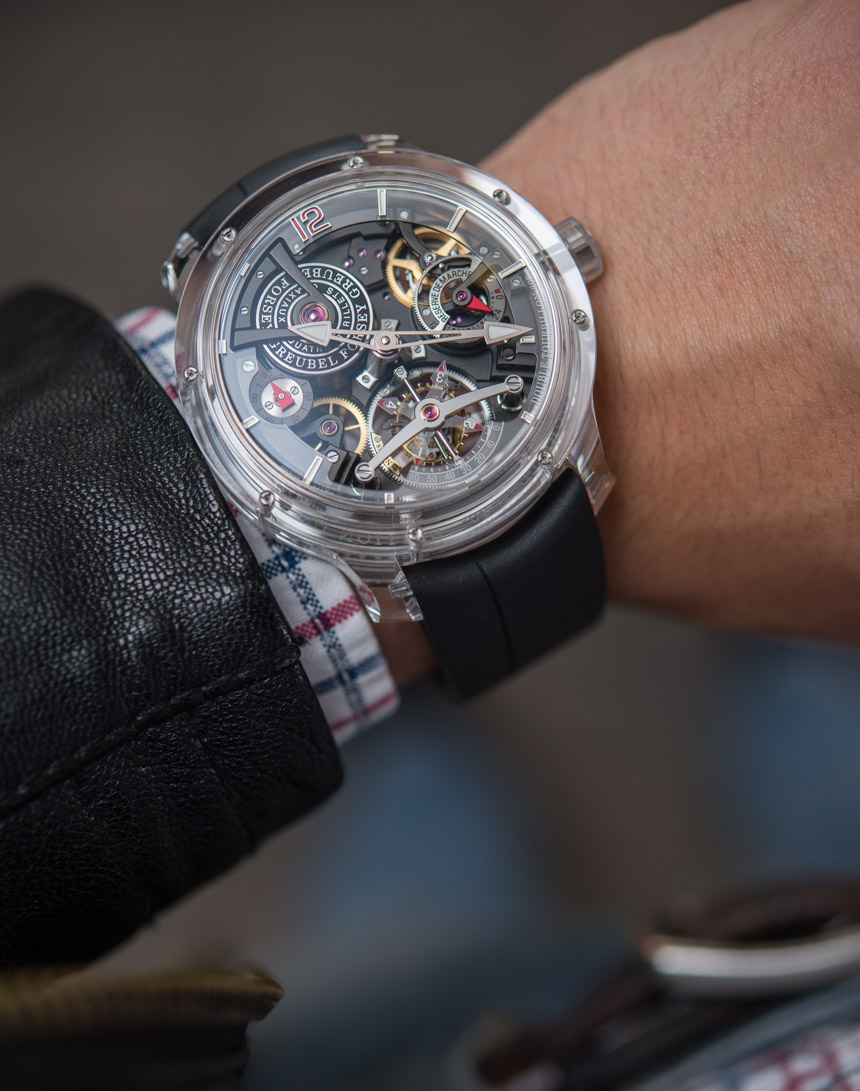