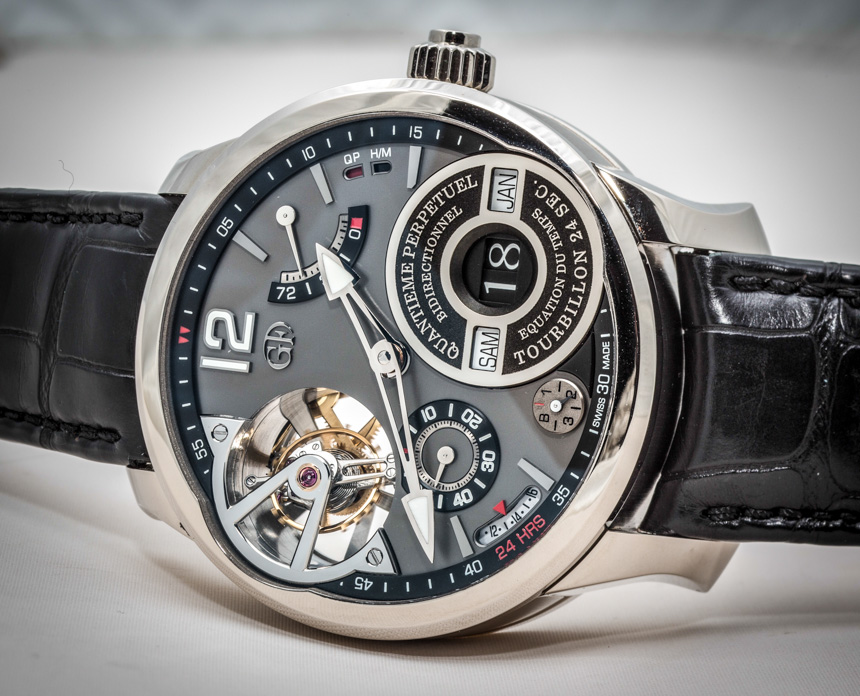 Greubel Forsey is, and has always been, famous for their mind-bending innovations, all but a few achieved in pursuit of excessive chronometric performance. For 2014 they have released their first perpetual calendar watch (AKA “the QP”) which is an amazing feat of horological engineering.  Much of their focus has been on the tourbillon and in the past Greubel Forsey has developed this to be faster, inclined, multiple-axes, double and quadruple tourbillons – you name it and they have probably done it. While fans of such horological feats were undoubtedly well catered for by the brand, it has to be said that it was about time that they began entering some other territories of fine watch making. They made their first – likely painful – step away from the tourbillon in 2011 by developing the GMT, a watch which combined world time indication with a tiny, elaborately crafted 3-dimensional globe spinning on the dial side of the watch. For 2014 Greubel Forsey carried on this tradition by debuting the QP à Équation, a novelty that couples the brand’s inclined 24-seconds tourbillon with a special perpetual calendar complication and equation of time indication.

Although the QP à Équation is the first timepiece from the brand with a calendar function, it did not stop them from making it a unique one. There are three patents pending on the mechanism developed for this particular movement. The most important of the calendar’s displays are located on the lower half of the dial: the day, large date, month and also the leap year indication are set in close proximity to one another for improved legibility, while the discs for the year indicator were banished to the back of the movement. What sets the mechanism apart from others is what the brand refers to as a “coded mechanical computer system.” Sounds complicated, but if anything its complication lies in making the system as simple and as easy to use as is possible. It actually relies on a set of cams that are responsible for carrying the information respective to the length of the different months and years.

What does all that mean and what do you need to know? Well in a nutshell this is the most pleasant (and cool) to set perpetual calendar timepiece we’ve ever gotten to play with. The crown basically has either a time setting or calendar setting mode. When in the latter mode you simply turn the crown one direction for all calendar functions to advance in time, and turn the crown in another direction for it to do the reverse. It is really just that simple and the best part is that you can adjust it very rapidly. 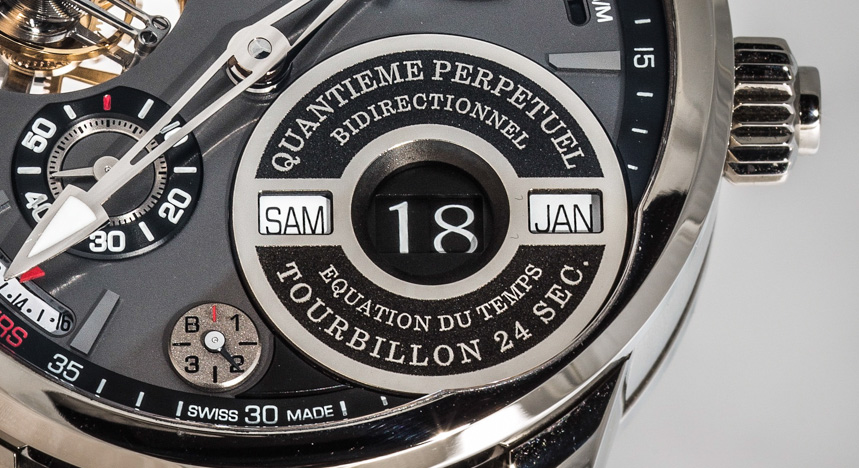 The fact that the perpetual calendar can be set through the crown makes the system more practical and easy to use compared to the majority of perpetual calendars, which rely on pushers for this purpose. Also indicated on the dial are the tiny displays for the selected function of the crown – which may be adjusting the calendar, the time, or winding the movement. The reason for all this could very well be the brand’s understanding that while a few years back they had been a relatively small manufacture catering to collectors on top of the “watch connoisseur food chain”, they have since become a better known name with new found access towards a larger group of consumers.

The consequence is that while prospective buyers from this larger group may have the funds and the interest to buy into a highly complicated brand like Greubel Forsey, chances are that some of them are steering away for better known companies for fear of lack of actual usability and practicality – if you can speak of such things when it comes to half a million dollar watches, that is.