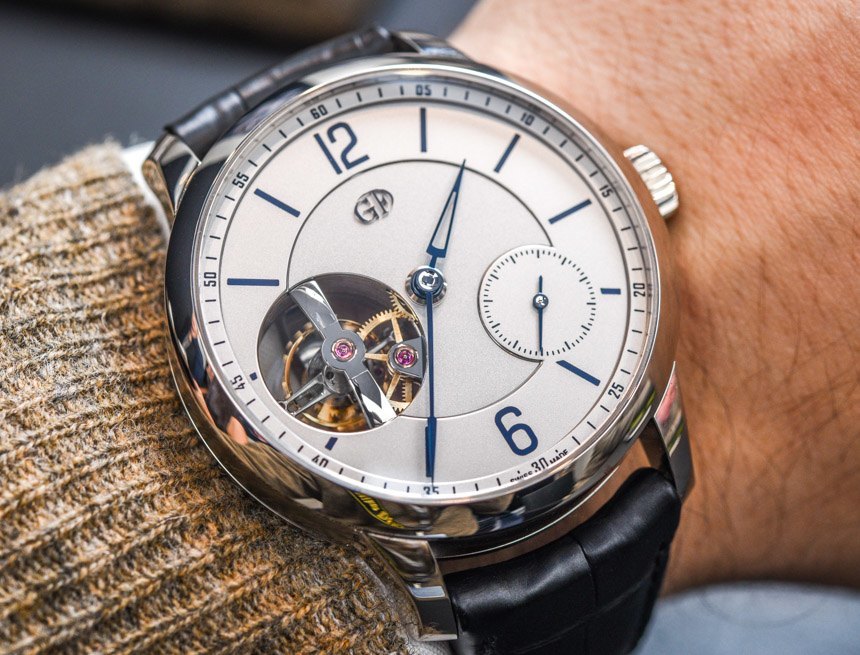 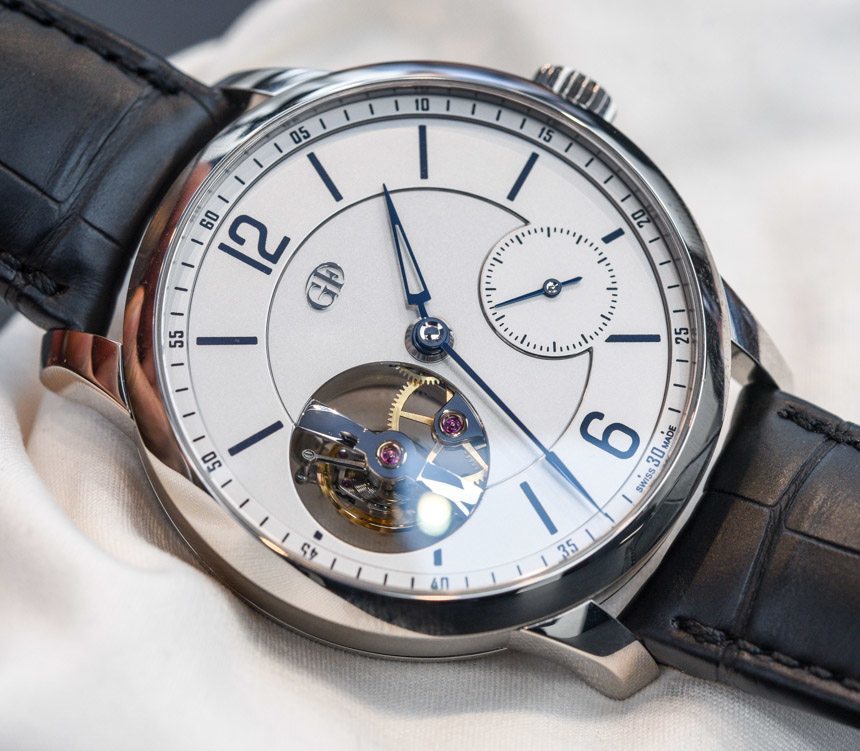 I’m looking at the new-for-2015 limited edition Greubel Forsey Tourbillon 24 Secondes Vision watch and am joined by a very special person. Stephen Forsey is the kind of guy you want selling you watches that cost more than most houses around the world. The British contingent of the English/French duo that is Greubel Forsey, Stephen is an immediately likeable chap who seamlessly goes from comfortable conversation to deep explanations of mechanical complications and production techniques used to produce what are easily some of the world’s absolutely most impressive watches. While Greubel Forsey shows at the prestigious SIHH watch tradeshow, like other high-end brands such as Richard Mille, Audemars Piguet, and Parmigiani, they are very much independent in how they are run and not part of Richemont Group that operates the SIHH. One of the brand’s most impressive “new” watches for 2015 is a totally fresh perspective on what most collectors perceive the brand to be. 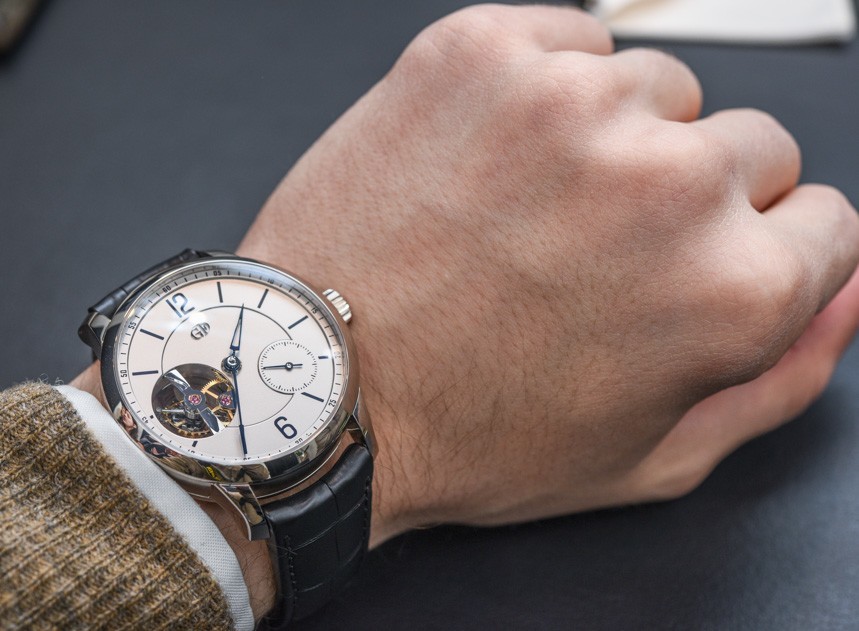 On the surface, the Greubel Forsey Tourbillon 24 Seconds Vision is the most simple-looking timepiece the brand has ever designed. What those of us who are familiar with the brand first notice is how the case is totally round, and how it sits with a much thinner profile on the wrist compared to the brands other offerings over the years. What makes this really ironic is not that Greubel Forsey designed a dressier watch, but what the design means for a brand so invested in the notion of showing off its mechanical inventions and finishing excellence. People shell out for Greubel Forsey products because they are meticulously well-engineered, and offer movement finishing and decoration that pretty much no one else in the world can match. So why suddenly a simple watch? 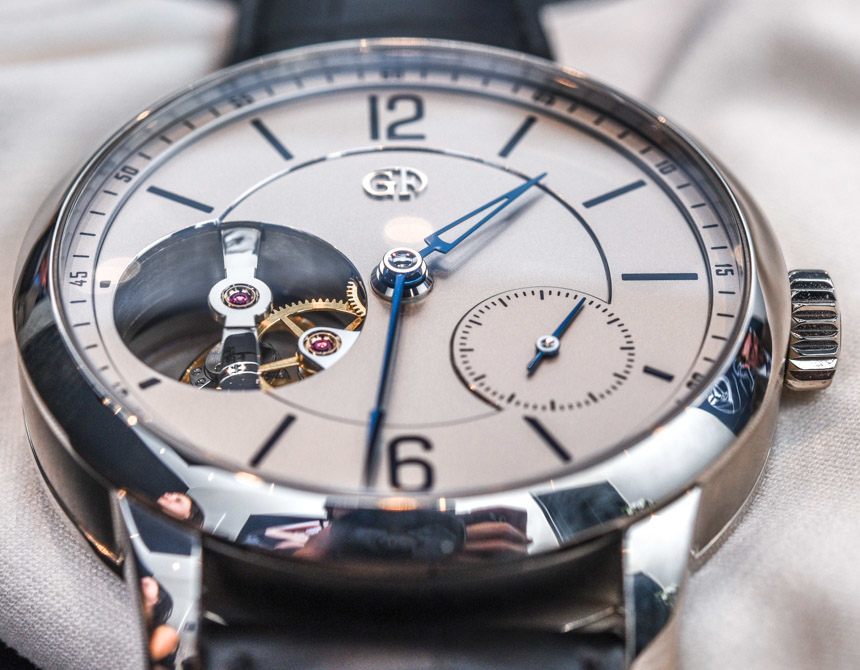 In a sense, it speaks to the maturity of the Greubel Forsey collector. Few of the brand’s timepieces are suitable for daily wear, but the watches are difficult to top in terms of an impressive feeling on the wrist. I believe that the Greubel Forsey Tourbillon 24 Seconds Vision is the answer to the question of “what can I wear if I want my Greubel Forsey experience, but also something simpler?” That is also to say that few people who buy a Vision are first time Greubel Forsey customers.

The Greubel Forsey Tourbillon 24 Secondes Vision really is one of the most comfortable Greubel Forsey watches I’ve ever worn. For 2015, the Greubel Forsey Tourbillon 24 Secondes Vision is exclusively available in 18k white gold, and the case is a reasonable 43.5mm wide. It is also just 13.65mm thick (excluding the bubble on the back), which is much thinner than other Greubel Forsey models. You also have a dial which indicates the time in a very traditional manner with hands for the hours and minutes, as well as a subsidiary seconds dial. In fact, the only dial element (aside from the brand logo) to indicate there is something deeper going on is the window to the tourbillon which is much less conspicuous that in previous Greubel Forsey models. 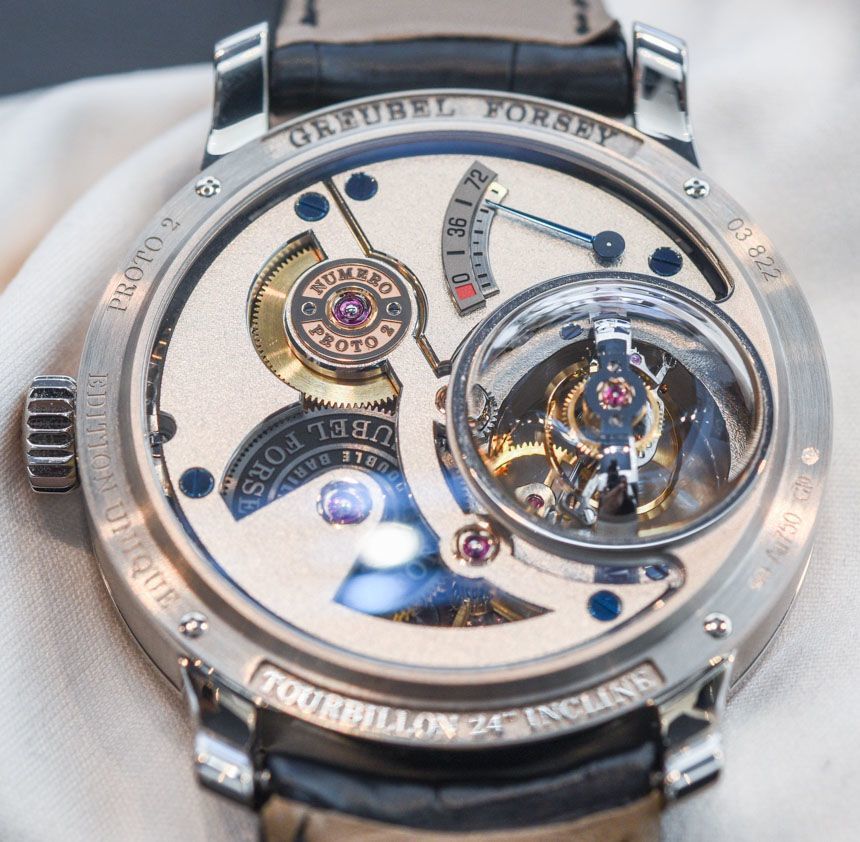 This latter element is perhaps the most controversial element of the Vision watch. If you are paying for a Greubel Forsey tourbillon, don’t you want to see it as well as possible? Over the tourbillon is a very finely finished, yet wide, bridge. This blocks some of the view, even though you can see the tourbillon underneath it. The Greubel Forsey Tourbillon 24 Secondes Vision has been designed so that if you want the most intimate viewing experience for the tourbillon, you need to take the watch off and examine the masterwork of hand-polishing through the rear of the case. The rear sapphire crystal caseback window was designed with a necessary bubble to give space for the tourbillon – otherwise, the watch case could not be as thin. 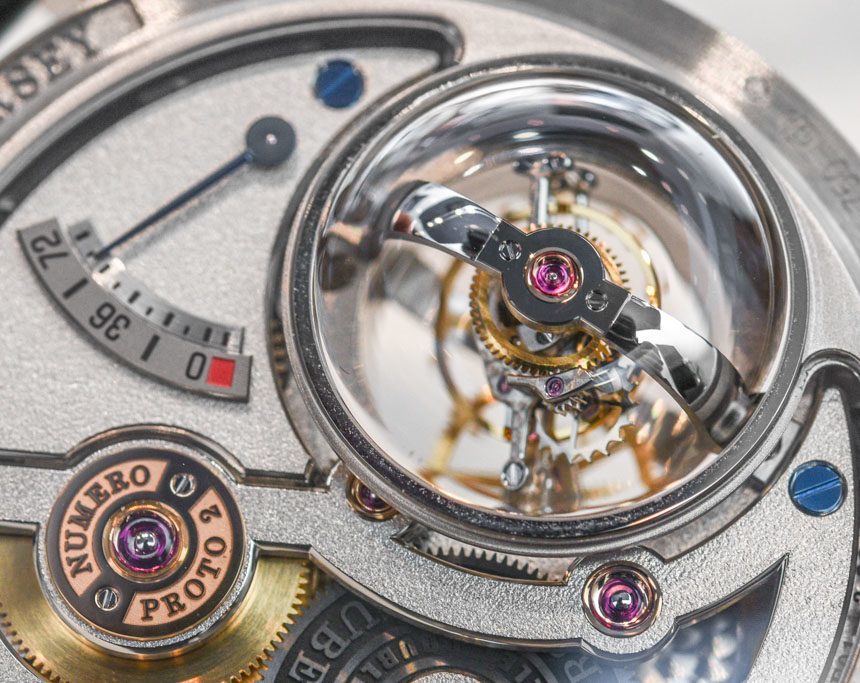 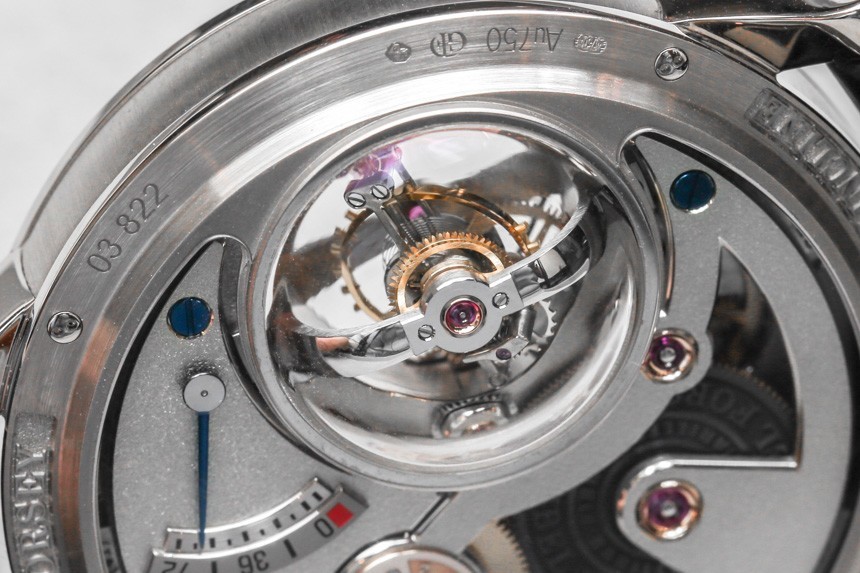 On the wrist, you don’t actually feel the bubble – at least I didn’t. The in-house made and designed Greubel Forsey caliber GF01r manually wound movement is as pretty and delicious as anything you might expect from the brand, and of course, it is an adoption of the original Tourbillon 24 Secondes which has been a hallmark product of the brand. Unlike most tourbillons which are perfectly linear and spin once each 60 seconds, the tourbillon in the Greubel Forsey Tourbillon 24 Secondes Vision is inclined at a 25 degree angle and moves much more rapidly spinning once each 24 seconds. It should be noted that this doesn’t affect the accuracy of the watch, and a traditional subsidiary seconds dial is located on the dial of the Vision watch. The tourbillon is further produced from 86 tiny parts including a titanium case and gold counterweights. It is just a fantastic thing to look at – and Greubel Forsey is easily the world’s master of the tourbillon in terms of visual design and presentation. 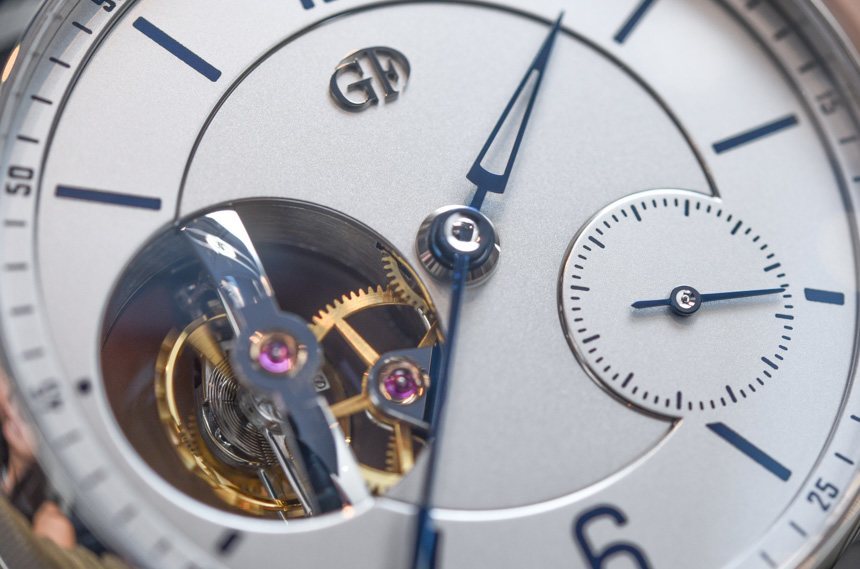 The GF01r movement is also among the more basic that Greubel Forsey produces – even though it receives no less effort when it comes to finishing and décor as their much more complicated models. Produced from a total of 288 parts, the movement has a power reserve of 72 hours and operates at 21,600 bph. In addition to the time on the dial, there is a discreet power reserve indicator on the rear of the movement seen through the caseback.

When it comes to a watch whose emphasis is simplicity and refinement, a lot of effort needs to go into the dial. Stephen Forsey explains just how complicated the dial of the Greubel Forsey Tourbillon 24 Seconds Vision is, even though it appears basic at first. The dial itself is in 18k gold and given a unique treatment to get the particular gray color. The black hour indicators are actually enameled. This means they are carefully painted and baked – a process that, in a design like that of the Greubel Forsey Tourbillon 24 Seconds Vision’s dial, requires many individuals steps. You also have the distinctive hands – which are new for the brand – which are both individually hand-polished and flame-blued steel. 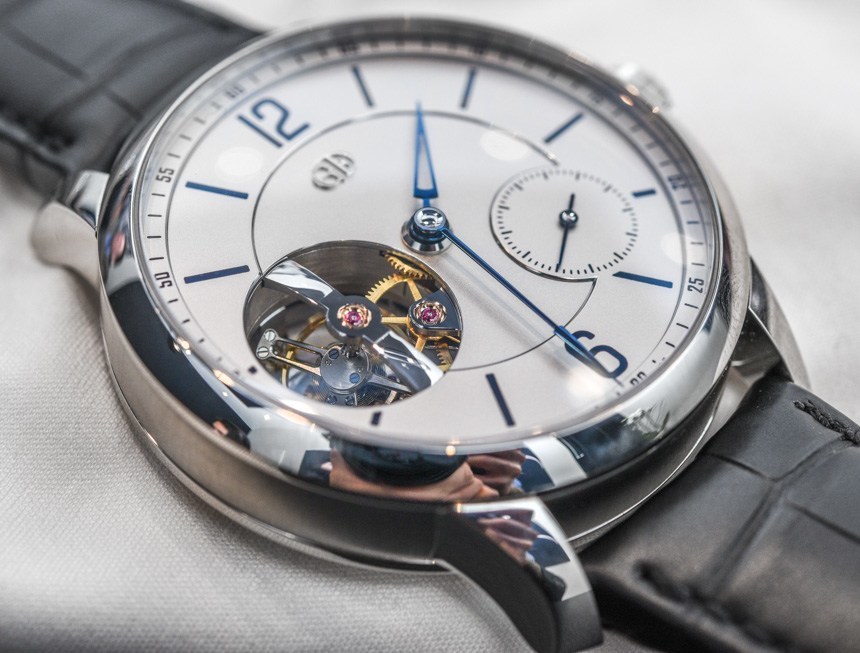 On the hand-sewn black alligator strap, the Greubel Forsey Tourbillon 24 Secondes Vision watch is the most comfortable and arguably classy Greubel Forsey watch to date. I wouldn’t call it the purest Greubel Forsey experience, given that it doesn’t encapsulate the fuller design aesthetic and complication experience of the brand, but it does offer existing collectors a new way of wearing the brand all the time in a remarkably elegant package. 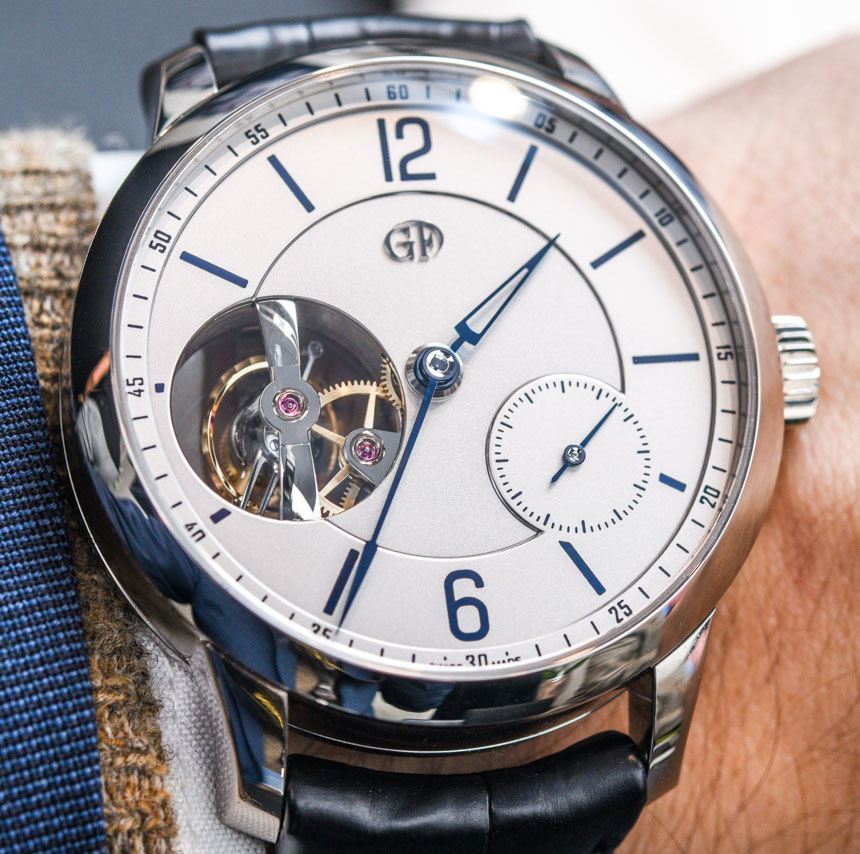 For 2015, one limited edition version of the Greubel Forsey Tourbillon 24 Seconds Vision watch is available in 18k white gold in a set of 22 pieces. If we know anything about Greubel Forsey, future limited edition versions of the Vision will come in other case materials and dial colors. I am looking forward to an 18k red gold version with a black dial – which I have a feeling we might see down the line at some point. Price for the Tourbillon Vision in white gold is €290,000 or around $325,000. greubelforsey.com