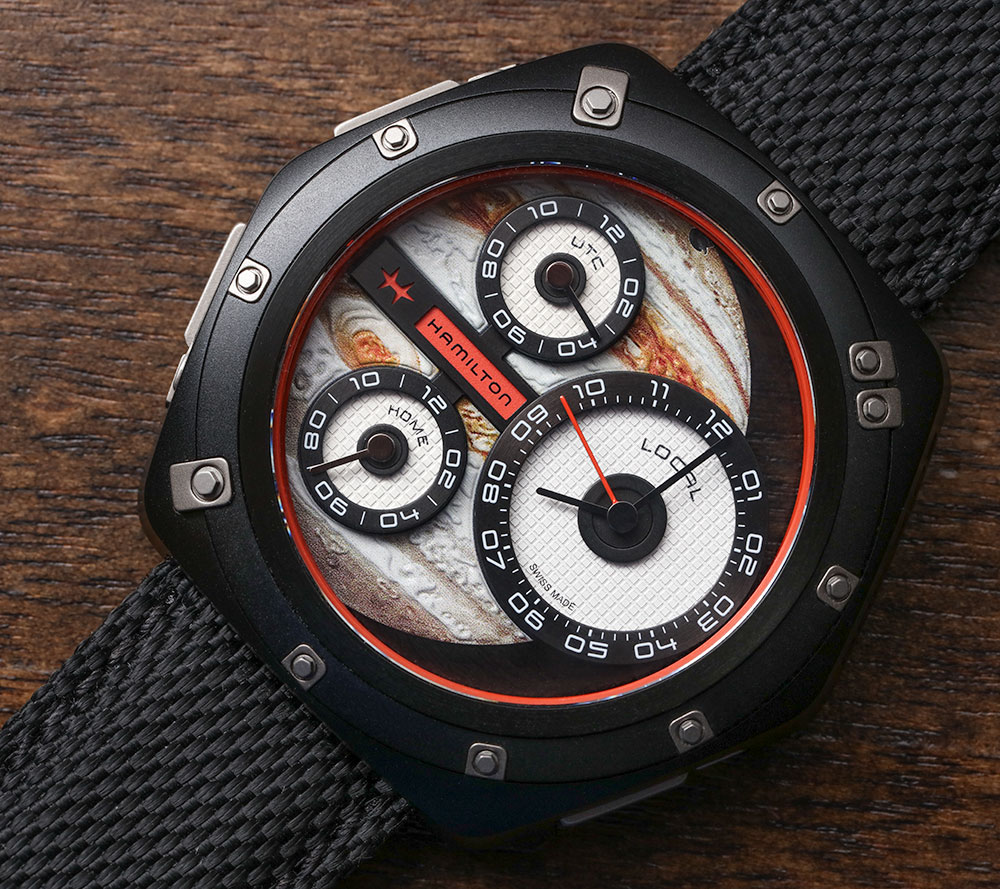 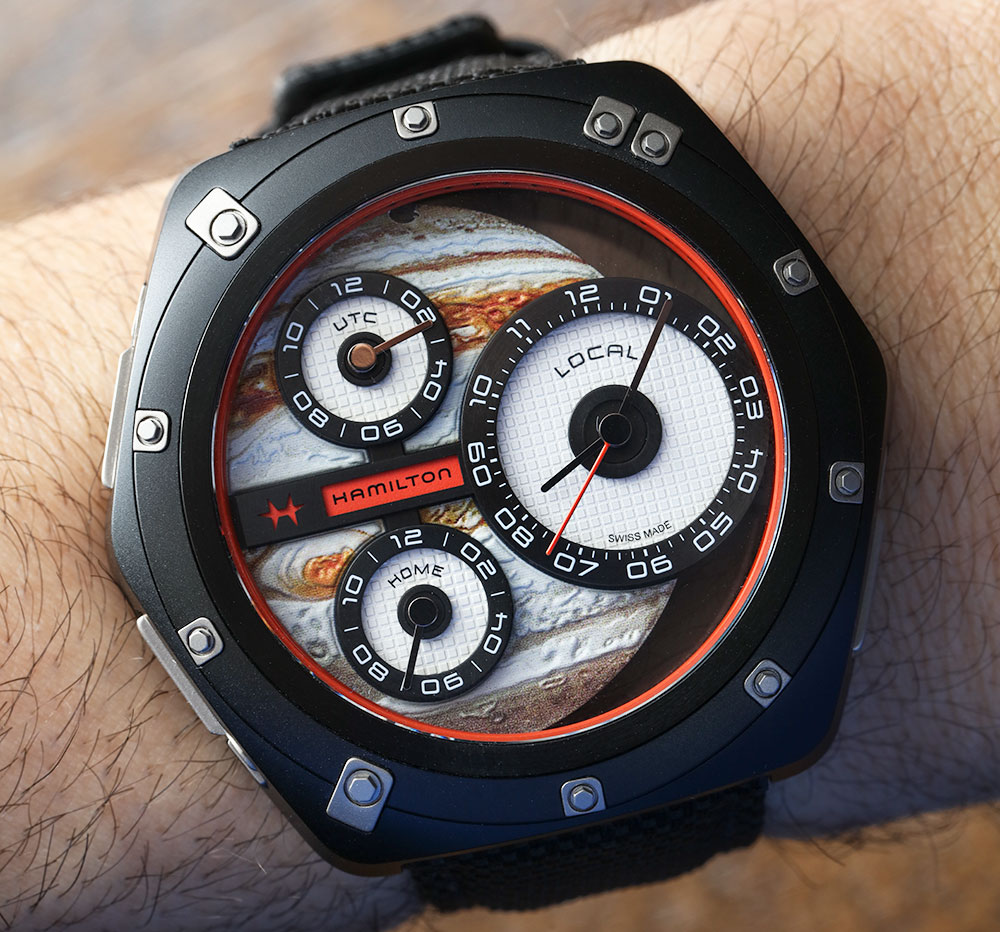 The Hamilton ODC X-03 watch, inspired by the big screen and Hamilton’s past involvements in movies such as 2001: A Space Odyssey and Interstellar is one of the funkiest offerings from a brand that has shown impressive range, from a vintage reissue (like the Intramatic 68) to sci-fi, like this piece, without effort. Designed by Nathan Crowley, the production designer for Interstellar, the Hamilton ODC X-03 is a fun and futuristic piece for watch lovers who want their timepieces to go beyond the moon. In this case, that would be Jupiter, which is featured on the dial. 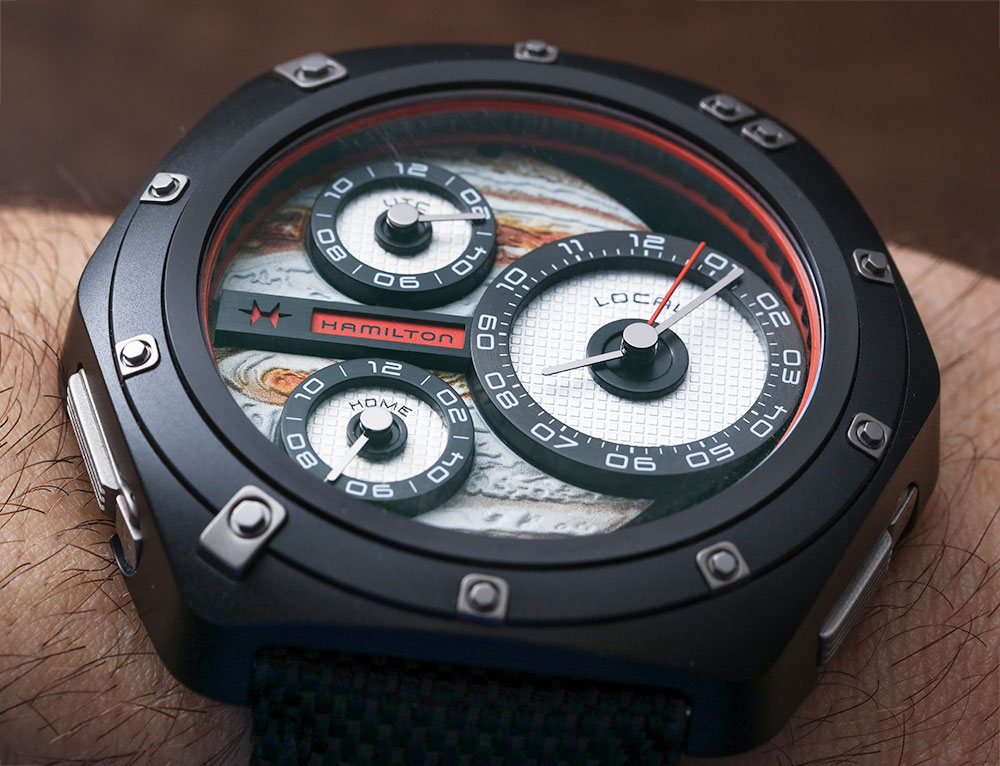 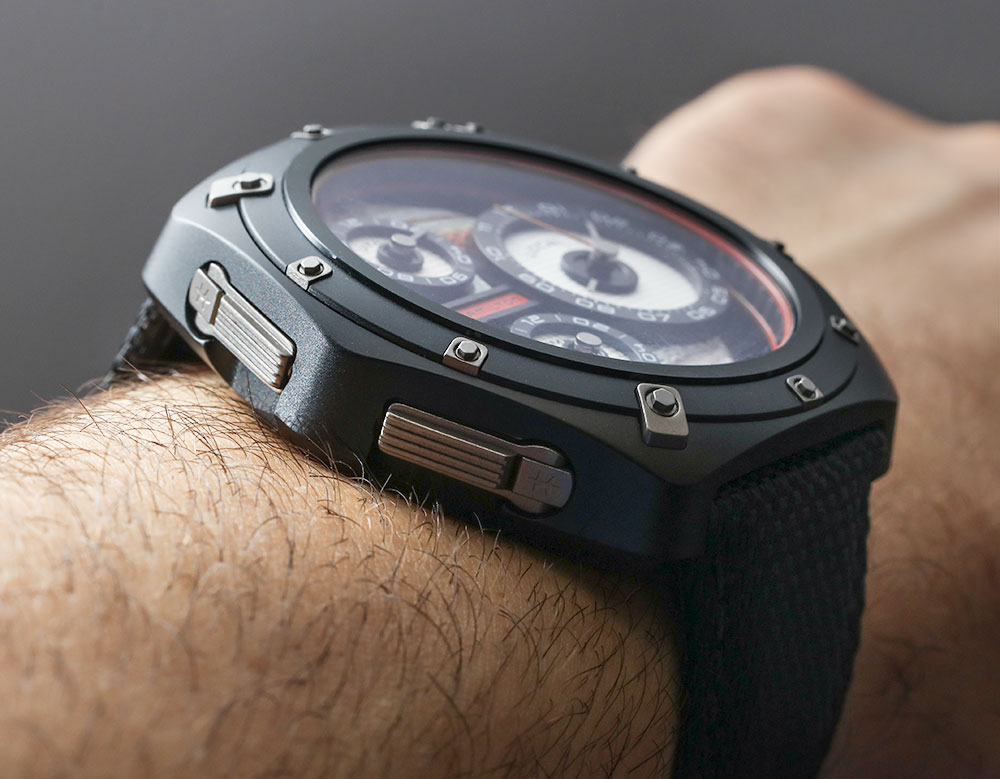 The ODC X-03, is not the first space-inspired three time-zone watch from Hamilton. It joins the ranks of the ODC X-02 and the ODC X-01. The first thing you notice about the ODC X-03 is its proportions. With a 49 x 52mm hexagonal case, this is a big watch, and to help keep weight down, the case is titanium with black PVD. The use of titanium is also fitting with the space theme . You’ll notice that the upper bezel is held in place by a set of asymmetrical rivets – there is something about space themed movies and asymmetrical patterns in the props and they seem to be everywhere. While the rivets may be asymmetrical, they haven’t been placed thoughtlessly. Your eyes are immediately drawn to the top right of the case by two large rivets as this is the side closest to the ‘Local’ time indicator. There is a similarly sized large rivet to the top left and bottom left of the watch that subtly lead the eye to the ‘UTC’ and ‘Home’ time indicators. Seven smaller rivets are spaced around these three. 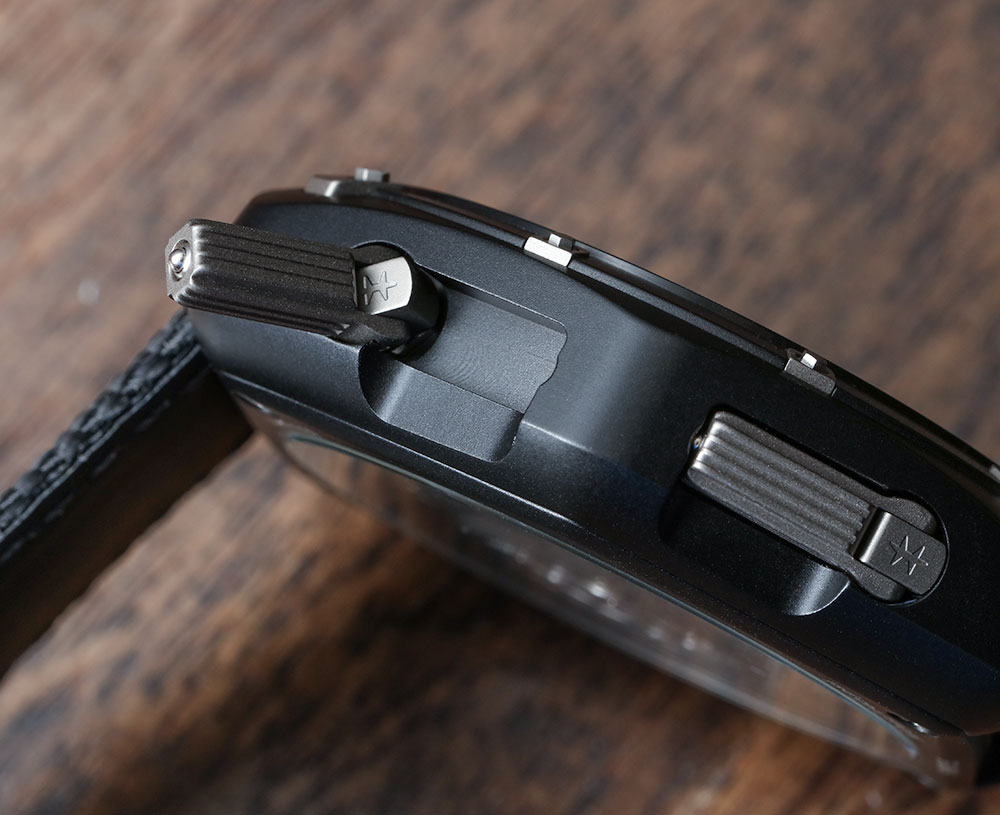 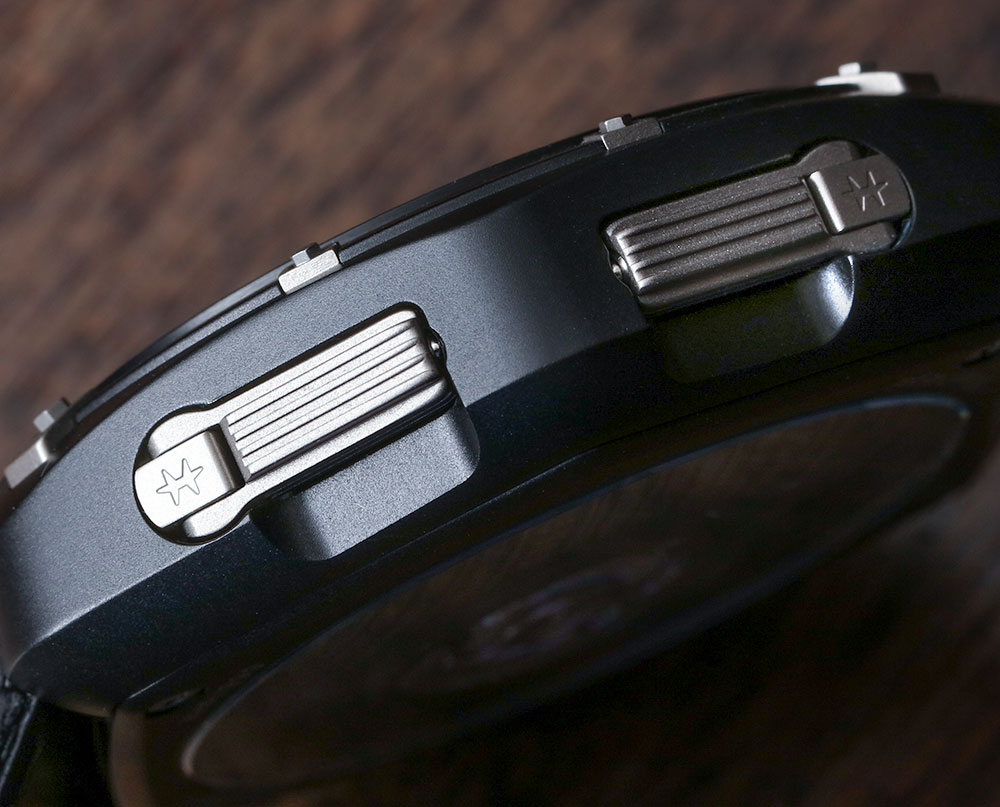 You might have already noticed the lack of an obvious crown and no, this watch doesn’t require you to carry a separate winding key everywhere. It does have a crown, or rather three crowns – one for each time indicator. These are designed to be long, thin and pole-like and fold away into the side of the case. Given the already large proportions of the watch, it makes sense that the designer did not want to add three, large, protruding crowns. That would’ve been quite the eyesore and and would make the watch look the size of a hockey puck. The folding mechanism is a clever solution and the shape of the crown gives it plenty of grip and makes it quite ergonomic in use. 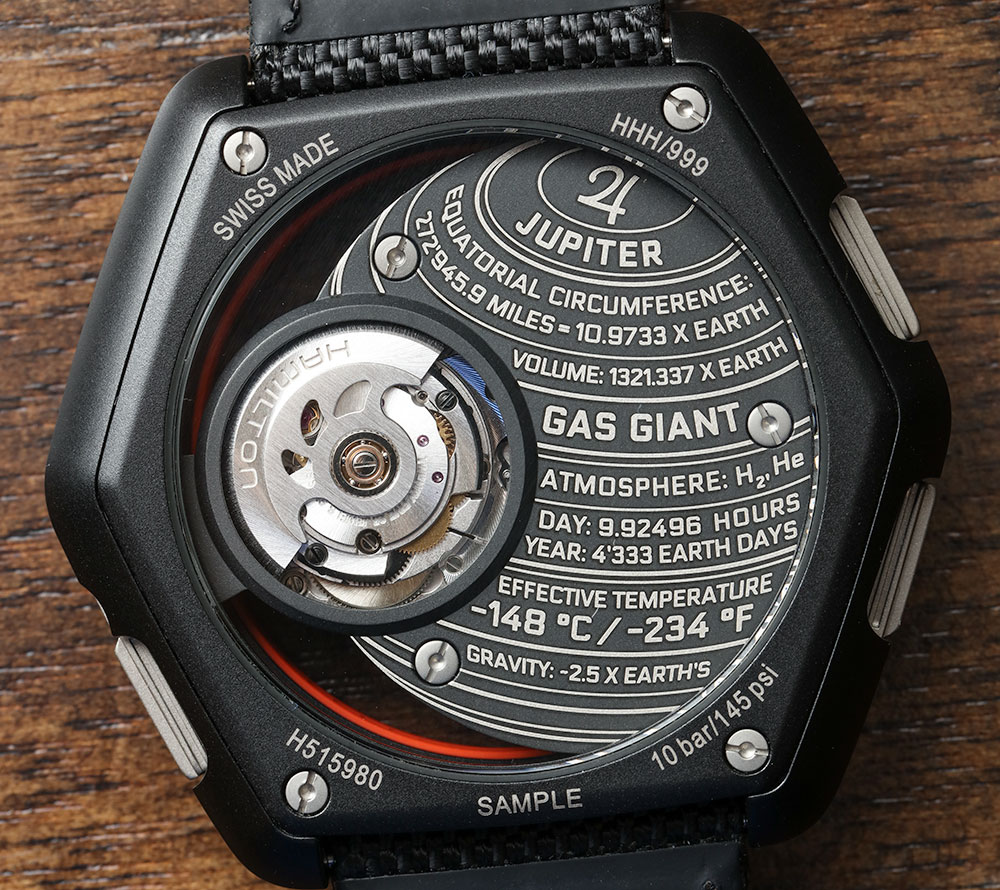 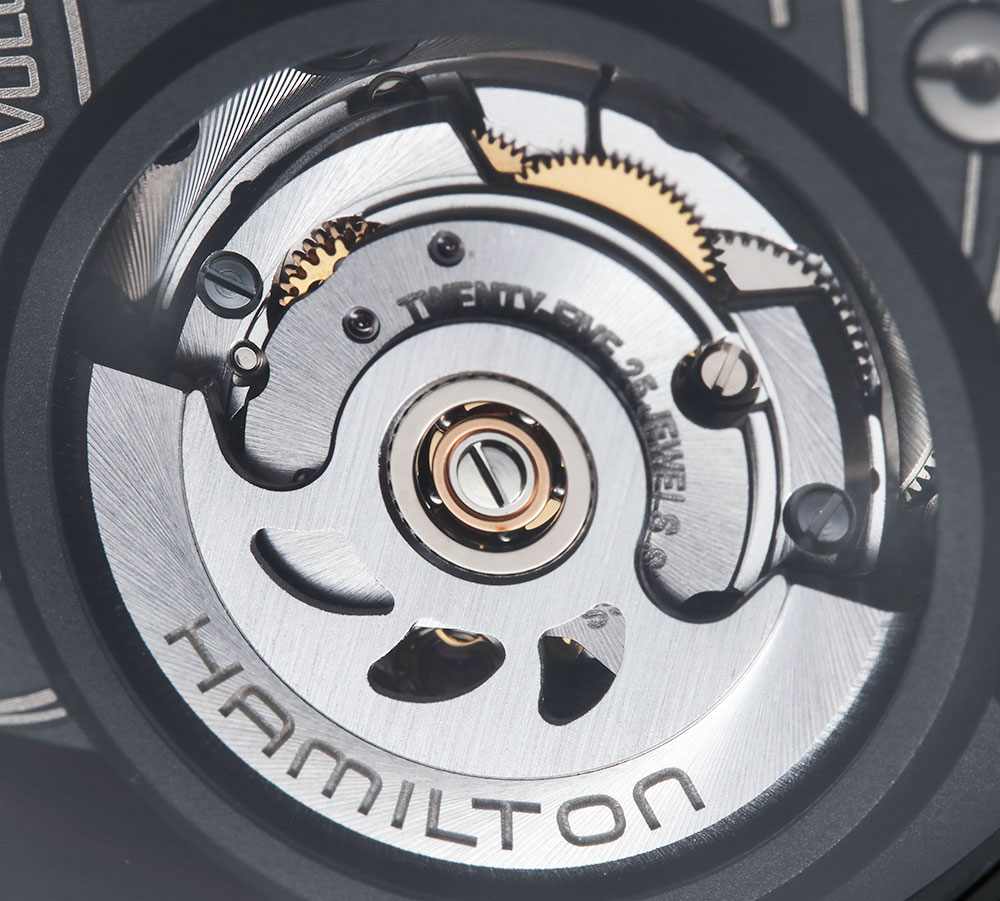 The clever design and use of materials isn’t restricted to the case alone. As I mentioned earlier, the Hamilton ODC X-03 displays time across three time zones. Each time zone has a sub-dial and is powered by its own movement. The Local time indicator which is the biggest of the three is powered by an ETA 2671 movement. An uncommon automatic movement generally used in ladies watches, it’s smaller diameter of 17.2mm made it an ideal candidate in this case. It has all the necessary hallmarks of a modern, robust movement – hacking, 38 hour power reserve, and a 28,800bph rate. The movement is visible through a display back, but the decoration has been kept to a minimum, and by that I mean the rotor is engraved with the brand name and that’s all. 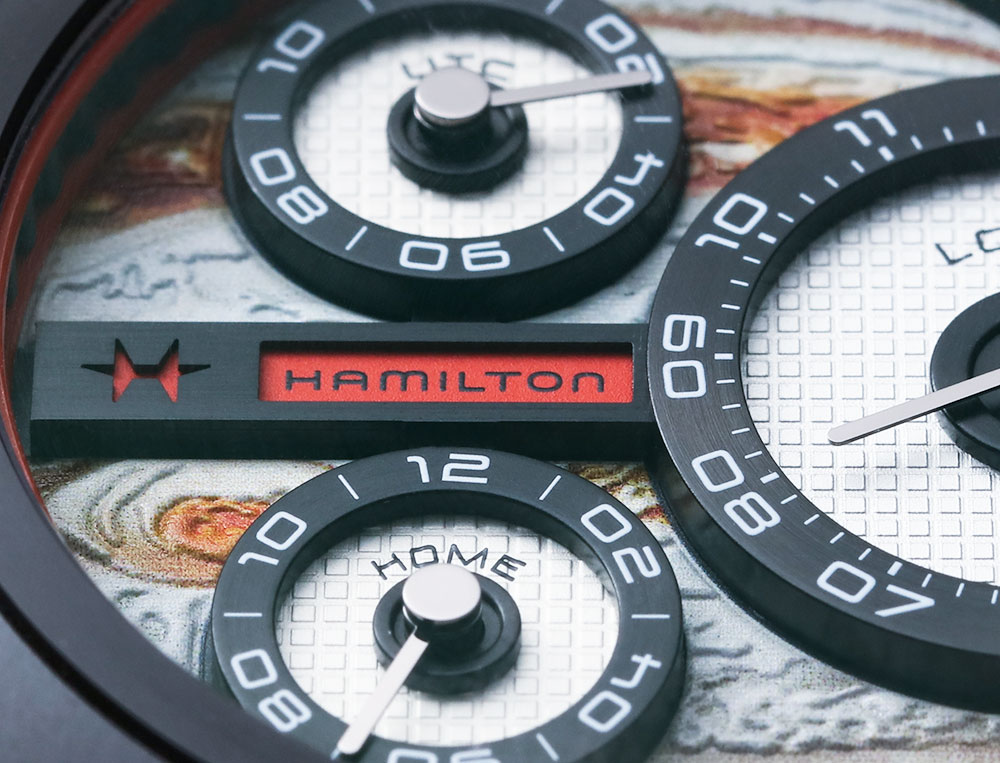 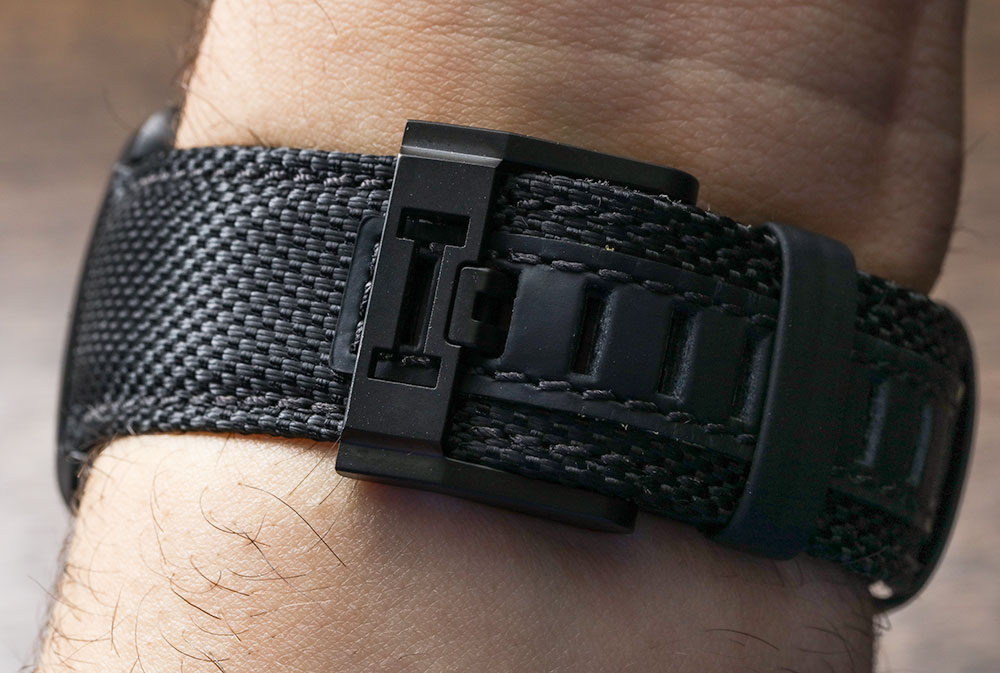 The UTC and Home time indicators are powered by ETA901.001 quartz movements. To the best of my knowledge, there isn’t a mass produced, easy available mechanical movement that is small enough to fit the requirements here, so it makes sense that Hamilton opted for the quartz route. And, if it matters, there is no ticking seconds hand as both indicators only have hour hands. Unless someone knew their watches well, it’d be hard to guess quartz immediately. At this point, some of you may ask why Hamilton didn’t try and find or build a module for an ETA2824 base that could display three time zones. The short answer is that even if it were possible, it would be prohibitively expensive and make little practical sense. 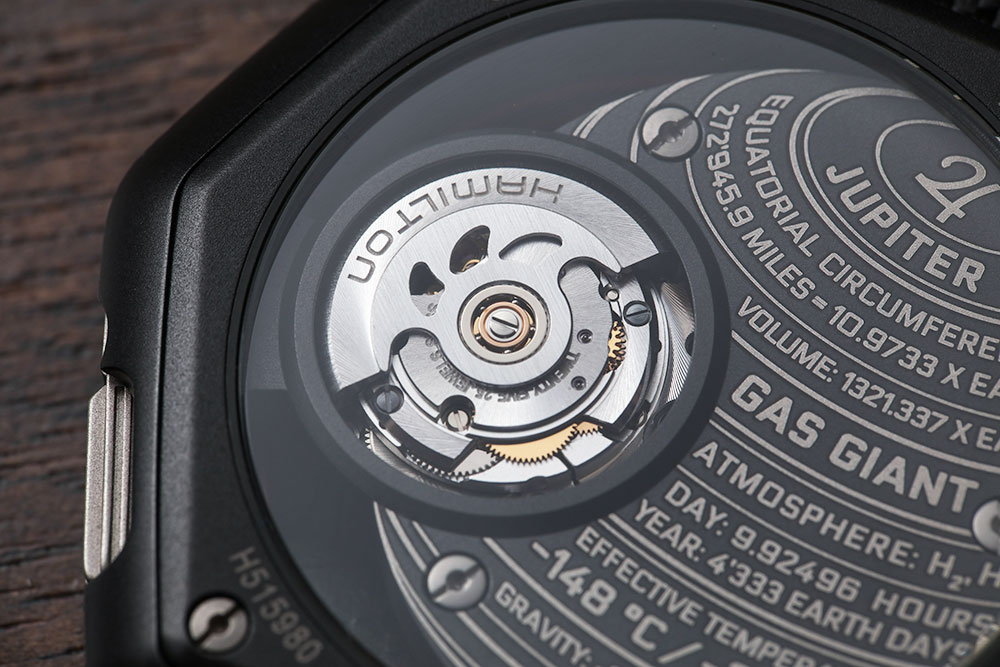 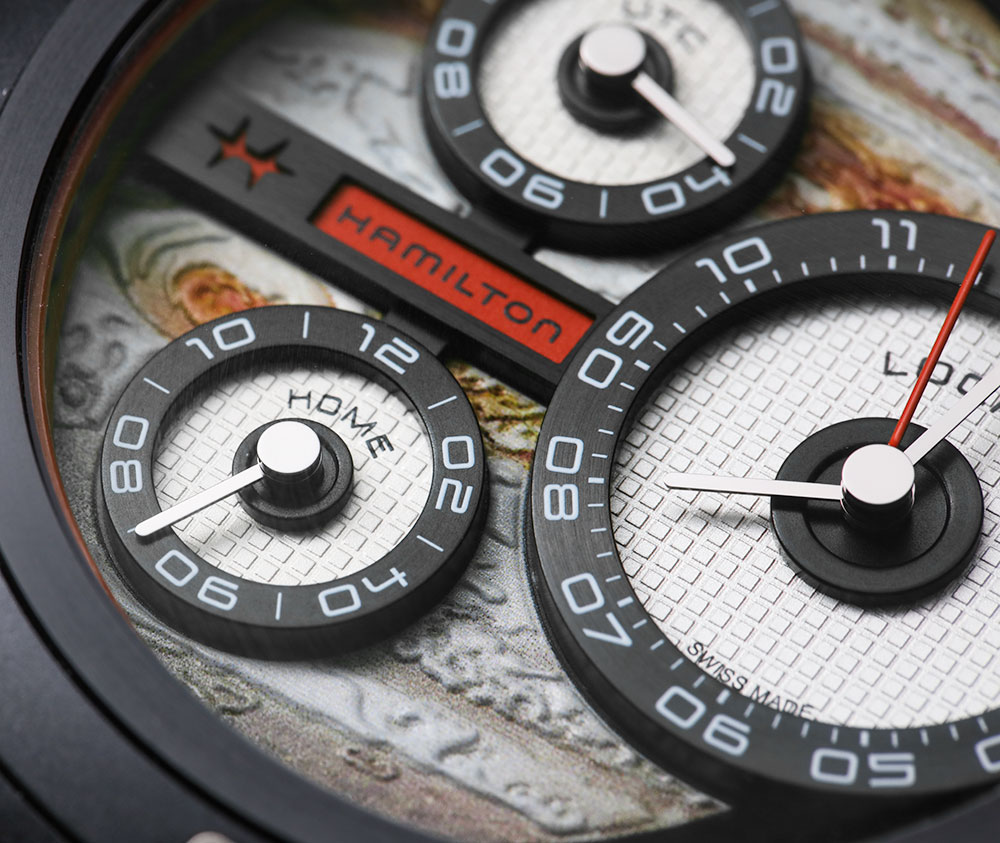 The dial layout is meant to be reminiscent of the Endurance spaceship from Interstellar and you will have already noticed the layout of the dial and how the three time indicators are set against a planet for a backdrop. Those of you up to date on your planets (or those paying attention earlier in the article) will recognize the planet on the dial as Jupiter, the largest planet in our solar system. Given the large proportions of this watch, it feels right that Jupiter is the planet they picked to display. The disk is 3D printed and only partially covers the aperture, like an eclipse. On the back of the disk is plenty of text providing factoids about the planet. 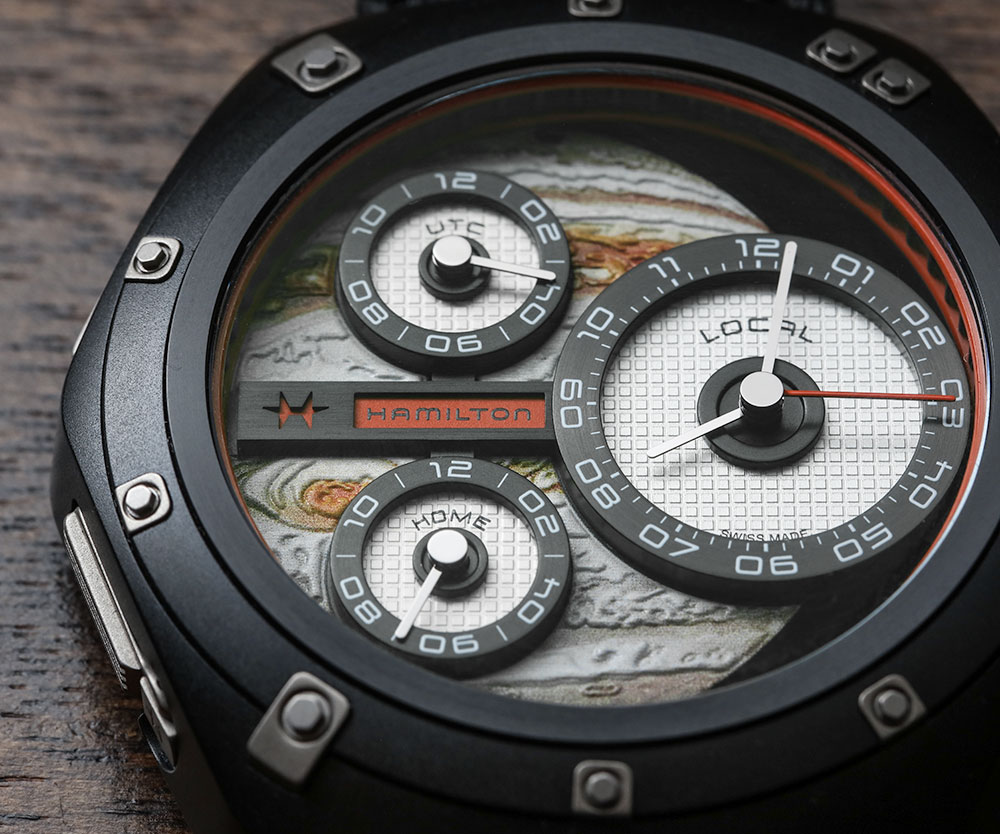 The dial is all about high contrast, with the actual time displays having white dials with a waffle guilloché pattern and black baton hands. Each display is bordered by a black chapter ring with hour markers printed in white and the words ‘Local,’ ‘UTC,’ and ‘Home’ clearly identifying the respective dials. The orange needle hand, orange rectangle with ‘Hamilton’ printed in black, and orange highlight ring around the entire dial offers some visual pop to the whole thing. It also complements the color scheme of Jupiter quite well. 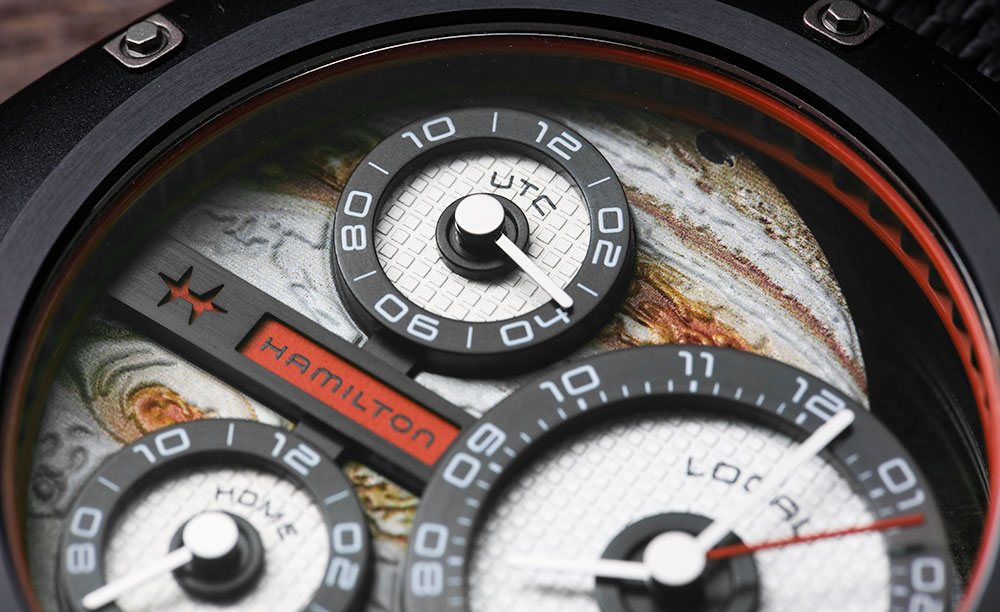 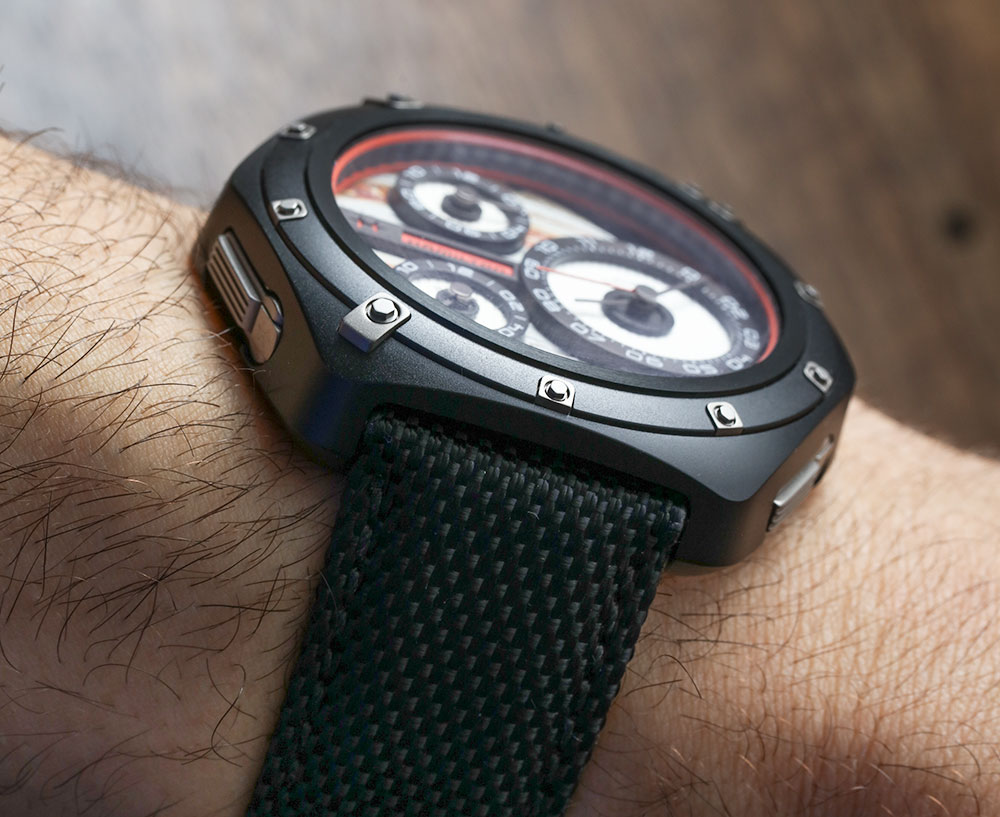 The Hamilton ODC X-03 is quirky and fun for the grown-up sci-fi fan, but also manages to keep from being too goofy or obscure. With a 100m water resistance rating, titanium case, and orange/black color scheme it has the makings of a sport watch but it clearly is not one. Given the brand’s well-known line of field watches, I like to imagine that this is what a field watch on Jupiter might look like. The ODC X-03 has a lot to offer, especially if you’re a fan of space themed movies, or Interstellar in particular. The Hamilton ODC X-03 is produced in a limited run of 999 pieces and is available on a black textile strap online and at retailers for $3,500. hamiltonwatch.com