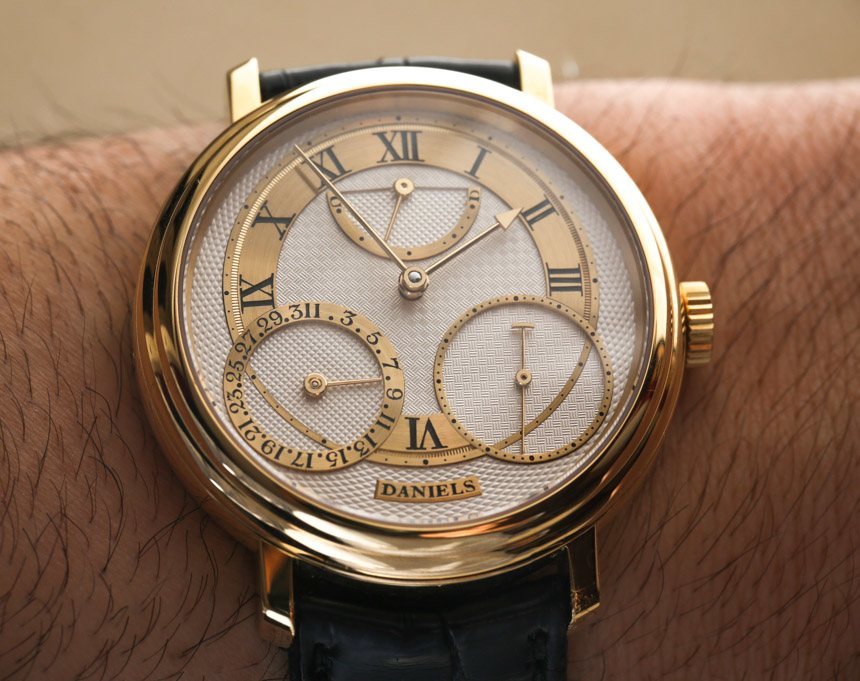 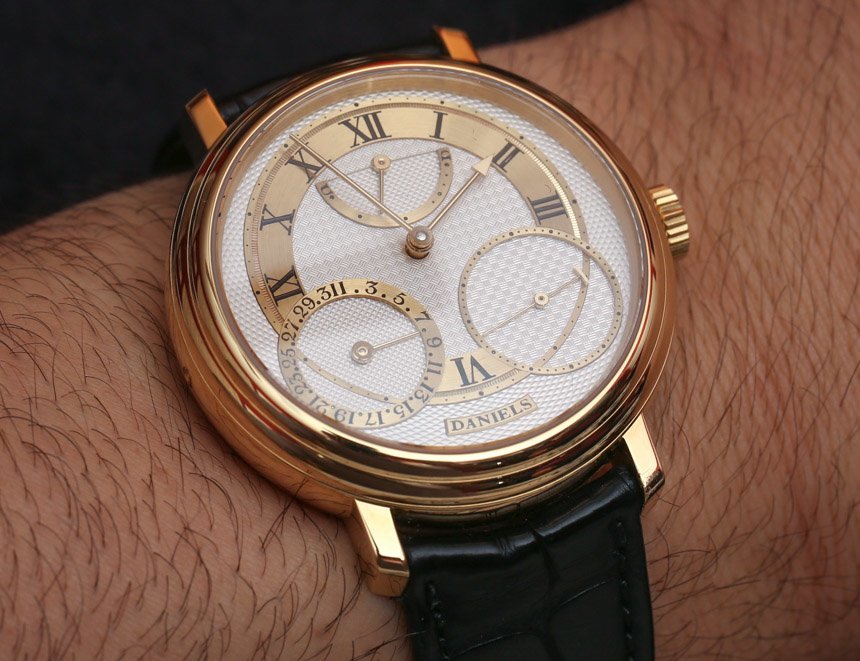 The very last watch ever created to bear the Daniels name. This is what we are looking at today, as we had the chance to go hands-on with this beautiful and genuinely important watch, designed by George Daniels and Roger Smith, and crafted in a limited edition of 35 pieces by the latter. The name of George Daniels will be familiar to most watch enthusiasts, but for those learning about him for the first time, let me begin with a brief introduction.

“George Daniels (1926-2011) is regarded as one of the greatest watchmakers of all time and his work has its deserved place in watchmaking history amongst the finest and most influential. One of his greatest accomplishments is known by millions around the world thanks to Omega, who feature his co-axial escapement in most of their watches (which they bought from him at a rather meager sum).” These are the words I started my article about George Daniels’ momentous publication, humbly titled Watchmaking (read about it here). You may learn more about his work in that post, so for now, let us move on to discussing this “watchmaker’s watch.” 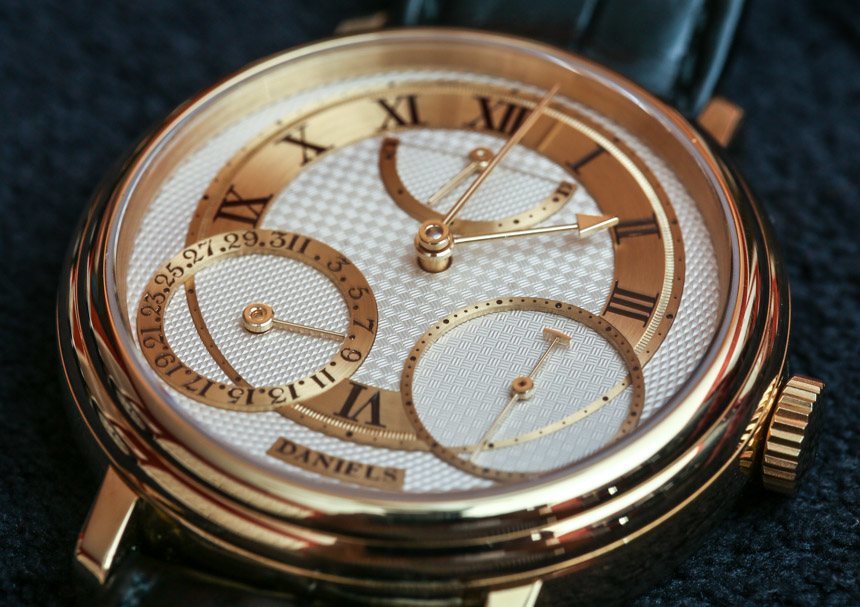 In his lifetime, George Daniels created a total of 23 pocket watches and 4 wrist watches – along with a series of over 50 “Millennium Watches,” which, like this Anniversary series, were also mostly produced by Roger Smith. That still is an extremely, extremely limited production run for a lifetime’s worth of work. Admittedly, Daniels’ approach was to always try and create something very new that challenged him greatly, as opposed to create iterations of a previous achievement – which is one of the primary reasons for that very limited amount of watches that produced.

Despite minuscule production figures, the work of George Daniels can be recognized from miles away – the only thing that comes close is, of course, the work of Roger Smith, who had worked with Daniels since the late 1990s. As such, the Anniversary Watch is quintessentially Daniels; in fact, it was Daniels who approached Smith to create a commemorative series of just 35 watches, marking the 35th anniversary of his inventing the co-axial escapement, a remarkable new escapement design today found in just about all Omega mechanical watches. In 2010, after the two had collaborated on prototypes, the George Daniels 35th Anniversary Watch was announced – a series of watches Daniels unfortunately did not live to see completed.

In essence, the George Daniels 35th Anniversary Watch made for a wonderful and pristine way of carrying on his heritage, and here’s why. Staying with the front’s aesthetics for a moment longer, before turning to the movement’s technicalities, the dial is unmistakably Daniels, as the proportions, the sizes, diameters, patterns, and the layout of the different elements are all superhumanly perfect – contradicting the fact that they have all been crafted by hand, using only traditional equipment. The subtle triangular layout of the centers of the three sub-dials, the off-centered position of the main dial, the featherweight balance and lightness of the front all are trademarks of a Daniels watch – and proof of his engineering genius. 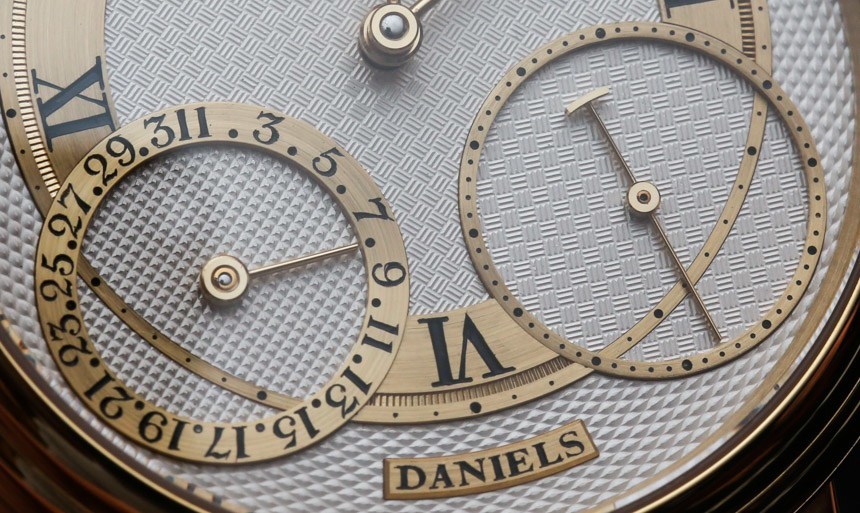 The silver dial features a variety of hand-applied guilloché patterns – a method that unquestionably results in the absolute best aesthetic qualities by lending the dial a definitive depth, a truly three-dimensional look that absorbs and reflects light in a way no stamped component could. The 18k gold chapter rings for the main dial, the sub-seconds at 4, the instantaneous date at 8, and the power reserve at 12 all feature hand-inked lettering and numerals – resulting in somewhat more blunt, albeit to fans of genuinely hand-made items, an arguably superior detail, when compared to more modern methods. 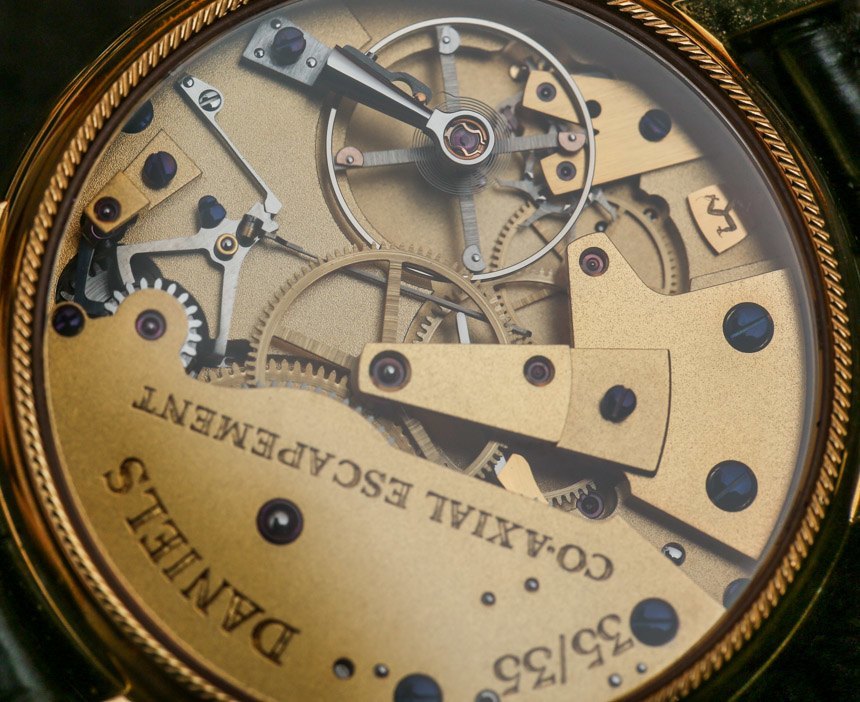 Daniels was a watchmaker – considered by many to be the first – who has mastered 32 from the 34 crafts which are required to manufacture a hand-made timepiece. Therefore, it is of no surprise that the dials, hands, indices, and the 40 millimeter wide yellow gold case all are components he could create – but what speaks louder than any of these achievements is, of course, the movement. In 1975, Daniels created the co-axial escapement, arguably the first new escapement design in over 200 years that could be commercialized – as done by Omega. 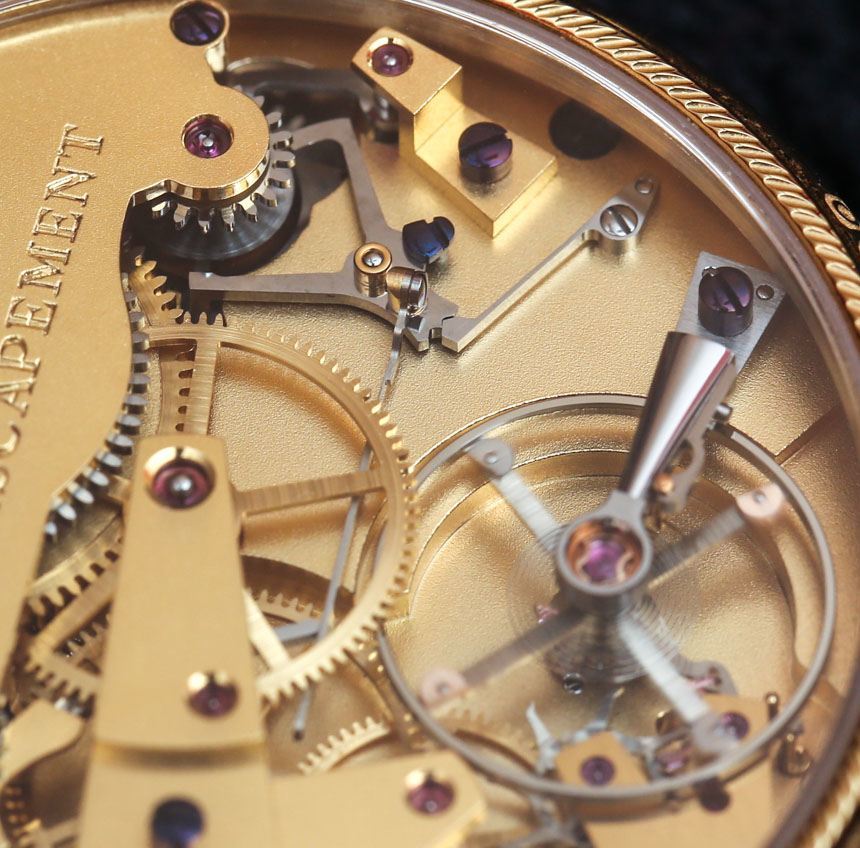 The movement in the George Daniels 35th Anniversary Watch more resembles that found in a pocket watch than a wristwatch, with its gilt nickel silver movement and large, strong bridges. The quality of finishing, while unusual in the field of modern wristwatch movements, is exceptional when one considers how even in color and gradient, the gilt is across all the plates, bridges, and surfaces. What stands out from the sea of dark gold colored bridges is the large four-arm balance wheel done in beryllium-copper with a free-sprung balance spring and adjustment screws – a system very similar to what is seen with Patek Philippe’s Gyromax balance wheel, featured in, for example, Reference 5270 (hands-on here). 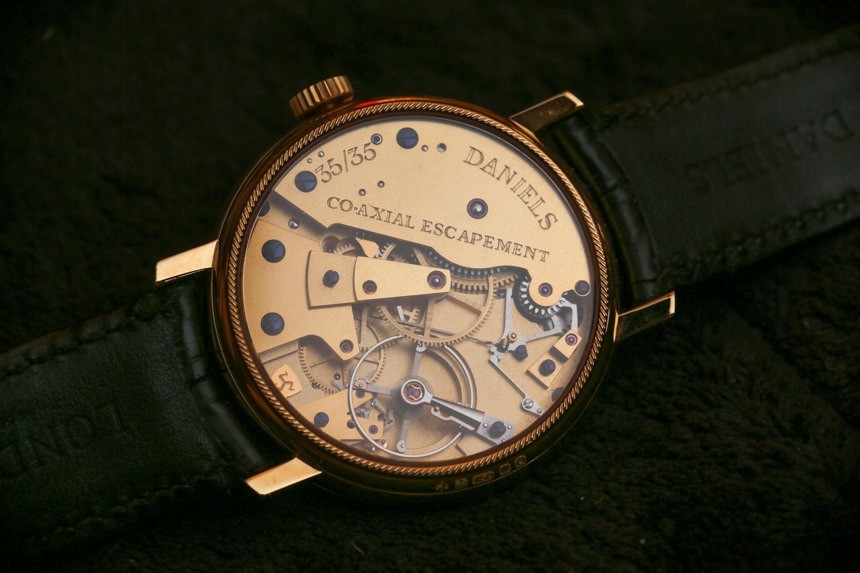 Powered by a single barrel that would likely provide over 40 hours of power reserve, the movement actually runs for a mere 36 hours after it has been fully wound, thanks to Daniels’ stop-start mechanism that disengages the mainspring after 1.5 days. The reasoning is that the last 6 or so hours of power reserve comes at a price of insufficient torque, negatively affecting timekeeping performance – a problem that concerns only the most dedicated watch manufacturers, and that even fewer make the effort to find a solution for. Thanks to the elegantly placed power reserve indicator on the dial, one can always know when the movement requires winding. 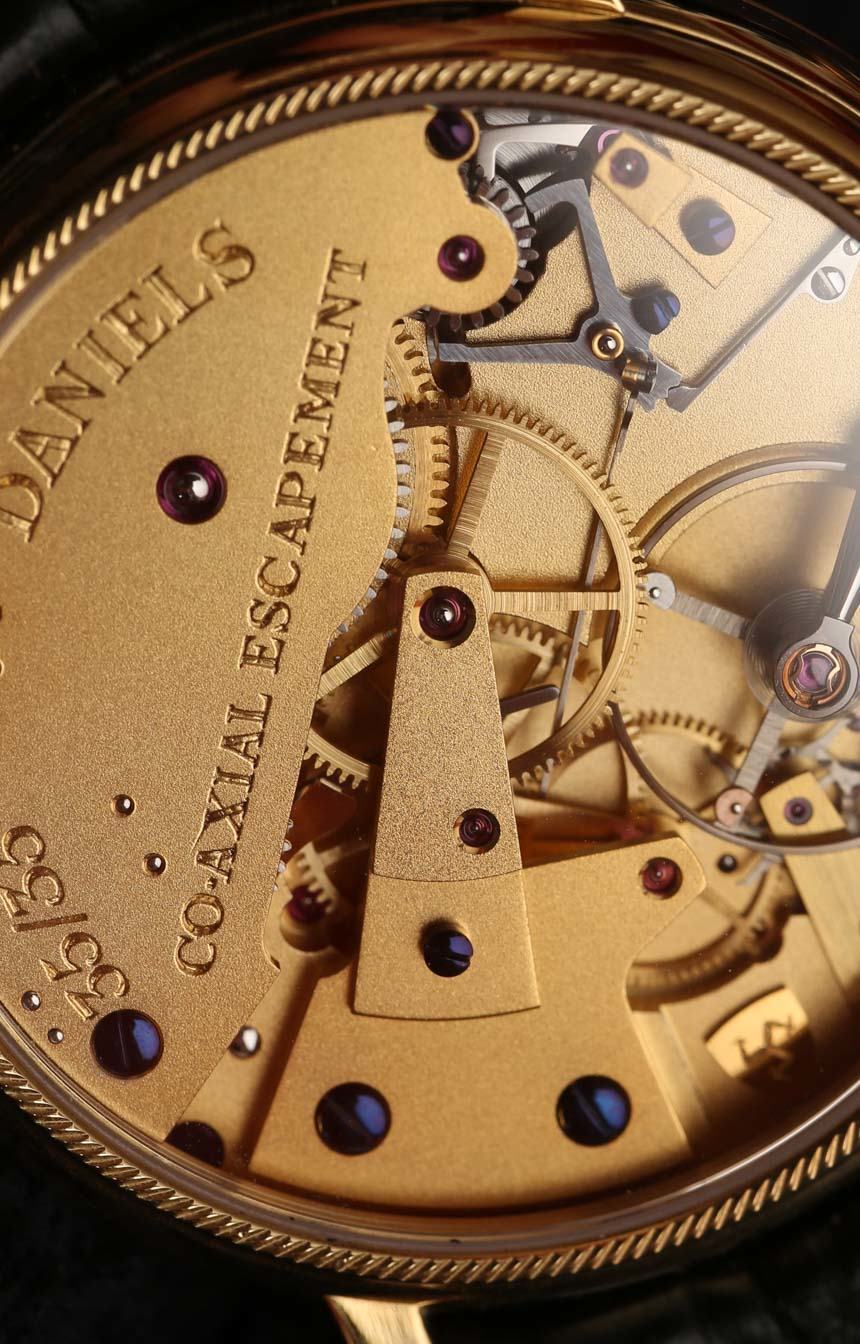 The co-axial escapement is a genuinely mind-bending invention – of the most challenging kind any and all watchmakers (independent or a major brand) face. The escapement of a mechanical movement is the collection of parts (together with the balance wheel) responsible for dividing the constant and seamless flow of time into equal periods. The lever escapement, invented and first used by Thomas Mudge in 1769, is the layout most modern mechanical watch movements are built around – for the primary reason that its relatively simple and manageable configuration allowed for its industrialization.

That statement already implies most difficulties and challenges linked to the invention of a new escapement: the new configuration will have to be extremely reliable, easy to be manufactured and assembled with extremely tight tolerances, be easily mass-produced, plus it will, of course, have to offer tangible advantages over the traditional lever escapement to be worth the hassle (and the massive investment) related to its industrialization. The co-axial escapement is ingenious because it managed to tick all these boxes – although Daniels did have to spend a significant part of his career trying to convince at least one Swiss manufacturer to take it on (which, as we know, Omega at last did). 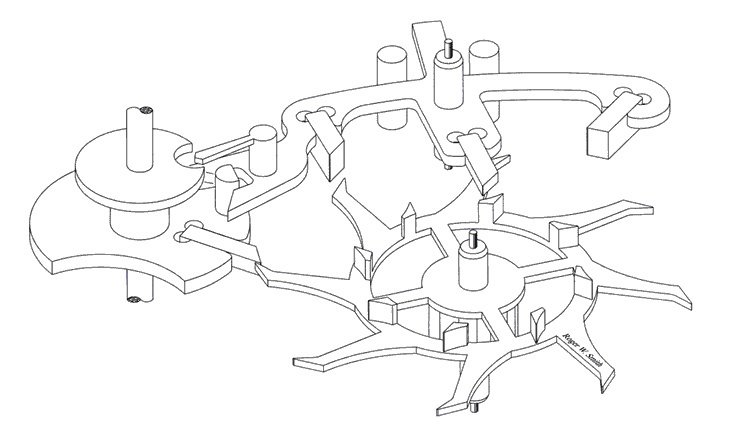 The George Daniels 35th Anniversary Watch features the co-axial escapement, although one that Roger Smith modified, so that now the co-axial parts (where the two escape-wheels which were previously located on top of one another) are crafted from the same wheel. That is the part you see in the lower right corner on the image above: the escape-wheel features the more usual “boot-shaped” teeth while also having teeth raised to function as the secondary wheel that has previously been mounted on top, “co-axially.”

We could go on and on about the refined details and advantages of the co-axial escapement, but that is for another, soon-to-come post. For now, we will just say that the fact that it is difficult to see and understand this layout – let alone the exact interaction of the teeth and pallets – even from such a simplistic image goes to show the immense mental challenge inventing something as complex and refined as this would impose. 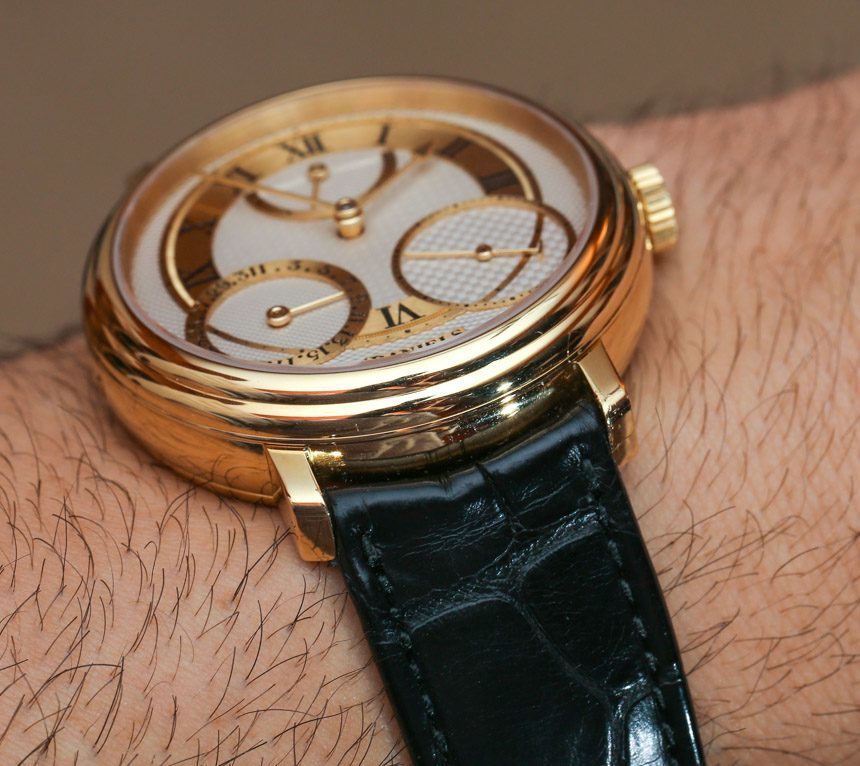 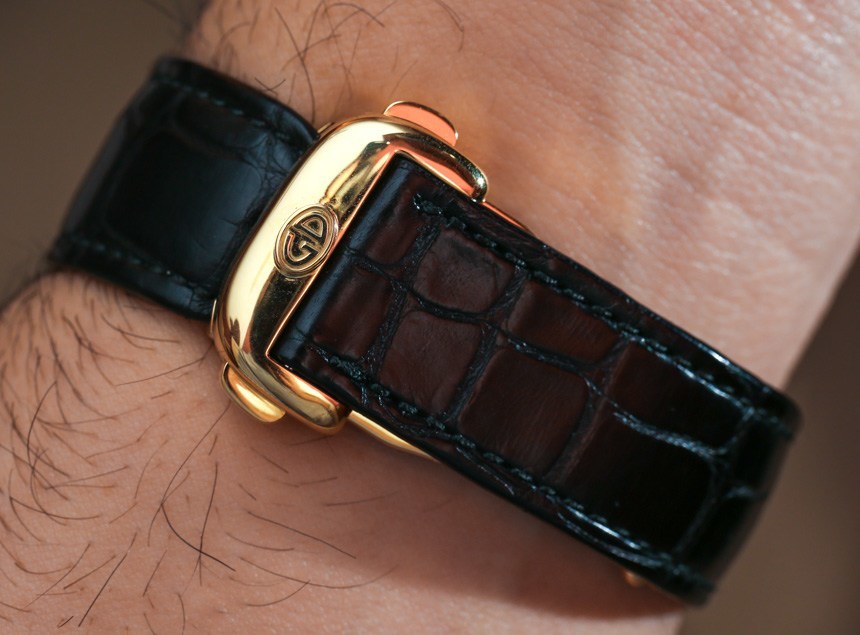 The George Daniels 35th Anniversary Watch comes in a round, 40 millimeter wide and 12.4 millimeter thick yellow gold case with a stepped bezel on the front, a “Daniels rope knurling” decorated back and a recessed push-button at the 9 o’clock position in the side, used to correct the instantaneous date display. From the inside to the outside, everything is in compliance with how Daniels deemed to be the right way of making a watch – pure, highly functional, easily legible, and timeless as a whole.

Marked 35/35, this particular George Daniels 35th Anniversary Watch – which belongs to a wonderful collection owned by Mitch K. and whom we thank for granting us the unique opportunity of seeing this piece – is the last watch ever created to bear the Daniels name, and as such, it carries a vast and extremely important heritage. Originally, the George Daniels 35th Anniversary Watches were offered for 142,000 GBP or around $220,000 – which, in the grand scheme of things, is quite reasonable when compared to the prices Daniels watches have fetched in the George Daniels auction or, when the amount and quality of work is considered; no wonder that all pieces in the series have been sold. rwsmithwatches.com