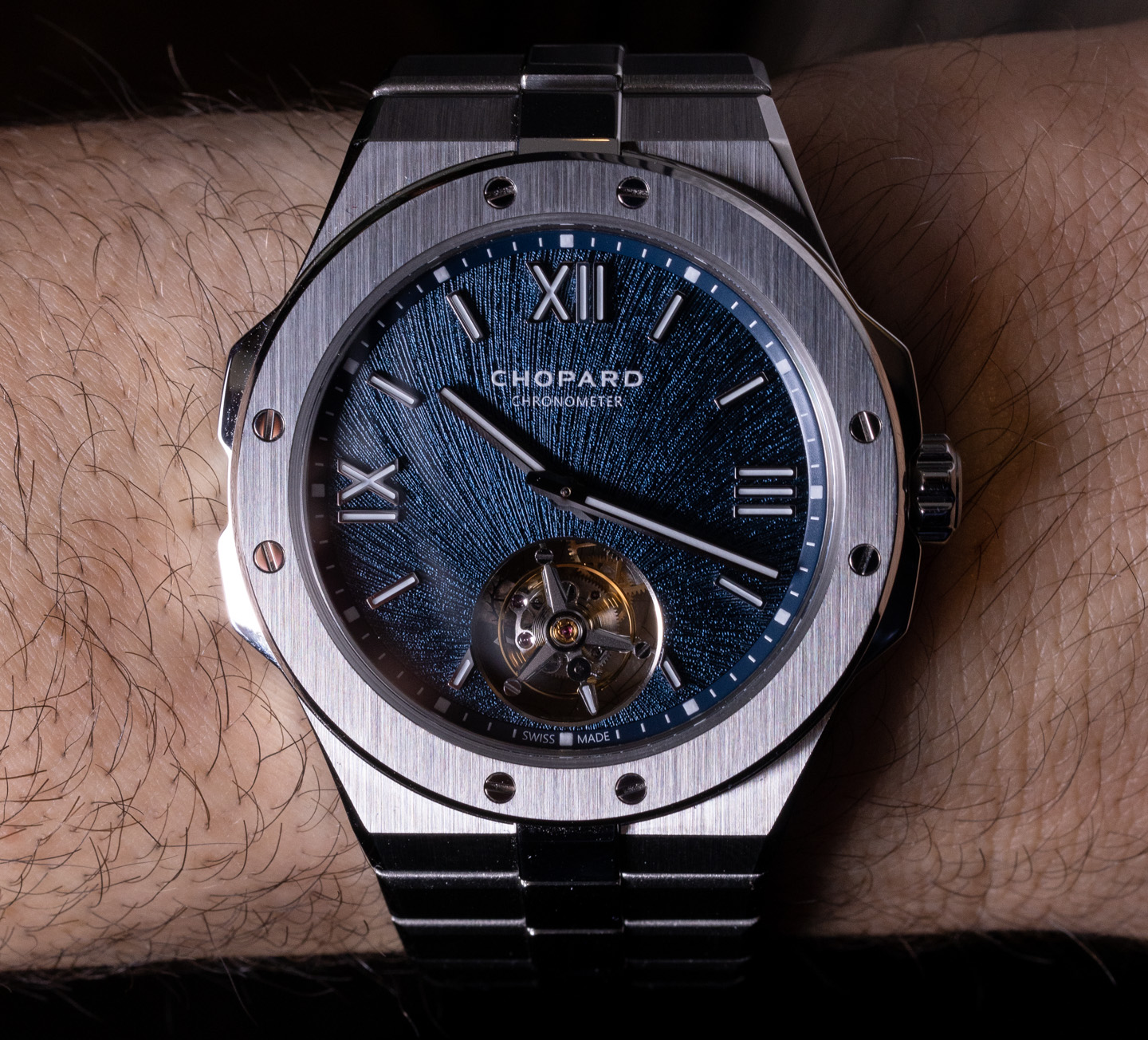 One of Chopard’s latest extensions to its still-fresh Alpine Eagle collection is the new-for-2022 Chopard Alpine Eagle Flying Tourbillon. I like this high-end timepiece because it is simple to understand, satisfying in its execution, and more than practical enough to serve as a daily wear. Indeed, Chopard celebrates the Alpine Eagle Flying Tourbillon as being among the (admittedly) rare watches that bear both the Poinçon de Genève (Seal of Geneva) as well as a COSC Chronometer certification. In a sense, the latter rating is a bit redundant, but since Chopard did seem to want to put the “Chronometer” label on the dial, the COSC certification is a nice little extra element for this accurate tourbillon-based timepiece.

While the Alpine Eagle Flying Tourbillon might not be the “most” this or the “thinnest” that, it is a very compelling package that does a lot of things well once you put it on your wrist. For a variety of reasons, people out there want to put a tourbillon on their wrist. Perhaps it is for status or because they love the animation of the spinning regulation system, but wearing a tourbillon in an otherwise sensible leisure watch is a goal for plenty of collectors. Accordingly, that’s more or less what Chopard seemed to have in mind here (with a logical competitor for this product being the Audemars Piguet Royal Oak Tourbillon). 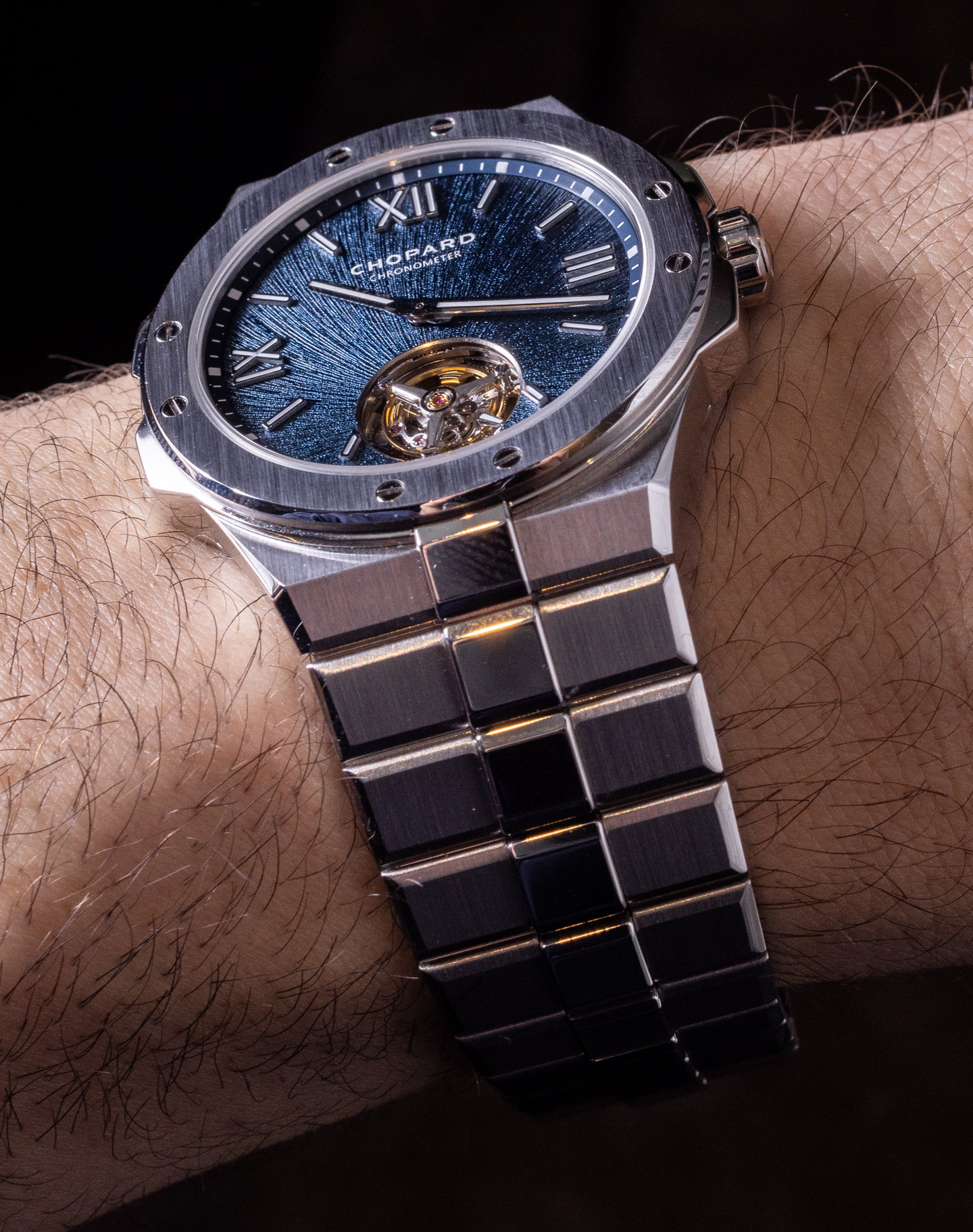 The case wears a bit small for its size and is a sensible 41mm-wide and just 8mm-thick in a special alloy of metal that Chopard calls Lucent Steel. It polishes up a bit differently from the more standard 316L steel and appears to be a bit more white in tone. I do agree that Lucent steel makes for a great watch case material. The 8mm thickness is probably enough for Chopard to have claimed that this is an “ultra-thin” timepiece, but the company usually refrains from using such boastful adjectives in its names, which is something that I tend to appreciate. The Alpine Eagle case has side flanks that give it a very trendy look, and the integrated bracelet is well-made with a unique character that easily marks it as a Chopard product (versus something from the competition). More so, the case is water-resistant to 100 meters.

The textured blue dial is produced from a piece of gold that is given a spiraled texture that Chopard calls “the iris of the eagle.” The gold base is later treated with a blue galvanic treatment to achieve the desired color. It also feels like this is a tourbillon watch meant to go with jeans, and there is certainly nothing wrong with that. The dial is also fitted with Roman numeral hour indicators and an opening for the flying tourbillon window at the 6 o’clock position No extra clutter, no extra complications, just the legible time with a textured dial and a Swiss Made rotating tourbillon system. 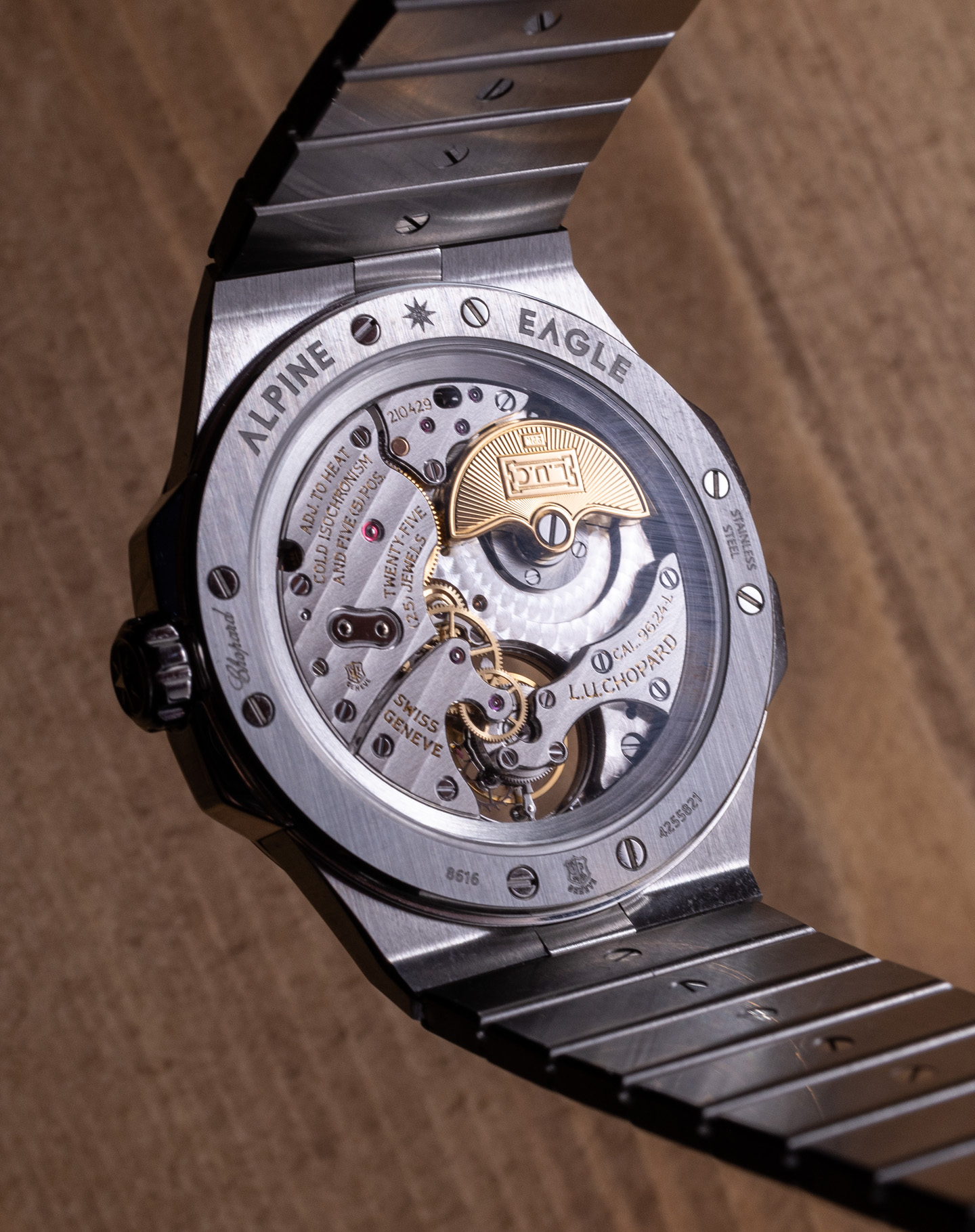 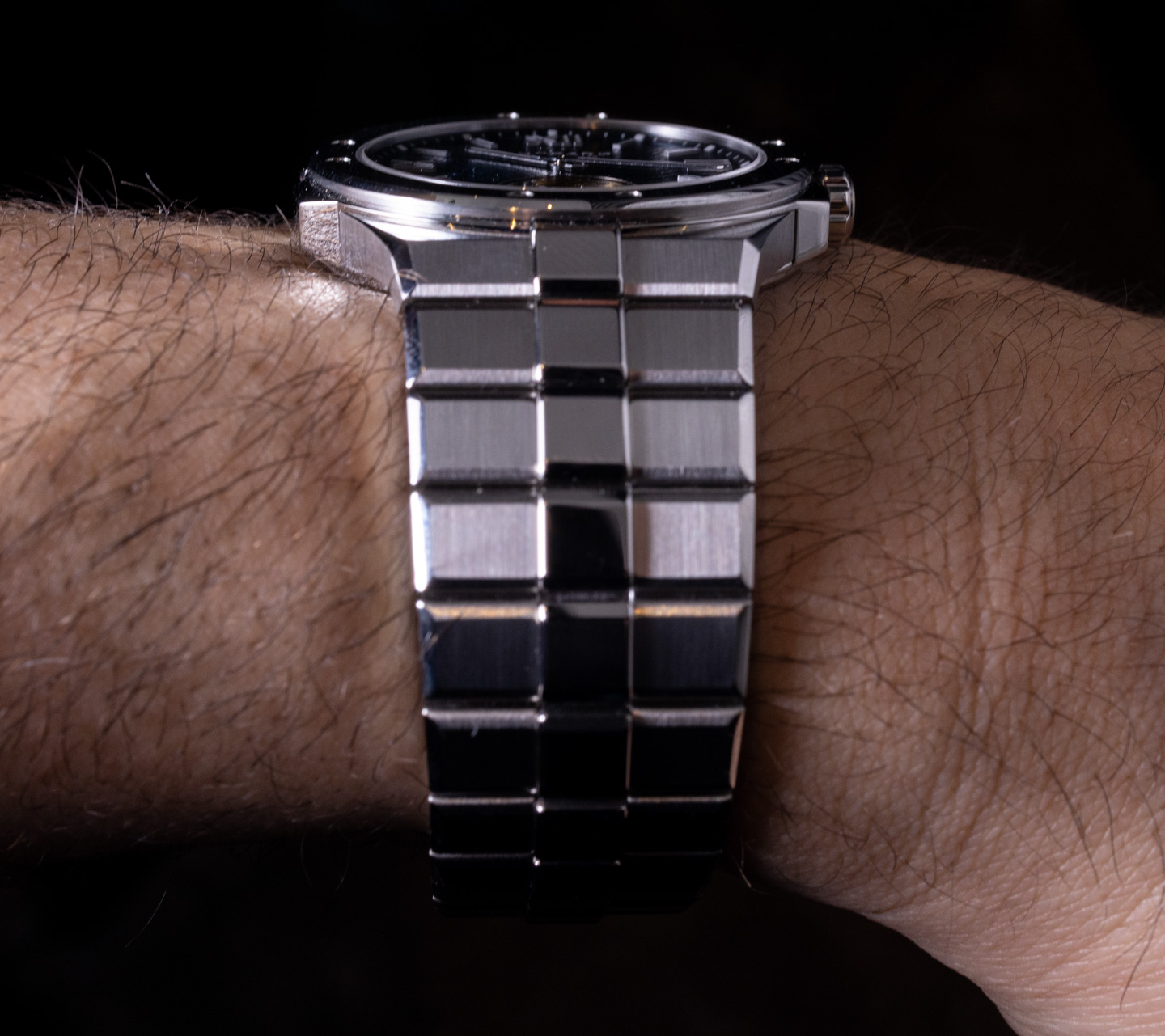 While The Alpine Eagle is not technically part of Chopard’s more elite L.U.C product collection, it does have a movement produced by the L.U.C part of the brand’s movement manufacture, which is visible through the sapphire crystal case rear. The movement is produced in-house at Chopard and is known as the caliber L.U.C 96.24-L. The movement consists of 189 parts and operates at an uncommon 3.5Hz (25,200) frequency. It has 65 hours of power reserve between two stacked mainspring barrels, which is really impressive given that the movement is just 3.3mm-thick. Finally, the movement is an automatic, featuring a 22k-gold micro-rotor system. This L.U.C family mechanism also happens to be very pretty, with its traditional bridge architecture and corresponding hand-applied polishing and decoration.

The addition of the two certifications helps prove the merits of the movements to those who don’t have the eyes to see it otherwise. COSC Chronometer certification is about attending a level of accuracy for the movement, and the more challenging and uncommon Seal of Geneva certification covers three areas. First, it attests to the fact that the movement was produced within the geographic canton of Geneva. Second and third, it attests to the cased watch meeting certain performance standards and ensuring particular aesthetic and decorative standards. There are very few (if any) “cheap” Poinçon de Genève timepieces out there. 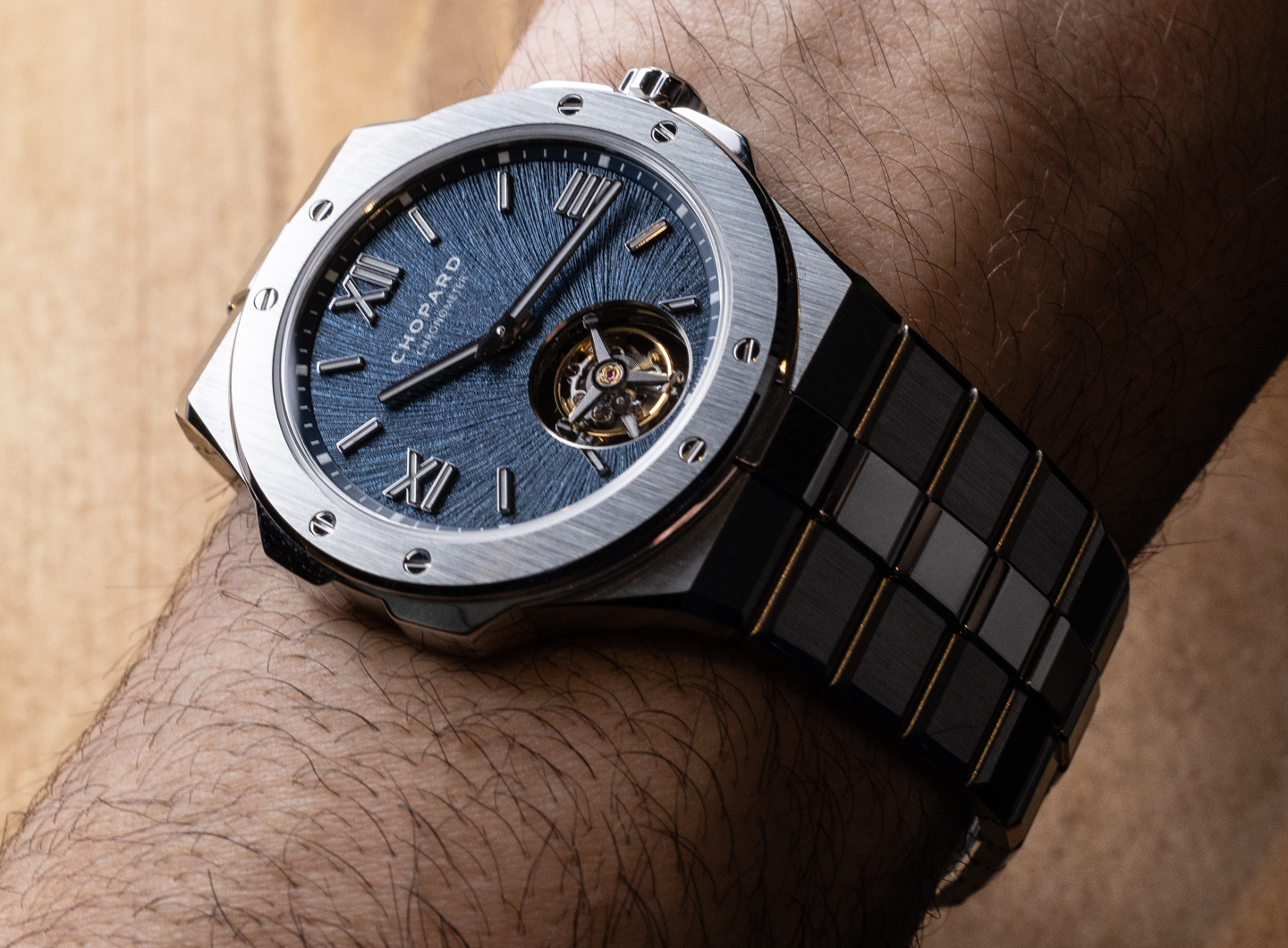 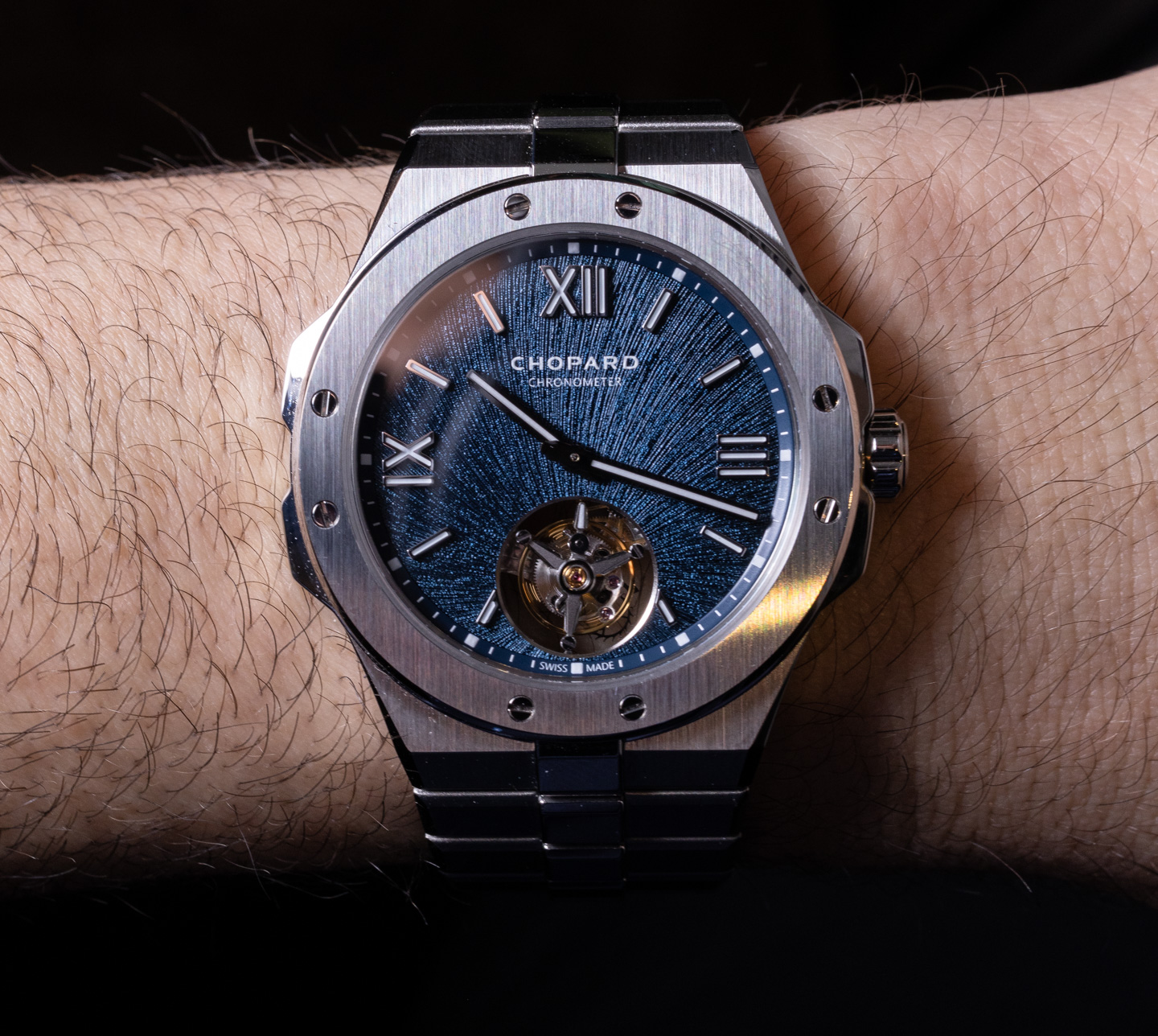 If you are in the market for a casual-wear no-frills luxury timepiece that is at least somewhat distinctive from the norm, then the Chopard Alpine Eagle Flying Tourbillon is probably one of the relatively few products on your list. Chopard is a good company, so the products are reliable, and these watches don’t yet have such intense consumer demand that you can’t get them in the retail market. Yet Chopard offers a really competitive list of tech specs, materials, and design, along with often really fair prices that make products like this Alpine Eagle reference 298616-3001 an ideal choice for a host of buyers. Price for the Chopard Alpine Eagle Flying Tourbillon as seen in Lucent steel is $112,000 USD. Learn more at the Chopard website here.