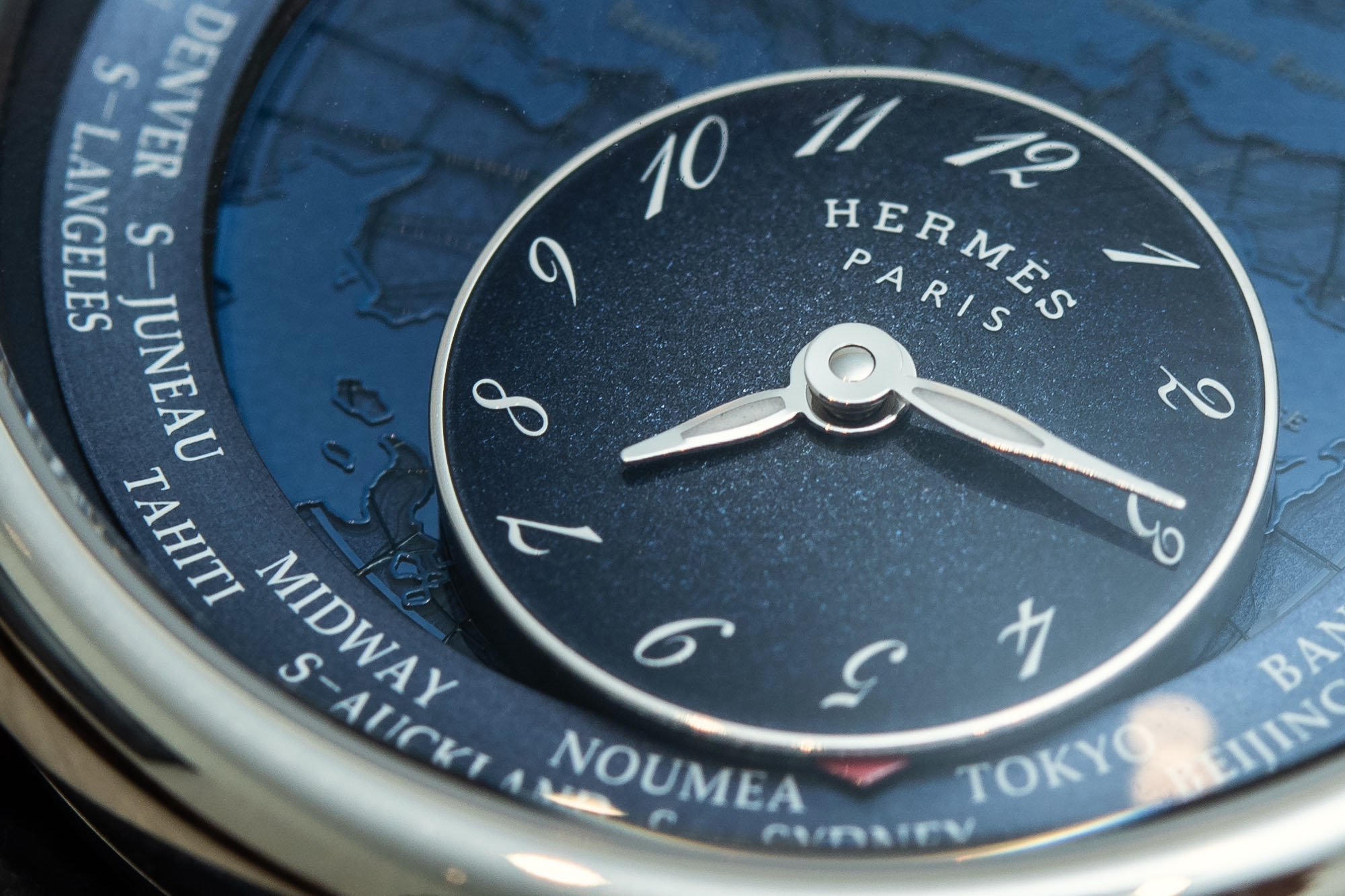 Renowned luxury brand Hermès and watch movement specialist Jean-François Mojon of Chronode have united their powers once again to produce the latest in a series of whimsical, expensive, and rare watches donning that special “H,” called the Hermès Arceau Le Temps Voyageur. We took a hands-on look at Watches & Wonders 2022.

Hermès likes to say its Arceau Le Temps Voyageur brings with it two invitations to travel — for one, here, in the real world, and for two, on an imaginary journey within Hermès’ world, specifically into an “equestrian planisphere.” First, and likely more fascinating for us watch nerds, is the way Mojon’s creation blends a GMT and a worldtimer. At the top of the dial in the flange ring is a three-wide aperture labeled “Home Time,” and on the left-hand side is a small, neatly shaped pusher linked to the subdial that displays “Local Time.” 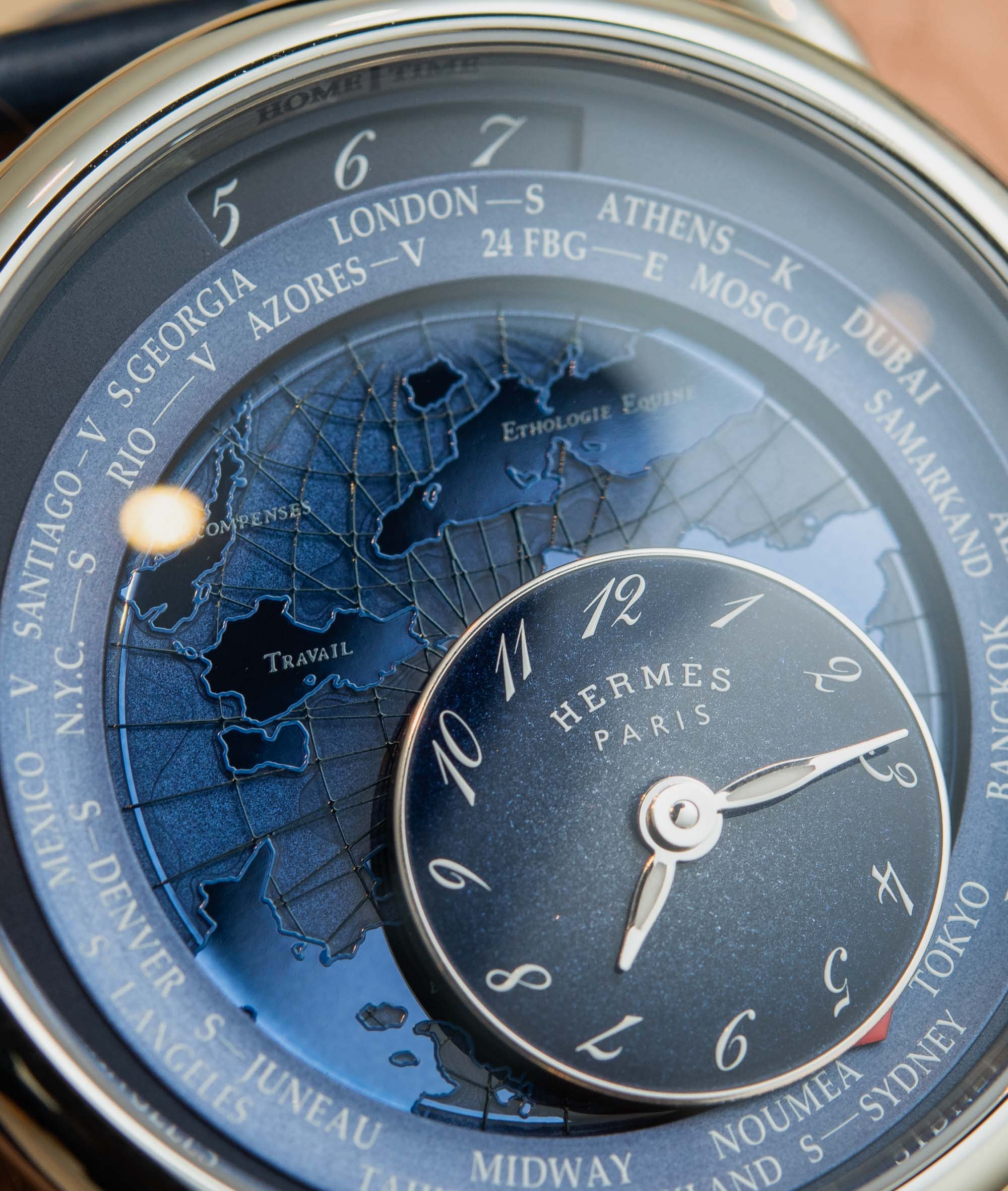 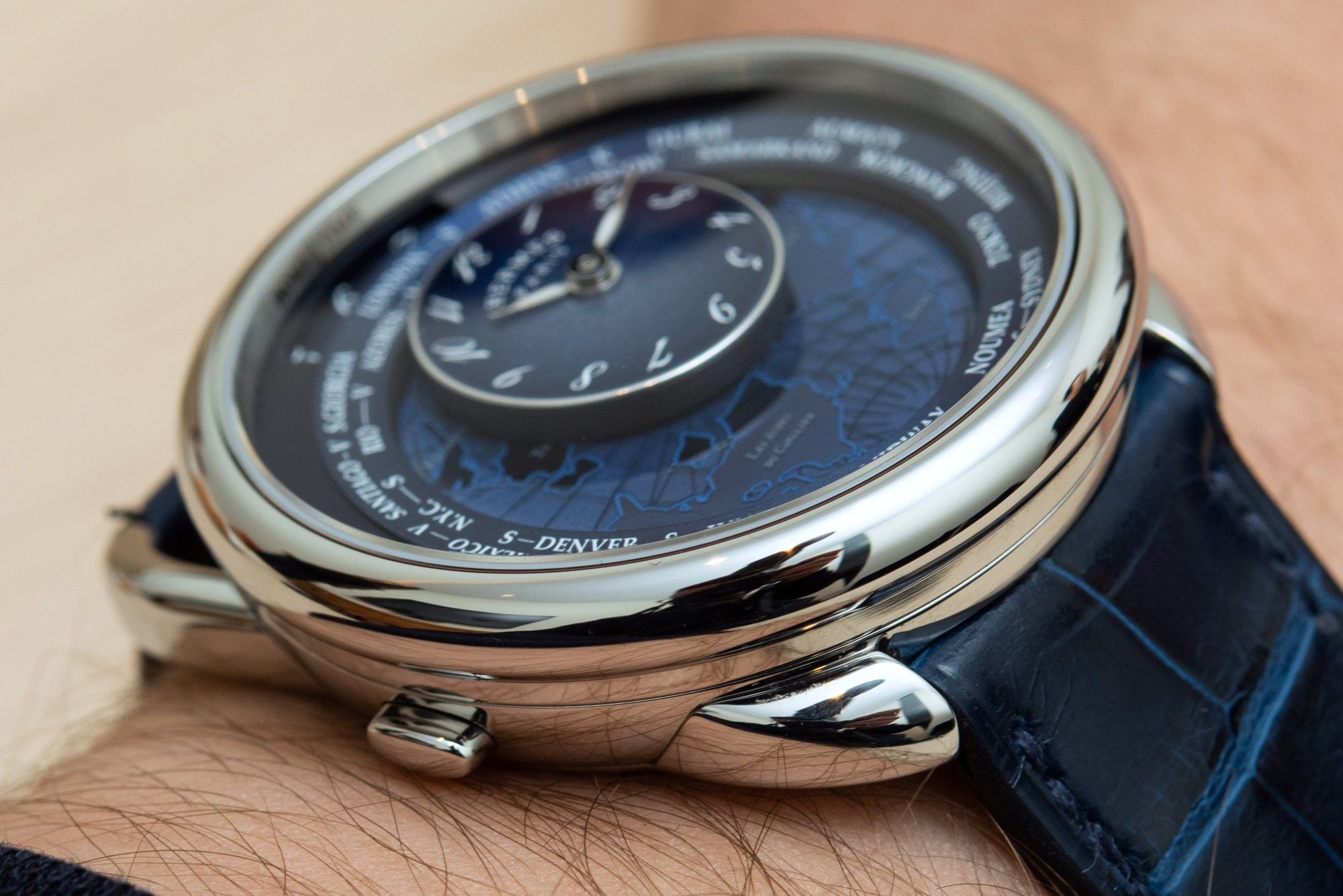 Press on the pusher and something surprising happens: What probably appeared to have been a heavy and therefore fixed dial used to tell time suddenly makes a jump — it is extremely rare, after all, that we see a subdial move on a watch’s face, and so there is no reason to expect one to do just that. The dial moves, and along with it its small red triangle, which might require a second, closer look to spot, advances with it and points to the next city or, should we say, the next time zone named on the periphery of the dial. A new timezone must mean a new time, too, and that’s exactly what happens: As the subdial moves, its hour hand also advances by an hour. 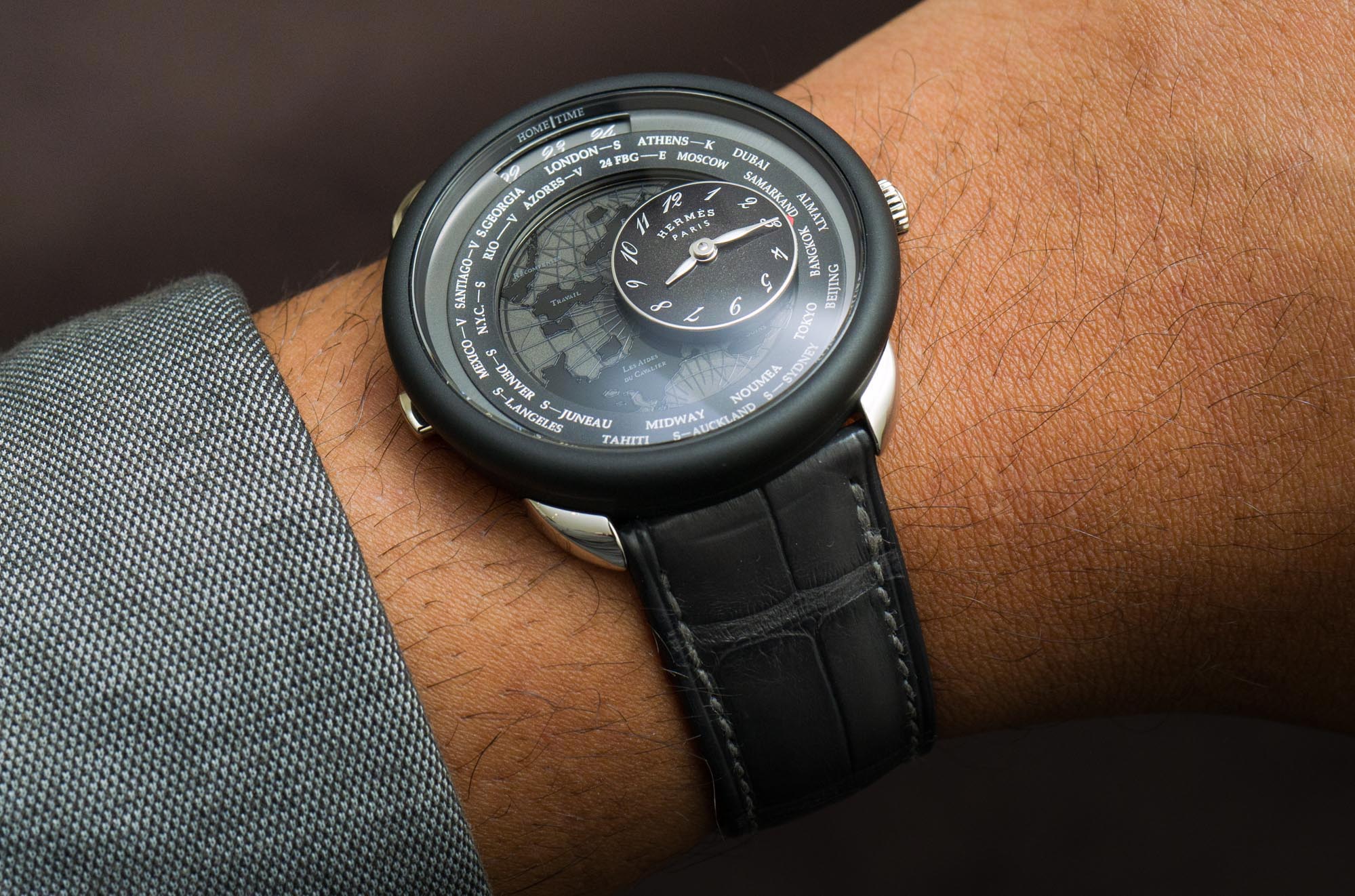 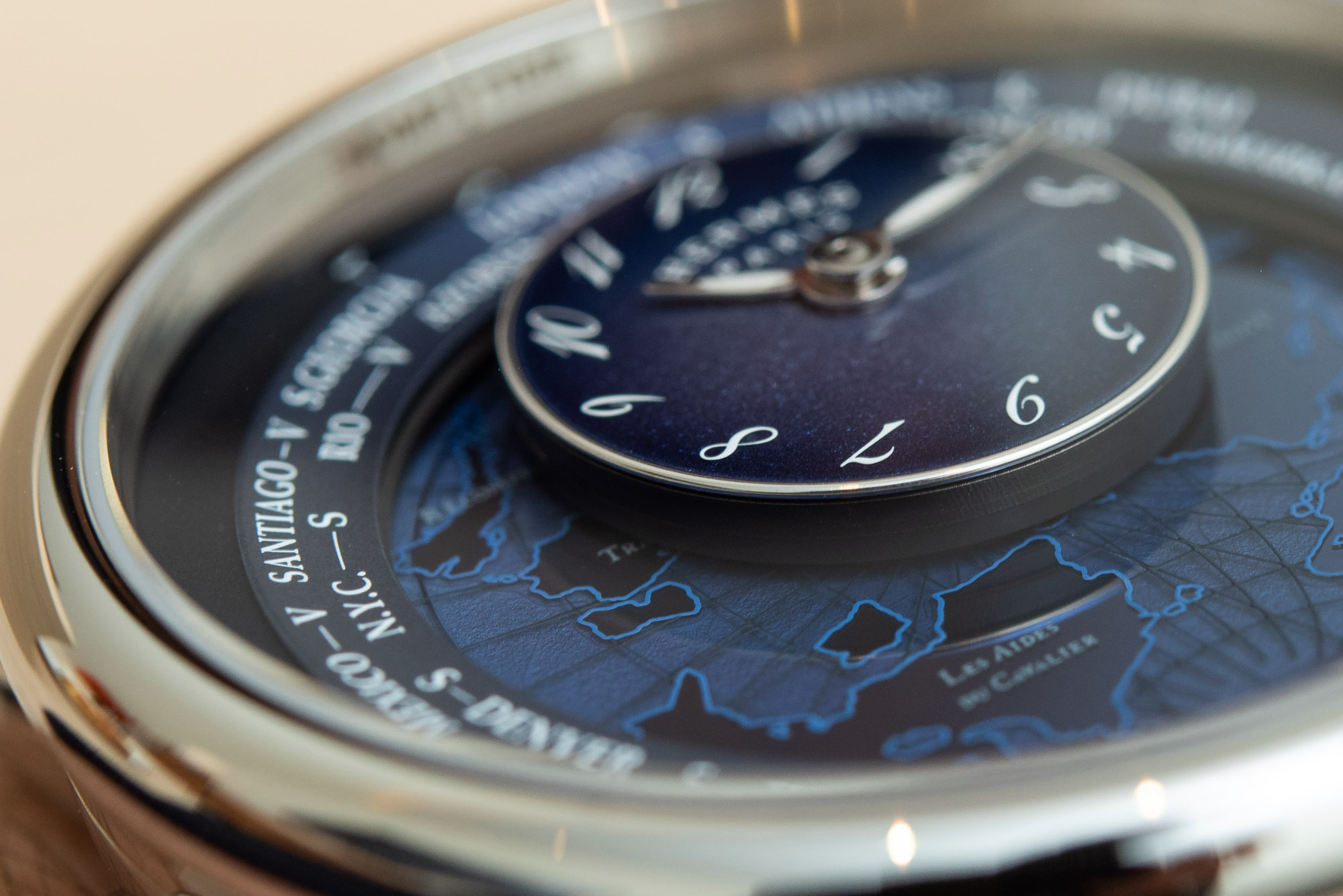 As this happens, the “Home Time” aperture remains unchanged, of course. Just because the owner of the watch is traveling, time back at home must have remained the same. To change the home-time indication, the crown can be used, and that is when all indications — the hours and minutes on the subdial and the hours in the home time aperture — can be adjusted. This is typically the tactile and fun experience higher-end Hermès watches have been consistently delivering for years. What helps achieve this level of consistency is Hermès’ desire to allow its designers and watchmakers (internal and external to the company) to practice their creativity, as well as Hermès’ involvement with a selection of Swiss movement, dial, and case manufacturers, including those primarily owned and operated by Parmigiani Fleurier. Since 2006, these facilities have developed and harnessed their truly outstanding know-how to create movements, cases, and dials of rather more novel designs. Without this flexibility and the company’s stake in these facilities, consistently producing watches with such unique features would likely be impossible. 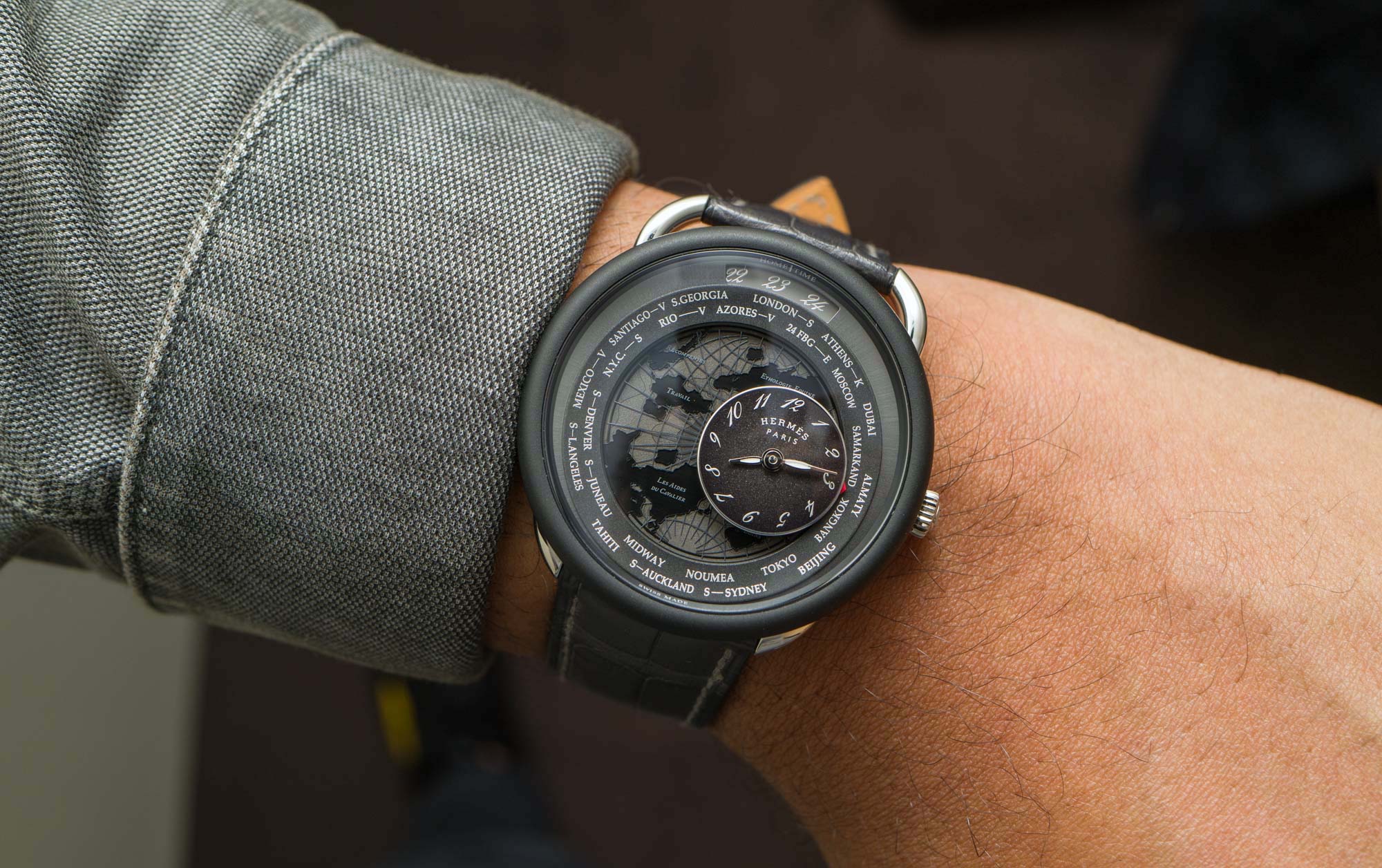 The same goes for the case: The 41mm-wide gray version of the Hermès Arceau Le Temps Voyageur sports a platinum and black DLC-coated titanium exterior, a combination that is exceedingly rare, if not unique. The 38mm blue variant offers an all-steel case. Likewise, in true Hermès fashion, the so-called Arceau case features a horizontally asymmetrical design in that the top lugs are of a completely different execution than the lower ones. At the top, they resemble welded wire lugs, a bit like those on a Panerai Radiomir, while on the lower side of the case they are short and stubby. 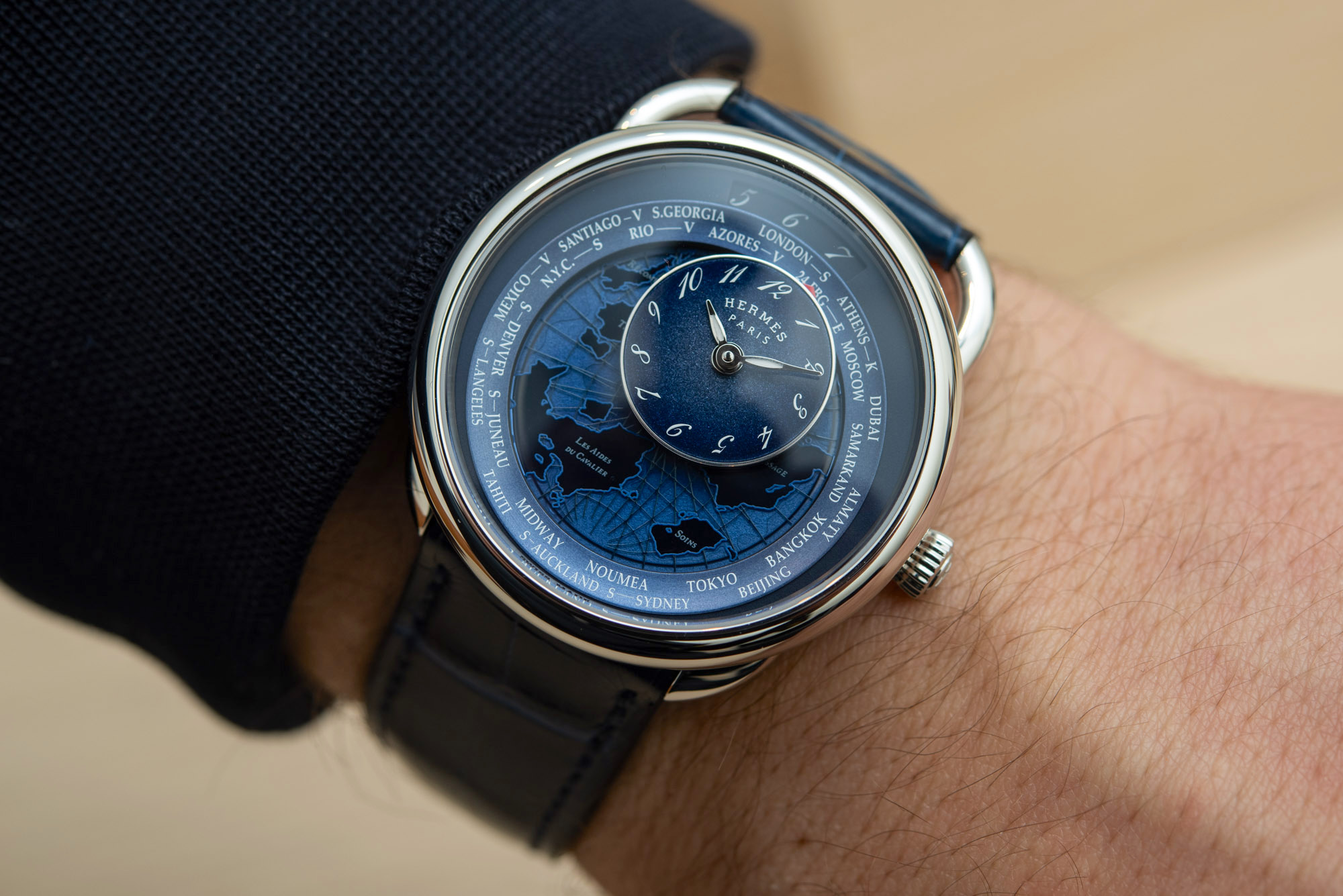 A fun aspect of the Hermès Arceau Le Temps Voyageur is to see how long it takes for one to notice that the map behind the satellite time display is an imaginary one and has nothing to do with any of our maps of Earth’s continents and oceans. Hermès added this playful detail “to make the link between one’s personal travels and the brand’s equestrian world.” Fans of Hermès will know that the company started out in 1837 as a saddle workshop in the Grands Boulevards quarter of Paris, dedicated to serving European noblemen, and the world of equestrianism remains very close to all things Hermès. The imaginary world map, or “planisphère d’un monde équestre,” was created by artist Jérôme Colliard for a silk scarf of the same name, inspired by a giant globe created by the French graphic designer for the 2016 Saut Hermès showjumping competition in Paris. Hermès explains: “This map of an imaginary world, inspired by antiquity, features whimsical drawings and names evoking riders’ love for their mounts, seemingly drawn from the archives of a geographer of invisible lands.” 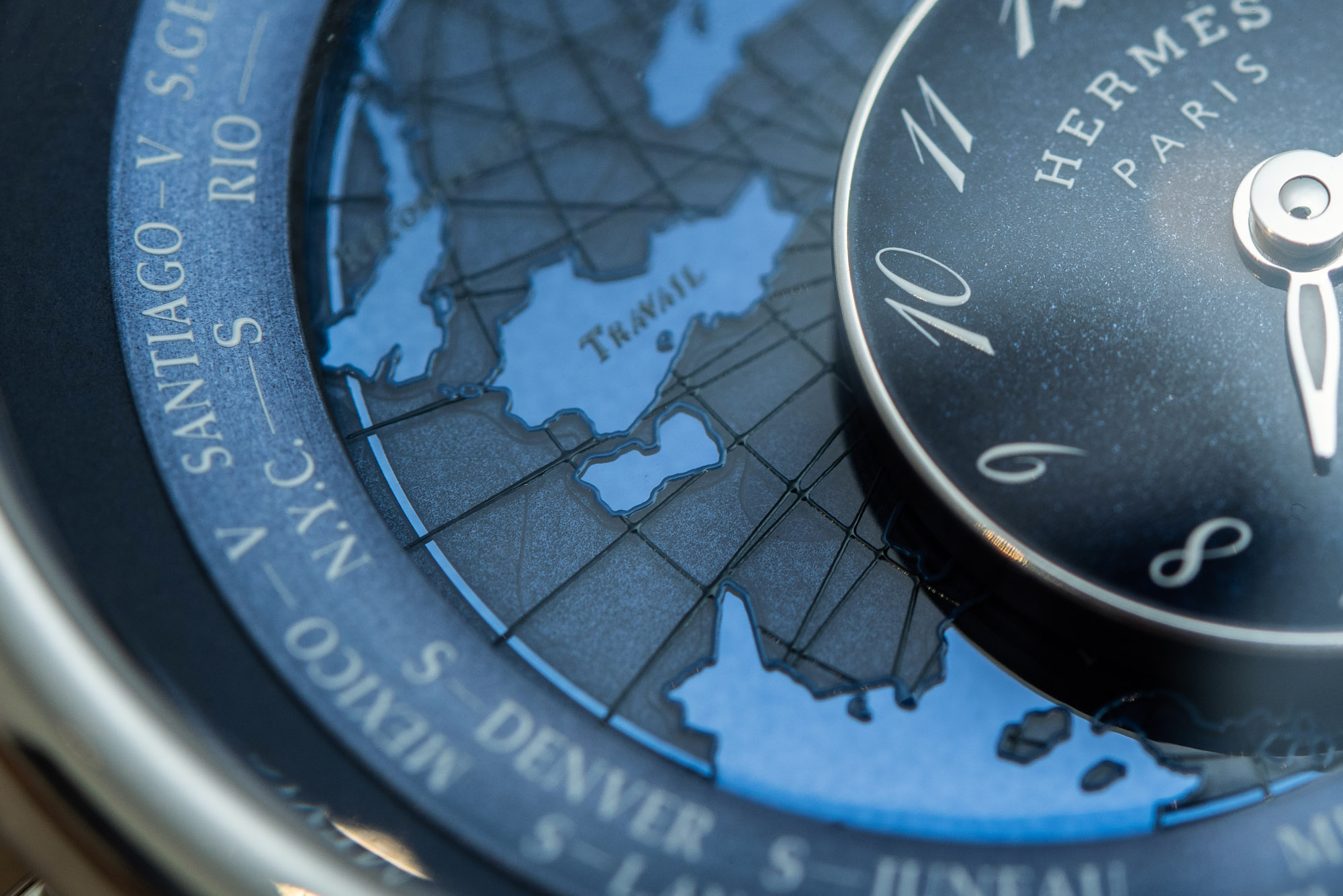 Both dials are galvanized, laser-engraved, and lacquered for a refined and elaborate result. Certain parts, like the flange ring with the city names, are either sandblasted or satin-brushed, adding a tasteful, matt split frame to the shiny dial and sub-dial. Legibility remains excellent thanks to the high contrast between the sub-dial and its delicately shaped and in fact lumed hands, while home time is also easy to find and read where normally one would find the 12 o’clock marker. 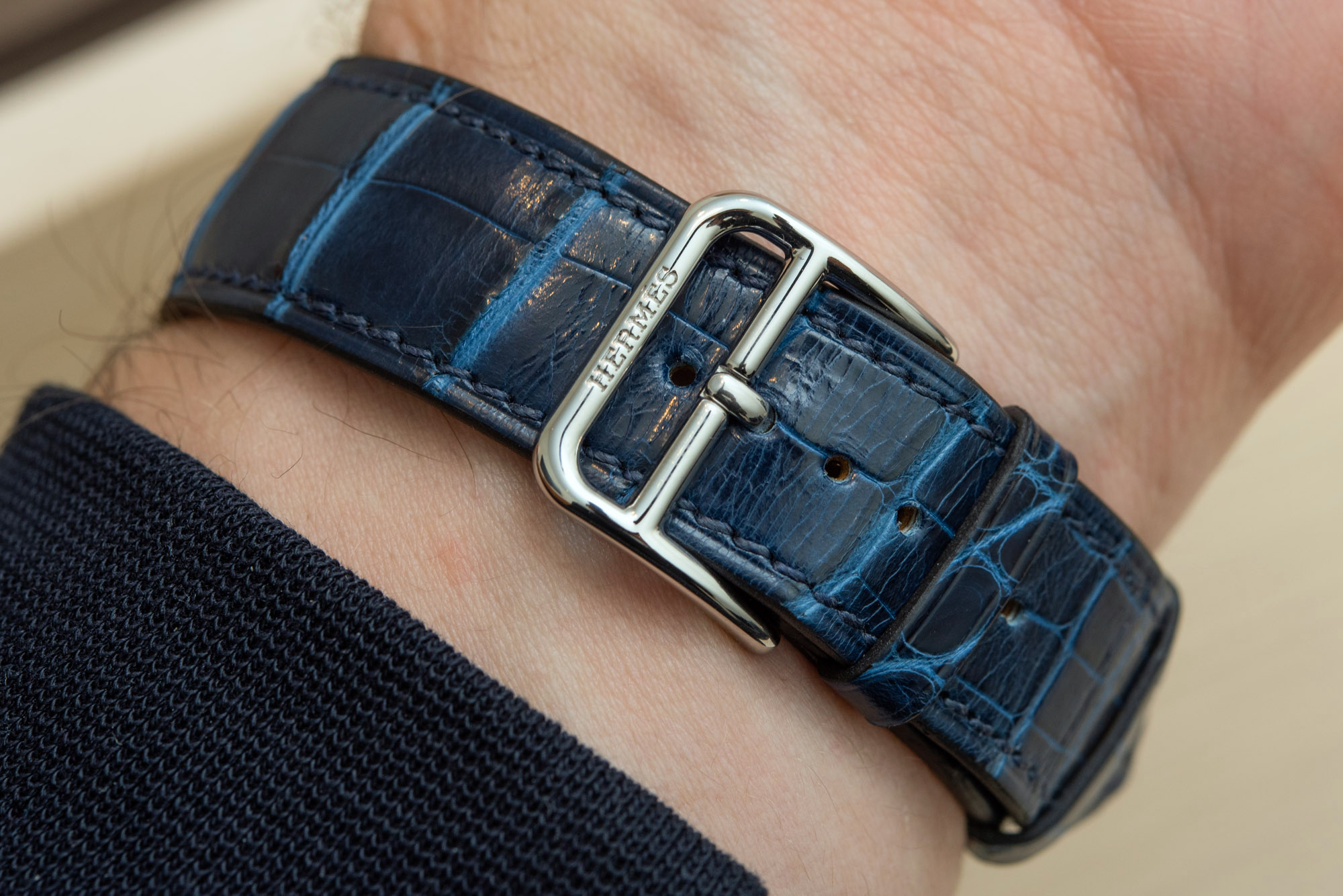 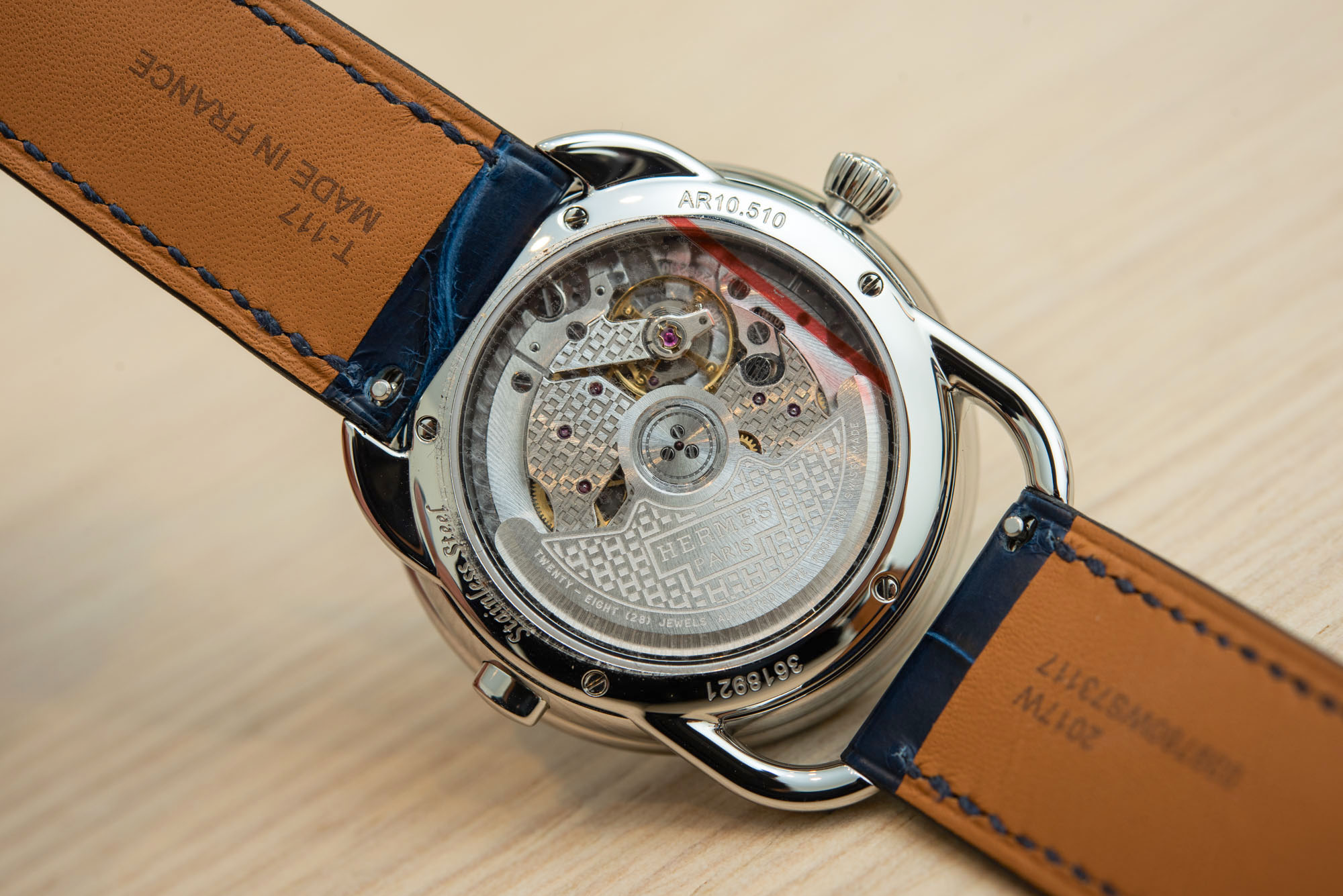 All this is powered by the Hermès H1837 caliber produced by Vaucher and fitted with a module that is coming from Chronode to operate the moving sub-dial and the world time display. Power reserve is short at just 40 hours, but at least it’s matched to a more stable 4 Hertz frequency and a full-size self-winding rotor. Water resistance is rated at 30 meters, which is virtually splashproof, at best, but then again, no true Hermès fan would take an Hermès leather strap swimming, anyway. 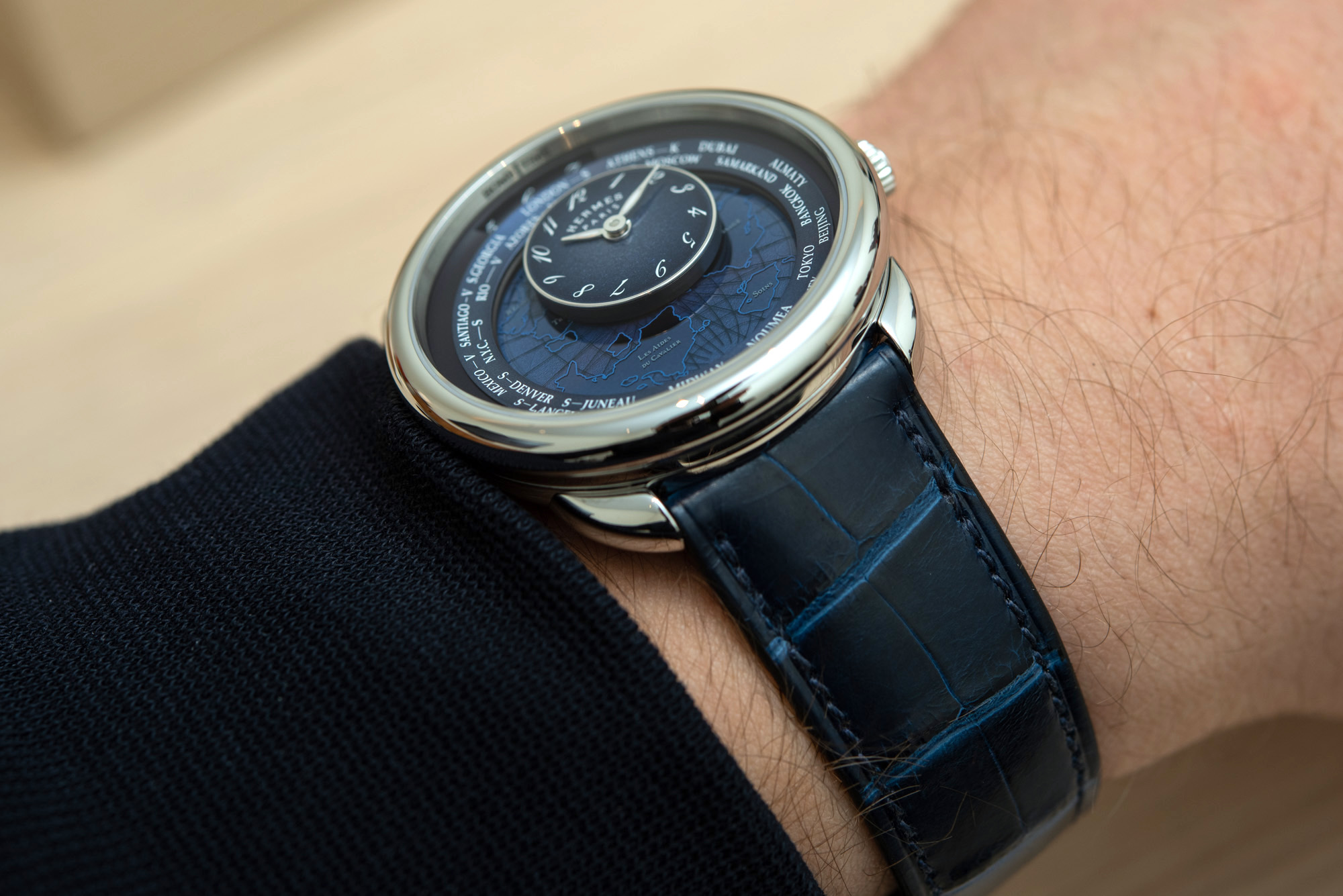