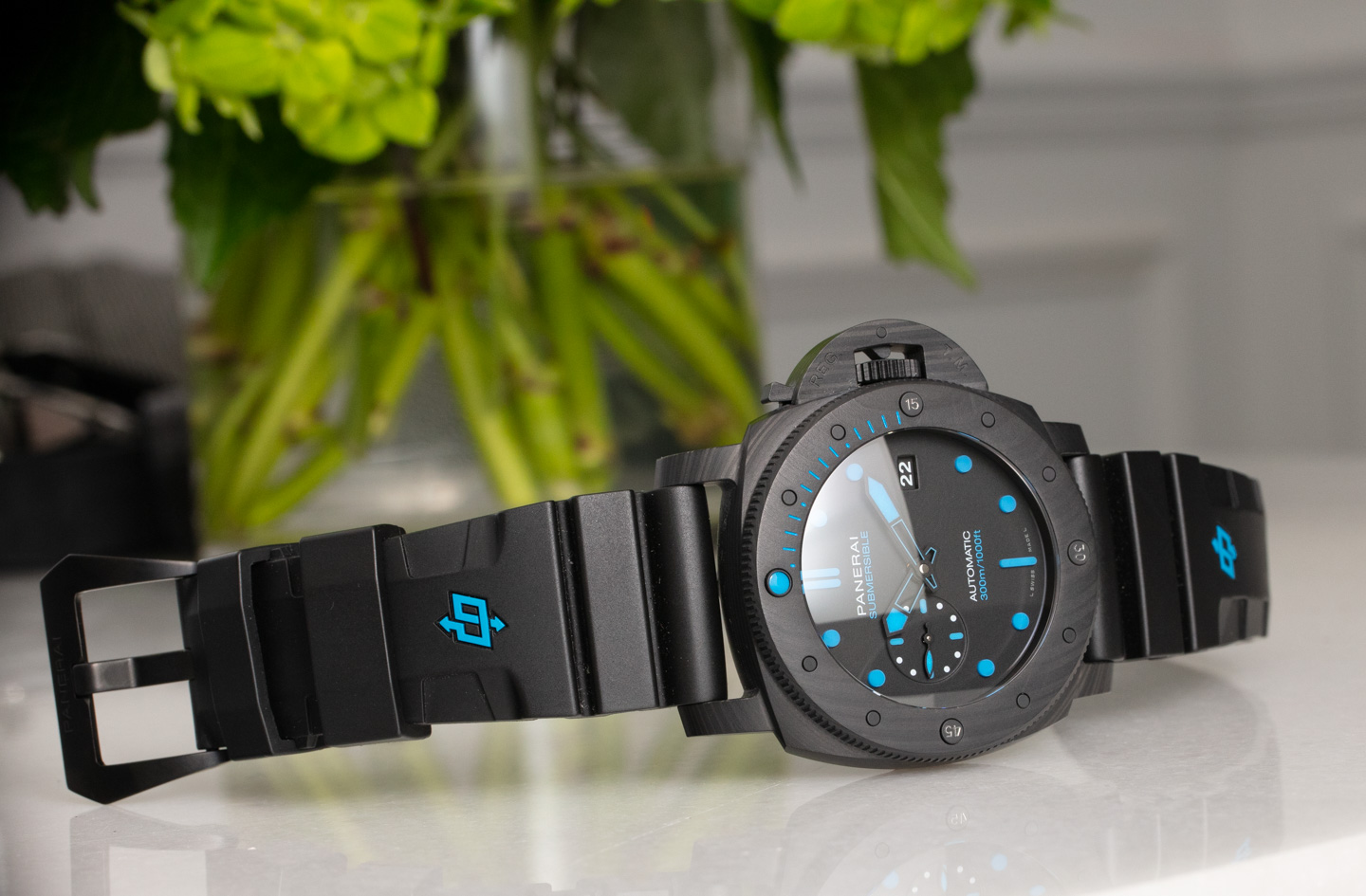 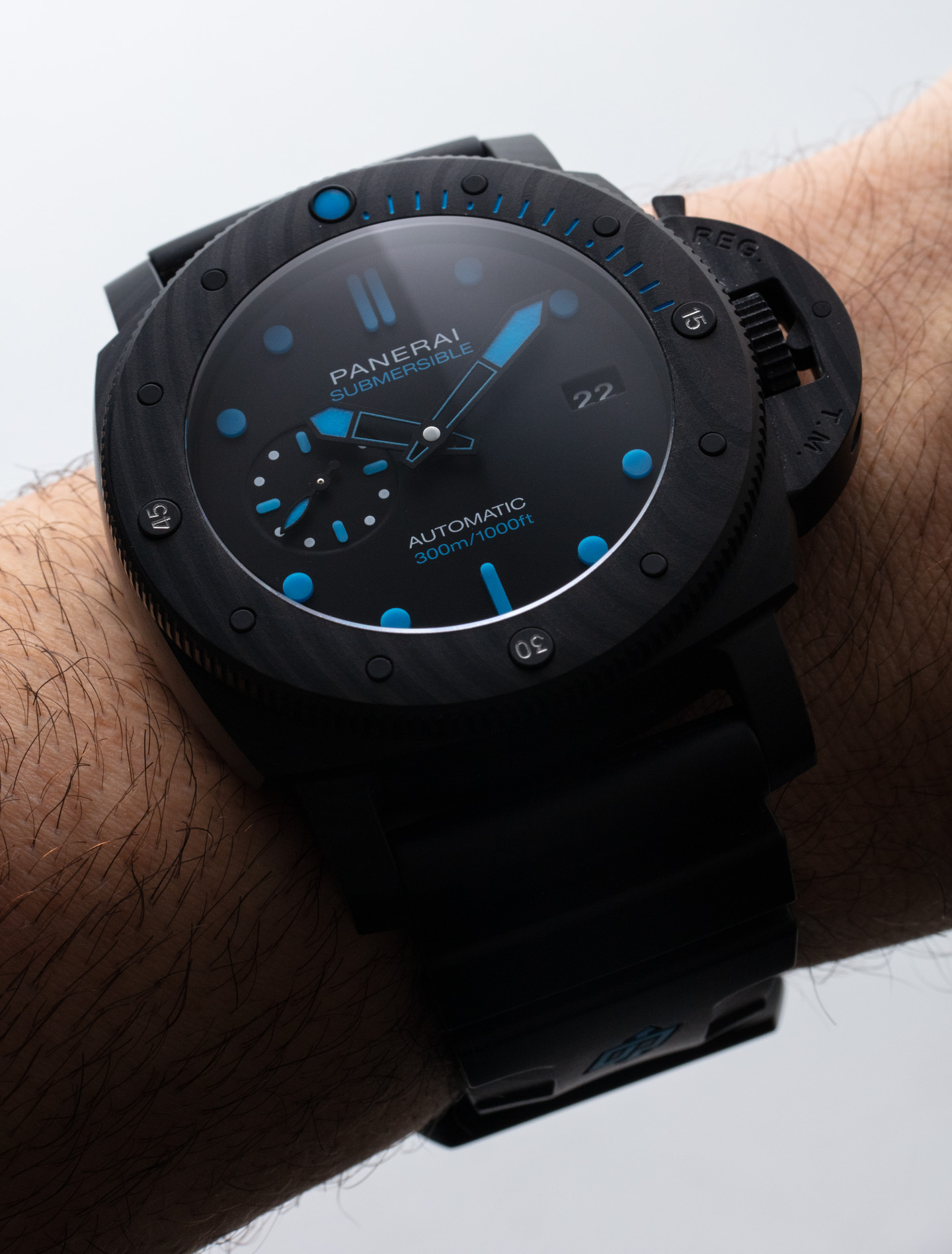 As a brand, Panerai represents a lot of things to different people in the watch space. It is the favored brand of Mr. Rupert, who controls parent-company the Richemont Group, and to a lot of collectors, it was the name that ushered in the era of bold luxury sports watches. More recently, Panerai has further increased its luxury positioning and is attempting to find a new groove within today’s complicated space of Internet marketing and pandemic-related social restrictions. At the end of the day, Panerai is a luxury brand of adventure watches, and the last few years have been an adventure, indeed. Today, I go hands-on with a Panerai watch (the Submersible Carbotech) that was originally debuted by aBlogtoWatch two years ago (in January 2019).

The design story of the Panerai PAM01616 (aka PAM1616) actually goes back to 2017 when Panerai released the ritzy concept watch (that was for sale) — the LAB-ID Luminor 1950 Carbotech (aBlogtoWatch hands-on here). You can see the use of the interesting carbon case material, as well as the introduction of more electric colors on the dial, including a version of this electric blue color. Panerai has also played with the colors and text on the dial with this Submersible Carbotech family, including these “Marina Militare” labeled versions of the same watch with green or off-white color accents (aBlogtoWatch debut here). It just wouldn’t be Panerai if they didn’t release a number of style experiments and variations on similar themes. Let’s also not forget the more recently released Panerai Luminor Marina Carbotech PAM01661 (aka PAM1661; aBlogtoWatch hands-on here) which is a sort of close cousin model to this PAM01616. 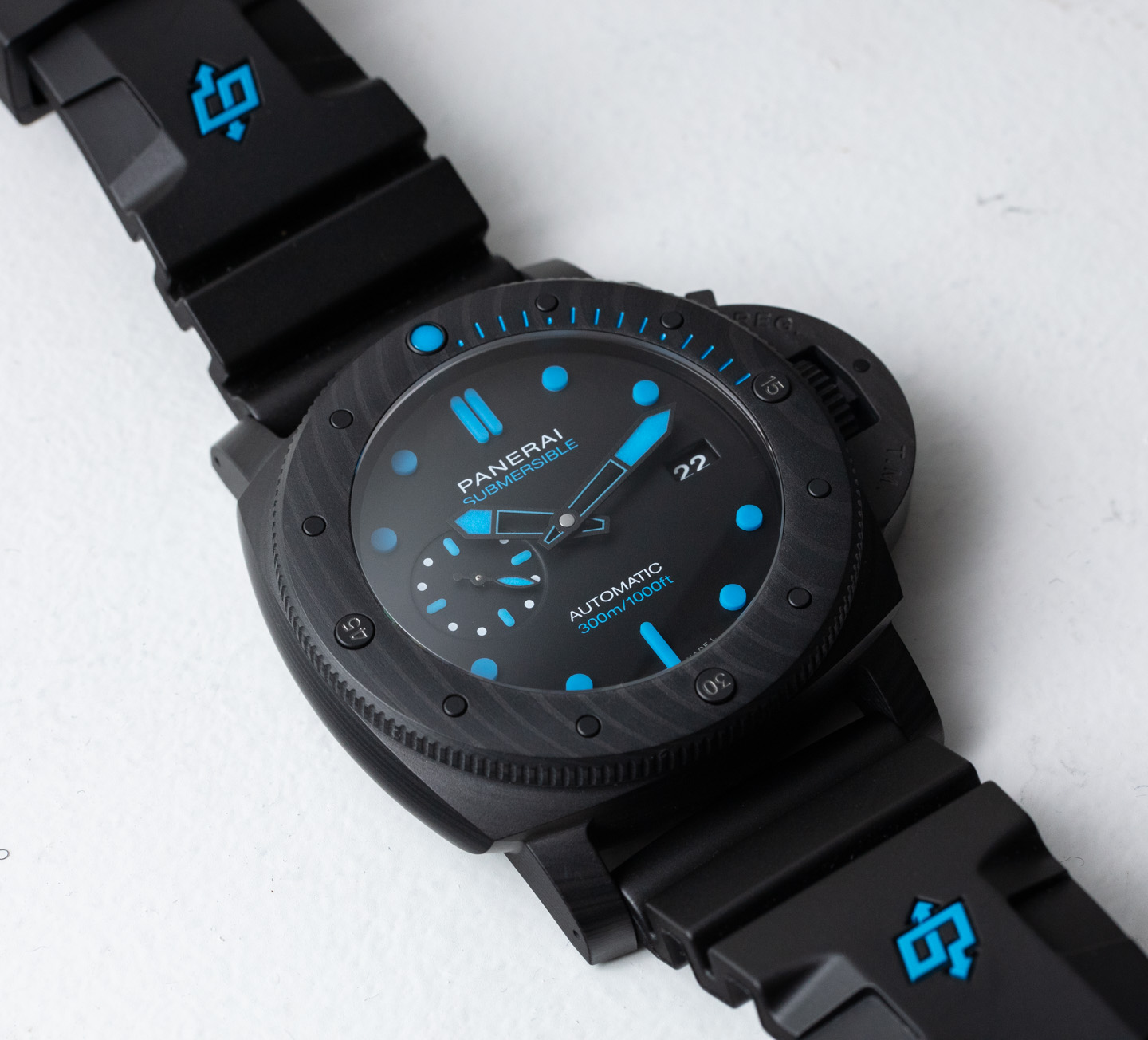 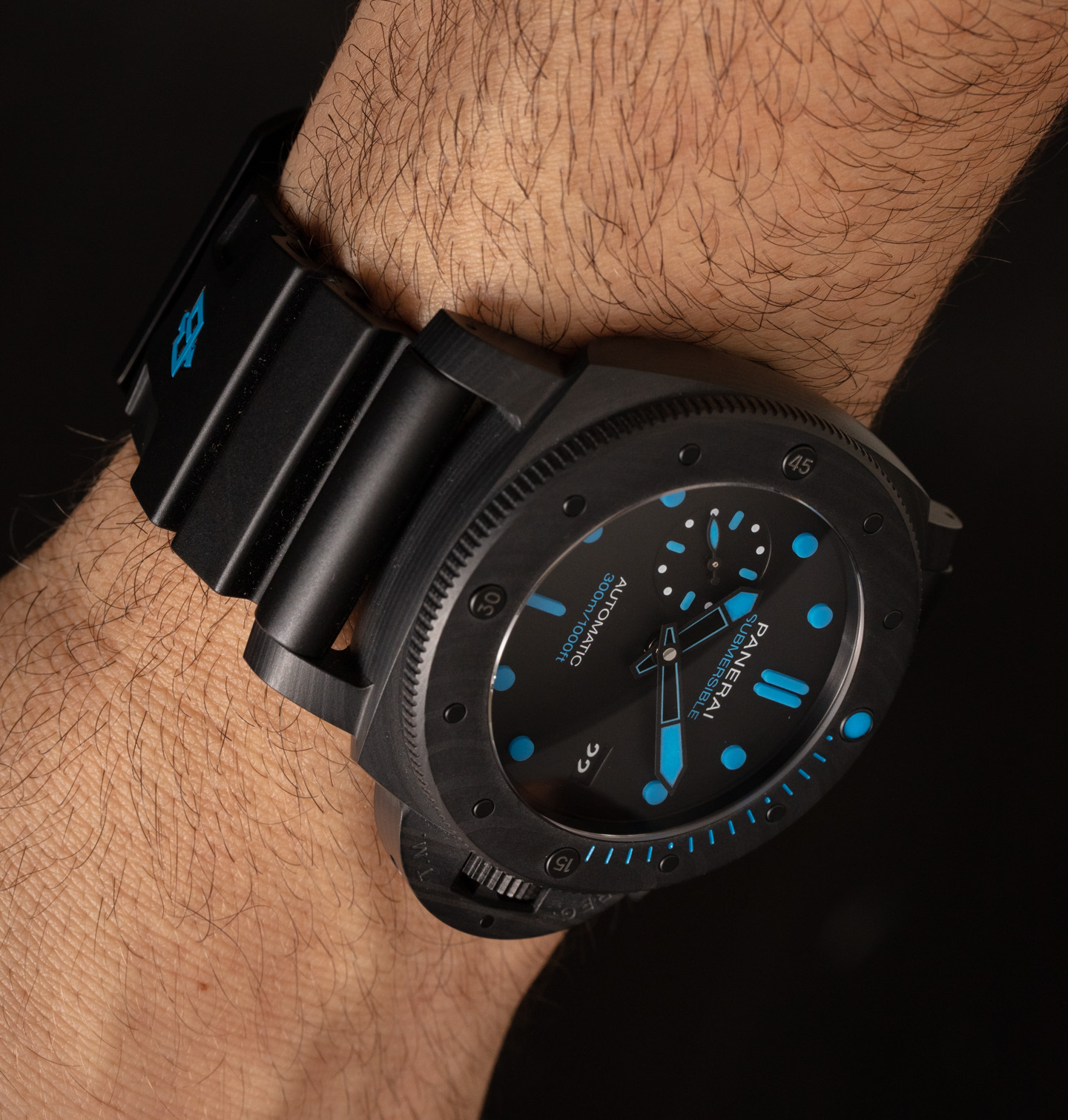 Going back to the diver’s-style watches, easily the most modern-looking of the Submersible Carbotech models is this version with the blue dial accents and the updated hands, which still looks nice after coming out a few years ago. Note that Panerai produces this watch as both this 47mm-wide PAM01616 and the 42mm-wide PAM960. This larger model has an in-house Panerai movement, while the smaller 42mm-wide version has a sourced Swiss Made automatic movement. Otherwise, the product case size differences are merely there to offer more variety to a market that doesn’t all wear the same size wristwatch.

Carbon is among the most popular “new” case materials today, and the interesting thing is how little various carbon cases have in common. Perhaps, for that reason, brands like to create special names for their own carbon cases — Panerai goes with “Carbotech.” (Luminox has Carbinox, for example.) What is interesting about carbon is that it is not just a material for expensive watches. $100 watches come in carbon cases, too. The thing with carbon is how it is produced, what it is mixed with, and how it is cut and finished. Panerai’s black Carbotech material is hard, lightweight, and able to be precision-machined (though the caseback for water-resistance purposes is made out of metal). What’s more, Carbotech has an attractive grain when cut, offering a sort of Damascus metal “wood grain” feel to it. It really makes for a neat look and is said to be a combination of carbon and PEEK polymer (a fancy form of plastic, I believe). 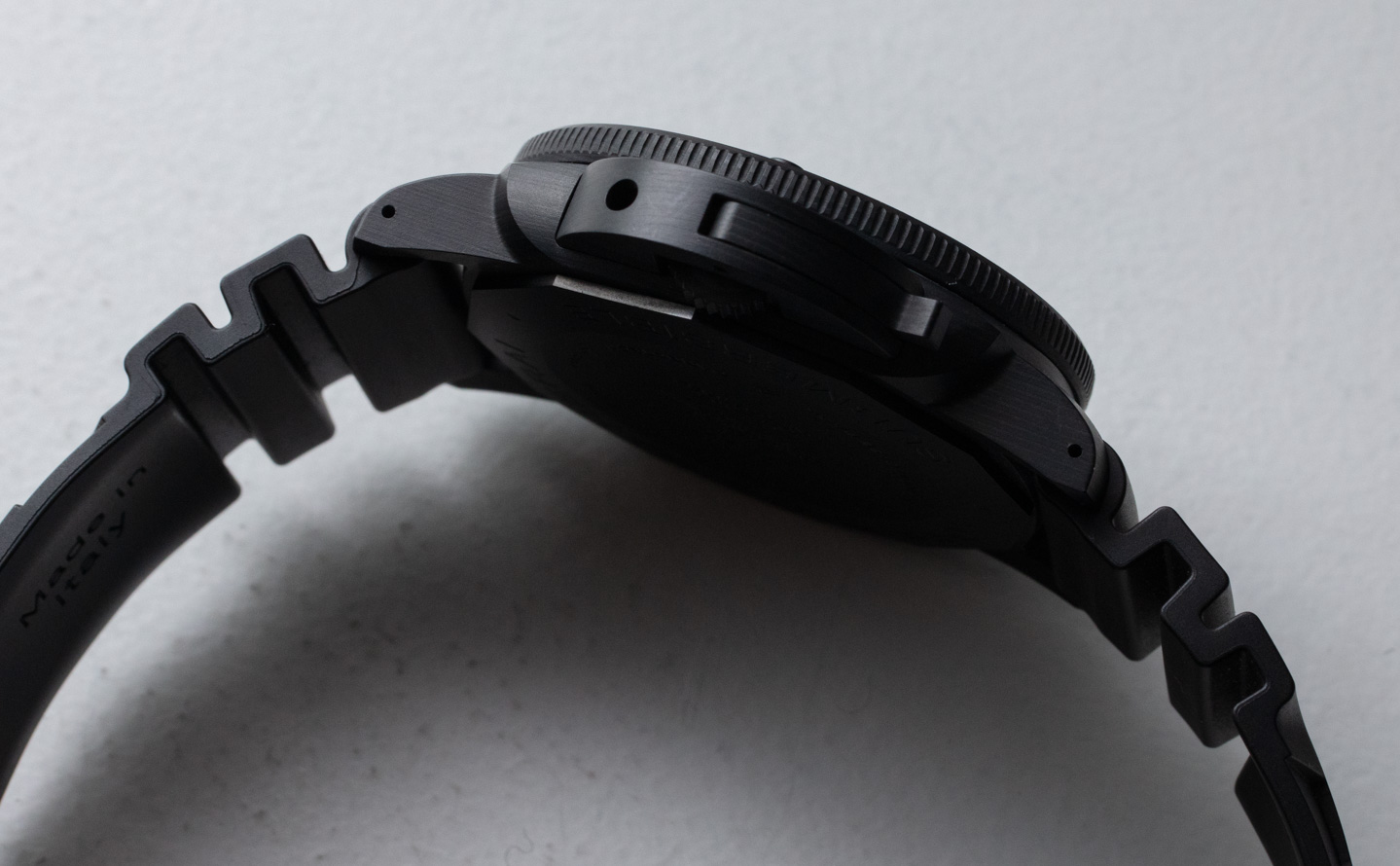 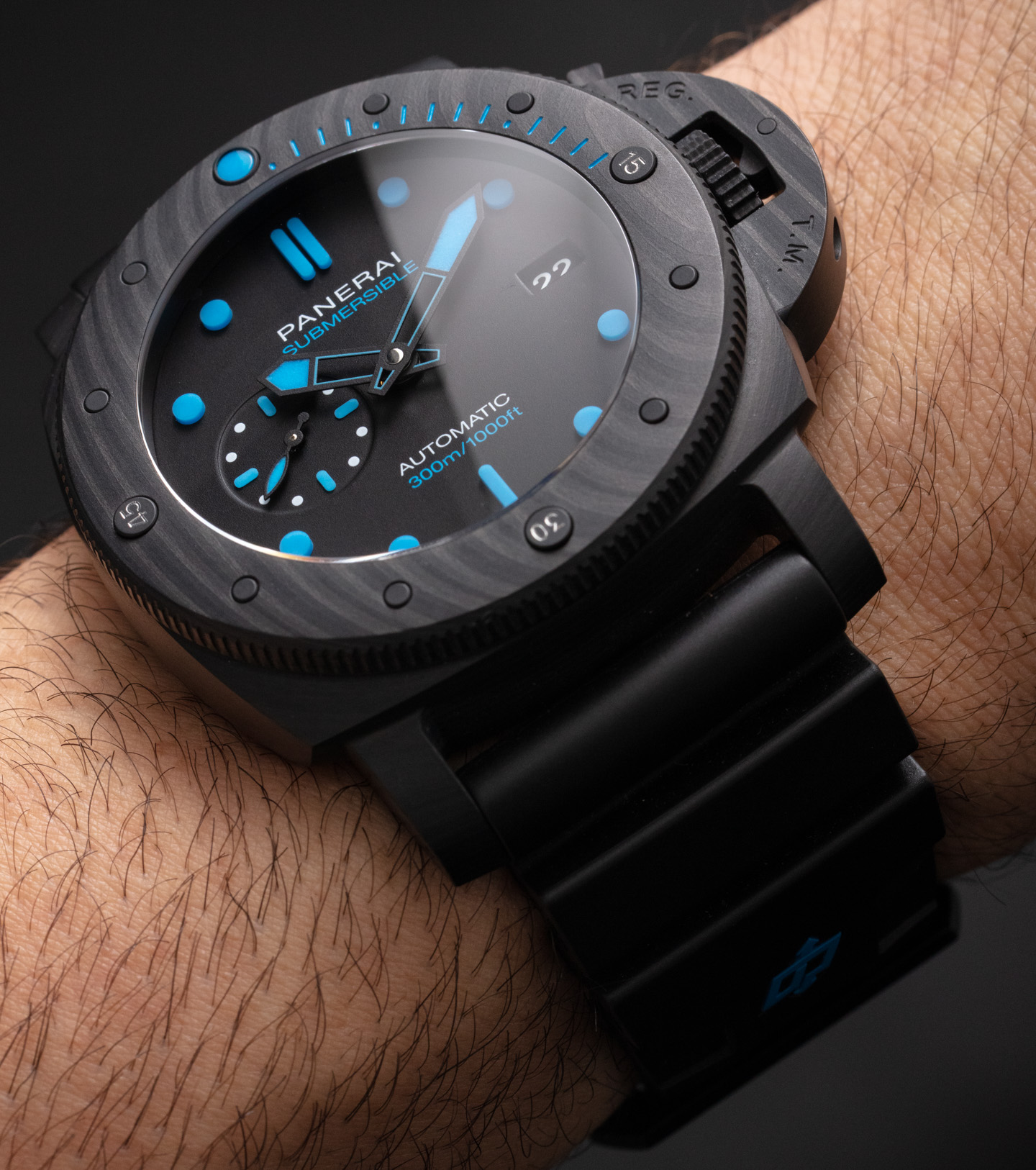 The Submersible-style case has 300 meters of water resistance, a uni-directional rotating bezel, and a domed sapphire crystal over the dial. Panerai watches are notoriously difficult to photograph given dial glare on account of the sapphire crystal curvature. This isn’t as much of an issue in real life when looking at the dial to read the time, but these aren’t glare-resistant crystals, either. I, for one, would actually like to see a Panerai watch with a lot more AR coating plus a protective layer over that. Panerai’s argument for not using AR-coating on the top of the crystal is because it can scratch off. I get that, but the benefits of more anti-reflective coating could be an upgrade to an already great wearing experience, and I think it merits more experimentation.

The PAM1616 (PAM01616) Submersible case is 47mm-wide and 16.8mm-thick. The straps are quite wide at 26mm, but the entire package wears so comfortably on the wrist you don’t mind. Like I said, the 42mm-wide version of this watch is also available for those who love the look but not the size. The dial is a highlight, and I really like how the classic Submersible dial is enhanced with the newer style of hands and the hour markers, which are produced from pieces of solid blue luminant material. The dial features the time with a subsidiary seconds dial, as well as a window for the date (with a matching black date disc). 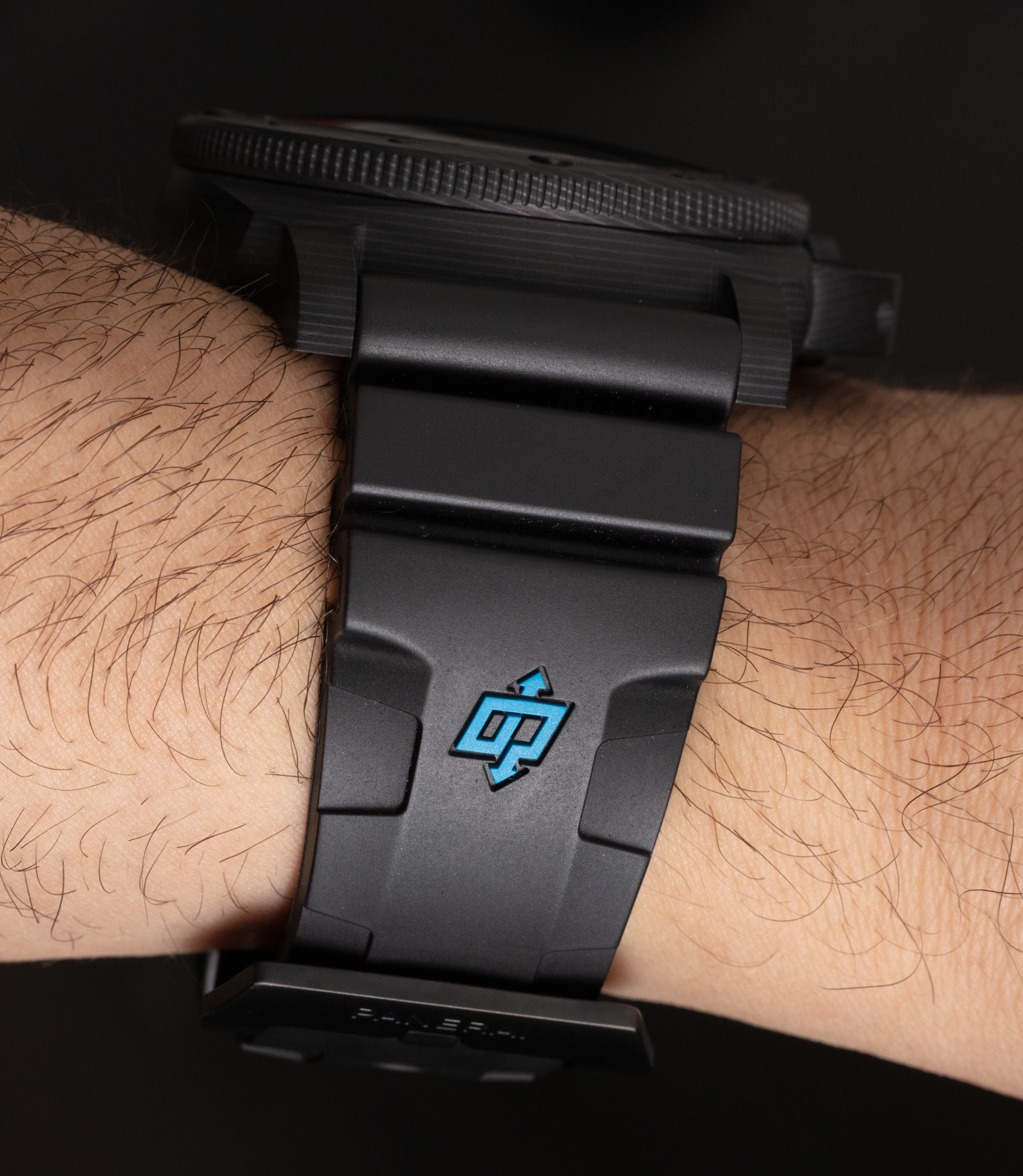 Inside the PAM1616 is the Panerai in-house made caliber P.9010 automatic movement. It operates at 4Hz with three days of power reserve and is designed to be more of a workhorse for a watch this size versus anything else. The smaller 42mm-wide Submersible Carbotech uses a different movement, but they are said to feature the exact same performance and power reserve (at least on paper). Panerai actually prices the two sizes of the Submersible Carbotech watches very close to each other, with this larger 47mm-wide version costing only $500 USD more than the 42mm-wide model. Both are handsome, undeniably expensive watches. This particular Panerai watch I got to check out while meeting with Mr. Porter, an authorized dealer. 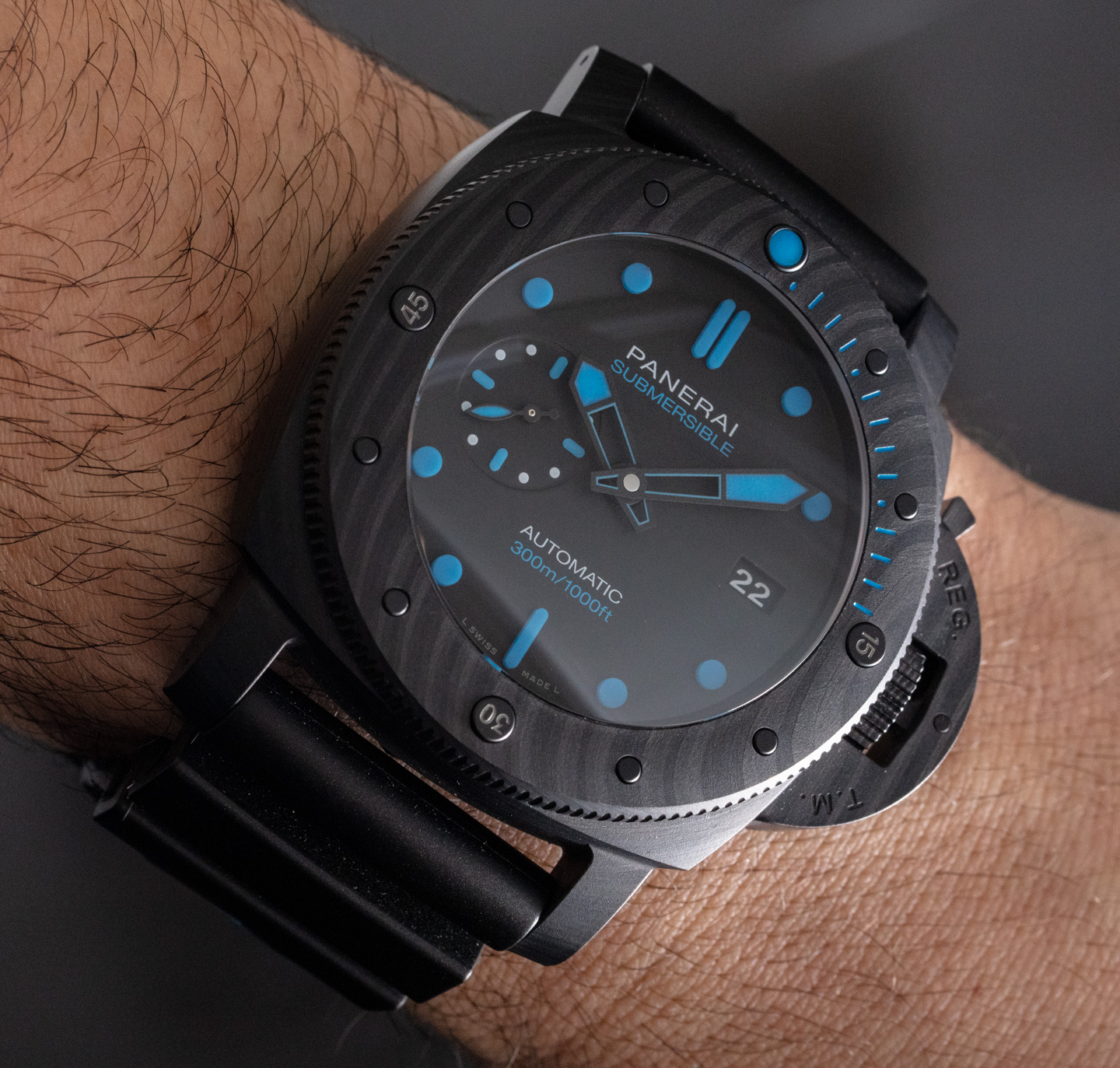 Why are they so expensive? Don’t get me wrong, the quality and design excellence is there. But it is true that many people feel Panerai should cost less. So, why don’t they? I think it has a lot to do with market positioning. Panerai is in a more landed position when it comes to luxury sports watch aristocracy. It can, perhaps, compete better in a high price point with less direct competition (especially with these designs) versus having a lower-priced watch in a much more competitive segment (say the $5,000 – $10,000 range). People who buy Panerai products often “see themselves as wearing a $15,000 sports watch, and not a mere $5,000 sports watch.” This sends a message to people and is part of why Panerai has some of the notoriety that it does. It has never been a particularly inexpensive brand, often following the pricing strategy of Italian fashion companies (and half of Panerai is still run from Italy). There are a lot of people out there who want to wear more Panerai watches but can’t afford them. I certainly sympathize and often feel the same way. That said, I think it is fair to respect the market position that Panerai has and recognize that the core concept (large sports watch with simple dial) has influenced so many other watches today, there are “Panerai-like” options at many price points.

Speaking of fashion, the rubber strap (there is also apparently a Velcro and canvas strap that also comes with the Submersible Carbotech watches) that comes with the PAM1616 is very neat. It has a cool mixture of feeling like something from a professional diver’s watch and something you’d see a character wear in a modern video game. All in all, a very hip piece that has plenty of similar cousin models at Panerai if you want something just a little bit different. Price for the Panerai Submersible Carbotech 47mm PAM01616 watch is $17,900 USD. Learn more at the Panerai website here.