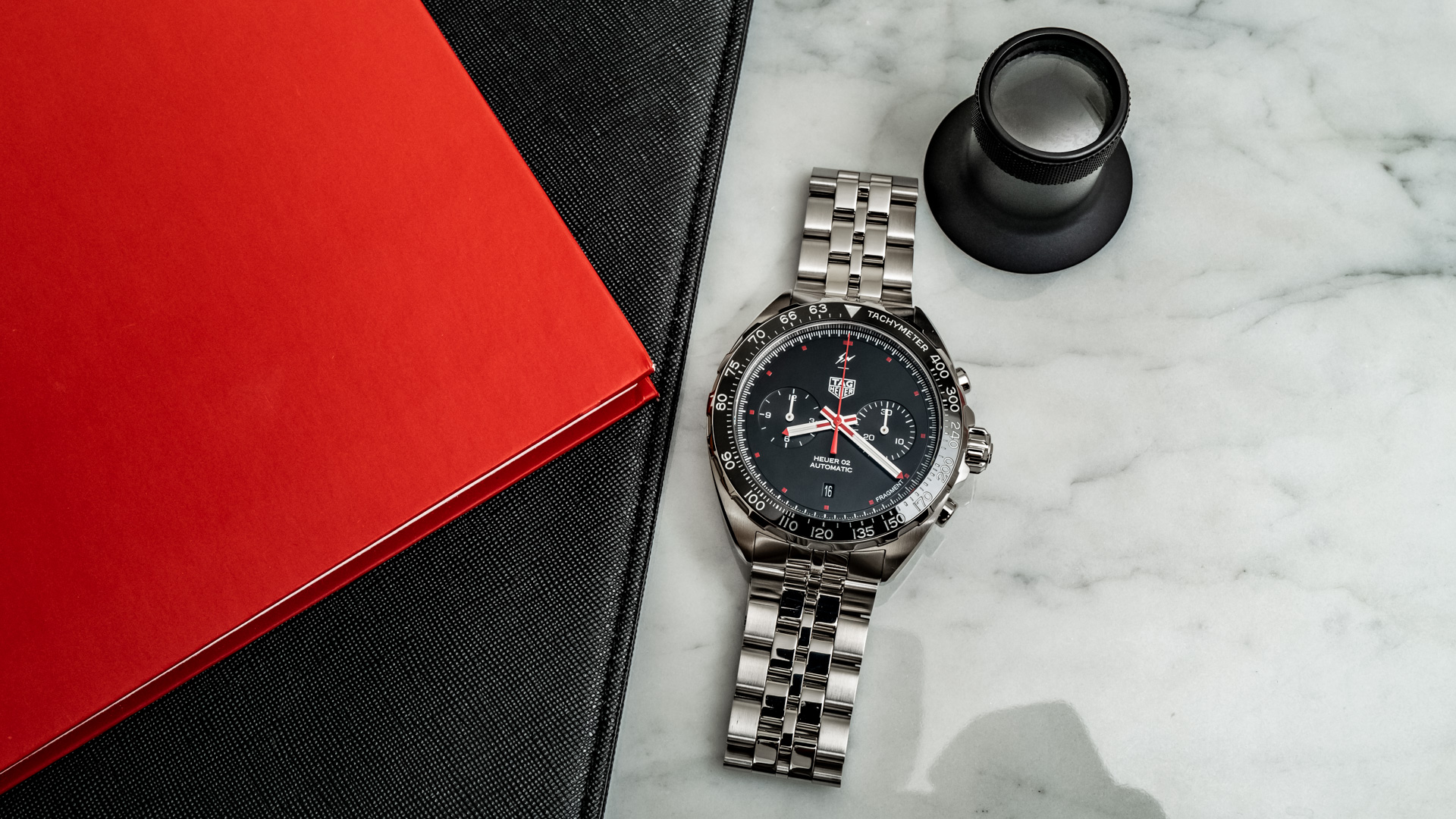 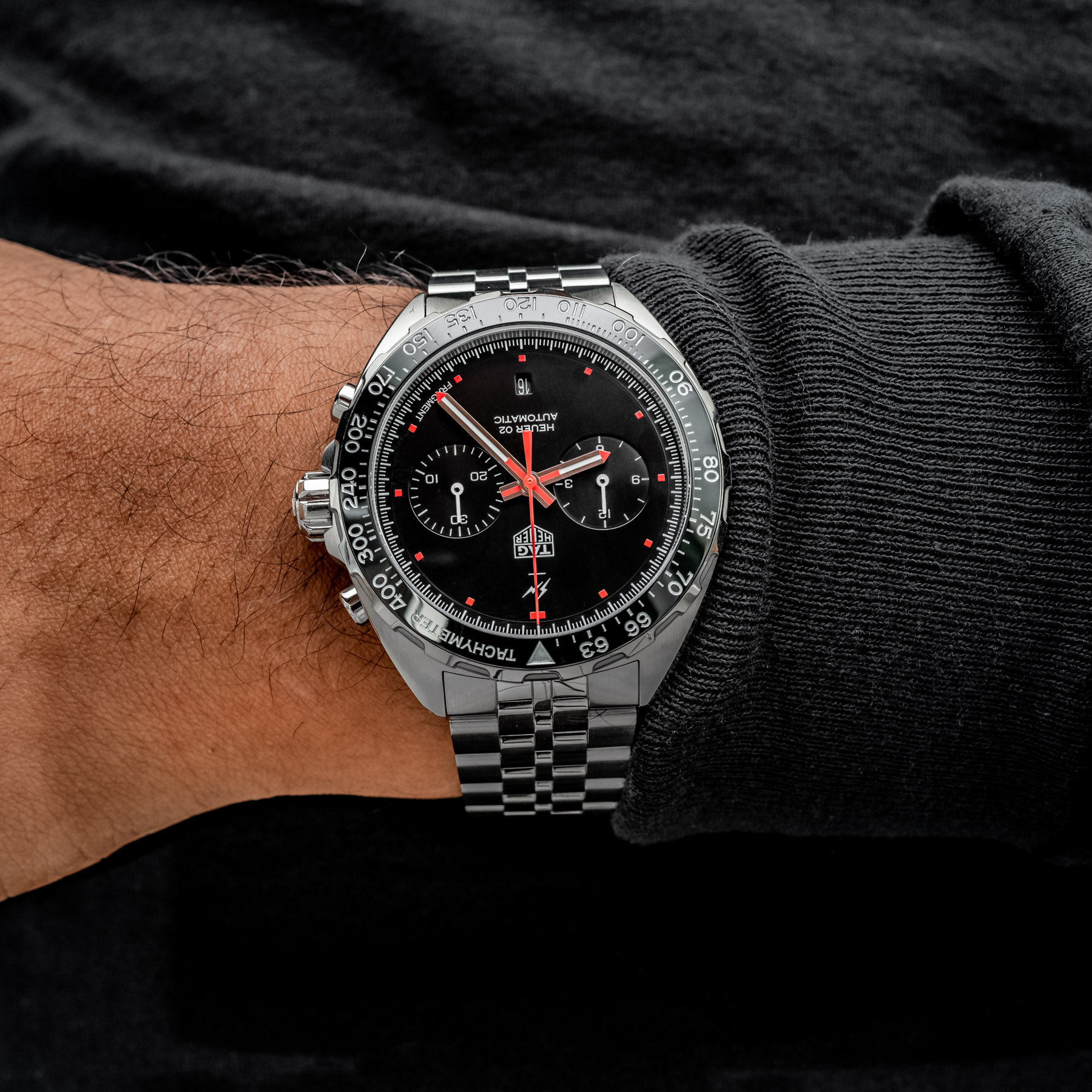 “Are limited-edition collaborations allowed to look this good?” I found myself asking when TAG Heuer’s second piece done with Japanese streetwear brand Fragment Design dropped this June. It’s a series of contradictions that come together in the best possible way. It’s from TAG’s Formula 1 family, but it’s got the in-house Heuer 02 movement and costs as much as a Monaco and more than most Carreras. It’s got vintage Heuer “Viceroy”’ Autavia 1163 inspiration, but it’s presented as a thoroughly modern piece with no reference to the Autavia at all, not even through the use of the vintage Heuer logo. This is a modern TAG Heuer chronograph that is difficult to pigeonhole and an absolute delight to wear. For me, the TAG Heuer x Fragment Design Heuer 02 is a modern classic and is on my shortlist of top chronographs released in 2020. 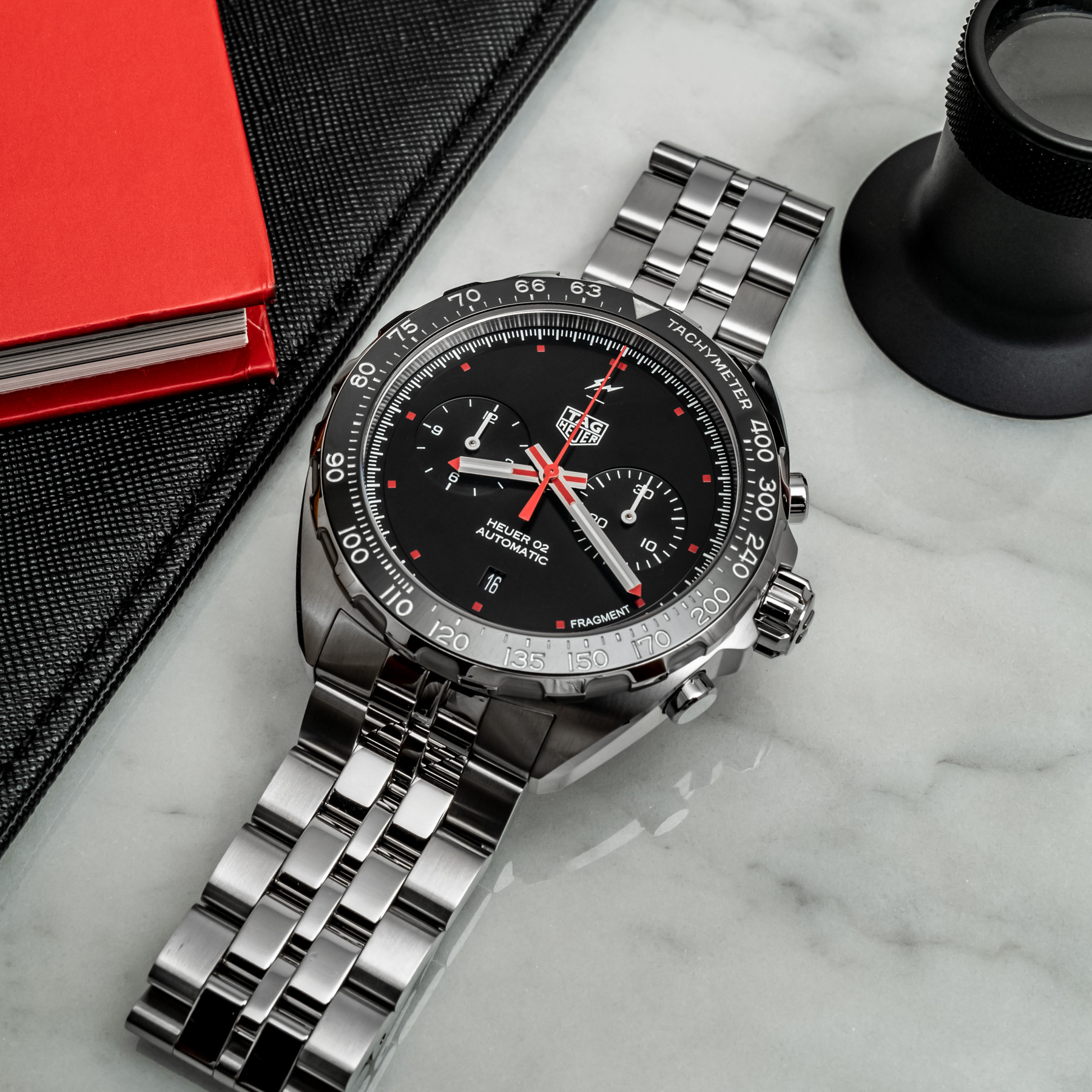 This is TAG Heuer’s second collaboration with Japanese streetwear brand Fragment Design founder Hiroshi Fujiwara, the first of which came back in 2018 with the Fragment Design Carrera Heuer 02. I actually thought I misread the release initially when this new piece dropped back in June, as the Formula 1 collection tends to lean in a very different direction, design-wise. But not only is it in the Formula 1 family, it’s the first-ever model in the collection to use the top-end Heuer 02 movement. 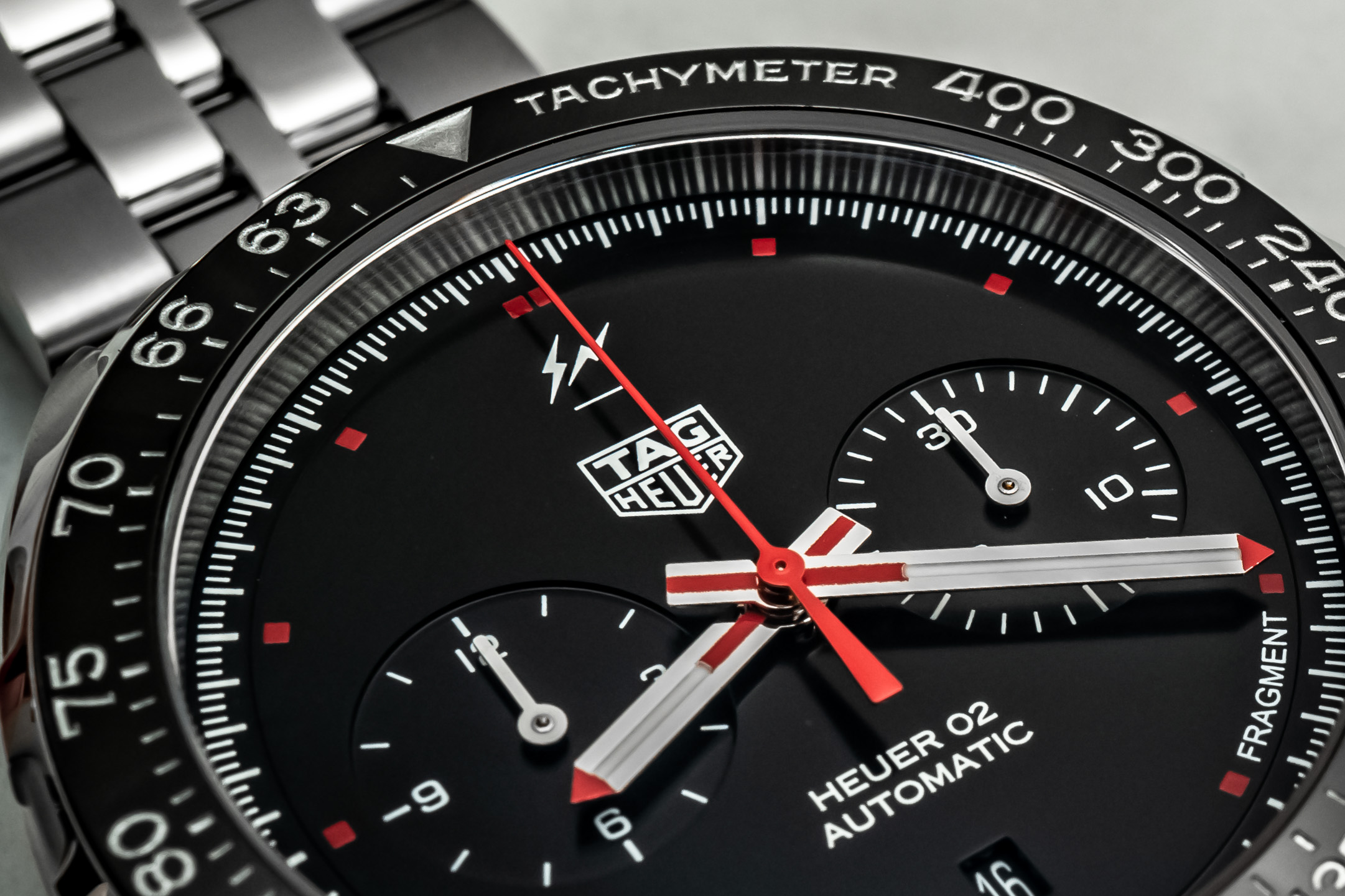 Being in the Formula 1 family frees the Fragment Design Heuer 02 from the historical expectations and distinct scrutiny that would come with the Autavia designation. Plus, the Autavia family isn’t really a racing-oriented collection at all anymore, if you haven’t noticed. If part of the long term play here is to have pricing that runs the gamut from entry-level to higher within each collection, rather than the Formula 1 being saddled with the “entry-level collection” designation, then I’ve got to give kudos to the TAG Heuer team for seeing it through so successfully. 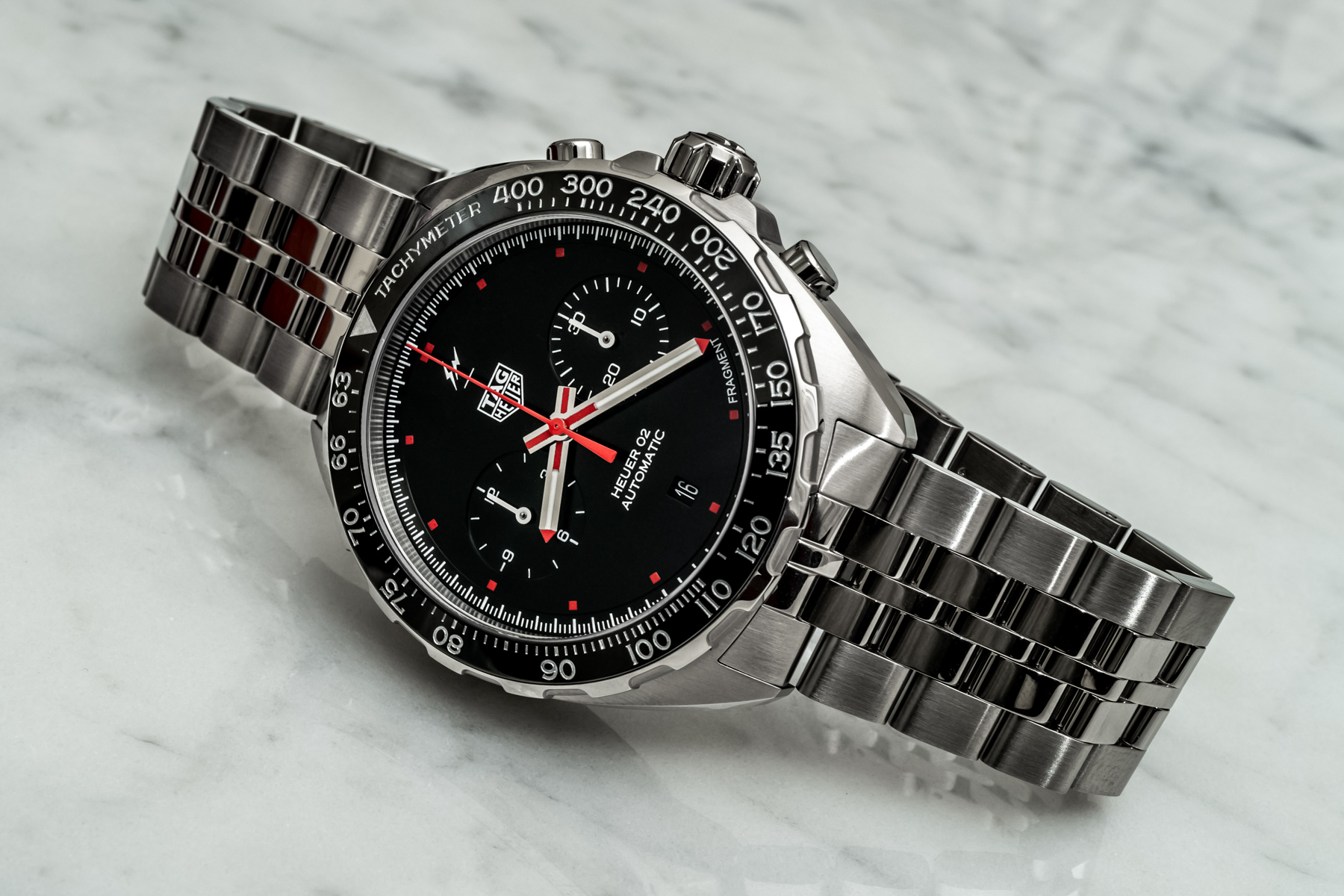 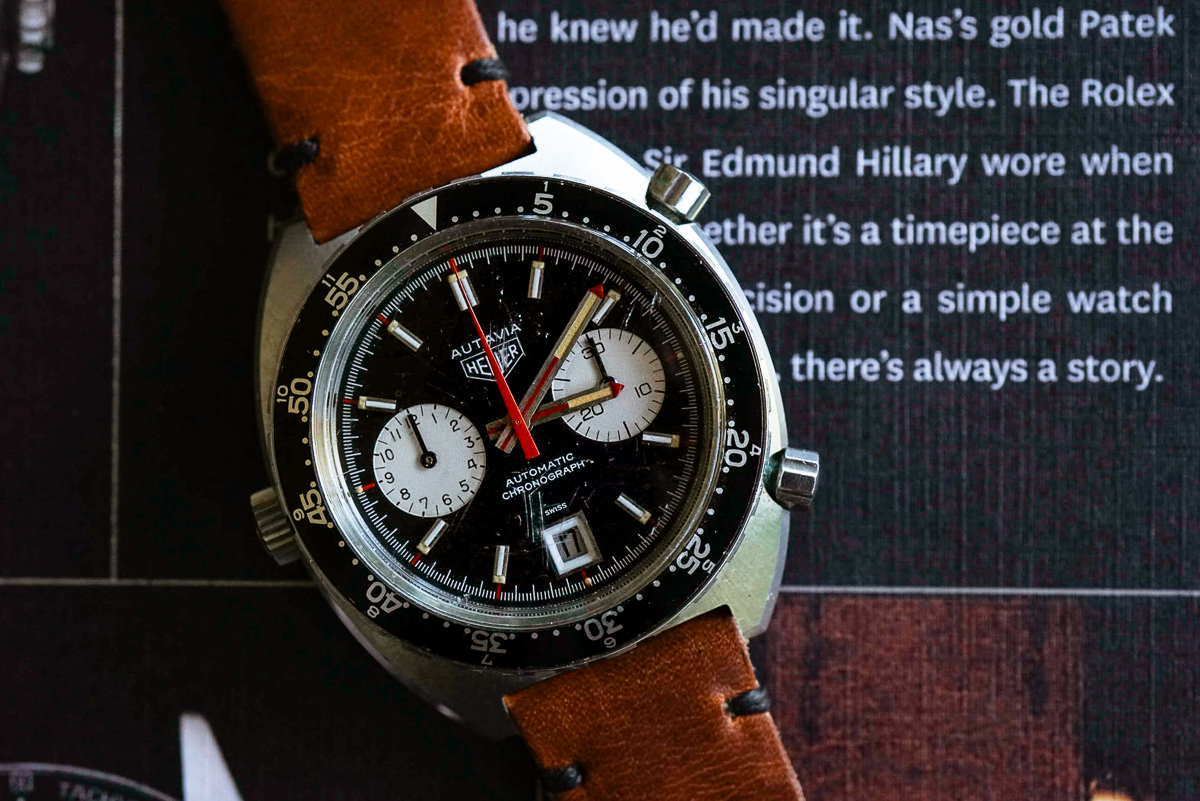 The Fragment Design Heuer 02 does borrow some vintage Autavia elements, but the Formula 1 collection (which was refreshed five years ago in 2015) already shares quite a bit with the third-generation Autavia from the late 1960s. The original Autavia chronograph had a traditional round case from its debut in 1962 through 1969 when we saw the introduction of the now-iconic C-shaped case, characterized by a slightly oblong case with integrated lugs. The current Formula 1 case borrows heavily from this generation of Autavia, specifically the old Heuer “Viceroy” Autavia 1163, which most heavily inspired the design of the Fragment Design Heuer 02 with its black/red color scheme and twin register layout. 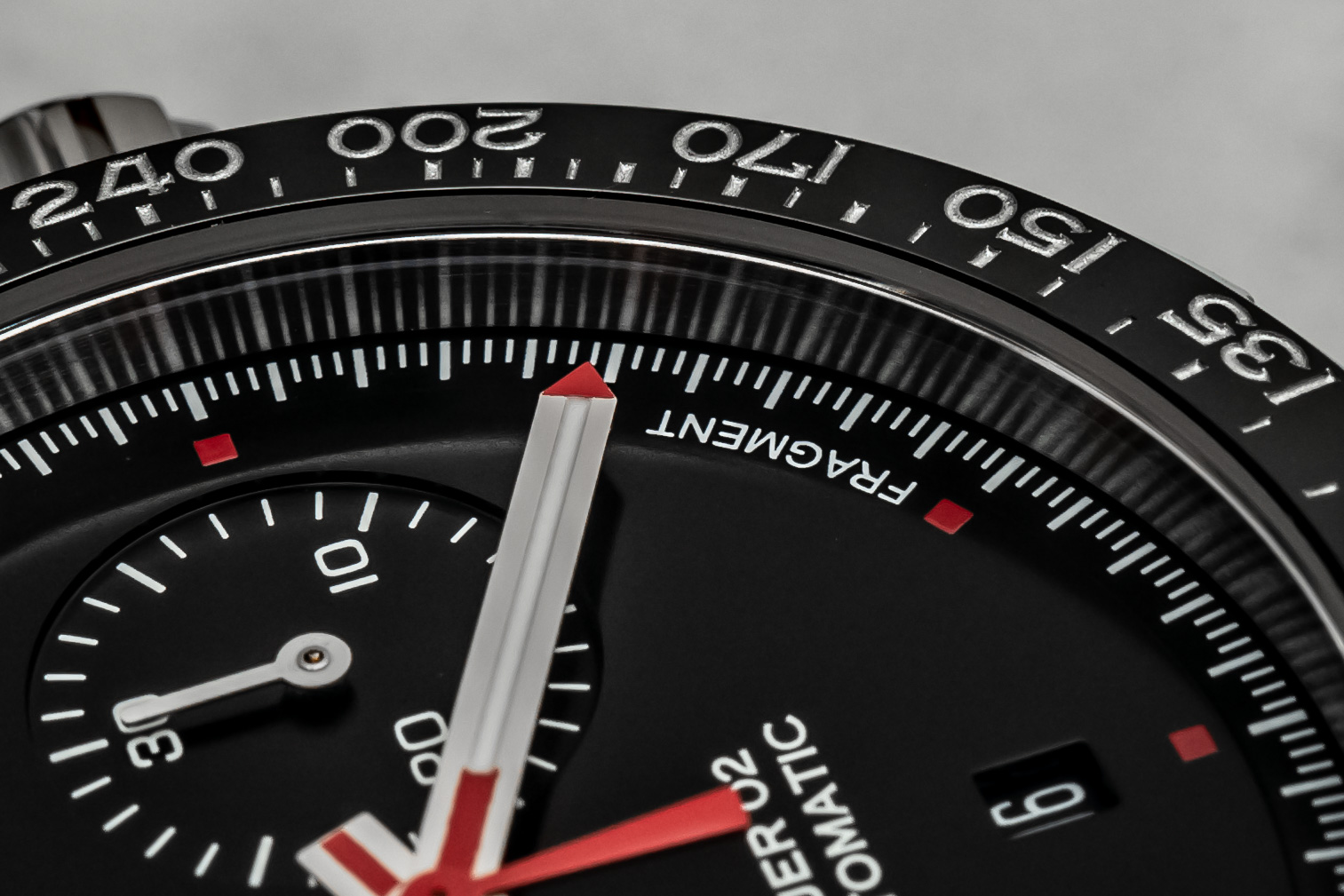 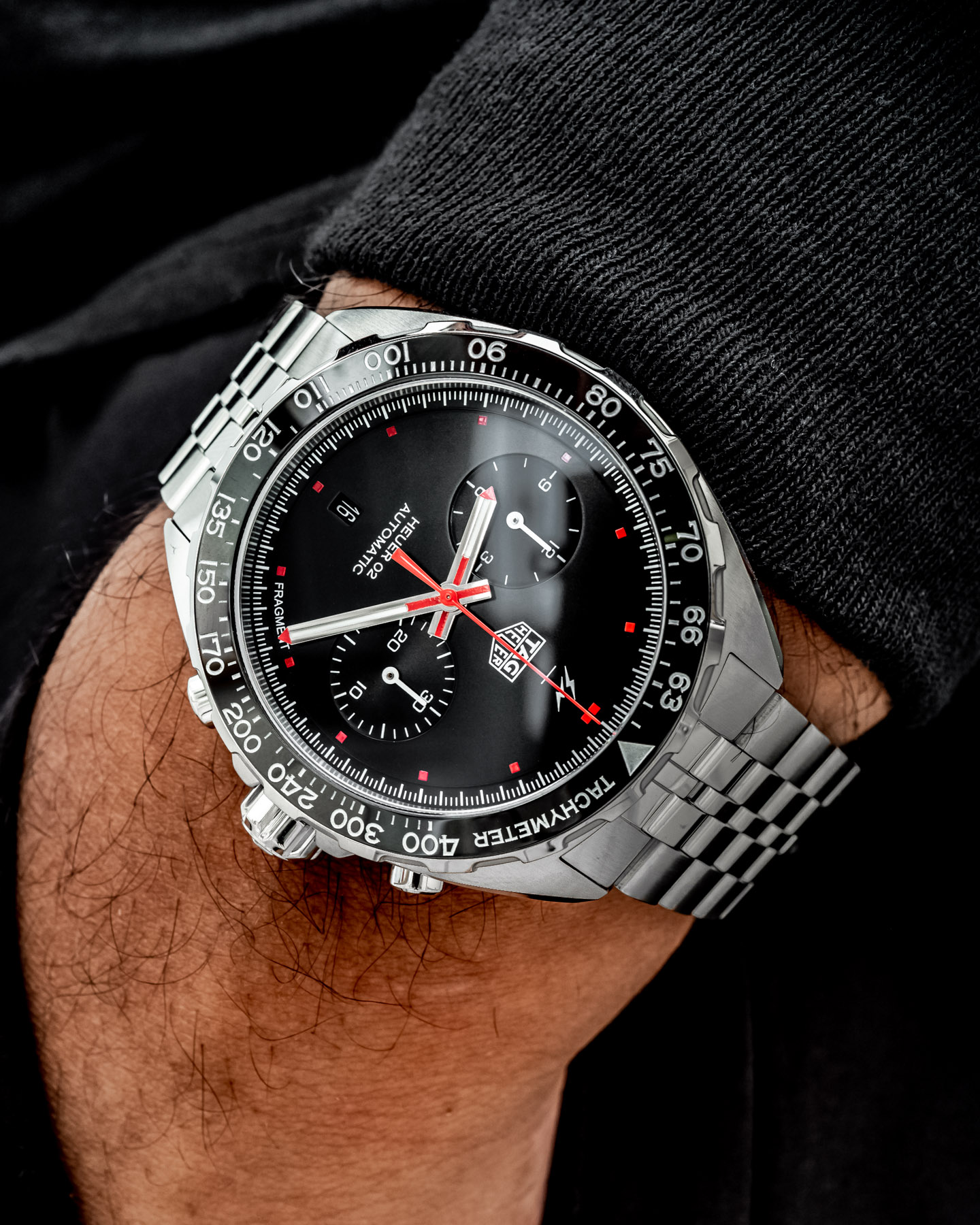 Though it measures 44mm-wide, the lugs of the C-shaped case keep the lug-to-lug height of the Fragment Design Heuer 02 at a very reasonable 49.5mm (the case is 14.2mm-thick). While this is a Formula 1 case, there are touches that distinguish it from the standard production models in the family. The polished beveling alongside the case is subtle and effective, the ceramic bezel with vintage-style tachymeter scale, and, of course, that red sapphire crystal exhibition caseback and Heuer 02 movement are all touches that are a step above what you’d ordinarily find in a Formula 1. And this is to be expected as the Fragment Design Heuer 02 is just about twice the cost of the most expensive Formula 1 watch. 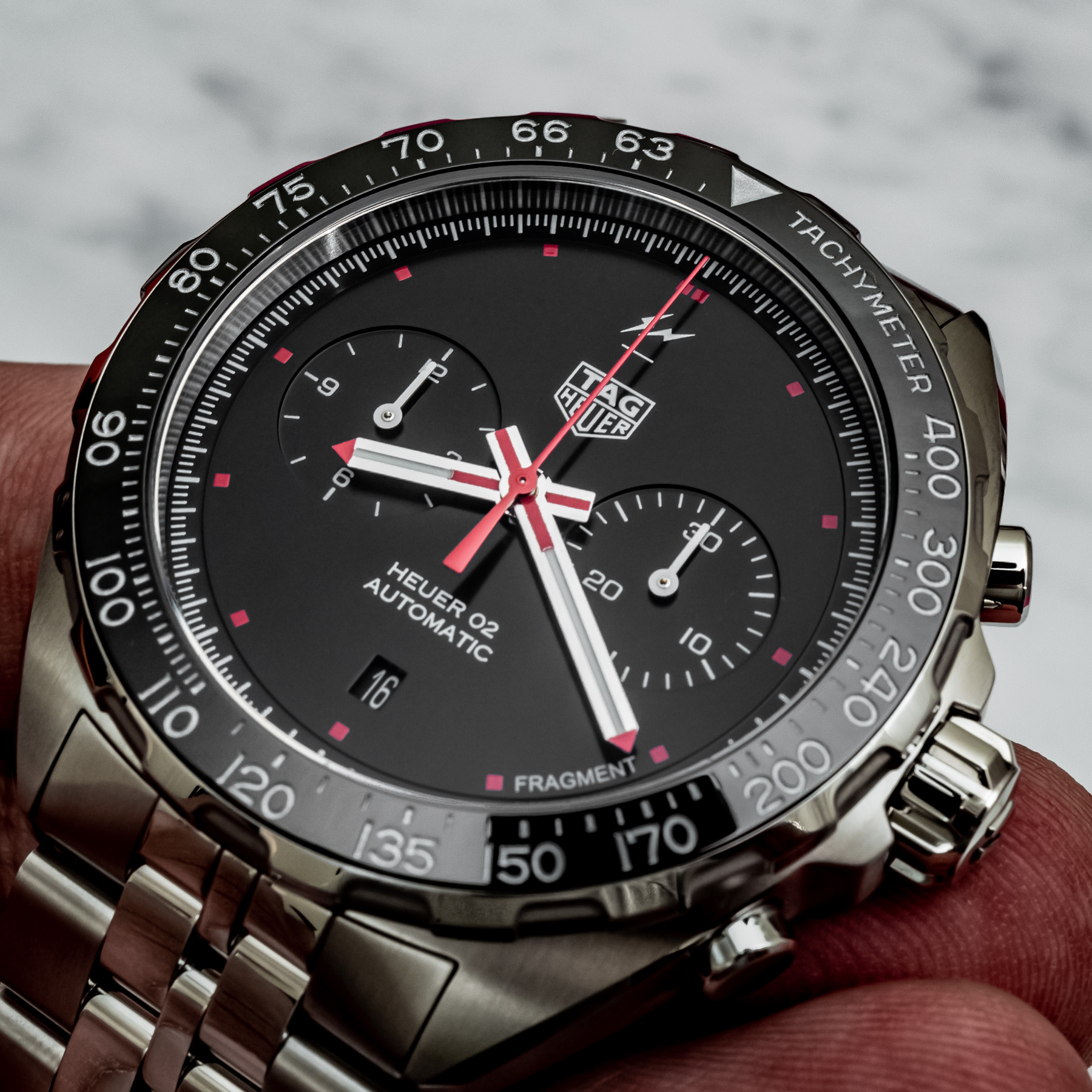 I know it’s sacrilegious for a watch in the Formula 1 family, entirely flies in the face of TAG Heuer’s racing chronograph heritage, and would never happen, but… I would love to see this watch with an all-black bezel sans tachymeter scale (hey, the bezel is already fixed, anyway). That said, I am just happy they demonstrated wise restraint in keeping any red away from the bezel. 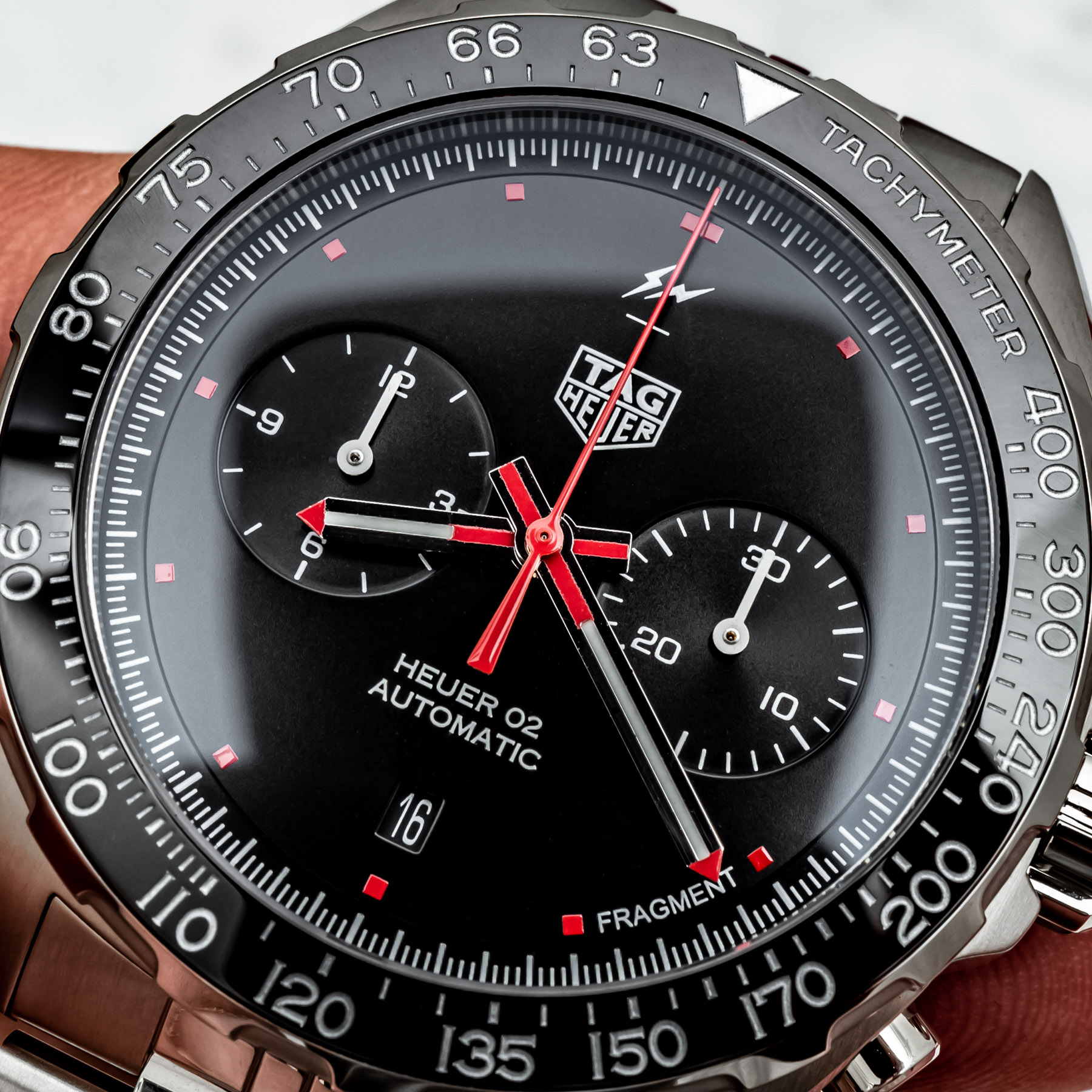 I wondered if the black opaline dial would be as striking in person as it was in the press photos, and I was not disappointed. If you look at the vintage “Viceroy” Autavia 1163, gone is the panda dial with white registers, applied hour markers, framed date window (though the date window itself remains at 6 o’clock). The twin registers look like black saucers gently dipped into an equally black and completely still body of water. I just love it. There is a remarkable and deliciously ironic stillness to the dial (assuming the chronograph isn’t running) that is difficult to convey via photography. With no running seconds hand, no applied indices, and no hint of a concentric circle or guilloché pattern to be found, much of the black dial feels like the aphotic zone of a body of water interrupted by the occasional touch of red or white. As for the hour, minute, and chronograph hands, they are nearly identical in design to the “Viceroy” Autavia 1163 and simply look *insert chef’s kiss emoji here.* 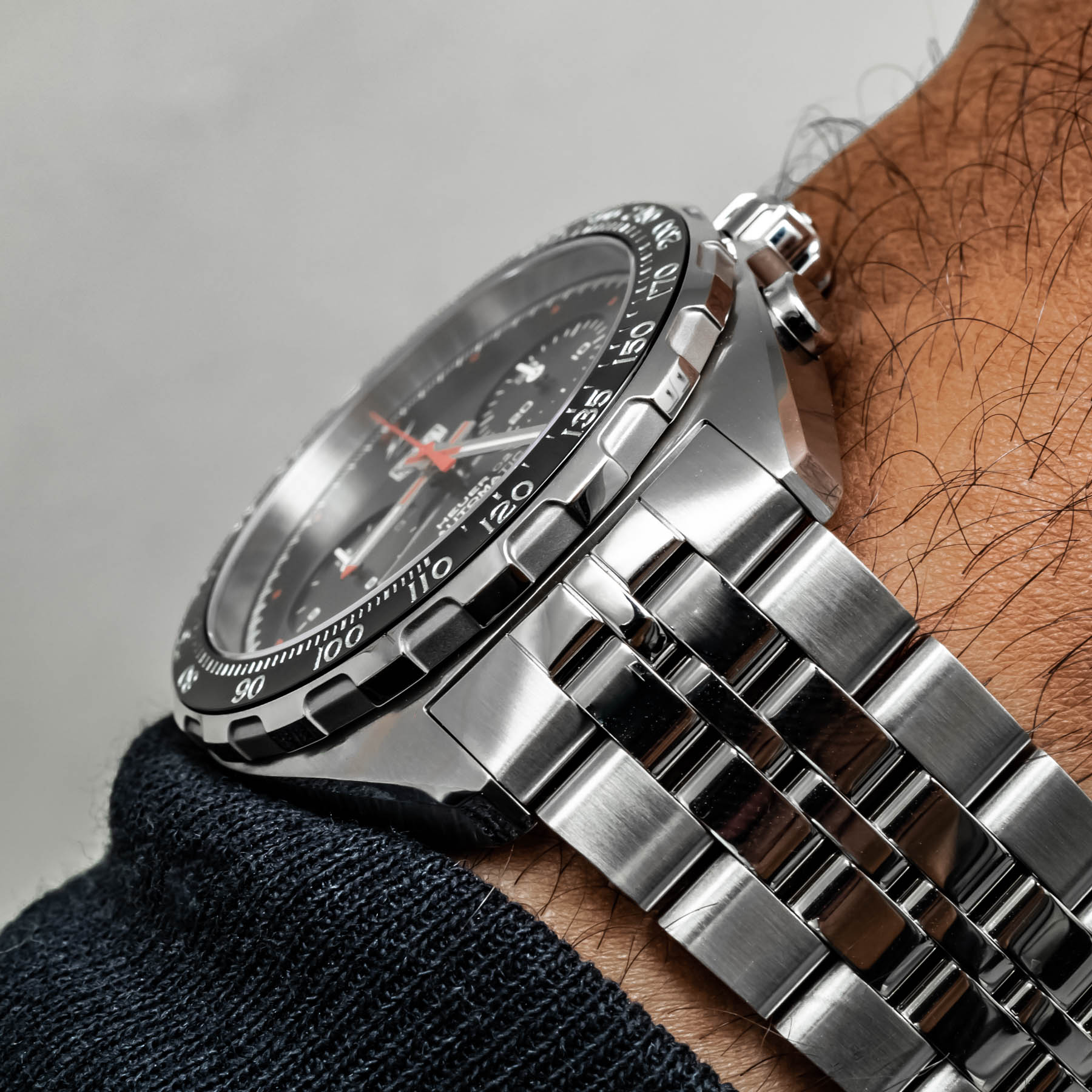 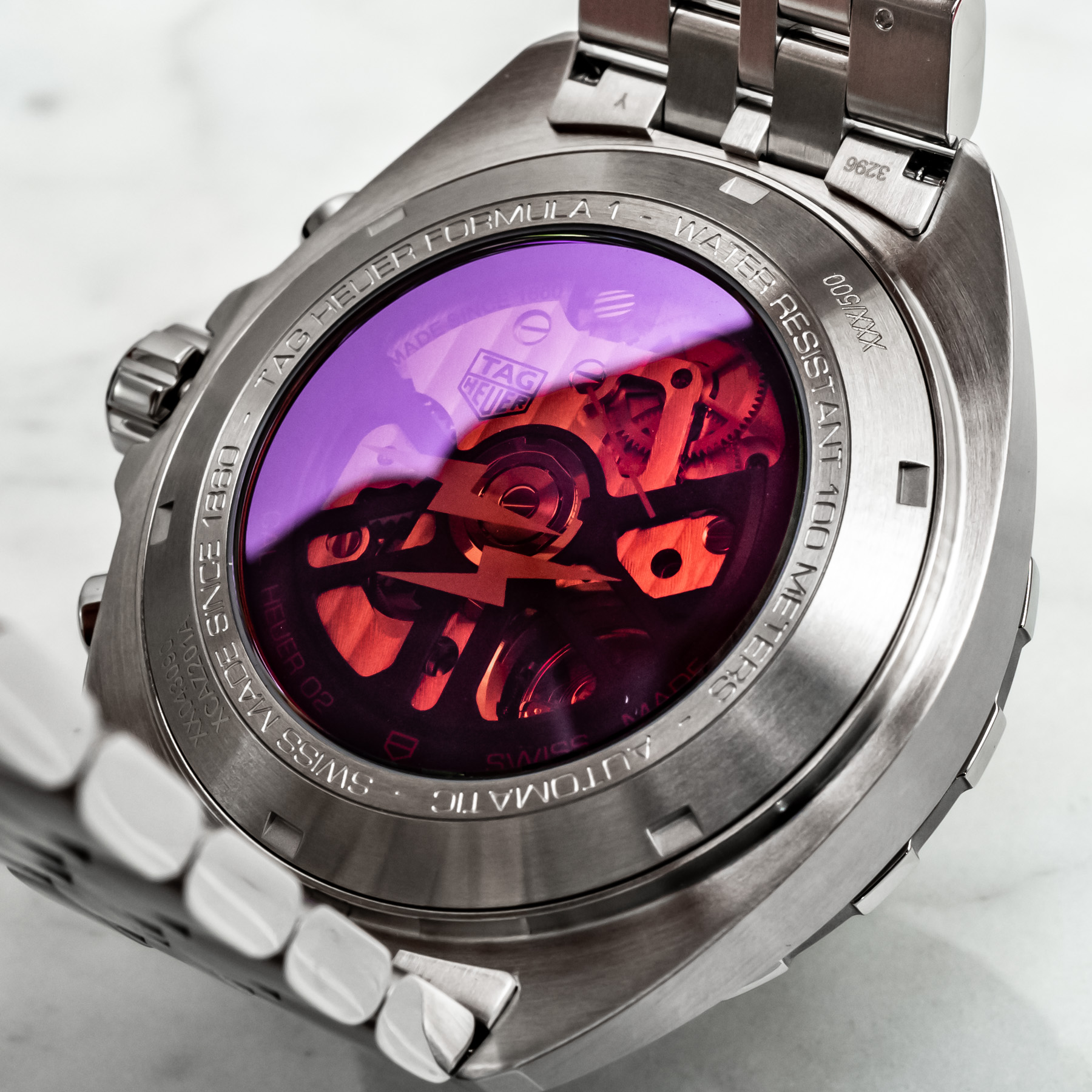 The Calibre Heuer 02 is TAG Heuer’s in-house, modern, fully integrated chronograph that was rolled out back in 2017. As I previously mentioned, this is the first time the Heuer 02 has been used in a Formula 1 collection watch, and I’ll bet it won’t be the last time. The standard movement has a seconds subdial at 6 o’clock, which was removed for this piece with its twin register layout with the 12-hour subdial at 9 o’clock and 30-minute subdial at 3 o’clock. Again, this is just like the “Viceroy” Autavia 1163 (and other Calibre 11/12 chronographs). Using both a column wheel and vertical clutch, the Heuer 02 is mechanically impressive and has to be a serious consideration when looking at the price of the watch. Operating at 28,800 vph with an 80-hour power reserve, it’s accurate and doesn’t sacrifice a thing when it comes to power reserve.

The red sapphire caseback has been a divisive design point and I’m frankly pretty ambivalent about it. It’s certainly cool, uncommon to see, and contextually works with Fujiwara’s design. That said, I find myself not feeling strongly either way about it. 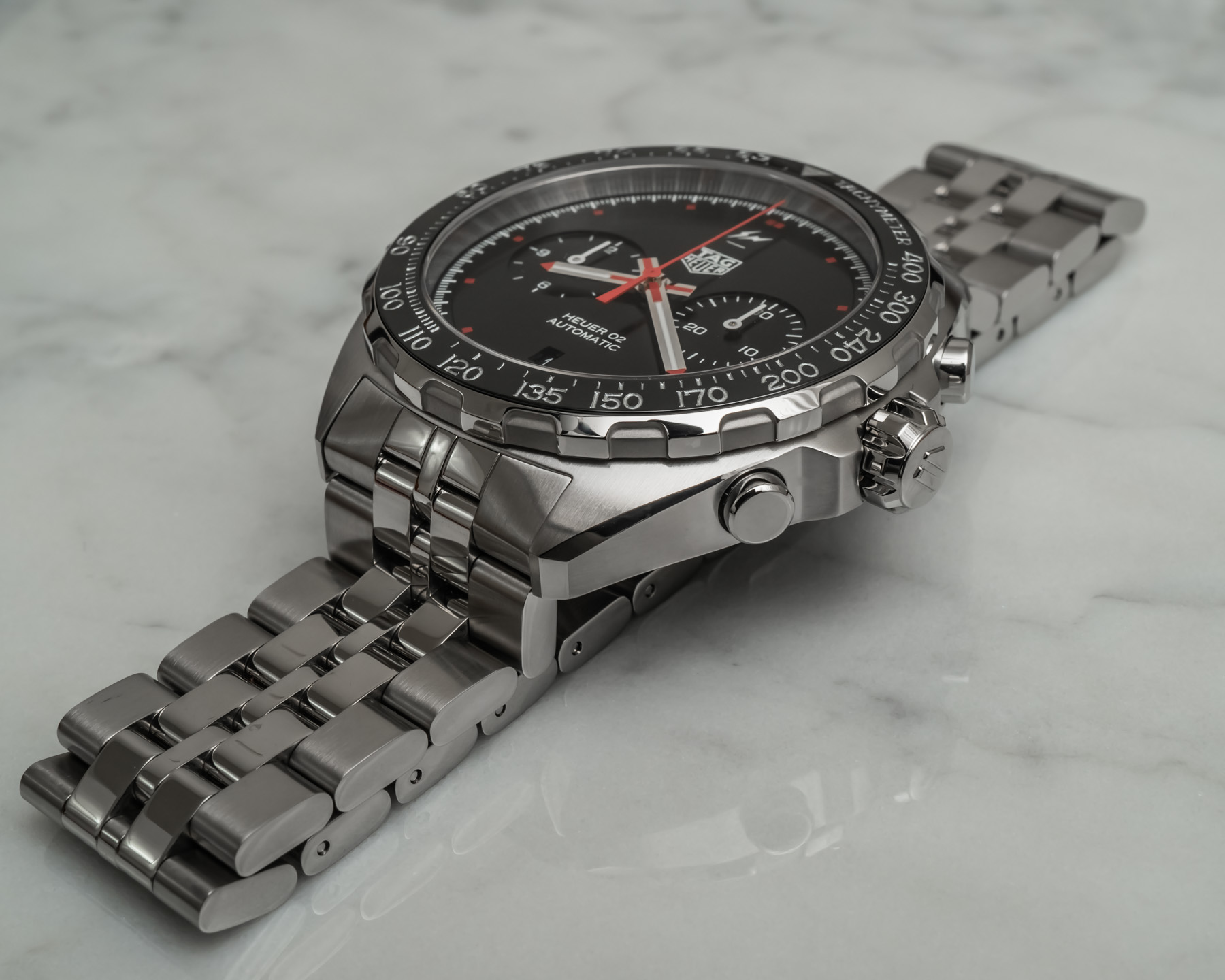 The bracelet for the Fragment Design Heuer 02 is actually a totally new five-link Jubilee style bracelet. It’s quite comfortable (no hair pulling, either) and the alternating brushed and polished finishes make for a nice touch. The clean butterfly folding clasp is refreshing, as there’s no branding or logo to be found. 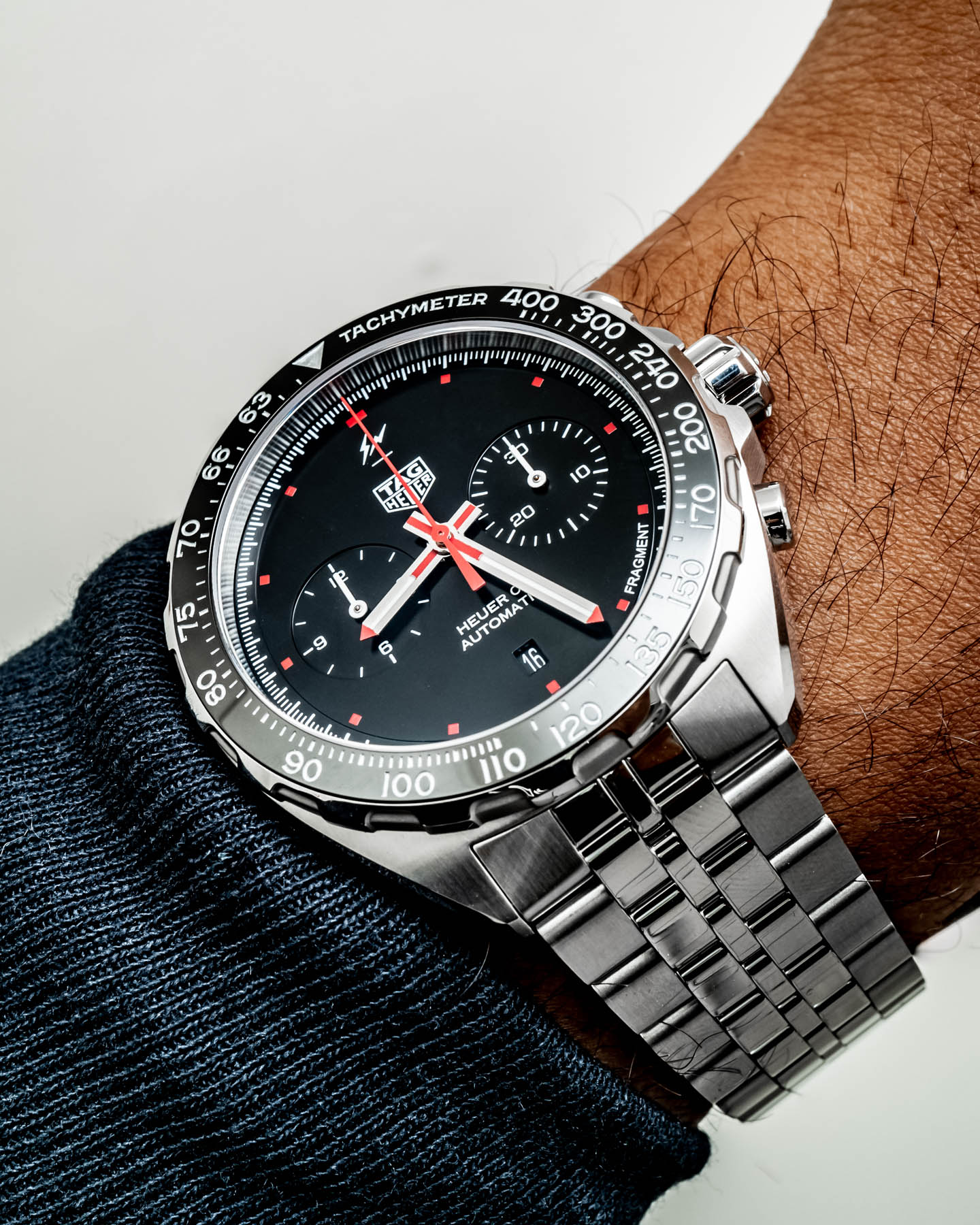 It’s a testament to TAG Heuer and Mr. Fujiwara that I never used the word “minimalist” to describe the Fragment Design Heuer 02. This watch strikes balanced simplicity through editing and shedding design elements that have been staples of Heuer chronographs, while giving them their due respect. I am a huge fan of the watch and can confidently say that it’s at the top of my list of chronographs released in 2020 (and perhaps significantly further back than that). Limited to 500 pieces, the TAG Heuer x Fragment Design Heuer 02 is priced at $6,150. You can learn more here at tagheuer.com.