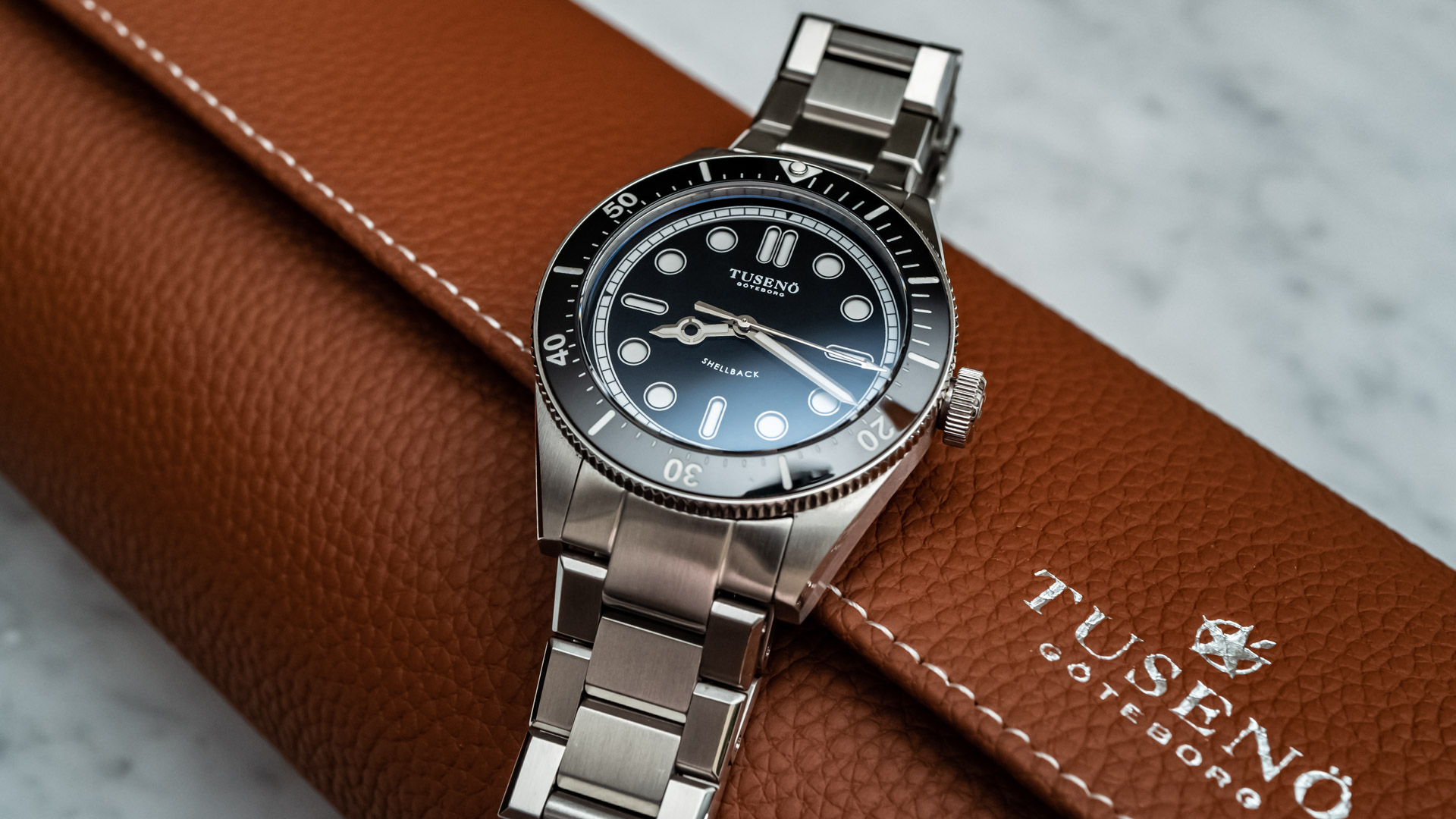 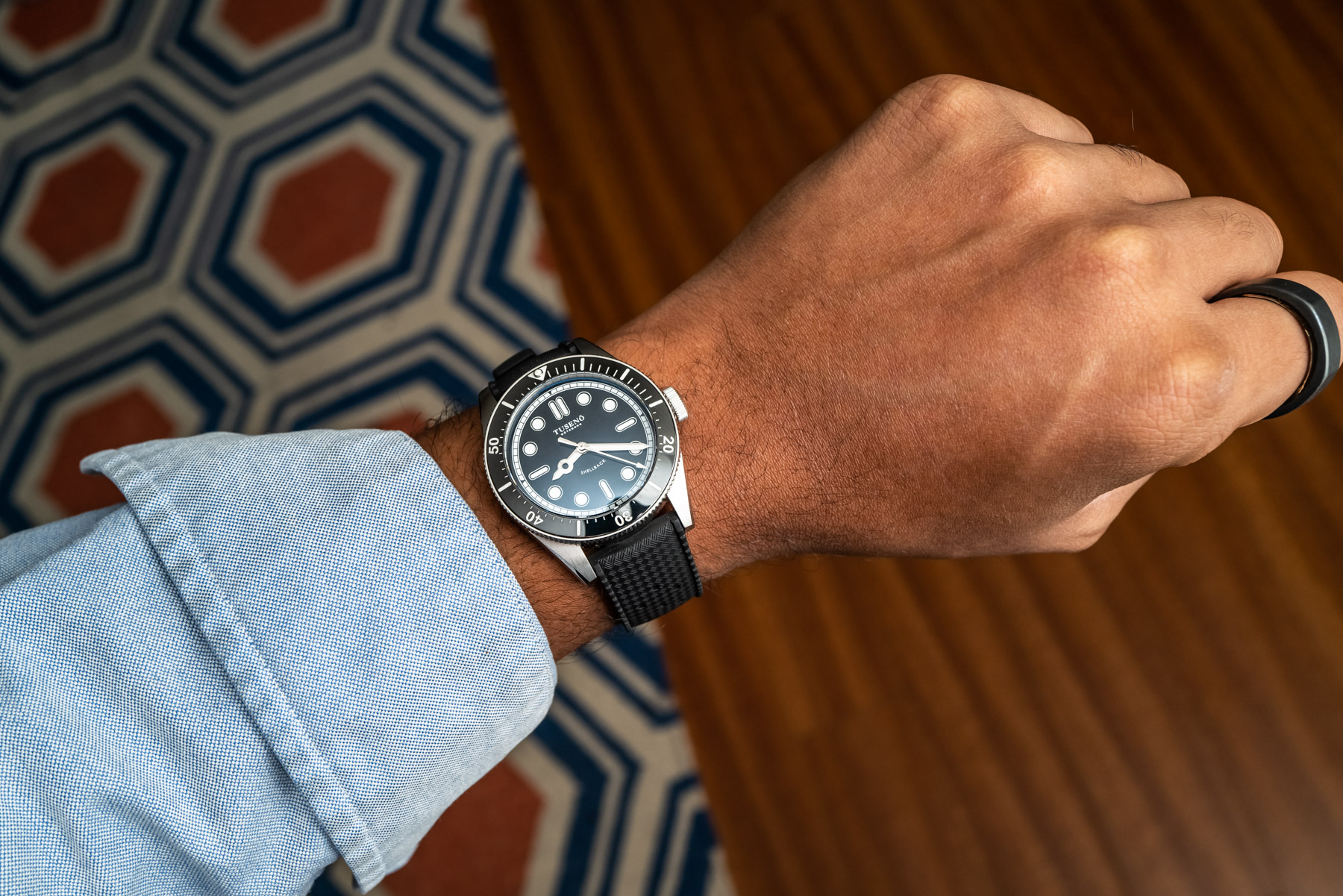 Like quite a few of you reading, my interest was piqued when I first read about the Tusenö Shellback a few weeks ago. So, when the brand offered to send me a sample to go hands-on with, I happily accepted. Though it’s a Swedish microbrand, Tusenö watches are indeed Swiss-made and have a keen sense of design and an understanding of what enthusiasts tend to like. While not doing anything especially new or groundbreaking, the Shellback succeeds at offering a classically attractive dive watch that sets itself apart in a very crowded space with wonderfully executed design touches. The phrase “value proposition” is tossed around pretty frequently, but anyone looking for a versatile dive watch for substantially less than $1,000 should keep reading. 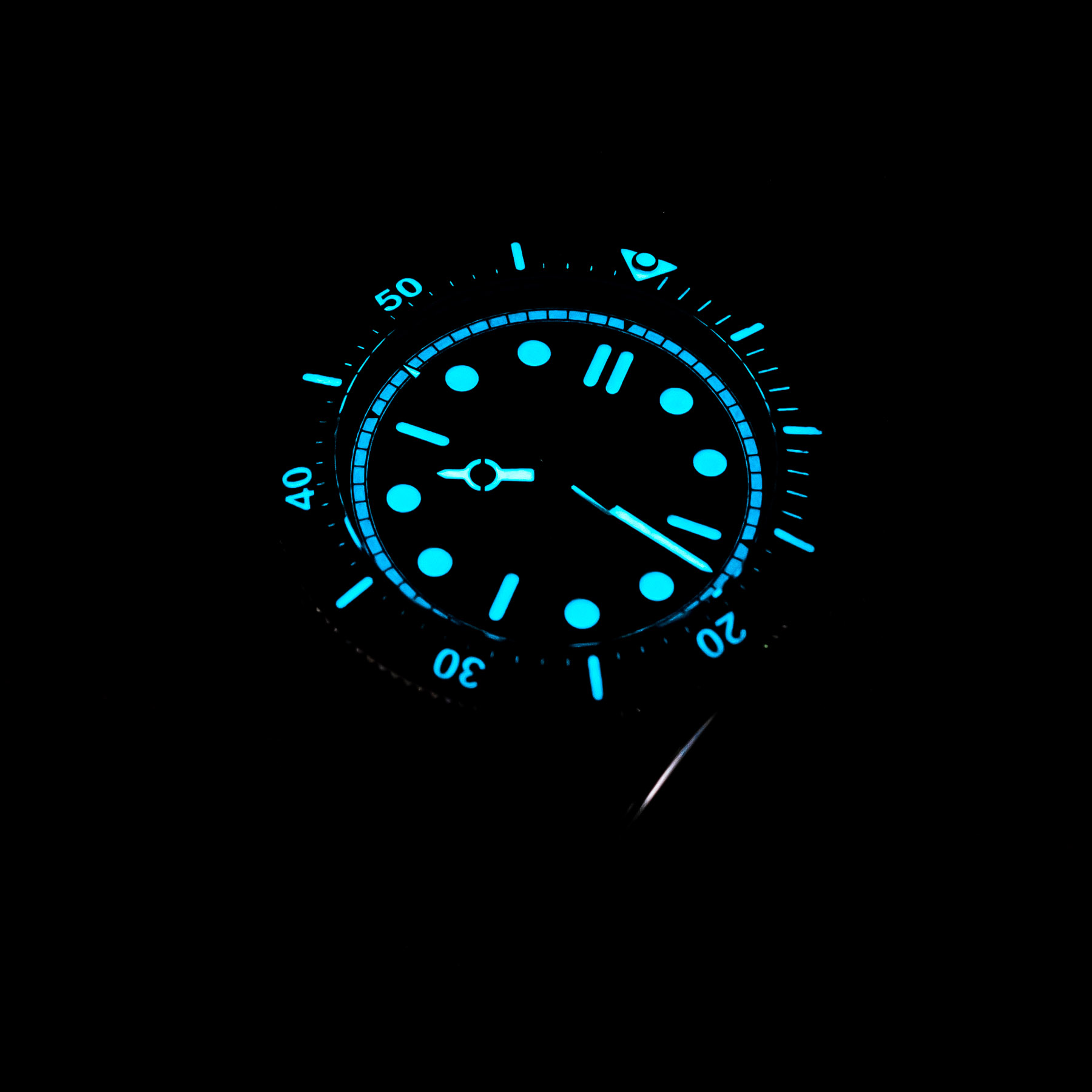 We may as well start with the case, measuring 40mm-wide with an approximate 47mm lug-to-lug height and a case thickness of 11.9mm that is more like 13 when considering the domed sapphire crystal. Just in terms of sizing, I believe the Shellback is very close to the outgoing 40mm Submariner, which is another way of saying that the case is about as universally acceptable as it gets. 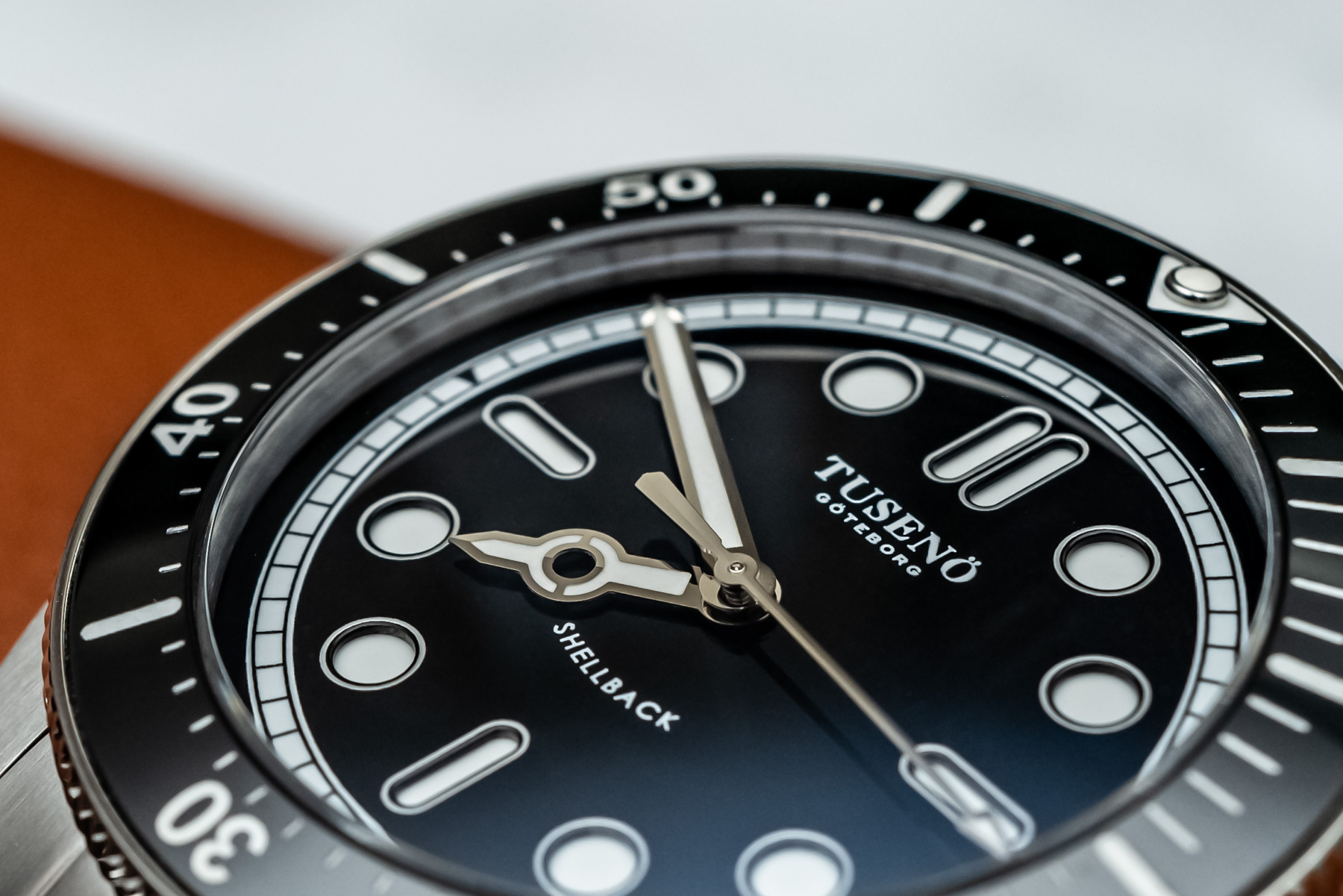 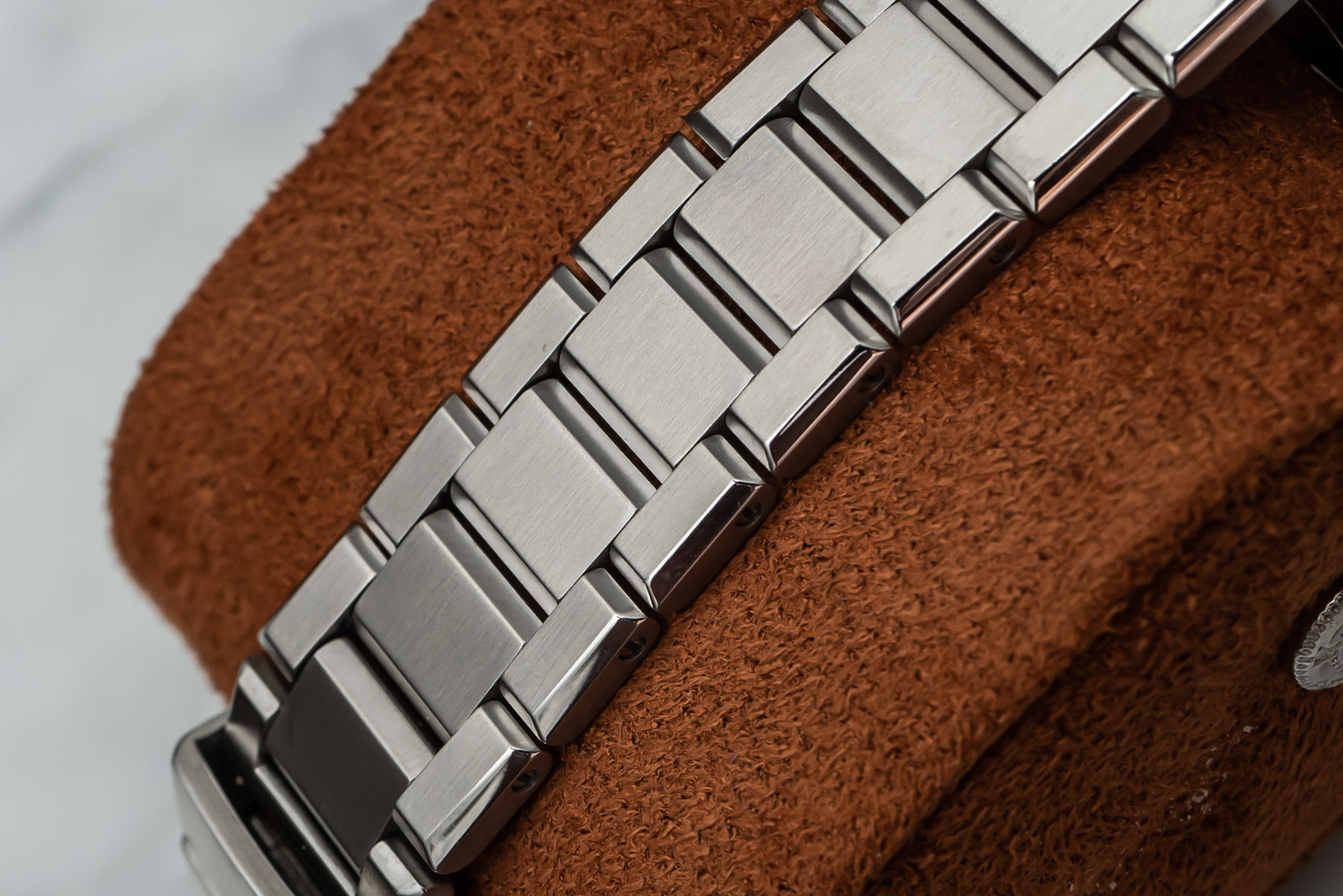 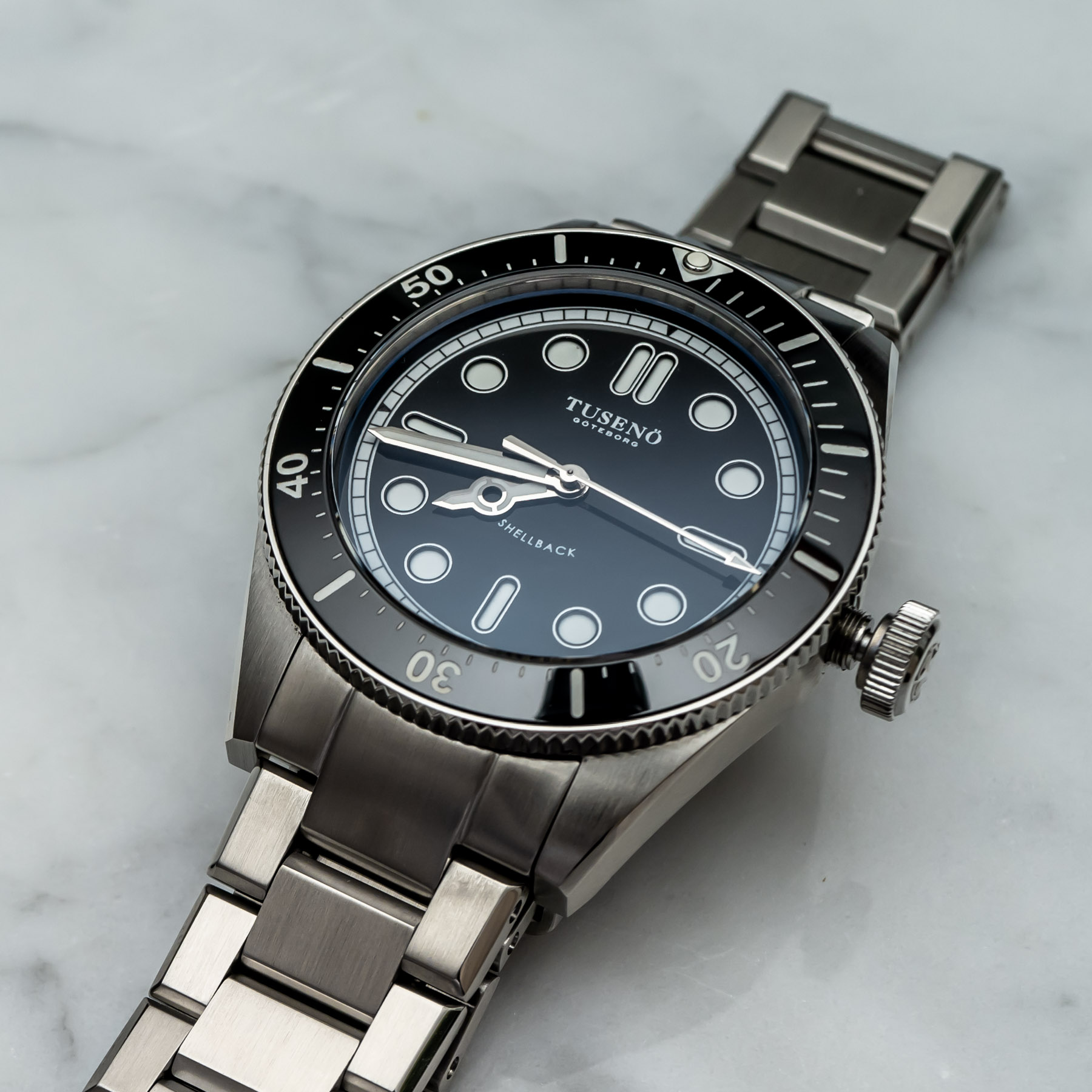 I should mention that the Shellback I spent time with is an early model, and the brand is making some changes to it. This bracelet has solid end links that inflate the lug-to-lug measurement to 52mm; the final production version will have a rotating connection for an even more comfortable fit. Johan Holsner, one of the founders and CEO of Tusenö, also noted that they are still testing out different bezel springs, as well. I found the bezel action to be pretty solid, though if I had to criticize it, I would say that it can be a little too stiff when operating. The benefit of the stiffness, of course, is that it stays in place and doesn’t inadvertently turn. 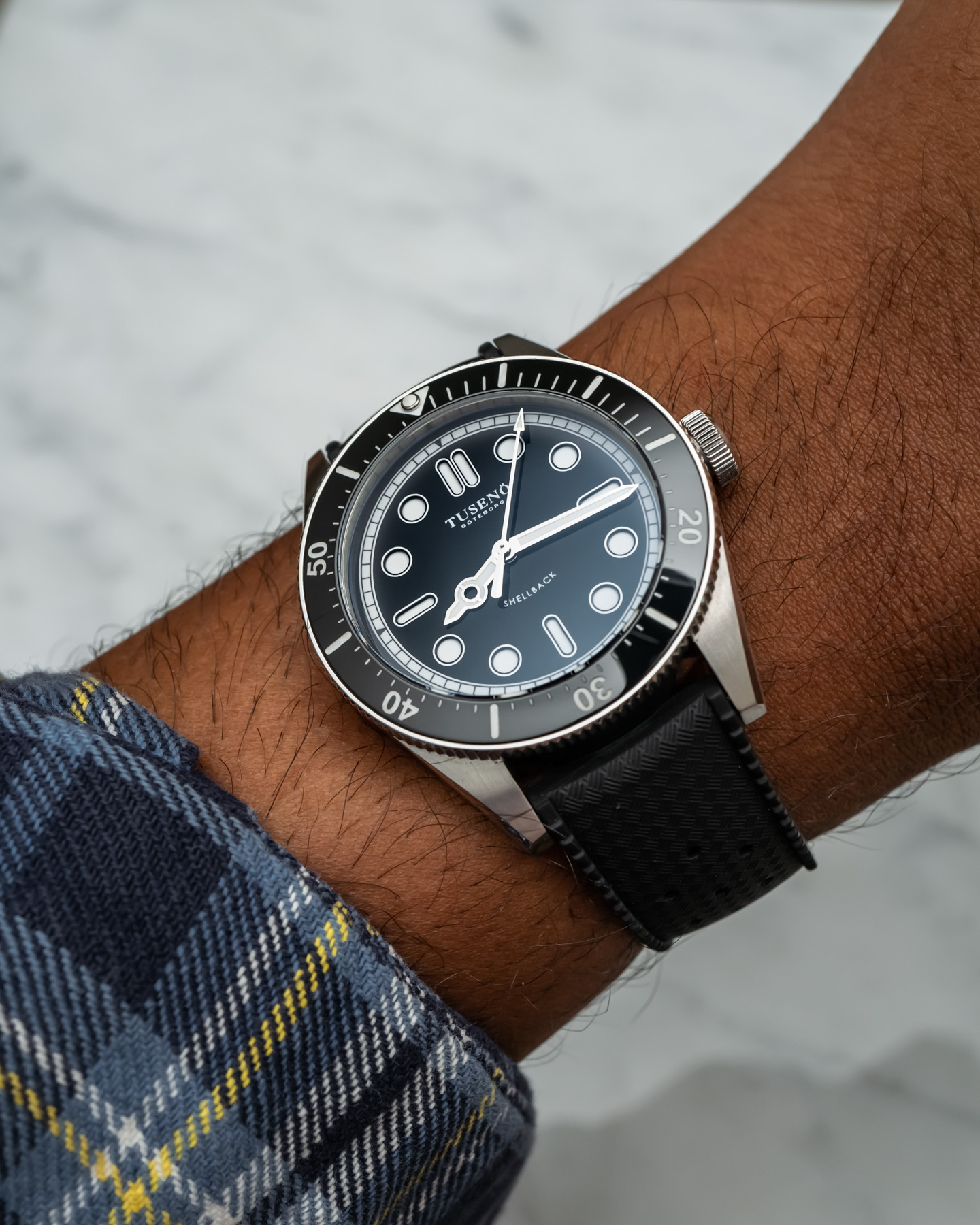 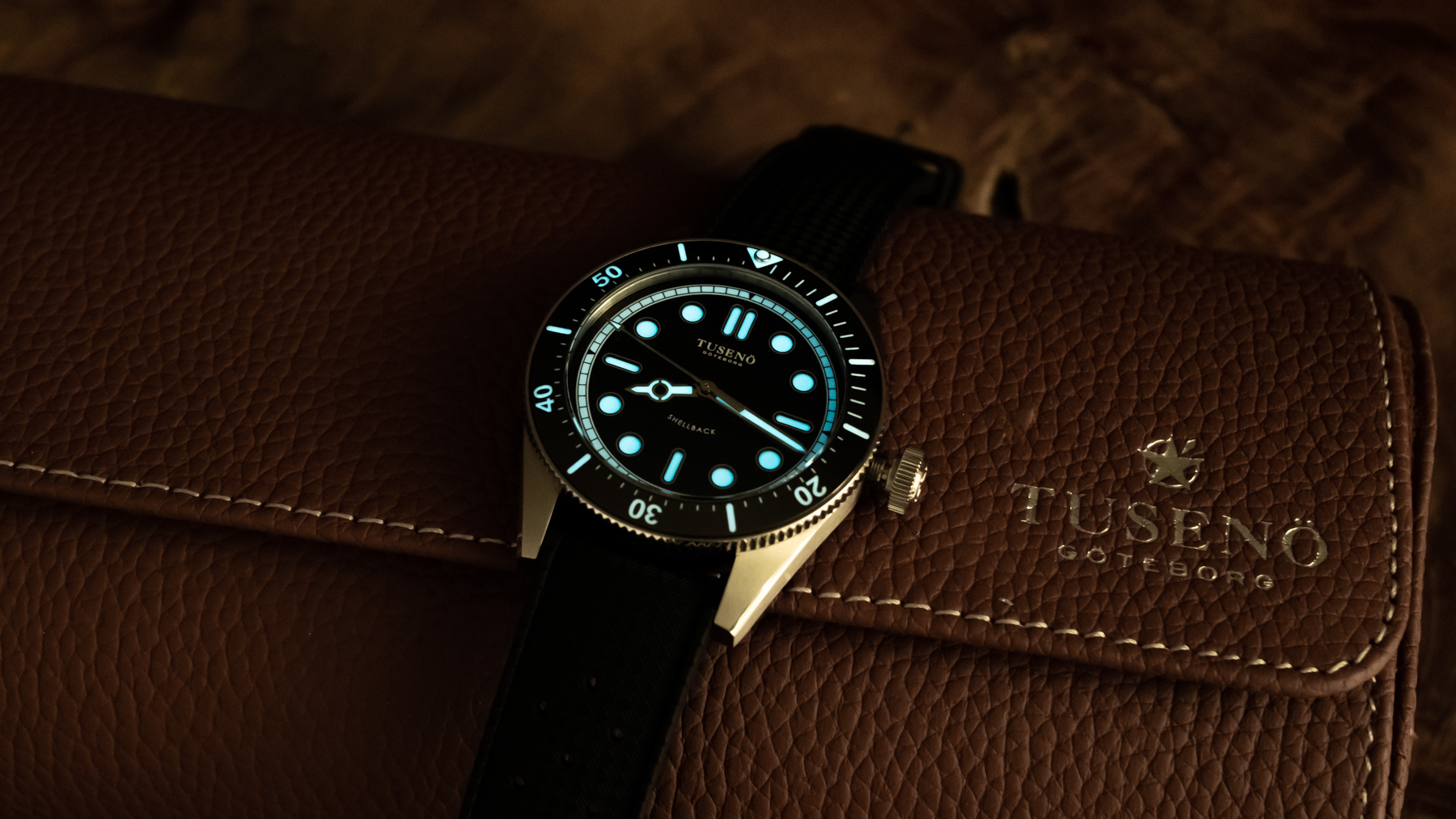 With an AR-coated sapphire crystal, the Shellback is available in blue or black with the option of a date window at 6 o’clock, seen here in the black no-date variant. I’ll venture to say that the sandwich dial is where much of the Shellback’s appeal lies, and that’s definitely warranted. It has a lumed disc on top of which is placed the glossy black (or brushed blue) dial with cutouts for circular hour markers and indices. Obviously, Panerai is most closely associated with these dials, though several other brands do it, too. (The Omega Seamaster 300 also does it quite well.) 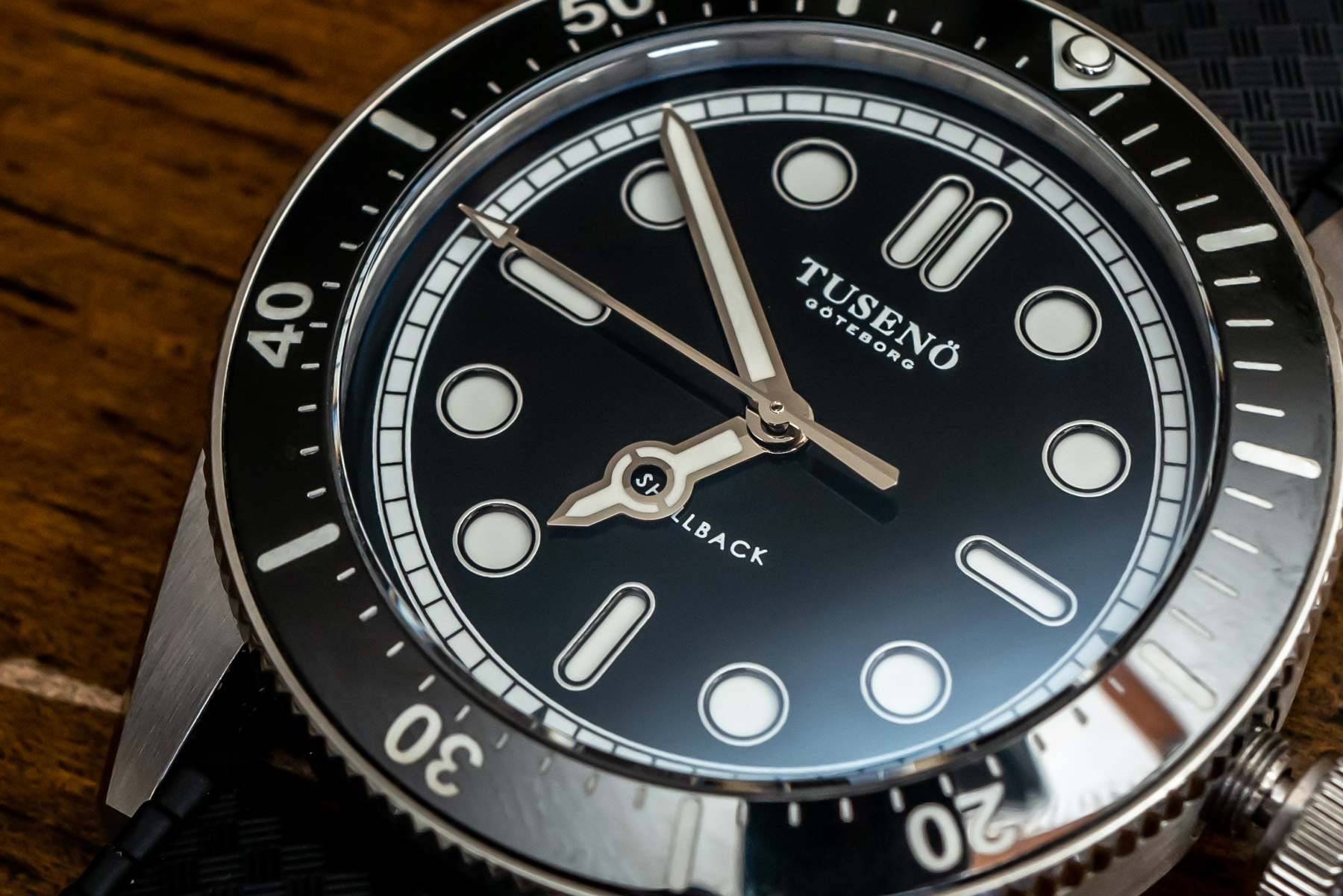 The lume is also applied on the bezel’s etched markings, as well as the hands, the former of which I also applaud Tusenö for. The seconds hand is capped with a lumed arrow, the tip of which extends nicely to the outer edge of the chapter ring. The minutes hand is nice and appropriately long, as well, and I genuinely like the novel shape of the hour hand. Indeed, the opening of the hour hand aligns with the “SHELLBACK” text at 6 o’clock, allowing the letters to be read as the hand passes by. It’s a nice and thoughtful touch that you don’t see much at this price point. 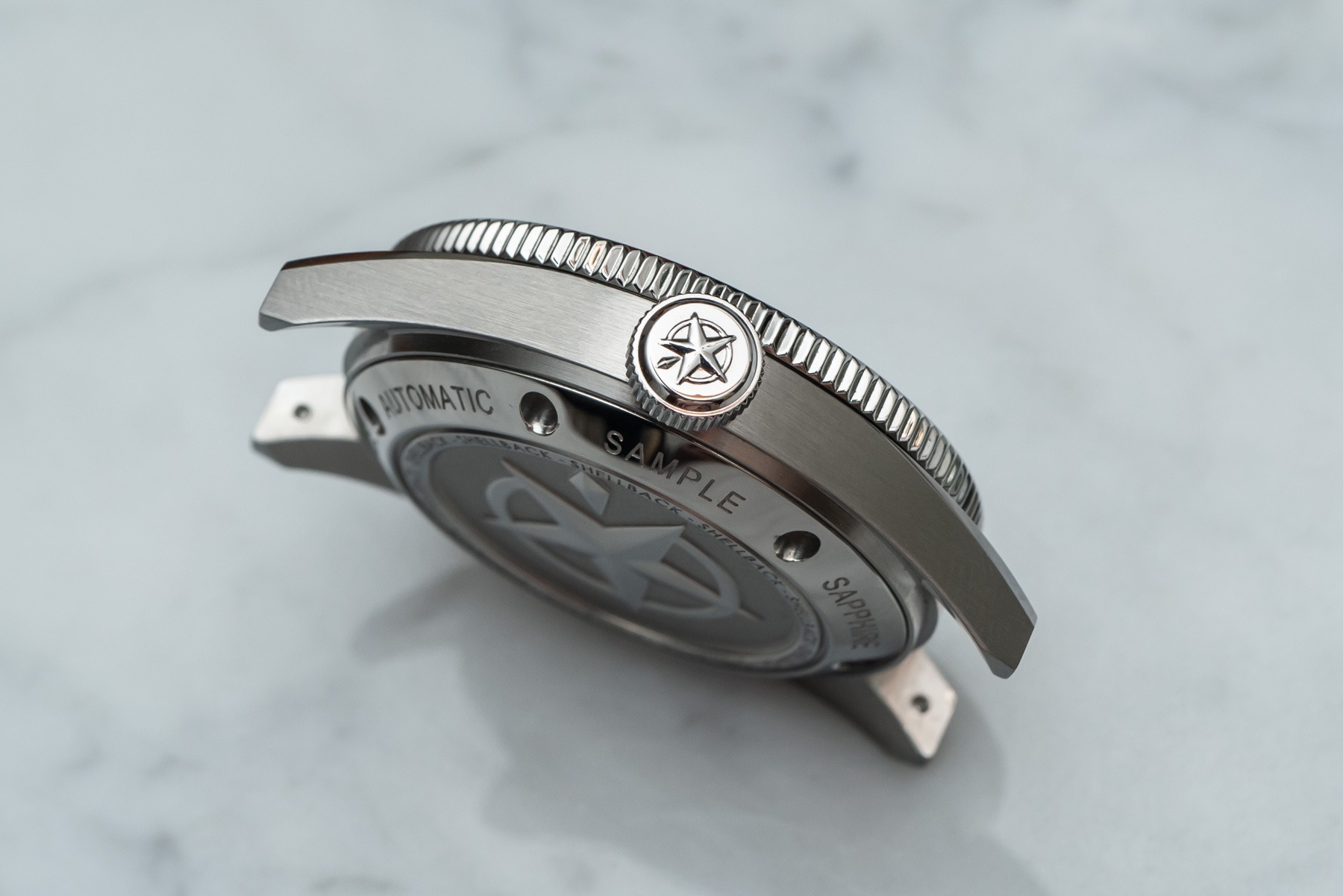 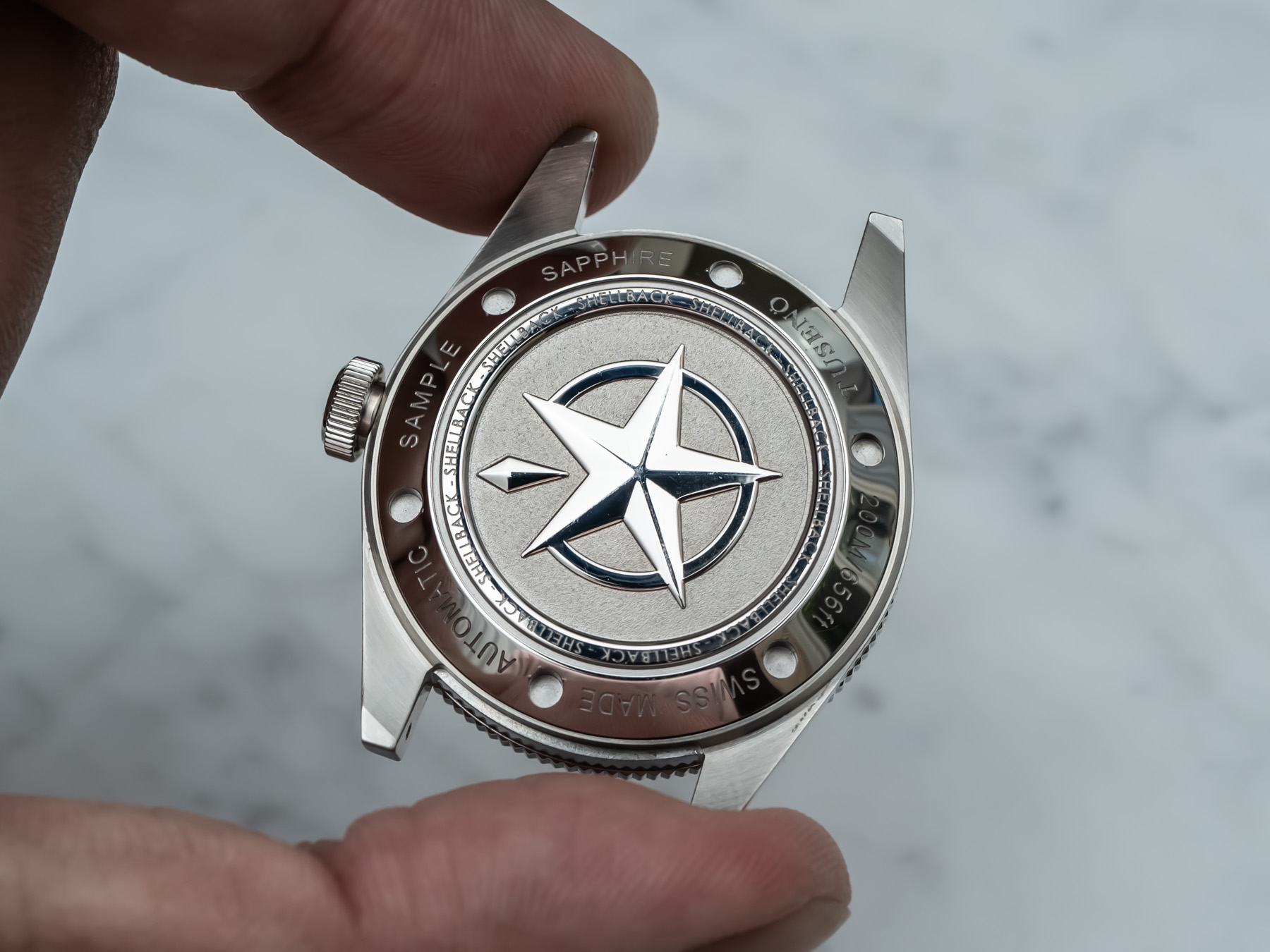 The screw-down crown is solid enough and easy to operate with a pull to the second position, activating the hacking seconds and allowing you to set the time. (I believe the first position is for setting the date for models that feature it.) Unscrewing the crown also allows hand-winding of the movement, which is something I wasn’t certain of with this Ronda movement. The minutes hand stays perfectly still when pushing the crown back in, something that, sadly, can’t be taken as a given. To achieve 200M water resistance, Tusenö opted for a solid caseback with a stamped star logo. I’ve always been a proponent of solid casebacks, as I don’t think a vast majority of movements really need to be displayed. 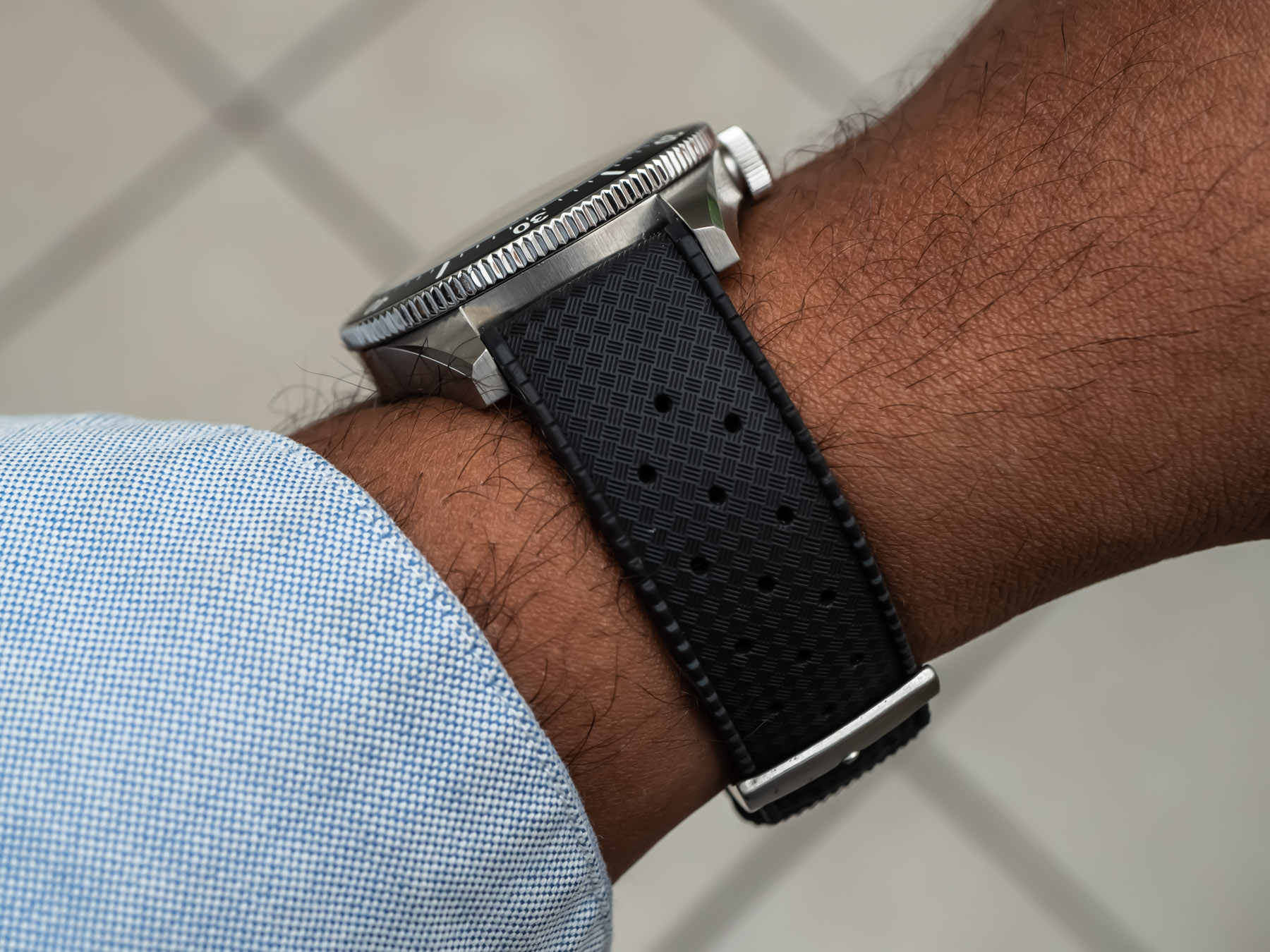 I have to admit that I don’t really have much personal experience with the automatic bi-directional winding Ronda Mecano Calibre R150 movement that the Tusenö Shellback is outfitted with. Released about six years ago, the Swiss-made Ronda R150 was designed as a direct and more affordable competitor for the ETA 2824 in addition to automatic offerings from Sellita, Miyota, etc… The R150 operates at 28,800 vph and has a 40-hour power reserve with an average variance of +/- 12 seconds/day and a  maximum variance of +/- 30 seconds/day. While Ronda is relatively new to the mechanical movement world, it has been around for decades and produces over 20 million quartz movements per year.

All this is to say that, while I can’t personally speak to the R150, I don’t see any reason to let it dissuade someone who otherwise likes this watch enough to get it. Plus, Tusenö has a two-year warranty on the Shellback. 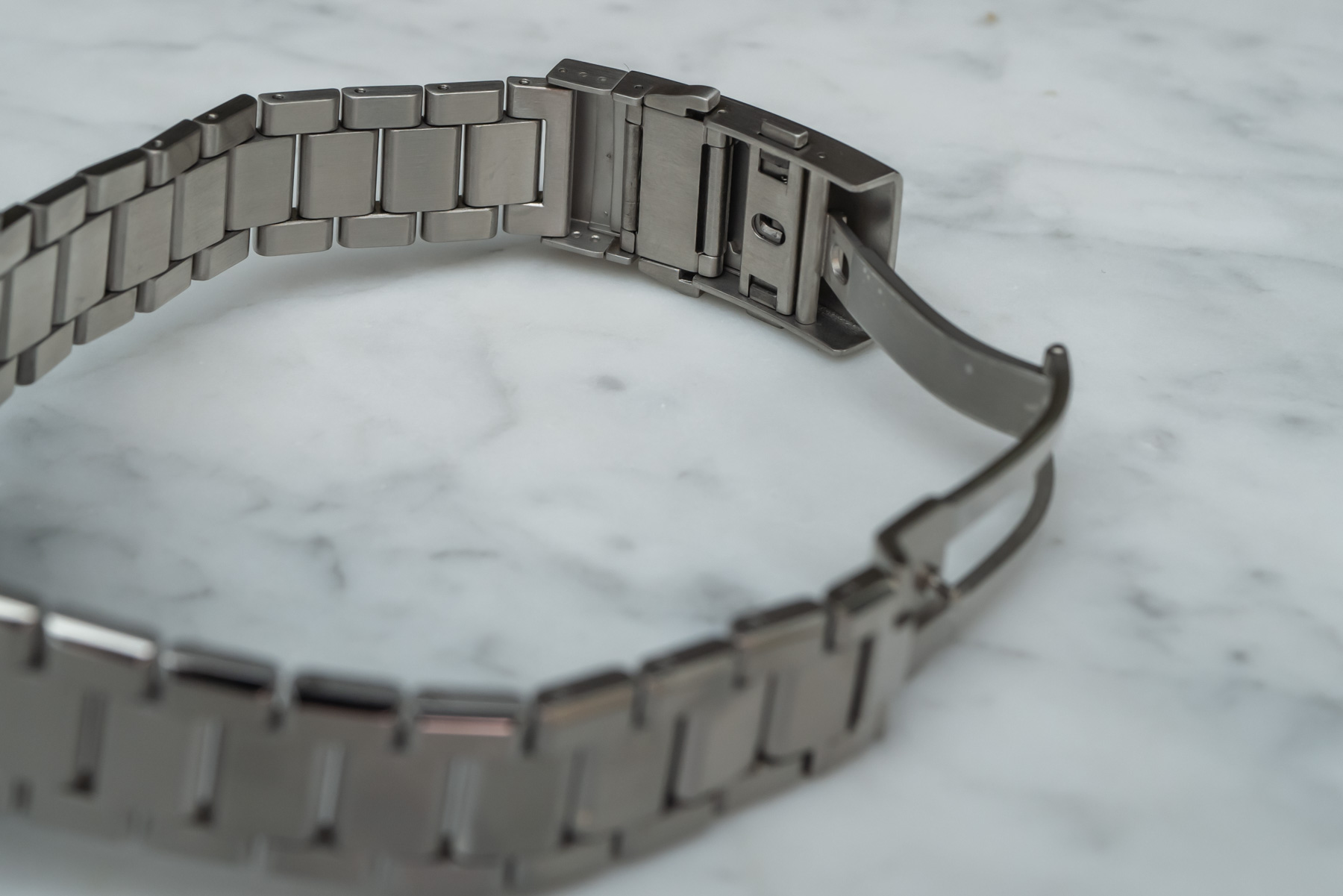 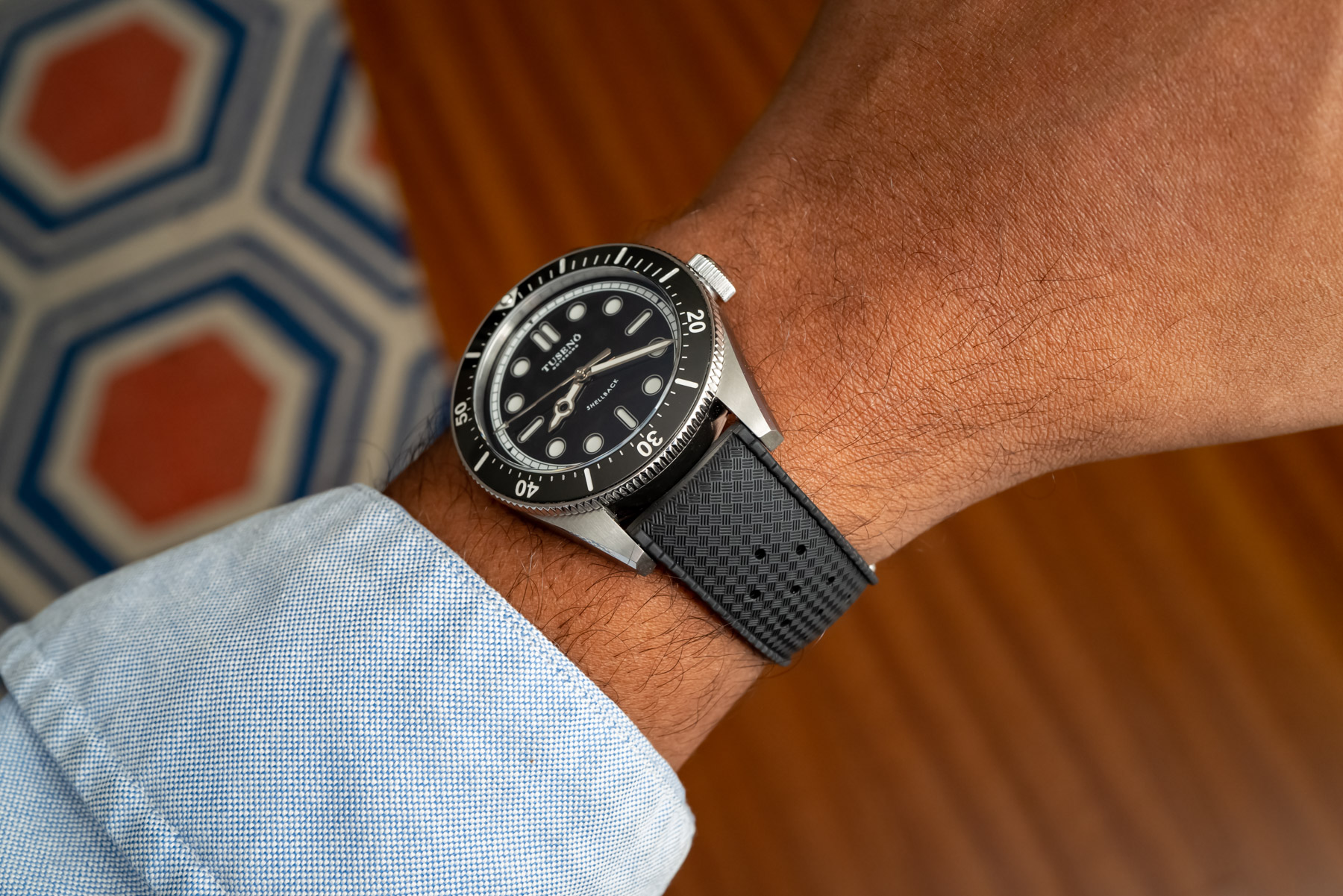 The Shellback comes with a steel bracelet, as well as a tropic rubber strap and a NATO strap, all with an easy-to-use quick-release system. The bracelet is nicely finished, pretty comfortable to wear, and it has an “on the fly” micro-adjust clasp, as well. Personally, I prefer the tropic rubber strap because, well, it’s August in Los Angeles. 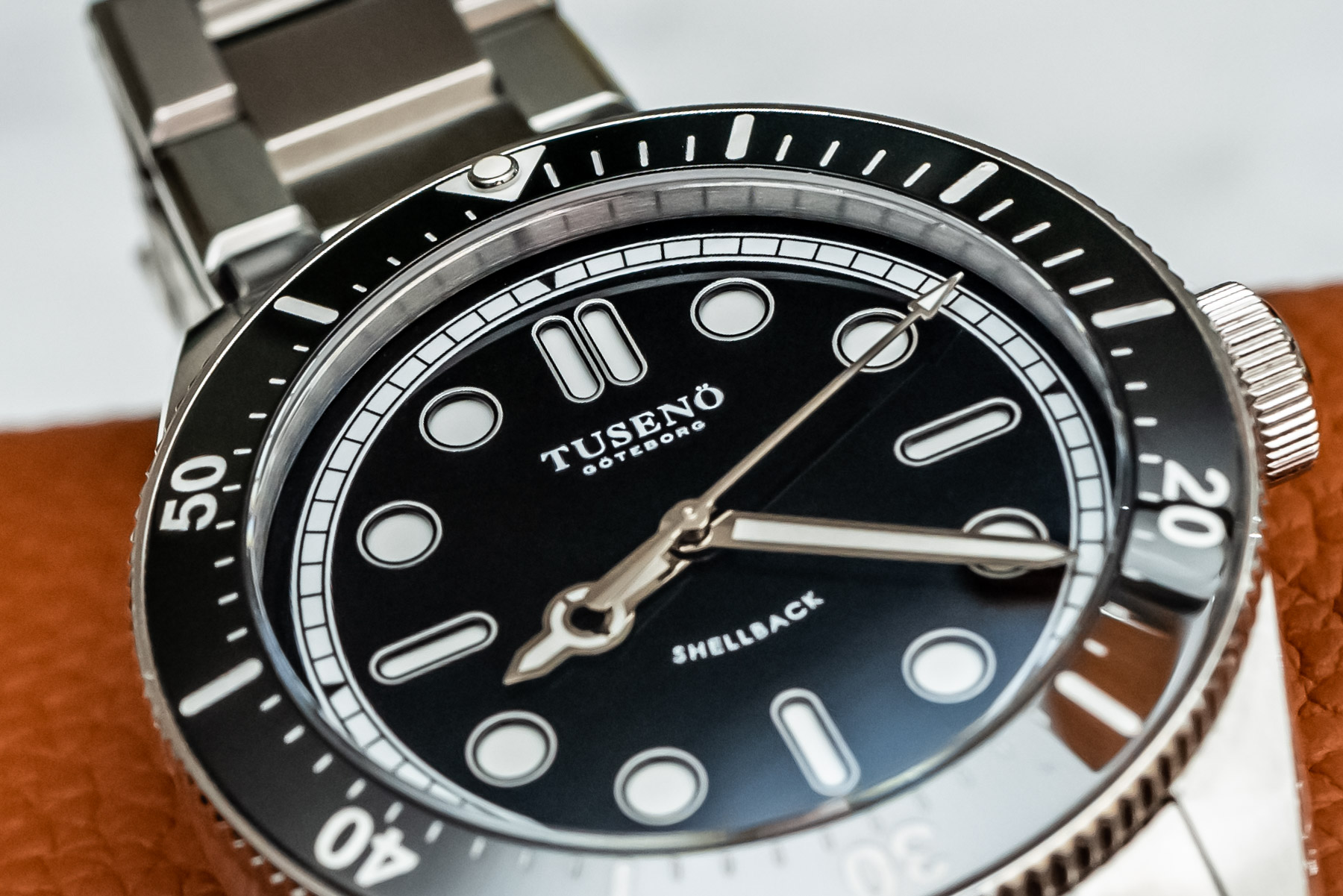 The Tusenö Shellback offers a lot of value and delivers some very thoughtful design touches that go beyond the surface classic dive watch aesthetic. Sure, Ronda automatic movements aren’t as ubiquitous as others, but I don’t see any reason to discount the Shellback for that reason. A Swiss-made watch with a Swedish sensibility, the Tusenö Shellback is available for an early price of $649 during the preorder phase, after which it will revert to a standard price of $795. You can learn more and preorder here at tuseno.com.