Hands-On With The Breitling Endurance Pro Watch For Athletes 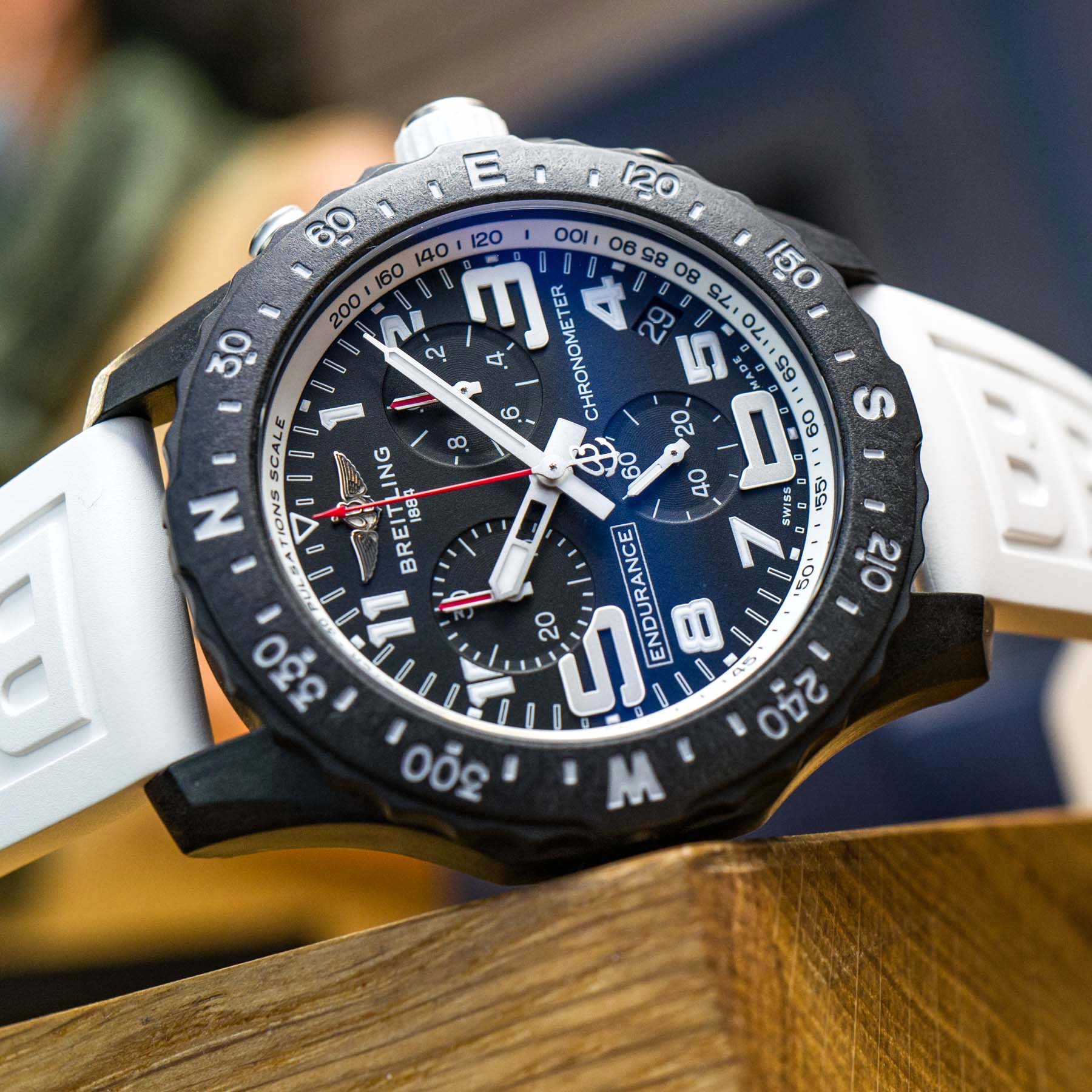 Whether you’re a fighter pilot, a civilian aviator, or just a dyed-in-the-wool tool watch enthusiast, there’s a pretty good chance that your first brush with Breitling was one of its Professional watches – a broad line of stylish quartz-powered references that has remained one of the brand’s core collections since its informal debut as the Aerospace in 1985. Over the last three and a half decades, the Professional umbrella has evolved dramatically, from the entry-level Aerospace to more feature-rich offerings like the rugged Chronospace, the state-of-the-art Exospace, and the mighty Emergency – a legendary adventure watch capable of summoning a helicopter (ie: the world’s most expensive Uber ride) for when things go really sideways. Given its cool, modern aesthetic and long legacy of highly accurate, multi-function utility watches, the Professional line is a natural home for Breitling’s new Endurance Pro – another category-specific tool watch, this time designed with athletes in mind. 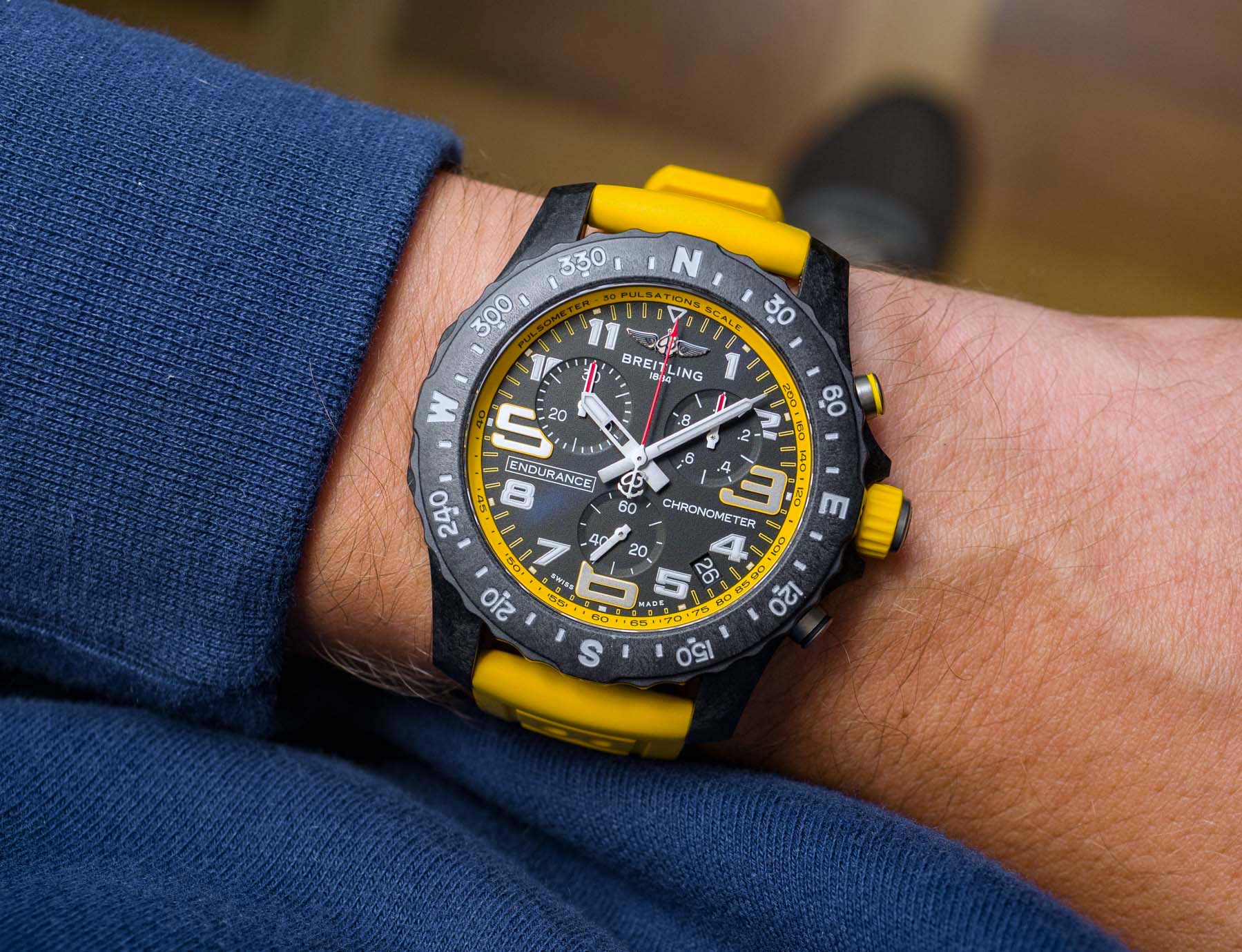 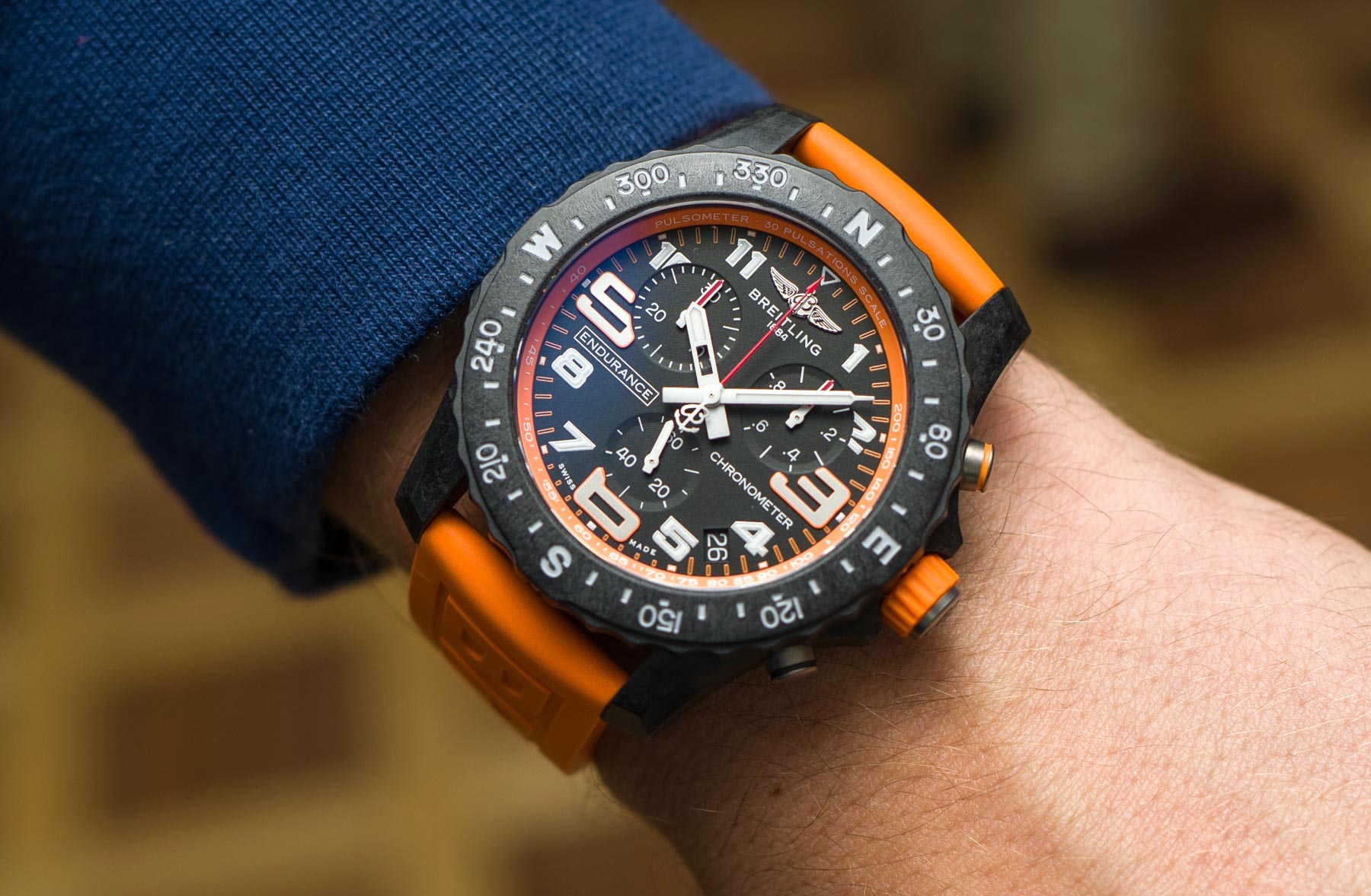 With regards to its Professional collection stablemates, the new Endurance Pro probably has the most in common in both proportion and functionality with the Chronospace Evo – a fully analog spin-off of the ana-digi hybrid Aerospace Evo. Though marketed at pilots, the modern Aerospace was already an excellent multi-sport & adventure watch (and a perfect cycling watch, I’ll add), thanks to its light weight, easy wearability, and multiple functions. The new Endurance carries that torch, reportedly with design input from Breitling ambassador and three-time Ironman World Champion Jan Frodeno, yielding a reference that mixes in a few new elements, including a Breitlight carbon fiber composite case that’s 30% lighter than titanium, a bi-directional rotating compass bezel (likely cribbed from the Chronospace Military), and a subtly updated aesthetic, which appears to be reflecting the new art direction for the Professional collection as a whole. 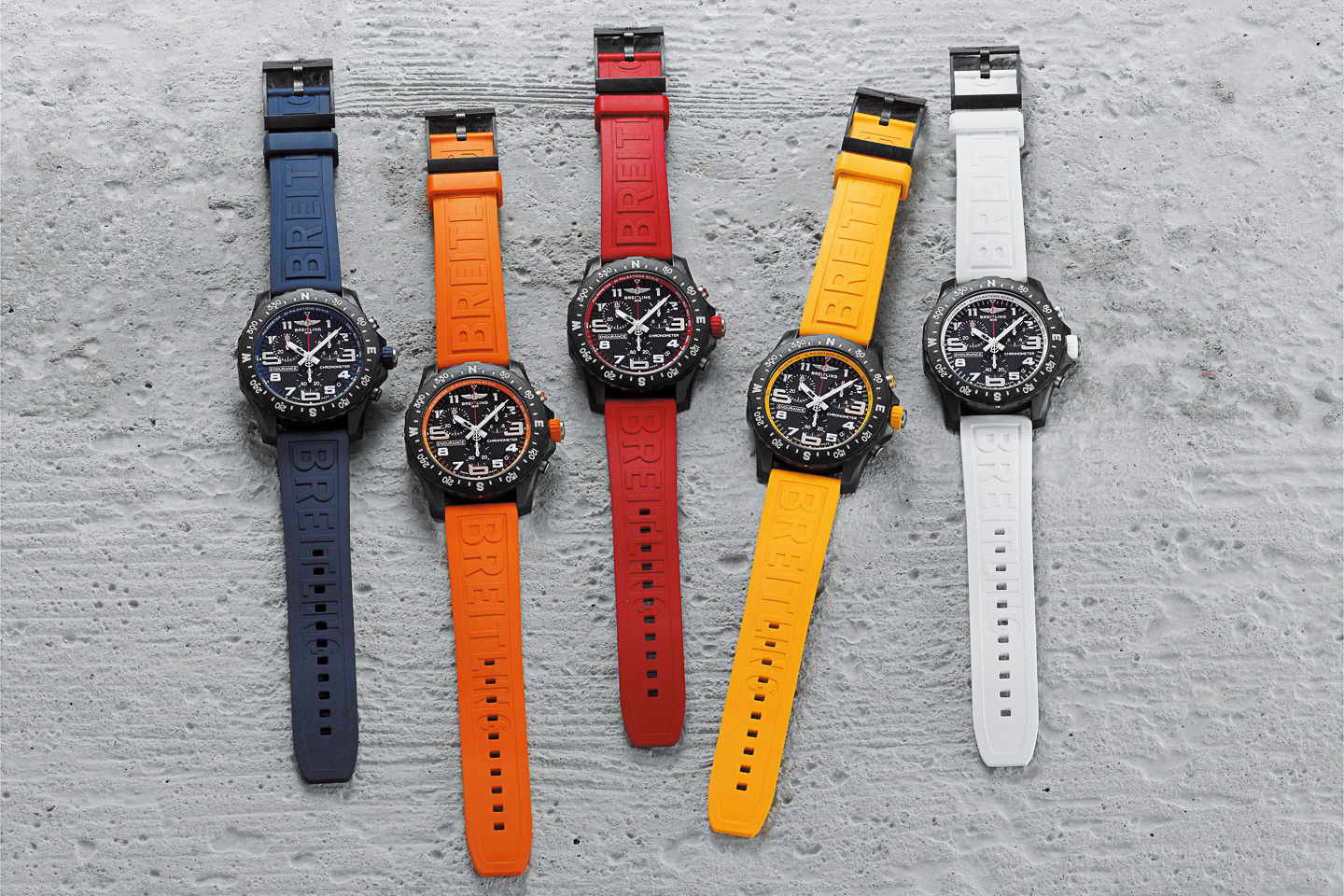 Now it doesn’t matter if you’re a professional athlete like Frodeno or a fitness enthusiast logging miles between a regular nine-to-five, if you run, swim, or ride bikes and appreciate watches, you already know that finding just the ‘right’ watch to keep you on-time and your wrist tanline dutifully maintained during training season can be a tricky affair. An oversized dive or pilot watch might have the shock countermeasures requisite to keep an automatic movement running accurately, but these larger designs often trade legibility for weight – and a distracting, top-heavy watch is hardly the right choice, especially during longer or harder efforts. Conversely, though a cheap, battery-powered watch might be the safest concession (especially in the instance of a crash or a fall) in this instance, it undoubtedly lacks that certain ‘je ne sais quoi’ that many athletes seek out when it comes time to personalize their gear or riding kit. 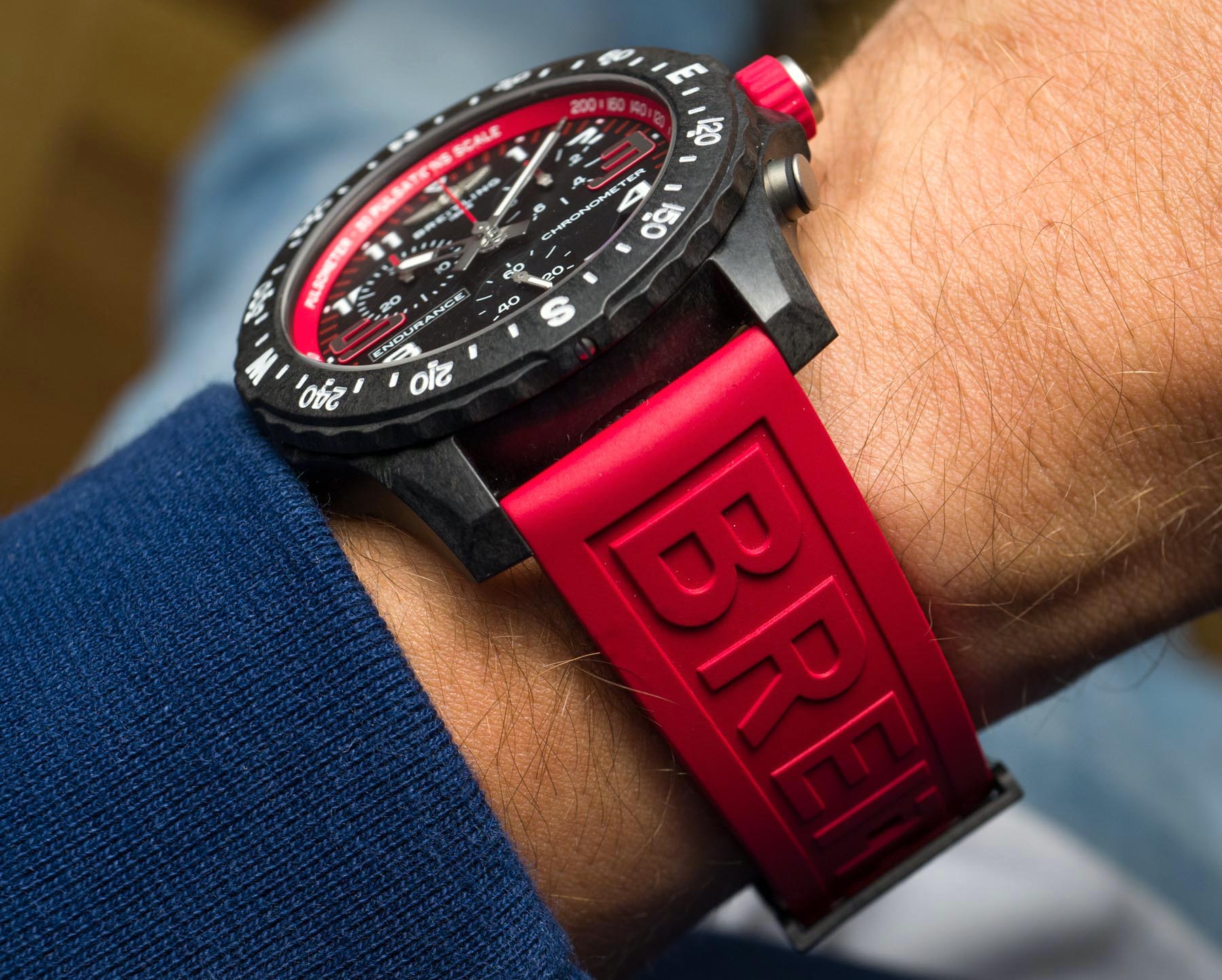 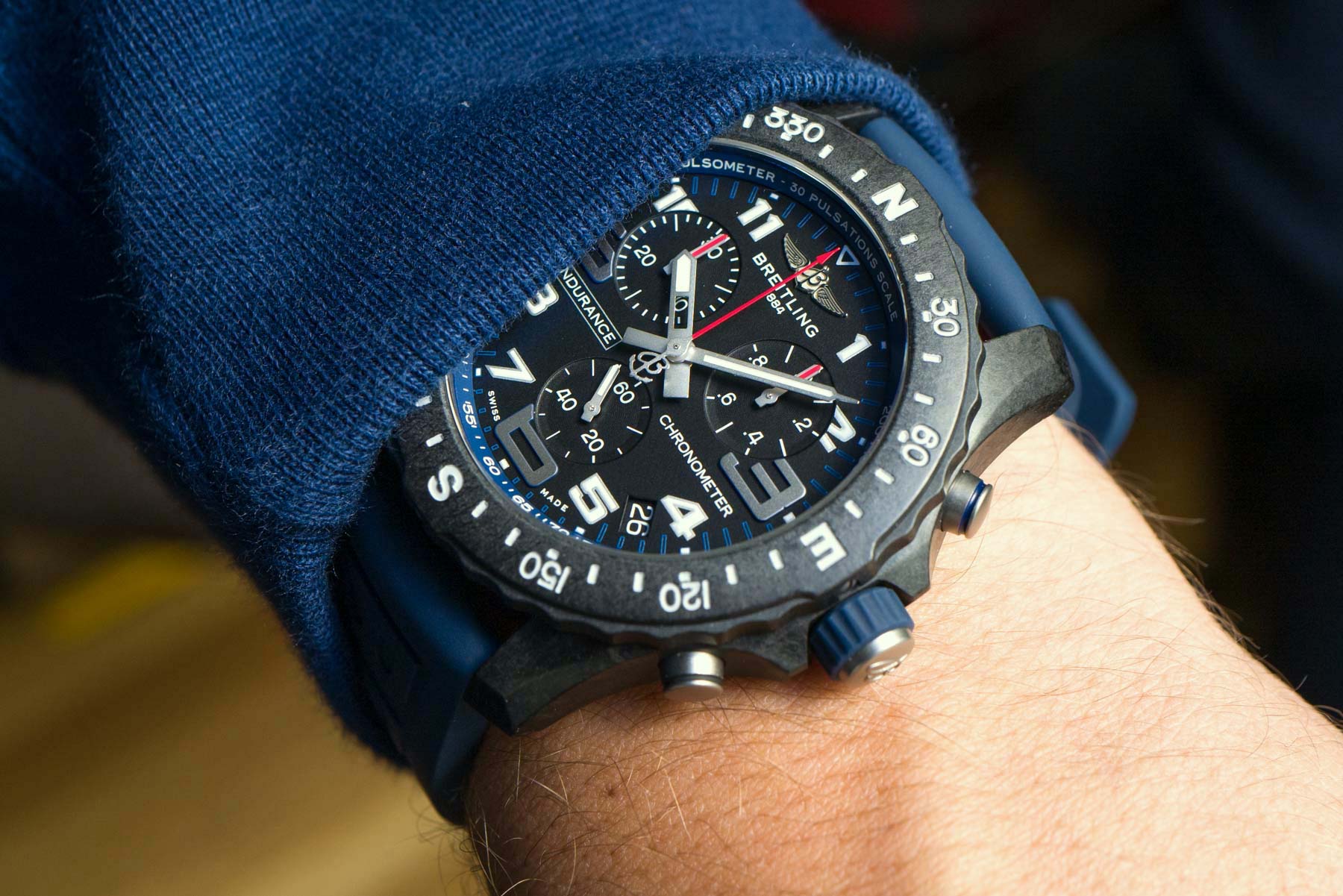 Obviously, most professional athletes tend to train or race with GPS-enabled digital devices that measure efforts and comprehensively track workout data, but just as a professional divemaster might wear a digital dive computer on every outing, the Endurance isn’t meant to replace such a device, it’s meant to supplement it. By the same token, I ride with a Wahoo Roam, which displays power, heart rate, VAM (when climbing), along with distance and elevation metrics, but I leave the day’s timekeeping to the wrist, as I simply prefer to wear a watch. Plus, I’ve had head units die on me while out on a ride, and at least being able to get home in time for brunch is never a bad thing. Two is one, and one is none, right? 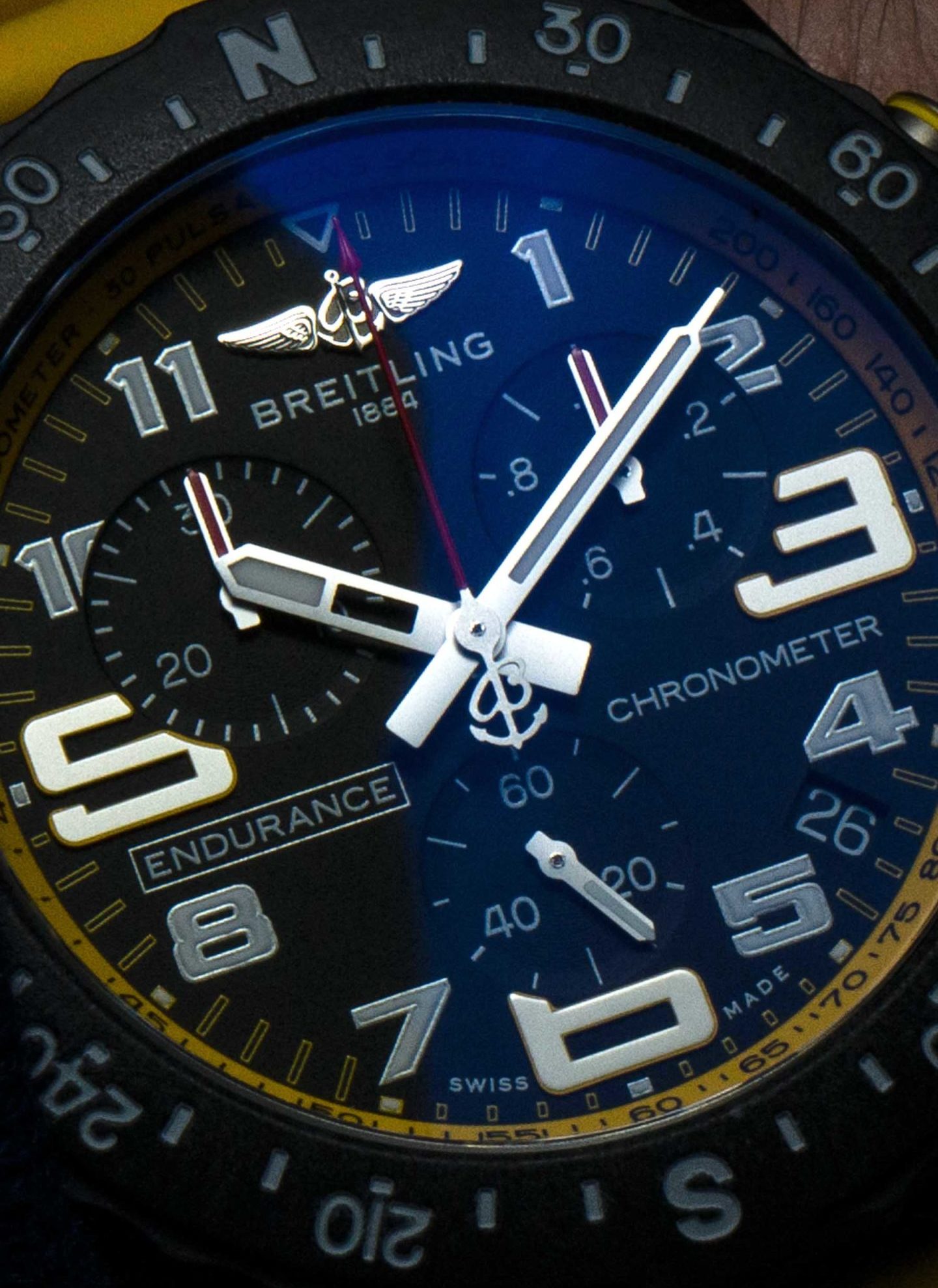 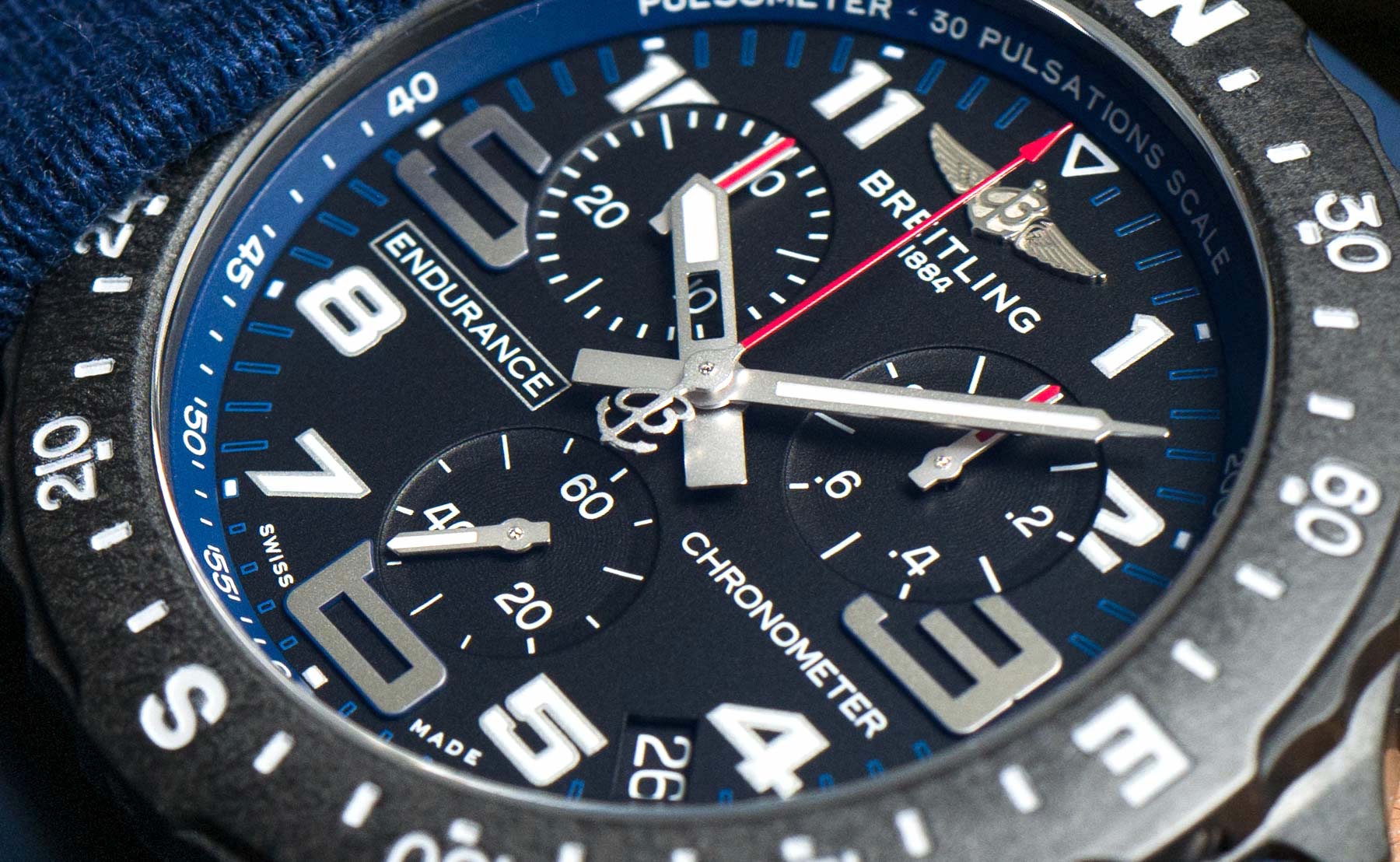 Ultimately, I’m particularly impressed that Breitling has actually touched on the elements of not just what makes a sports watch cool, but one that’s actually useful in practice – y’know, as a sports watch. In keeping with the traditions I’d come to expect from Breitling, it’s detail-rich, quite masculine by design, and extremely well made. And in the same traditions, it’s also large and legible at a glance, but hardly unwearable – thanks to the impressive lightness of its 44mm x 12.5mm Breitlight case, which weighs a scant 35 grams without its rubber strap (funnily enough, the strap weighs about the same, adding 30 grams to the total package). And it’s powered by a quartz movement – which, though perhaps not the first choice for many watch enthusiasts, is actually in practice, a much safer and more accurate option from workout to workout. 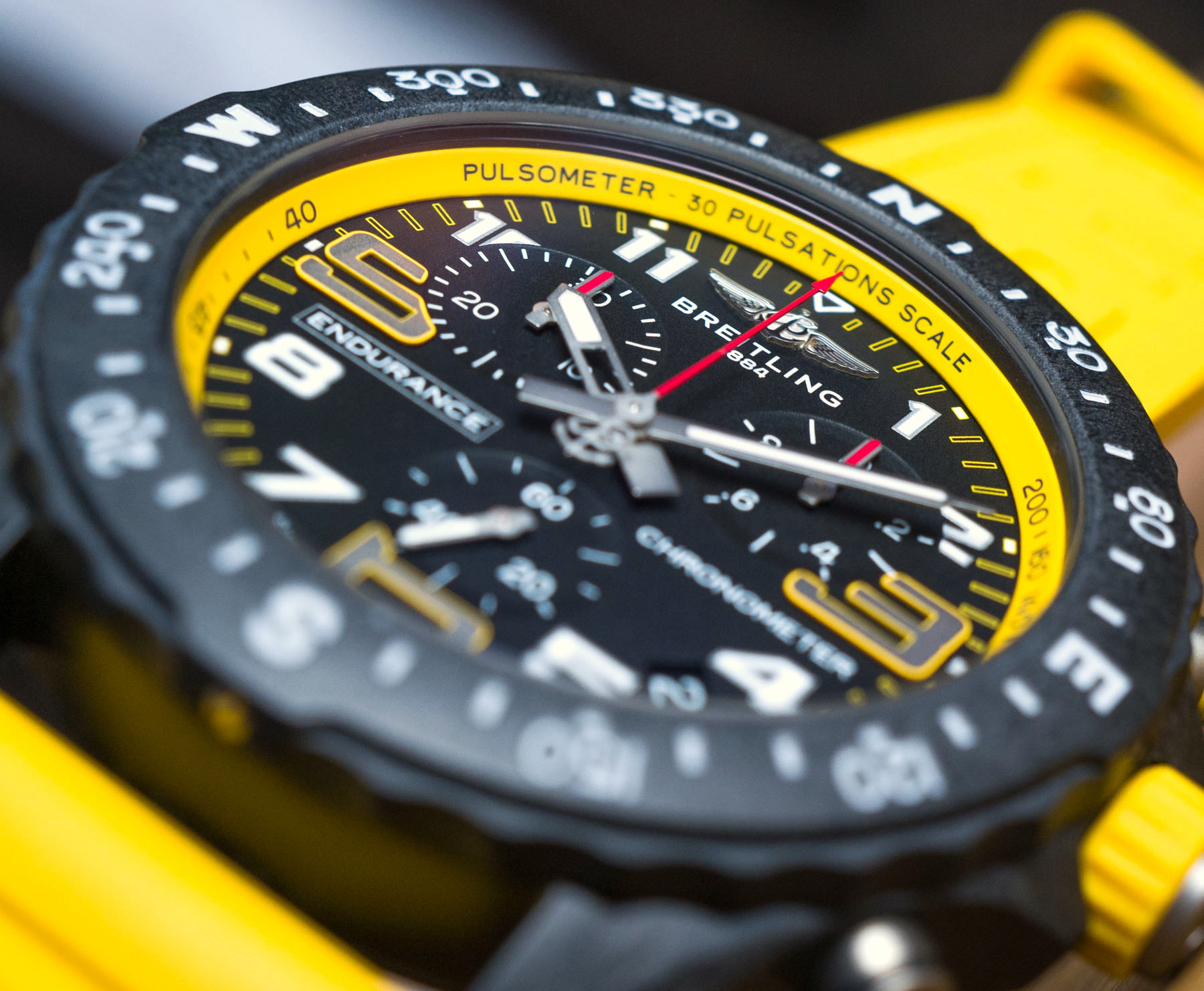 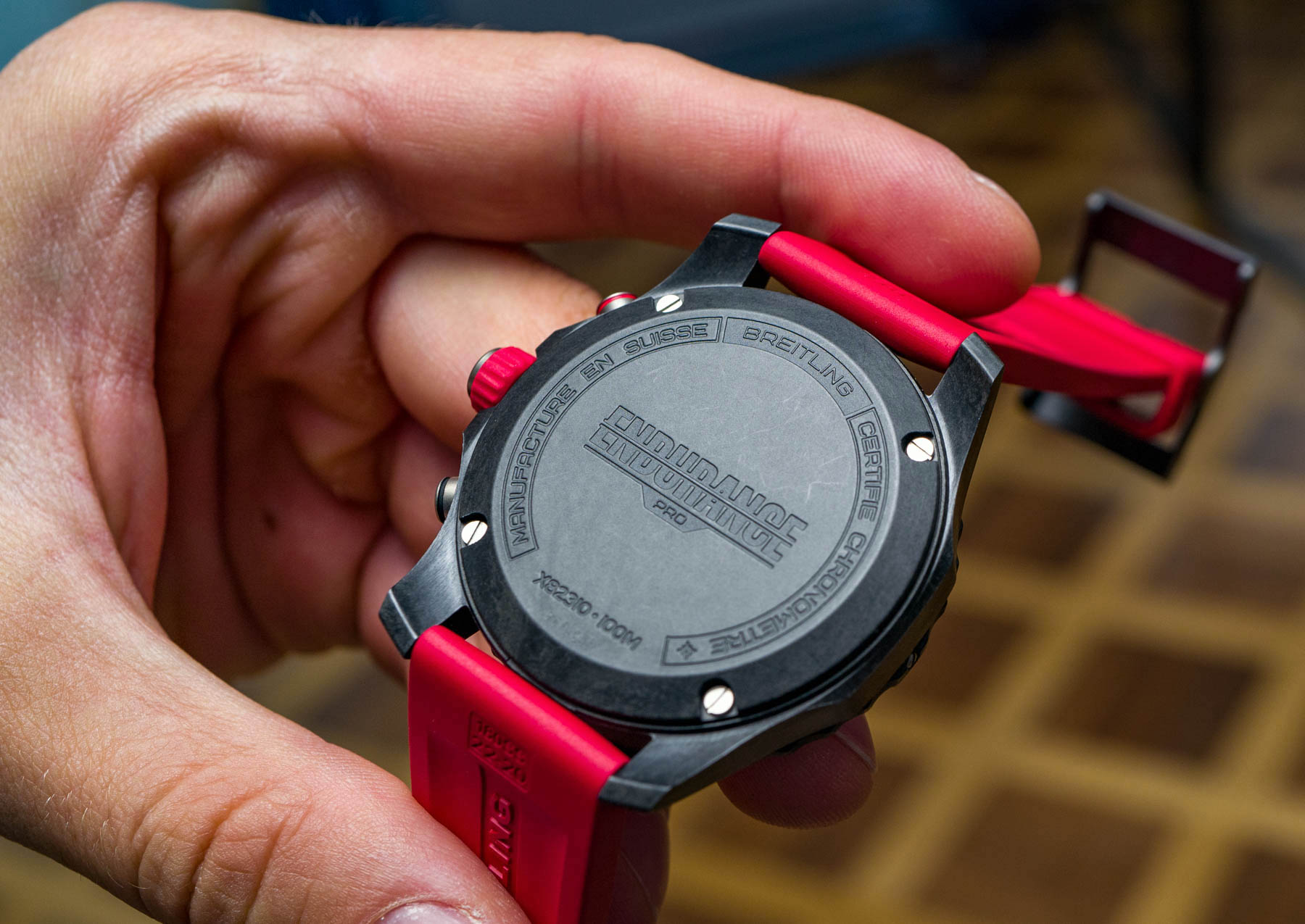 Piggy-backing off the Chronospace Evo, the movement in question deployed for the Endurance is an in-house manufactured 1/10th of a second quartz chronograph calibre, though unlike the aforementioned, the Endurance uses Breitling’s Caliber 82, which trades the Evo’s 24-hour register at 9:00 for a 30 minute counter. This is a thermo-compensated, COSC-certified Chronometer movement, and it’s awfully nice to see some brands still catering to HAQ (high-accuracy quartz) watch fans – in addition to the athlete community. 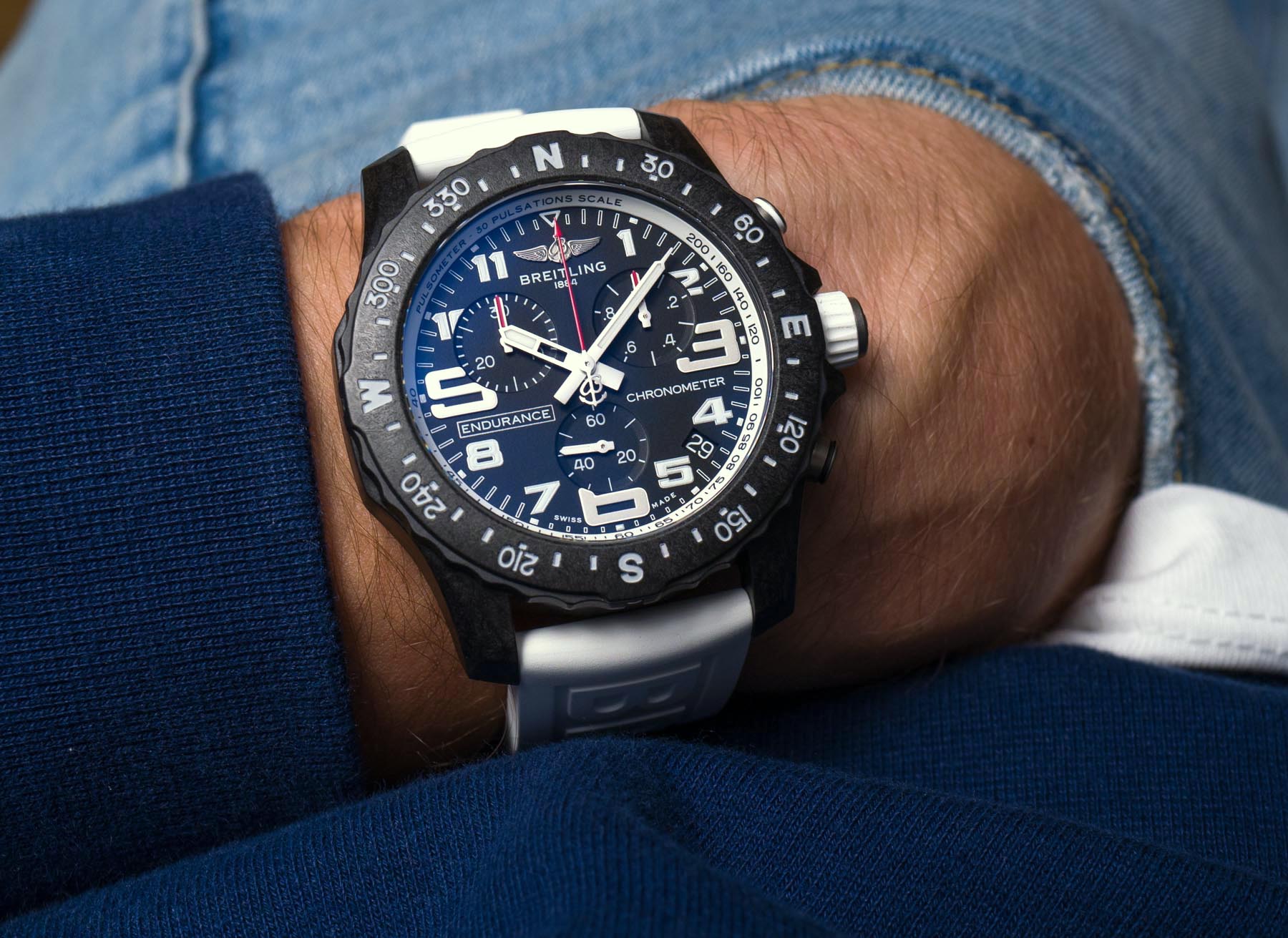 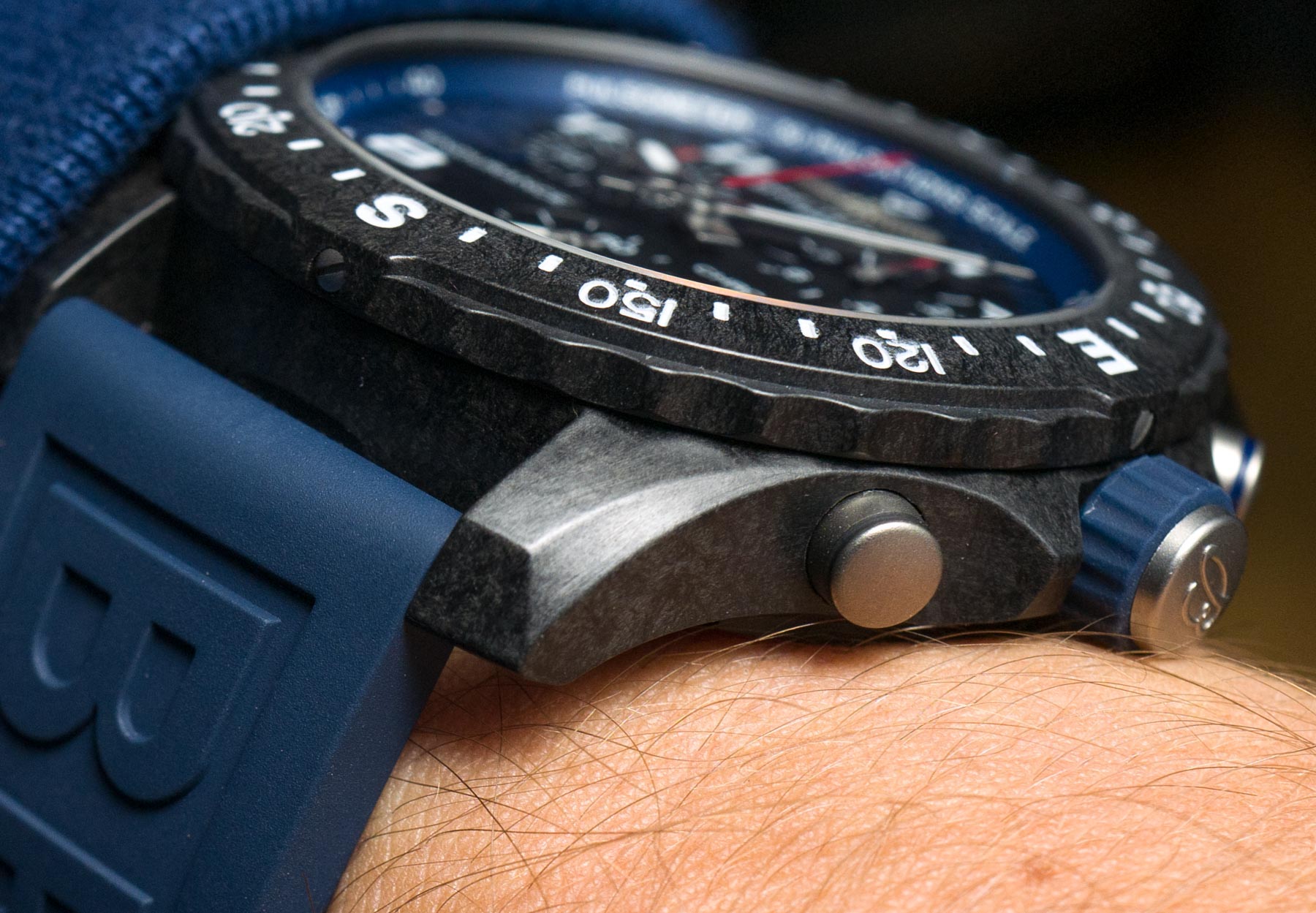 Like the rest of the Aerospace Evo collection, the new Endurance is water resistance to 100 meters, making it plenty sweat and swim-resistant for any workout. And with a 22mm lug width and a 52mm lug-to-lug measurement, it also has a near-identical footprint to the existing Aerospace, though the sculpted lines on the case are a lot more refined, with deep, twisted lyre style lugs that create a cool beveling on the 9:00 side of the caseband. And thanks to the subtle patterning of the Breitlight material, the whole case has a very warm and organic look and feel on the wrist – an effect that’s contrasted beautifully by bright pops of blue, yellow, orange, red, or white. Other embellishments like the crown’s grippy rubberized surface, the steeply sloped pulsometer chapter ring (a fun touch, though I can’t imagine any serious athlete discarding their Whoop for this), and the gold-hued 3-6-9 & Breitling wing elements all lend a very cohesive, premium feel that I can only best describe as ‘distinctly Breitling.’ Speaking of which, the lone design criticism I could probably levy at the new Endurance, is with the applied 3-6-9 markers. These have long been one of my favorite stylistic flourishes of the Professional collection, and cutting each of them off to make room for other dial elements feels a bit like design heresy. 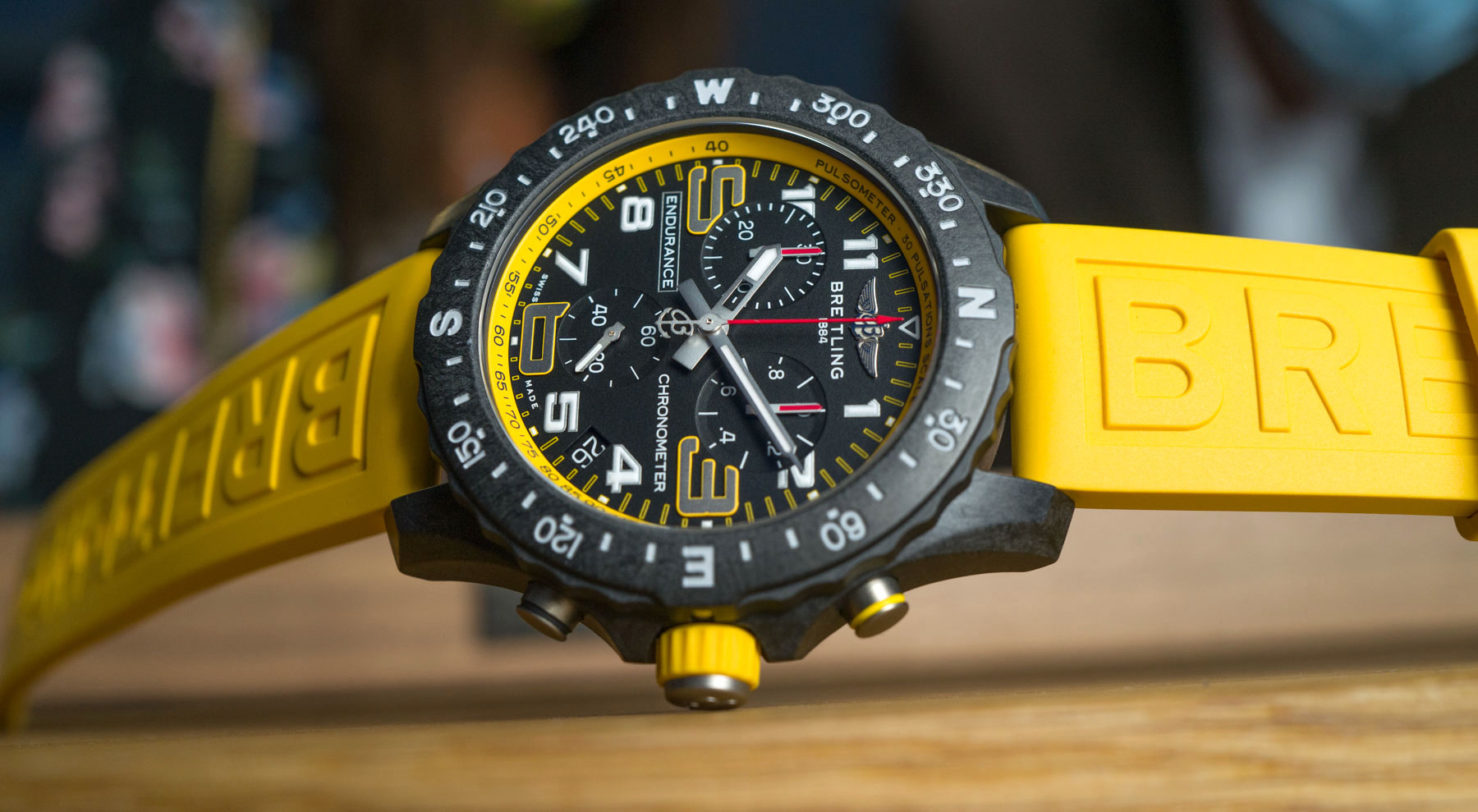 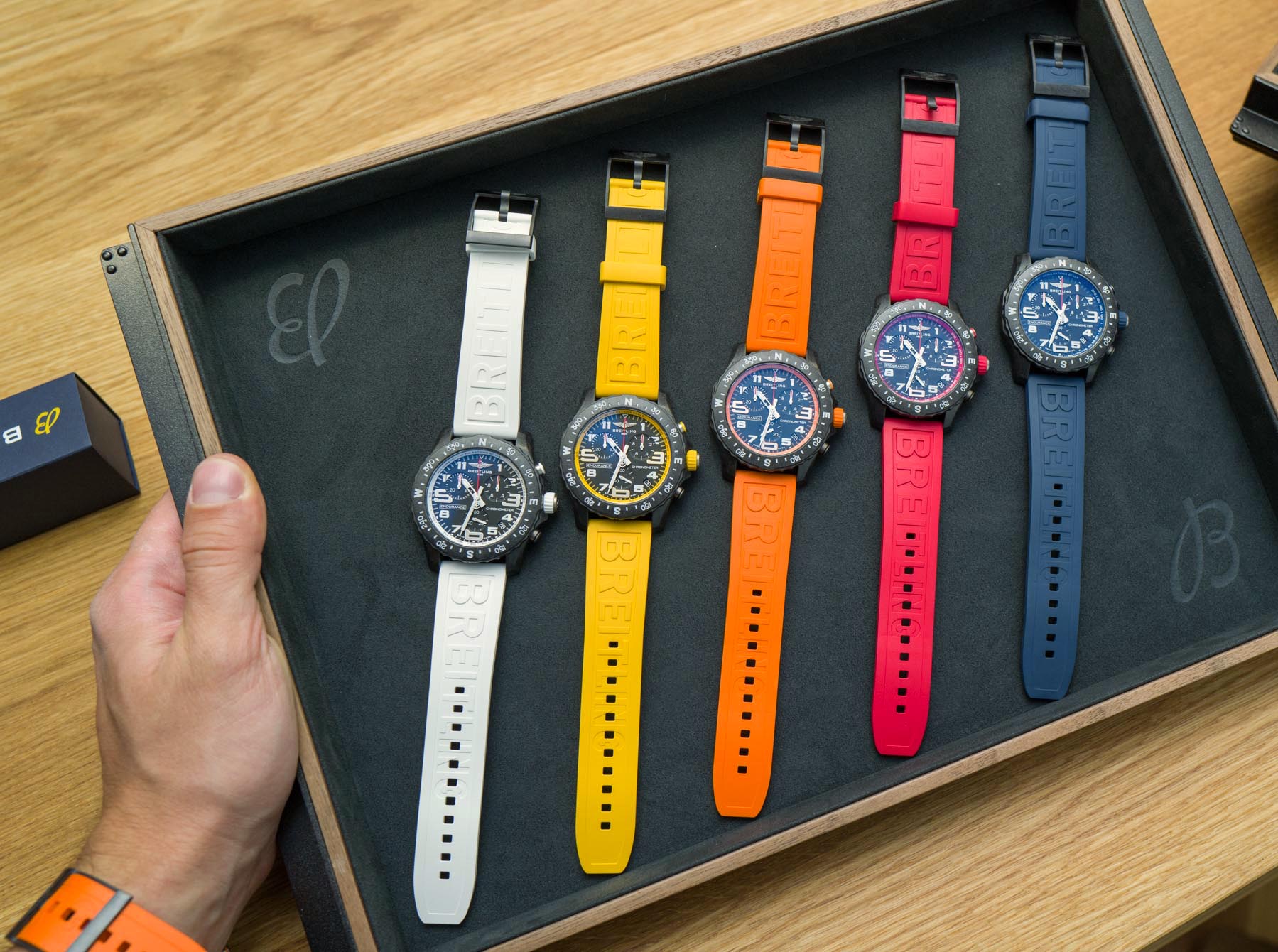 Available in a multitude of colorful strap and dial options, and built around an ultralight composite case, the design brief for the Endurance feels a bit like it’s paying homage to the original fiberglass-cased TAG Heuer F1 watches from the late eighties which were also marketed for sporting use. In many ways, this particular reference was the first Swiss watch for an entire generation of cyclists, who might remember them being worn by the stars of the American 7-Eleven cycling team, like Bob Roll, Davis Phinney, and Andy Hampsten. Unlike the rather crude F1 watches (nostalgic as they may be) though, the Endurance is a sleek, premium, and far more modern affair that strikes just the right balance between style and utility. And with a price of $3,000, it’s certainly not an inexpensive choice, but it’s a markedly more practical, period-correct option for watch fans looking for the perfect ride companion for that new Tarmac SL7. breitling.com

For the next two weeks, the global athlete community can participate in Breitling’s Endurance Pro Challenge on the fitness app Strava, with the aim of completing 500 minutes of any sporting activity (running, cycling, swimming, or any combination are all fair game) in the two weeks following the time of this writing, to be put into the *ahem* running to win a Colnago bike, a Breitling Endurance Pro watch, and a Breitling cycling kit. Why 500 minutes? Well, it’s a little essentially an eight-hour window, and around the same amount of time it would take an elite triathlete to complete an Ironman – luckily, you’ll be able to break it into as many sessions as you need, such as long as you’re done in the 14 days following the 26th of August. Breitling’s own professional athlete squad, including three-time Ironman World Champion Jan Frodeno, and multiple cycling Grand Tour winner Vincenzo Nibali will both be participating in the challenge.
Advertising Message