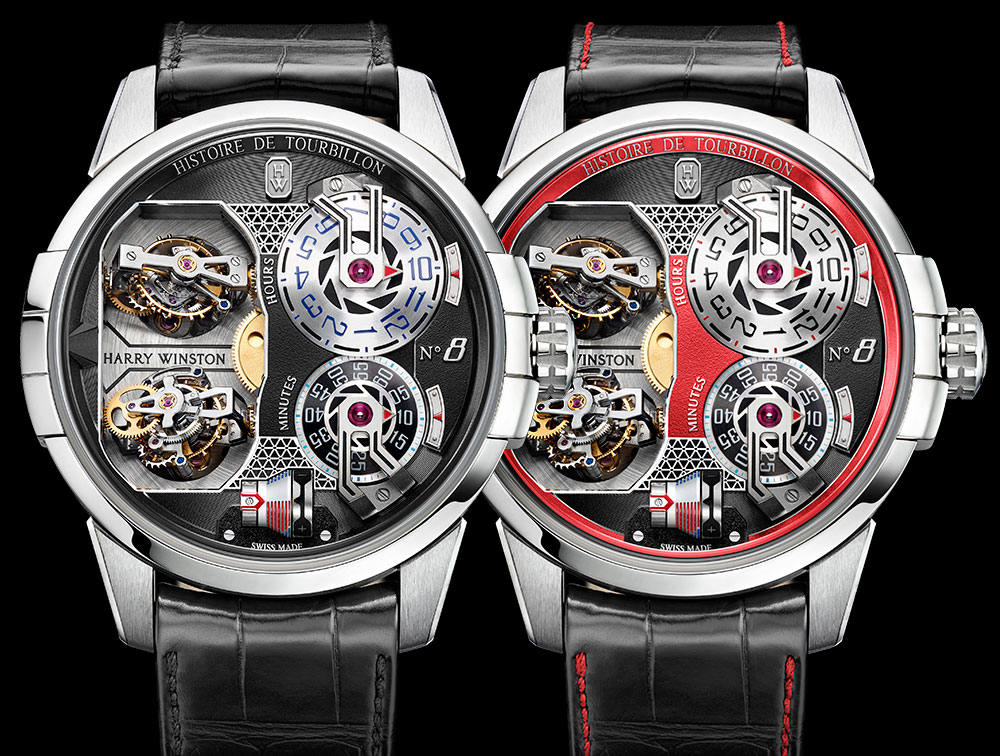 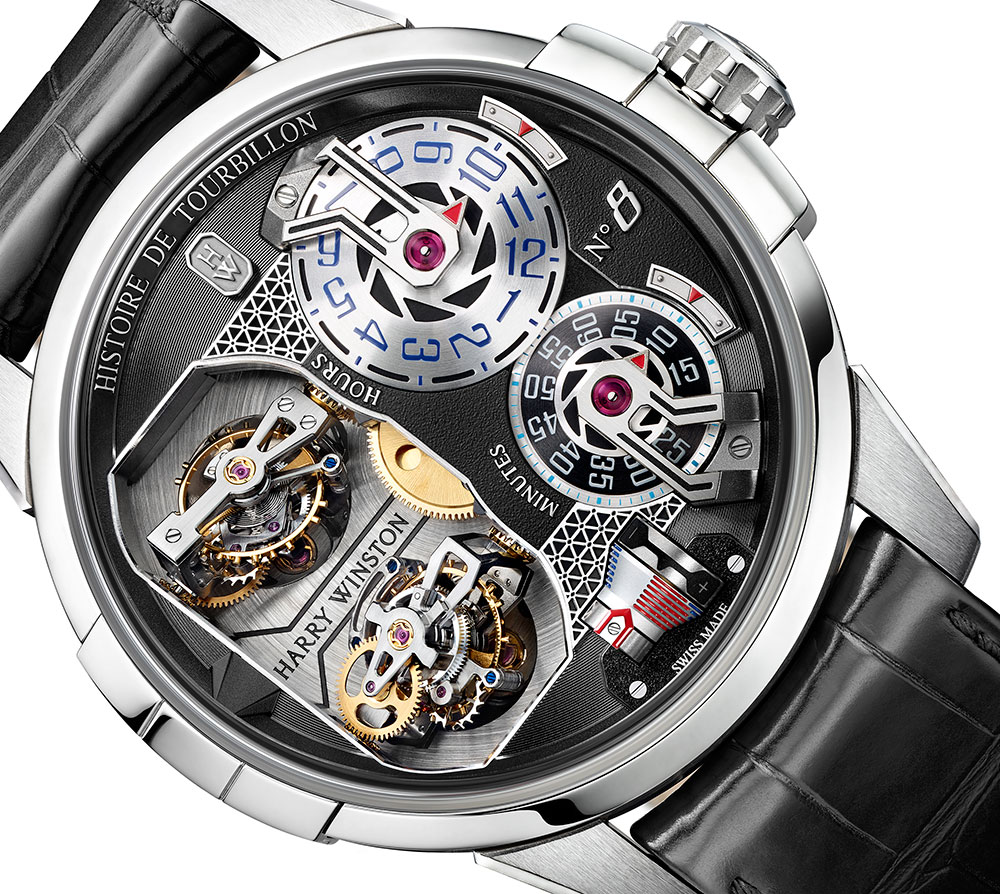 Just when we gambled that Harry Winston might not be able to outdo its mind-boggling Histoire de Tourbillon 7 released last year, the renowned jeweler has just announced the Histoire de Tourbillon 8 – the latest in an ongoing series of tourbillon watches whose degree of complication and unconventional design seems to grow exponentially with each new addition. However, while each new entry had somehow managed to up the ante, the HDT 8 seems to recycle the bi-axial tourbillon complication of its predecessor, while now offering up a new time display with jumping hours and minutes, and some other aesthetic tweaks. It’s far less of a radical update to the HDT series than we’re used to seeing but remains impressive for the same reasons. 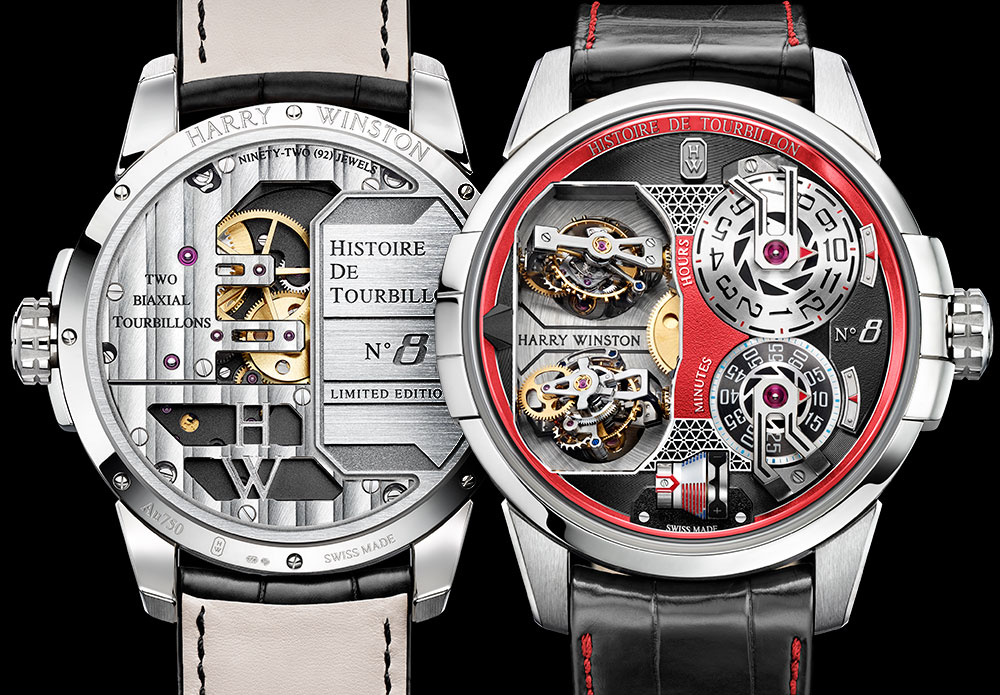 Now, before we get too deep into the inner workings of the Histoire de Tourbillon 8, it’s worth pointing out the obvious that Harry Winston might be more associated with jewelry than ultra high-end watchmaking in the minds of many. To be fair, the man (and more recently, the brand) has historically spent more time in the headlines as the jeweler of choice for the Hollywood elite, as well as former or current owner of some of the world’s most famous gemstones. The latter includes the 726-carat uncut rough diamond named “Jonker” in the mid-1930s, then the Hope Diamond in 1949, and more recently, the flawless 101.73-carat Winston Legacy. Within that timeline, Winston began selling watches in the late 1980s, but things really didn’t start to ramp up in complication until the brand opened its own manufactory in Geneva in 2007, and subsequently began producing the impressive high-complication series like the Histoire de Tourbillon, which we’re more than happy to gawk at today. 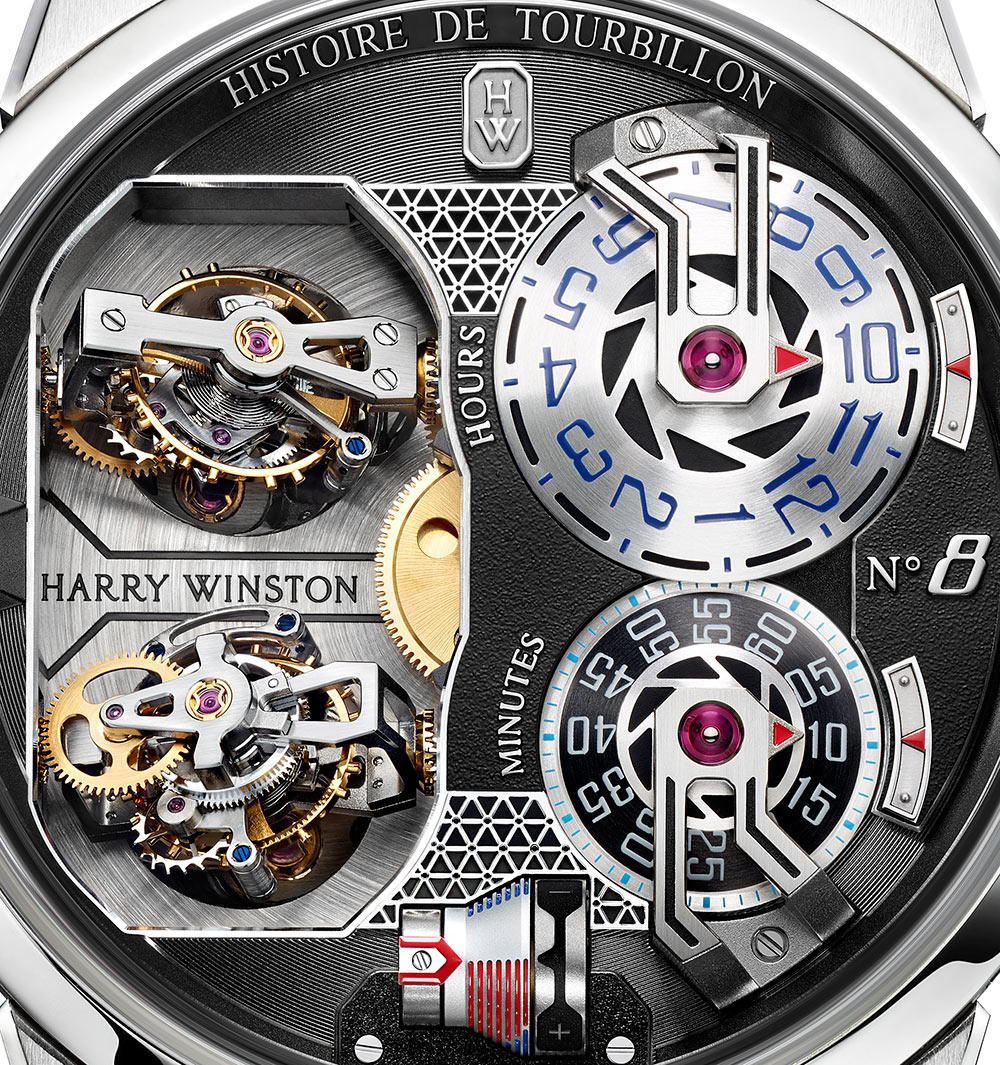 And speaking of gawking, there’s more than an eyeful to go around with the Harry Winston Histoire de Tourbillon 8 as you take in the twin bi-axial tourbillons. Now, as mentioned, this is the same complication that punctuated the previous HDT entry, but it’s back with a twist. In place of the traditional two-handed time display at the 3:00 side of the dial, we have a pair of rotating discs – hours at 1:00, and minutes at 4:00, which “jump” as each hour and minute clicks by. 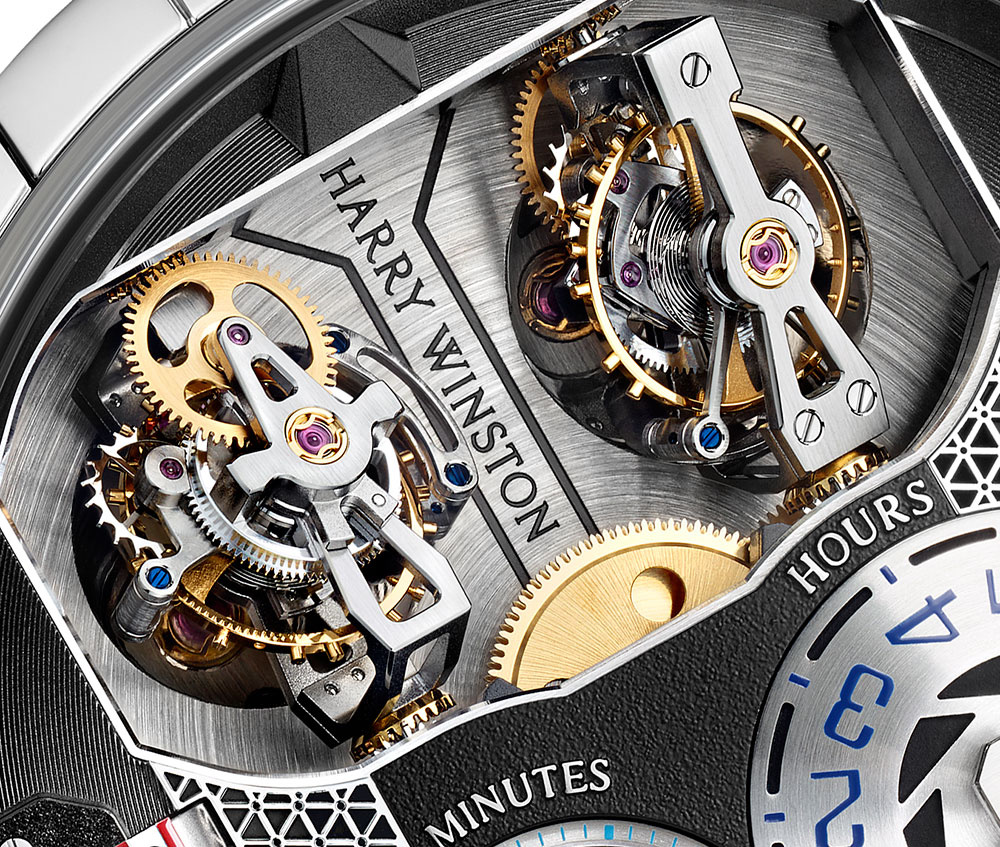 But the real story here, as it was with the HDT 7, is the twin tourbillons. Granted, little has changed since we last saw them – but the execution is still mind-bendingly complex, and a treat to behold, particularly when juxtaposed against a less traditional timekeeping display – an aesthetic that seems to more neatly fit the overall nü-industrial vibe of the watch. To the left of the time display dance the tourbillons – each of which completes a rotation on a 30-degree inclined axis. Nestled between that rotational movement, a second cage turns on its own axis, completing a rotation every 45 seconds. Within the latter, the balance wheel maintains a steady tempo of 21,600vph, throughout the watch’s power reserve of around 55 hours (indicated by the cone at 6:00).

The whole concept behind a tourbillon itself is to minimize gravity’s influence on the balance wheel, by actively subjecting it to the widest variety of movement positions possible. By putting the tourbillon on a second axis, and then doubling the complication itself, the balance wheel is placed within an exponentially greater number of positions, thereby theoretically yielding an even higher level of chronometric performance. 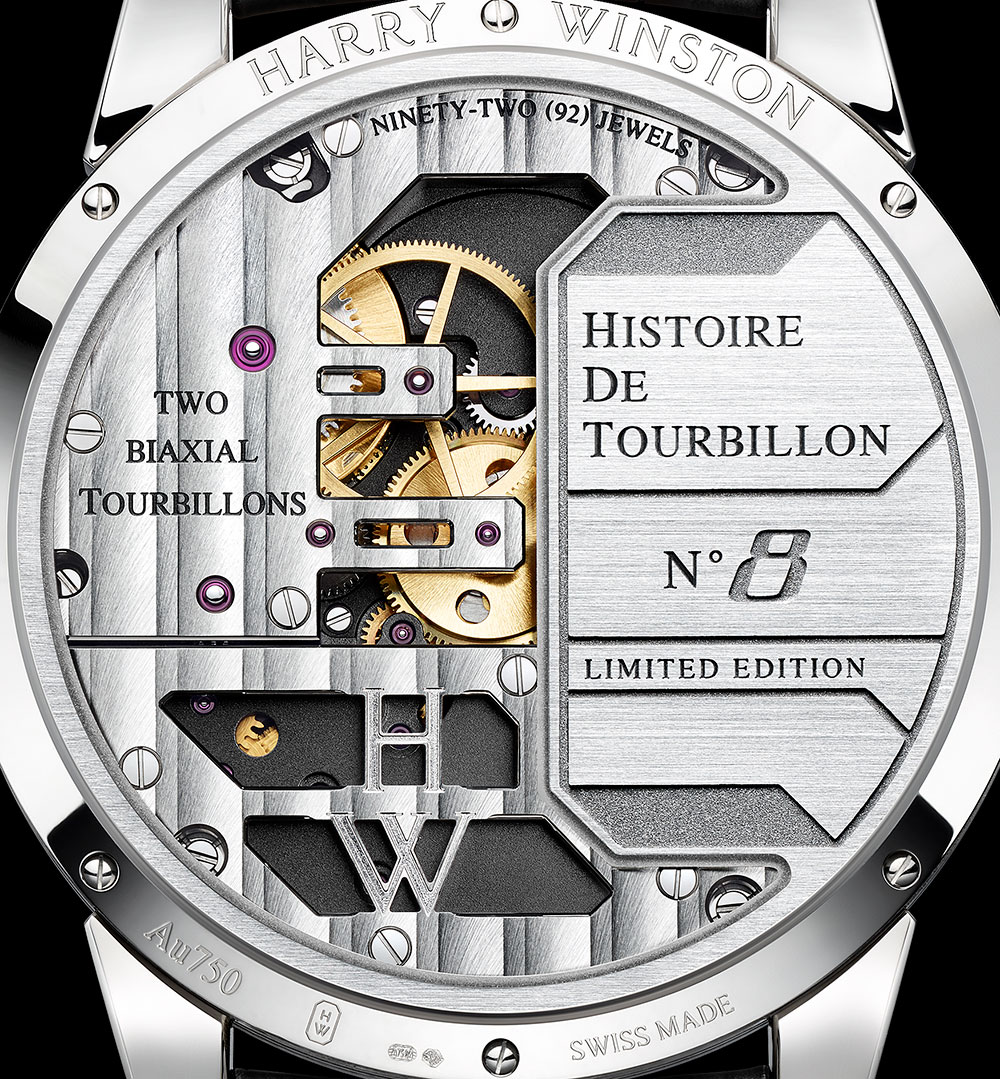 What makes the wizardry of the Harry Winston Histoire de Tourbillon 8 so interesting, though, is not just that we have two independently operating tourbillons, both operating on two axes each, but that their mechanical operation results in a single time measurement. To ensure the accuracy of this single measurement, the HDT 8 employs a spherical differential, which maintains an average between the two – an average which is displayed in the form of the time to the right of the dial. 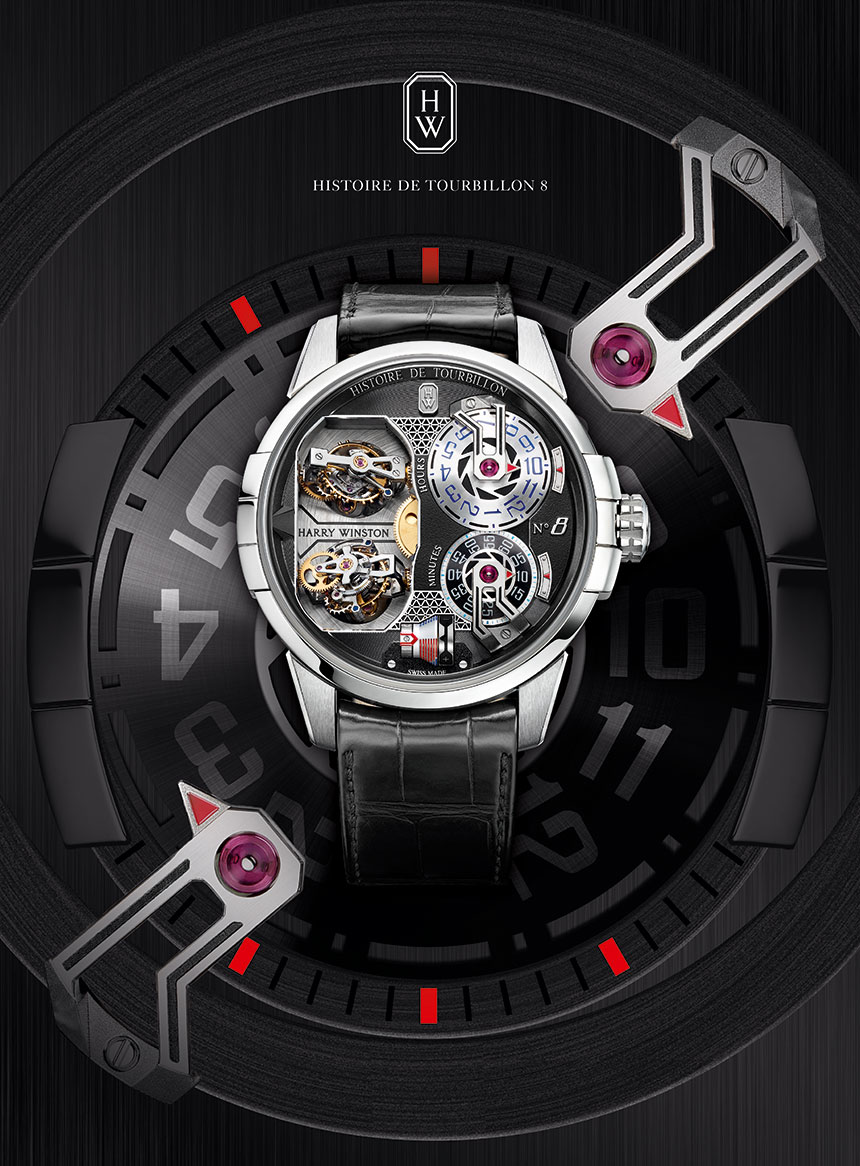 The case of the HDT 8 itself is made of white gold, the rotating time discs from aluminum, and the tourbillon cages and movement bridges from titanium. Dimension-wise, the Harry Winston Histoire de Tourbillon 8 carries its case sizing over from the HDT 7, which is by no means small: 51mm by 17mm. But bear in mind that the calibre HW4503 that houses the twin tourbillons (each of which contains 117 components alone) is 43mm on its own. Large? Yes, but at least there’s a justifiably large amount to look at here, even if it’s a far cry from being legible. In addition to the tourbillons dancing the hours away, the dial itself is a sight to behold – comprised of a single component with 13 different textured elements. Each of these textures is executed through a different finishing technique – from sanded, grained, and satin textures, to the complex honeycomb and engraved script pattern at 12:00.

Only twenty pieces of the Harry Winston Histoire de Tourbillon 8 will be produced (ten with the red dial, and ten in anthracite grey). We don’t yet have a confirmed price, but if the HDT 7’s $600,000 price tag was any hint, expect those twenty owners to be extremely well-heeled indeed. harrywinston.com